Review sample provided by Bluefin Distribution. Get yours at BigBadToyStore!

Although other versions of the Moon Stick have been released, Bandai recently released what they are touting as the most accurate version of this iconic weapon. Bandai’s new Moon Stick is a 1:1 scale prop replica, hence the “Proplica” moniker for this new line. 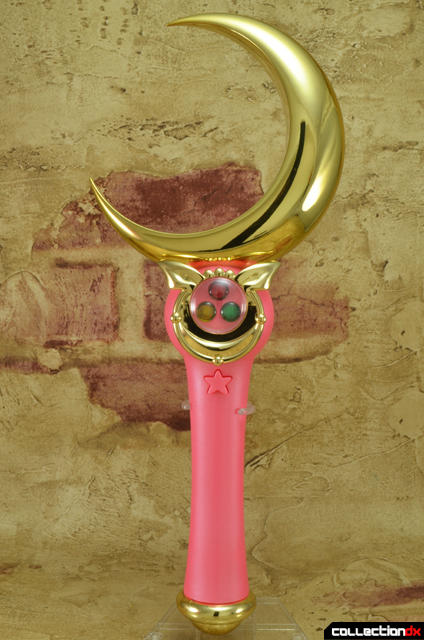 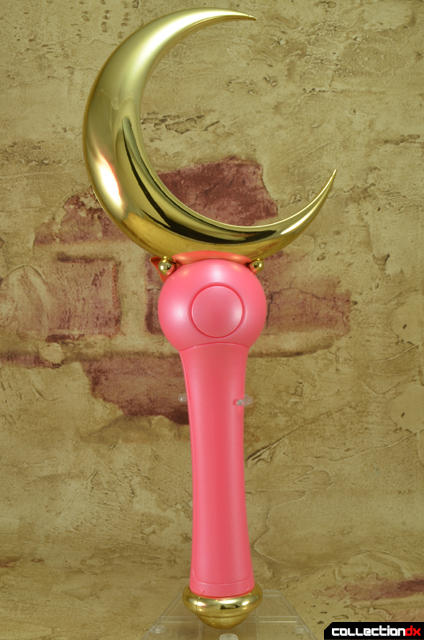 The Moon Stick is a weapon with a simple design. The previous toy versions of the Moon Stick, which were released a while back, took some liberties with the design in order to make it look more ornate. But this time around the name of the game is show accuracy and the Proplica Moon Stick does a good job at capturing what this weapon looks like in the anime. I think the only thing that would have made this more screen accurate is if the Moon Stick had a longer handle.

In the Sailor Moon series, the Moon Stick was upgraded with the addition of the Silver Crystal. The Proplica Moon Stick includes a Silver Crystal, which can be attached onto the Moon Stick by removing a circular cover piece inside of the moon crescent. You remove this piece by pressing the buttons that are concealed at the base of the crescent moon. 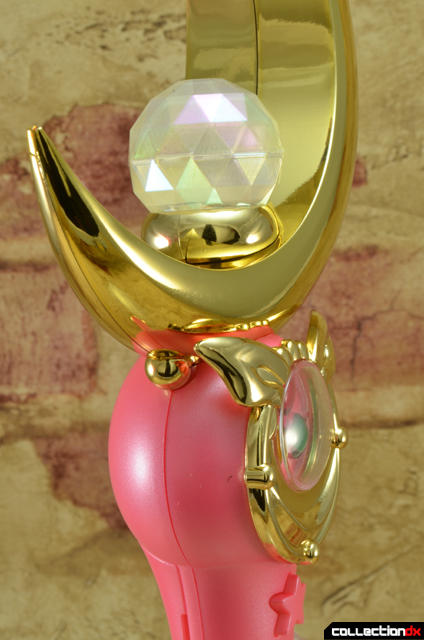 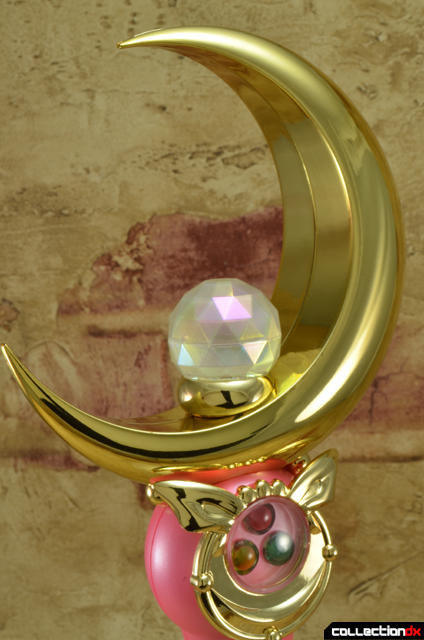 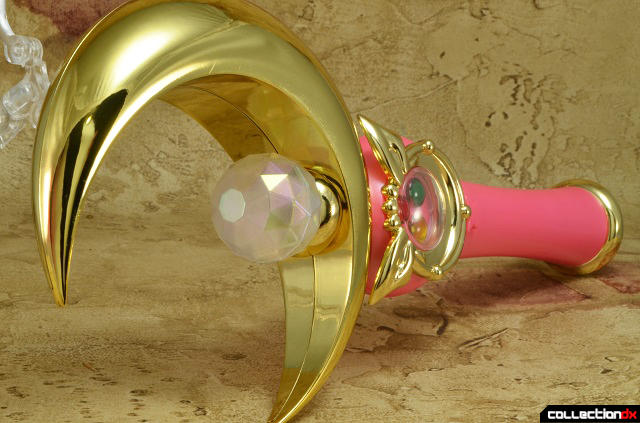 That buttons for releasing the golden cover/ Silver Crystal are not the only functional parts of this toy that are concealed for maximum show accuracy. 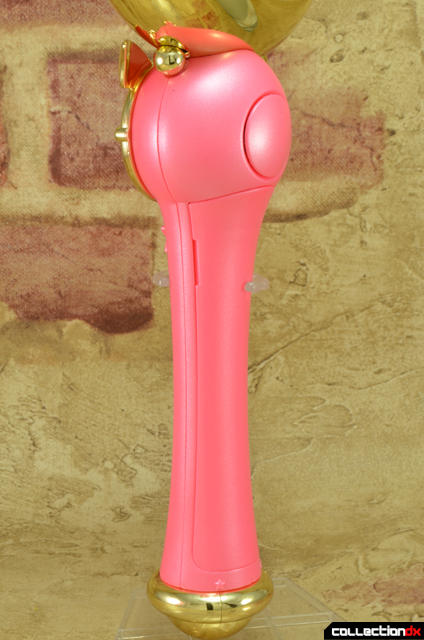 The battery compartment is also nicely hidden on the body of the Moon Stick. 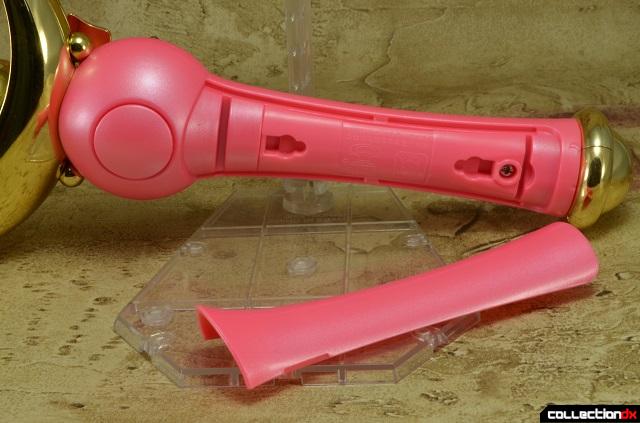 Also, the speaker for this Moon Stick is better hidden than the previous iterations of Sailor Moon’s iconic weapon.

See the speaker compartment? No? 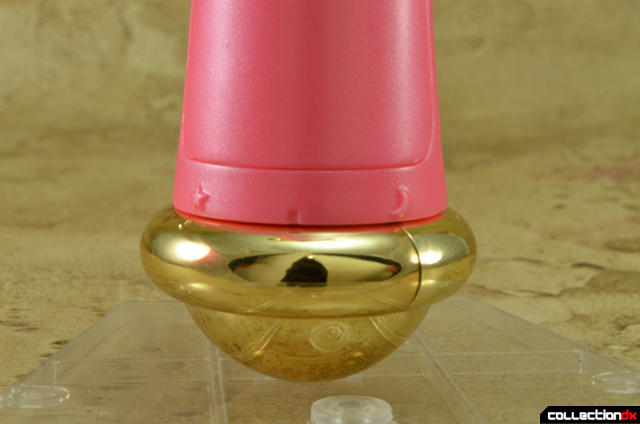 The “on/off” switch actually the chrome piece at the bottom of the moon stick. It has three settings: star mode, off and moon mode.

The Moon Stick features 4LEDs that light up when you press the star button on the handle. There are 3 LEDs  inside the golden crest. 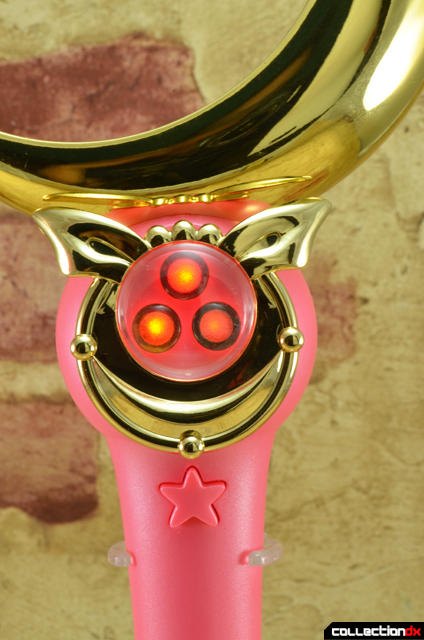 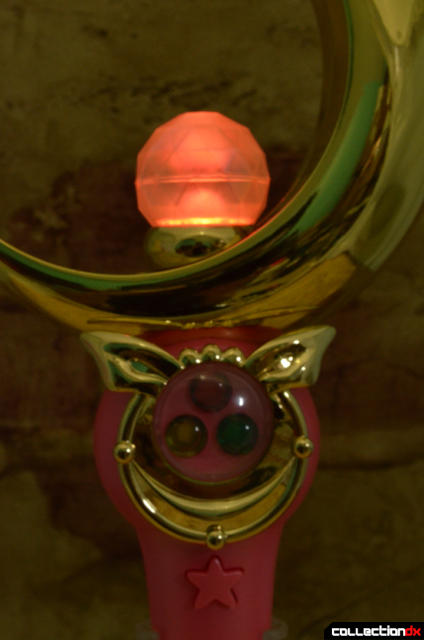 The Moon Stick features 8 different sounds, which are produced by using different combinations of the “moon” and “star” settings on the wand, pressing or holding the star button and using the wand with or without the Silver Crystal. Check out my video review to listen in on the sounds of the Moon Stick and also check out the LED lights!

The Moon Stick also comes with a stand so that you can proudly display your Proplica for the world to see. 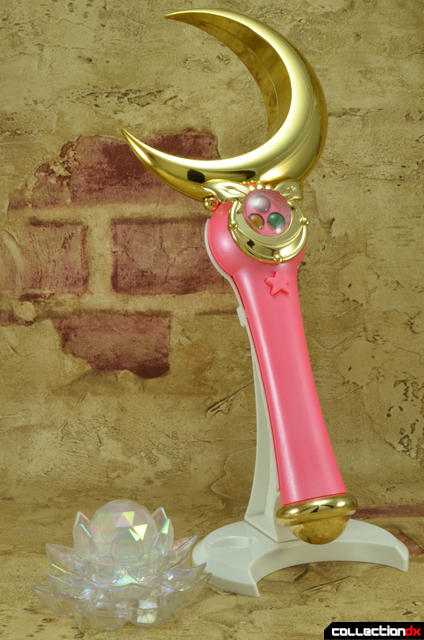 The base of the stand has an indentation in it. You can place either the chrome cover for the crescent or the Silver Crystal on this part of the base. 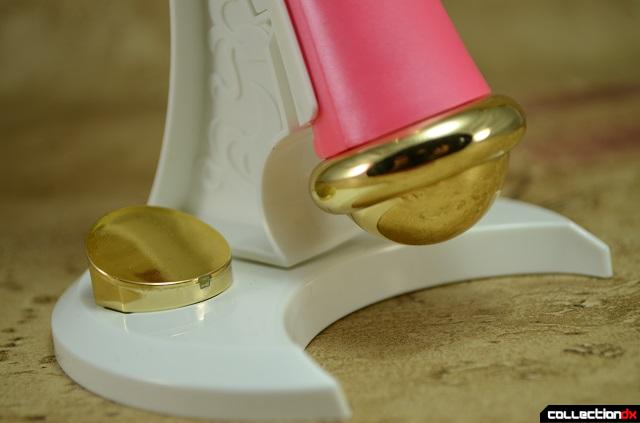 The stand's design takes into consideration that sounds for the Moon Stick come out of the rear of the toy. There is a circular cutout at the back of the stand, so that you can still listen to the sounds effects of the Moon Stick while it rests in the stand. 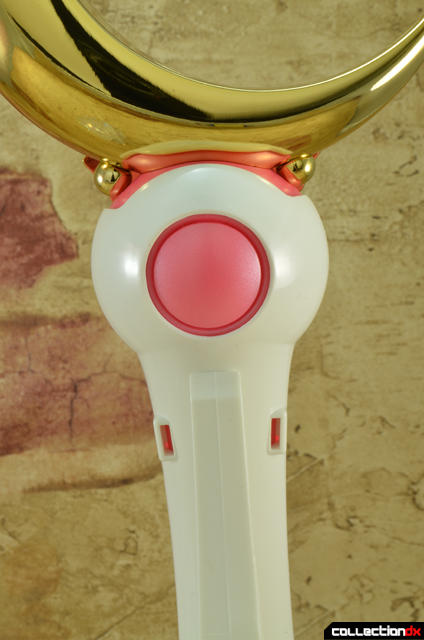 Also included is a pretty sweet flower-themed display piece to insert the Silver Crystal into. 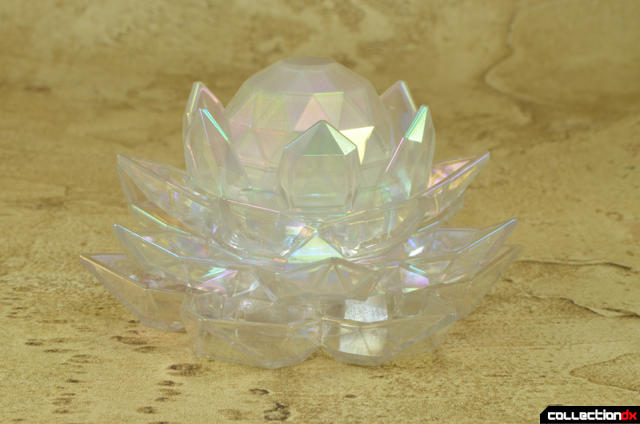 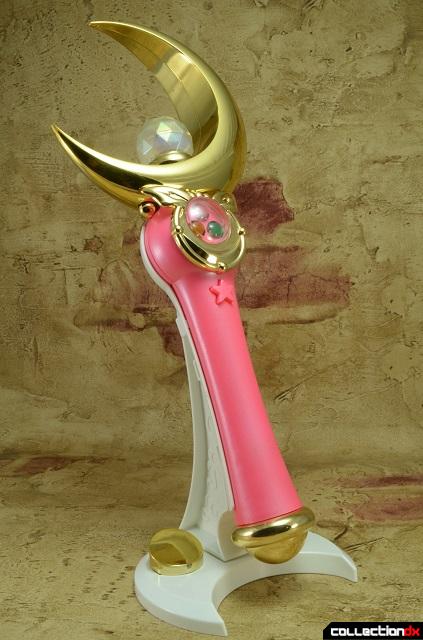 The Moon Stick is a very smartly designed prop replica, which gives us a very faithful rendition of Sailor Moon’s iconic weapon. This version of the Moon stick will no doubt satisfy even the most discerning Moonie looking for a great display piece or for a prop to go with their Sailor Moon cosplay.

Review sample provided by Bluefin Distribution. Get yours at BigBadToyStore!

8 comments posted
Did not figure you for a

Did not figure you for a Sailor Moon fan. *high-fives* Do you collect the Figuarts? I picked up Venus recently, her being my favorite Inner, and they are pretty nice. Just a bit on the small side. Oh, and a minor nitpick with your review: Her name is spelled "Beryl", the name for the family of gemstones that the emerald belongs to.

Do you plan on getting the Cutie Moon Rod? We've seen preview shots, Japanese preorders start on July 1st.

Sailor Moon was one of those anime series that I was pretty big into when I was in 6th grade. Man does that sentence make me feel old. Thanks for pointing out the spelling of the name. I had actually caught that before I published the review and I could have sworn I fixed it.

As for the S.H. Figuarts, I only own Moon and Mars. They are small, but they certainly feel in scale with the other S.H. Figuarts. I would like to get all of the Sailor Senshi, but I just don't have the kind of cash to collect the Sailor Moon Figuarts along with everything else I am currently buying. The same goes for the Cutie Moon Rod. Although that looks pretty good from the preview shots.

Originally I only planned to get the four Outer Senshi and either Super or Eternal Moon....I may end up with quite a few more. Especially if they release Neo Queen Serenity and King Endymion.

That's the thing about S.H. Figuarts. You buy one and then you're hooked!
If they don't release Endymion, I hope they at least give us a Tuxedo Mask. That way we get at least one version of the character.

I don't see how they can *not* release Tuxedo Mask. It would infuriate too many fans, and Bandai is not gonna risk the wrath of the Moonies. NGS and the King should be released, if only as an exclusive. People would lose their s**t trying to get their hands on them.

I agree. It seems odd to me that they have not released or even announced Tuxedo Mask already. I would have pegged him as one of the first six releases along with the five main Sailor Senshi.

Maybe I'm a bit too nitpicky but those seam lines on it really bothers me.Especially on the crescent.

The seams didn't really bother me, but I can see where you are coming from. I notice them more now that you mentioned how they bother you.