Mobile Suit Gundam: Your Desk Becomes the One Year War?!

Everyone has toys that they think of as grails. Toys that they have lusted over for years, and would go to any length to obtain. Things that, when acquired, could never be sold (or so one tells themselves).
The opposite of the grail might then be the 'impulse buy'; something acquired on the spur of the moment after a brief initial meeting. Each provides a sense of fulfillment for the buyer, though on different levels.

The only reason I'm opening with this weird bit of toy ontology is because of a recent experience where I realized the existence of a type of toy that fits somewhere between grail and impulse. A toy that you have no prior knowledge of, but upon observation triggers a deep emotional response within you on the same level as a grail. You never thought of this toy before, but you know instantly that you need it, recognizing it as no ordinary impulse.

The toy that I connected with so strongly comes eight to a bag, and can be purchased for about six dollars.

The full name of this product is something along the lines of "Line Up BEST SHOW Mobile Suit Gundam: The Top of the Desk Becomes the One Year War?!", but let's not mince words here: These are Gundam army men. 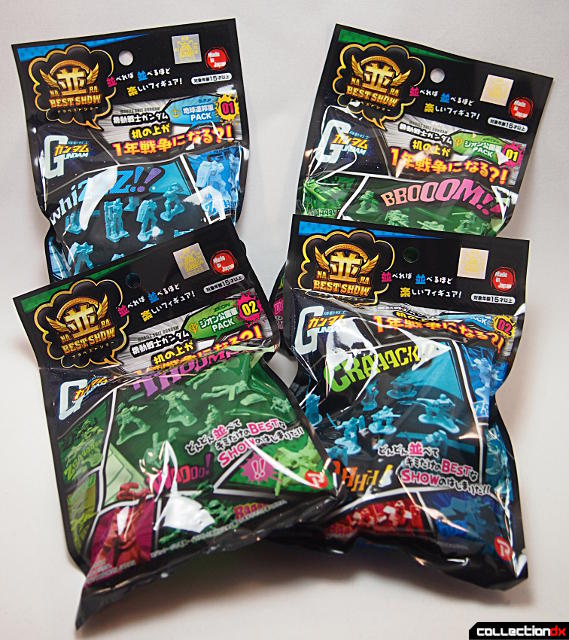 The current line up consists of two Federation varieties and two Zeon varieties. Each bag contains eight figures in two poses, as well as an extra piece. 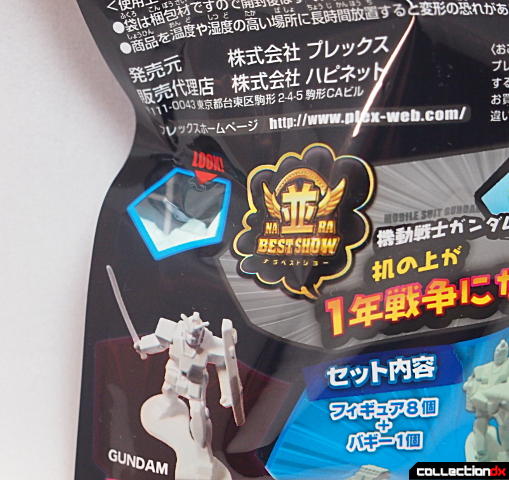 The chase figures in this line are the Gundam and Char's custom Zaku. I assume the odds of getting one of the rare figures is 1 in 6, since that's how many come shipped in a retail display box. There's a small window on the back of each package allowing you to try and see if you found one, but the bags are packed pretty tightly, so you can't really move the contents around. 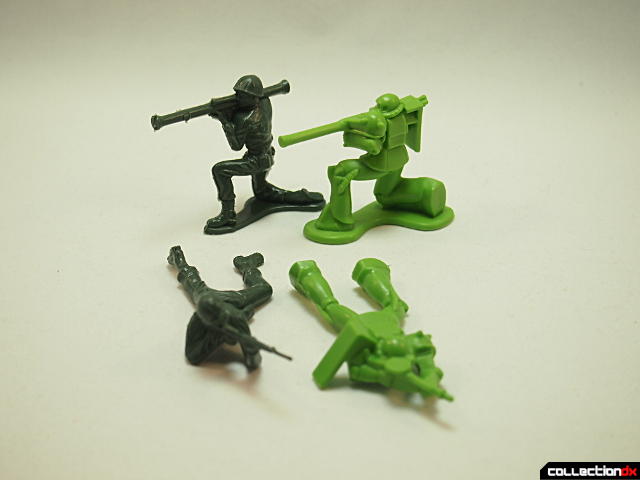 The figure height varies depending on pose, but the standing figures are about 2 inches tall. They're army men size. The Zeons come in green because of course they do, while the Federation units are more of a light minty color. 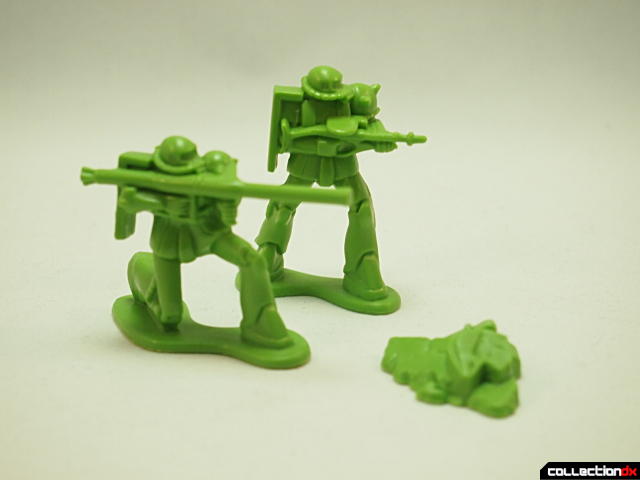 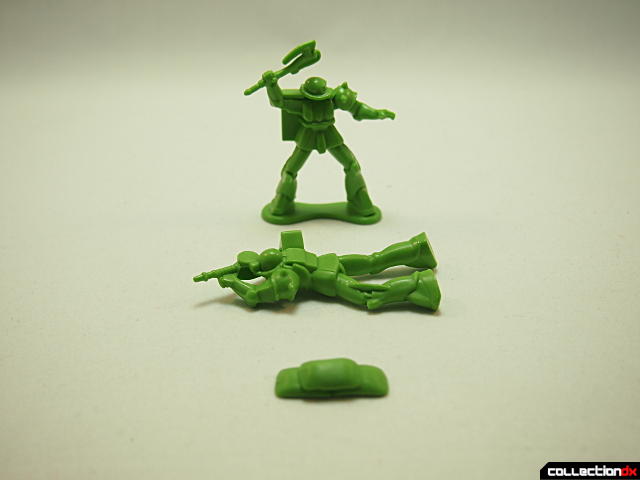 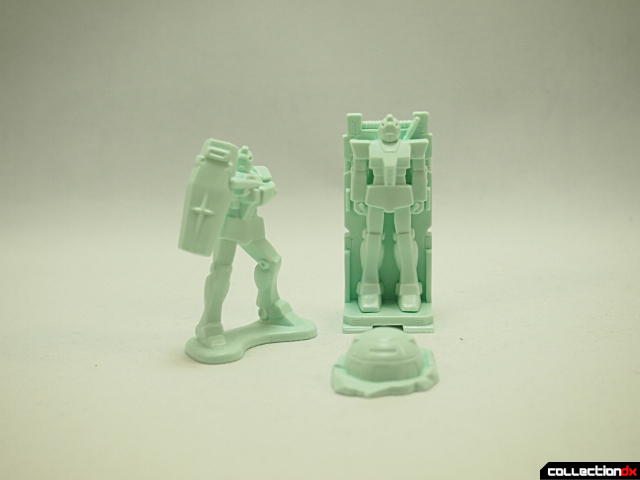 Federation Pack 01 is made up of 4 beam spray gun GMs, 4 docked GMs and a tochka pillbox. The docked GMs are probably the weakest of any of the figures. They're hefty, but unless you're doing some sort of base diorama there's not a whole lot you can do with them. 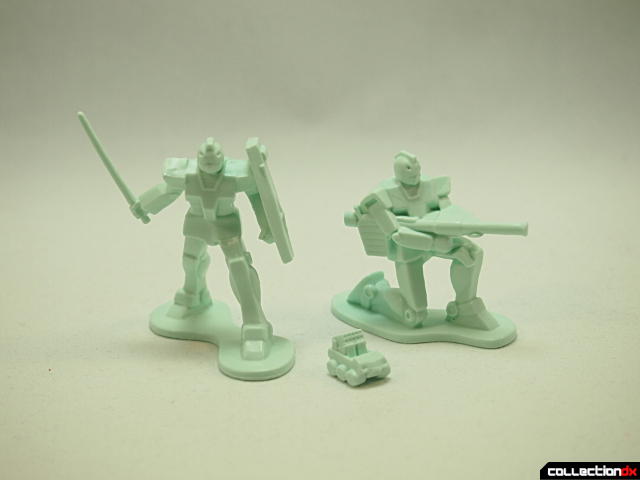 The plastic in these is tough and solid. Compared to the other army men that I was surprised to find I still had, these figures have a lot less flex. Furthermore, the sculpting and manufacture is excellent, with no flash and nearly invisible seam lines.

The only real negative is the price. Although the pricing is as expected for trading figures and the quality is really good, the most impressive thing about the army men format is usually the quantity they come in. If I just wanted army men, I could get a couple hundred off of Amazon for just a few dollars more than the price of one of these bags.
If you want to build a mobile suit army, it'll be a little more expensive. The product name suggests that instead of large scale warfare these figures are best used to fight small skirmishes in your workplace, but the lack of overwhelming force seems almost counter to the army men spirit. After all, these toys were never about subtlety.

Finally, let's look at my luck with the rare figures. I bought 3 bags of each variety and I got.... 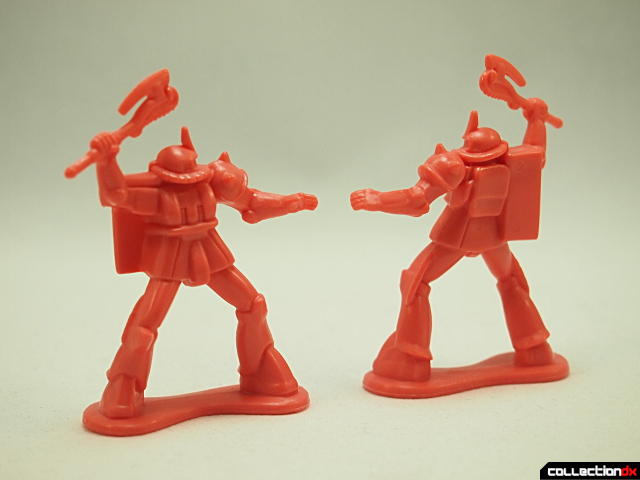 Well, you win some, you lose some.

I really hope there are future packs to come out in this line. It's a wonderful take on an iconic toy. 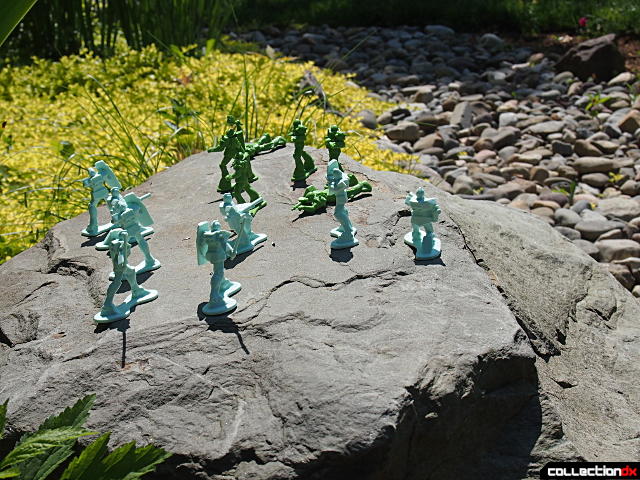 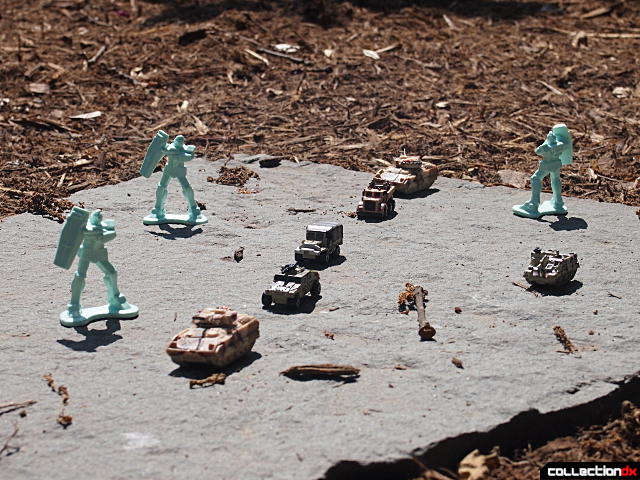 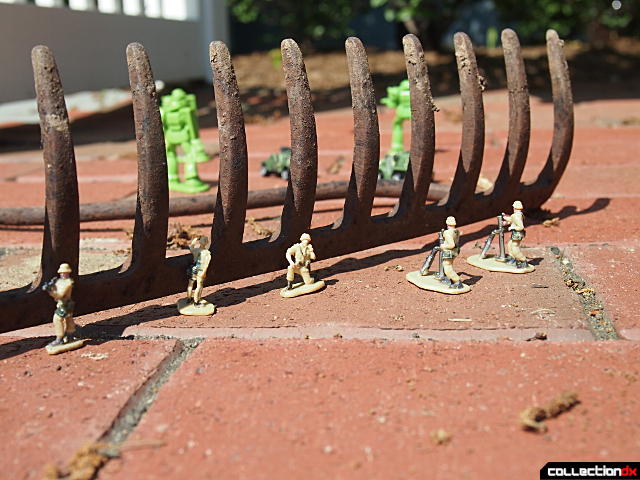 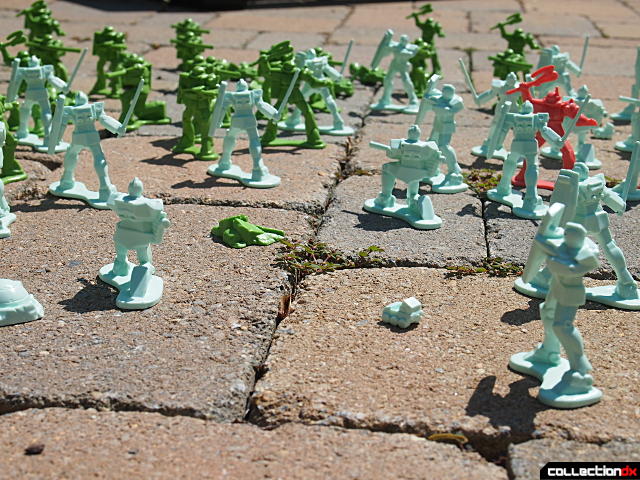 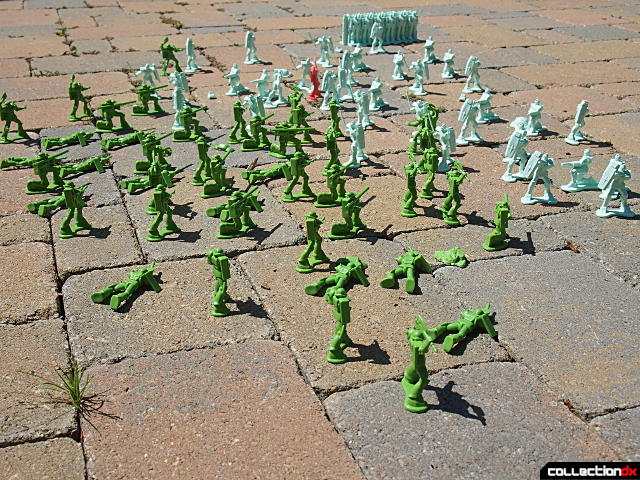 Despite the name of the toy, I did not take any pictures on my desk, which is so covered in garbage that I'm not entirely sure where it is.

Those look like so much fun! I love your outdoor battles. I love how you used perspective to make the army men hiding behind the rake... fortification... look in scale.

The idea of a Zaku-sized sandbag just boggles the mind. Putting the GMs next to proper 1/144 scale military vehicles (what series are those?) exposes the ludicrous scale of the Gundam universe... because the GMs look natural, but really, they'd have to be HG/RG to "match" those vehicles. And that would look silly. At least to my eyes.

This review was a lot of fun to do. I had forgotten that I still had a bunch of army men and micro machines from childhood in storage. I hope that they do more support vehicles if they continue this line, they could probably do a Magella Attack tank and get pretty close on the scale.

Where'd you get these?! I must have them!

I pre-ordered these from AmiAmi when I saw them go up a few months ago. Right now they seem to be sold out all over, except for Amazon's Japanese site. It could just be a stock issue, and I'd recommend keeping an eye on this page and the other packs that are linked from it. Part of the problem seems to be that this line doesn't really have an English name, so if you can find them on English speaking retailers they're probably coming up with an in house translation. The name of the line in Japanese is "並ベストショー 機動戦士ガンダム 机の上が1年戦争になる?!", if that helps with searching. These just came out at the end of last month, and the manufacturer still has them in stock, so hopefully it's just a matter of taking time to restock at web retailers.

Finally, I can reenact the moments before the battle of A Baoa Qu! Give me a big Magnifying Lens! SOLAR RAY CANNON!

Ha! The docked GM is the equivalent of the ubiquitous green army man with the walkie talkie!

Oh these are so cool!!

These are actually in stock at amiami currently. I think you need to search Regular Best Show.

Rakuten also seems to have some in stock as well:

This strikes me as absolutely genius and makes me wonder why they didn't do this kinda thing earlier.

...but if you're in Tokyo, there seems to be plenty of bags of these going round at toy shops and hobby retailers such as Kiddyland and LAOX. Thats as of a week ago.