Aside from general points about setting, this review will be spoiler-free.

Long ago, mankind was faced with the sudden appearance of a new adversary. Nearly unstoppable giants, who were only driven by a compulsion to feed on humans. Humanity was nearly pushed to the point of extinction. Unable to turn back their enemy, the remaining population took shelter within massive concentric walls. A century of peace with passed, and mankind began to rebuild. Until one day, when the outer wall was breached, and the titans reappeared.

Shingeki no Kyojin- Attack on Titan was one of the biggest anime breakouts of 2013. It is unrelenting in its brutality and despair, but its engrossing tale of survival and loss has found widespread popularity both in and outside of Japan. I was there in the summer of 2012, and even then Shingeki no Kyojin was everywhere, due to the manga's popularity. When the anime started, there was only one piece of merchandise that I wanted, and thankfully I didn't have to wait too long for Max Factory's announcement. Today I'll be looking at figma release 203, Mikasa Ackerman.

Max Factory changed the packaging for the figma line starting with release 200. It's been a little while since I last bought a figma, so this was my first time seeing the new layout in person. Your mileage may vary, but I like it. The thick black wraparound bar and single color background give it quite a classy look. 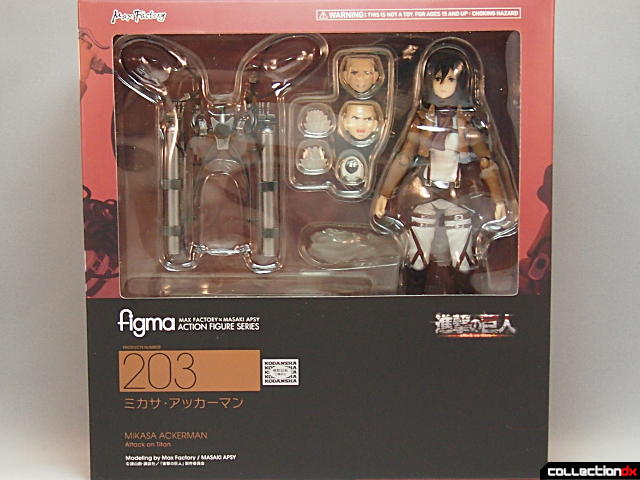 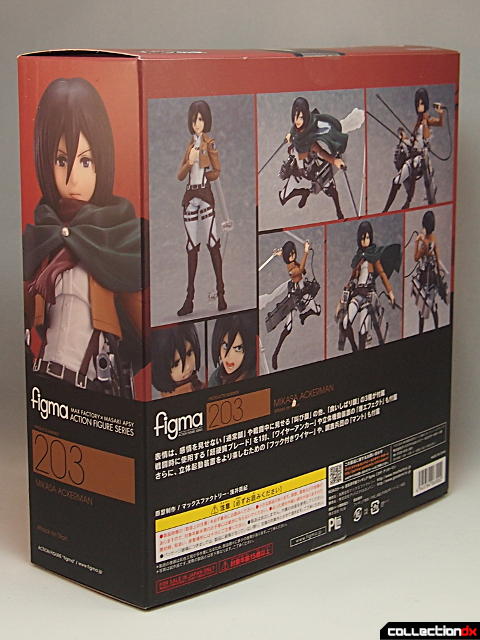 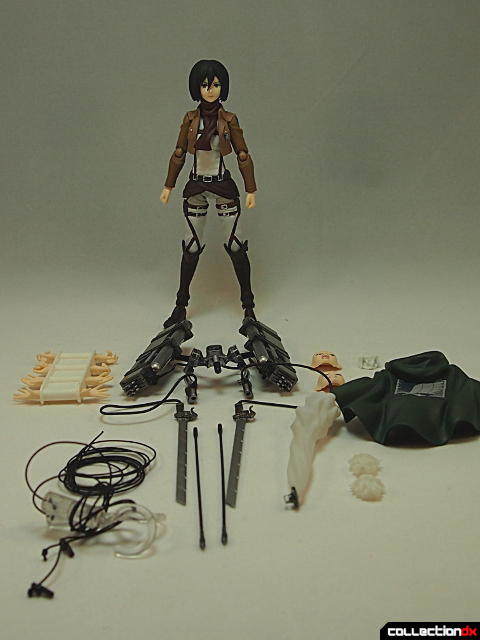 There is a lot going on with this release, so let's start with Mikasa herself. 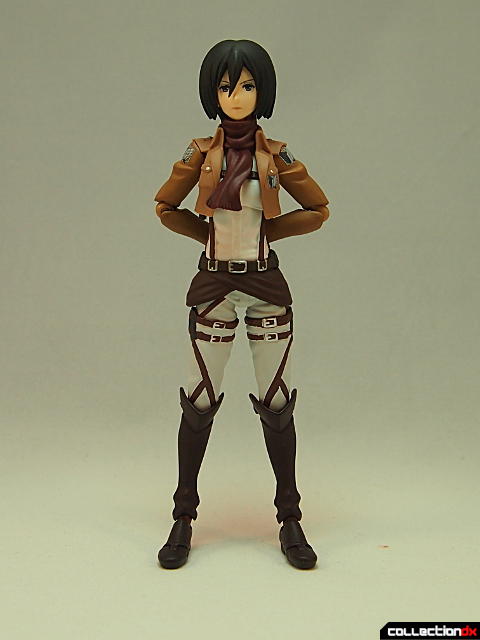 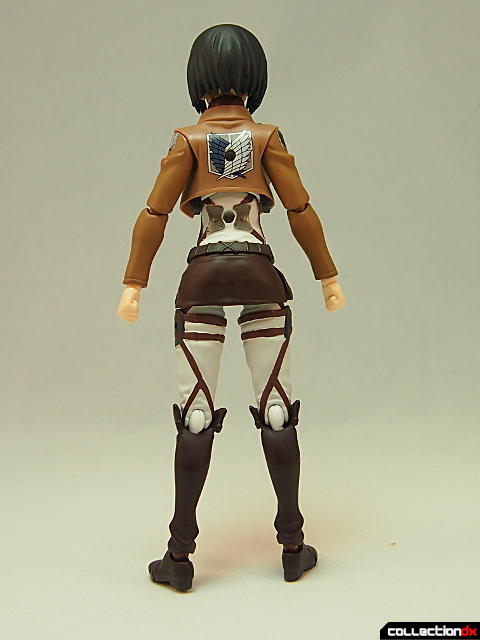 The base figure looks fantastic. The sculpt is dead on (as figmas tend to be), and the figure uses a mix of plastic and flexible rubber to allow the clothing to move a little more naturally (as figmas tend to do). The jacket (sans sleeves), that unisex skirt thing, and the scarf she received from her dopey brother are all made of rubber. The insignia of the Survey Corps, the so called "wings of freedom" is sharply tampo printed on her jacket four times: over the left breast pocket, on both shoulders, and across the back. Detailing is mostly top notch, although unfortunately it's not perfect. On close inspection the paint on the harnesses is uneven in a lot of spots, often looking like it was applied too thinly. This was literally the only imperfection I could find, but the harnesses are such a big part of the design that it becomes somewhat of an issue, although it's not as noticeable from a distance.

Articulation should be familiar to anyone that's owned a figma. It's not extreme, but does pretty much what you'd need it to. I...went down a weird path where I thought about just labeling the joints instead of describing them. I immediately realized right away that MS Paint was not the greatest venue for my idea but by then I was committed. 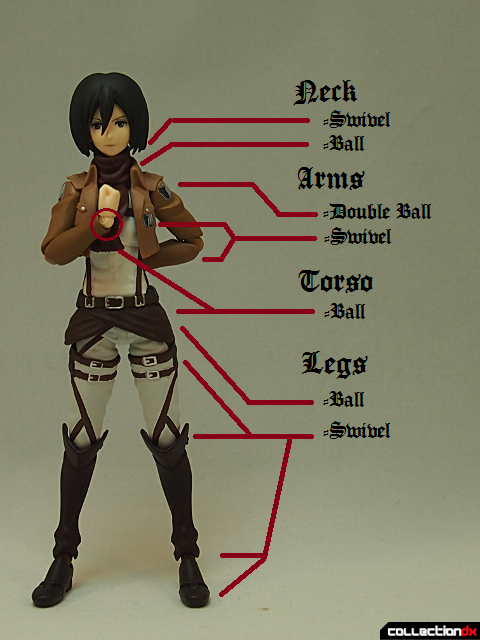 Oh God I've made some sort of public transit map.

A couple extra tricks separate Mikasa from the majority of her figma brethren. A new design for the wrists was introduced with the 200th figma, which replaces the old method of having each hand permanently attached to an articulated straight peg to using tiny separate wrist joints, which the hands now plug in to. 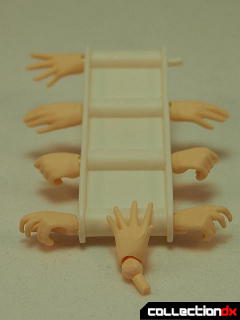 Looking at the figmas already announced, along with 201 and 202 which still use the old style hands, it looks like Max Factory is far from committed to implementing this new joint for the entire line, with only 3 out of 12 of the unreleased figmas on the official homepage using the new design (Among those three, two of them are from this show). I still don't know if I'm completely sold on it, and getting a hand to line up just right is more finicky than it was with the old wrists, but it does improve the poseability. Hands can now move side to side in a way that wasn't possible before (the internet tells me that this is called ulnar and radial deviation). An extra wrist joint is also included, just in case. There's a swivel in the thighs, and a toe joint on the feet. The thigh swivel is pretty uncommon for this line, but the figma toe joint is so underused that it comes close to being imaginary.

Mikasa comes with two extra faceplates showing varying degrees of emotion, as well as a collar that can be swapped for her scarf. 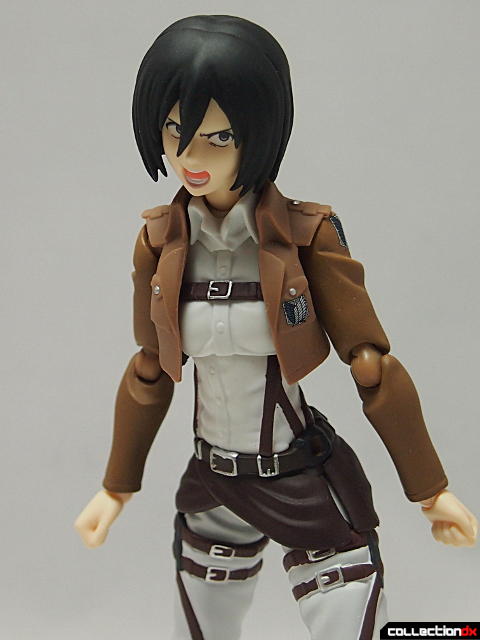 She really likes that scarf though, so let's give it back to her. I do wish that they had included a version of the scarf that could be pulled up over her face, similar to the Nendoroid version. 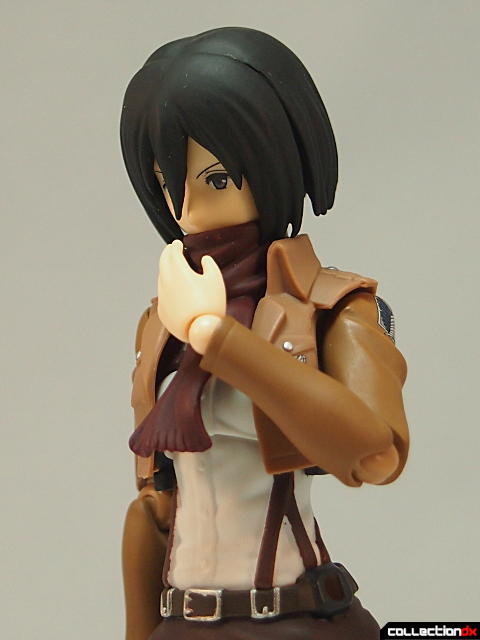 The scarf has enough give that you can get it over her mouth, but getting it to lie flat and/or stay in place is...touchy.

Also included is a Survey Corps cloak. This is made out of thick rubber and secured into the back of the jacket with a plastic peg. 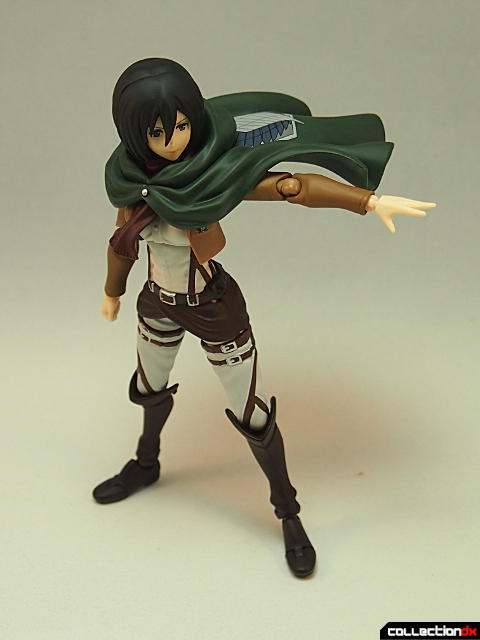 Of course, what really makes this release stand out is the inclusion of the Three-Dimensional Maneuver Gear, the equipment that gives mankind the mobility to fight back against the titans.

Getting Mikasa into her equipment is a little involved. The fan unit notches into her back, and the left and right wire armatures peg into her waist. 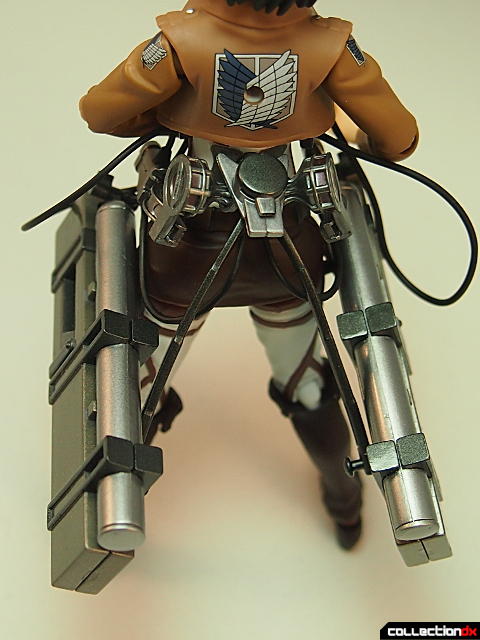 The gas tank assemblies have another peg that fit into her thighs. 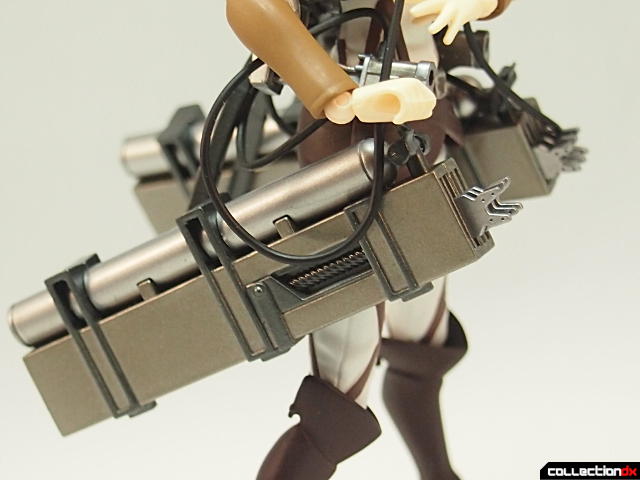 The manual cautions against using force on the wire drums (the two cylinders on the back that kind of look like carburetors), so there's not a lot to hold onto when getting the gear on and off.

The hoses and straps are rubber, which look pretty good and for the most part hang naturally, but I can't help but get nervous around these really thin rubber pieces.

The lines on top of the wire arms can attach to mounting points underneath Mikasa's jacket to mimic the look of having the control units holstered. 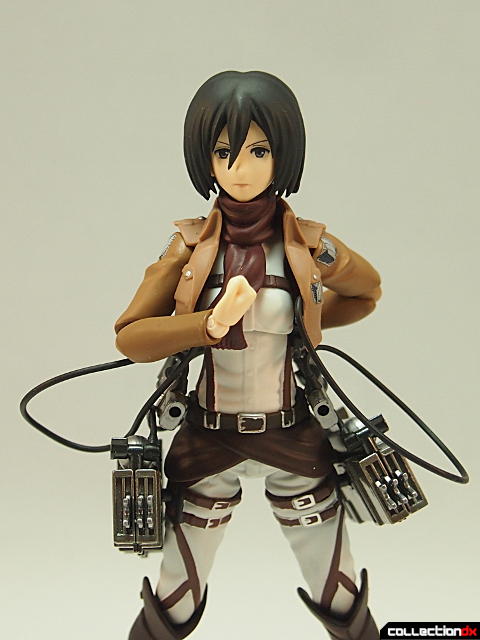 Once it's time to fly those lines can connect to the control units properly. Just like in the source material, the blades of super hardened steel can be removed. The blades are fairly flexible, but very thin, so it's another area to exercise caution with. 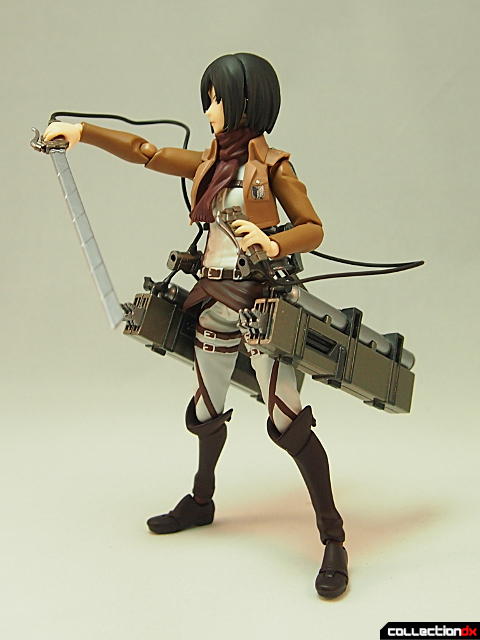 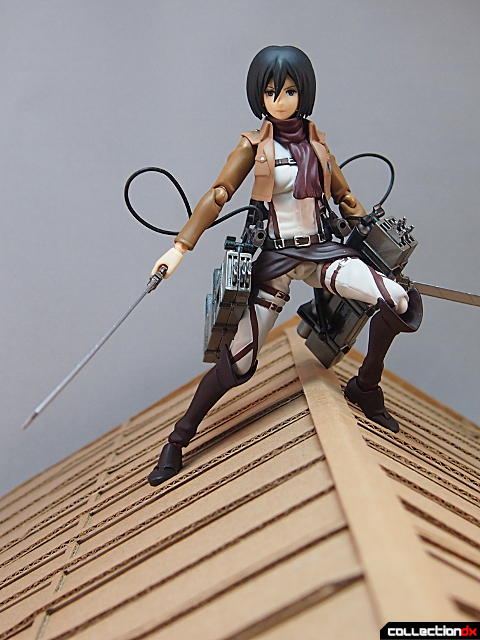 Also, I definitely allowed myself to get my hopes up after seeing the 12" Real Action Heroes version of Mikasa, but it should be pointed out that the 3D Maneuver gear isn't able to do much besides look cool. The blades in the sheath cannot be removed or holstered, nor are the gas tanks removable. You do however, get plenty of effect parts to go along with it.

Two wire lines in mid-launch are included, and two bursts of "gas" slide over the wire launchers to complete the look. A longer exhaust trail attaches to the back of the unit, which has a mounting hole in the back for attaching to the included figma stand or any other stands with a 3 millimeter post you have lying around. 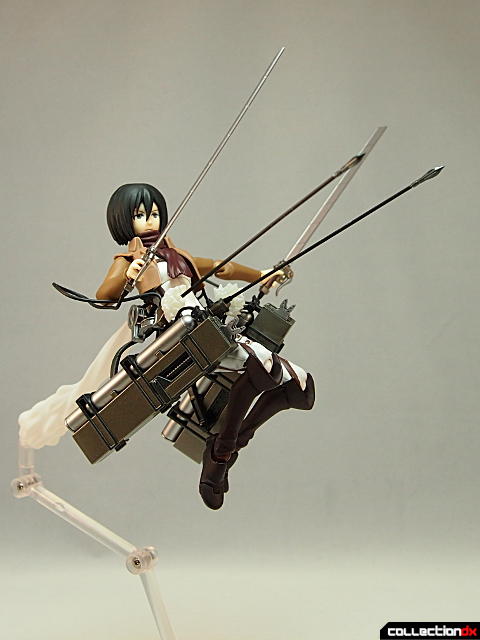 If you want to get a little more creative with the maneuver gear two lines made out of string are included for zipping around cities or forests. These are tied to a peg which attaches the same way the plastic wires do. The gas effects also serve the extra functions of both hiding the pegs and locking them in place. 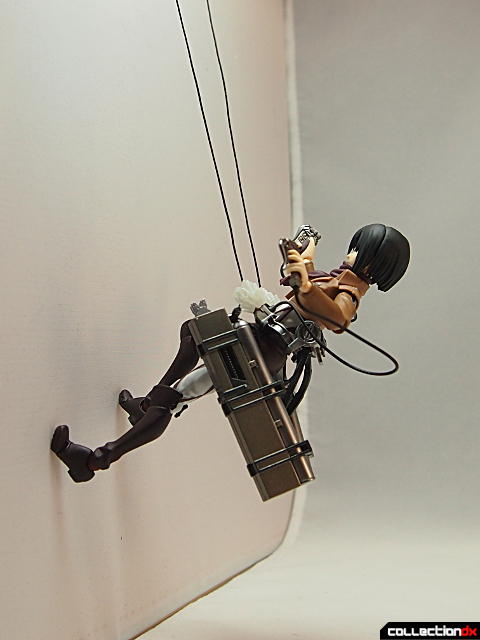 At the other end of the lines are plastic hooks, which can also come off to reveal another set of 3 millimeter posts for use with Max Factory's di:stages, or again, whatever you might have as a substitute. Two extra lengths of string are included. Again, just in case.

As a 50 dollar figure plus the change needed for importing it, it's really up to the individual consumer to decide whether or not this is worth it to you. This is surprisingly ambitious for a figma, and while it isn't perfect, it was still the figure I was hoping for. 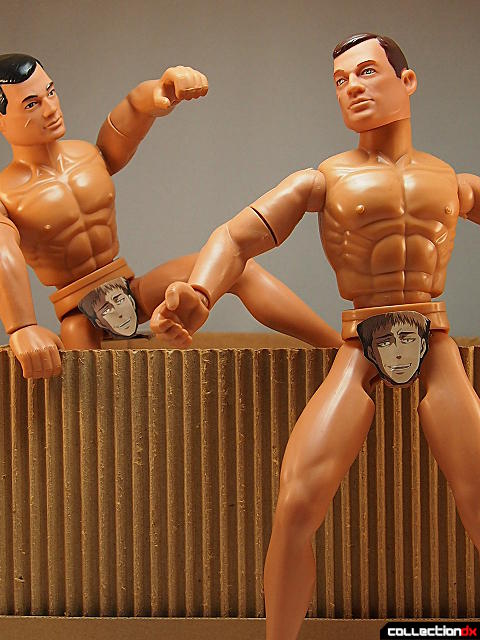 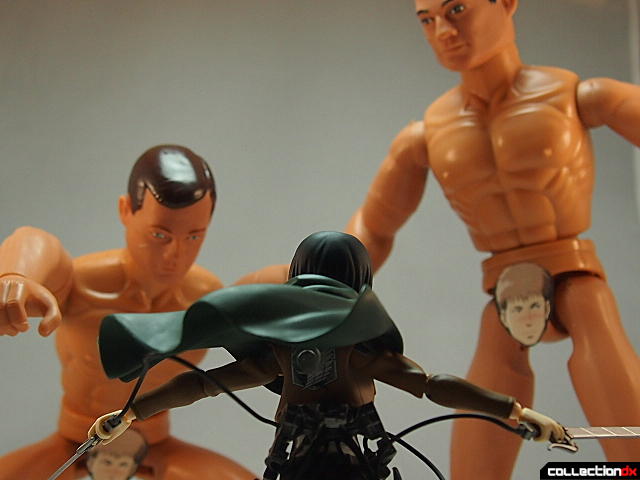 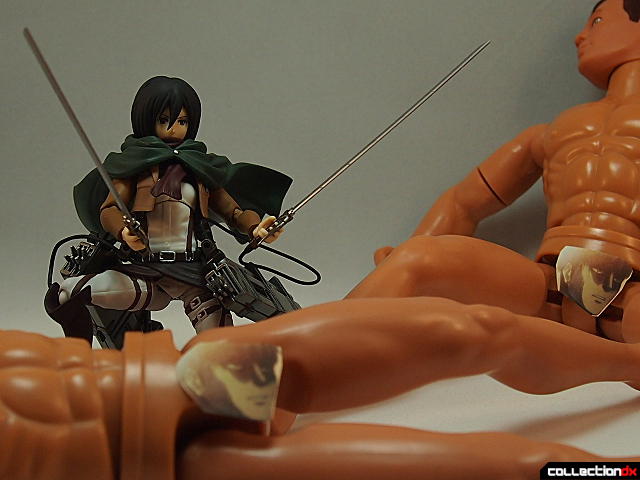 It can't be helped, can it? Because...this world is cruel. 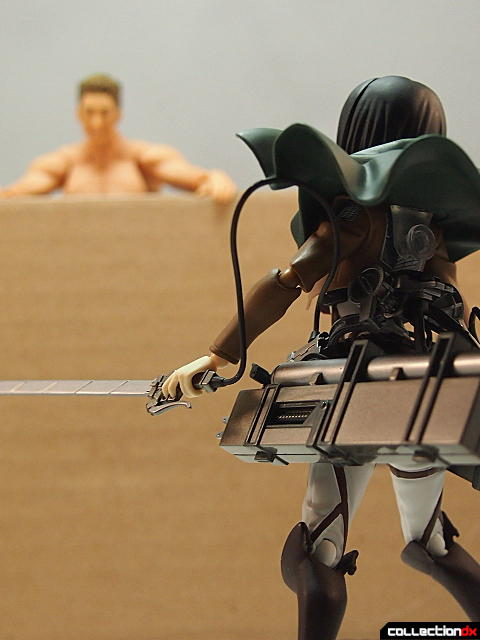 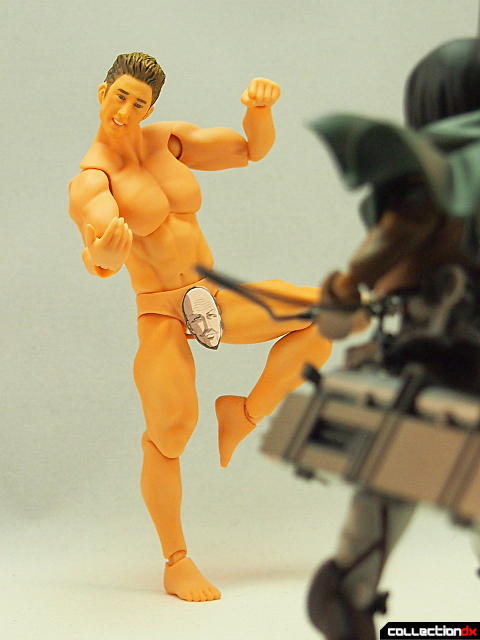 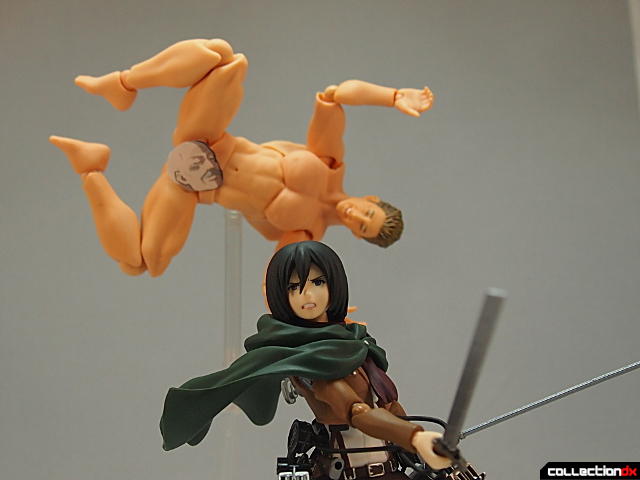 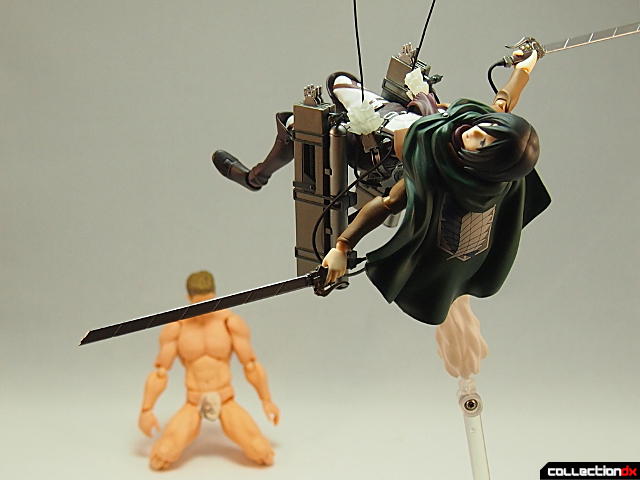 If you don't fight, you can't win 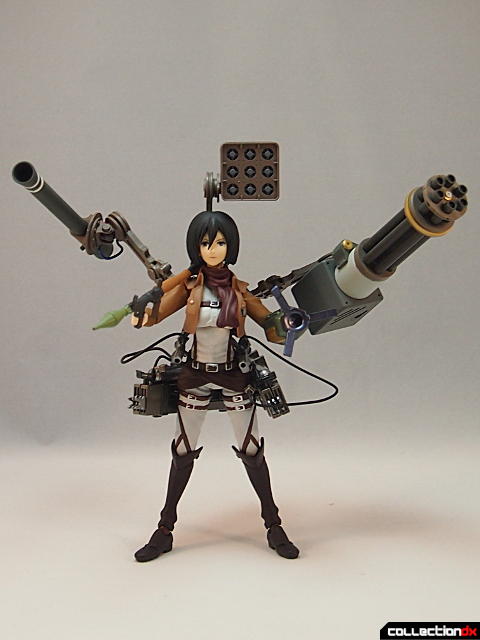 My specialty...is severing flesh. If necessary, I'm ready to demonstrate it at any time. If there is anyone who wishes to experience my ability, by all means, step forward. 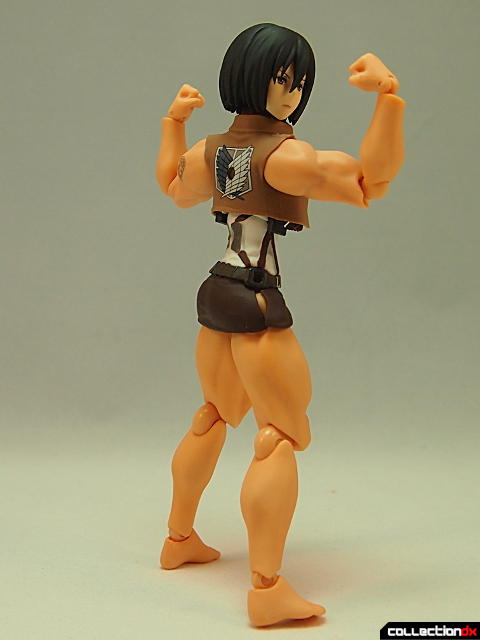 5 comments posted
AWESOME review! I was

AWESOME review! I was impressed with the cardboard rooftop, did you make that just for this review? I also like the pose you did of her hanging on the side of the light tent with the maneuver gear. Asif it couldnt get cooler, you added titans! hahaha, you nailed all their quirky movements. Great job in posing Mikasa, very dynamic.. I have all but Artlert on order which is strange because I'm not keen on spending more than $20 on an action figure, but I love the characters.

I believe this is the first non-mecha anime I've watched...and prob first anime Ive watched in its entirety really. Great show and great review to go with it. Good job

Haha, thanks. The roof was actually part of one of my brother's old art projects, and it was just lying around. It didn't click with me to use it until I was in the process of taking pictures. I'm still trying to get my lighting game consistent, but the rooftop one is my favorite out of the shots I took.

I guess if I can manage to do something in a review that weirds you out, I must be doing something right ^^

great review nice action pics, my wife will probably get these, I am going to encourage her to build a cardboard roof!