Iron Man 3 brought many things to the Marvel Cinematic universe. Our smarmy billionaire playboy philanthropist fought against the nefarious (and hunky) Aldrich Killian with the help of his beleaguered brother in arms, Colonel James Rhodes. In the film, Rhodes is the pilot of an upgraded War Machine which has been renamed "Iron Patriot" as a way of putting a nicer face on a one man battle tank. There have been several toys of this armored hero (and more on the way), Good Smile has thrown their hat into the ring with a cute Super Deformed version of the red, white, and blue Avenger. 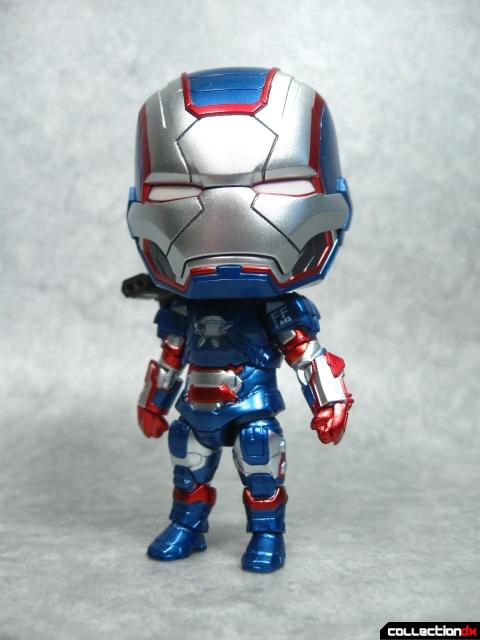 The Nendoroid Iron Patriot stands a little under four inches tall with most of that being his huge, highly detailed head. Rhodey cuts a mean figure even in this cute incarnation and the excellent detail all around brings a lot of legitimacy to the toy. 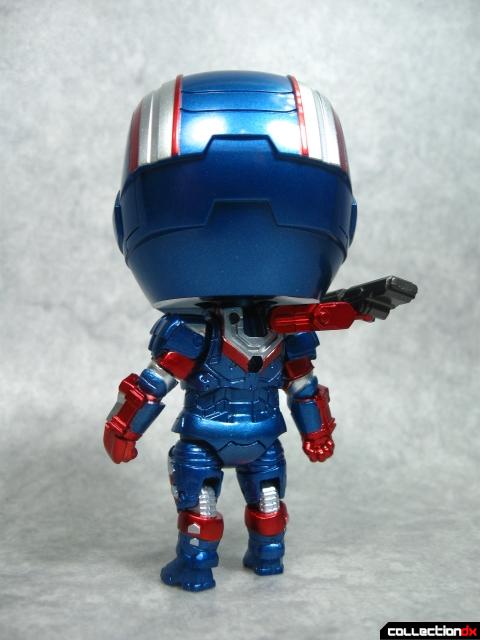 Unlike most Nendoroids, Iron Patriot can stand quite well unaided thanks to a fairly light head and a solid stance afforded by his boots. His helmet is made of light ABS plastic so the figure is less top heavy than it appears. He can stand even with a face inside the helmet. Note that the back has two places for attaching the shoulder cannon which replicates the gun's ability to swing over either shoulder. The big hole in the middle is for attaching the armature from one of the display stands. You will probably want to leave Iron Patriot hooked up to one of the bases for long term display but he will continue to stand by himself so long as you don't bump the table. 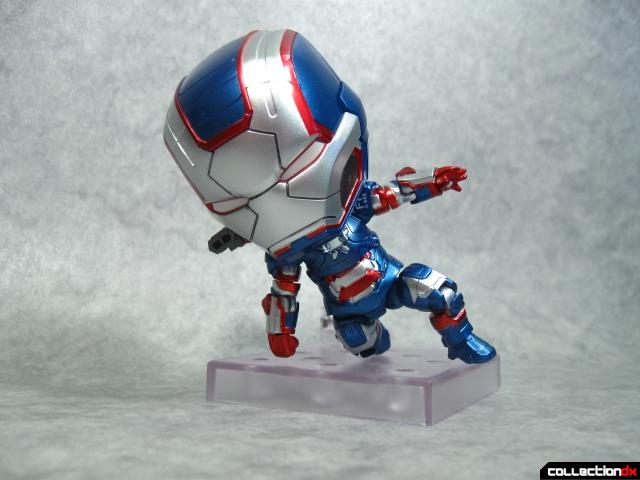 Iron Patriot follows on the from Nendoroid Iron Man Mark XLII by having a full set of joints built into his limbs which allows for free posing without any parts swapping. He's got everything a full sized action figure has and can even do a cutesy version of The Iron Man Pose™. 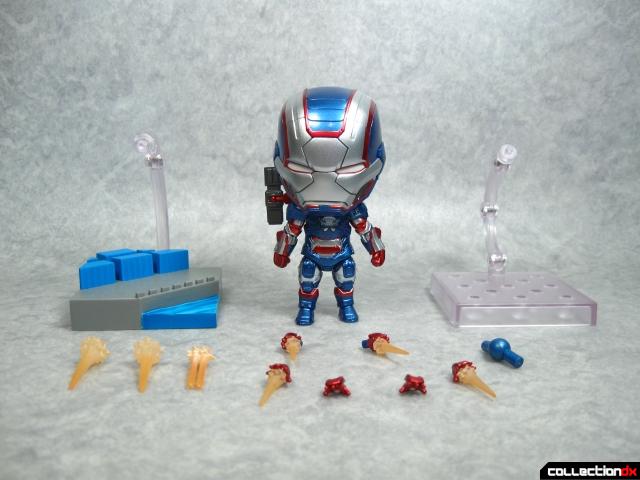 Lacking the need for extra arms or legs, Iron Patriot's accessories are focused on replicating his high-tech weaponry in an adorable arsenal. Included are two pairs of repulsor blasting hands, two open palm hands, a pair of boot jets, and a double blast for the shoulder cannon. You get two display stands with interchangeable armatures and an extra blue Nendoroid type joint in case you need on. Also included is a face for inside the helmet, but we will get to that in a bit. 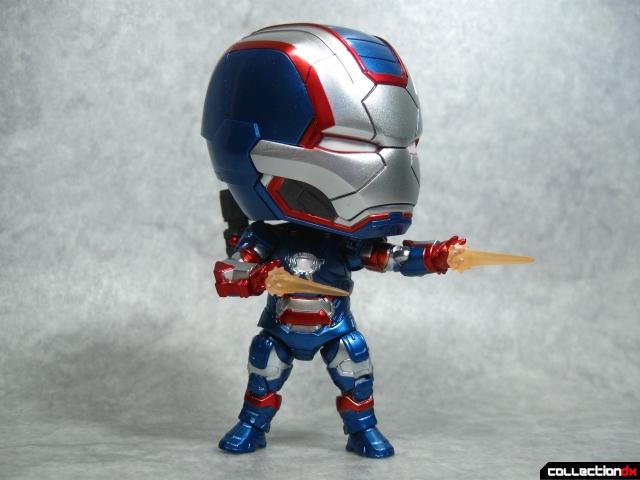 Swapping the tiny hands is quite easy and gives Colonel Rhodes a few ways of firing his repulsors. You get a pair for straight arm blasts that work well with his movable arms. Iron Patriot posses free moving bicep swivels, elbows, rotating wrists, and a small ball-joint and hinge combo in each shoulder. His chest can also move a little to the left or right. Like most other Nendoroids, Iron Patriots legs are attached to his body with the usual Nendoroid universal joint that give his hips a fair degree of movement. As you saw before, his has working knees that bend about ninety degrees. Also the ankles feature a small bit of motion that help keep the feet firmly planted on the ground. 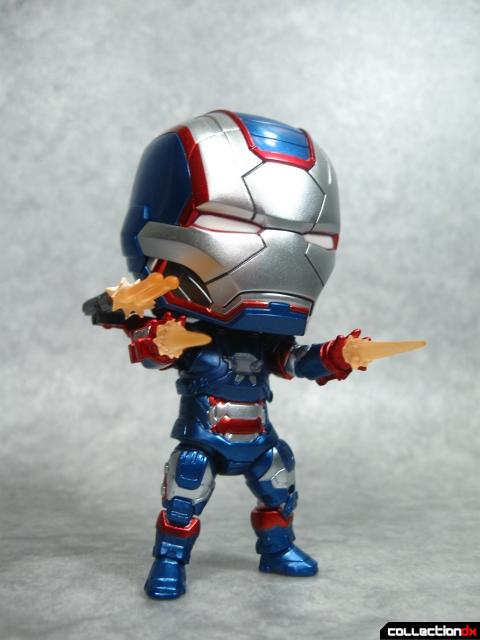 The shoulder cannon can mounted on a ball-joint which lets it maneuver into place. I find adding the double blast effect to the cannon helps it stand out against the big helmet when it normally gets obscured by the iron noggin. All these cool accessories lets this Nendoroid cut quite an imposing presence for a cutesy action figure. 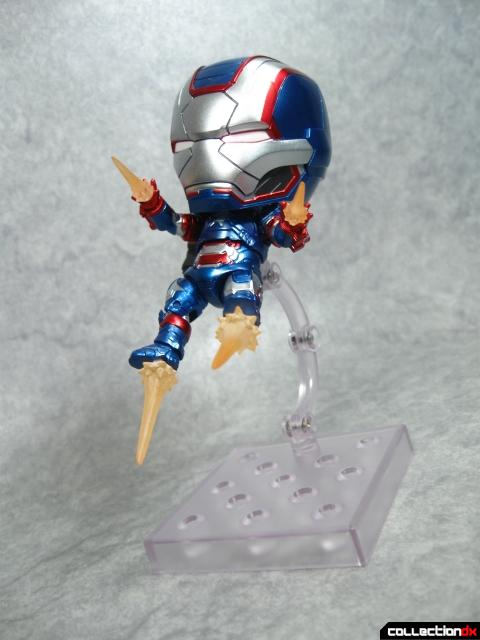 A pair of boot jet effect parts work in conjunction with either of the two display bases to let Iron Patriot take to the skies. Each part is keyed to a specific sole for ease of use and stay attached quite well. With his palms facing forward, Rhodey pulls off a braking maneuver. 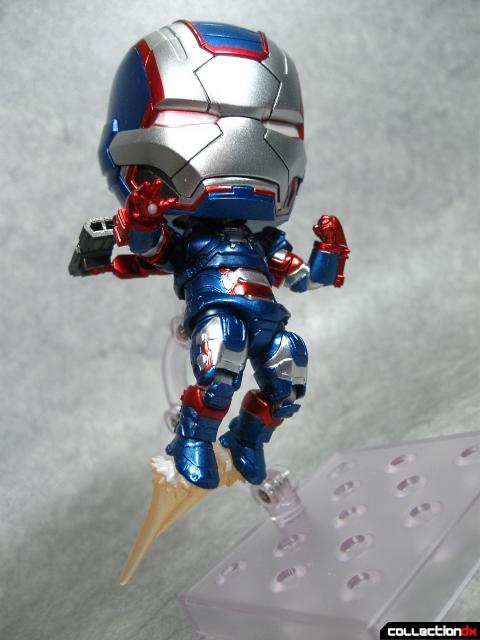 He's quite heroic even in this compact form. 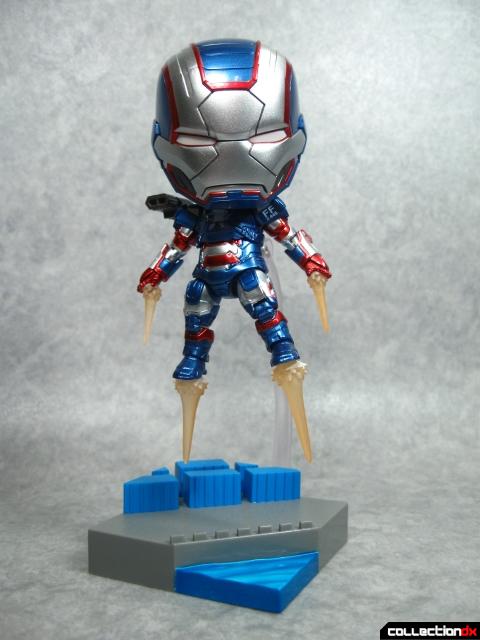 The other base resembles the loading dock where the film's climatic fight against the Extremis soldiers took place. With this display you will probably want to use the longer armature so that Iron Patriot's boot jets don't touch the tiny blue containers. I like how the use of forced perspective to make it look like Rhodey is flying high above the scene. Also here I am using the hands that have their repulsor blasts pointing down for the usual hovering pose. 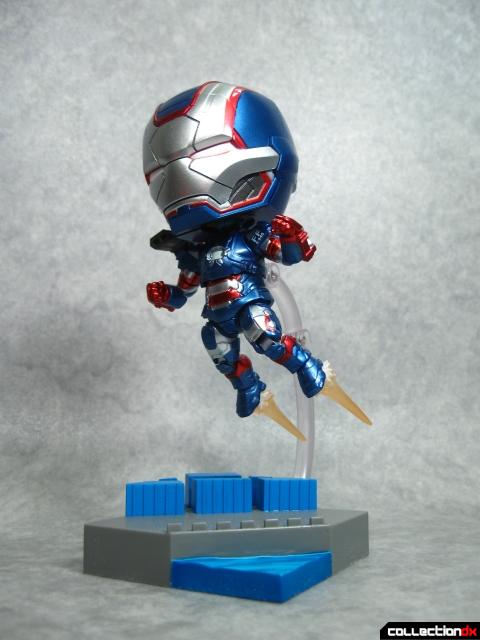 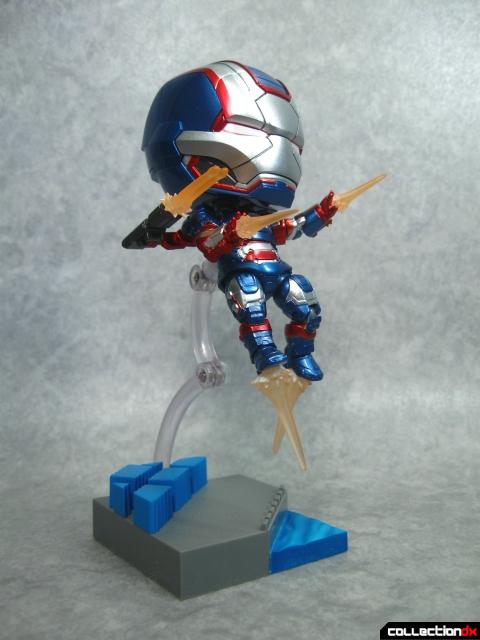 "Those damn human torches are gonna have to get through me!" 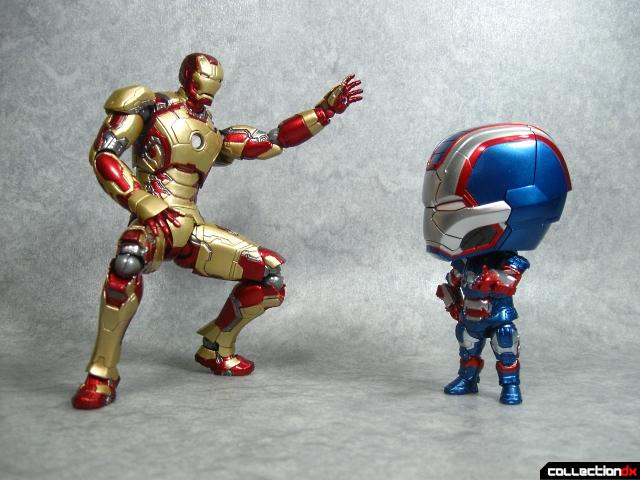 "I told you, Tony! You don't have to do this whole 'lone gunman' thing!"

"Uh listen squirt, I only get help from people tall enough to ride on a roller coaster." 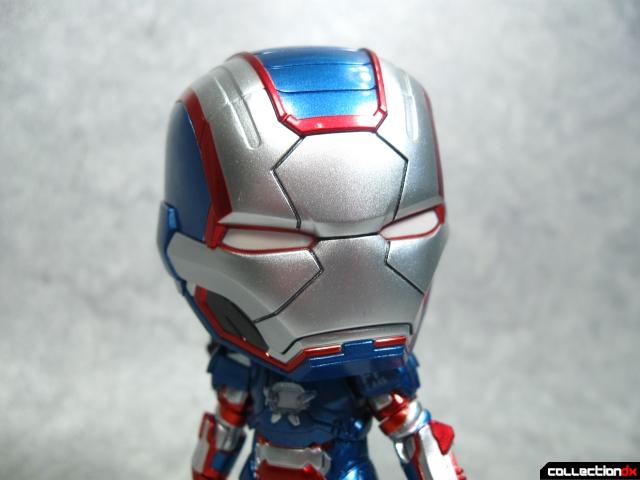 Let's focus on the armored cranium for a bit. The helmet is exquisitely detailed all over with every divot and curve adjusted for the this toy's SD proportions. I especially like how the eyes have a subtle red outline around them to approximate the look of light up eyes. 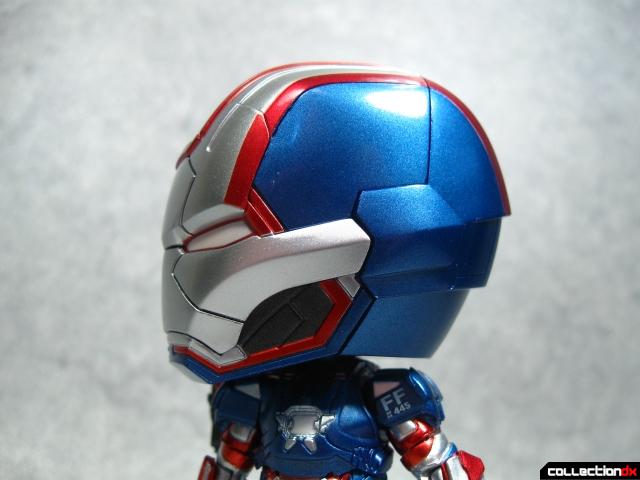 The head sits atop Good Smile's happy universal joint and can look left or right as well as tilt up and down. You may need to pull it off the joint to achieve more motion though. 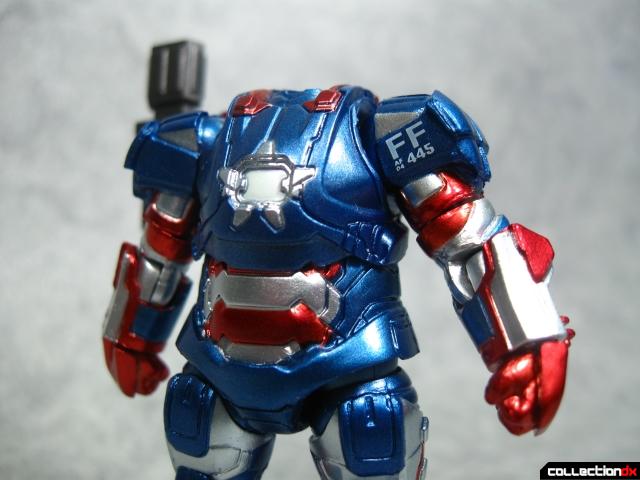 Removing the head lets us take a better look at the detailing on the figure's body. The star pattern around the Arc Reactor and even the fake "tail code" on the shoulder are fully realized on the Nendoroid. 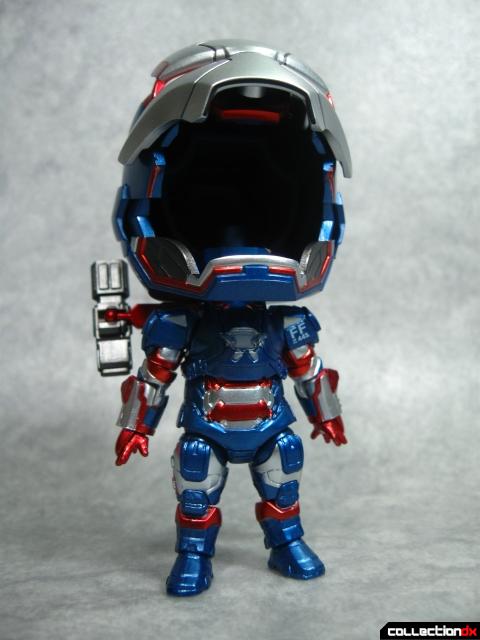 The removable face plate can be affixed to the helmet's forehead via a magnet. It's a neat gimmick that emulates the way this is done on Hot Toys' numerous Iron Man figures. Out of the package the Iron Patriot armor is unmanned. Now let's take a look at Colonel Rhodes in the suit... 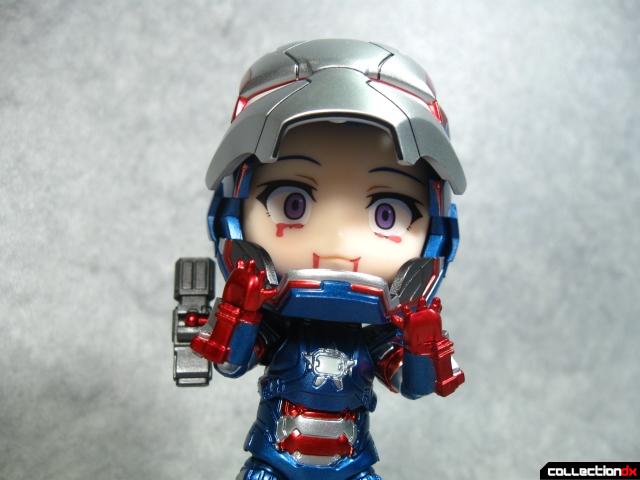 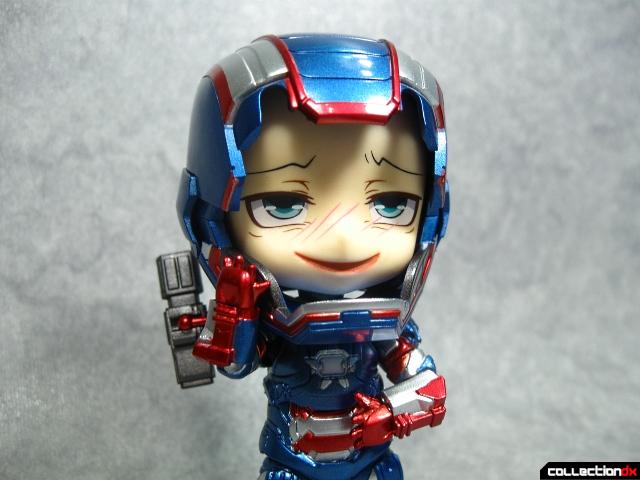 Hey get out of there! 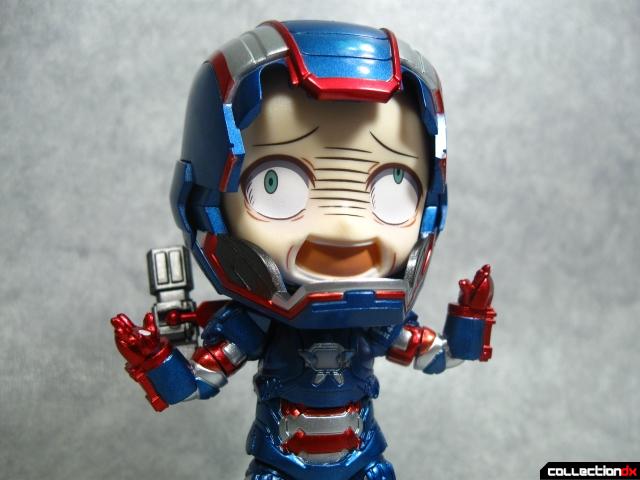 Somebody get me Rhodey... 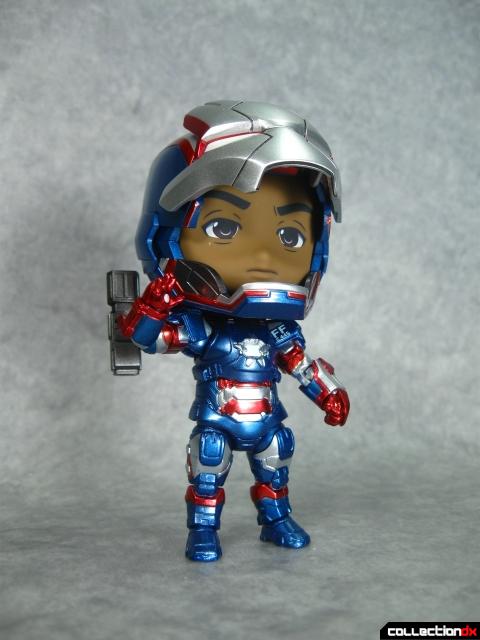 Oh thank heavens Colonel Rhodes has finally arrived to give us a respectful salute. 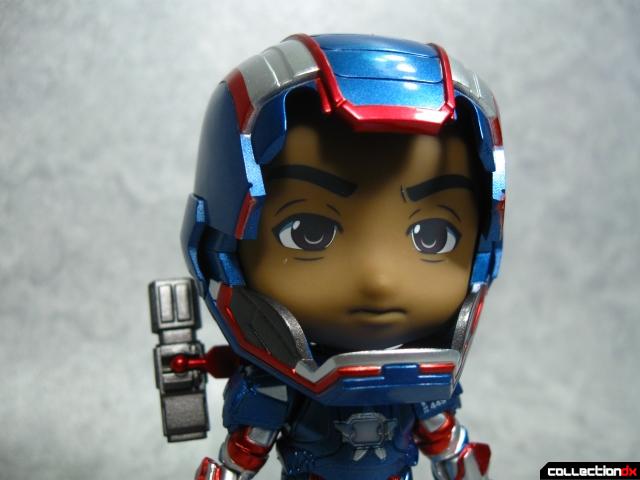 This adorable rendition of Colonel James Rhodes shows that even the star of "House of Lies" can be a cute little guy. Don Cheadle looks a little weary here with some wrinkles around his eyes and an expression that says, "I am not Terrance Howard." 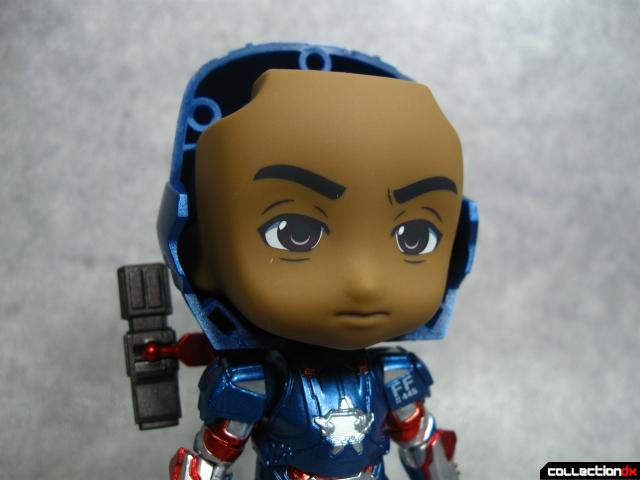 My one major complaint with this figure is you only get a single Rhodey face without an regular head to put around it. Like most Nendoroids, this face is compatible with other figures although there can be some fit issues due to tolerances between toys. 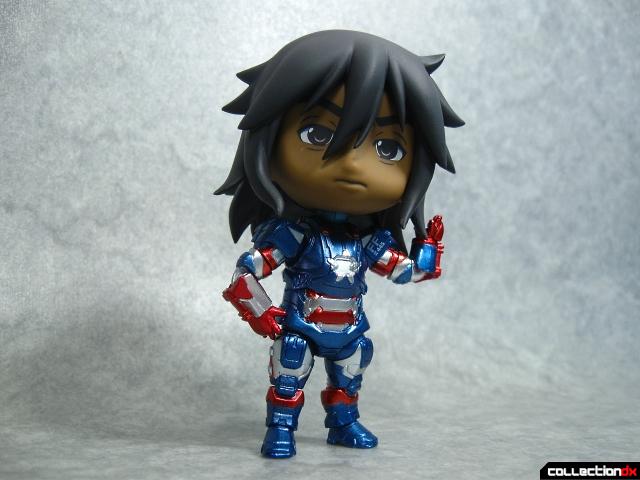 Still, this lets me give Mr. Cheadle a full head of hair. 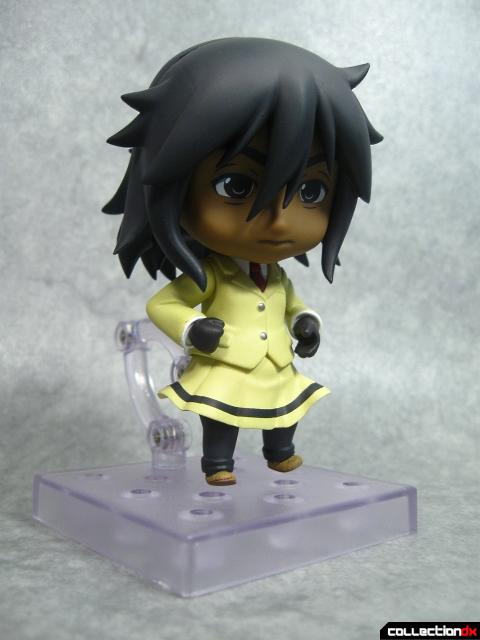 "Tony said the SKOOL Armor would make me feel 'pretty' but all I feel is socially awkward and emotionally unfulfilled..."

And of course the Rhodey face can be used with other Nendoroids. 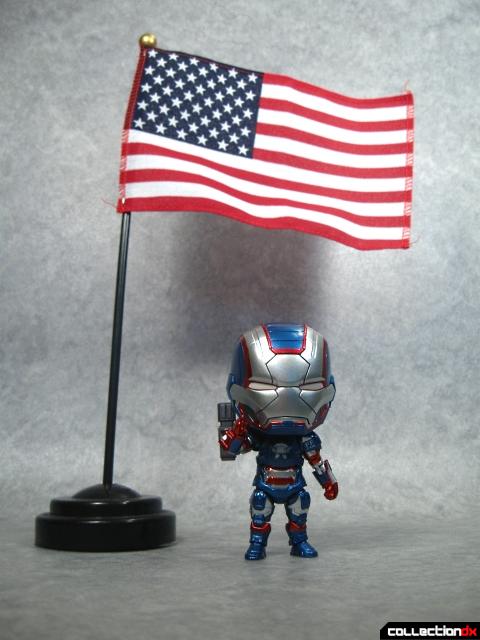 Overall the Nendoroid Iron Patriot is an outstanding figure that shows Good Smile is willing to go above and beyond so that their cutesy toys can stand toe-to-toe with more normal looking Iron Man figures. Everything works really well on this piece and brings equal amounts of fun and legitimate Shellhead action all in one adorable package. Iron Patriot looks great and his numerous repulsor blast accessories make him an excellent desktop defender. Even if you aren't normally a fan of Nendoroids as I am, I would say this figure is worth checking out. Especially if you love your Rhodey-kun.

2 comments posted
Do a review of that Tomoko

Do a review of that Tomoko one.

I'm glad you decided to go the way you did, though.