One of the newer third-party groups making Transformers figures is Unique Toys, and what's unique (pun not intended) about them is that they've formed a second group/label through which they produce MP-styled offerings, DX9 Toys. My first taste of what they've got: Invisible... 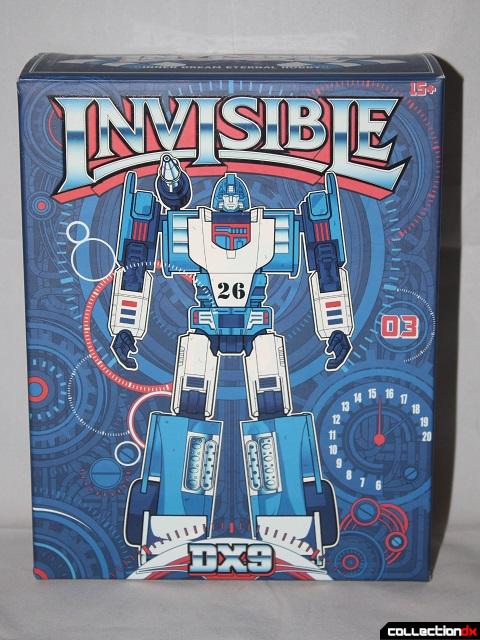 First impressions can be very important, so DX9 is off to a great start based on this box. To my uninformed eyes, this is a piece of art. There's a lot of energy in the image between the various dials, rings, meters, and blue. I get the feeling there's something humming here, which fits since this is about a robot that transforms into an F1 racer. Invisible's posture is simple, yet I can't help thinking of Da Vinci's Vitruvian Man. And more so, I'm clearly seeing something that's supposed to be the Autobot spy, Mirage. I got all of that on my first look, but it turns out there's a lot more going on.

Most of you reading this probably know that some of the earliest Transformers toys were re-purposed from Takara's Diaclone. And a couple of years before Transformers happened, some of these figures were released in Europe by a handful of companies. Joustra, a French toy manufacturer, was one of them, and when they imported Diaclone, they went all in. Rather than simply throw some translated text on reprinted boxes, they actually commissioned all new art that still looks amazing even by today's standards. They also crafted a completely original story told through mini-comics included with each figure. Yes, someone actually had the idea to turn these mecha into sentient robots before Hasbro. Now, things certainly worked out for Hasbro and Takara with Transformers. But I wonder what may have been if Joustra had been afforded a bigger platform to push their take on Diaclone, because they were on to something, and it was different from what we know as Transformers today. You can actually find translated versions of the comics online now, and they're worth a look. They're solid, but it's also a bizarre thrill to see who's fighting who, like Optimus Prime & Ravage versus the mini-cars. I can see why some collectors are diehard for these vintage pieces.

DX9 has crafted an obvious Mirage-inspired toy, but I think the aesthetics are more so based on the Joustra art, Joustra's existence as a French company, and the actual French race car Mirage and the Diaclone figures are based on. It starts with the font of Invisible's name up top. It's modeled after Joustra's Diaclone logo. 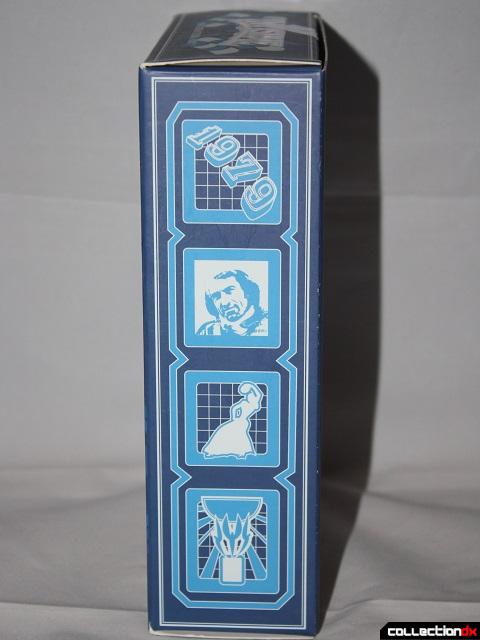 On the right side of the box, we see 1979. That was the first of two seasons the Ligier JS11 was actually raced. Next is a picture of Jacques Lafitte, the driver of the #26 car. Next we see a dancing gypsy woman, the logo of Gitanes cigarettes, one of the race team's sponsors. I'm not sure about the image at the bottom, but it could be a trophy, which furthers the racing emphasis. 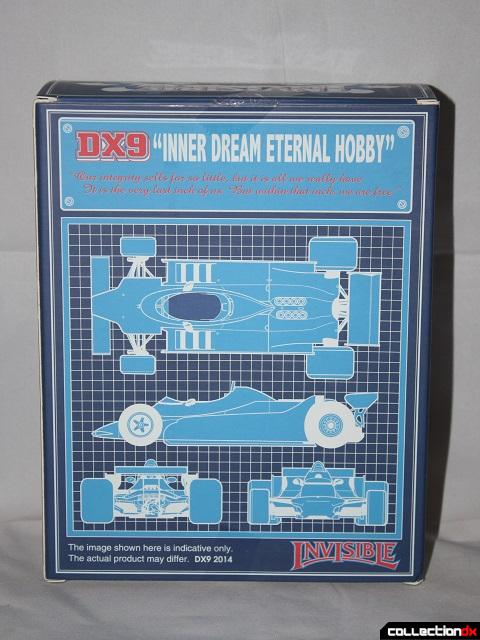 On the back are blueprint style profile shots of the car mode. I suppose "INNER DREAM ETERNAL HOBBY" is the slogan for DX9, but the quote below is actually from V for Vendetta:

"Our integrity sells for so little, but it is all we really have. It is the very last inch of us. But within that last inch, we are free."

It makes sense in the context of the movie and comic, but I can see it being applied to the thrill of car racing too. 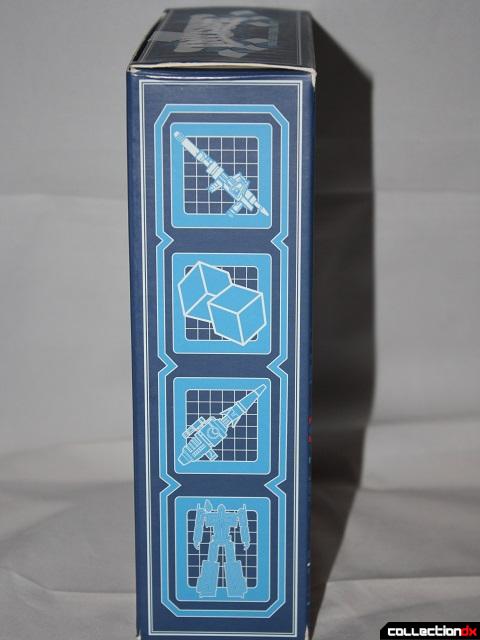 On the left side, we actually see things related to the character, including his weapons and a couple of energon cubes. The cubes could be a generic reference, but maybe they're actually a nod to the G1 episode "Traitor", when Mirage steals the two cubes in an attempt to pit the Insecticons and Decepticons against each other. 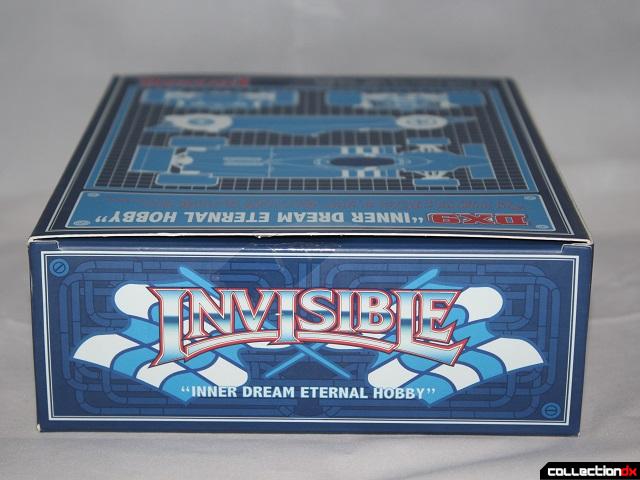 Up top are a couple of checkered flags, the most obvious racing nod. 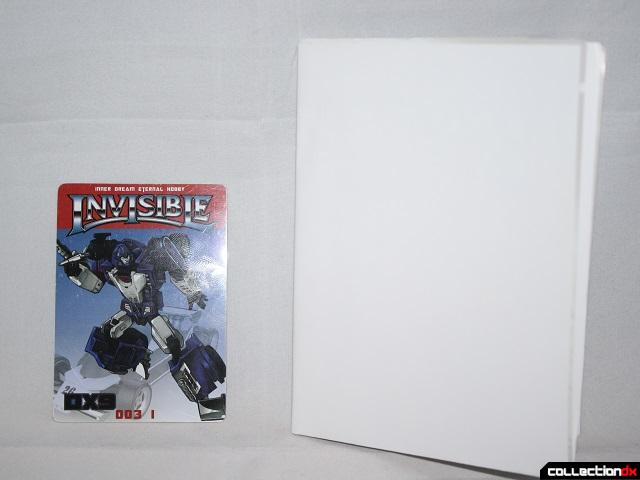 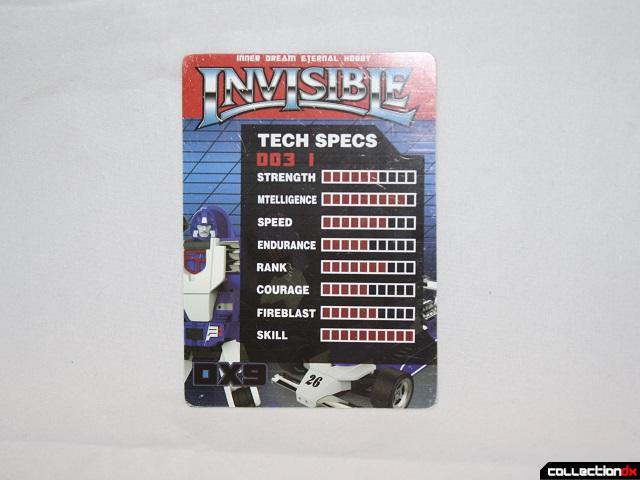 Additional contents include instructions and a sturdy trading/spec card. 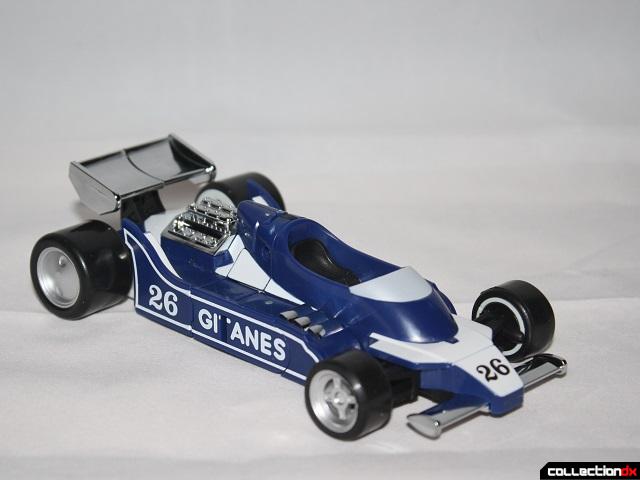 The alt mode is very clean. Remove "Gitanes" from the side and you've probably got the vehicle before all the sponsor logos were added. In fact, the only detail that doesn't seem to match the real thing is the rear hubcaps. There's just enough chrome between the front end, vents, engine and spoiler to make for a very sharp look. The tires are rubber, plain and smooth, which is what some F1 tires are like on the surface area. People debate why this shade of blue was used, but it does seem to match Mirage from the cartoon, which is something other depictions haven't always done.

The wheels roll well and everything holds together, so the alt mode's on point to me. I'd like the rear end to be tighter, but there's nothing missing here. Still, I enjoy detailing, so the following pics are after I added stickers from Reprolabels, giving the toy a little more G1 and sponsor flavor. 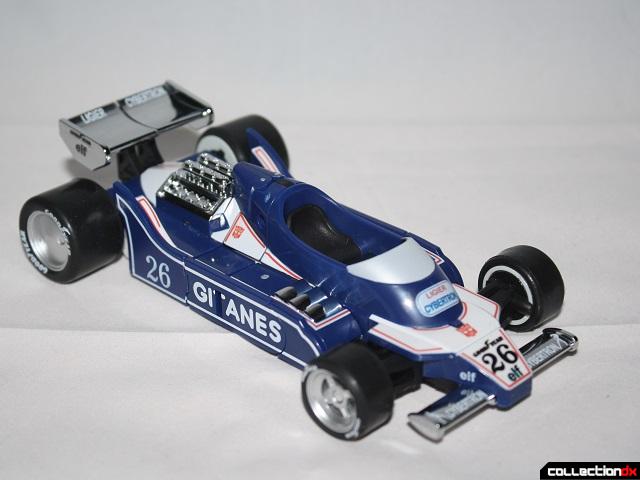 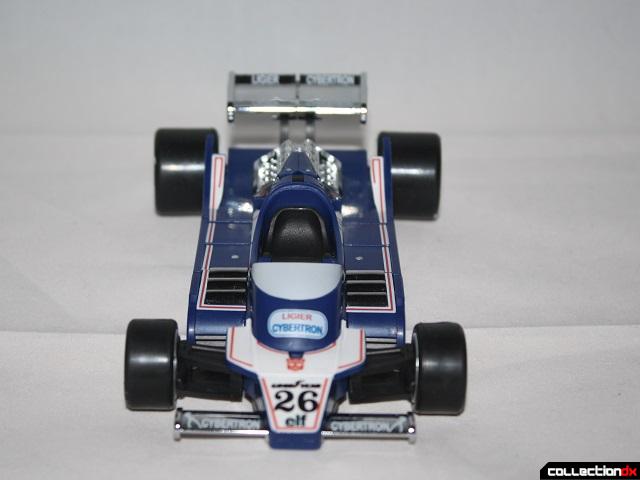 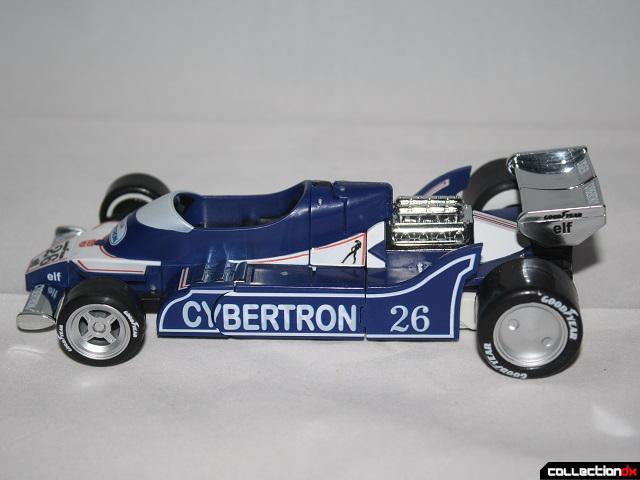 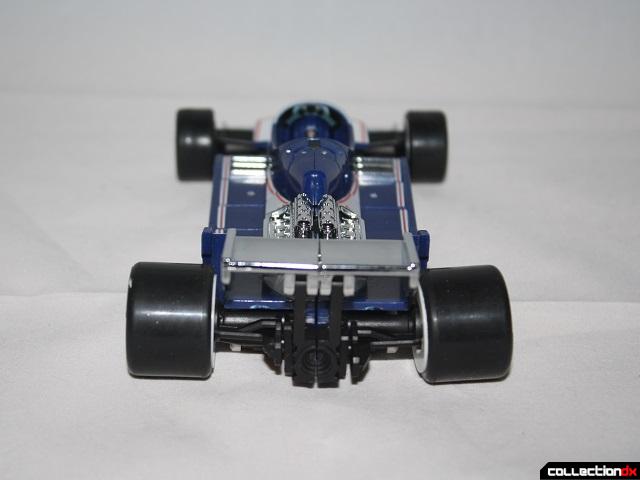 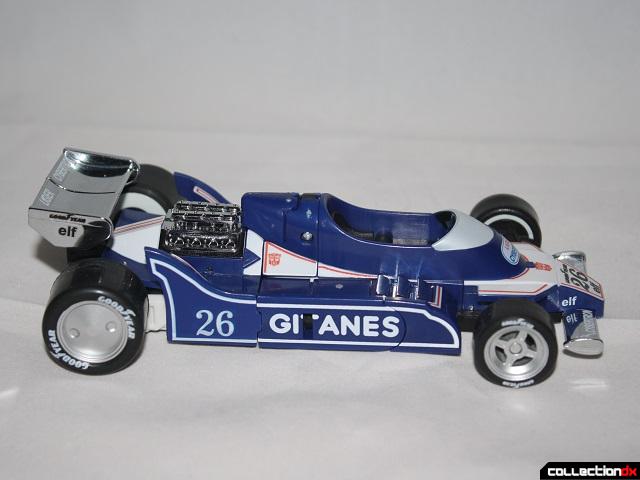 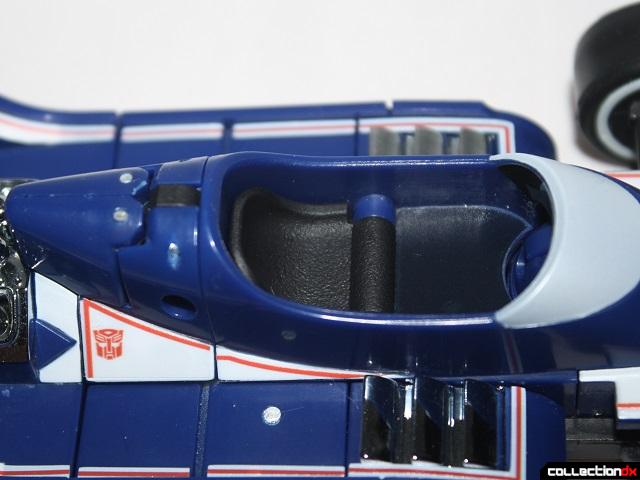 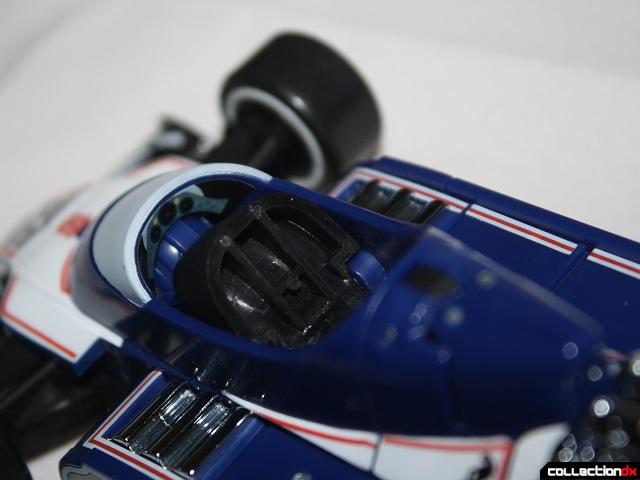 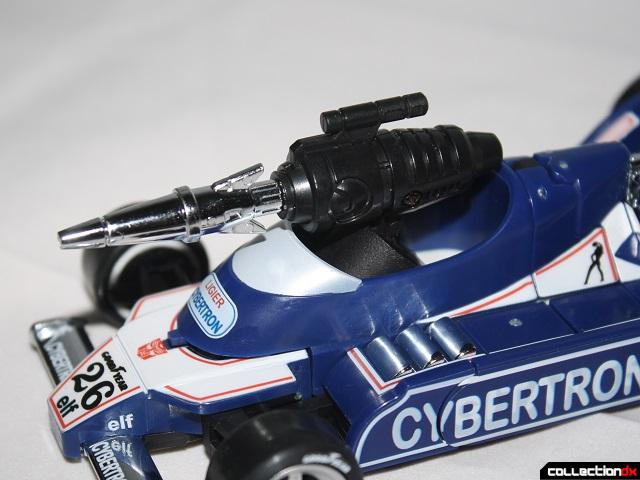 The one gimmick lies in the cockpit. You can flip the driver seat over, revealing a peg hole you can use to mount the missile launcher. Between the seat and the peg's ability to tilt forward and back, you've got options for how to angle it. This is a nice contrast to the (as of this review) upcoming Sphinx from Mastermind Creations, who appears to come with a removable driver. 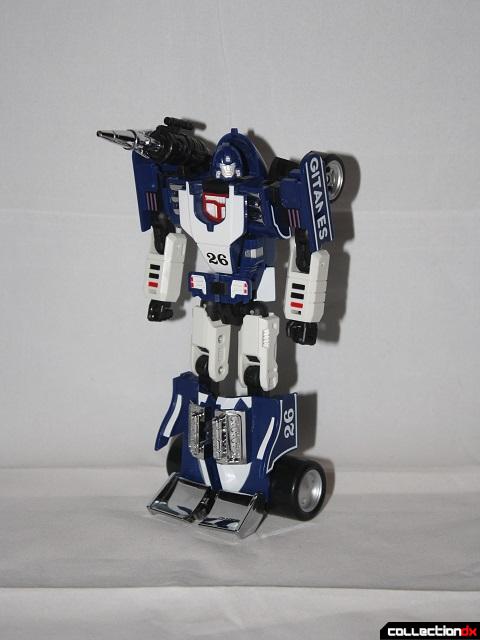 In robot mode, I still see Mirage in Invisible, but he's a little more dynamic with the colors added by his forearms, midsection, and chest. The one thing that looks really different is the lack of nose fins protruding from the middle, but it keeps his form lithe. In fact, he has a similar figure to the Joustra art, sort of lanky and lean. Transformation is smooth and fulfilling without being complicated. But there is one hassle in the rear wheels. Going from alt to robot mode, they need to be pushed to the inside on the axle and rotated a certain way. In this instance, it's not too hard. But in going from robot to alt mode, you have to pull the wheels back out, and it's uncomfortably difficult. It may feel or look like you're going to break something before you hear a clicking sound and see that the wheel has been pulled back out. Do it slowly with gentle force and you should be fine.

Overall, I like what I see, though for some reason the hood behind his head sticks out to me. Once again, the following pics are with stickers applied. 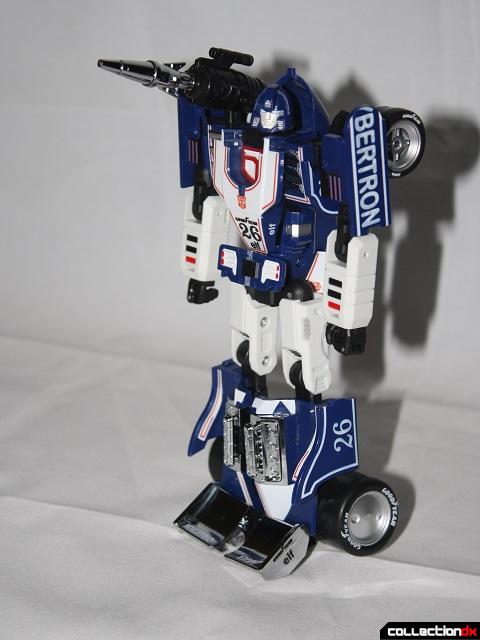 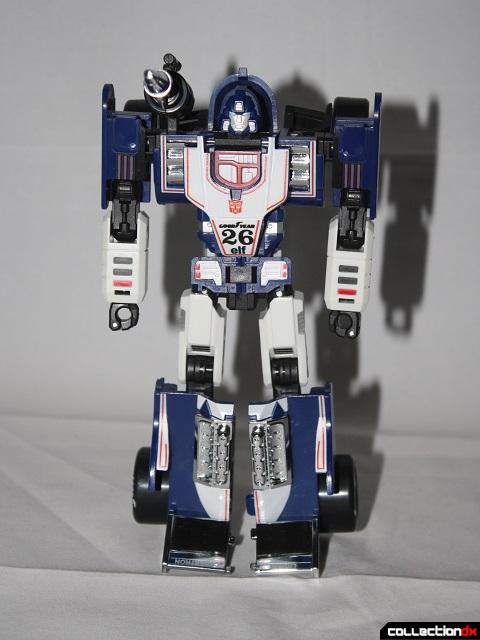 Invisible is around 6.5-inches tall, so he fits in with the MP Autobot cars in size. His articulation is also comparable, with tilting toes, double-hinged knees, a swivel waist, ball-jointed shoulders, swivel biceps, hinged elbows, ball-jointed wrists, and open/close hands. His head is also on a stiff ball joint and can be turned and tilted, its only hindrance is the hood behind it. 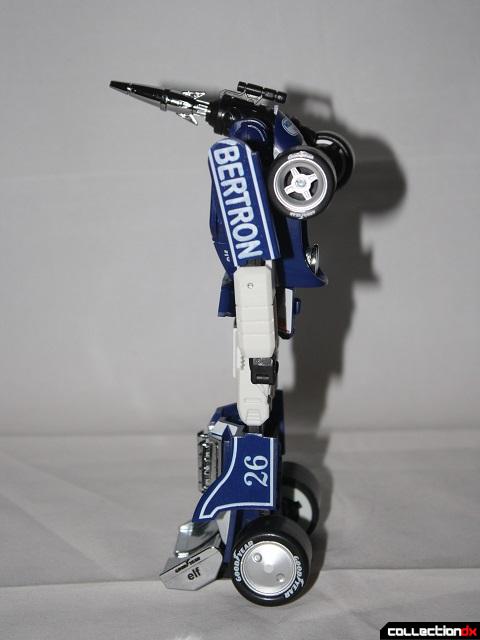 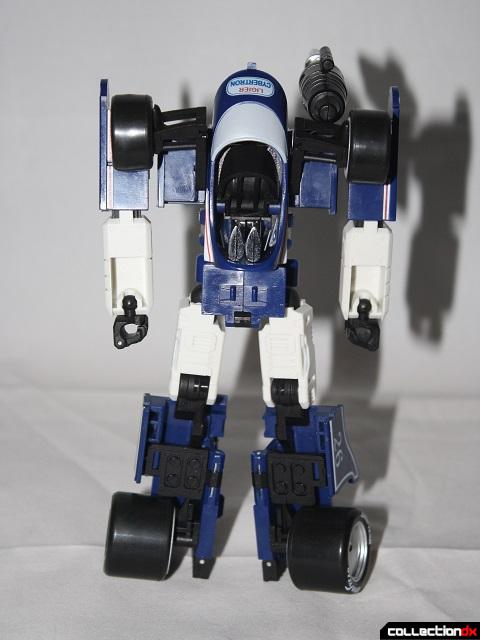 He looks good at any angle, but there are noticeable cavities in his forearms. Since they're occupied by his hands in alt mode, I'm okay with them. 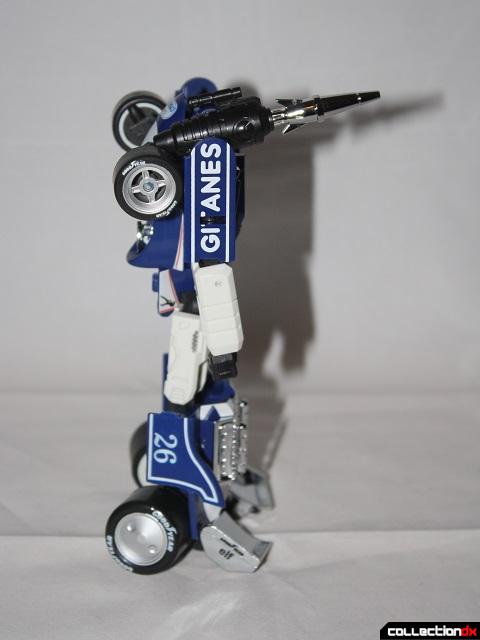 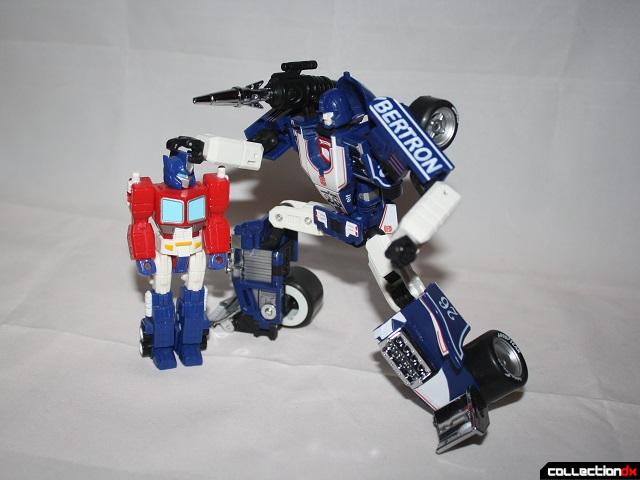 Action Masters are such a rare sight, so Invisible is compelled to give him a closer inspection. 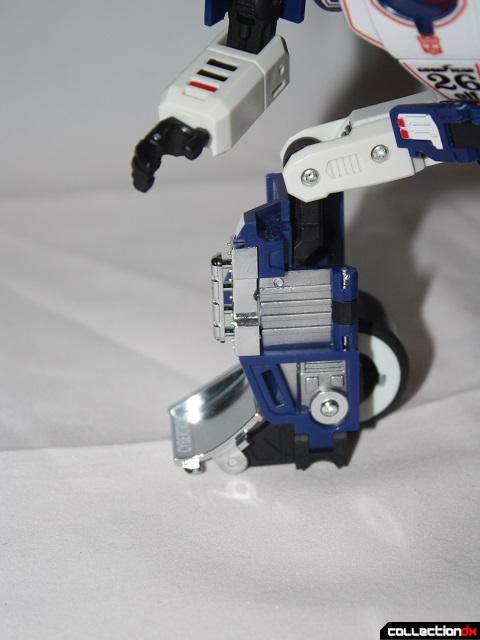 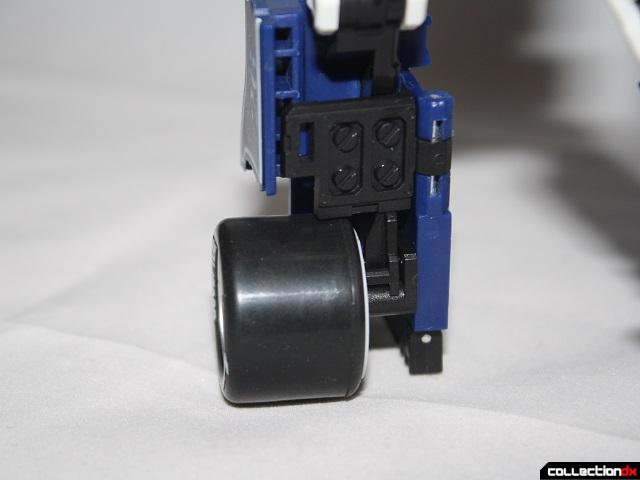 Check out those lower leg details. Besides these rear wheels and partially because of them, another minor gripe is that Invisible can have difficulty standing up straight on flat surfaces. I haven't tried carpet yet, but I suspect he'll do fine there where other figures struggle. Any other kind of pose is easy, but getting him into attention takes a little fiddling. 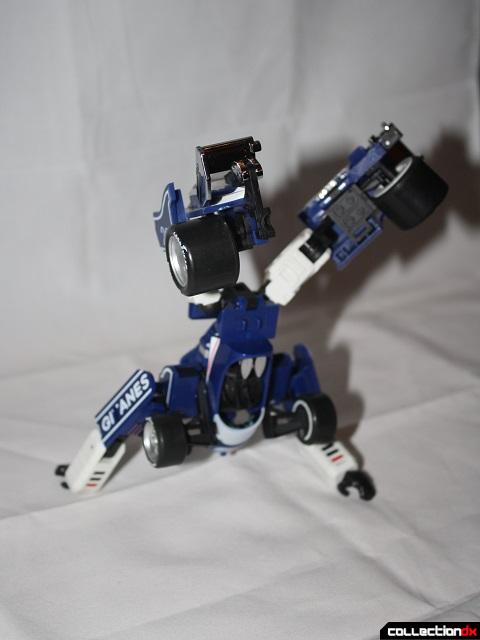 Even so, that doesn't hinder him from getting down. Yes, he's doing a handstand, and no, none of his upper body is touching the ground. It's just his hands and some of his left forearm. Mirage doesn't like to fight, but that doesn't mean he isn't good at it, so Invisible is on the money with the acrobatics. 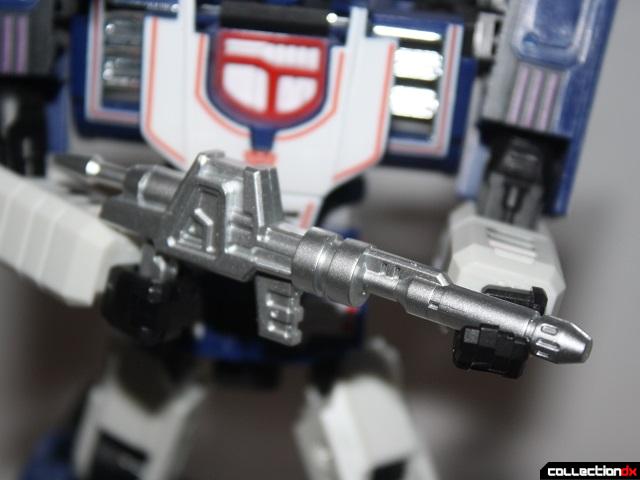 For weapons, Invisible keeps it classic. He has a gun that's a pretty faithful take on Mirage's rocket-dart hunting rifle. It fits into his hands so well that he can hold the rear grip without closing them. 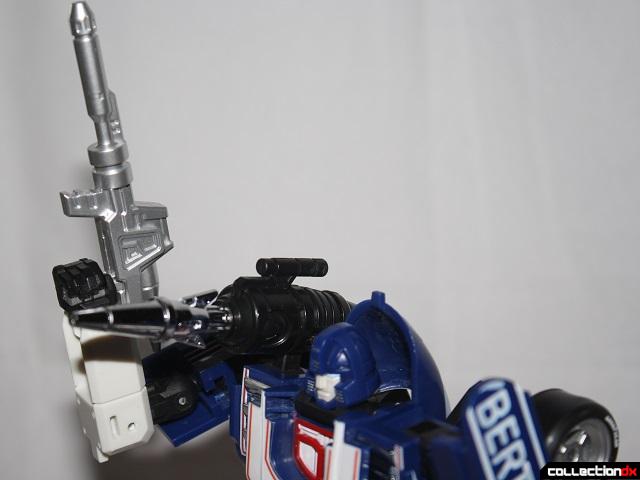 He also has a shoulder-mounted missile launcher that can be set on either side of his head and tilted as desired. Almost all the Autobot cars from 1984 had such a weapon, but Mirage is one of the few who's always featured with his equipped, so it's important and cool that Invisible has it to complete the ensemble. 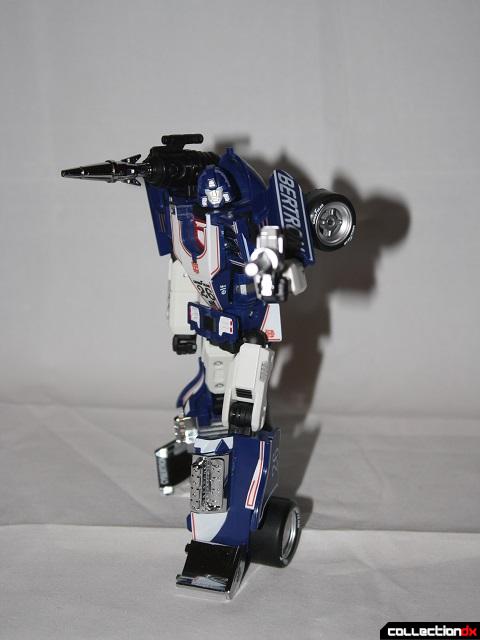 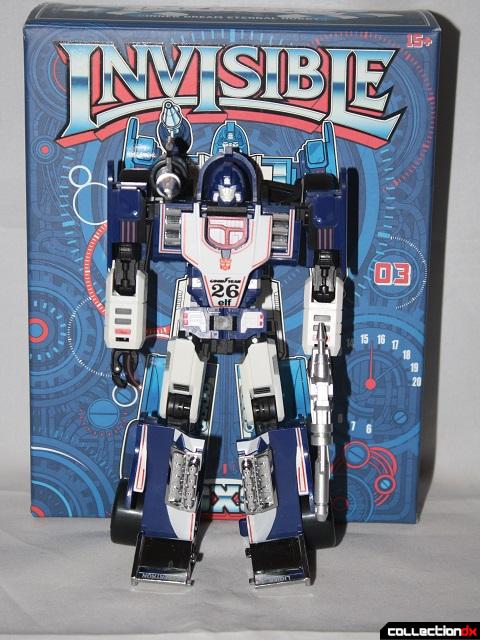 Invisible isn't perfect. He has a couple of minor issues, and where he takes his design cues from may not be everyone's cup of tea. It's a safe bet that if Takara ever does an MP Mirage, he's going to be as close to the animated character model's robot mode as possible, while also striving for a replica alt mode. Mastermind Creations is also on the way with their MP-styled Sphinx, who's based on the artwork from Studio Ox and will cost about the same.

But that said, Invisible was here first and that can't be denied. At $85+, he runs about as much as the MP Autobot cars, and while he does look a little different from them, I think that's for the better and helps him out. If you're an MP Transformers fan, 3P enthusiast, or Mirage lover, he'll probably make you happy. It seems like retailers are starting to sell out of their stock, so if you're interested, you may want to move on him soon. There's also a transparent "Phantom" version that was limited to 1,000 pieces, which currently costs the same. Bottom line, he is a good get.