Domon Kasshu is the main character of Mobile Fighter G Gundam. With his mother dead, his father cryogenically frozen and his brother on the run after stealing the Devil Gundam, Domon Kasshu joins the Gundam Fight in order to set things right.  The Gundam Fight features a myriad of multi-cultural (and often hilariously stereotypical) Gundams. Domon Kasshu begins the Gundam Fight with the Shining Gundam. Then during the course of the show, Domon upgrades to the God Gundam (known as the Burning Gundam in the US dub).

The Robot Spirits version of the God Gundam has a sleeker and leaner build than it’s on-screen counterpart. Even the midsection has been stretched out a bit. 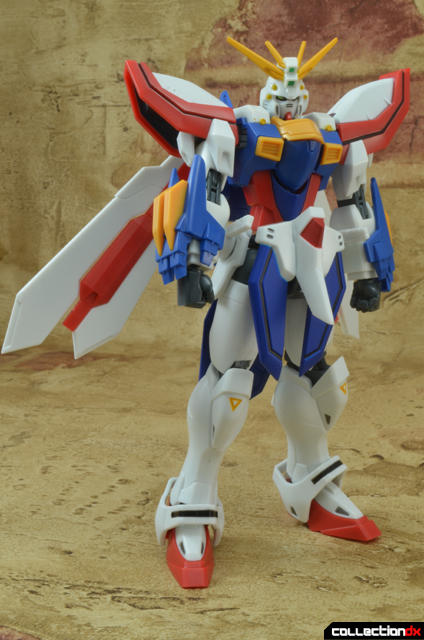 One thing I noticed immediately is how the white pointy piece of the front skirt points down diagonally. It really should point downward without sloping forward. 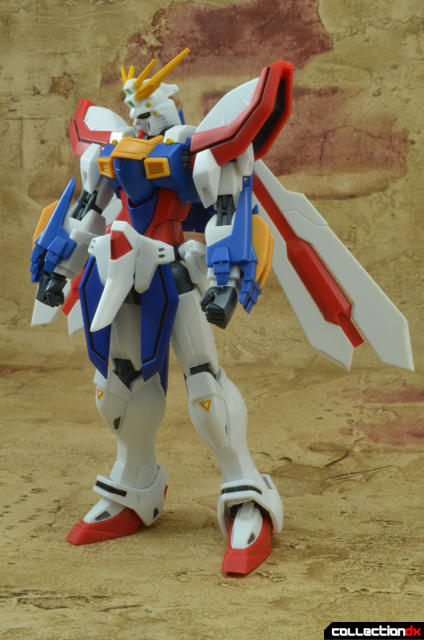 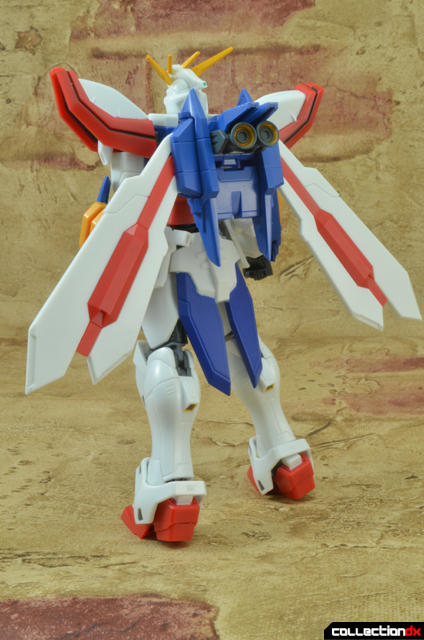 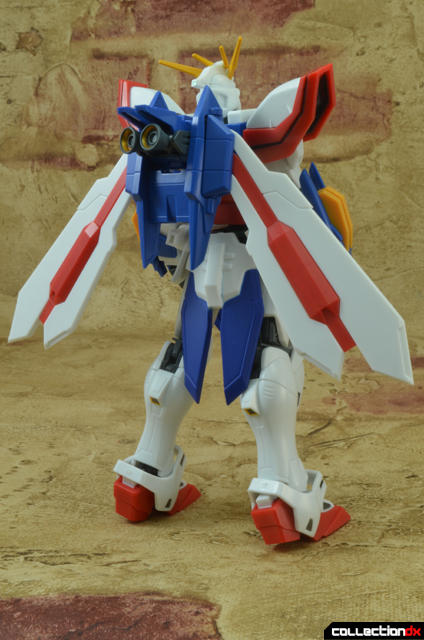 In the show, the God Gundam used the Trace System to emulate Domon Kasshu’s martial arts moves. So one would expect that the Robot Spirits God Gundam should be able to move well, allowing the toy to be posed in many great martial arts poses. This release is successful at delivering such a toy.  Articulation for the God Gundam, is superb, as it should be. Although God Gundam has a ton of nice points of articulation, I am only going highlight the ones that stood out to me.

The Core Lander's  fins can expand out, just like in the show. 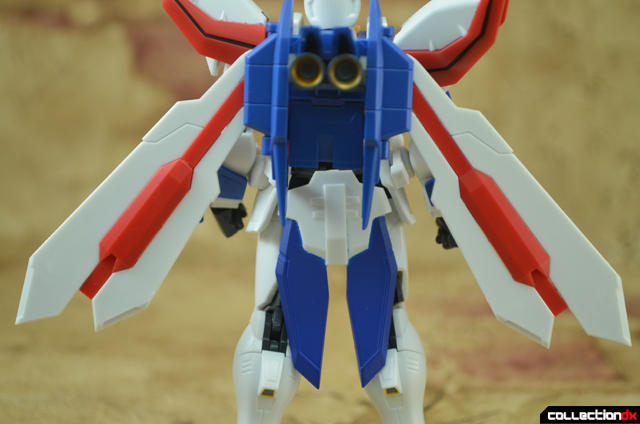 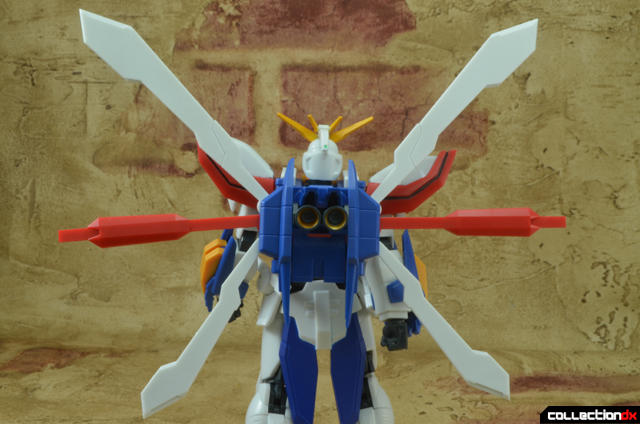 The body of the Core Lander can also flip up a bit. 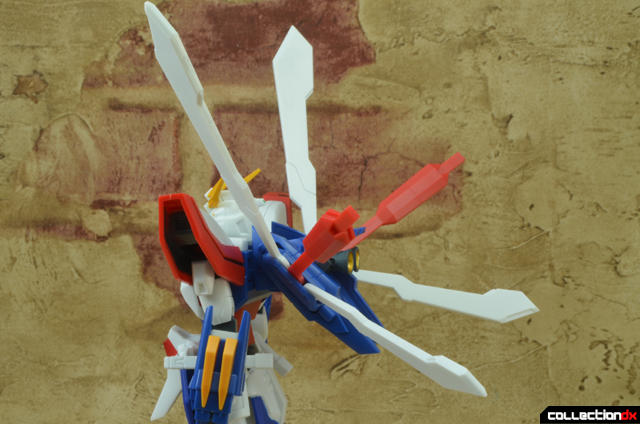 The midsection has a nice ab crunch that can help facilitate the expressiveness of the God Gundam. 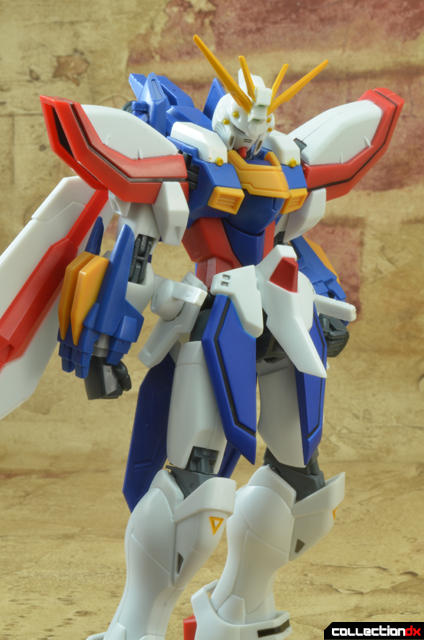 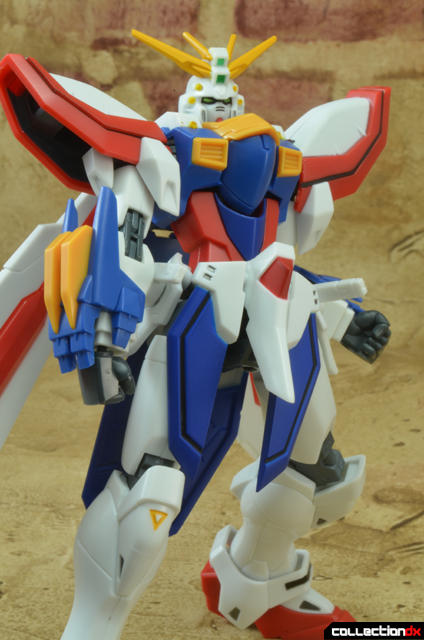 The circular sword holders on the sides can move forward and back substantially. 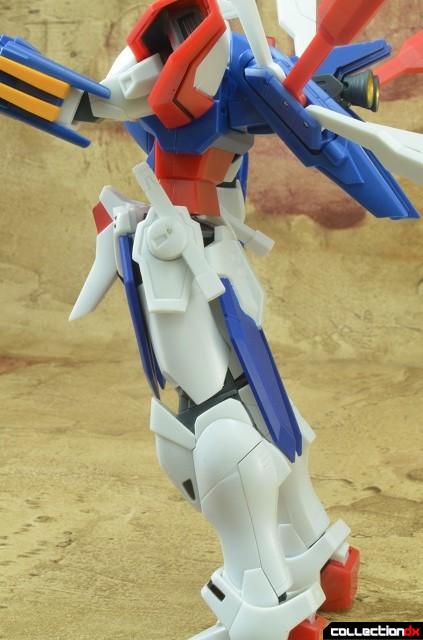 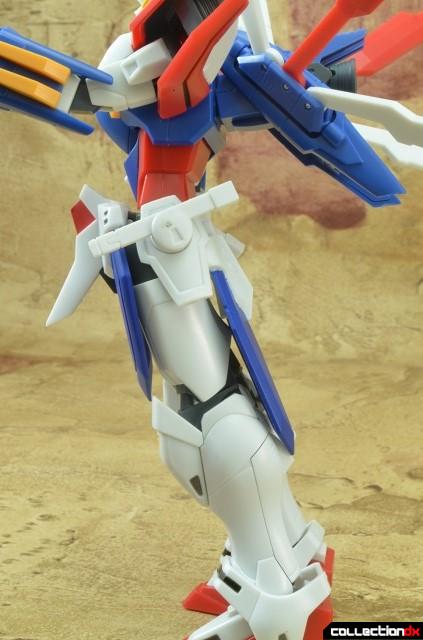 The God Gundam takes a knee with very little effort. He has a good amount of joints in the legs and all of the skirts can move independently in order to free up the legs. 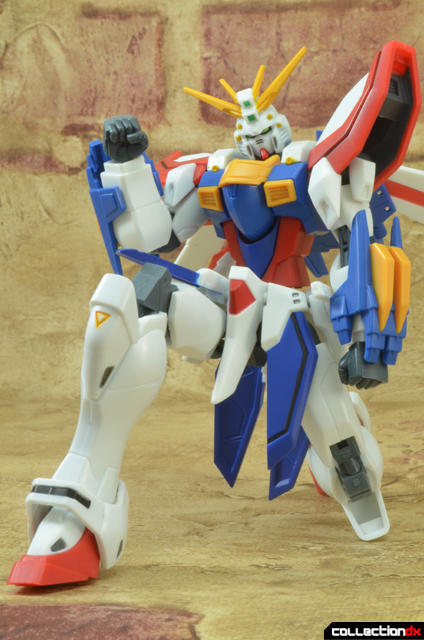 The legs can spread out enough to allow the God Gundam to do the splits. The front part of the feet can even fold down a full 90 degrees. 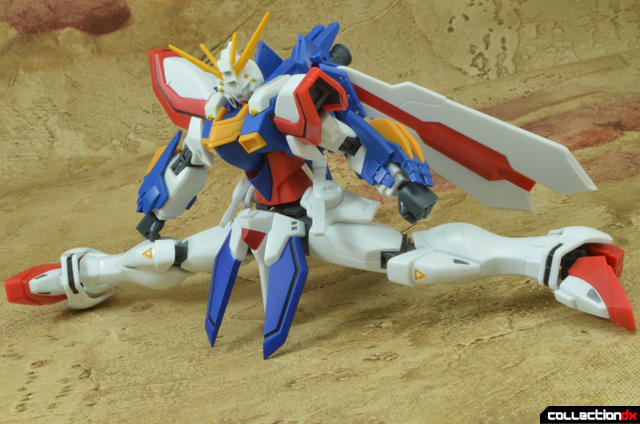 The balance of the figure is pretty good. Just check out the God Gundam doing a high kick. 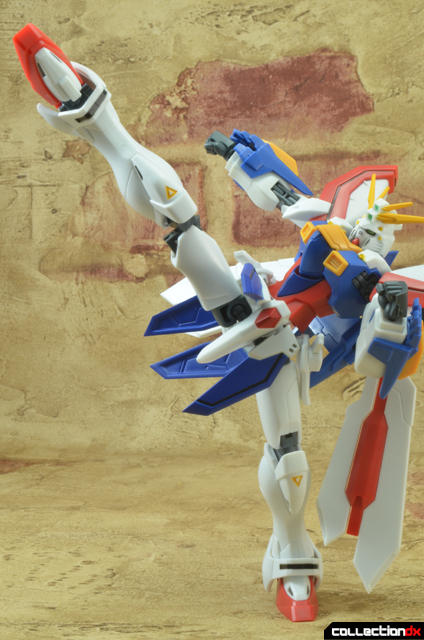 Unfortunately, the thigh joints on my God Gundam became rather loose during the review process. This made even some simple posing a tedious experience, as the God Gundam’s legs would begin to split and the toy would flop over.

By the end of the review process, even a stance like the one below would become too much for the toy to handle. 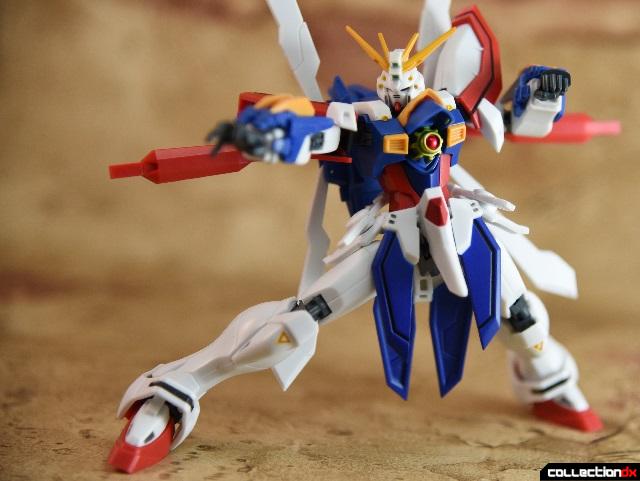 Included with this release is the halo that is created by the fins when the God Gundam goes into Hyper Mode. Also included is an opened chest piece that is also for the Hyper Mode. 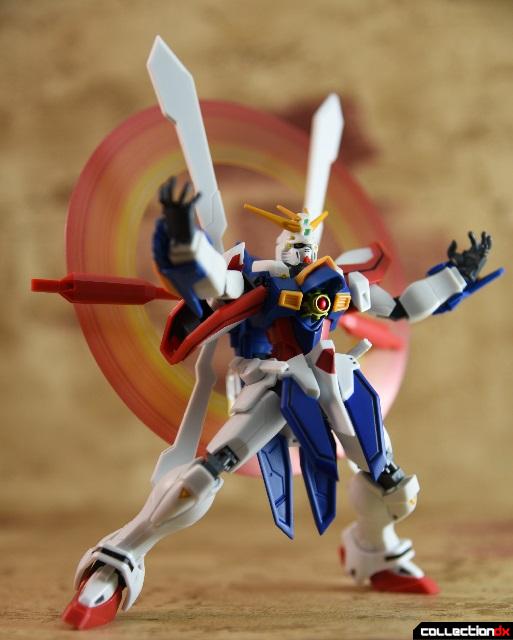 The halo attaches to the God Gundam’s core lander via two connector pieces, one clear and one grey. 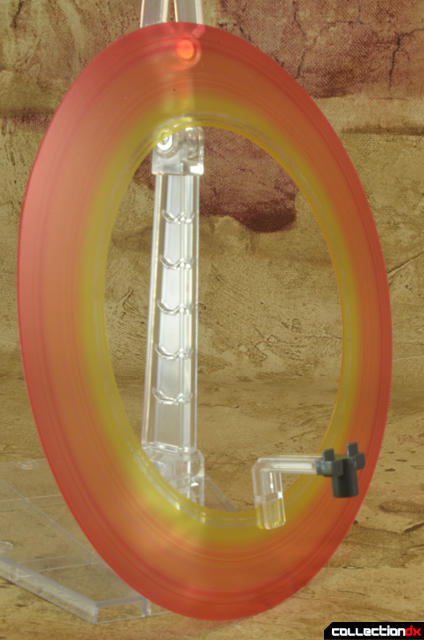 The grey connector piece also has a hole at the bottom, so that you can attach the God Gundam to a Tamashii Stage stand. 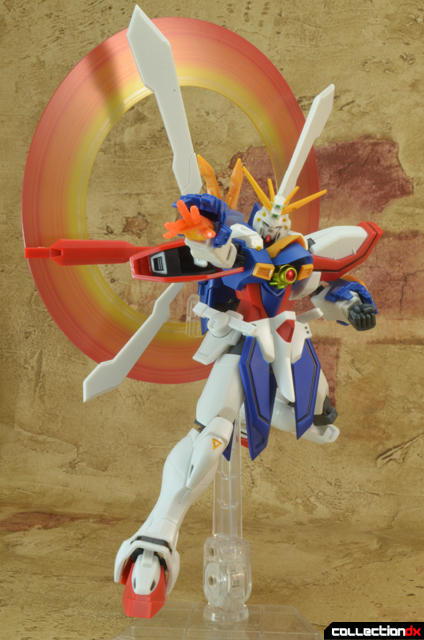 Also included are gauntlets with extended fingers and spikes, and glowing hands to allow the God Gundam to perform a couple of its signature attacks.

This hand of mine glows with an awesome power; Its burning grip tells me to defeat you! 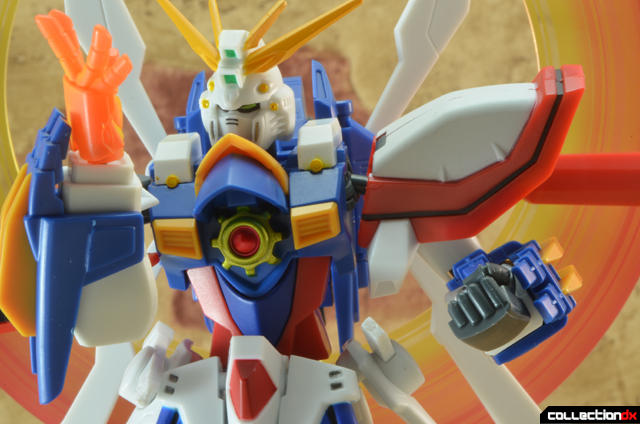 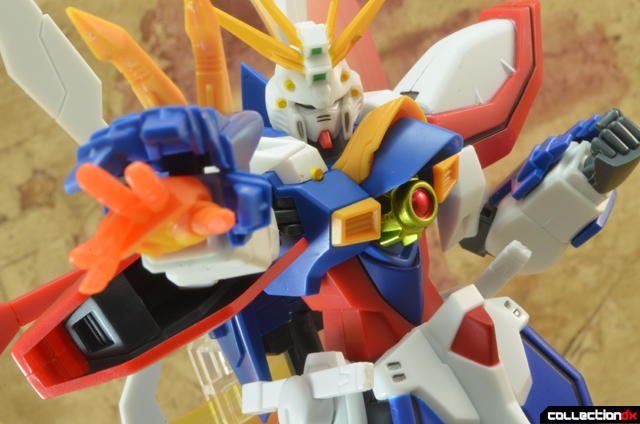 But that's not all!

The school of the Undefeated of the East... The ultimate technique! (Until Domon learns the powered up version.) 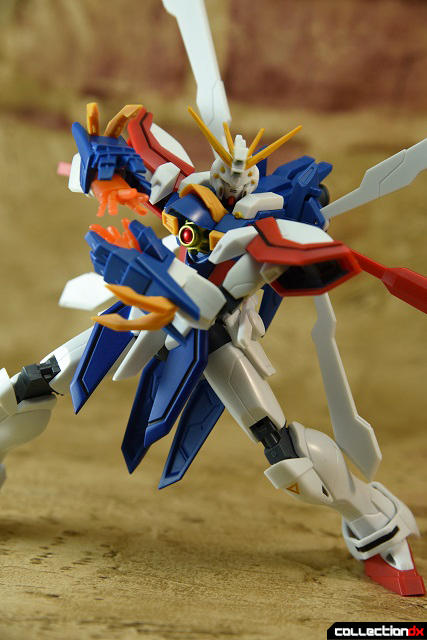 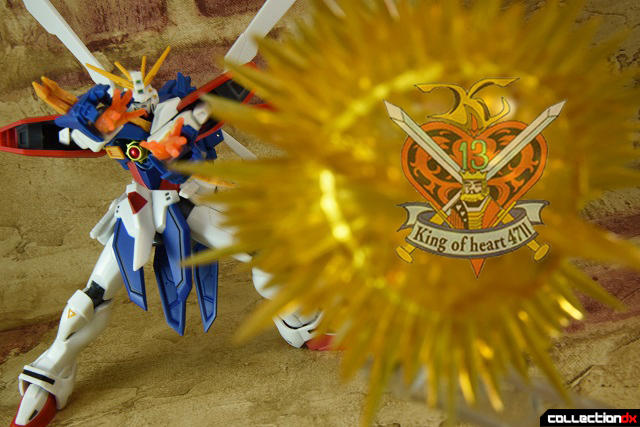 *Effect part is on loan from Shin Getter 1. King of Hearts logo appears courtesy to Photoshop.

Finally, the God Gundam comes with a couple of beam sabre energy blades to attach to the hilts. 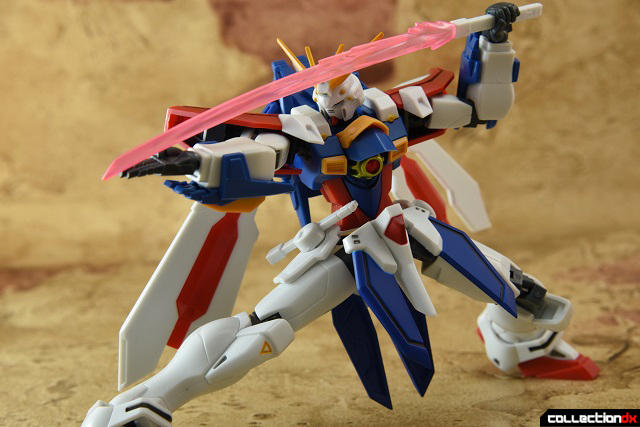 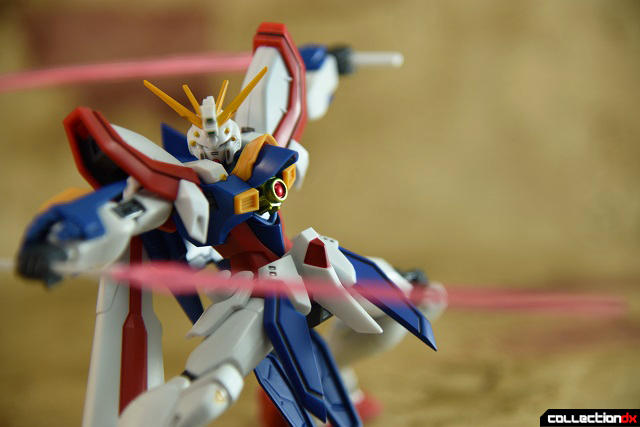 In total, you get 5 sets of hands that have been featured in the review; so I didn't bother to just take of picture of the hands this time around. 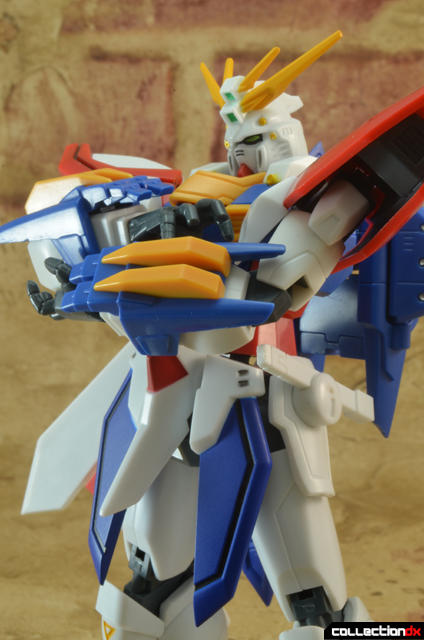 All in all,  God Gundam is a great release. I can only really complain about the looseness of the thigh joints and that the gauntlets would come off rather easy. Otherwise, I had a great time playing around the Robot Spirits God Gundam. I really hope that Bandai releases the rest of the Shuffle Alliance and some of the other more memorable (yet kind of racist) Gundams from G Gundam. C’mon Tequila Gundam!

9 comments posted
Great review! And do a Robot

Great review! And do a Robot Damashiis usually get this loose after a while? I want to get into the line as Gunpla arent very good as being action figures. And if I do get one, I can't decide which one to get...

Not really. From what I can recall, this is my first Robot Damashii that has had a big issue with loose joints.

this is the first God Gundam with nice looking halo effect part ( I've been waiting for it for 20 years!), and it fits on HGFC Master's horse ( you can somehow twist the back armor to the side ), it's better to show on a flying stand than standing still.

The back skirt armor on the RD Strike Dagger pops off too easily and the thigh swivel is loose on the RD F-91 but these might be isolated issues on my figures.

If you want a really good RD to start with, I highly suggest the GM Sniper II, the Wing Zero Custom and any of the versions of the Unicorn Gundams out there.

Thanks for the advice, guys. I think I'll get the GM Sniper II or the Unicorn since they're some of my favorite designs.

Nice review!
That croth armor is quite disturbingly shaped..reminded me OF some ZOE stuff.

Agreed. Unfortunately, I couldn't make a cockpit joke with the God Gundam.

Am I the only one that thinks the photos are crazy-blurry?

I took a few of the shots with my new camera. Since I wasn't as familiar with the new equipment, those pictures have a shallow depth of field, resulting in a "blurrier" look for the planes that the camera was not focusing on.