Getter 1 is another release from the collaboration between Sentinel and T-REX. While the two toys share a lot of the same components, it feels like an entirely different toy.

Getter 1 arrives courtesy of Zwyer Industries and is available at www.animebooks.com and www.robot4less.com

The toy comes packed in a classy cardboard box with flip top cover, similar to the Black Getter. The cardboard is still a little flimsy and shows wear easily. 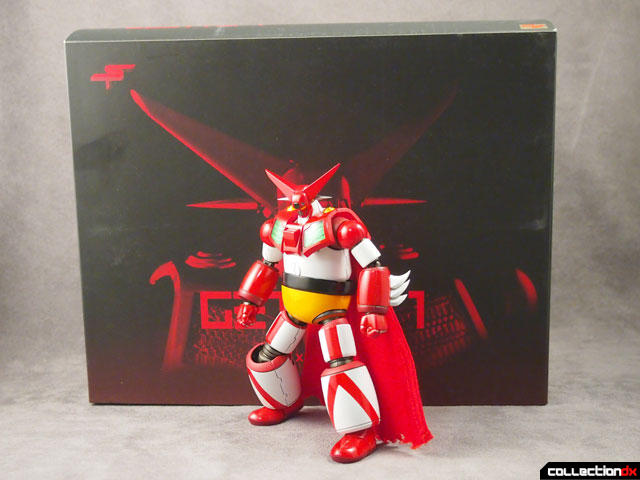 If you've already got the Black Getter, you won't be disappointed with the quality here, it's the same basic body although done up in a different paint scheme. What's different here is lower legs, forearms and head sculpt. 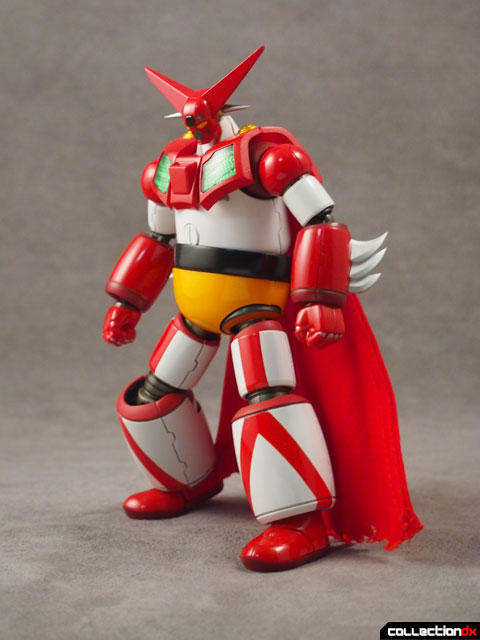 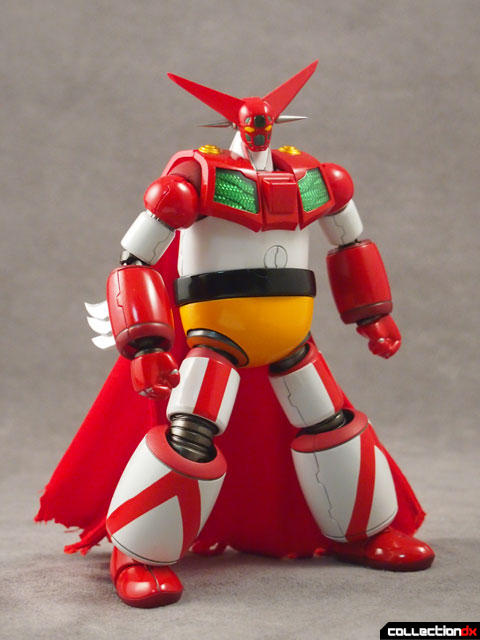 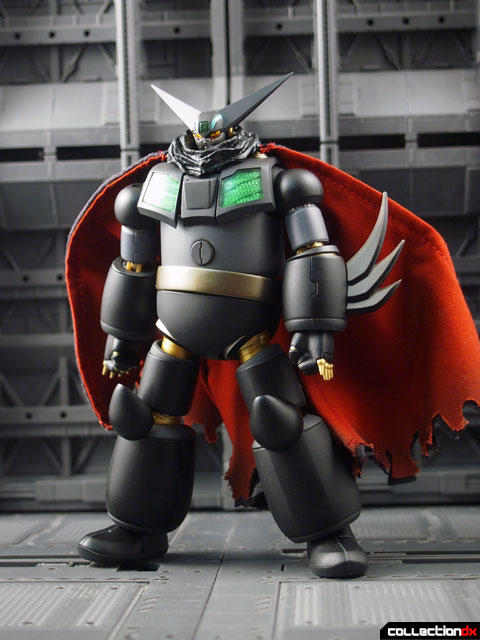 The articulation is awesome, with a revolutionary joint system. The elbows retain the same pull out segmented arm system. I think it looks a bit better in brass like the Black Getter, but you can't deny it's effectiveness. 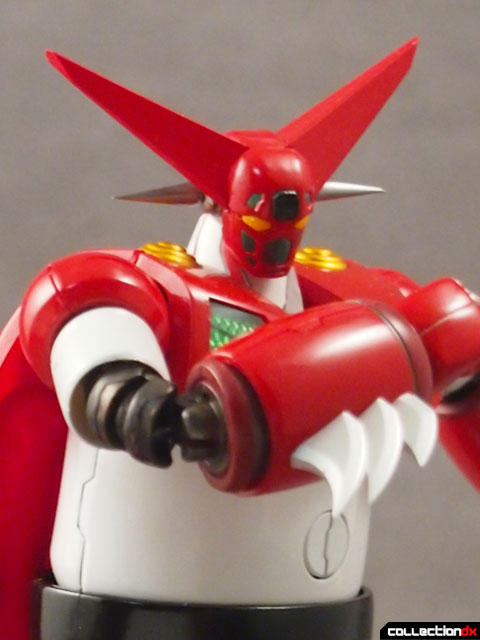 I mean any way you want this to move, it moves. 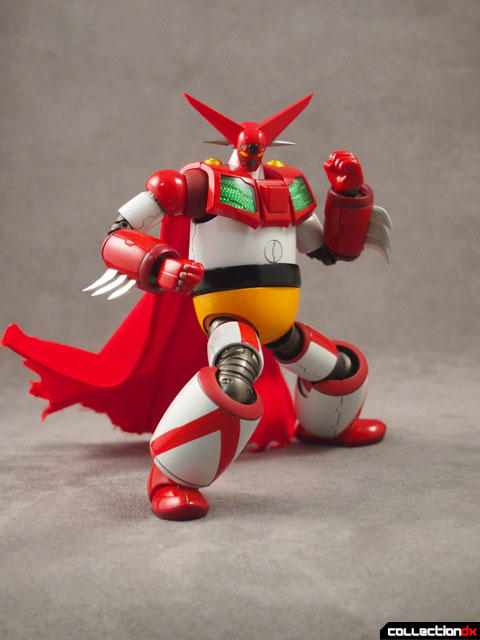 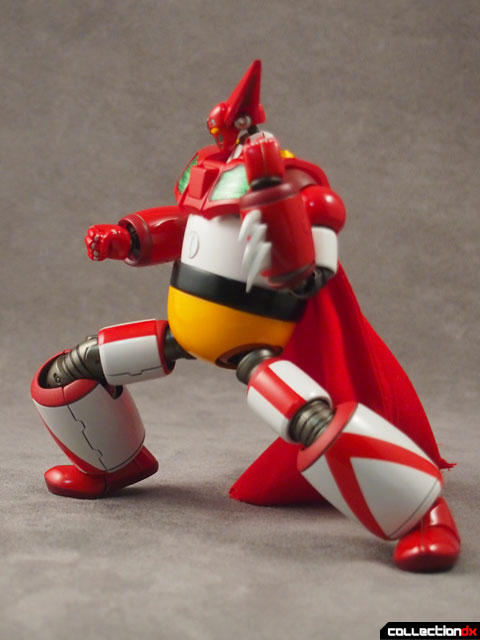 The cloth cape has wires in the edges to help it sustain a pose. The cape is adhered by a fabric loop that slips around the center panel on the back. 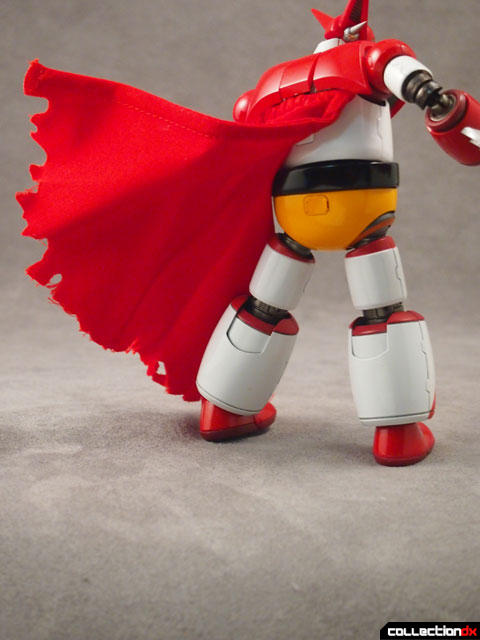 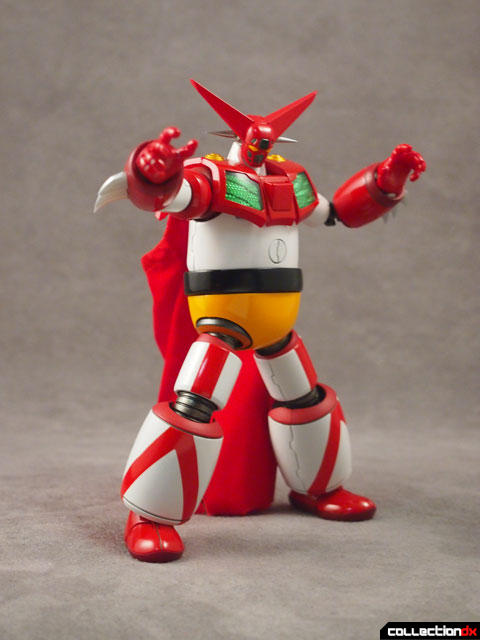 Getter 1 comes with two large white machine guns (all plastic) that can be held in either hand. These guns are awesome looking. 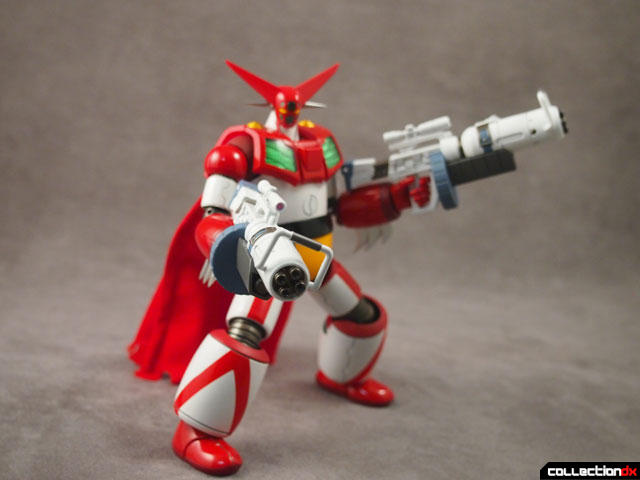 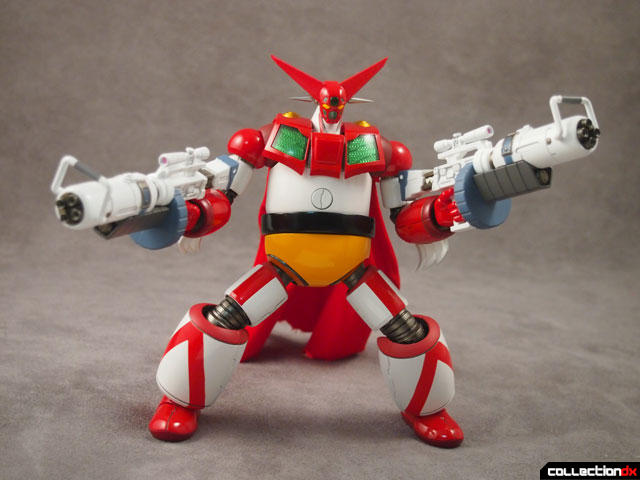 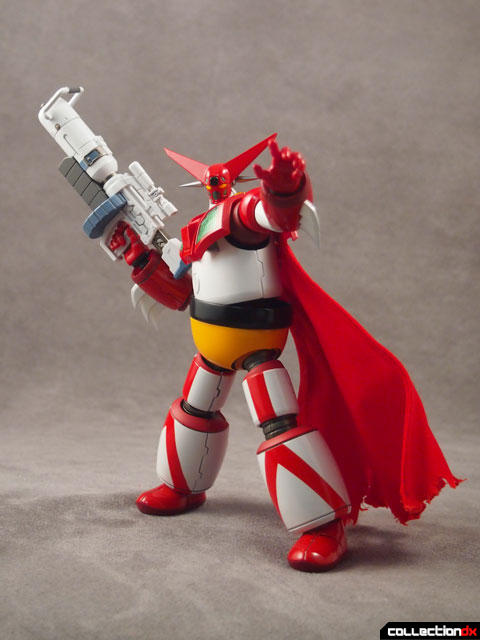 I like that you can hold one gun with two hands. 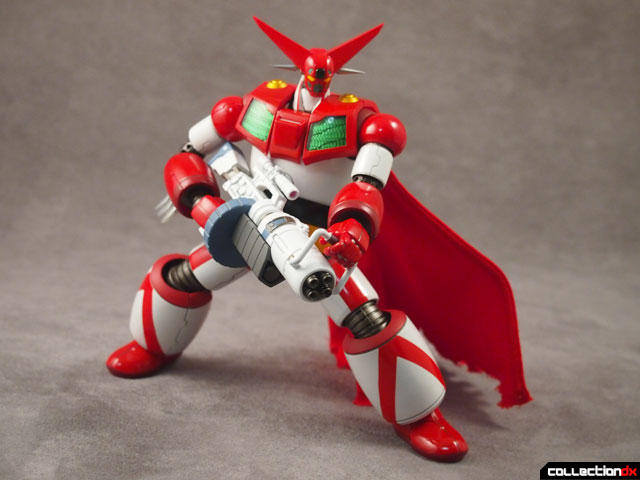 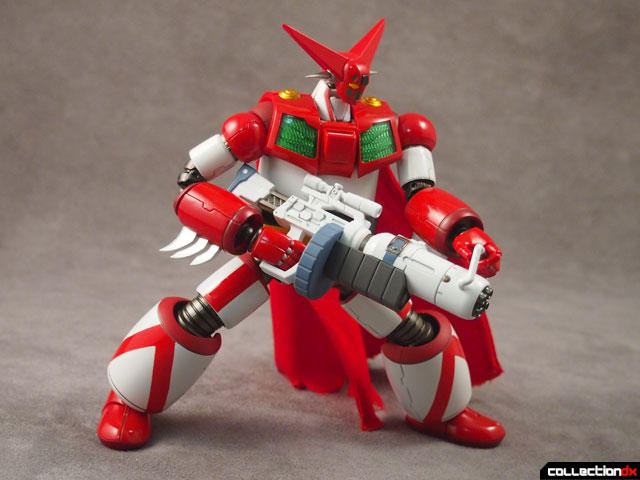 The Getter Tomahawks can be stored under a panel on the back of the figure. Like the Black Getter, it's a bit of a complicated system that involves separate clips and disassembly of the weapons. 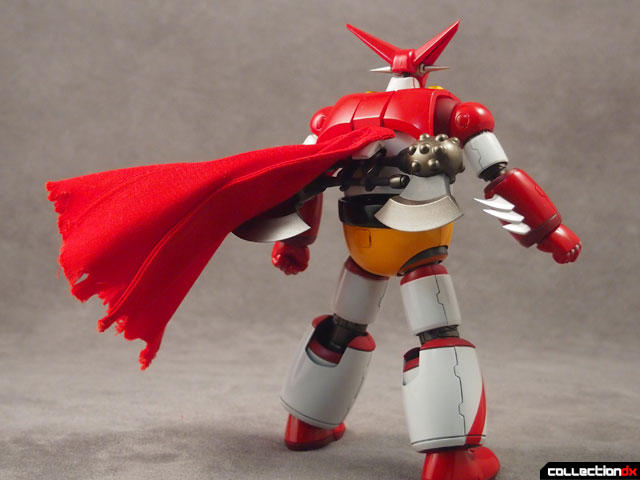 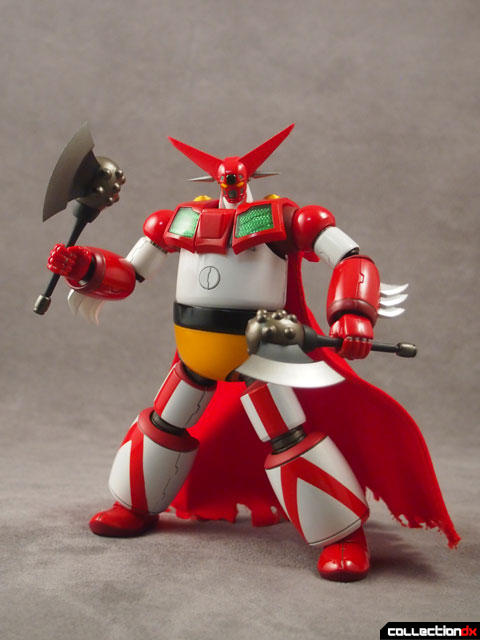 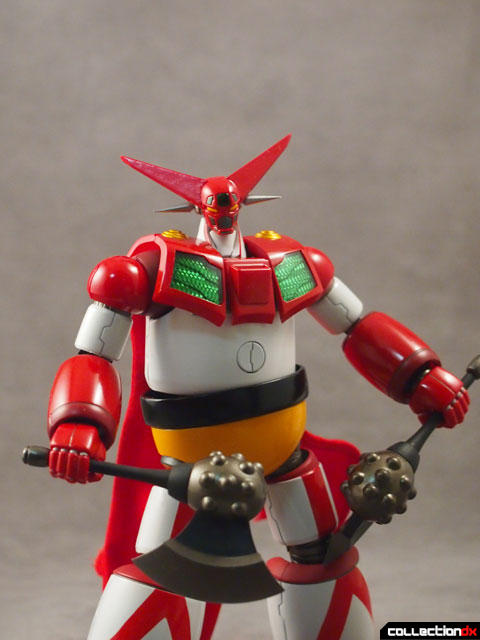 The stand that comes with the figure is rather nice. You get a square base with a translucent top and a moveable arm with pincers. I assume the clear top is to slide in images for the base. 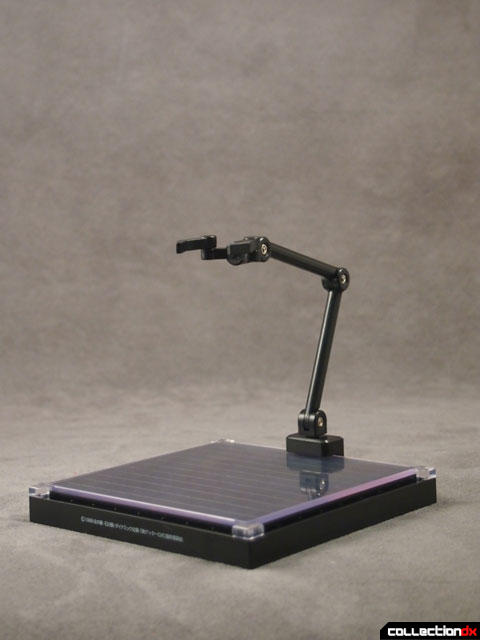 On the bottom is storage for extra parts for the stand, including another set of pincers and a clip to attach two stands together. It's nicely thought out. 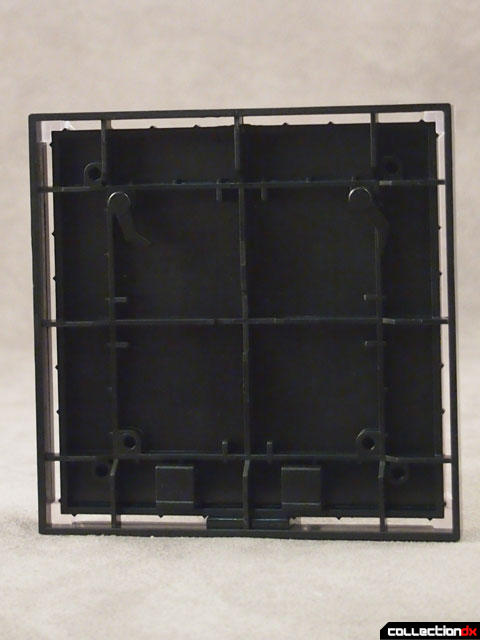 A unique adapter is provided to attach Getter 1 to the stand. You have to remove the yellow panel on the back of the waist to insert it. It can be a pain, but you basically have to tap the front to let it pop out the back. 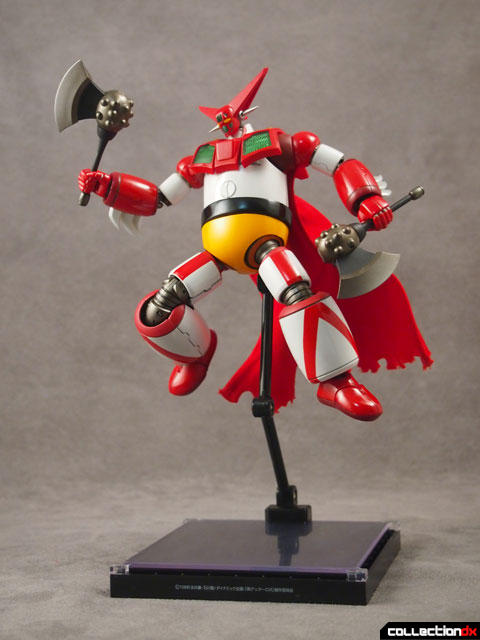 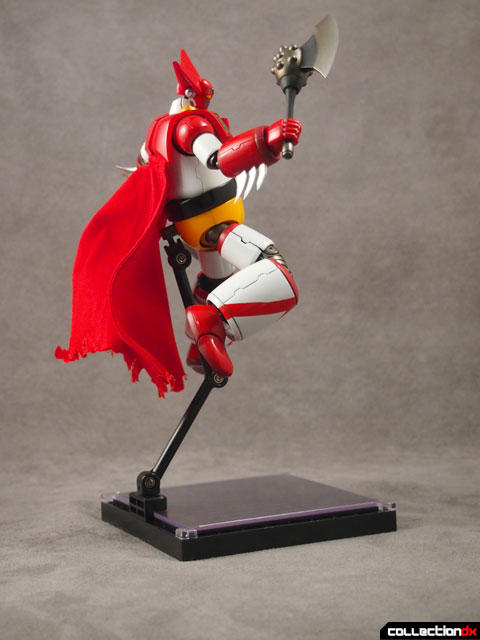 A variant faceplate is included, but i'm not sure it's purpose. Perhaps one is more anime accurate? The differences are subtle. 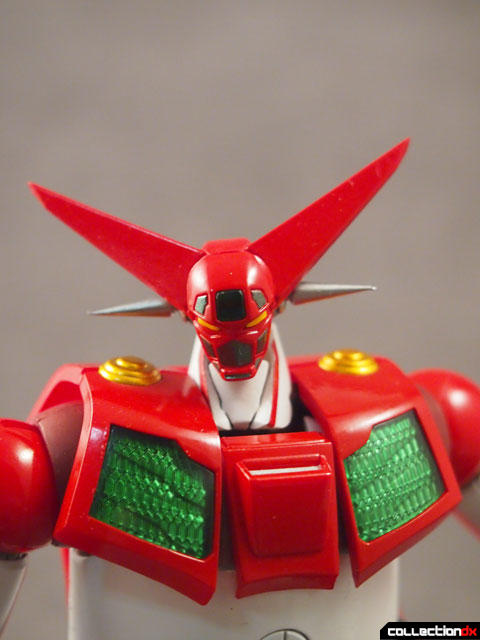 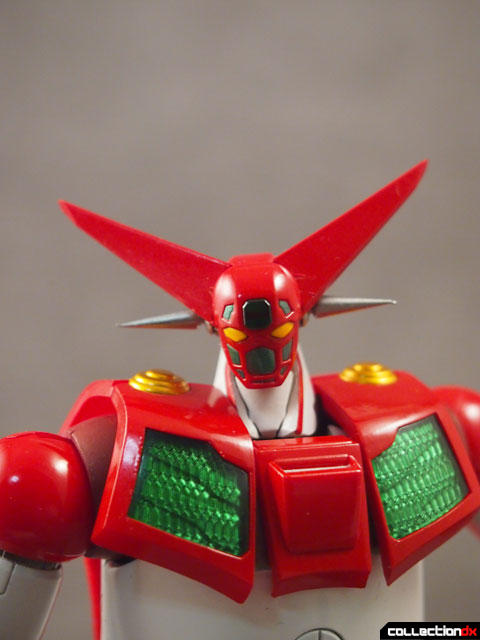 Overall, Getter 1 is a great figure and I think different enough to warrant purchase even if you already have Black Getter. Sentinel's partnership with T-REX has produced an outstanding, unique take on modern gokin.

Getter 1 arrives courtesy of Zwyer Industries and is available at www.animebooks.com and www.robot4less.com

As I said elsewhere, Getter Robo has been getting tubbier with every new toy. The Revoltech Renewal was pretty porky, but this guy is positively obese!

The Armageddon version of Getter 1 has always been fairly rotund. It's basically a bean with arms and legs.

I want this harder than anything I've ever seen in my life. This was my version of Getter Robo as a kid and I freaking loved him. The first Revoltech was alright but lacked the WOW factor that this guy does. Definitely on my immediate "I have too much money" list.

Well made. T Rex has done a great job with both of the Getters.