After the ToQGer are able to form the Cho ToQ-Oh, the Evil Army Shadow Line devises a plan to wear down the ToQGer’s new mecha combination. By sending wave after wave of cannon fodder train-bots, the Evil Army Shadow Line is able to put a lot of stress on the trains that for the Cho ToQ-Oh. So in order to keep fighting the Shadow Line’s gigantic monsters, the ToQ-Ger must find other Support Resshas in order to increase their arsenal. 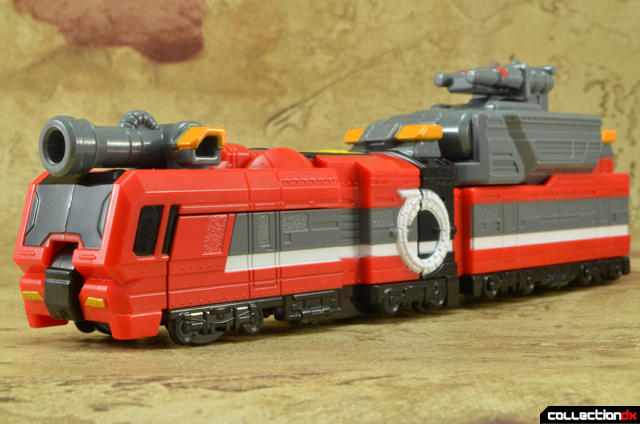 The Fire Ressha, which is at first erroneously referred to as the Extinguisher Ressha, is a firefighting and rescue train. Apparently this is a real thing. Railroad companies use fire trains to put out fires on and near the tracks, in tunnels and on bridges, as well as rescue passengers that are trapped in tunnels. In ToQGer, the team uses the train to put out fires caused by Loupe Shadow.

The train version of the Fire Ressha is a faithful rendition of this train. It also has some nice detail molded into the body. It is, however, missing the finer details such as panels lines and such.

At the rear, we have a hitch and a rectungular recess that is used as a connection point. 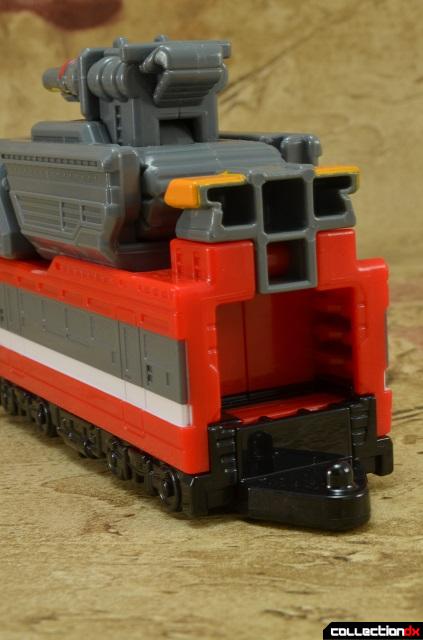 At this point in the line, most of the features of the train are the standard fare that fans have seen on the other trains.

The underside features wheels, hitches, a circular recess and also the raised plastic bits that the ToQ Changer reads.

You can separate the train in half and hitch the halves together and/or with other trains. 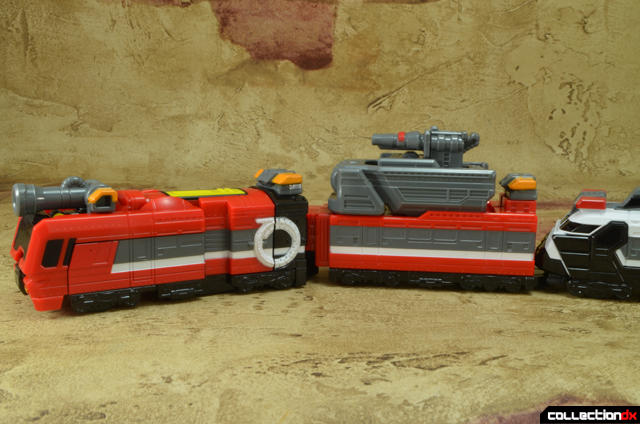 The Fire Ressha also features a water nozzle at the front of the train that can rotate up. 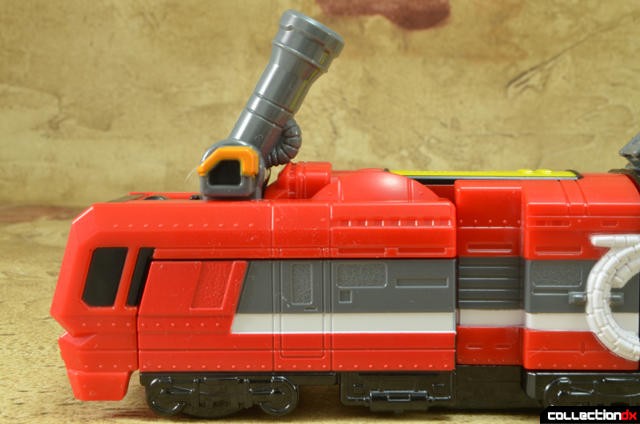 Then there is the structure at the rear of the trains which features a substantial amount of articulation: a rotating base, an extending body of the ladder-like structure and the end piece with the nozzles that can rotate and swivel. 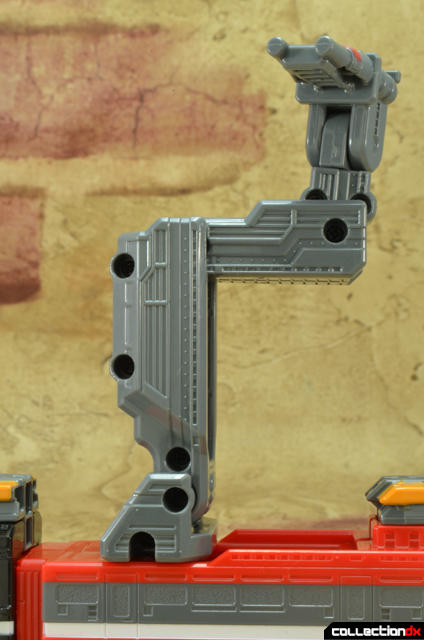 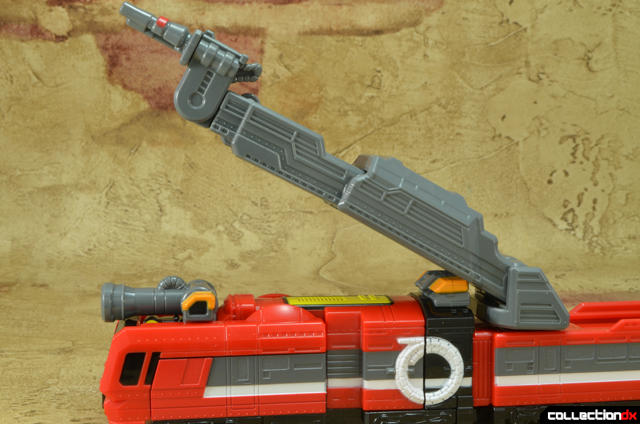 These are nice features of the toy that adds some play value to this train.

You can also use the front half to interact with the ToQGer to get some sounds unique to this train. To listen in on those sounds, hit up the video review. 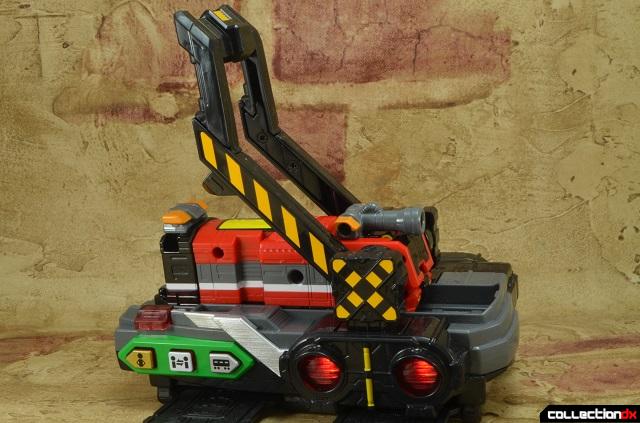 When the Fire Ressha combines with the Diesel-Oh, the combination is known as the Diesel-Oh Fire. The rear of the train replaces the lower right arm of the Diesel-Oh. 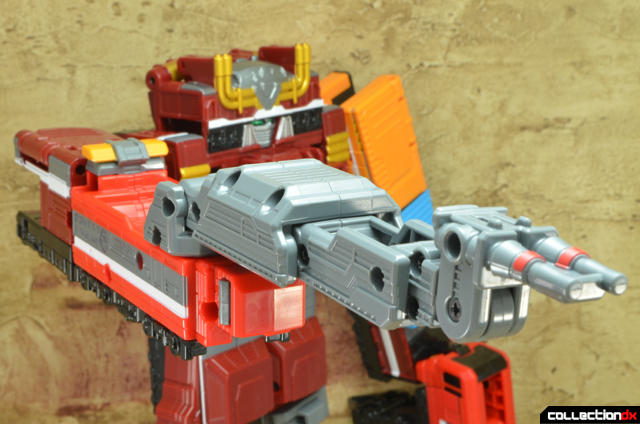 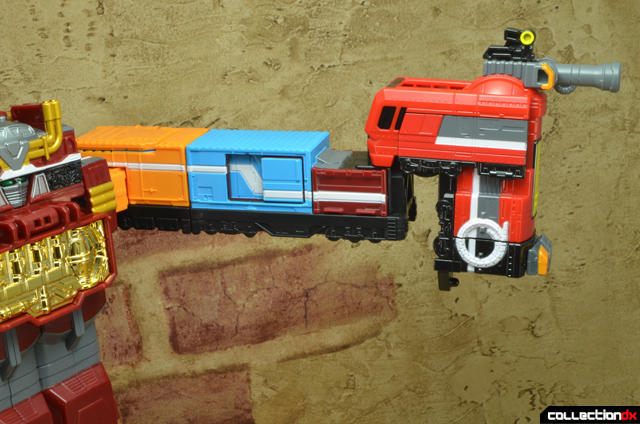 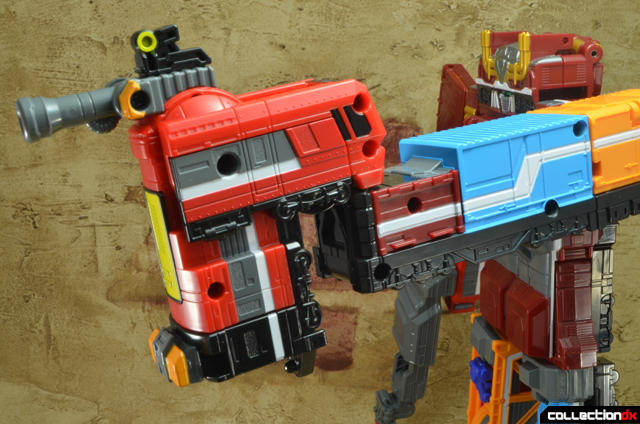 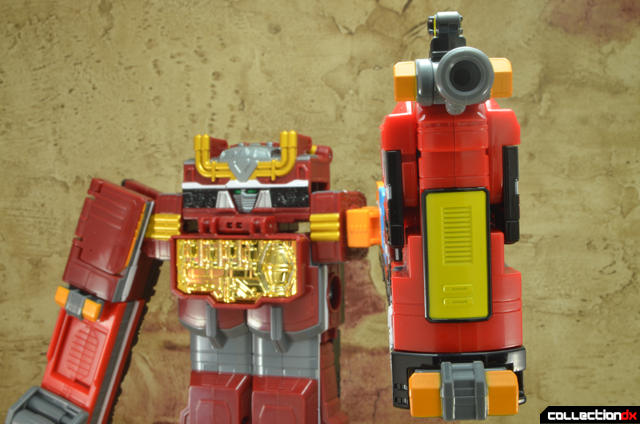 In the show, the Fire Ressha armaments give the Diesel-Oh the ability to shoot water out of the nozzles on the left and right parts of the Fire Ressha.  The Fire Ressha can also command the power of fire, as the left water nozzle also doubles as a flamethrower. 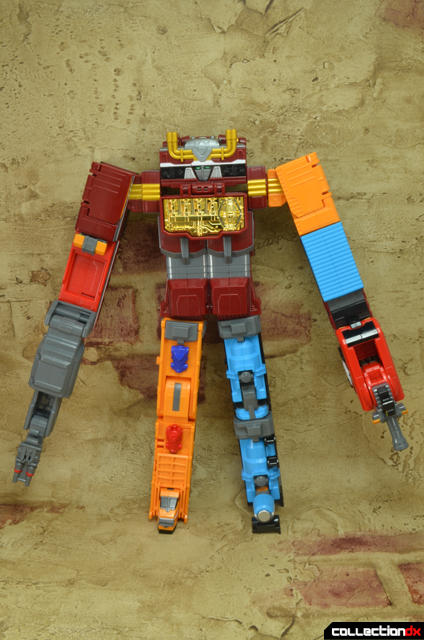 The right arm does not look much like an arm, but it does look like a functional weapon, so it gets points for adding some much-needed weaponry to the Diesel-Oh's arsenal.

The biggest flaw with this combination is how it looks when you raise both of the Diesel-Oh's arms. 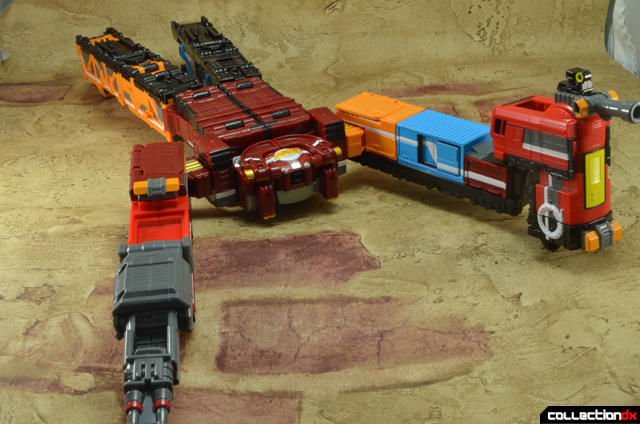 So the issue is that raising both arms with the Fire Ressha parts will make the Diesel-Oh way too front heavy and it will end up with a face full of floor. So when you display the Diesel-Oh Fire, you will have to pick one arm to be raised and the other to rest at the side of the Diesel-Oh.

So all in all, the Fire Ressha is a nice train, with some fun play features. It also serves as a decent attachment for the Diesel-Oh, if you can get over the fact that you can only display it shooting one weapon at a time.