One theme of the current Super Sentai series, Ressha Sentai ToQGer, is trains. So the suits and arsenal of the ToQGer are train themed and the mechas are trains that transform into robot parts.

Now we are moving on to the secondary mecha of the ToQGer, the Diesel-Oh. Each of the trains that make up the Diesel-Oh will get its own review because each piece can be purchased individually.

First up, let us take a look at the Car Carrier Ressha (Express).

The Car Carrier Ressha is a train with double-decker freight train for transporting autos. 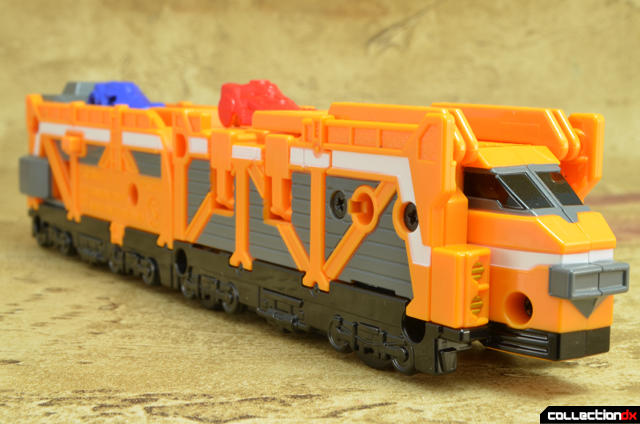 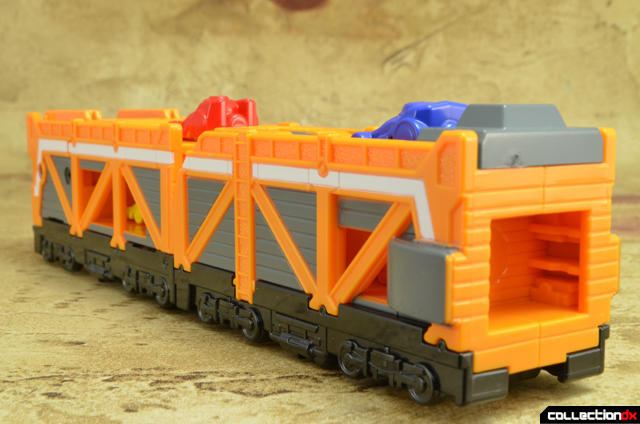 You can see two cars on top of the carrier. 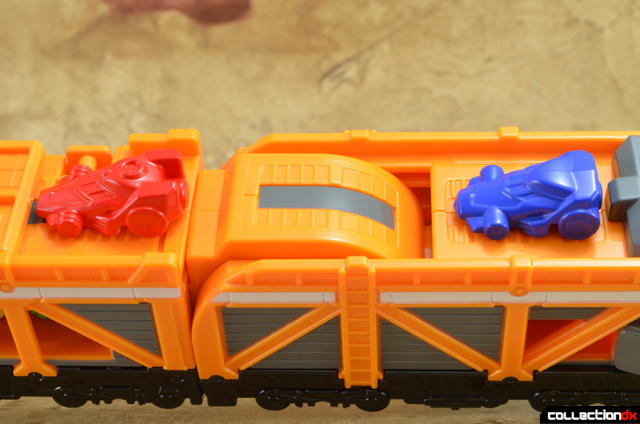 There are three cars within the body of the train. 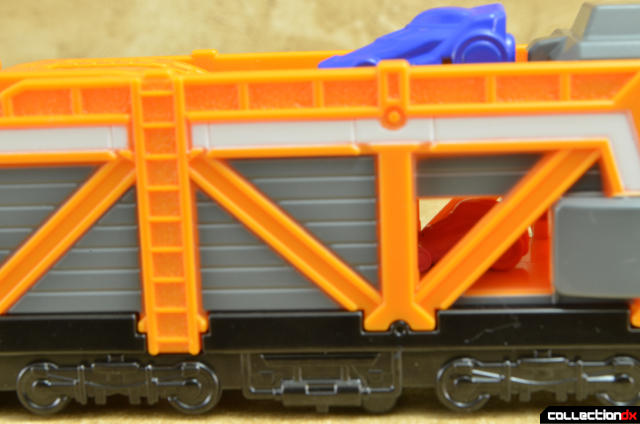 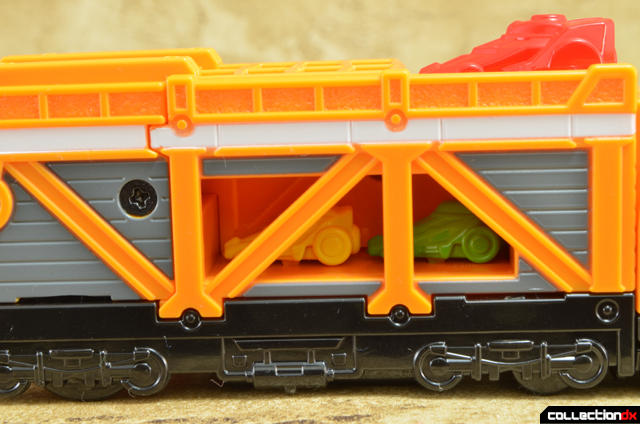 The DX version of the Car Carrier Ressha is a pretty faithful representation of what this train looks like in the show. The only major difference between the toy and the TV version of this train is the openings on the first level of the carrier. In the show these sections are closed up. On the toy, however, these panels are open so that we can see that the other three cars are stored within the carrier.

There are also a few minor differences with regard to the paint job on the toys. The trim at the top of the train, consisting of rectangles and other four-sided shapes, should be a darker shade of orange.

Also, the rectangle at the nose of the train should be filled in black. 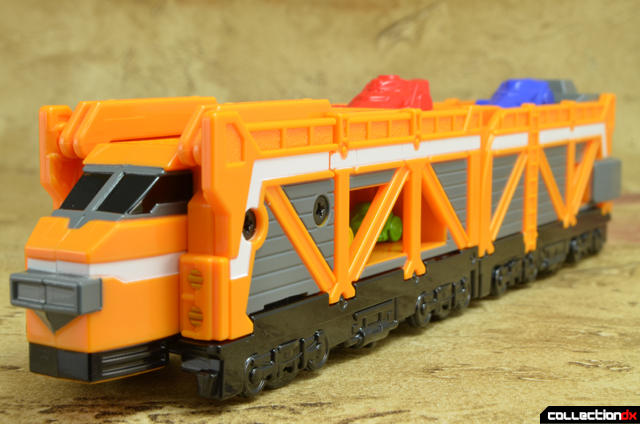 The Car Carrier Ressha has a lot of nice details for a toy train: from the wheels at the bottom to the cars it carries at the top. Sure the cars are very generic, but that is the way they look like in the show.

The underside has several wheels on it, to allow the train to roll around, and also a hidden hitch at the back. 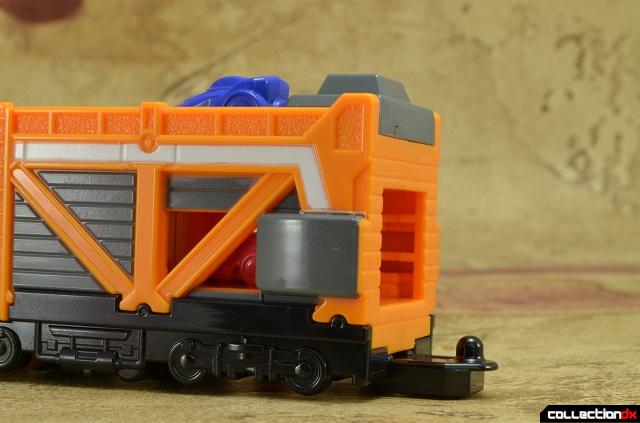 The hitches are used to attach trains together. 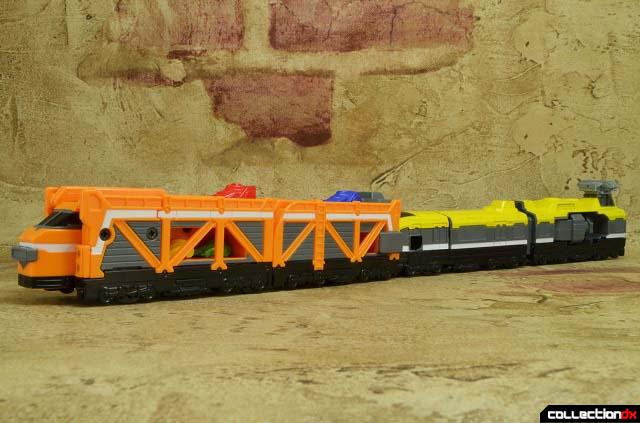 Here we can see the Yellow Ressha attached to the Car Carrier Ressha. Each of the trains has a circular hole on the underside of the front of the train. The circular hole connects with the hitch of another train.

You can even separate the halves of the Car Carrier Ressha and use them separately. Each half has its own hitch and hole. The piece with the hole for the rear piece extends out from the bottom of the train, just like the hitch. 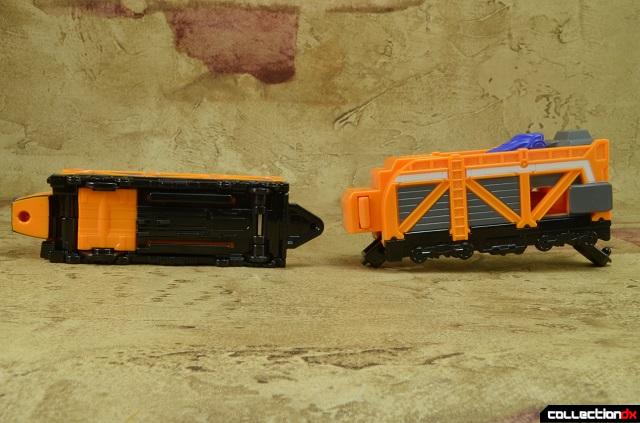 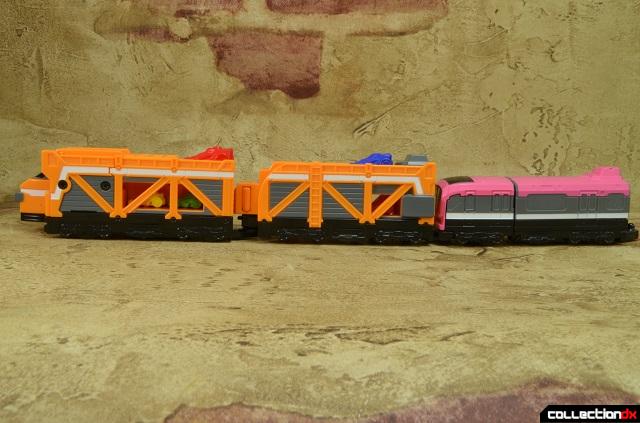 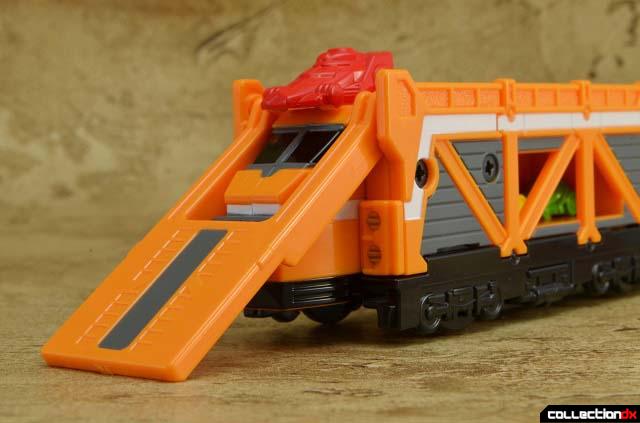 At the top of there is a ramp that can extend out and down.  When you bring the ramp down, the cab of the train fills in the hole of the ramp. You can detach the red car from the top of the train and slide it down the ramp, so it can race towards the enemy Shadow Kaijin. 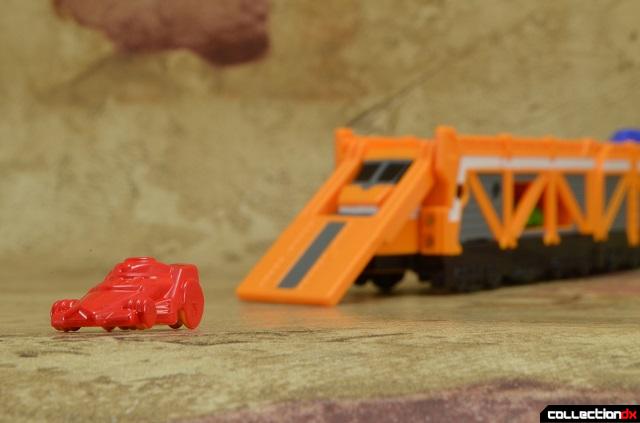 The other trains are stuck in place, so you will have to use your IMAGINAAATION if you want to experience those cars dashing down the ramp. 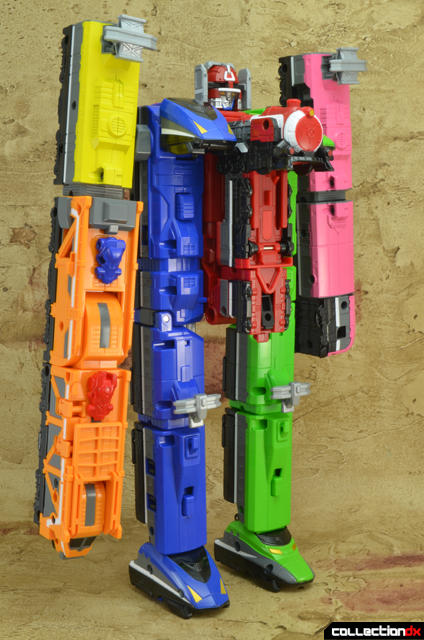 In this combination, the Car Carrier replaces the front part of the Yellow Ressha.  This effectively increases the reach of the right arm of the ToQ-OH. 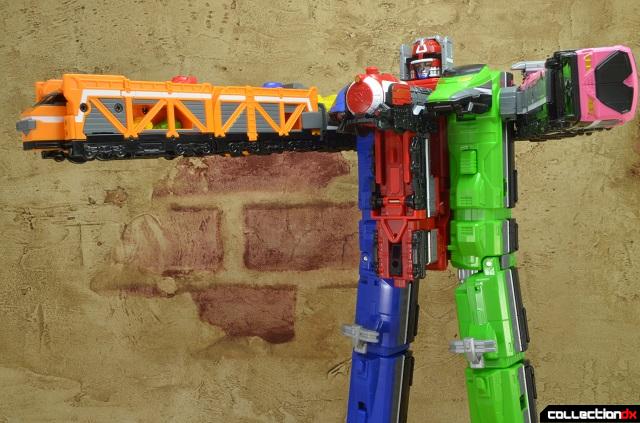 It was surprised to see the ToQ-Oh could extend the Car Carrier arm and not fall over due to its weight.

Since the toy does not have a true elbow joint, we get just a long block of train as the arm. You can press the switch at the side of the Car Carrier to fold the train up, in case you want an elbow on your ToQ-OH. 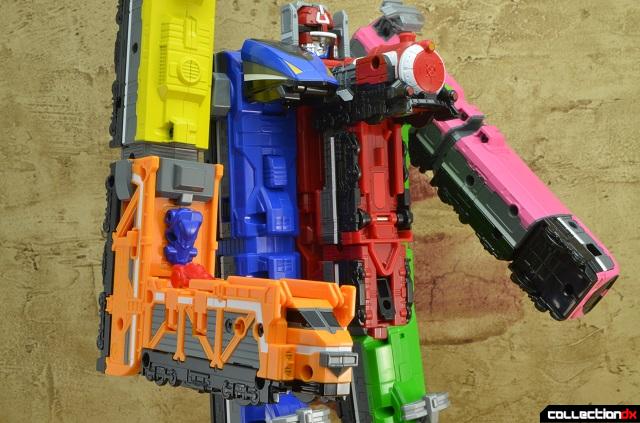 Since the ability to fold up the Car Carrier does not come into play in this combination,  doing this will make the arm look weird and is also not accurate to the ToQ-Oh Car Carrier of the show, which has be elbow between the Yellow Ressha and the Car Carrier Ressha.

I am not a big fan of this combination because the Car Carrier arm is a just a big hunk of train acting as a right arm. There is no fist or anything to make this look any different than it does in train mode. 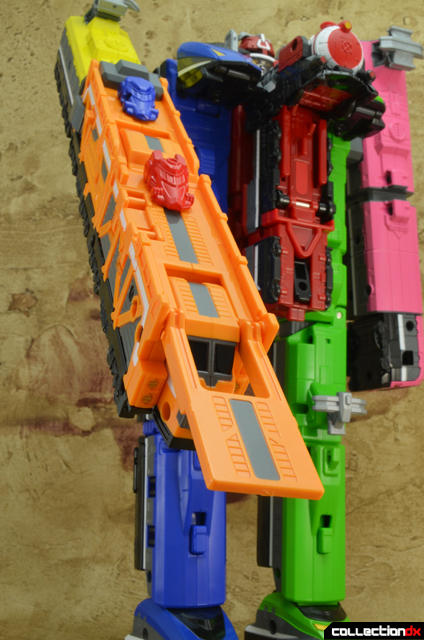 In the show, the ToQ-OH can also launch the vehicles to perform the Car Carrier Dash Finishing attack. Like I mentioned earlier, the only car you can slide down the toy version of the Car Carrier Ressha is the red car. So its IMAGINATION time once more!

I really wish they had figured out some better gimmicks for the auxiliary mechas. I get that one of the themes of this year’s Super Sentai is imagination and that kids are supposed to imagine the toys doing what they do in the show. However a car launching gimmick would have been sweet!

The Car Carrier Ressha can also interact with the ToQ changer to make a few different sounds. Check out my short video review to listen in on what those sounds are. 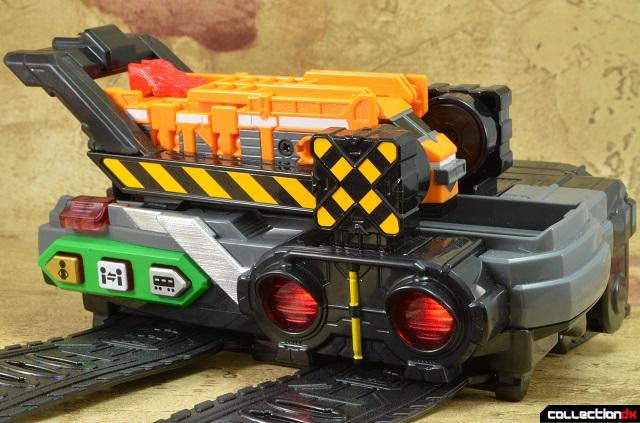 All in all, the Car Carrier Ressha is a train that is functional and fairly good looking in its vehicle form. As an arm for the ToQ-Oh, however, it is a bit underwhelming. This is not the kind of mecha I would pick up as a standalone attachment for the ToQ-Oh. However, the Car Carrier Ressha is a crucial component for the Diesel-Oh and thus it is a must have for those who want to form the ToQGers secondary mecha.

i love toqger :) very fun series, and the dx mecha are nice and compact.