As Ressha Sentai ToQger continues, so does the number of trains being released in the DX Ressha Gattai series. The Build Ressha is ToQ Rokugo's (number 6’s) personal train. It is predominantly orange to match ToQ Rokugo's color scheme. While orange is a quirky color for a member of a Sentai team, the color is quite appropriate. The orange is similar to the orange used on construction workers' safety vests. That makes even more sense considering that ToQ Rokugo’s job is a railway repair worker.
The Build Ressha is a construction and repair train composed of two separate trains which can be stacked to form a double-decker train. 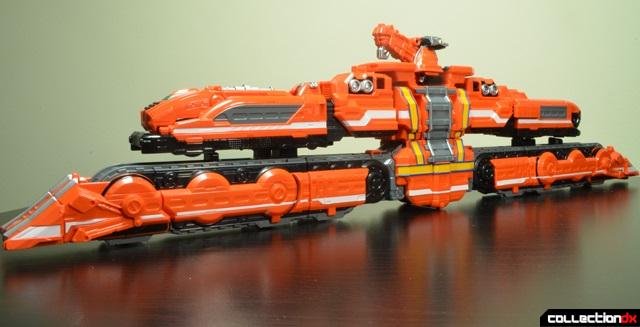 My big peeve about this form is the big gap between the trains. It is not present in the show, but sure is noticeable on the toy.

The train that rests at the top has a couple of play features. The crane in the middle can rotate. 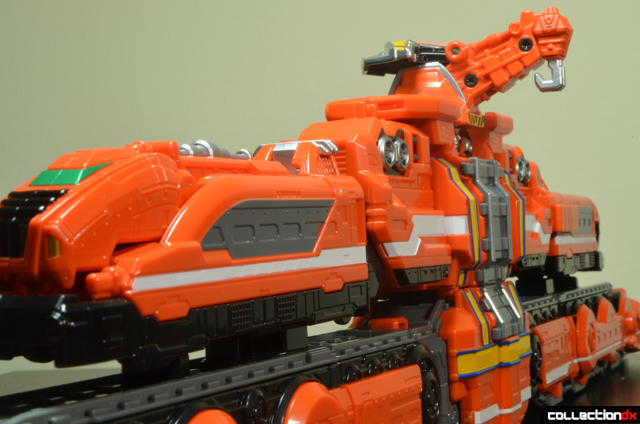 The only downside to this is that when the crane is facing the left side of the train, you can clearly see the face of the train's robot form. 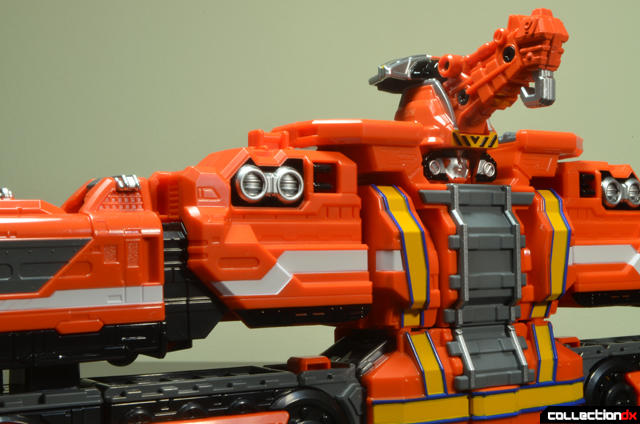 The other play feature of the top train is the railroad shovel that extends in front of the train. 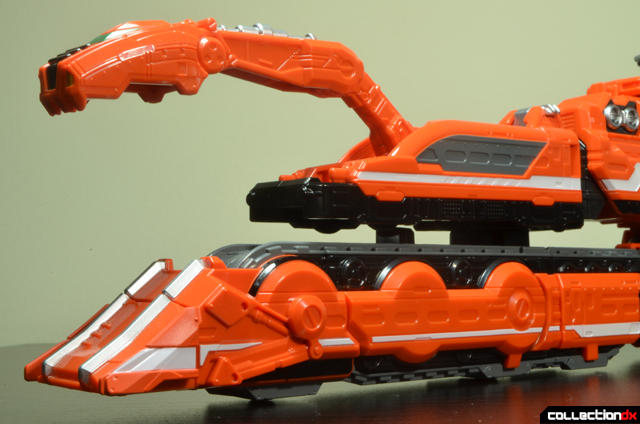 As for the other train, it has ramp-like ploughs on each end of the train and tracks at the top.

This train is pretty straightforward and lacks any play features.

Like the other trains in the line, the Build Ressha has hitches and holes on the underside so that you can link its parts and to other trains.

The lower train has train tracks on the bottom and top of the train. In the show, these tracks are on moving treads.

That is not the case with the toy, which is a shame because that would have been a very cool feature.

Also like the other trains in the line, you can insert the Build Ressha into the ToQ Changer to have the device play sounds specific to the Build Ressha. For the sounds, check out my video review. 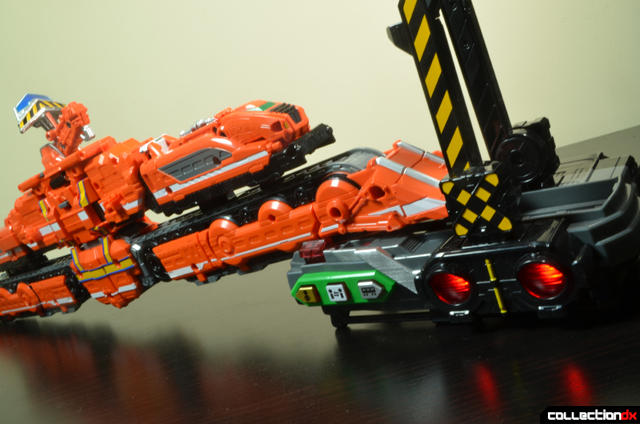 Of course, you don't insert the whole train into the changer. You just detach the front part of the top train and insert that into the ToQ Changer. 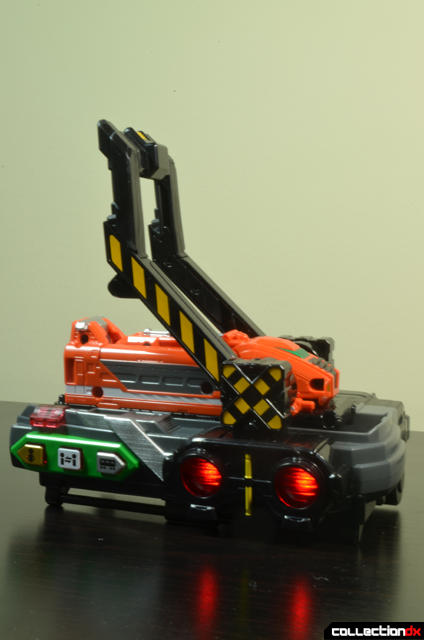 Besides all the previously mentioned features of the Build Ressha, it can also transform into a standalone mecha, the Build DaiOh.

Transformation for this is super simple. 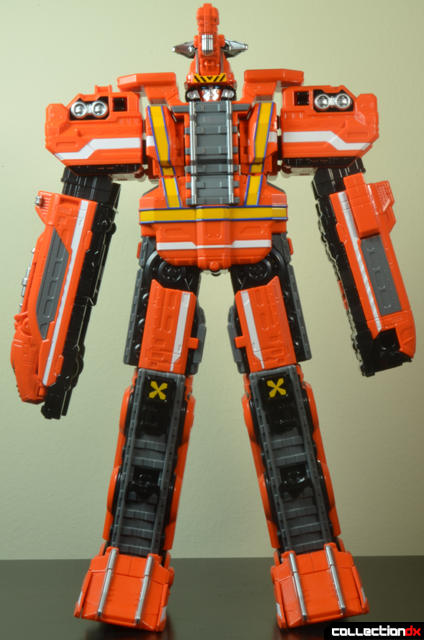 The robot has an industrial construction robot look to keep in line with the Build Ressha's theme.

Now that the center part of the trains have formed the torso of the BuildDaiOh, we can see that the robot is sporting a safety vest, complete with the yellow straps.

It also appears that the Build DaiOh is wearing a hard hat to ensure it didn't hurt its noggin' during battle.
Interestingly, the crane on the head looks a bit like a beetle's horn. 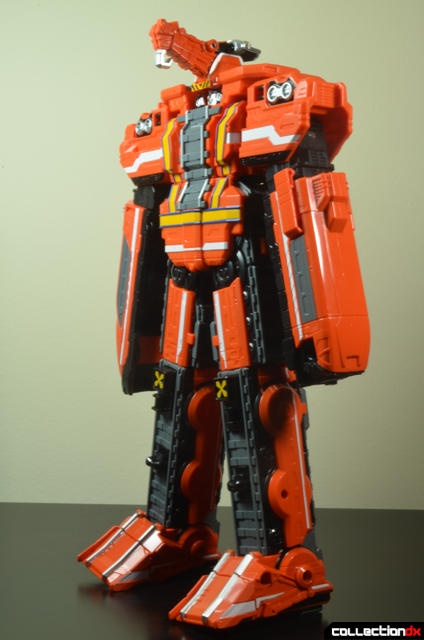 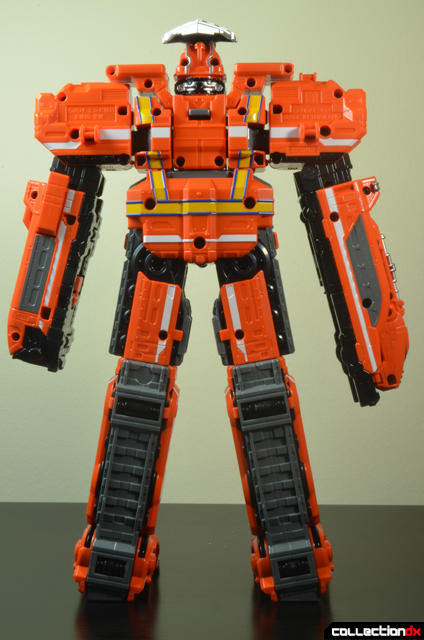 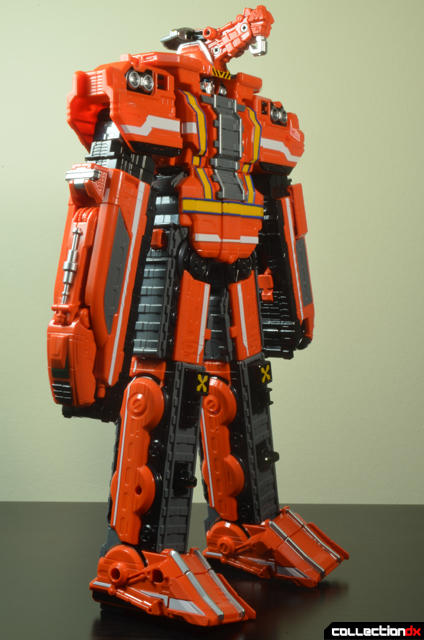 Since the Build Dai Oh is a standalone mecha, unlike the Diesel Oh and the ToQ Oh, it has a single color scheme to all its components. This makes the robot's design a bit more unified.

The design of the robot is quite simple and so are the play features of the toy. The shovel on the right arm acts as a weapon. 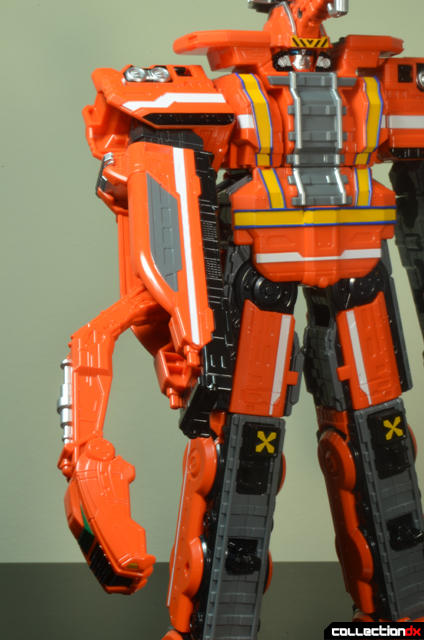 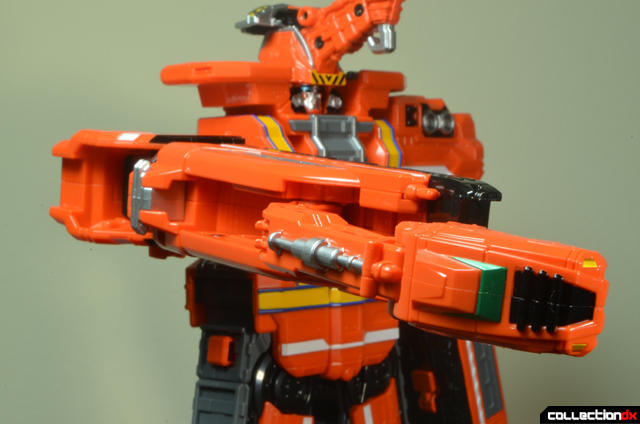 You can also attach the Drill Ressha to left arm, since it is ToQ Rokugo's other train.

But the Drill Ressha toy comes with ToQ Rokugo's weapon, which is why I don't own it.

So I ghetto-rigged me a drill ressha. 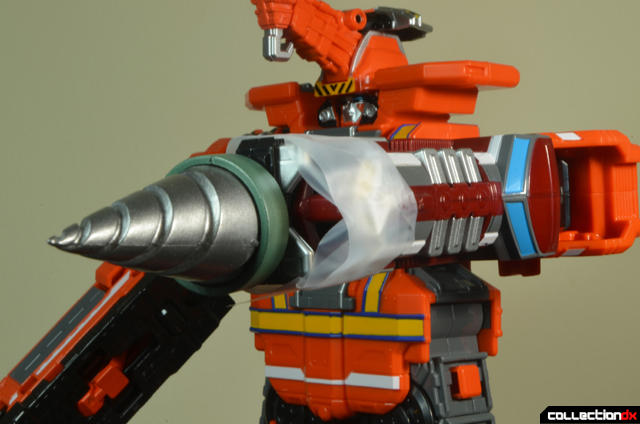 You can also remove part of the other arm so that you can attach other trains to it.

Here we have the Build DaiOh Tank. 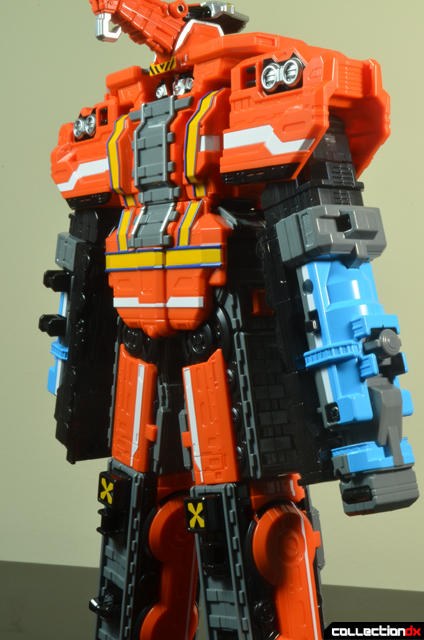 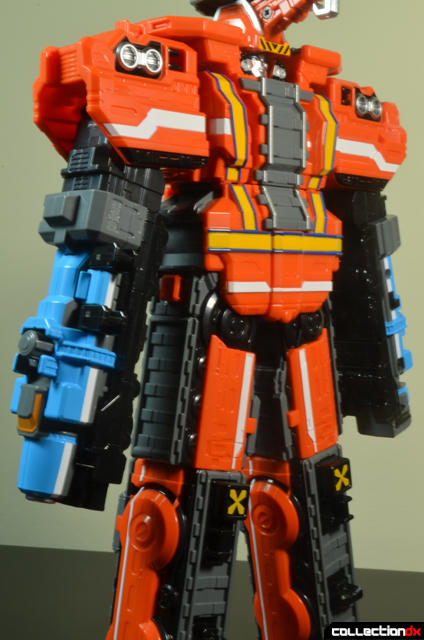 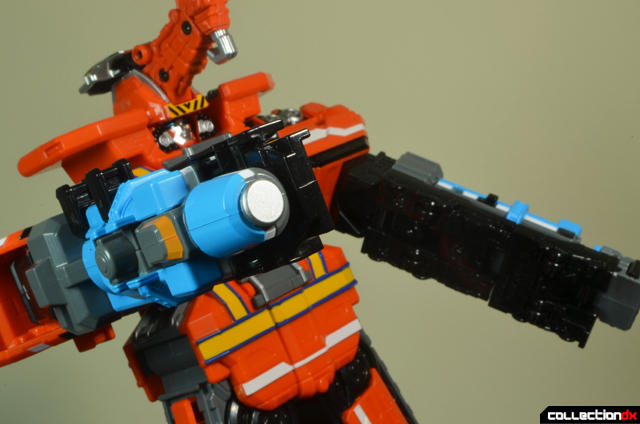 Articulation for this robot is very limited. You can rotate the shoulders and move the arms up. That is all. 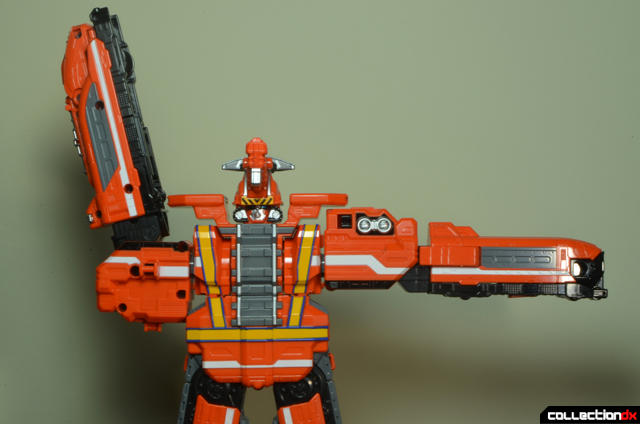 Besides being able to form its own robot, the Build Ressha can also answer the question, "How do you take the already grotesque looking abomination known as the Chou ToQ Oh and make it look worse?" 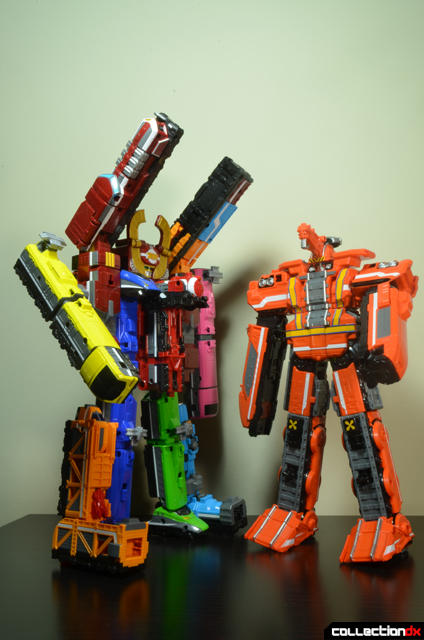 First, you take apart the Build DaiOh into a couple of parts. 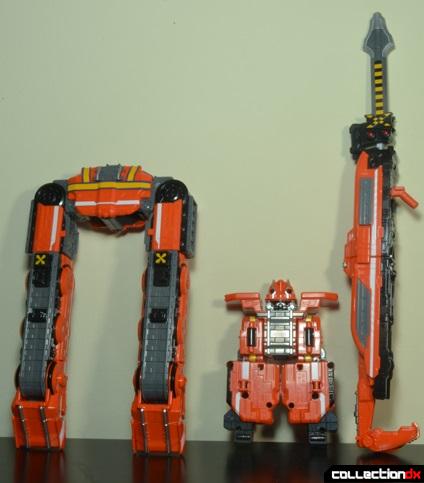 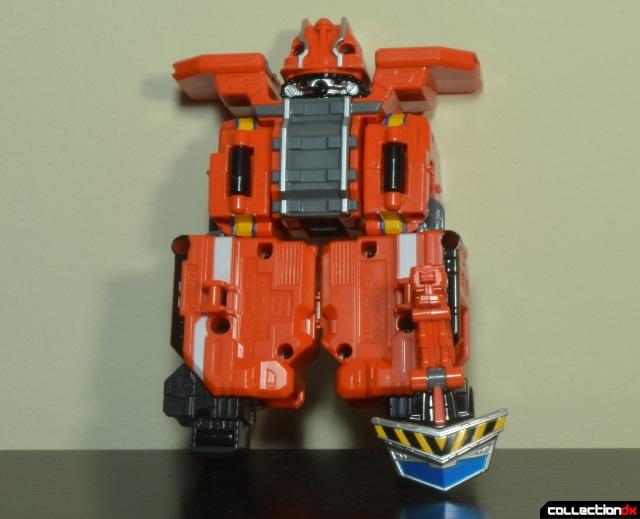 Then you slap them on the Chou ToQ Oh. 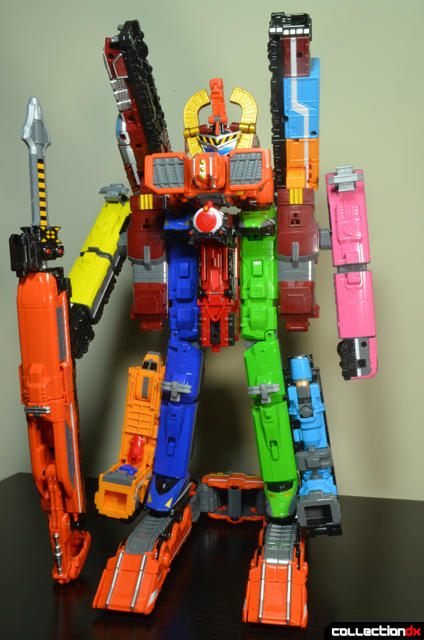 I present to you the Chou Chou ToQ Dai Oh. 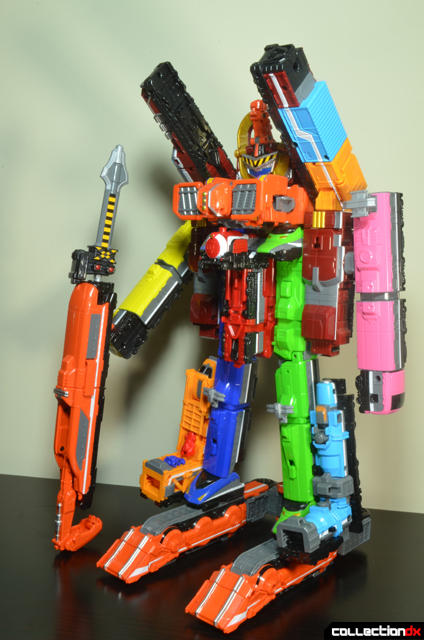 Once attached to the Chou ToQ Oh, the parts of the Build Ressha become a platform, a neck extender, a visor and staff for the Chou Chou Toq Dai Oh. 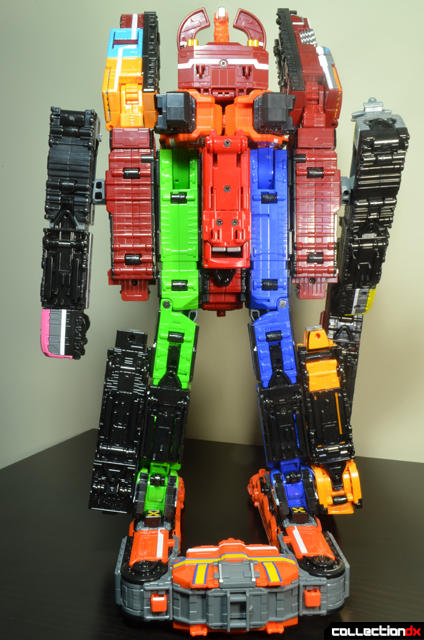 The toy version of the Chou Chou ToQ Dai Oh is a bit inaccurate to how the robot looks like in the show. It is a lot wider, the proportions are off and the platform underneath the robot should be two pieces, with the back part completely absent.

Also, the Tank and Car Carrier Ressha should be separated in two pieces. But they are clearly not. 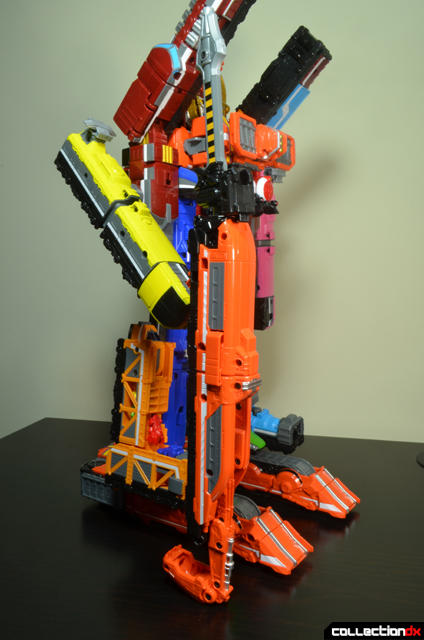 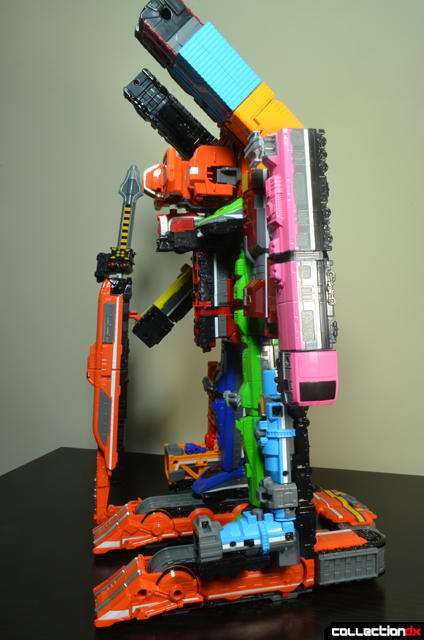 So the huge mash of train-bot known as the Chou ToQ Oh just adds some orange to its color pallet and a lance to its arsenal when it upgrades to the Chou Chou ToQ Dai Oh.

One thing I like about his combination is the sweet new visor. 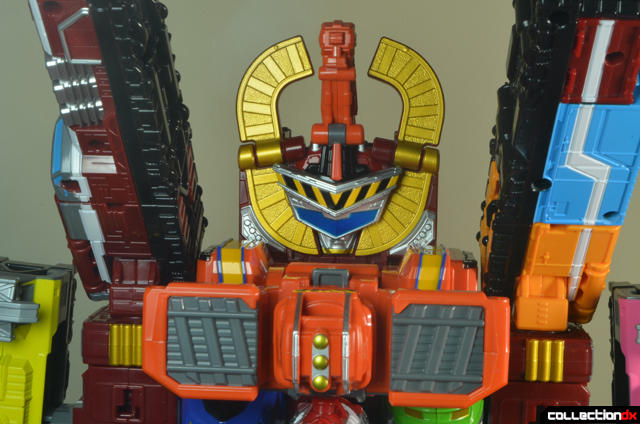 The only other thing I like is the lance looks like a jackhammer if you flip it around. 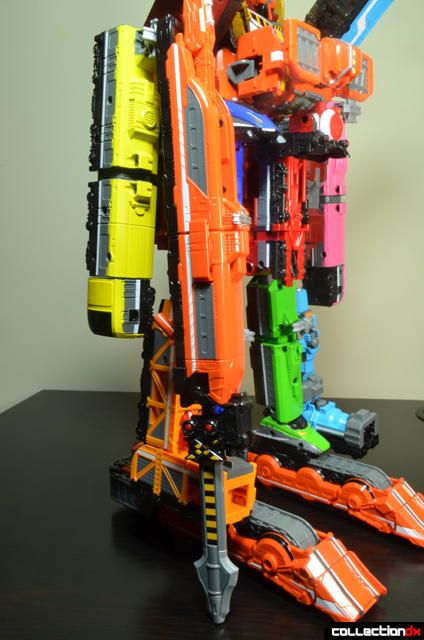 When I saw the reveal for this train, I loved the look of the train mode and the Build Dai Oh. As for the Chou Chou ToQ Oh, I didn't care for it then and I don't care for it now. The sum of all these trains is not greater than the individual parts. Luckily, the Chou Chou ToQ Oh appears to be the last combination that uses the main mechs in this manner. So at least the Clustef@*k of trains has arrived at its final destination. 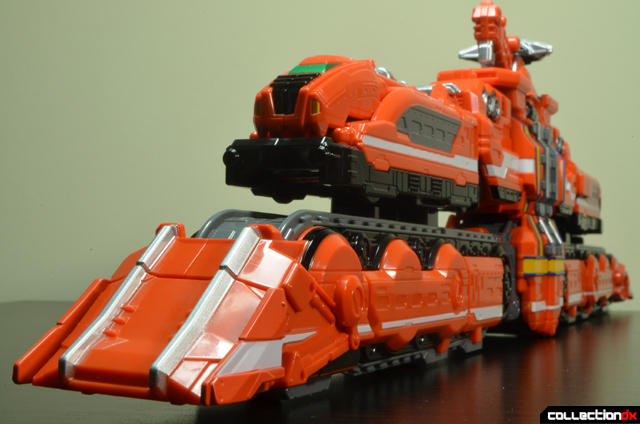 ... the clusterf@ck isn't over just yet.

Catalog scans have revealed that there's ANOTHER combination, the "Ultrazord" of this series, which somehow manages to be even more hideous than the Chou Chou. Behold the ToQ Rainbow:

WARNING: Not for the faint of heart or easily-nauseated

I can only hope that the laziness and/or ugliness of all of this year's Sentai designs is an indicator that they're trying to save up the budget for something awesome for the 40th anniversary series in 2016. Or else maybe the people at Toei and PLEX got really, really drunk and decided to take it easy for a year to nurse their hangovers, I dunno.

I don't know if I would consider this combination a clusterf@ck, since it only uses the front part of the trains.

As for the direction that Super Sentai is going in, I have a feeling that they will continue to make simple and easy to transform toys, even if they don't look that good. After all, it is all about appealing the widest audience and its seems that they are trying to get the toys into the hands of the youngest demographic possible.

Fair play for your enthusiasm and love for this power rangers line, I love the passion you guys have however, I don't know where it comes from as the toys are hideous and I'm not just talking about this one; they're basic, blocky, no articulation, blatantly aimed at kids etc etc etc.
If bandai actually made an effort and thought out the design more, they'd make nice counterpoints to the SOC like, as it's stands, I just don't think they care as much.

My enthusiasm for the toys comes from my love of the show. I also try to look at the line from the point of view of the target audience, so that keeps me from ranting and raving about the simplicity and aesthetics of the line.

I too yearn for the years where Super Sentai toys were more intricate and better looking. But I am not the target audience for these toys and I have made my peace with that.

It's the clusterf@ck to end all clusterf@cks. I thought the "ultrazord" of Boukenger was bad. No, I was wrong.

Yea. It is pretty bad. As much as I disliked the Ultimate Dai Bouken, I would take that over the Chou Chou ToQ Dai oh in a heartbeat.

I don't own any of the Ressha's, but I have had an opportunity to handle them. They are a little bewildering to behold, however, the quality is there IMO. I have no affinity for the show (Super Sentai in general), but I LOVE the toys. I feel that Senpuujin and Gouraijin were the last of the great Super Sentai mecha...sigh

Do you have any feelings on the Abaranger mecha, the Dekaranger Robo, or Wolkaiser from Magiranger? Design-wise, I think Gekiranger was the last series with decent mecha that didn't play to small children(Like with the Go-onger Engines) or become just vehicles for that series' new gimmick.

I have actually never seen any of them in person unfortunately. I don't recall even seeing the american versions either. Magiking and the other DX mecha from Magiranger look awesome. It's hard to play catch-up when the secondary market goes berzerko price wise.

Wolkaiser was never released in the States, only the UK and Japan. I think Bandai America didn't think a villain mecha would sell. The Abaranger/Dino Thunder mecha are awesome. But again, the US didn't get the full assortment. I think two of the auxiliary mecha were not released here, along with AbareBlack's zord. And, for some reason, we didn't get Bakurenoh either, not really. Instead it was repainted in a 'Murican red, white, and blue scheme, with a useless repainted green Pterazord included.

Ctrl+F trainwreck, zero results ;_;. All joking aside, I always have a weird attraction to the most cluster-y mech combos in sentai, and this does not disappoint! Two out of three modes ain't bad, considering the design limitations of essentially building robots out of rectangles.