Another Transformers movie, another new set of Transformers characters and toys. While some of the movie verse characters tend to come off as annoying at times, Drift is a little more thought out. His bio suggests he once served the Decepticons but then reverted to the Autobots (much like Jetfire’s character). It might also be worth noting that (slight movie spoiler) Drift is represented in the movie as a triple changer and the movie verse’s very first one at that. Sadly, he’s not represented as such in toy form, but then again neither was Springer for the longest time. However, Hasbro has reportedly announced a voyager version of Drift that transforms into a helicopter that also happens to be a remold of Dark of the Moon Skyhammer. 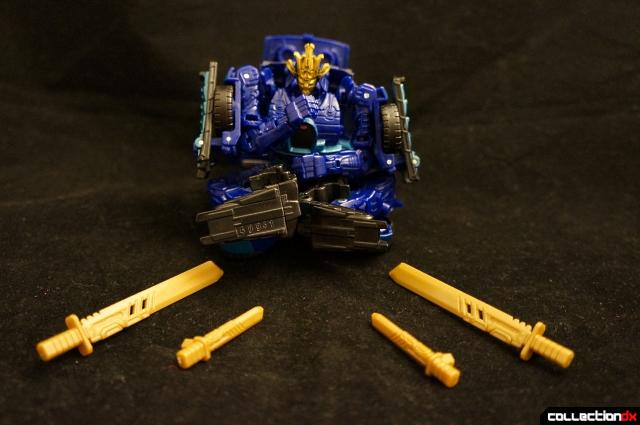 Drift comes with a total of four accessories. Two small swords and two large ones. While all the weapons can be stored nicely in both modes, a part of me wishes this autobot had four hands so he could hold all his weapons at once (Star Wars General Grievous style). 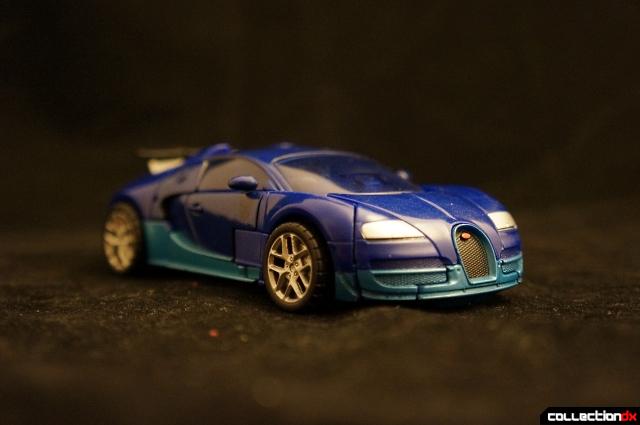 The samurai Autobot chooses a very attractive looking alt mode. The car mold is based off a Bugatti with an attractive dark blue and teal color scheme. While I’m not the most well versed car enthusiast, I know a car that cost more than my neighborhood block when I see one. 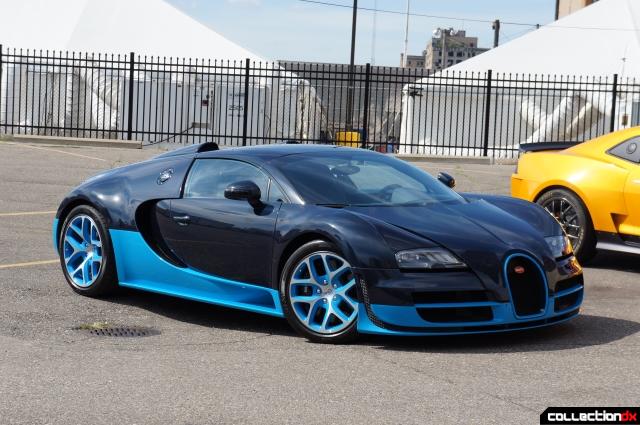 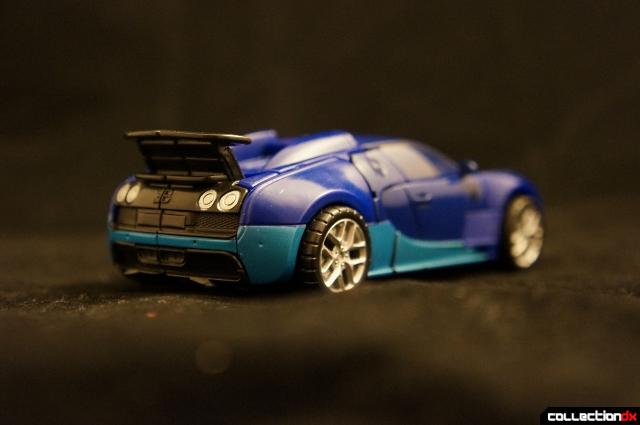 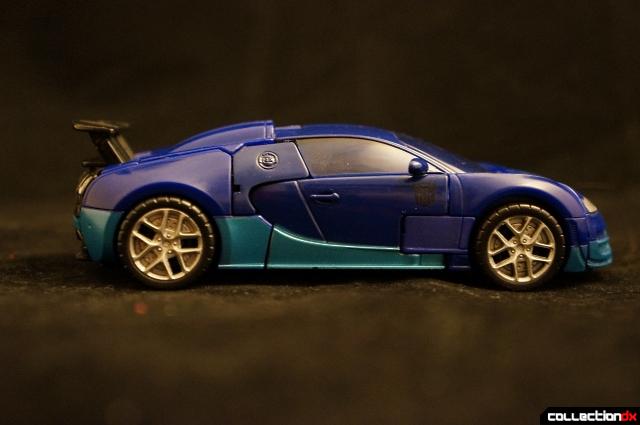 Once again, referencing one of my photos from the set of the movie while it was being filmed, this alt mood looks very much on par with it’s on screen counter part, right down to the Bugatti logos on the front, back, and even one molded on the robot mode’s torso area, added is a single printed Autobot logo on the right side of the car. 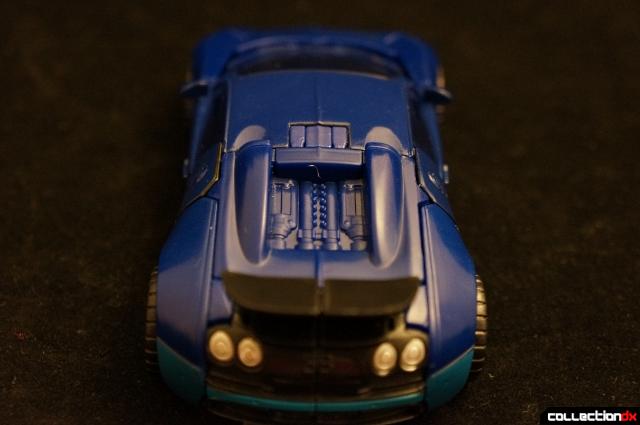 Some appreciated details on the mold include the attention to the engine on the backside of the
car. 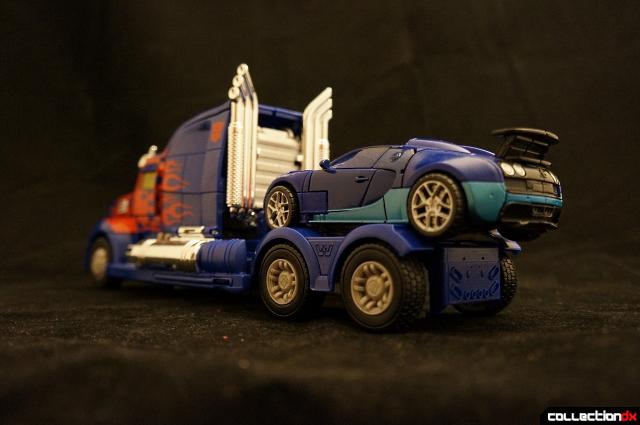 “Anyone order a Bugatti off ebay?” 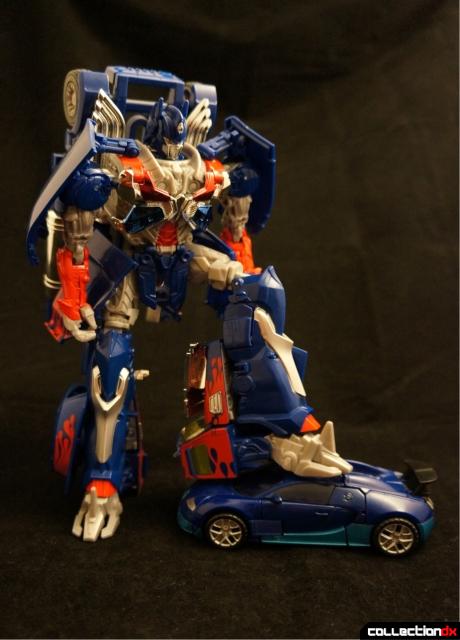 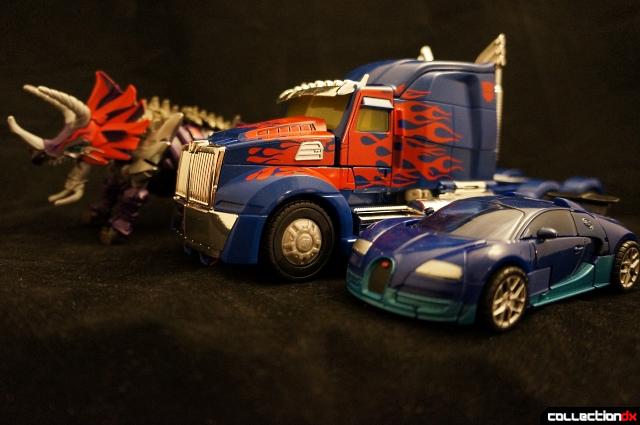 Drift does scale nicely next to AOE leader class Optimus and other deluxe figures like Slug. 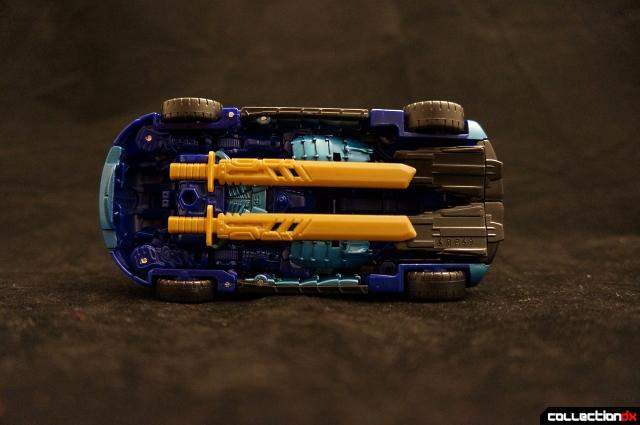 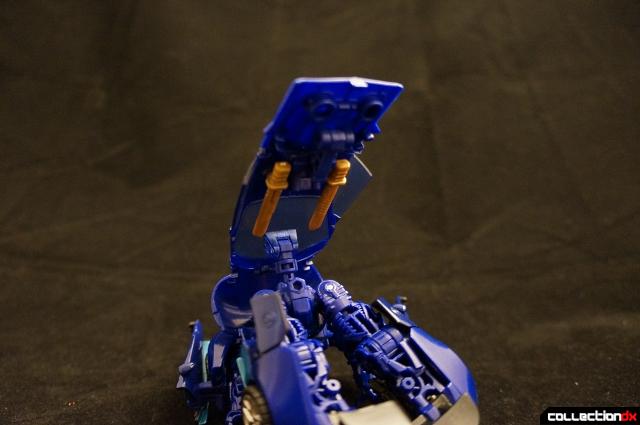 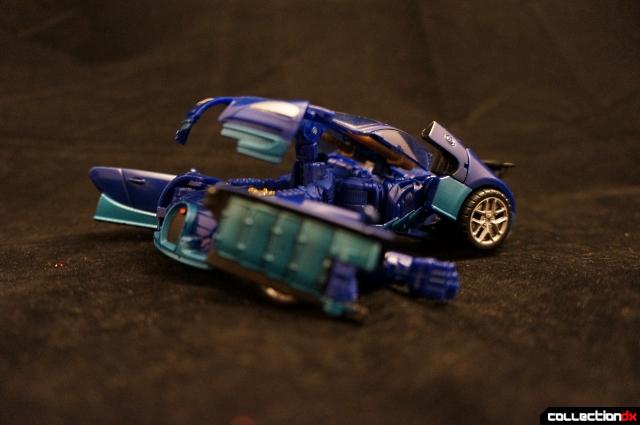 The transformation is very simplistic. Hasbro was kind enough to include instructions on both transformations from robot mode to alt mode and vise versa (unlike the Leader class Optimus I reviewed and others in that line). 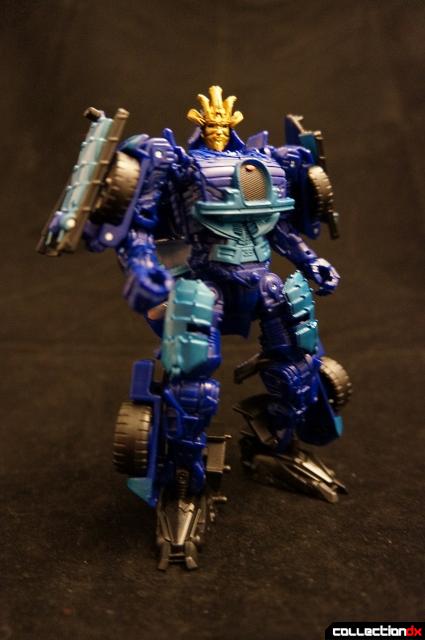 Once transformed, the robot mode gives a heavy samurai feel to it, somewhat similar to the theme of Optimus’ new armor. However, Drift completes the look with his shoulder and leg pads as well as the samurai face mask. While looking at this guy, I can’t help but think about Marvel’s the Silver Samurai. 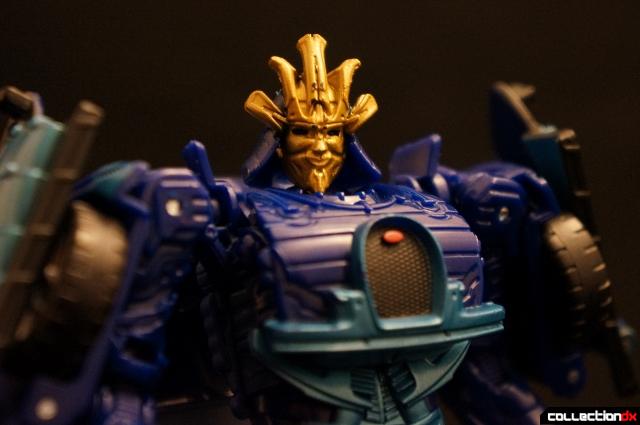 Both sets of swords can be stored on Drift’s back in several ways. There are ports on the outer section of the back as well as the inner section, the other outer one stands out by having pegs that allow the larger swords to peg into the holes that are on the blades. 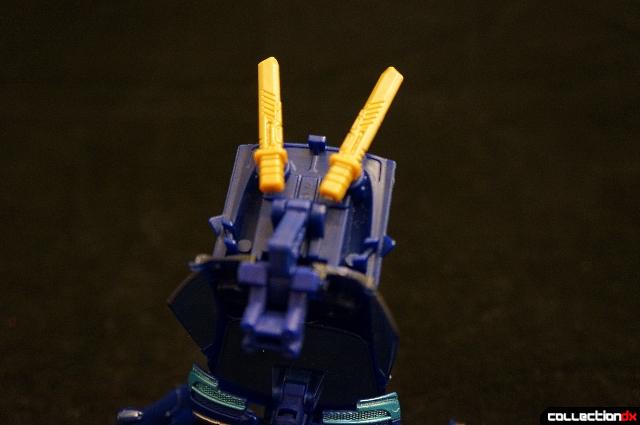 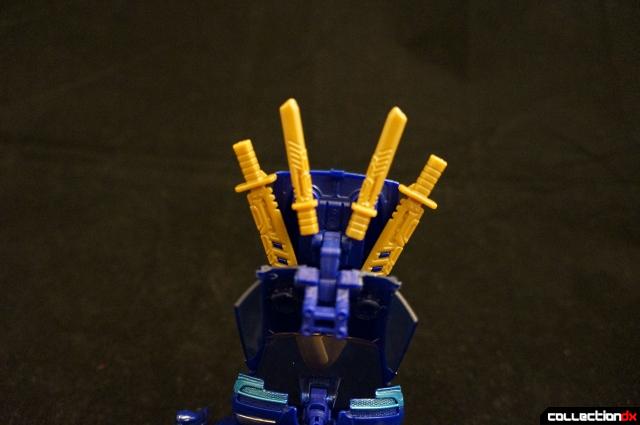 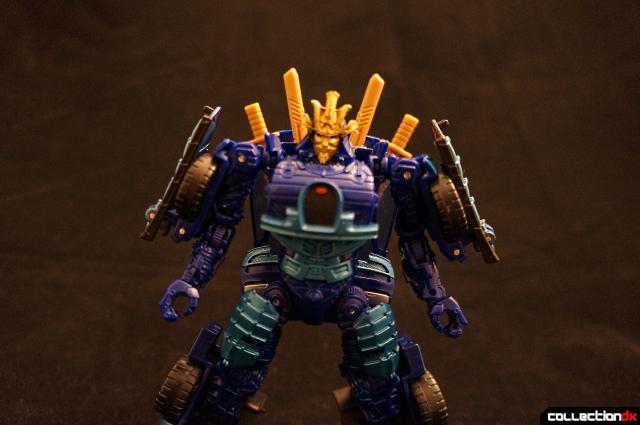 The overall storage of all the weapons together creates a fantastic look for the figure. 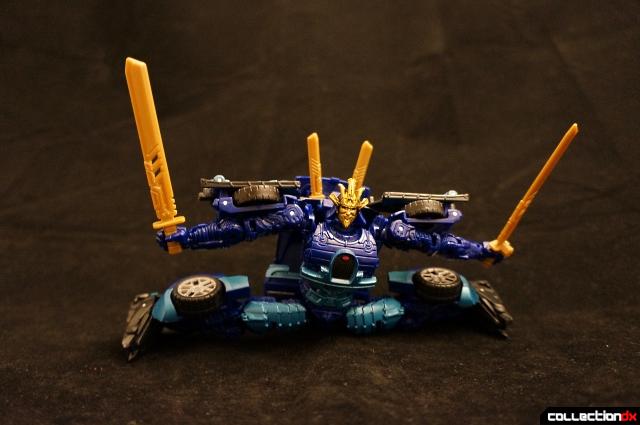 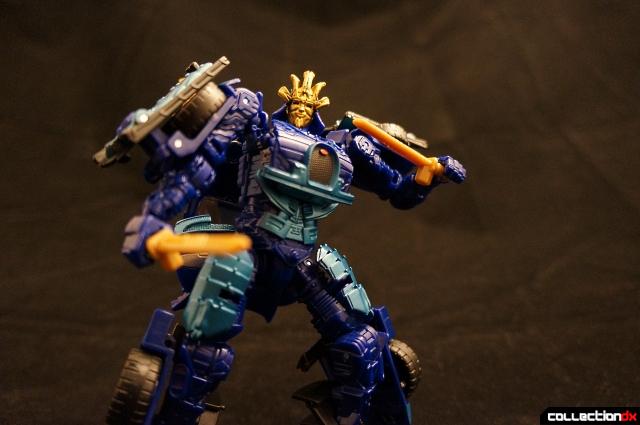 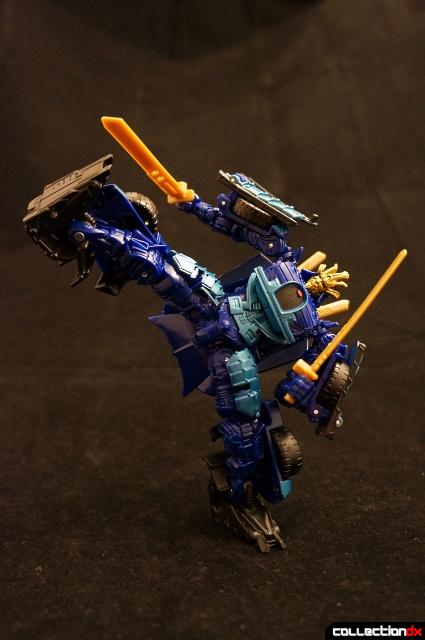 Articulation is very fitting for the Autobot Samurai. The head is on a ball joint and can look in every direction but is somewhat limited when trying to pose him looking upward, that is due to the back of the helmet that hinders the articulation a bit. The arms can swivel all the way around and can move inward and out. There is a swivel at the elbow and a ratchet joint that allows it to bend inward. No wrist swivel but there is some articulation that allows it to move inward just a bit. No wait articulation. There are some nice ratchet joints at the hips that can hold he figure in place neatly, even when attempting a one leg up kick, There’s also a swivel at the hips and the legs can also move forward just a little over 90 degrees, backward movement is somewhat hindered by the backpack. The knees can bend backwards at almost 90 degrees and the feet can only bend forward due to the transformation. 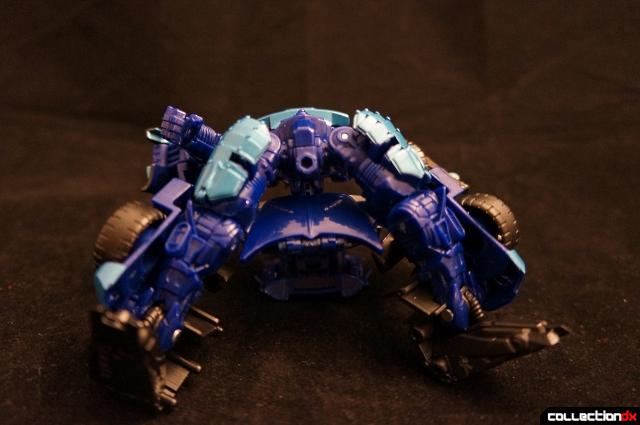 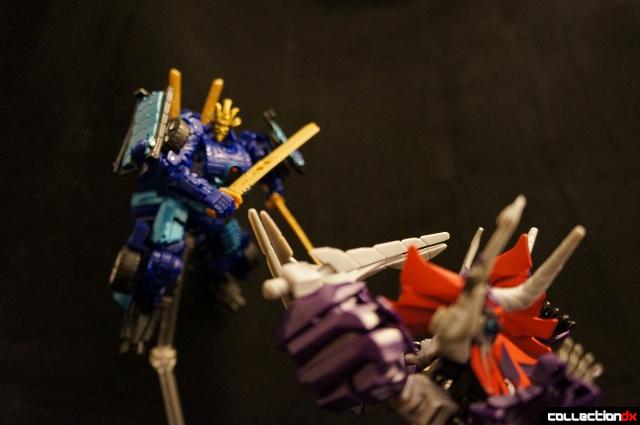 It might also be worth mentioning that Drift comes included with a port that would work well with Tamashii web stands. 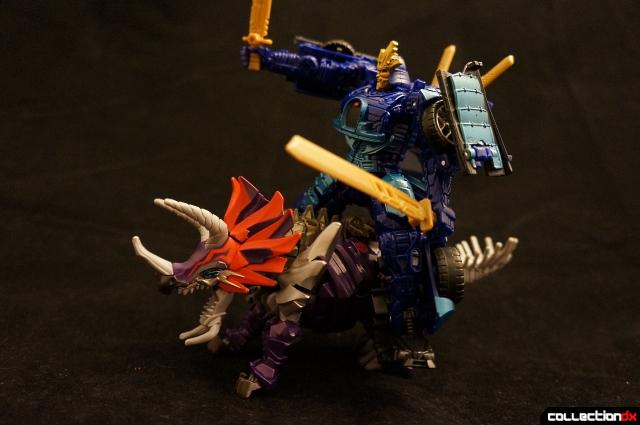 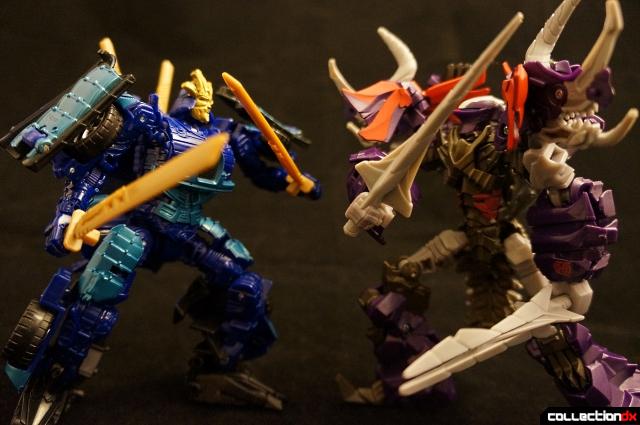 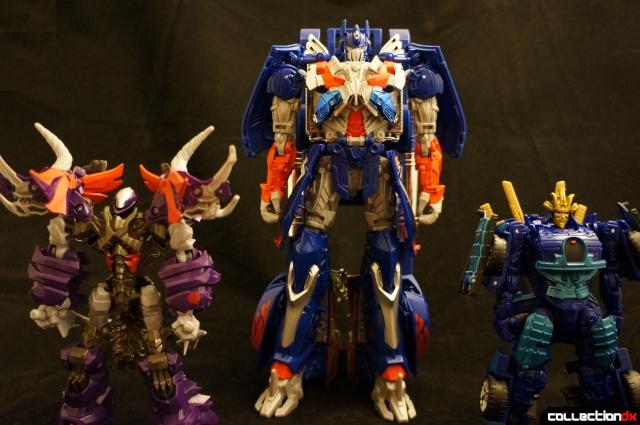 For fans of the movies or the just the general Transformer fan, Drift is nice addition to anyone’s collection.

6 comments posted
You could say Drift is a

You could say Drift is a Weeabot!

I have to say, in comparison to the live action movies' usual approach, Drift's unusually human face looks really out of place.

Agreed, I think a lot of people were shocked. Although, word around the interwebs is that he's wearing a mask. I guess there's no way to know for sure without talking to the folks who came up with his design.

There was a lot of talk around this installment having more "readable" character designs. Almost sounded like a mandate. If I was writing it I would probably have it be some sort of robot affectation that develops from human interactions. Like they start looking and acting like us from being around us, communicate etc. I think that would make sense.

I was initially disappointed with the toys' design and simplified transformation. But after seeing the film, I now understand how and why the toys came to be what they are now. Bay's more humanoid and kibble-free aesthetic must've thrown the toy designers a huge curve ball at them. So hats off to the people at Hasbro for doing their best in reinterpreting them in toy form.

Drift and Evasion mode Prime are my favorite ones in the entire line due of the amount of molded detail, articulation and playability. I do wish that they develop a leader class or masterpiece leveled, triple changer version. I'd definitely pick that one up.

I decided to pick up this guy up after reading this review and seeing him in the IDW comics, and I've been a bit frustrated the past few days trying to figure out how you put his swords on his back like that. I guess I didn't read very carefully! I just figured it out and he looks killer. I also love the contemplative look he can do with his hand in front of his mouth.

For what it's worth, one of my attempts to mimic the sheathed swords was pretty cool: If you leave the small swords pegged into the smaller flap jutting upwards (like the photo), and then peg the larger swords into the windshield / roof, sticking upwards as well, he looks like some sort of radiant "divine general" from japanese legend or something. His larger swords can also be left in place when transforming. They end up as a sort of sash on / underneath his chest. Valedictorian Drift.

Not a huge fan of the darker blue, however. I might try customizing him to be mainly white like he is in the comics.