I first came across James O'Barr's The Crow in a dollar bin at All Star Comics in Lowell, many, many years ago. The independent comics boom was in full swing and I was instantly drawn to the stark linework of the original series, not to mention the gloom and doom of the story.

I tracked down the other three issues to only find out that Issue 5 had not come out yet. I waited for what felt like YEARS before the final issue was released. Come to find out it was three years, and the conclusion of Eric Draven's story or revenge was finally printed in the Kitchen Sink Reprints in 1992. This long wait made me even more invested in the story than ever before.

For those of you who don't know, The Crow is the story of Eric Draven. One night Eric's girlfriend is brutally raped and beaten by a gang of thugs, and then they both are murdered. He is then resurrected by a spiritual crow that guides him in his vengeance on those who committed the horrible acts.

When they announced the feature film in 1993, I followed the development as closely as I could in the pre-internet days. I managed to meet James O'Barr at a screening of the film and got to ask him some questions. To say I was completely invested in the world of The Crow would be an understatement.

Of course, we all know that the film's star, Brandon Lee, died during filming. Sadly, that's what most people know about The Crow. But to me, The Crow is so much more than that.

There have been several sequels and spin-off comics with other people being resurrected by The Crow, but none of them have held a candle to the original. Thus, my allegiance is to the original comics and film only.

There are precious few toys from the film, and this one is the most recent. As part of Funko's ReAction Horror sub-line, The Crow gets the vintage 5 points of articulation treatment. The truth is, as much as I love The Crow, this figure is a mixed bag.

First off let's just take a look at the retro-inspired blister card. It's cool, but the real flaw here is that The Crow movie didn't come out until 1994, much later than these plain carded figures were on the pegs for other lines. Sadly if they were really doing a "what if" type scenario, they would have been more in line with the loud, gaudy "extreme" toys of the time. 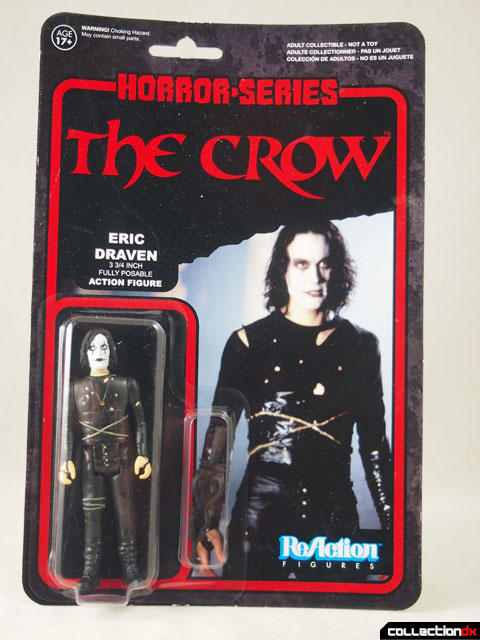 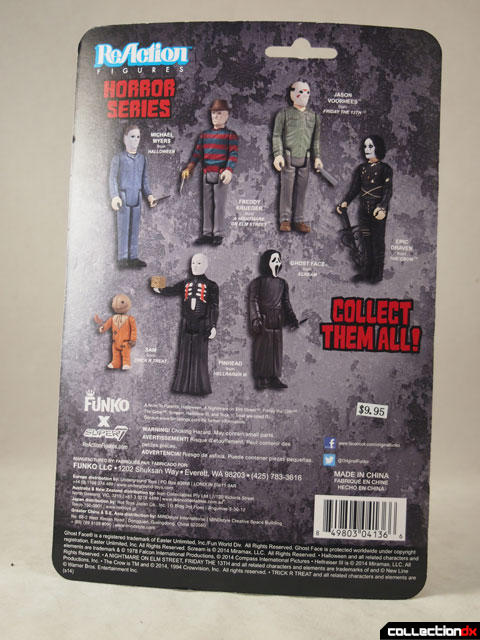 The 3 3/4 Eric Draven is sculpted reasonably well, and the goofy face sculpt fits in with the aesthetic they were going for. 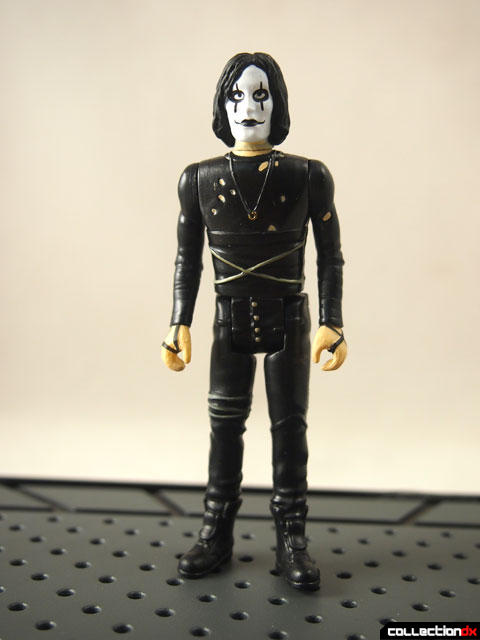 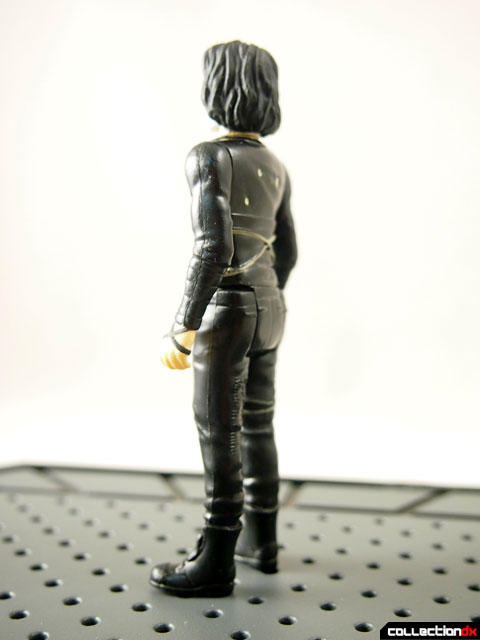 Paint and detail are nice with no noticeable flaws. 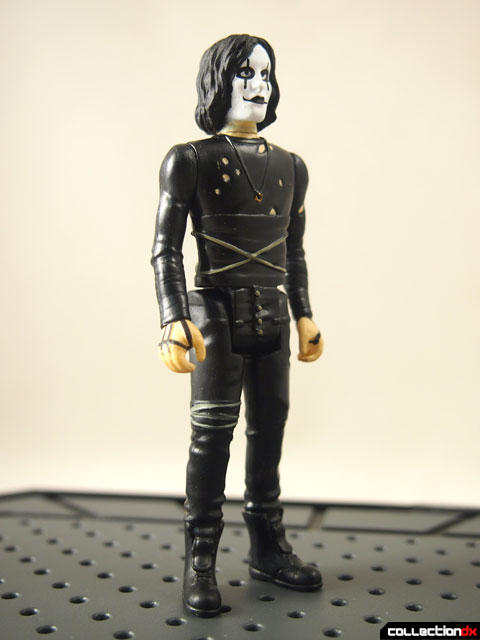 Every ReAction figure seems to come with an accessory, and this one is no exception. Eric Draven is packaged with... a candelabra? Of all the accessories they could have packed him with, they chose this? How about a Crow? Or a guitar? or even a vinyl coat? It makes no sense. 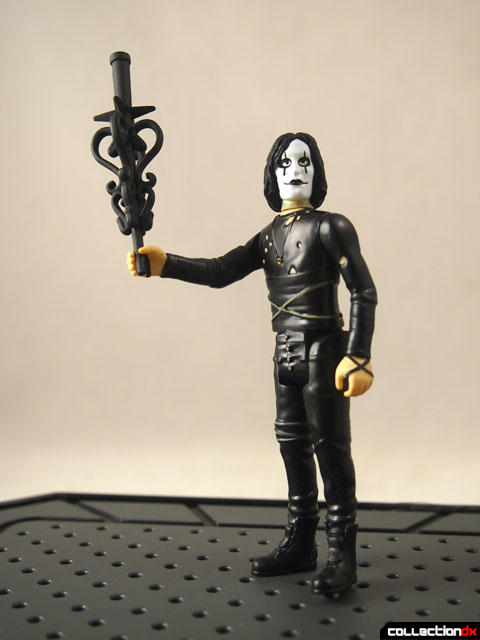 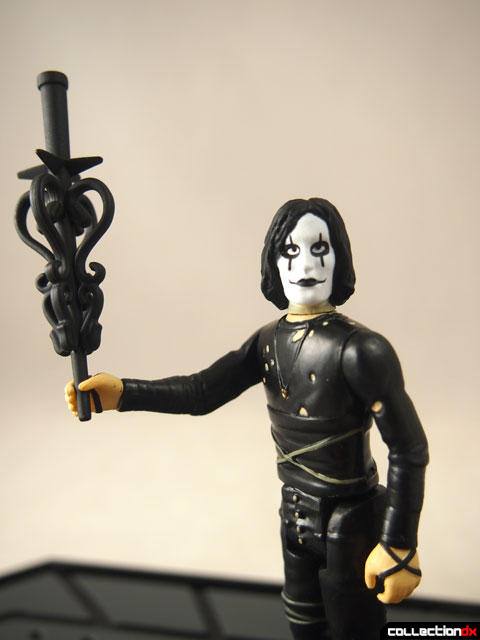 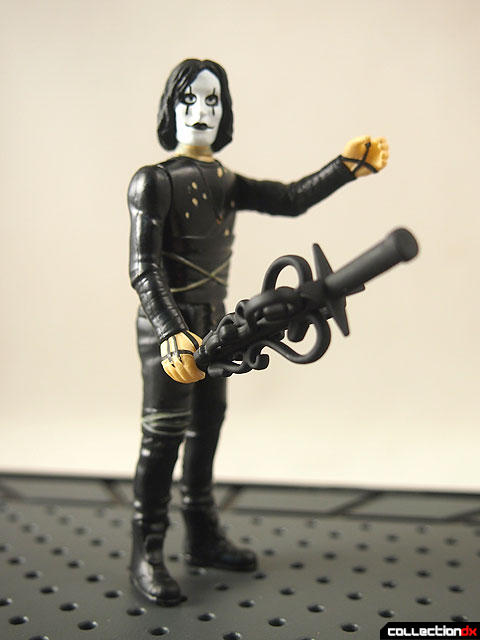 And another issue - no peg holes on the feet! Pretty much every ReAction figure has them. Why not him? He's difficult to stand otherwise. 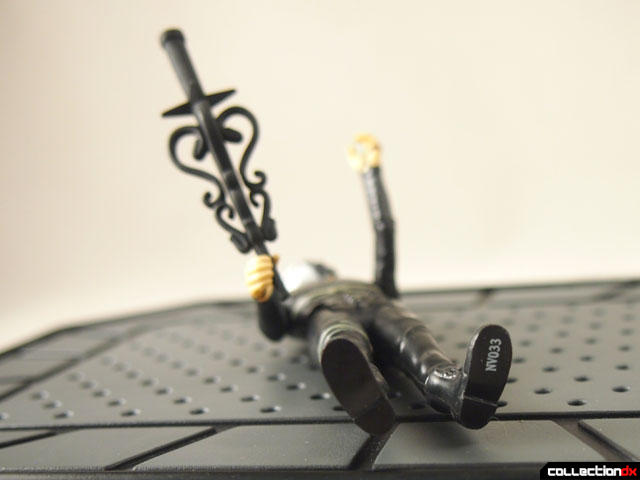 My nitpicks those are of a toy enthusiast, and not the casual collector looking for an inexpensive piece of Crow merchandise. I imagine most people won't even take this off the card because it just looks too damn cool.

The accessory is the weathervane that Eric fights the crime boss with at the end of the film because (as I'm sure you know, but I want to bitch) they couldn't leave the fantastic story of unrelenting vengeance alone when the comic was adapted, and instead introduced a typical movie bad guy with the ability to make the hero vulnerable for a yawnworthy final battle.

The Crow means a lot to me, too, so I want this one (as well as most of the others in the line, for that matter). WARNING: Boring personal stuff ahead! LOL Anyway, I'm the youngest of 3 brothers so when I was growing up, most of the stuff that I was introduced to, I found out from my older brothers. They had the most influence on me. But when I was about 12ish, a friend of one of my brothers started to introduce me to all sorts of stuff I had never heard of before, particularly in the areas of music , books, and comics. The dude became sort of a mentor for me and we really hit it off (years later, my brother would confess to me that he was actually jealous of this). Anyway, among the things he told me about was indie comics and I remember actually being with him in the comic shop the day I first bought Calibur Comics #1 (the Crow's first appearance) and iirc, Crow #1 at the same time. We both became big fans and I used to annoy the hell out of the poor guy who worked at the New England Comics in Quincy, asking him every Friday if the new Crow was out. Issue 4 in particular took forever to be released and when it was, he was like "Here's your damn Crow!". LOL. Eventually he was forced to move away but we kept in contact via writing words on pieces of paper and sending them to each other in the mail. (These were called "letters" for you younger folks. LOL) The very last letter I got from him (and still have) actually mentions how he lost his Crow comics but heard about how issue 5 was finally coming out in a different format from a different company. I don't know if he ever got to read it though because the next time I saw him, it was on the news after he committed suicide in a prison cell after being arrested for the murder of his girlfriend. I have no idea what lead to that but unfortunately, he came from a pretty messed up background and I don't think anyone who knew him was surprised his life ended early and under bad circumstances. But he still had a huge impact on me and is someone I miss to this day. So I still think of him whenever I think of the Crow.