It's no secret that Japan is really into making mascots and characters based on of all kinds of things. Kantai Collection with its multitude of young ladies representing the Imperial Navy of World War 2 era Japan are one aspect of this cultural trend. Alongside their most popular character, Shimakaze, comes the true mascot of the franchise...

Accompanying Shimakaze at all times are a trio of catlike machines who act as her familiars. Each one is a Rensouhou (literally "twin-gun turret") and brings with him a charm and likability that extends far beyond just the fans of this already popular online game. Recently character goods maker Aquamarine released their Big Rensouhou-chan vinyl and I decided to check one out because honestly just can't say no to such a happy little critter. 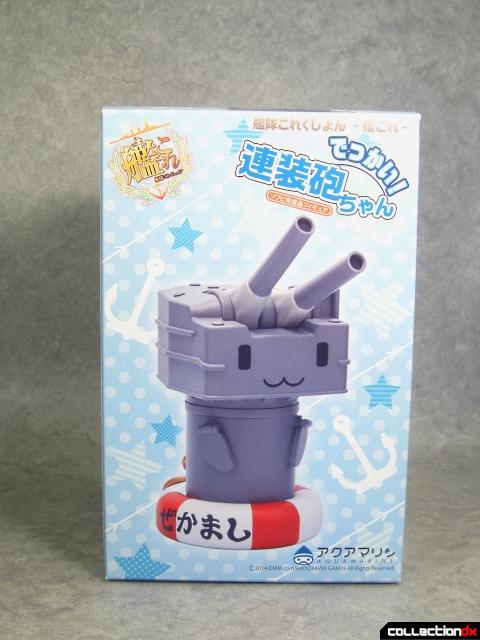 The Big Rensouhou-chan comes in a light cardboard box with lots of pictures of the toy on each side. 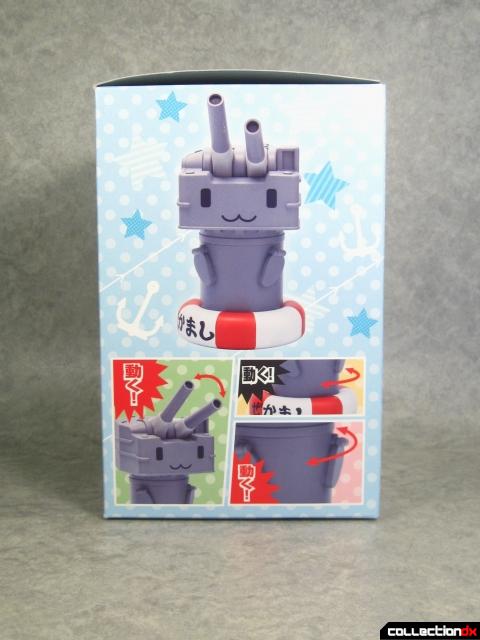 These pictures show you all the things Rensouhou-chan can do! Since he's a vinyl, this amounts to having a few swivel points. 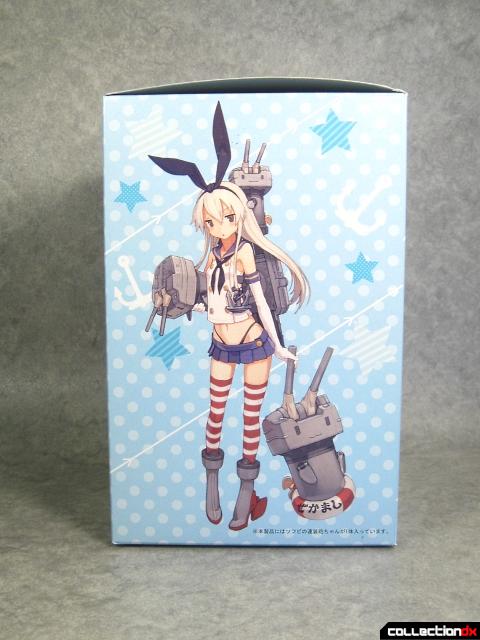 On this side, Aquamarine included the stock CG art of Shimakaze that shows the three Rensouhou-chans who accompany her into battle.

I will not be covering a Shimakaze figure anytime soon. 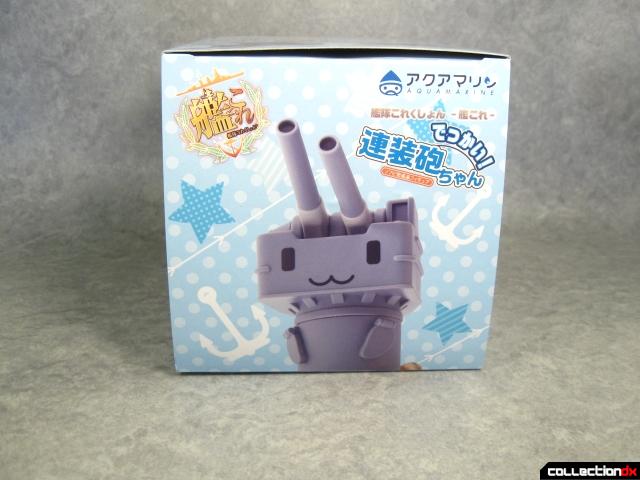 Rensouhou-chan's cuteness abounds even on the top of the box! 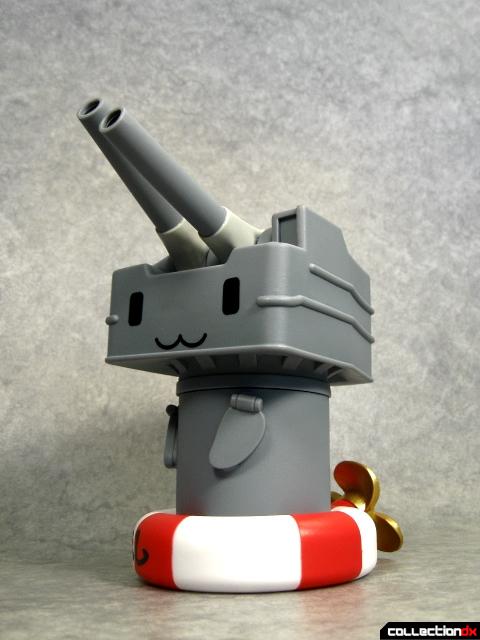 Once you take his out of the package, Rensouhou-chan greets you with his pleasant smile. This vinyl represents the largest of the three familiars with his handy life-preserver. Rensouhou-chan is about six inches tall from the bottom of his base top the top of his twin cannons. 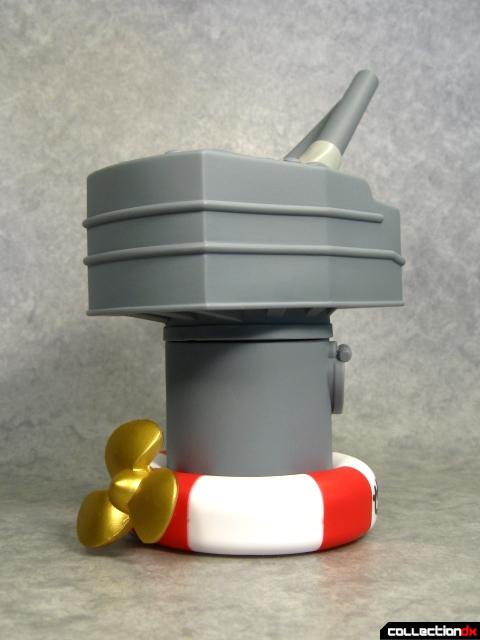 Aquamarine did a great job all around with the detailing on this figure. 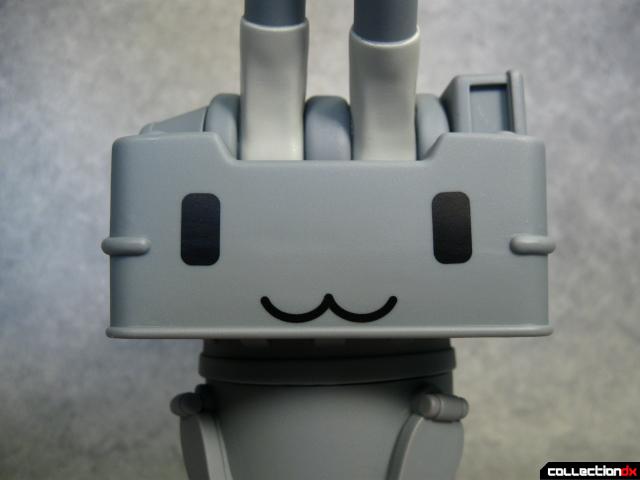 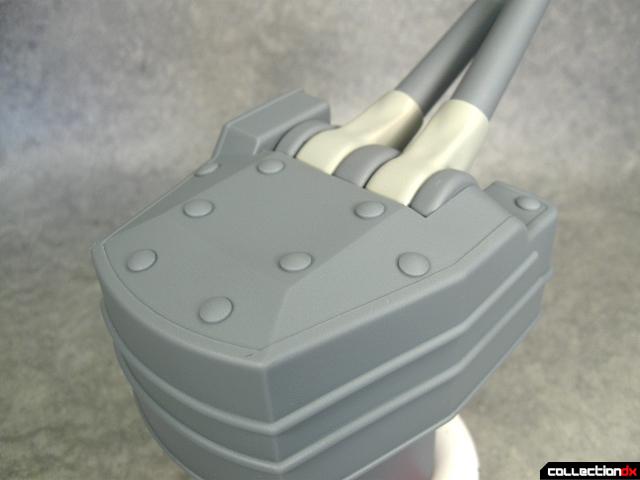 The rivets on the top of his turret give Rensouhou-chan a pleasing cartoony machine look. 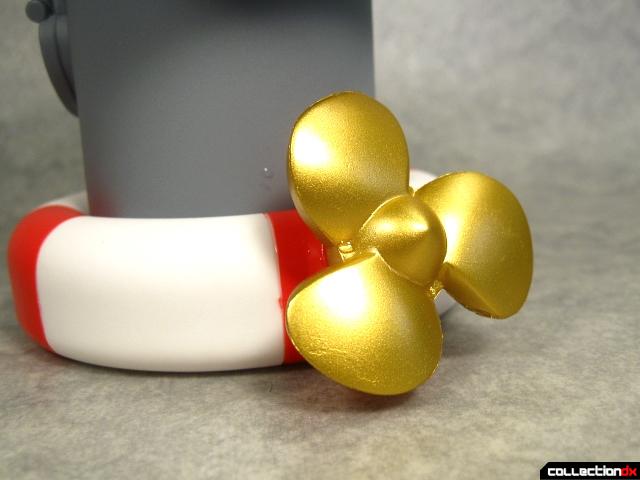 Her big golden propeller is fixed in place but looks the part. You can tell Rensouhou-chan is an aquatic cat by this very practical tail. 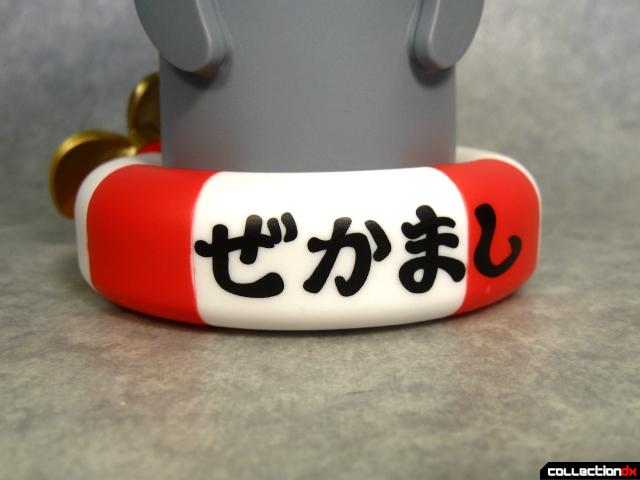 Printed on Rensouhou-chan's life-preserver is some hiragana reading, "zekamashi" which is simply "Shimakaze" written backwards. Also I should mention that despite being a mostly hollow vinyl, this Rensouhou-chan cannot float. he's a bit too heavy and has a few seams in his construction that let water in. 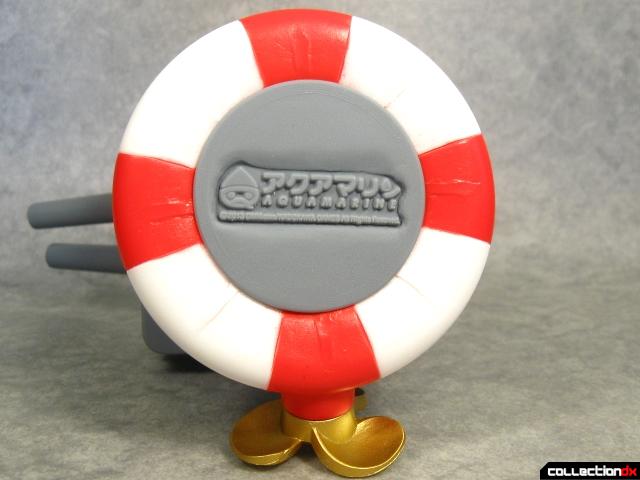 On the very bottom is Aquamarine's logo and some copyright information. 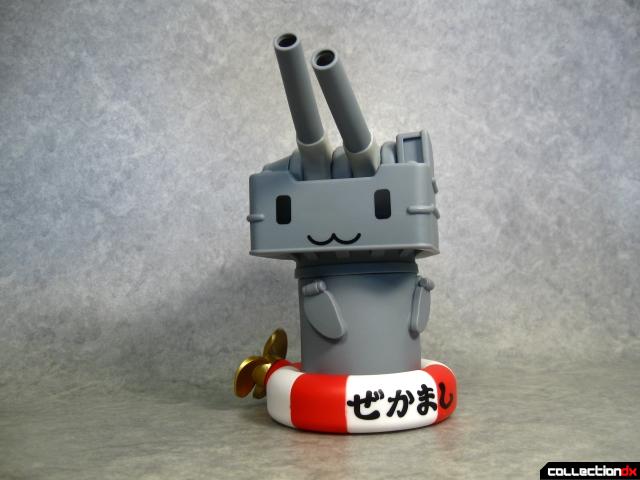 For articulation, you can rotate Rensouhou-chan's head and life-preserver as well as raise his guns up and down as a single piece. 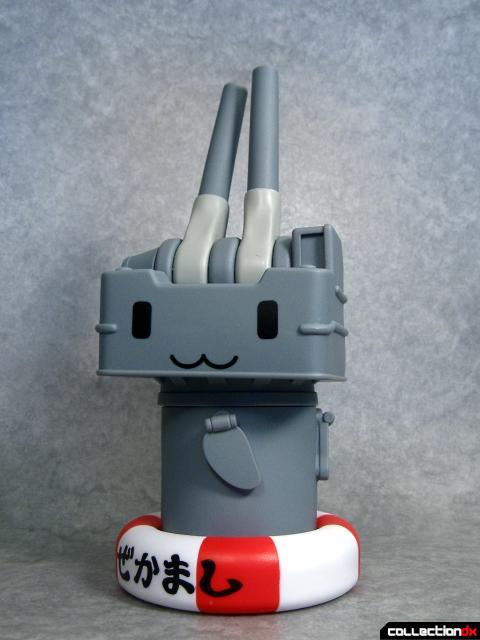 Flip the guns up all the way and now he's rocking a weird pompadour.

With his guns pointed up, it's easier to see the one big flaw with my figure. Poor Rensouhou-chan's guys were slightly warped out of the box with one curving inward. Now since this is a vinyl figure, it is possible to fix this using some low heat from a blow dryer or some warm water. Right now I must be content with a slightly derpy Rensouhou-chan. Unfortunately it seems the toy is packaged in a way that forces the guns together with the tips threaded through an oval shaped holder piece. 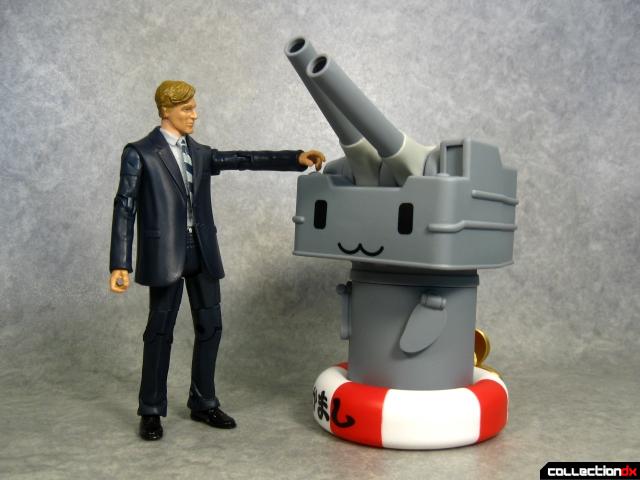 Despite the flaws in this figure, Rensouhou-chan's charm is still irresistible. Even Scale Eckhart agrees! 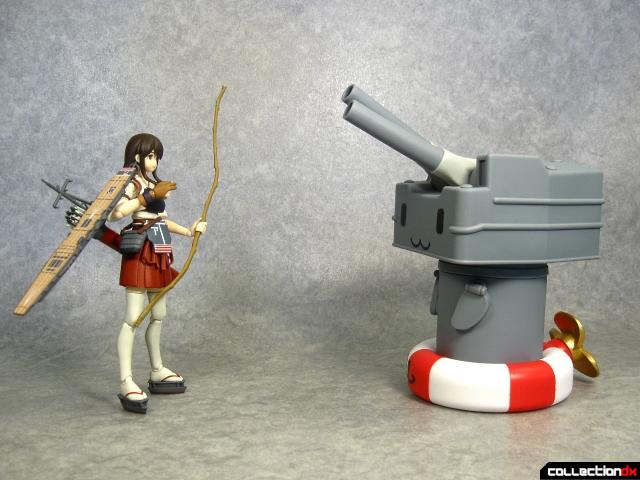 "Oh Rensouhou-chan! Were you separated from Shimakaze? Come with me and I'll take you to her." 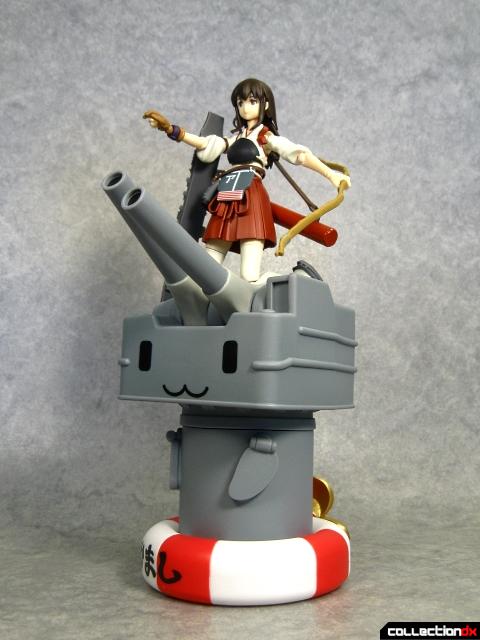 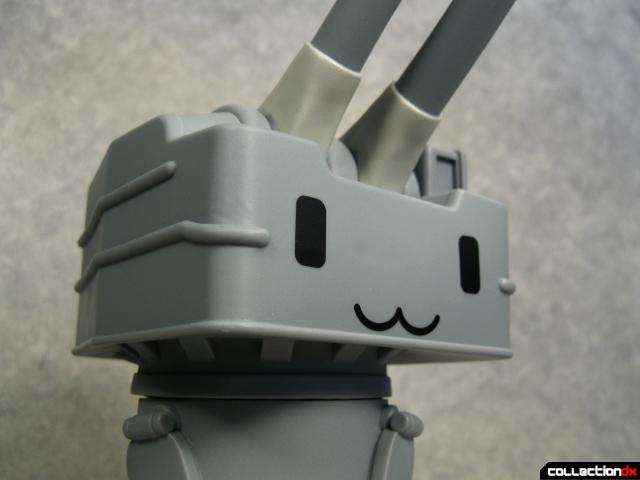 Aquamarine's Big Rensouhou-chan is a cool piece of modern vinyl that gives you a sizable and sturdy representation of Kantai Collection's breakout mascot. The craftsmanship does come with a price though as this Rensouhou-chan will run you 5,000 yen MSRP. Cost aside, Rensouhou-chan is brimming with charm and likability which combined with his size creates a great piece of cool Japanese design sense for your shelves. I definitely recommend this figure for fans of KanColle and even non-fans who like a neat looking character.