While there seems to be a full-on resurgence of Alien in the toy collecting world, for me the only Alien that matters is the one from the first movie, dubbed "Big Chap". It's name is just used as a way to differentiate it from other Alien suits, earning the name the crew gave due to the size of the suit on actor Bolaji Badejo.

This S.H. MonsterArts release seems like one of the best of the modern releases. I don't have any of the other comparibles such as NECA ones, but this seems great.

Alien S.H. MonsterArts arrives courtesy of Bluefin Tamashii Nations. Get yours at these fine retailers

The box is nicely done, but I would have taken advantage of the classic nature of the figure and gone full retro. 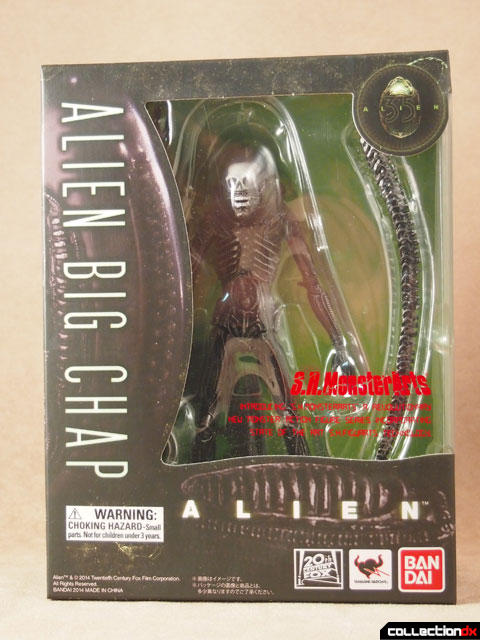 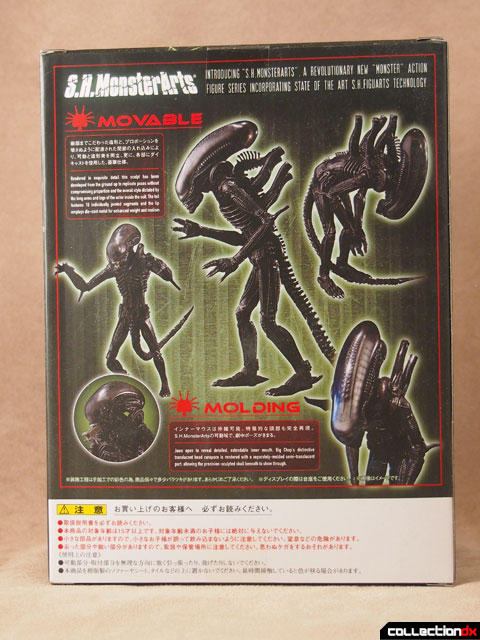 Out of the package, Alien has minimal accessories - just a special Tamashii Stage stand and one extra set of hands. The stand holds the figure well, but is really not needed for basic poses. 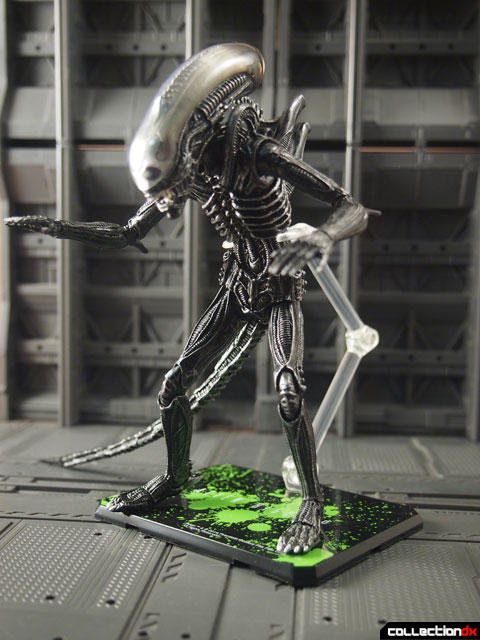 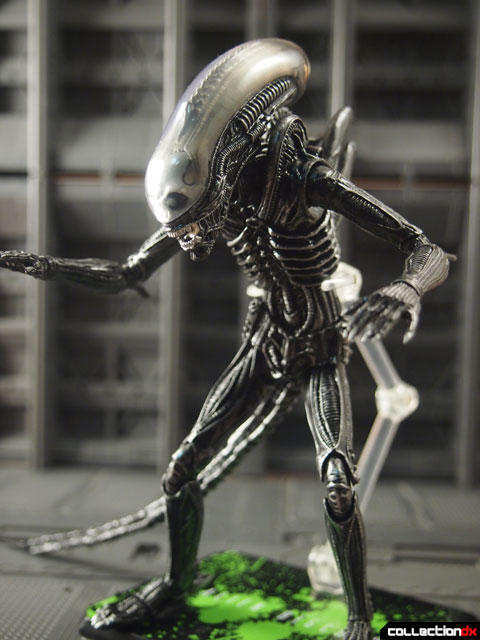 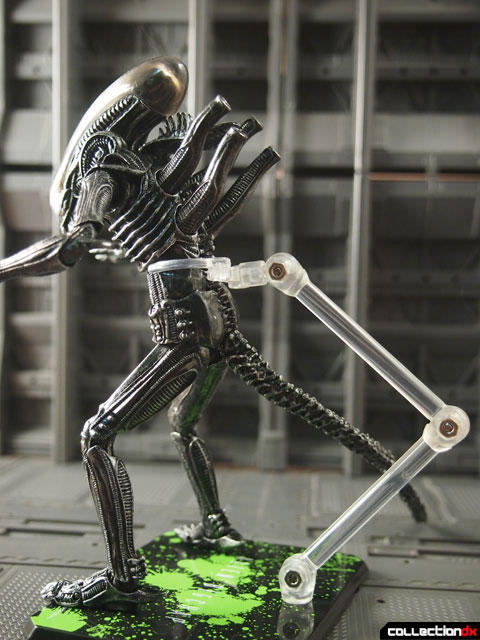 Alien stands 18cm tall and features a solid build and numerous points of articulation. Double joints at the elbows and knees, dual neck and chest joints and a host of others. 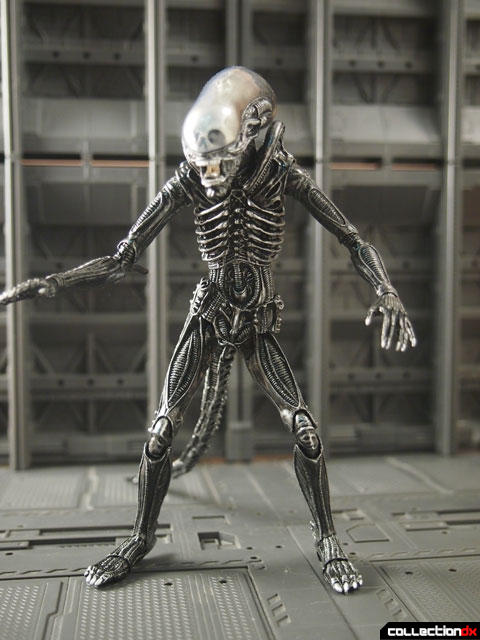 Even the appendages on the back are articulated. 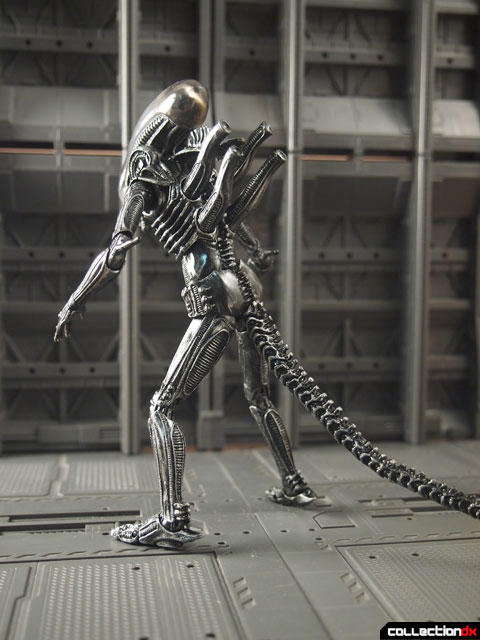 The tail contains 18 individually jointed sections that end in a metal tip. 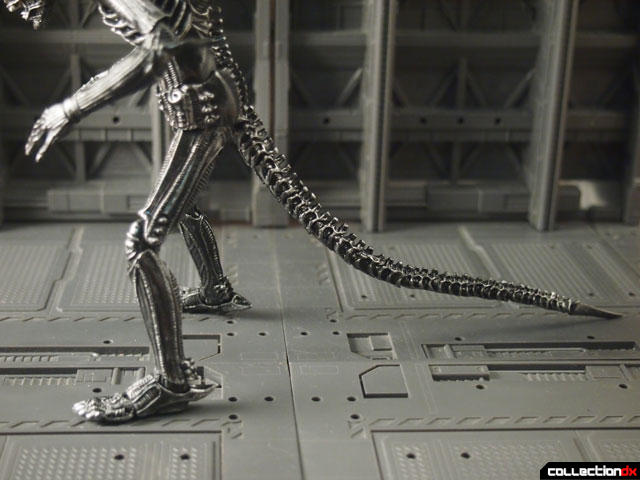 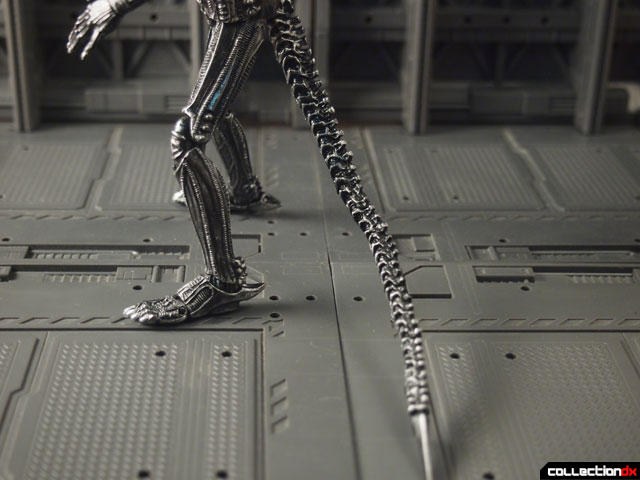 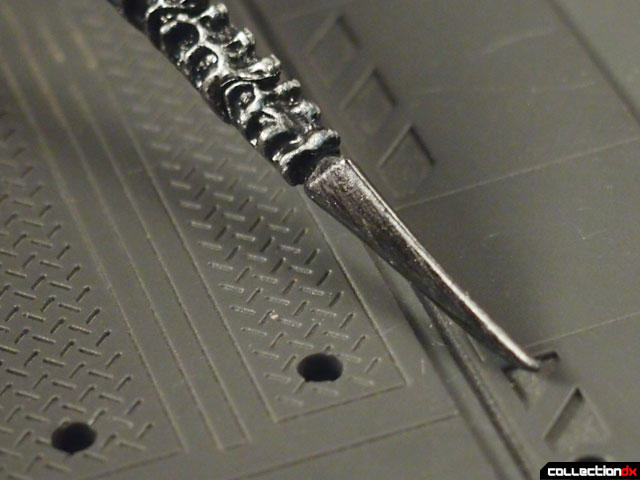 You can use the tail as a sort of prop to help stand the figure. 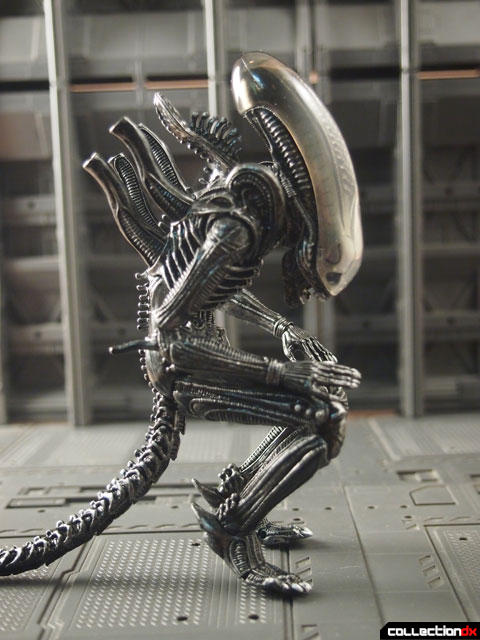 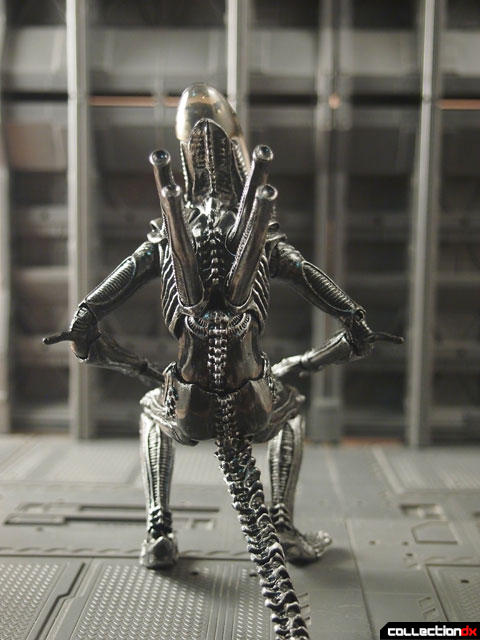 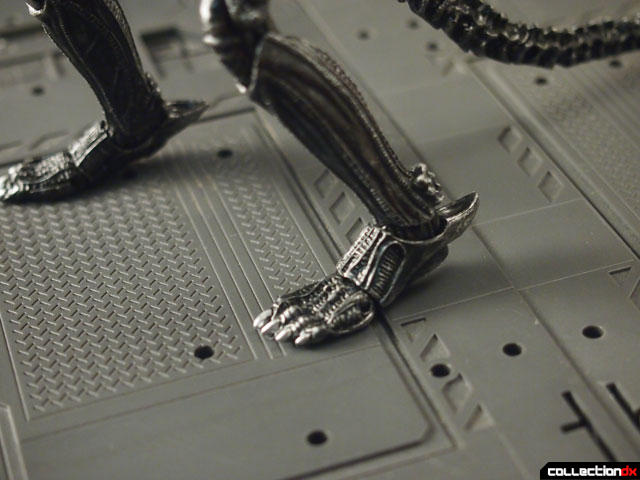 The real draw is the large translucent dome that covers the Alien's head. Within you can see the human-like skull that is omitted from later versions. The dome seems to have just the right amount of smoky translucency. I can't vouch for how screen-accurate it is, but it looks good. 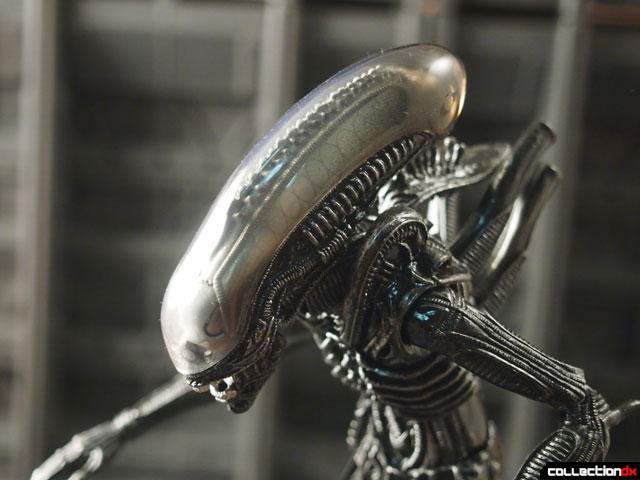 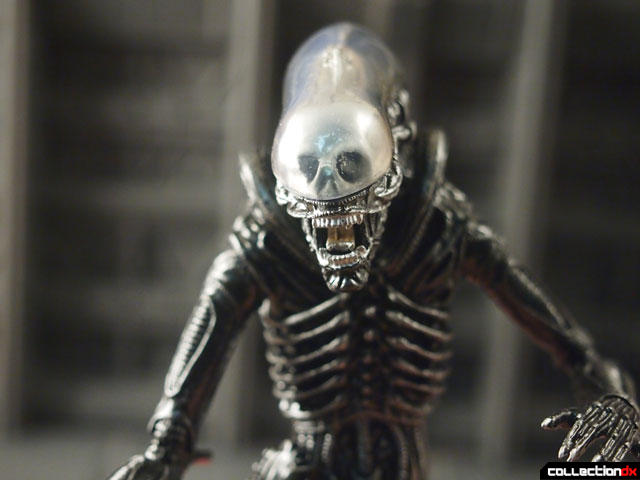 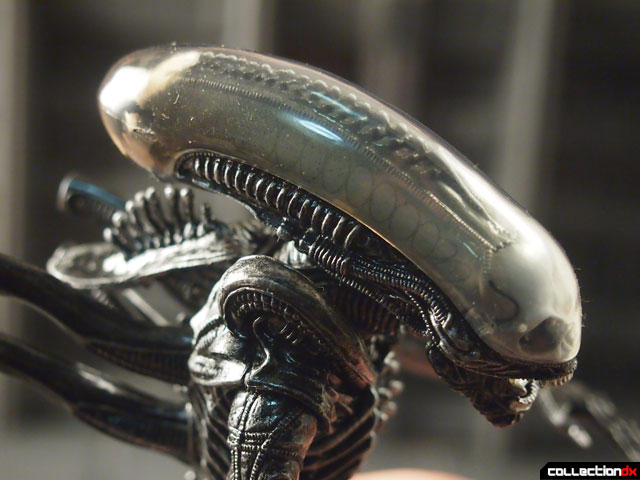 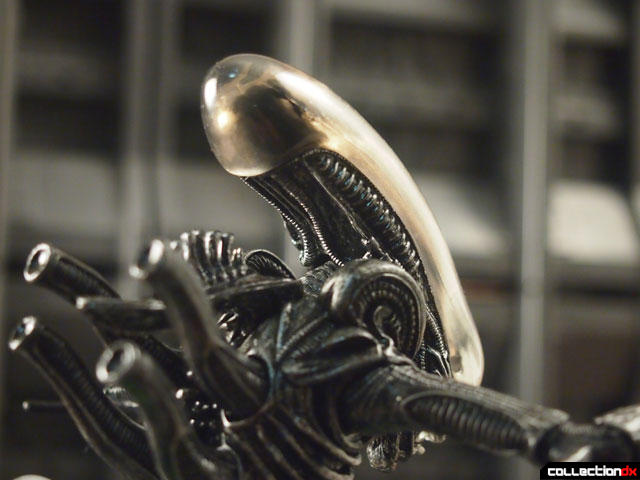 The jaw opens and you have to tap the back of the head to get the extending inner mouth out. I had to use a small tool to pry it out a few times. Also worth noting is that the jaw does not stay closed, ever. 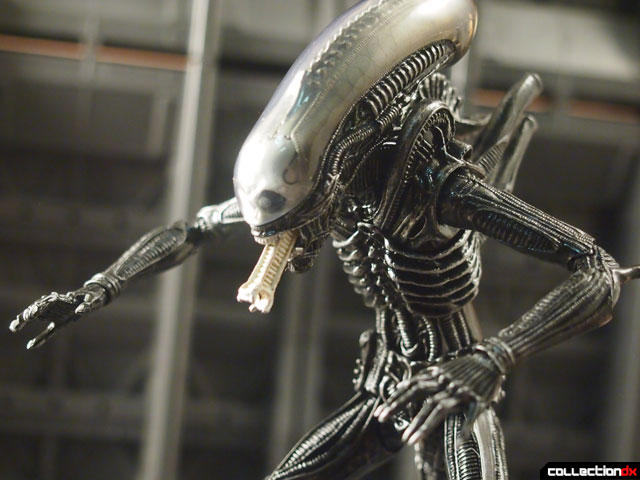 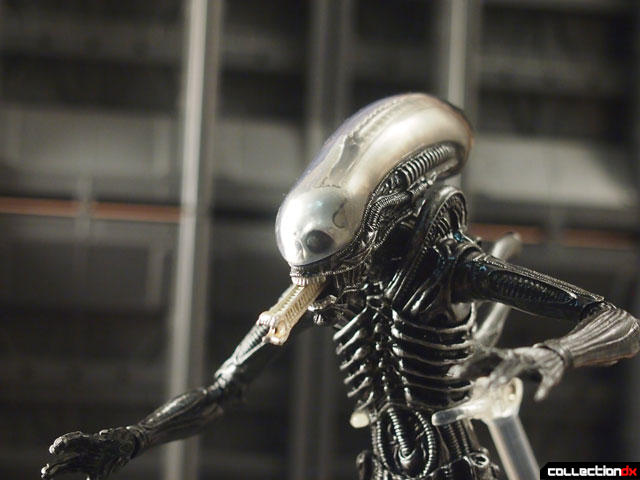 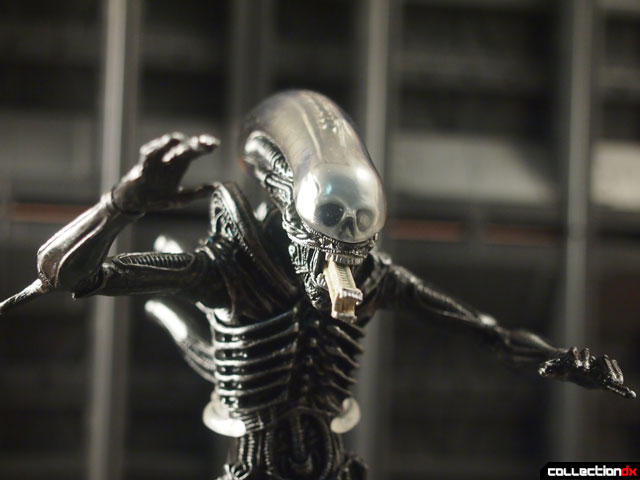 The variant hands have fingers slightly spread apart. They pop off and on easily, although the ball is rather small. 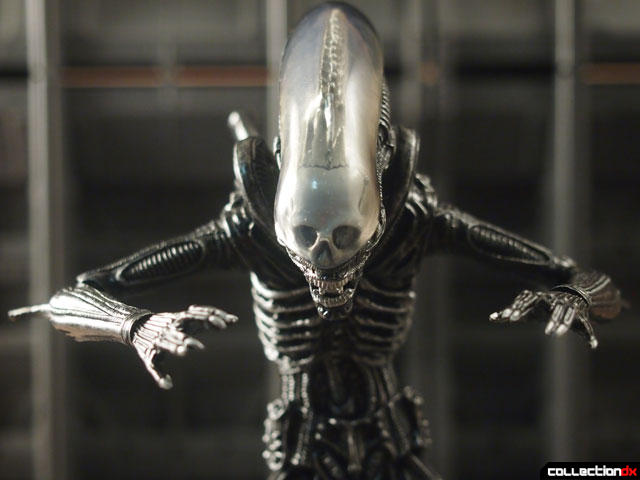 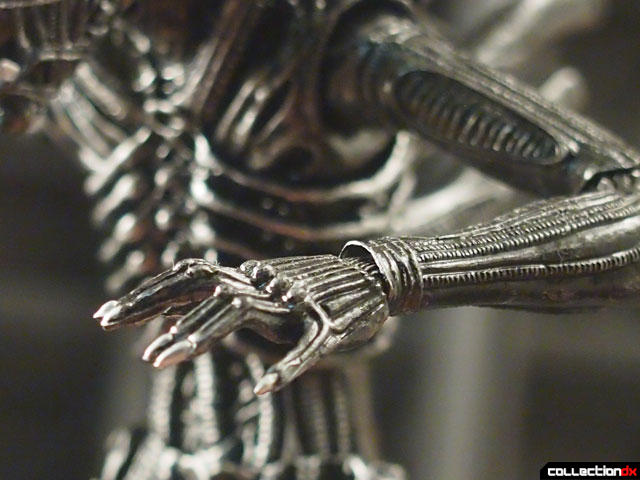 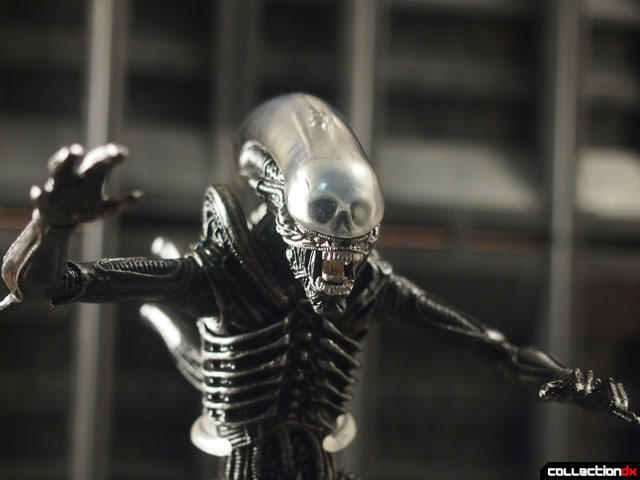 Overall it's a cool release that doesn't have a lot of extras. This is actually fine by me - less parts to lose. For more information, check out the Tamashii Nations page on the item which goes into more detail about its manufacture. 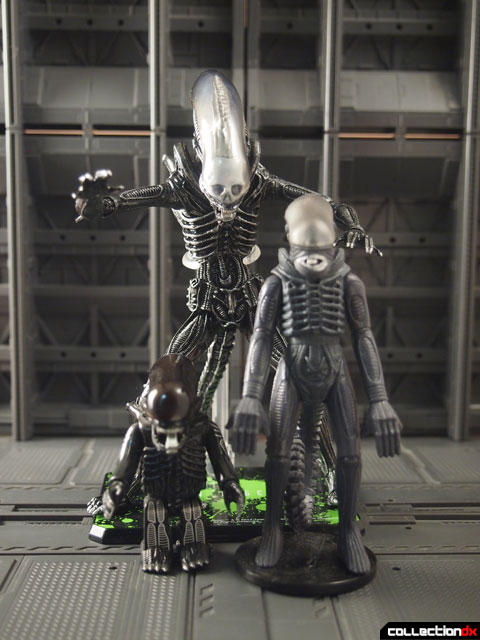 Alien S.H. MonsterArts arrives courtesy of Bluefin Tamashii Nations. Get yours at these fine retailers

Great review Josh! Looks like Bandai did a excellent job with this one. I'm trying really hard not to cave in and buy it now. The cool pictures and poses aren't helping!

Great review Josh, and using your Kotobukiya chainbase background (I really need to build one myself) makes it even better. The only thing that's missing is an orange cat... right? riiight.

There's nothing scarier than a single Xenomorph and old "Chap is why Alien is still a great film when the franchise was in its purest form. One of the reasons I'm having a hard time focusing on playing Alien: Isolation (coming eventually to twitch.tv/hadimus_prime #cheap pop) is that there's only ONE alien to worry about and you never know when it's going to drop down from the ceiling, tail-through your neck- first.

I can vouch for the translucency of the skull, which is far, far lighter than the screen-version, and lighter even than the sub-par Revoltech version, which I'm loathe to admit I own. I'm guessing it's a sorta-kinda homage to other retro Big Chaps which are desperate to highlight Giger's masterstroke of a humanesque skull underneath a blind, phallic dome (and themes the whole evolution cycle of the Alien). It's still the one to own posing-wise, but yeah, dat skull will throw a lot of hardcore fans. And some of the proportions feel a mite off, namely the length of the tail and the 'pipes' out of it's back.