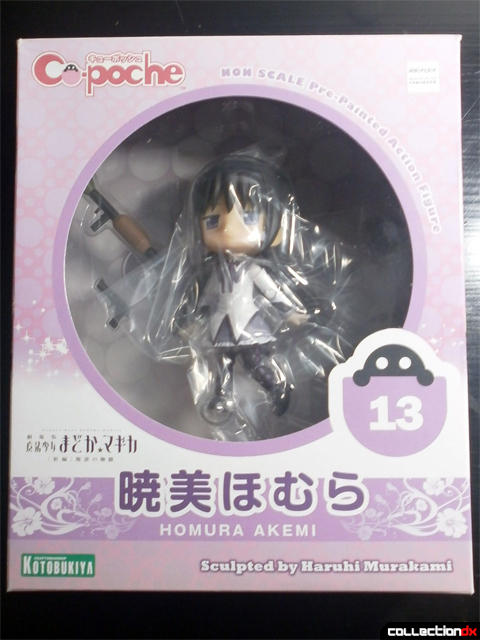 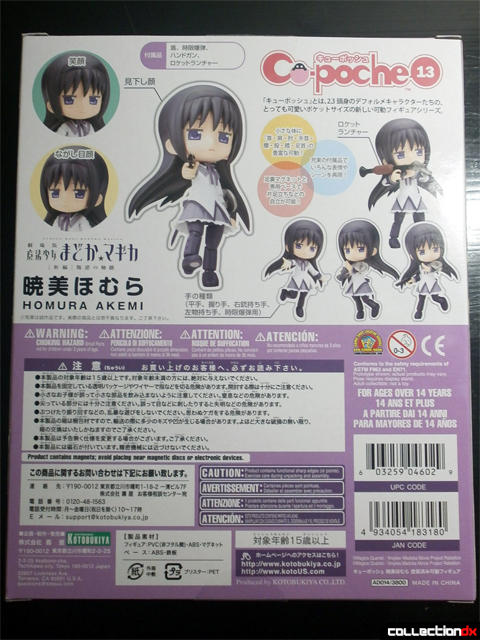 The box is nothing special, with a clear window into the contents and plenty of pictures on the back. 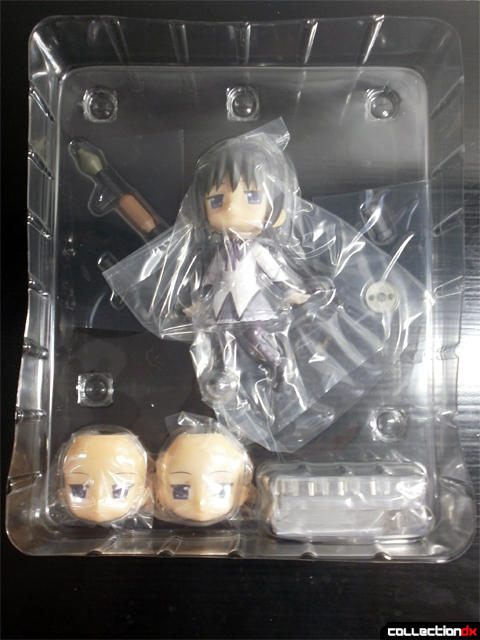 On top of being in plastic trays, the contents are all wrapped in plastic inside. It adds more time to the unboxing process, but the extra care put into it is a nice touch. 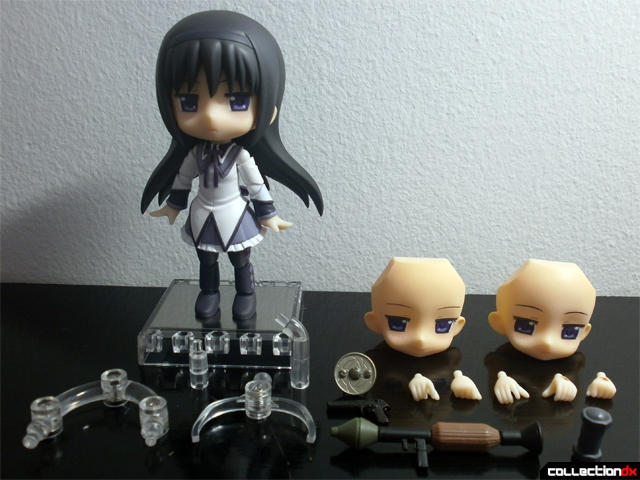 Straight out of the box, the figure has impeccable paint apps all over, even the Soul Gem on her left hands are rendered with incredible detail. On top of the figure itself, you get two extra faces, five extra hands, three weapons (a handgun, a rocket launcher, and a time bomb) and the shield that goes on her left arm. While the figure is (sometimes) capable of standing on its own, also included are a display stand and several attachments and adaptors. 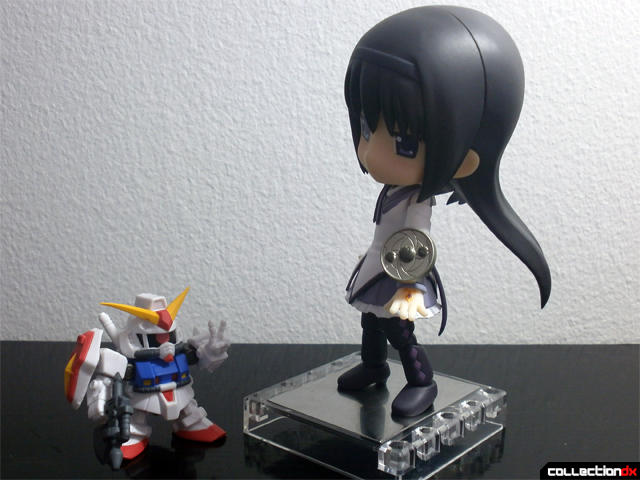 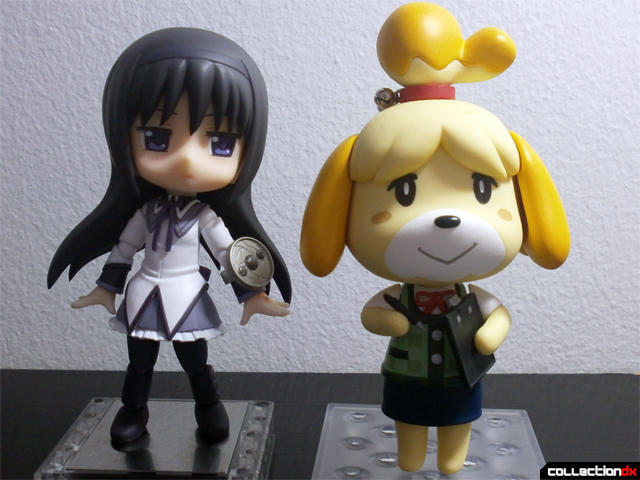 At a mere 4 inches tall, Homura's definitely in the Nendoroid size class. 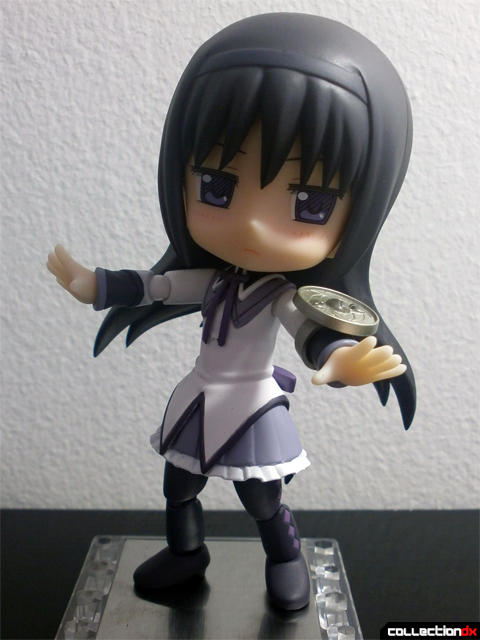 The only accessory that needs to be attached is her shield, just remove the left arm and slide it down. Both the display stand and the bottom of the feet have magnets in them, so you don't even need the display arm to pose your Cu-Poche. There's a good ninety degrees of articulation at the knees and elbows, the only joints I had trouble posing properly were the hip joints that are difficult to swivel properly. 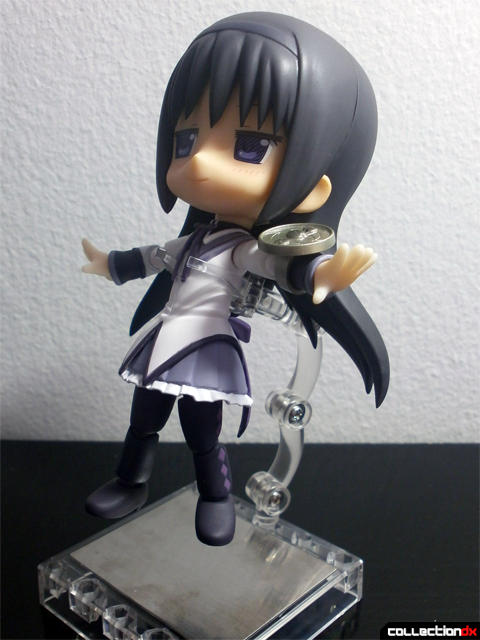 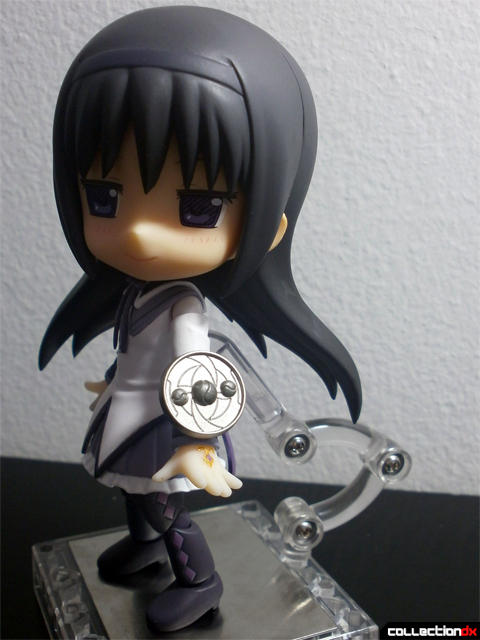 The claw grip for the display stand arm is somewhat oversized for Homura, but it doesn't get her far off the floor. She has a hole in her back that you can plug the stand right into, and one of the adaptor pieces allows you to use the stand without her hair getting in the way. 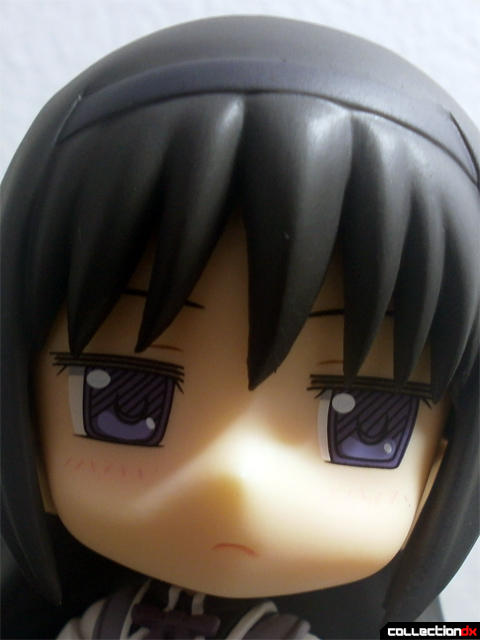 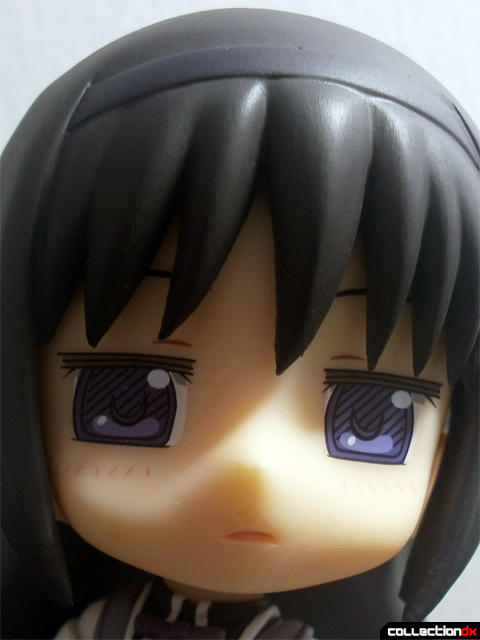 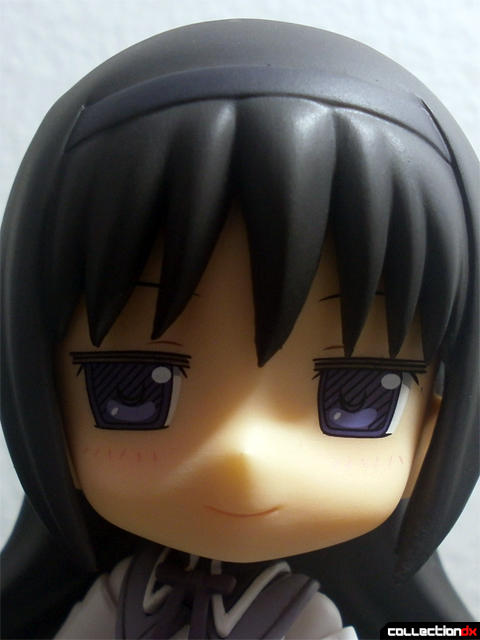 She comes with three faces: an indifferent expression, a shocked look, and a rare one for a Homura figure: a smiling face. It's not the world's biggest smile, but it's still my favorite of the bunch. 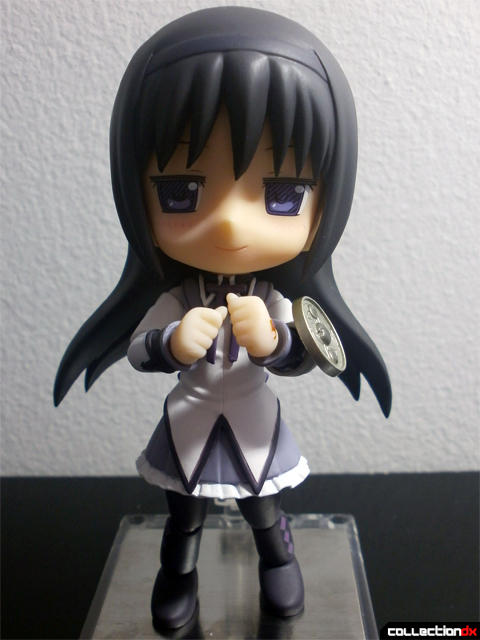 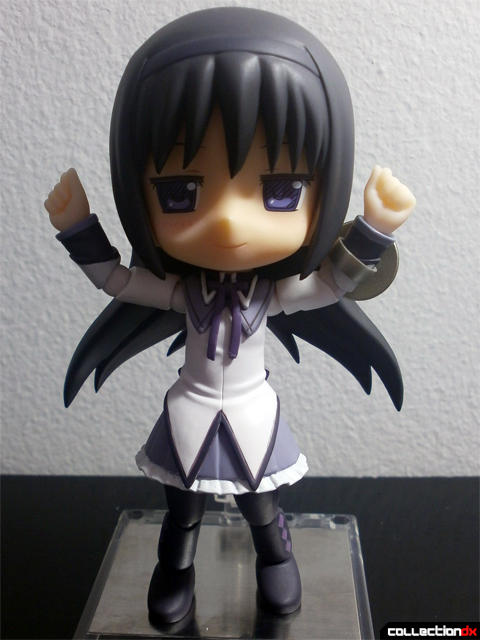 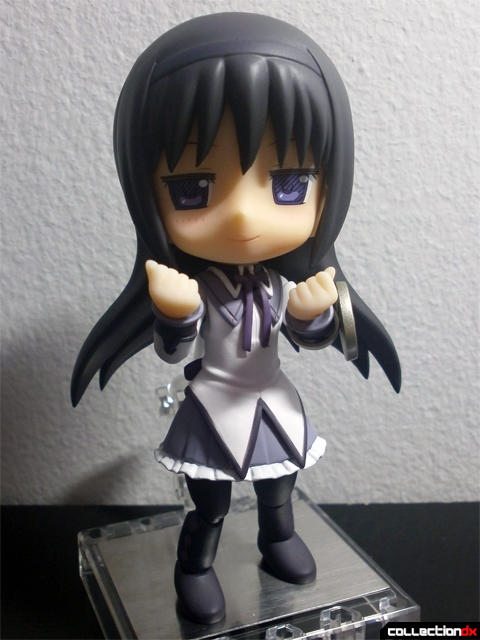 Homura's default hands are splayed, but it also comes with more traditional clenched fists. While fistfighting is not the method of (most) magical girls, there's still plenty of other poses you can use them for. 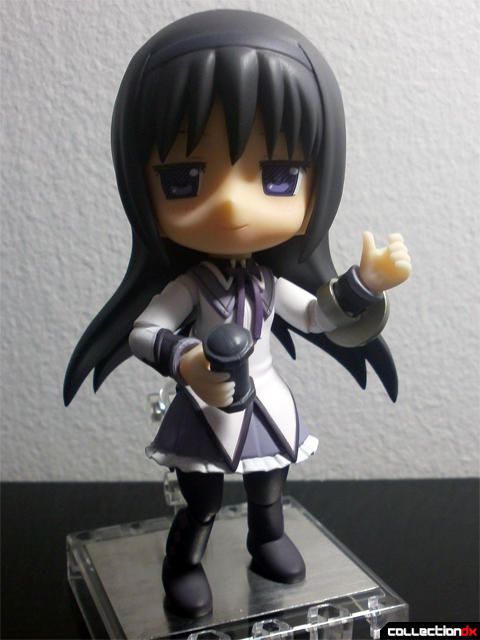 First up for her weapons, the time bomb. One of her hands is specifically to hold it, it has a peg that plugs into a hole in the bomb. 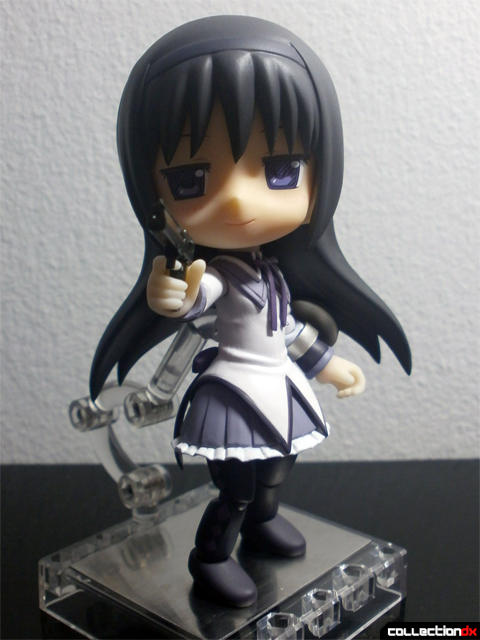 Second, the handgun. It's the least detailed of her accessories, it's painted in solid black. 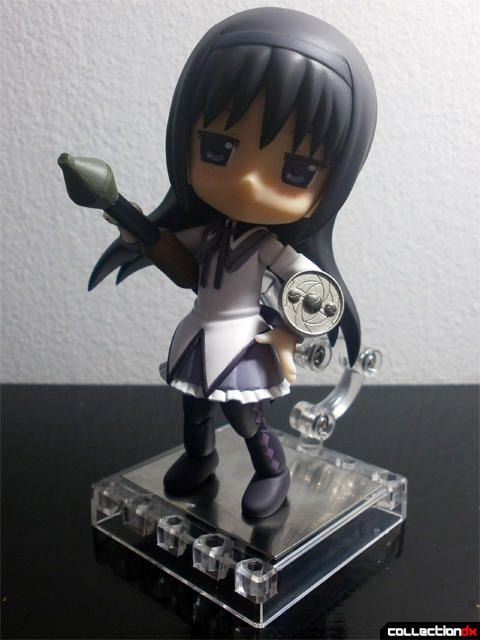 Lastly, the rocket launcher. It's pretty large and somewhat difficult to get her to hold, but it's worth the effort. For some reason this figure omits one of Homura's trademark weapons, a golf club. One of the left hands even feels like it was made specifically for holding one. But I can forgive this oversight, because her hands can hold practically any other small-scale weapon I have, which has proved incredibly enjoyable. 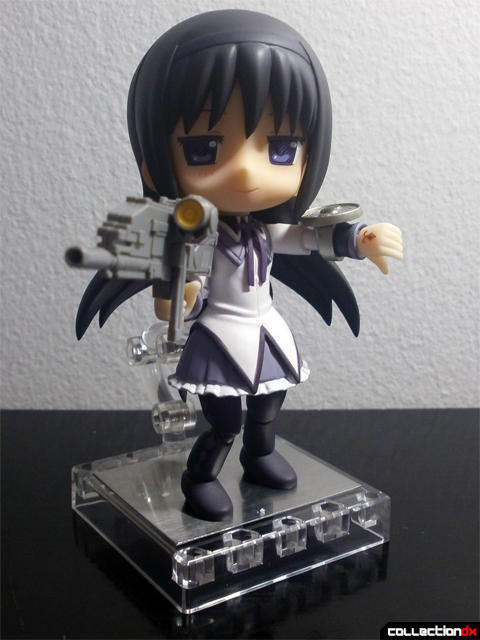 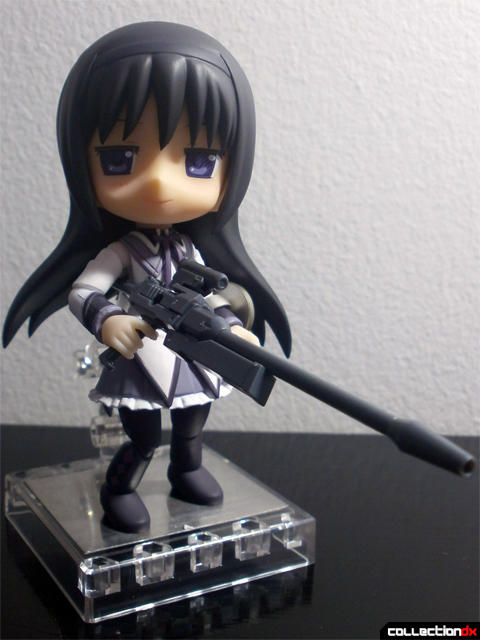 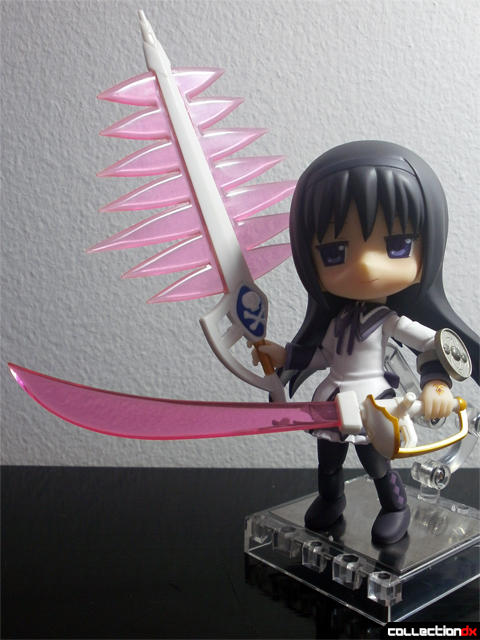 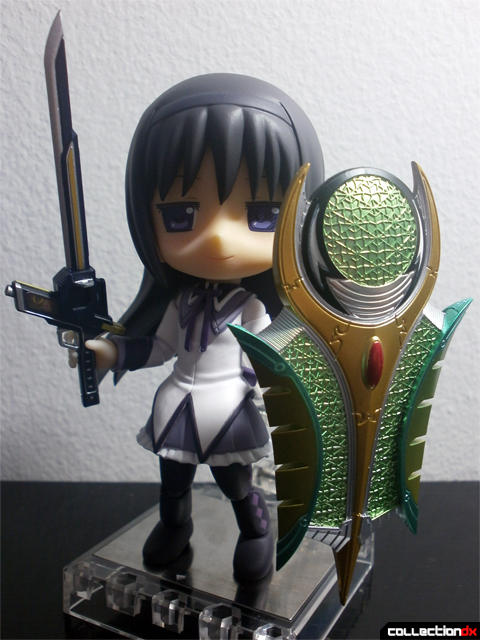 I would honestly say that the Cu-Poche line has not only exceeded my expectations, but proved a much more pleasant experience than the average Nendoroid. Homura was well worth the wait, and I'd highly recommend her to any fan of Madoka, or just anyone who wants a sampling of this still fairly new collector's line.

I would consider getting this version of Homera but it's missing one glaring thing, her glasses & braids combo. I adored that version of her.