South Korea and The West have enjoyed an agreeable relationship for decades, with an open exchange of cultural and business interests. Whereas post-WWII China turned inward and violently rejected external influences, South Korea, not unlike Japan, turned outwards, and today we Westerners love Kias, Psy, and Oldboy. However, the most important aspect of South Korea’s culture has remained relatively isolated: Robot Toys.

Mecha properties have long been a part of South Korea’s entertainment landscape, whether imported (usually) or home-grown (often, mutated foreign properties). The eighties’ home-video explosion brought to our shores embarrassing fare from around the world, but South Korea’s exports were unusually dire. Diatron 5 and Defenders of Space would later achieve some cache as hilariously awful viewing. It’s worth noting that those responsible for dubbing, editing, and re-packaging these cartoons deserve as much blame as the original creators. We really don’t know what the original products looked like, or at least I don’t.

I actually like Diatron-5. Animated Diaclone toys are awesome in my book.

There are exceptions, of course. Robot Taekwon V, Mazinger’s Taekwondo-proficient Korean cousin, was a successful and legitimate effort, if derivative (but imitation is hardly a disqualification for good robot anime).

The associated toys were no different. For many years, Korean robot toys were cheap, garish copies or mutations of Japanese super robots (look no further than our own ‘Korea’ section of reviews) . In the late nineties, however, the landscape changed. When Korean manufacturer Sonokong acquired the licenses for Takara’s Tranformers, Microman, and Brave toys, Korean toys became respectable. I own a few Sonokong pieces, and they are the real deal.

In Sonokong’s wake came Youngtoys, another modern, sophisticated Korean manufacturer. Youngtoys dabbled, as did Sonokong, with re-creating Japanese toys, but has extended its reach into domestic properties. Which brings us to Tobot.

Tobot is a Korean CGI show squarely targeted towards the kiddies. There’s not a ton of English Language resources describing the show, but If this one article is any indication, Tobot is currently very popular. Tobot toys have been leaking out of Korea for a couple years now. I decided to check one out.

Triton is packaged in a giant, expensive-to-ship-from-Korea window box. Like the show, this toy is a product for kids, which is refreshing. Everything here is bright, basic, sturdy. 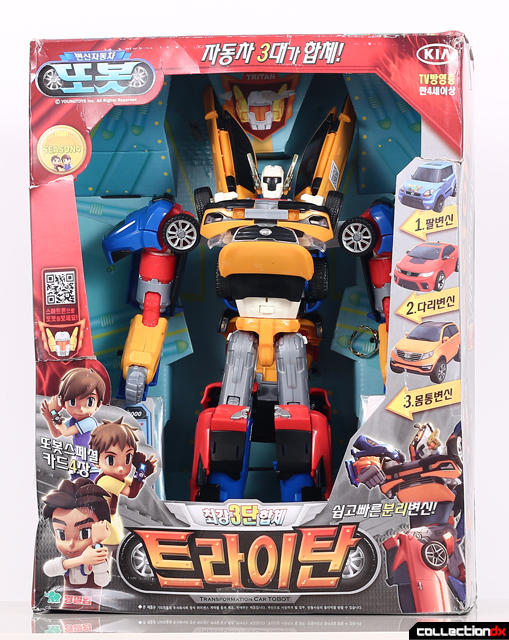 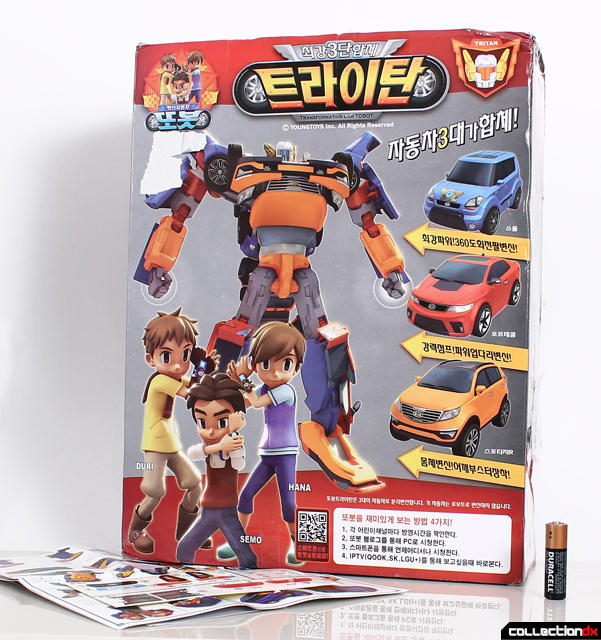 Tobot comes with a big, colorful instruction sheet, a couple of cards, a small sheet of decals (not applied for this review) and nothing else in the way of accessories.

I like to start with the vehicle modes, so I’ve disassembled Triton into his constituent elements. Triton is a combiner utilizing three cartoony, shiny Kias. The vehicles only transform into Triton components.

The blue Kia Soul will become Triton’s arms and back. The auto mode, like all three, is very basic, very toylike. It rolls. It’s durable. It’s fun. The panels are gappy as hell, but I don’t mind. 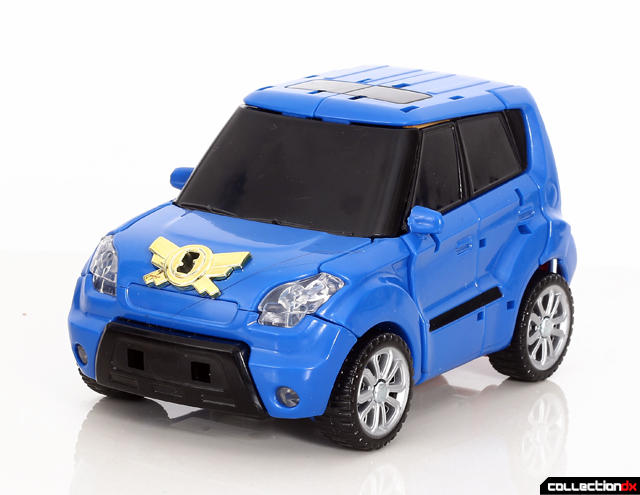 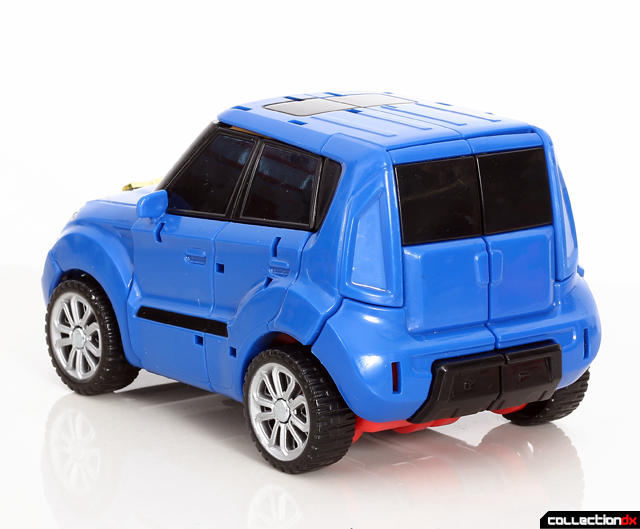 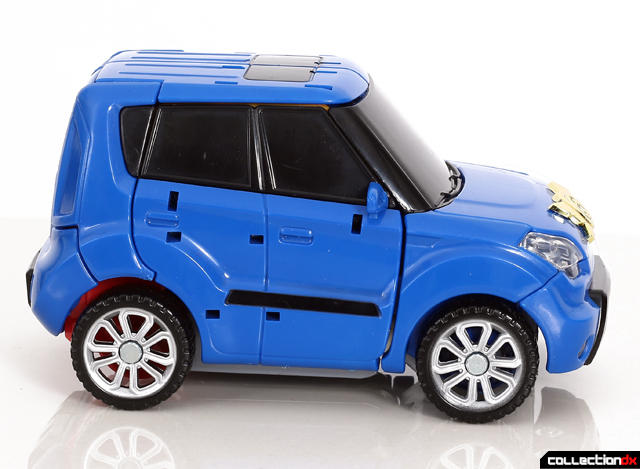 To transform, you separate and unfold the rear halves thusly. 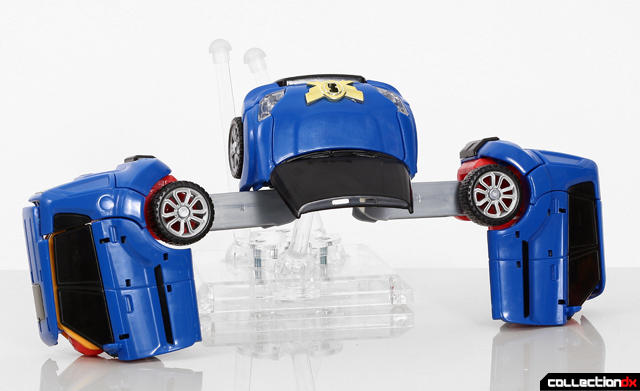 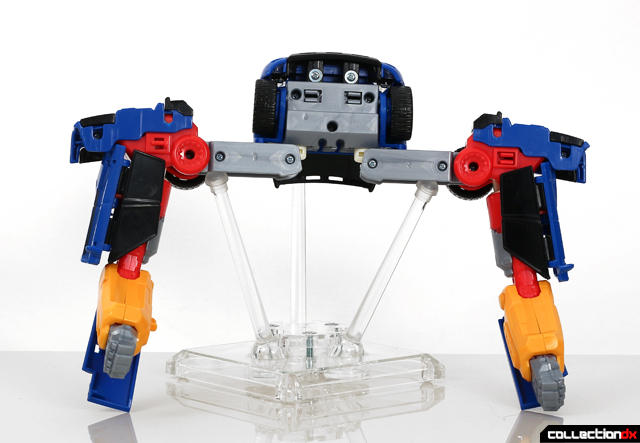 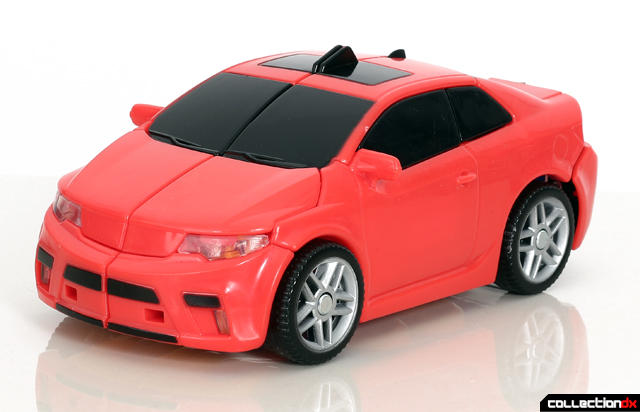 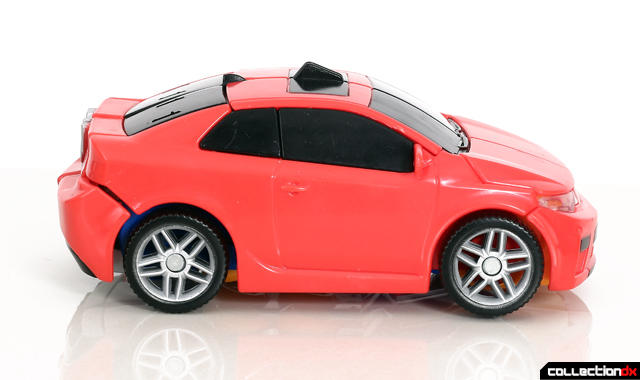 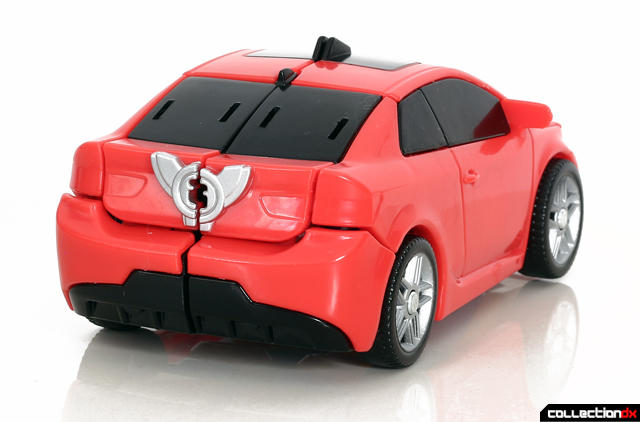 You separate the halves and unfold. 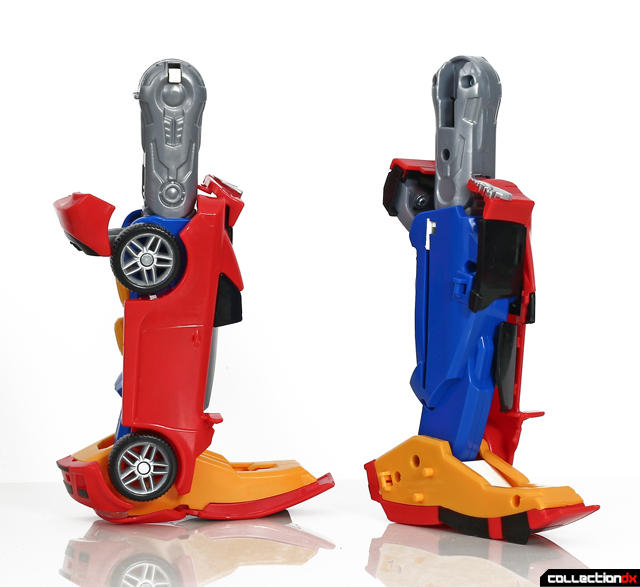 The Yellow Kia Sportage will become Triton’s head and torso. 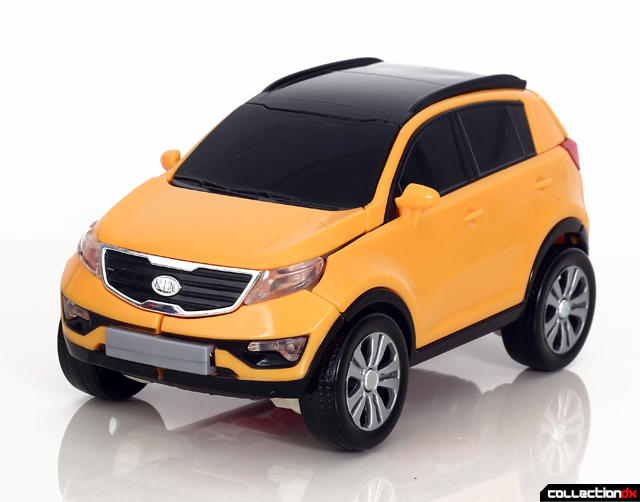 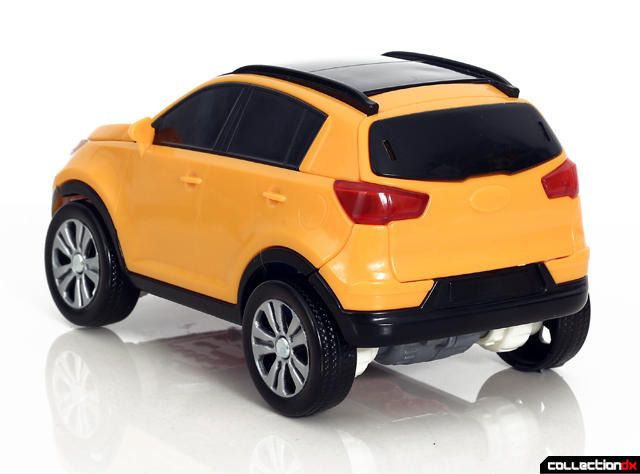 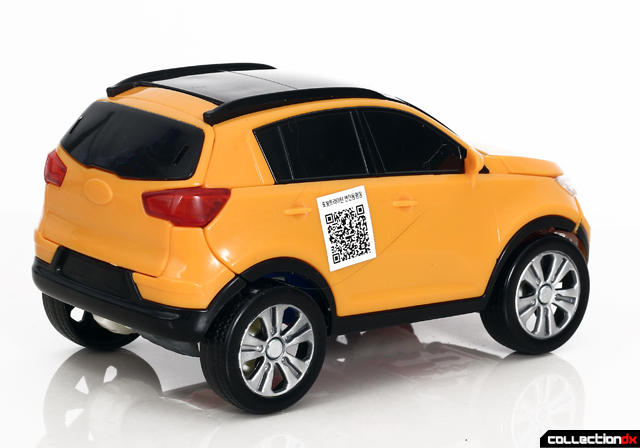 The transformation for this piece is a little more involved. 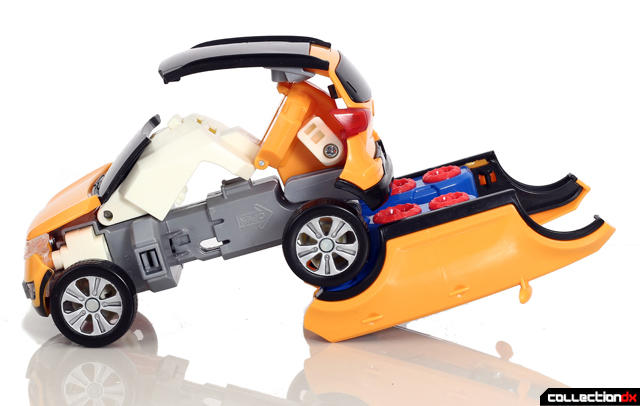 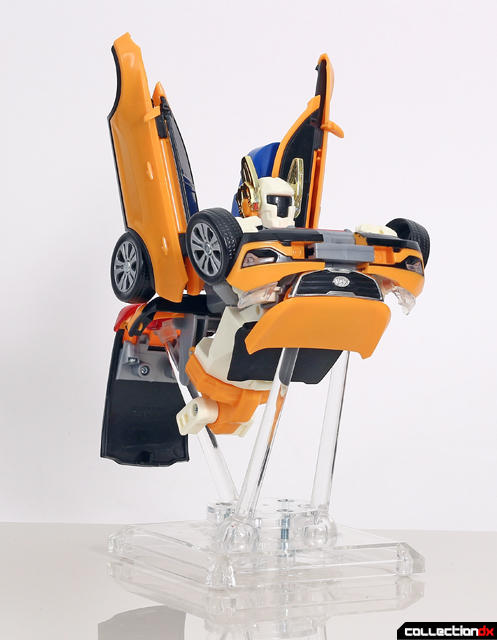 All of the pieces unfold in a very solid, clicky, fashion. Everything feels bulletproof. Nothing is finicky or delicate. A kid would have a hard time breaking this. The closest American analog for feel and build quality would probably be those toddler-oriented Transformers Rescue Bots, though Triton’s a more intricate toy.

Assembling Triton is a breeze and a snap. You are left with a grounded, lovely bot. 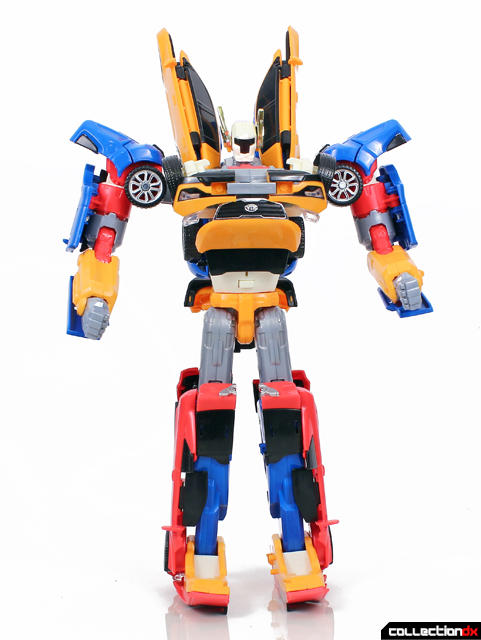 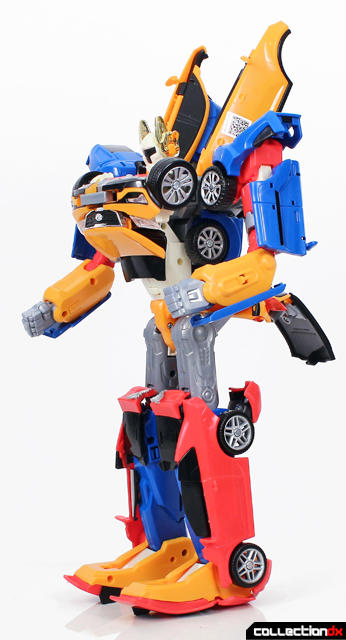 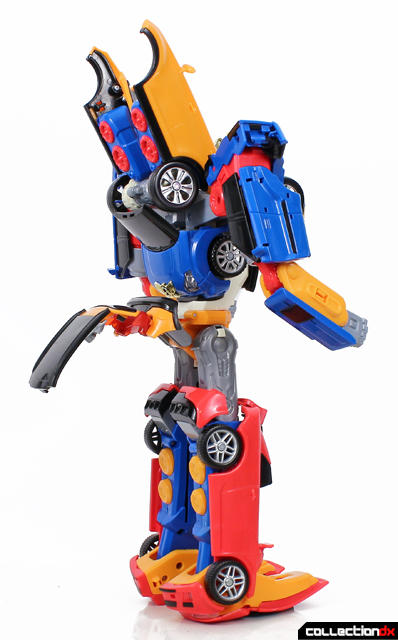 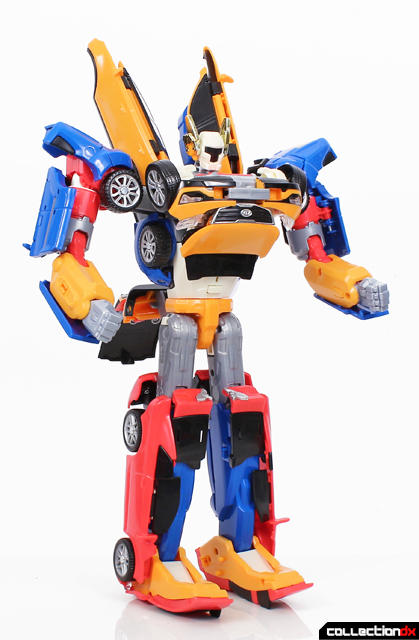 Again, all the joints are clicky and strong. Drop him, love him, bend him, he’s fine.

Triton’s proportions are a touch too lanky, but hold together well. He reminds me of the RID Optimus (the big fire truck), with a combination of soft organic limbs with harder-edged mechanical armor.

The only slop in the design is that ugly bit of windshield hanging off his back. 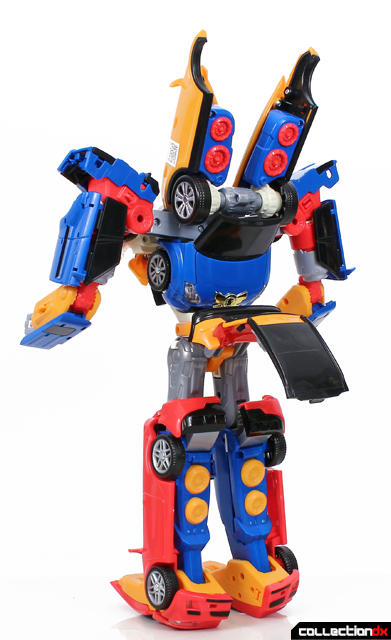 I’m not super wild about the wings, but they work well enough and you can rotate them back. 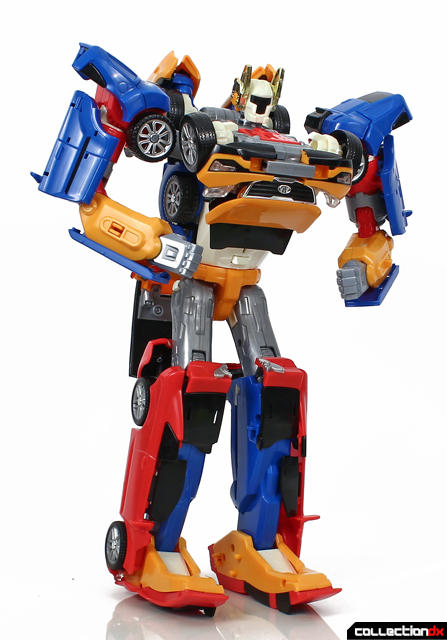 Articulation isn’t unusually great. The legs are very limited in their spread. The shoulders do not rotate forward and back, only outward. 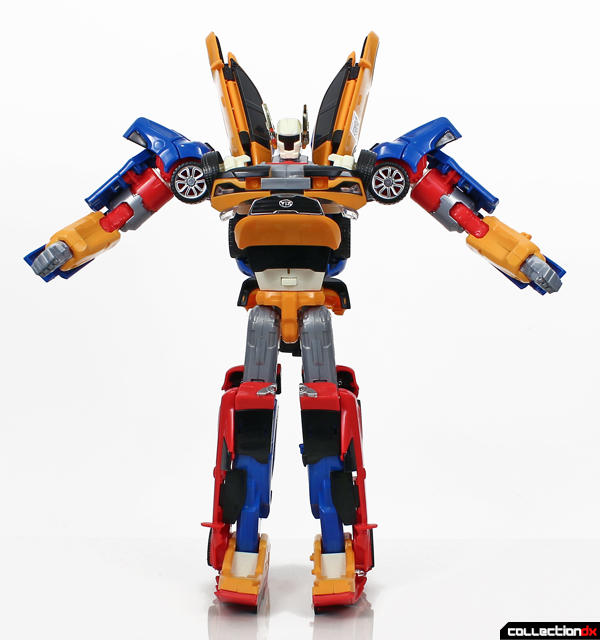 Knees are well articulated but he can’t stand up very well once you start manipulating them. 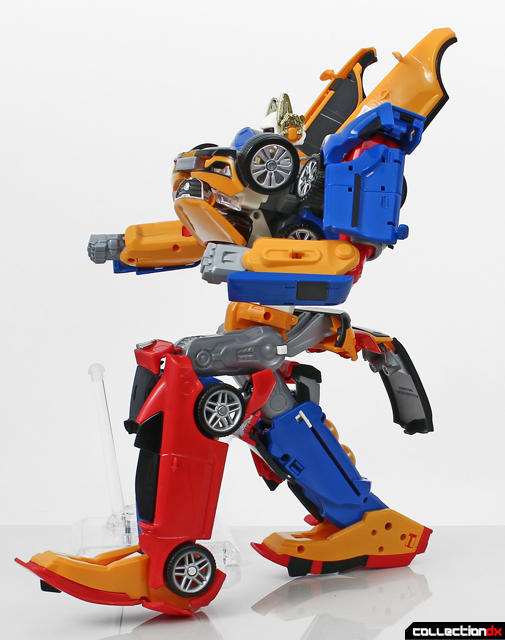 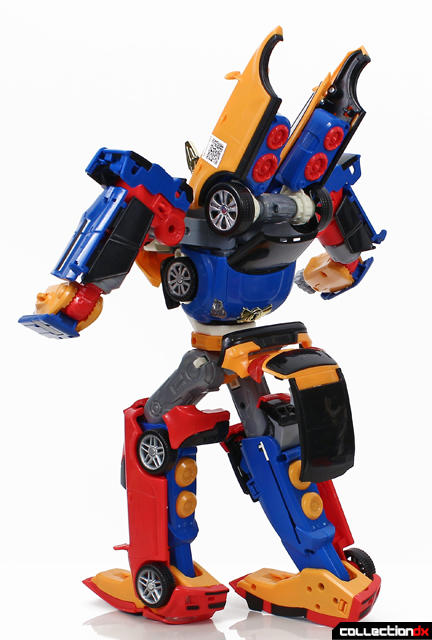 A striking figure, though. I like its unassuming presence and charm. 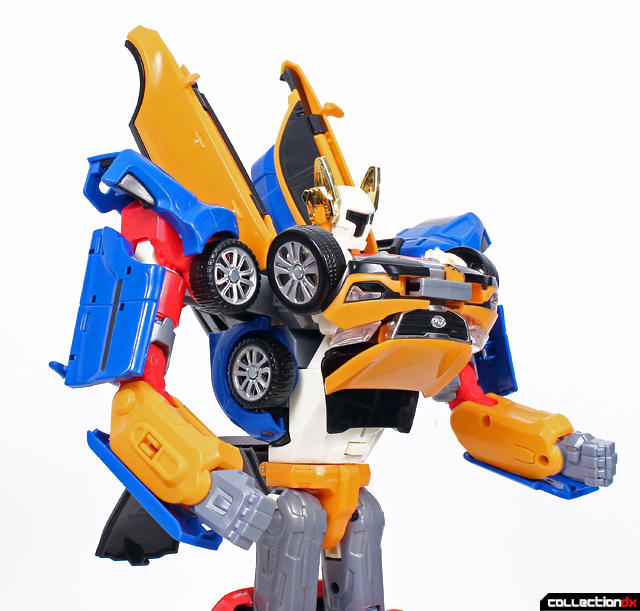 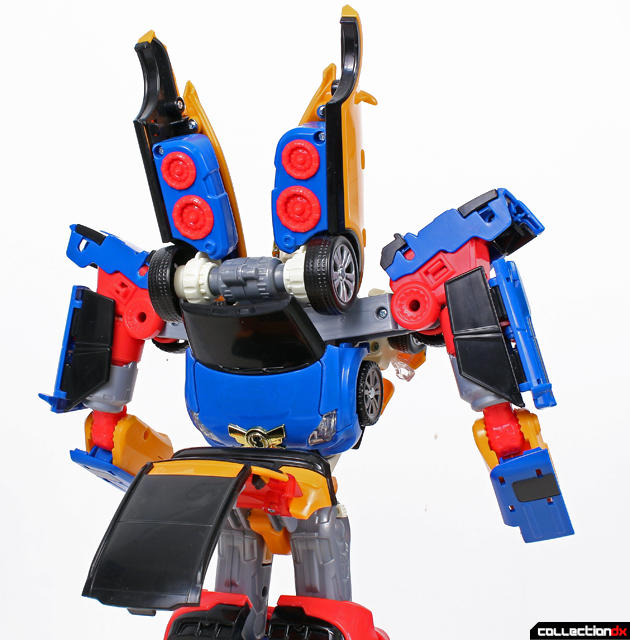 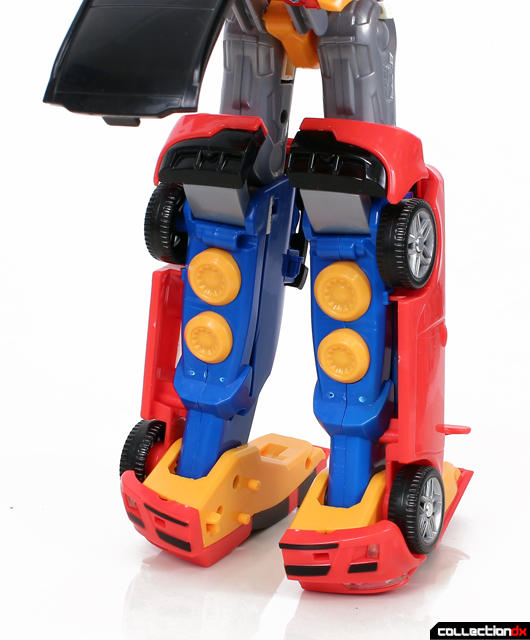 This toy is, above all, competent. It’s not high art, but it works and it’s assured and it’s honest. If this is any indication of Korea’s future as a toy producer, I’m heartened. I’ll probably pick up more Tobot offerings. 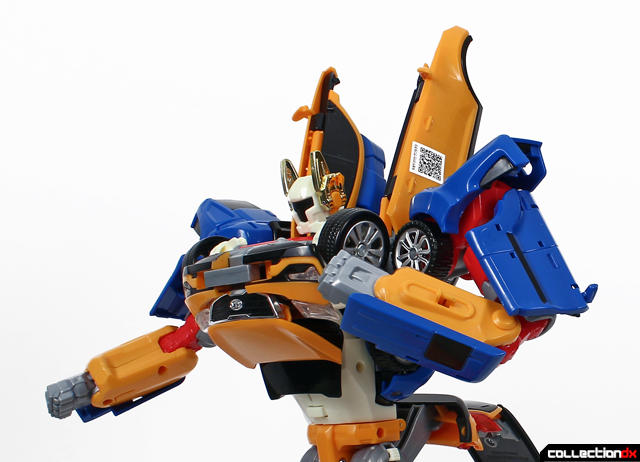 4 comments posted
Been waiting for some reviews

Been waiting for some reviews of the Tobot robots ever since I got a couple of them last year. I have the firetruck (Tobot R) and the green one that turns into a SD Kia Rio (Tobot D). Both fine toys and I'm real temped to buy a few others.

Cool looking bots, a triple car combiner that has very little kibble because it's only one robot? Very impressive!

I have some of the Korean Microman Magnemo line, and I must say they have nothing to envy their japanese counterparts. Glad Korea is starting to stand on their own products. I remember a nineties Korean anime called Rescue Force Restoll, which I think aired also in Japan, and it was quite cool, the opening song quite catchy,
I really hope they keep rising their quality.

I love the split-apart, upside down car grille for a chest, but it's almost a little too "techy" to match with the more cartoony arms and legs. The cars are the same way - the Soul is flattened into almost Choro-Q proportions, while the Sportage is more realistic than the other two. I'd definitely like to see more toys from these designers and engineers, though. There's a lot going on here and it's getting close to something really unique and impressive.