As I become disillusioned with modern Transformers designs I tend to look to other sources for my transforming toy needs. One relatively untapped market is Korea. We all know about the crazy bootlegs of years past, but modern-day Korea is producing some fantastic toys that are a fresh take on the genre.

Enter TOBOT, a Korean CG cartoon. It's one of the most popular kids shows in Korea, and in 2014 the master toy licensee Young Toys set up at the New York Toy Fair to see if there was any interest in the states to continue the phenomenon here. I don't know what kind of success they had with buyers, but the toys captured my imagination right away.

Lets get one thing straight: TOBOT is a kids show. The toys are kids toys. But unlike the kid-friendly robot toys in the states, these don't suck. The toys in the TOBOT line are high-quality, sturdy, but most of all have great designs that are not patronizing. There's no goofy-kid safe design here, with googly eyes and smiling faces. These are serious looking robots.

The biggest in the line is the Tobot Quatran - a combiner comprising of four distinct vehicles.

The box is huge and bright with a large window showcasing the toy. As there are no electronics, there is no "try-me" feature. 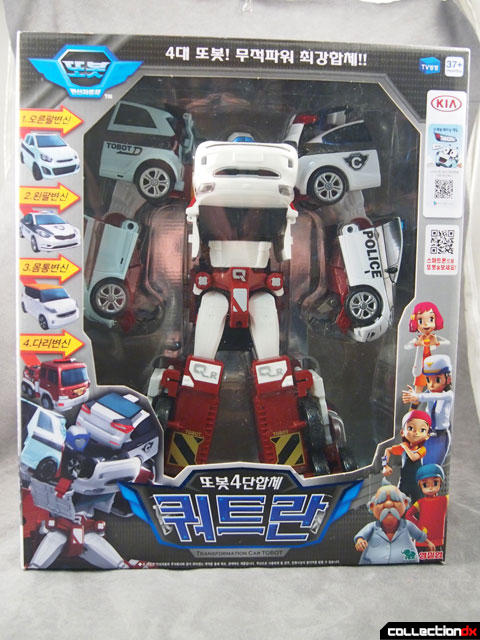 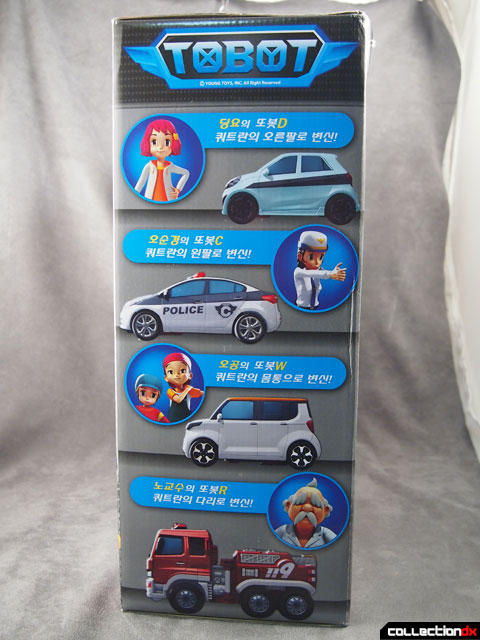 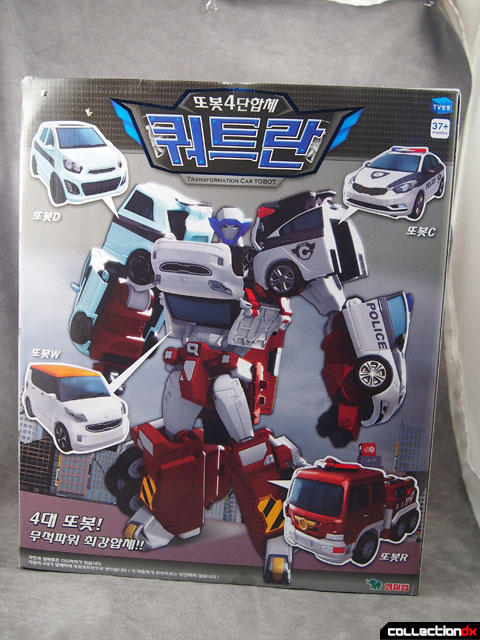 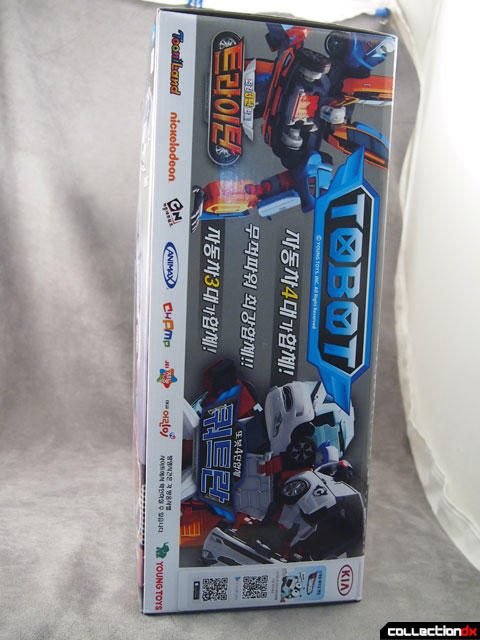 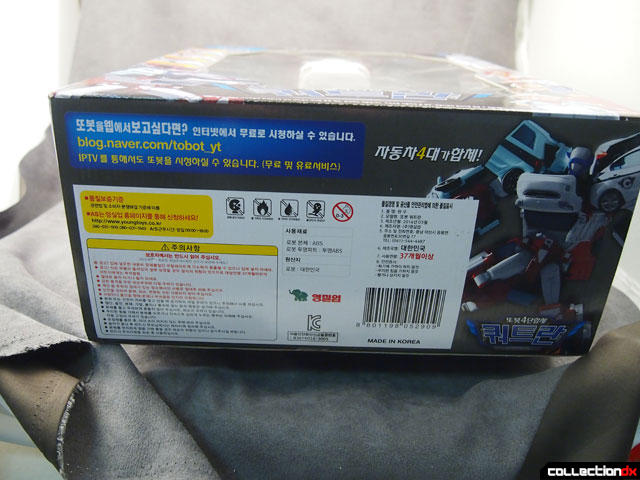 Assembled the toy is huge, about 18" tall. 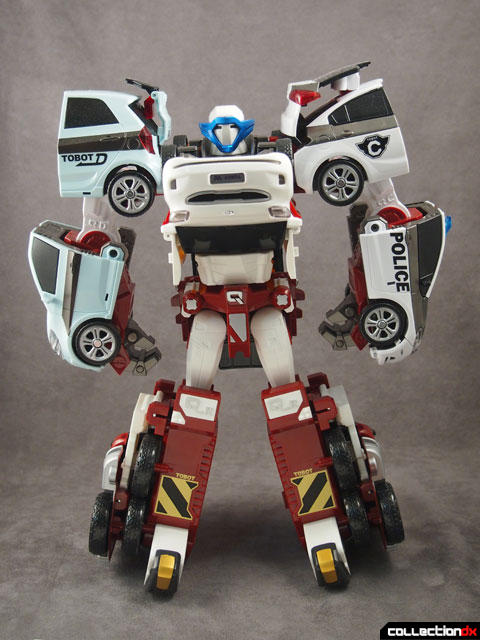 But before we cover the robot, lets look at the components. 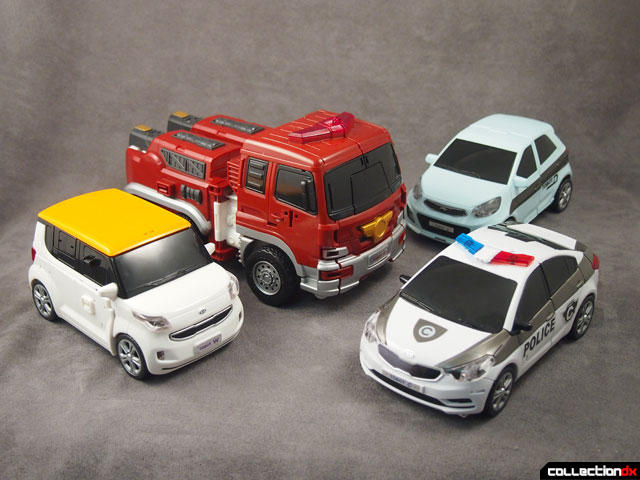 Each vehicle can transform into a component of the larger robot, but they do not have individual robot modes. However there are other, larger toys of each vehicle that DO have distinct robot modes. They just don't in this iteration.

First up is Tobot W which is based off of the Kia Ray. All of the vehicles are based off of licensed Kia vehicles. Each comes with a sticker for the Kia badge and license plate. 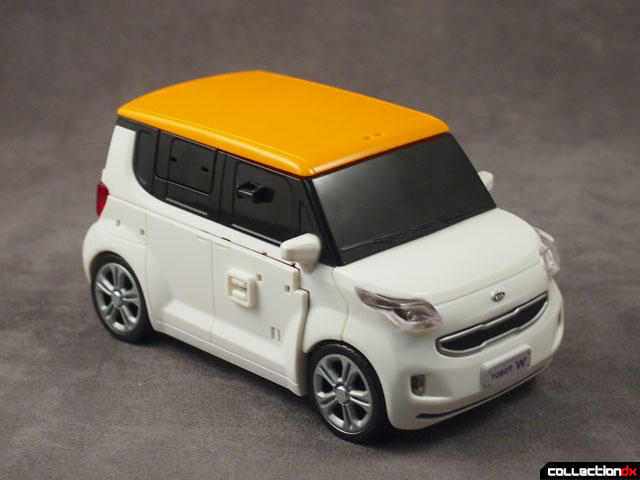 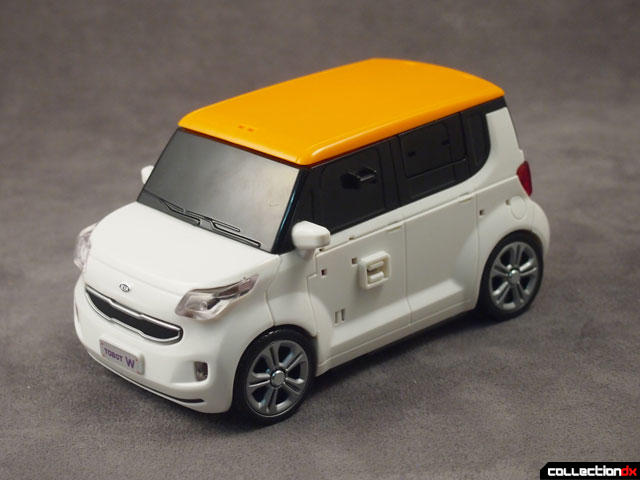 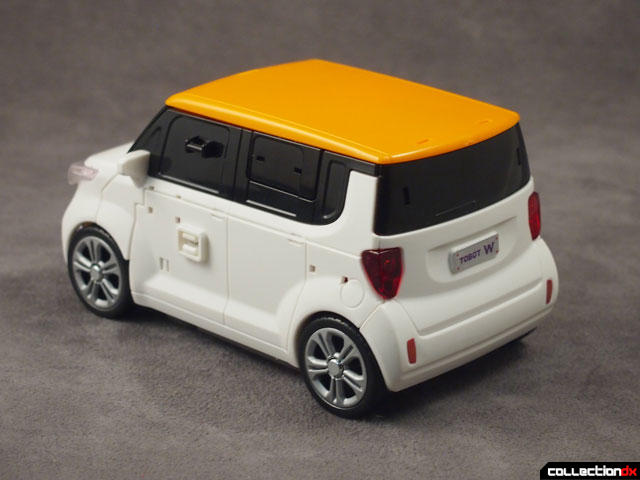 The wheels roll, but that's about it. There's no action features to break, and the toy is self-contained. It will survive years in the toy box. It's worth noting that this is a different color scheme from Tobot W who has also appeared in white/purple and orange/blue

Tobot D is a Kia Picanto. It's tiny, 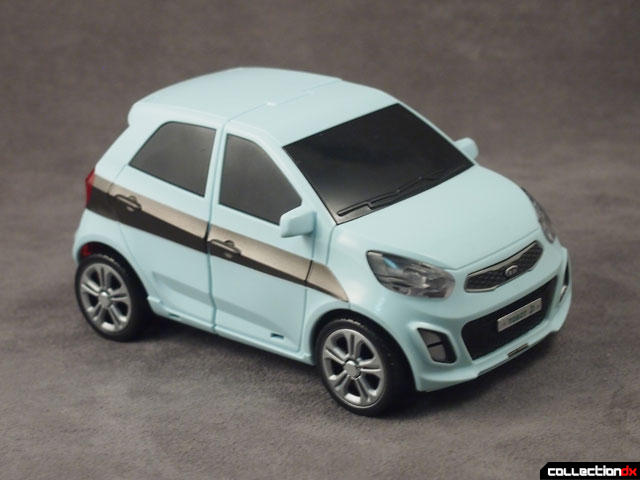 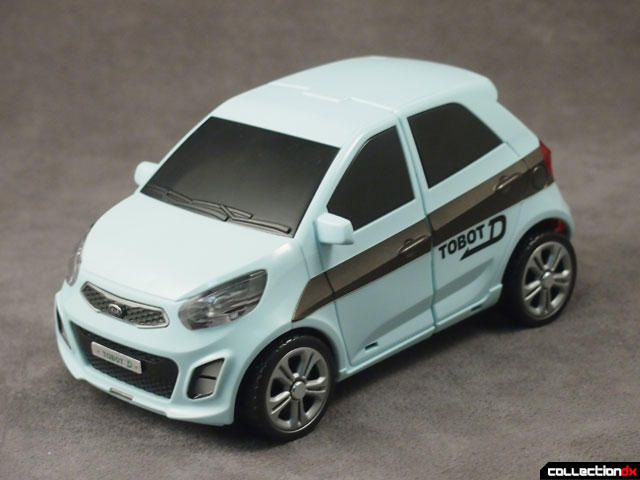 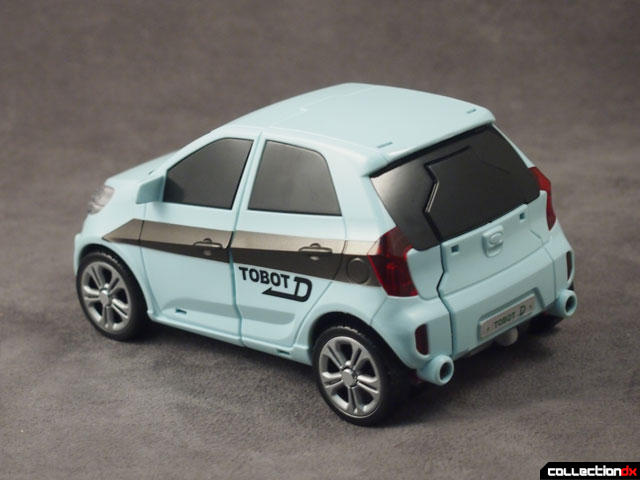 It only has the Tobot D branding on one side.

Tobot C is a Kia Ceranto, decked out like a police vehicle. This vehicle came with stickers to have the police wording and logo on both sides. It would have been cool if the lights flashed, but they do not. 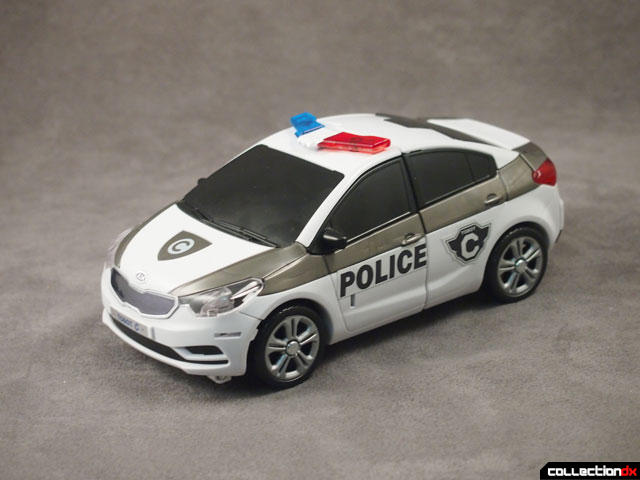 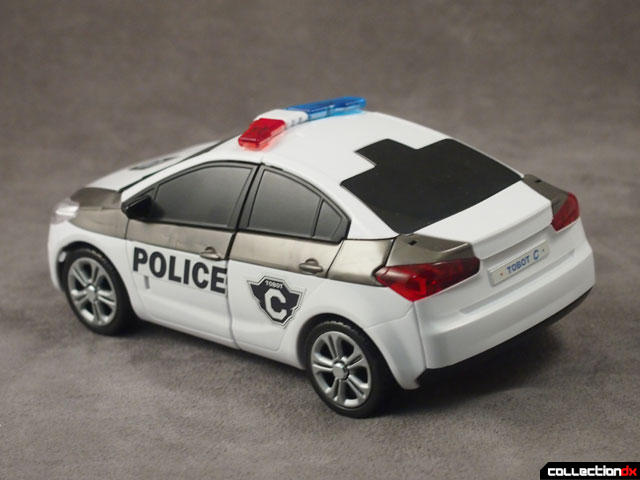 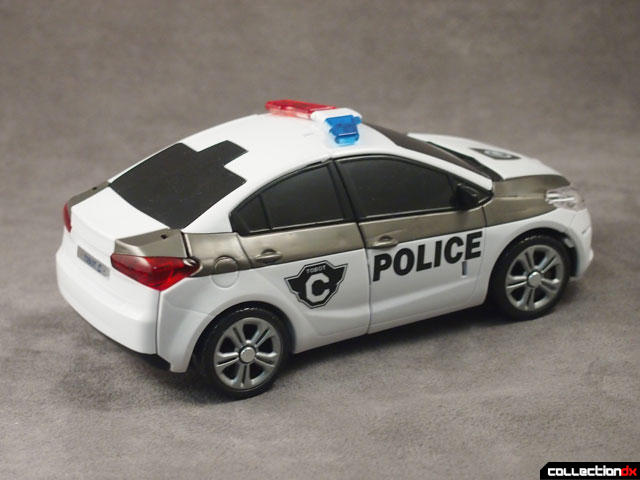 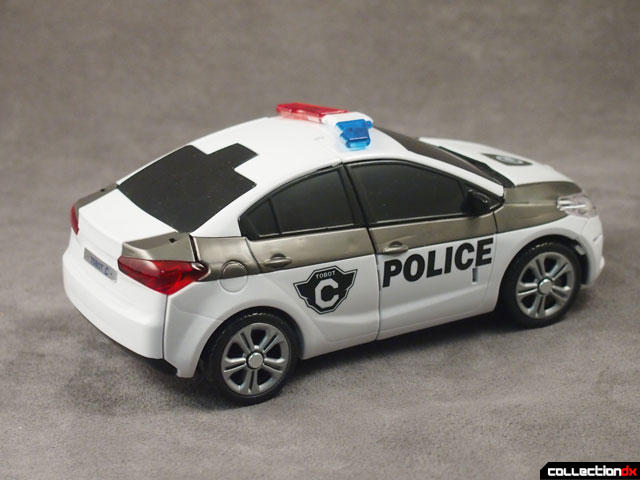 Finally you get Tobot R, who is loosely modeled after the Kia Rhino. It's a large rescue vehicle with "119", which is the South Korean emergency rescue number. There's great detail with even the character's name molded onto the wheels. 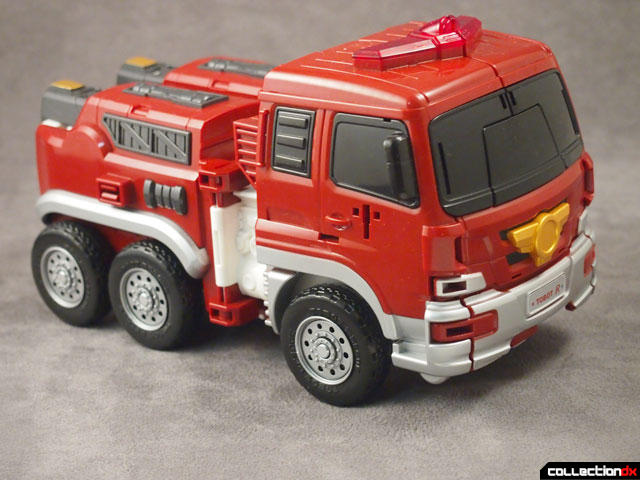 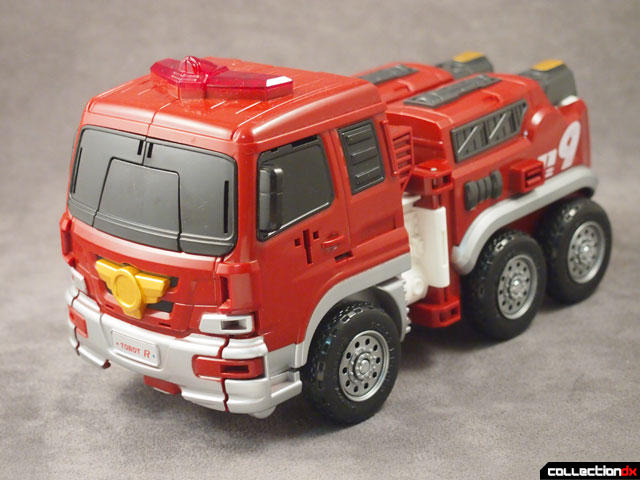 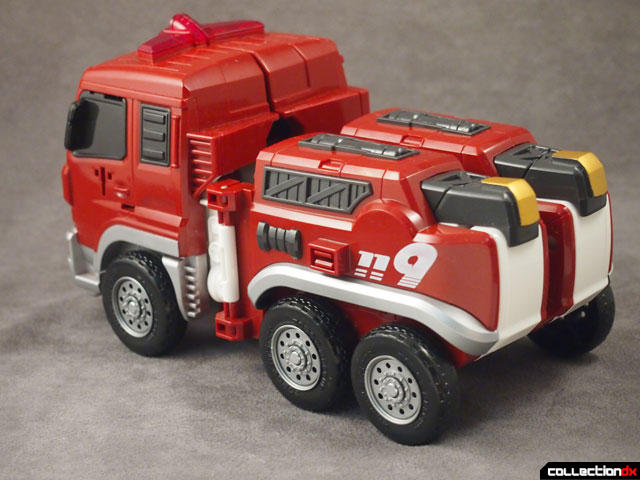 Each vehicle on its own is unremarkable aside from the astounding construction. They are pretty standard kid toy vehicles. But it's during the assembly that the genius comes out.

You start with Tobot R. The side panels swing out and click into the lower legs with bar connectors. There are connection points everywhere for all the panels, so nothing is loose during the process. Flip out the toes, split the legs, and swing the front truck panel to the back. 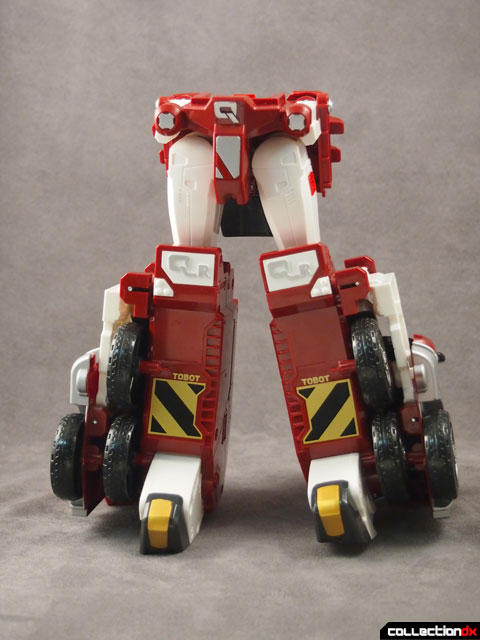 Tobot W gets flipped upside down to from the chest and head. Pry the orange roof out and swing back, then fold down the white connector. There's a small lever that pushes a panel back to make the roof stay into position. On the bottom of the car, you see a panel with an X and O and an arrow. Press in the direction of the arrow to rotate the panel and reveal the head. With the head halfway revealed, reach in and press out the orange side panels for the arm connectors. Slide this whole unit into the clip on the top of Tobot R. 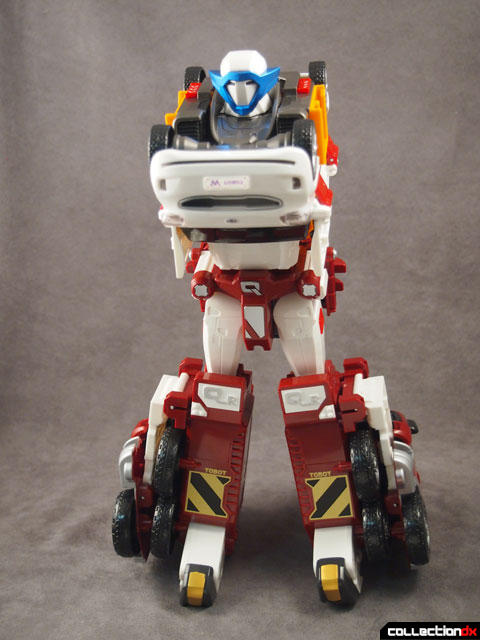 Underneath the crotch of Tobot R is a red lever that releases this part during disassembly. Another nice engineering feature.

Both Tobot C and D transform identically. Lift up the rear hatch and bend the car at it's middle seam. Swing out the arm connector from under the hatch, and then lift up the front of the car and swing out the hands. Each joint is a phenomenal dentented joint.

Slide the arm connectors into the orange panels on Tobot W. There are nice red panels that pull back to remove the arms when taking it apart.

Combined, the thing is massive. 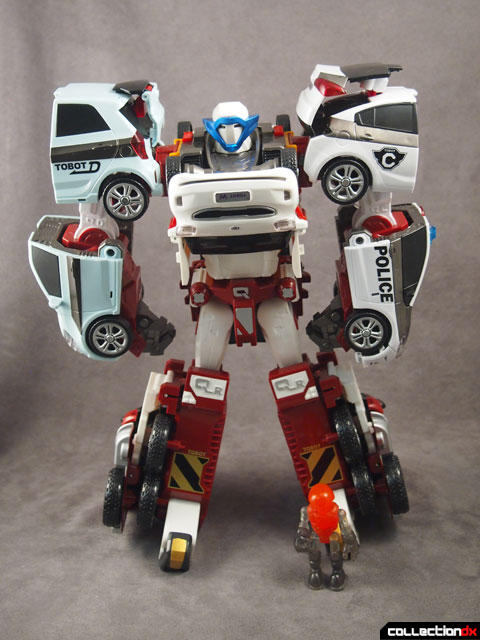 The color scheme of Tobot Quatran is beautiful. The whole thing just looks awesome, even from the back. 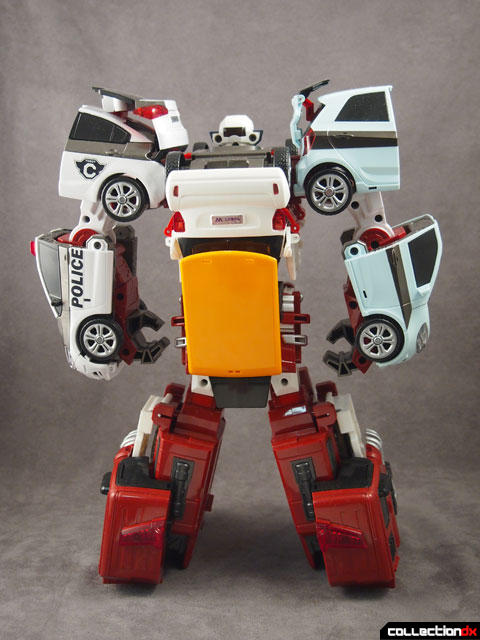 Articulation is limited. The arms rotate, the elbows bend in, the wrists bend in, the legs bend out and the knees bend. But this is pretty much the best pose. 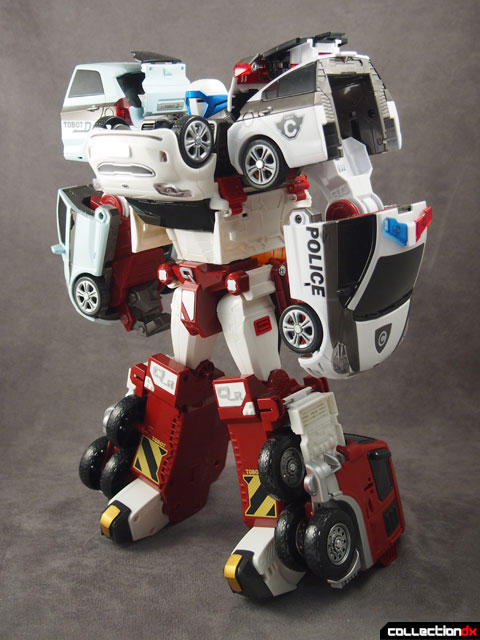 Keep in mind, this is a kids toy. It states on the package that it is recommended for ages 37 months and up. (Such an arbitrary number!) It's hard to show with words how sturdy and well made this is. I know kids toys are supposed to be sturdy for safety reasons, but this toy manages to be both sturdy and well designed, both mechanically and aesthetically. 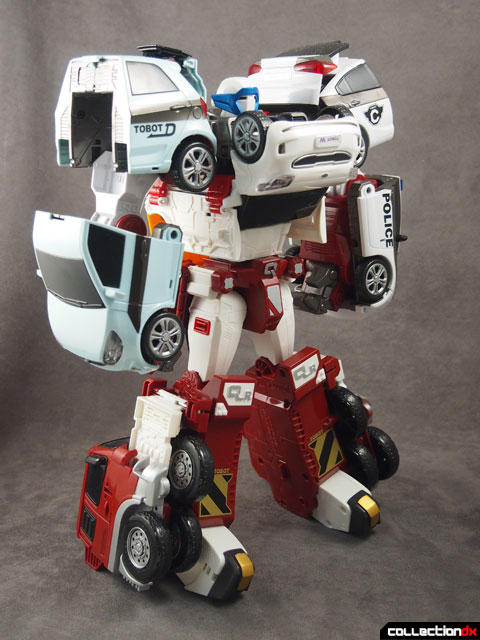 As this toy is not offered domestically, you have to import it or stumble across a Korean market such as H-Mart to find one. And this coolness comes with a cost. This cost me about $100 USD and then also expect to pay shipping from Korea. However it us such a unique, fun piece I think it is worth it.

My quest for other TOBOT toys is on!

Looks cool, reminds me of an update to Puzzler. I wonder what happened to Transformers combiners. Its like they totally forgot how to make a decent combiner. Something like this is what they need to do.

Admittedly each component would need to have a robot or other transformation mode to really get the Brave spirit, but for kids, I can dig it.

The 37 months isn't exactly arbitrary, though--that's just a fancy way of saying "3 and up". Or as Ashens would call it, three sad onions.

Seriously, this is one heck of a good looking toy. I hate how all the US robot toys look like the Crayola factory exploded on them. Have you seen the new DInobot toys for the next movie? Hideous. *This* is pretty darn cool though.

Head reminds me of the Galaxy Mega/Astro Megazord.

This combiner is such a breath of fresh air! Josh, you are spot on about your sentiments. It's what other combiners, let alone transforming robots, could be in terms of aesthetic, build quality and elegant simplicity. Other toys in this range are having an ever difficult time scratching the itch. I can see this toy emitting a fantastic aura on the shelf and having great playability for adult collector and child alike.

Looks better than FOC Bruticus and any of the PCC combiners. Its nice to see a company do something original.