Senki Zesshō Symphogear is an anime series that basically came out of nowhere and immediately garnered a strong and supportive fan base. The show follows a group of girls who henshin into powerful superheroes to do battle with mysterious creatures called the "Noise," that attack seemingly at random and cause normal human beings to disintegrate with a mere touch. Hibiki Tachibana finds herself suddenly thrust into this war when she is saved from a Noise outbreak by a Symphogear user named Kanade. The ferocity of the battle led to Kanade's demise but her brilliant last gasp caused fragments of her armor to enter Hibiki's heart. This twist of fate allows the young girl to transform into the invincible Iron Woma- er... I mean to use the Gugnir Relic and become a Symphogear user. 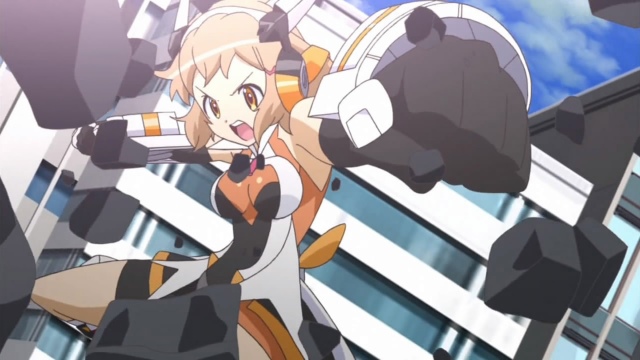 Hibiki doing what she does best: punching stuff!

I think a lot of Symphogear's success comes from Hibiki herself as she perfectly encapsulates the overall feel of the show. She's energetic and not too bright but possesses a kind of ingenuity and charisma that is incredibly infectious. Her brutal, no-nonsense fighting style and hot blooded screaming make her the perfect main character for a show all about battling evil monsters for justice! Naturally this kind of series received a few action figures with Hibiki being the first to get her very own Figma. 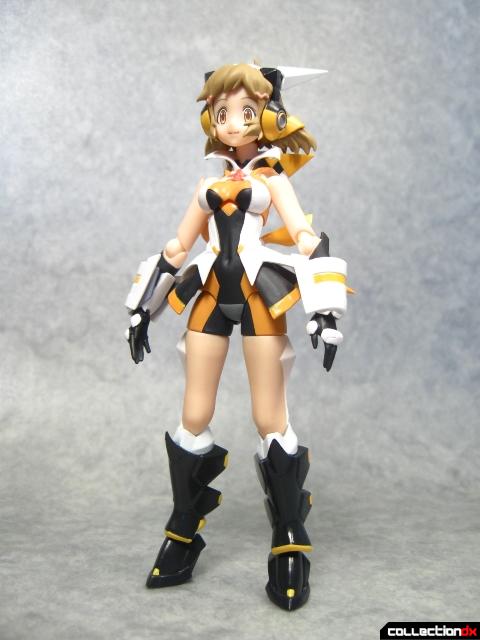 Hibiki in her Gungnir armor makes for a great looking figure. Her slight frame belies a rather ambitiously designed toy. She has the typical Figma construction of a PVC body with hard ABS joints and some other hard plastic pieces for detailing. From the tip of her headgear to the bottom of her boots she stands about five and half inches tall. 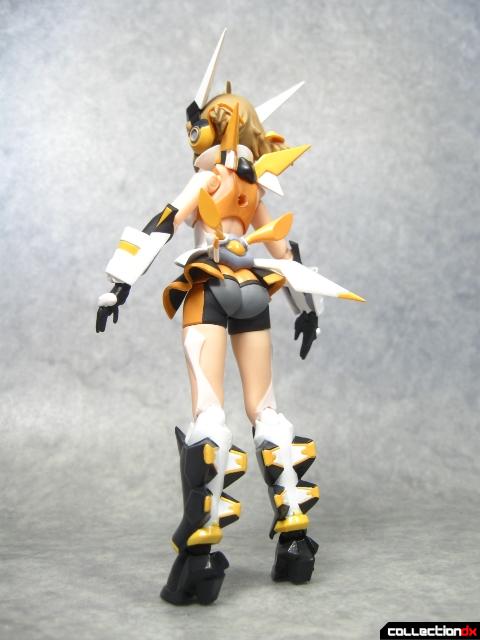 She feels pretty light but that just comes with the territory. All of the bladed protrusions on her armor are literally sharp and can draw blood quite easily. 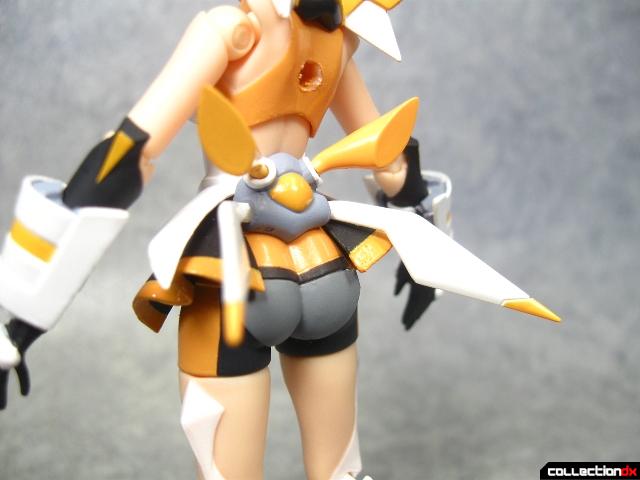 The techno-bow thing on her back is somewhat troublesome because all of the pieces are loosely pegged into her body. The long white parts especially like to fall out if you handle them. 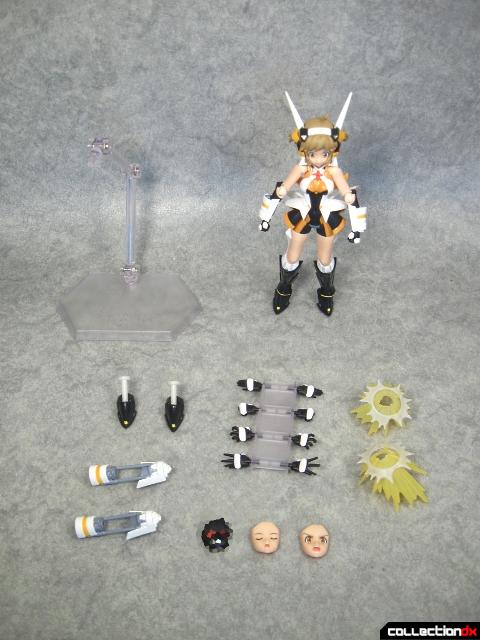 Hibiki comes with a near perfect number of accessories that include a Figma stand, a plethora of optional hands, an extra pair of shoes, extended gauntlets, effects parts, and three extra faces. Also included is the official Figma plastic baggie (not pictured) for storing accessories. 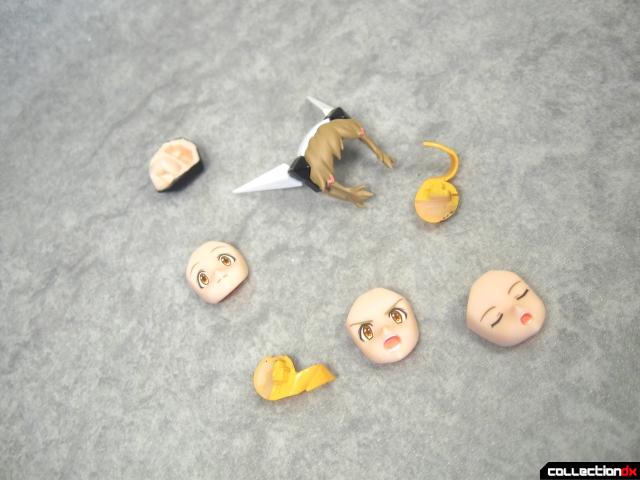 Swapping Hibiki's faces is fairly involved as you have to pop off her fancy headphones before removing the front part of her hair and then changing the face. My main issue with that was how one headphone was stuck tight the first time I tried to swap the faces. I managed to get it dislodged without damaging the figure though. 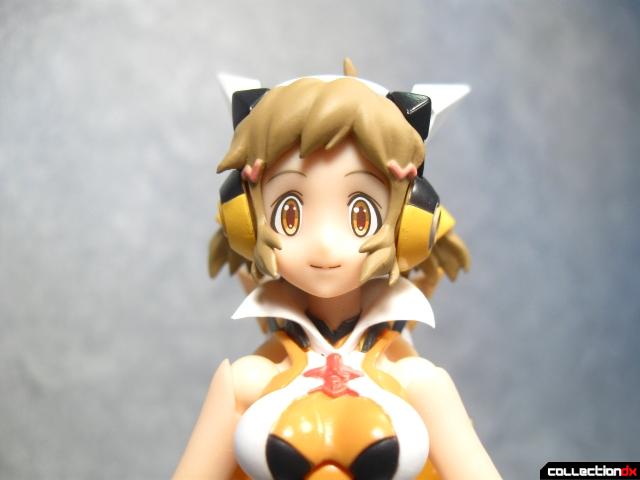 By default Hibiki comes with her happy smiling face installed. It's a pretty spot on likeness to the character. 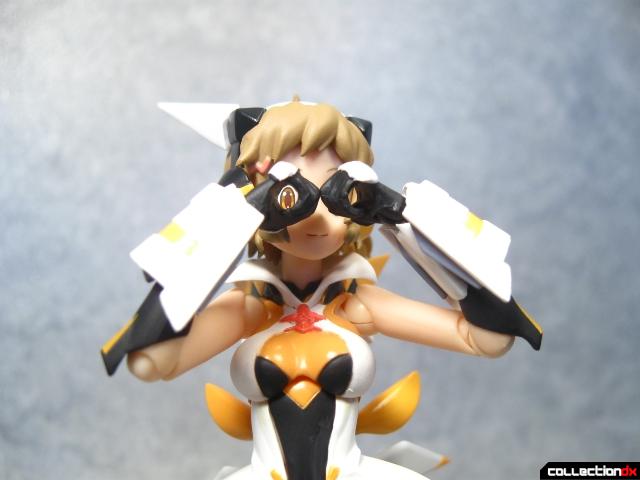 All of Hibiki's different hands peg into her gauntlets and feature a hinge joint for extra articulation. I especially like her binocular hands. She also comes with a pair of fists, a pair of gently outstretched hands, a pair of splayed hands, and a pair of Agito rage hands. 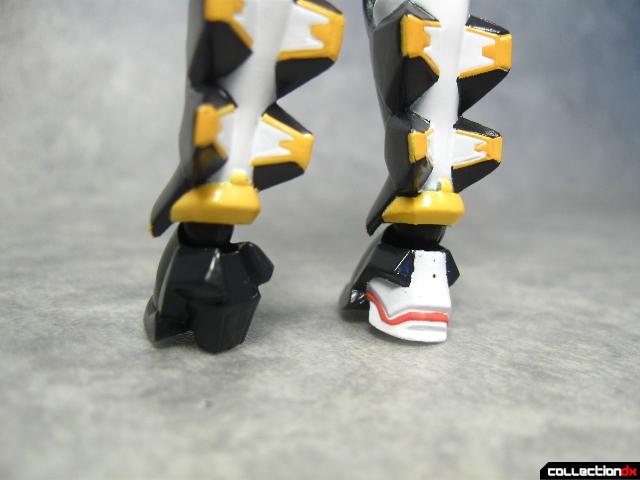 She comes with two pairs of boots. The default pair have the requisite impractical high heels most superheroine costumes tend to possess. Even in the show Hibiki thought these were a bother and kicked off the ends of her magic techno shoes to reveal the back half of her sneakers. Remember that being comfortable in battle is paramount even while wearing silly outfits. Since the sneaker heels naturally let Hibiki stand up better I tend to use them all the time and did so for most of this review. 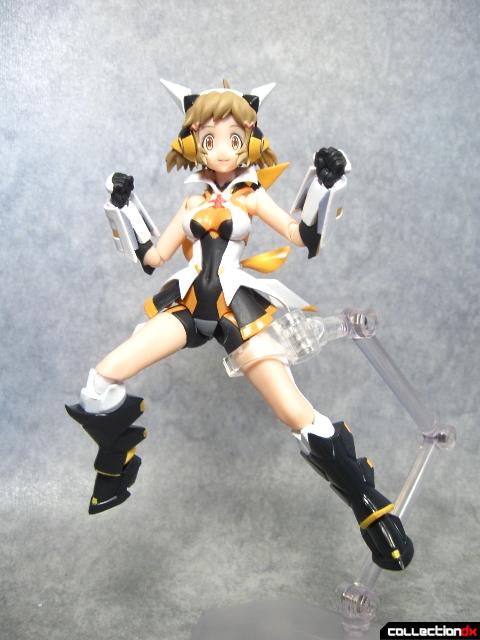 Like all Figmas, Hibiki comes with an articulated display stand that is in theory supposed to plug into the hole on her back. For whatever reason I have recently run into a string of Figmas (from many different years) that all seem to have holes too small to fit the stand. Out of frustration I just used the claw attachment from a Figma Di: Stage since hey that is also an official Max Factory product.

In any case, Hibiki can be placed on a stand and do her post Henshin pose perfectly! All of her joints move quite smoothly and offer a wide range of poses. The only issue is some parts of her costume can interfere with her articulation. Particularly the way her hair knocks against her hang gliding collar. Still, Hibiki is an incredibly photogenic figure so getting her into a cool pose is always worth the effort. 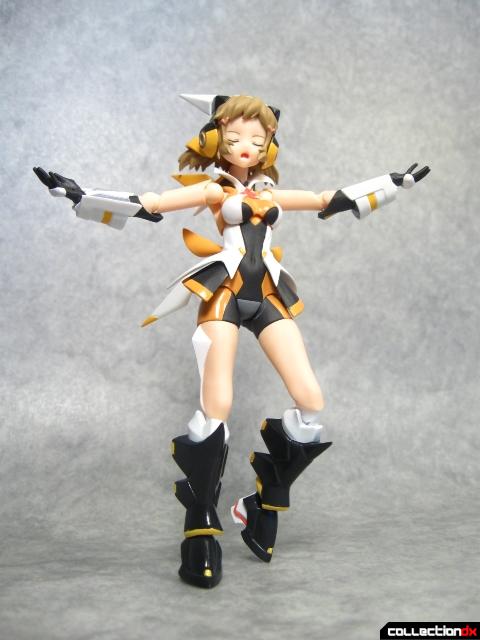 In a somewhat Macross-esque manner, Symphogear users draw power from the songs they sing in battle. However sometimes they need to sing even more and perform their "swan song" to get a huge boost of power at the cost of incredible physical stress. 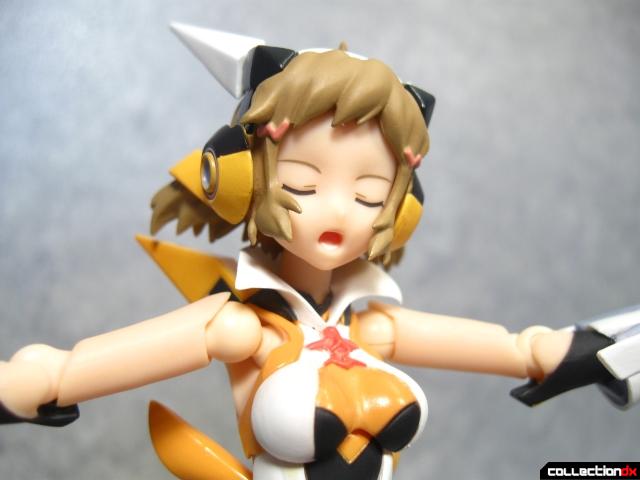 To replicate this, Hibiki comes with a calm singing face accessory. This is for the few times her voice is angelic and not part of a screechy Celtic style pop song. 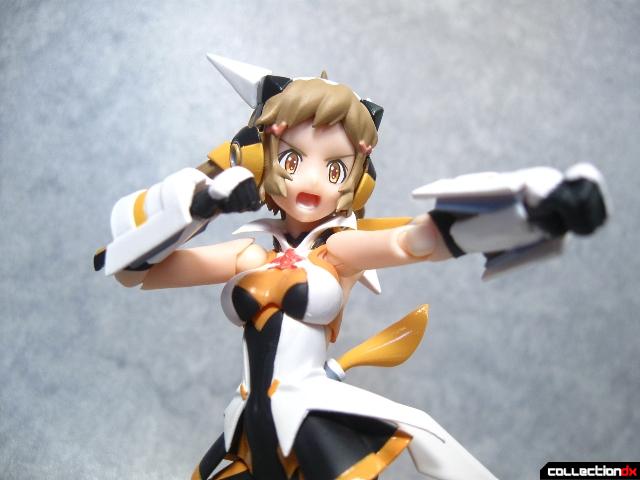 Hibiki's battle face is one of the highlights of the set. Again this figure just looks perfect and really captures the spirit of the character. She's got her fists of fury and is ready to lay the smackdown on some villains. 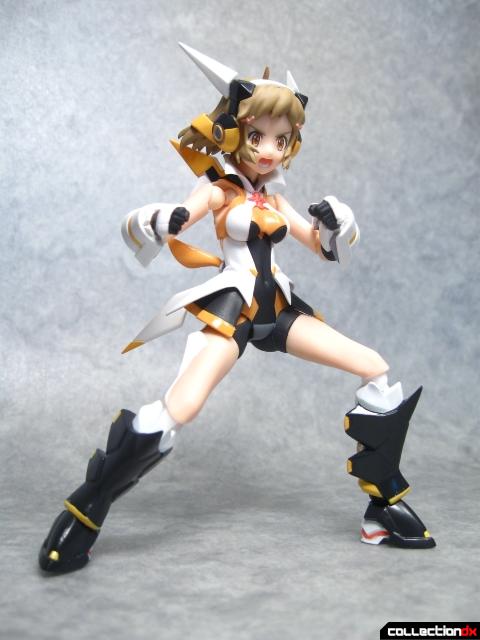 You don't mess with The Bikkie! 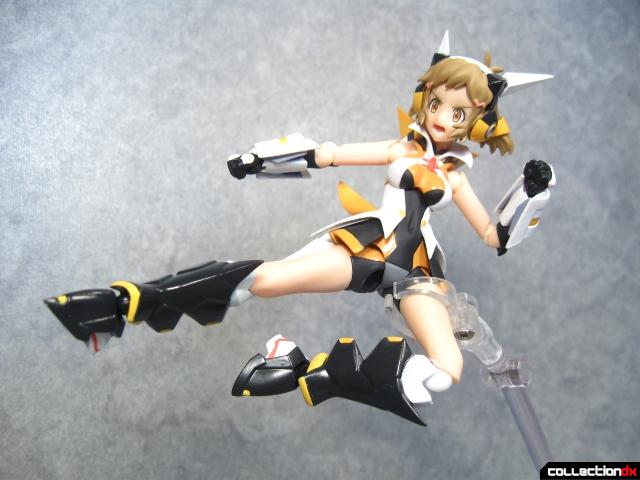 She will jump kick yo' ass, Bruce Lee style! 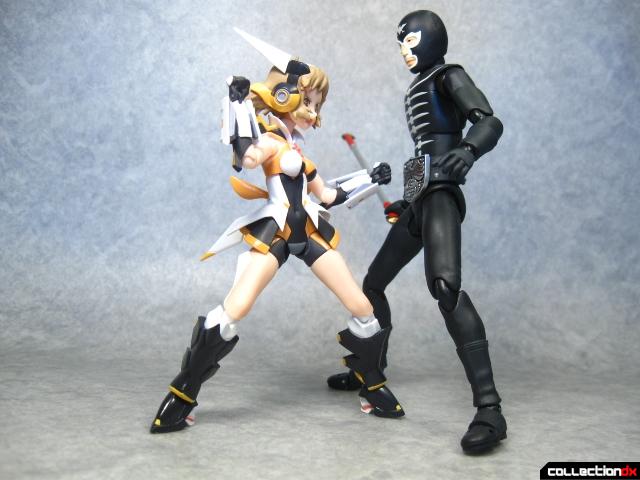 Speaking of legendary martial artists, Hibiki was trained on how to fight using only the finest kung-fu films! She knows all the best techniques such as the unbeatable One-Inch Punch! 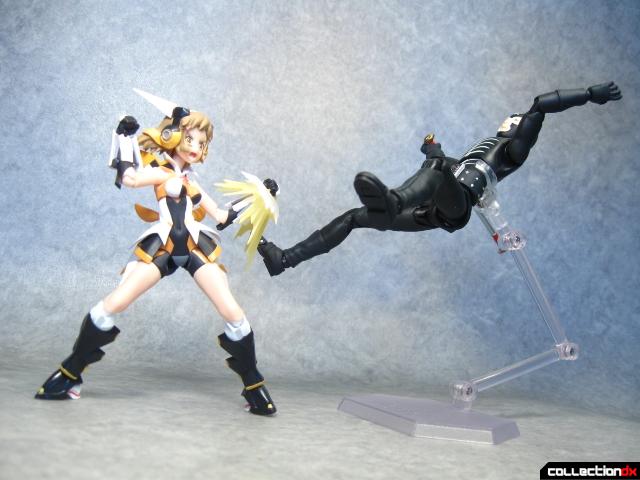 To accentuate her punches, Hibiki comes with a pair of effects parts that slide over her fists. The right side part didn't fit quite as well so I just sandwiched it between her hand and her gauntlet. The other one works fine though. 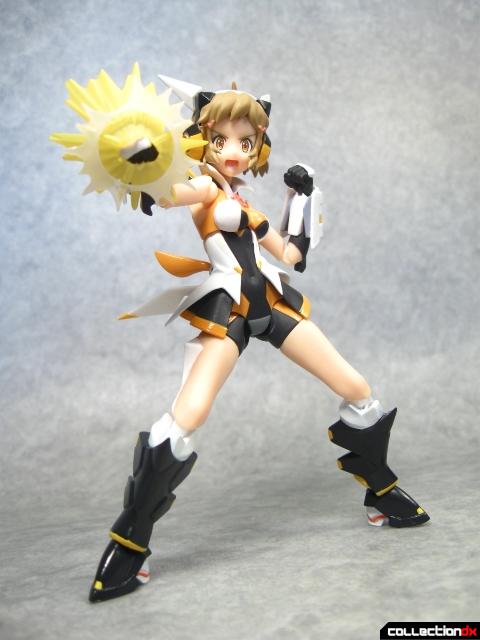 Hibiki lacks the ability to summon a weapon (Armed Gear) like her companions but she makes up for with sheer strength. Her fighting style focuses on short controlled bursts of power channeled into one striking point. 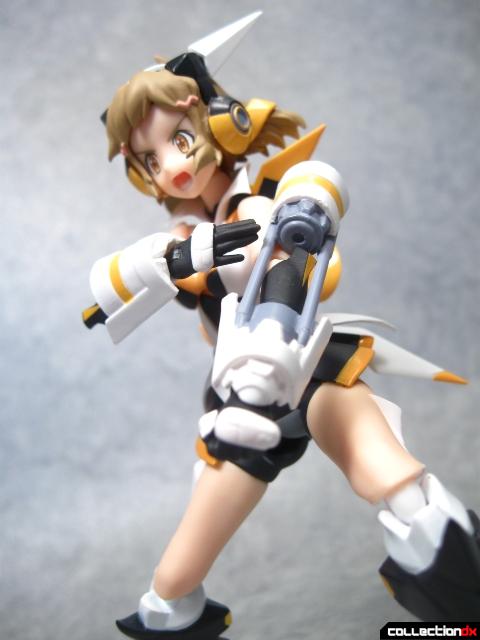 When she needs some extra punch, Hibiki draws back the ends of her gauntlets like the firing pin on a cannon. To do this on the figure you simple replace the entire white tech armor piece with the extended version. These separate from the black parts of her forearms. Getting the extended gauntlets onto her arms can be tricky as the elongated ends make it harder to plug her forearms into the new parts. 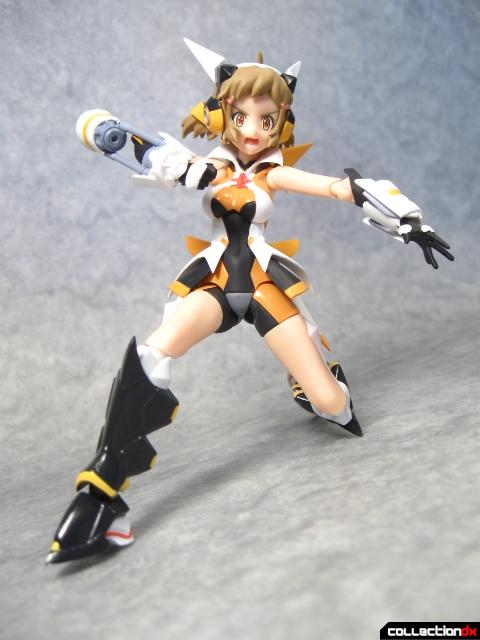 Again once you get everything working Hibiki looks great with her armor enhanced body ready to deliver another punishing blow. 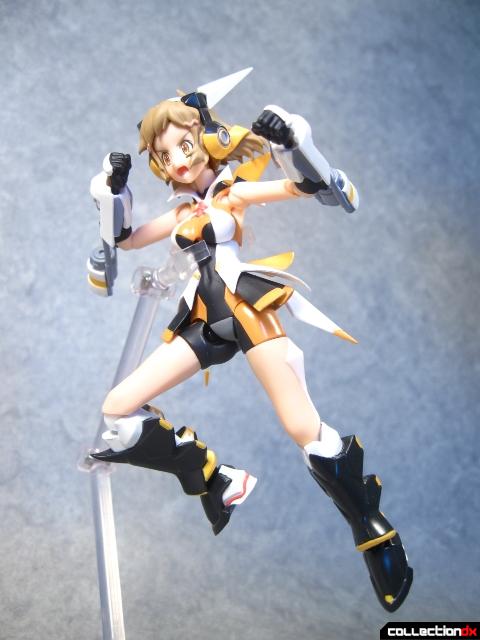 You get two extended gauntlets for double the piston powered impacts. 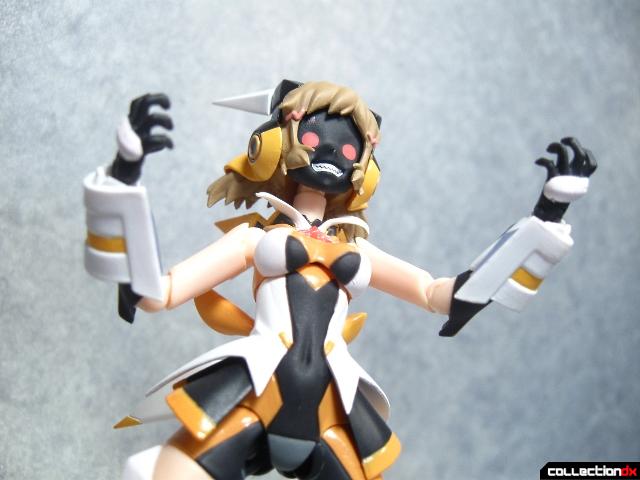 Hibiki's fourth optional face is for her infamous "berserker mode!" Due to the haphazard way she became a Symphogear user, Hibiki sometimes loses control when the fighting really ramps up. As a fan of the series I am absolutely delighted with how this accessory turned out. The all black face with two blood red eyes and her teeth clenched like a murderous jack-o-lantern is so full of character it's hard to not get swept up in how awesome she looks. She even comes with a special pair of hands that are groping the air in a manic bid for something to slaughter. 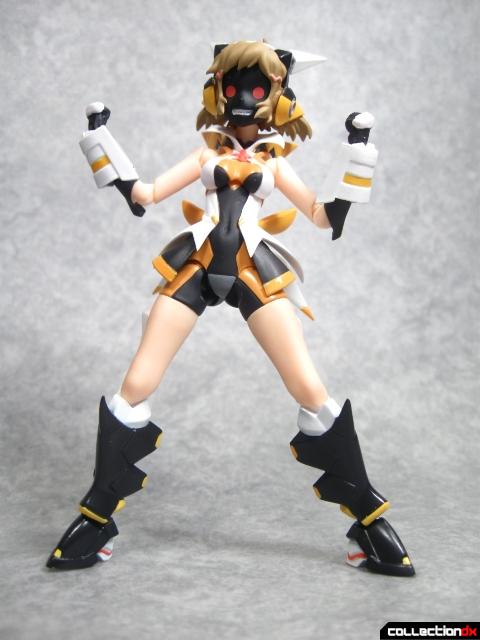 Viewers got a brief glimpse of Hibiki's dark side during her chaotic first transformation into a Symphogear user. As she was surrounded by Noise, her strong desire to protect a nearby child activated the Gungnir Relic fragments in her heart and allowed her to become a superhero brimming with barely controlled fury. 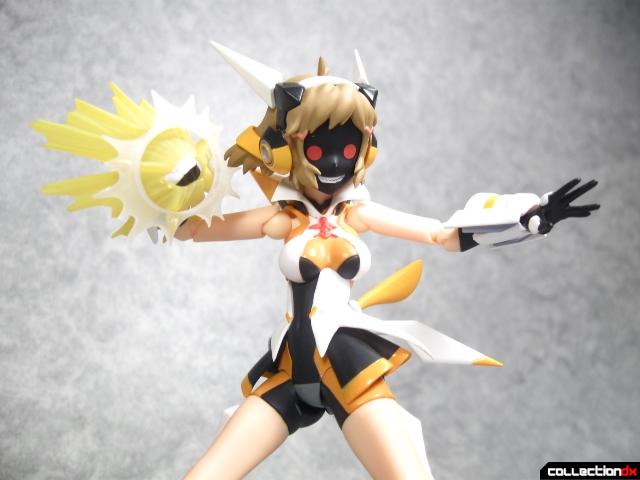 When Hibiki is like this, you can try to stop her at your own risk... 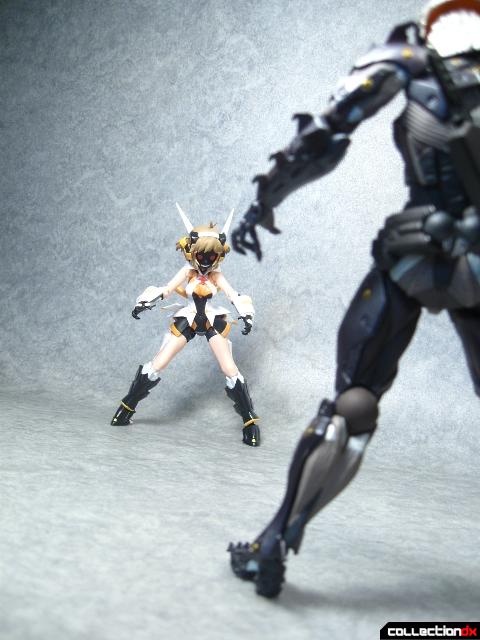 "So you're the one causing all this mayhem! Care to tangle with me?!" 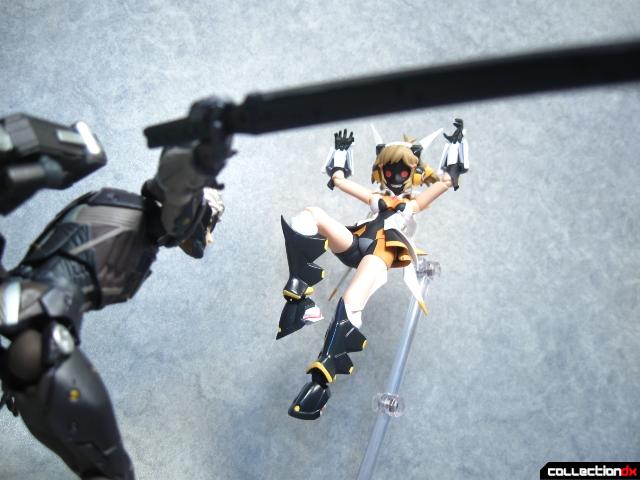 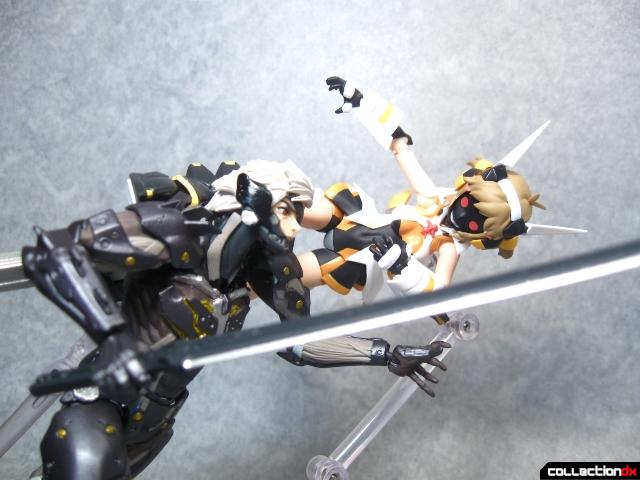 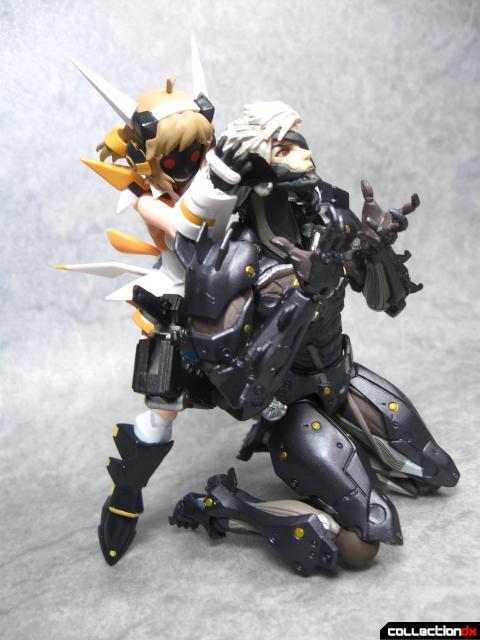 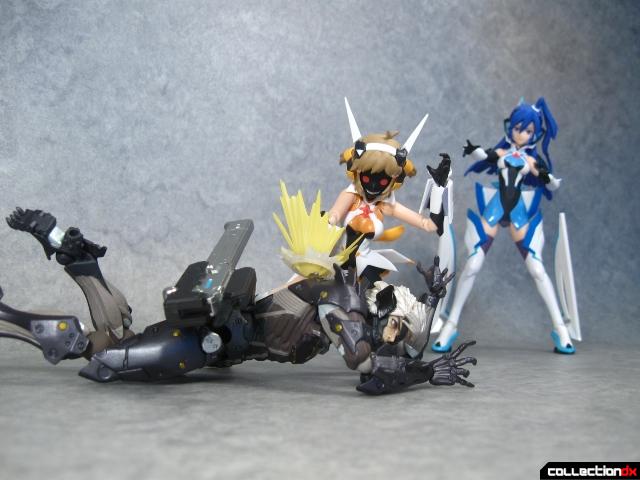 "TACHIBANA! If you don't calm down this instant you'll miss out on Miku-san's freshly baked cookies!" 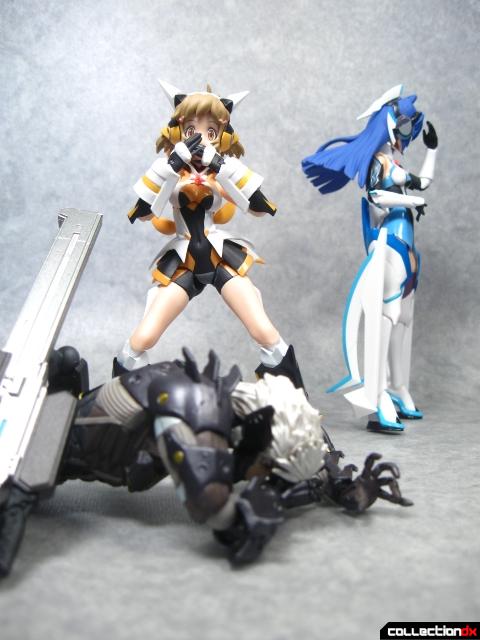 "Tachibana... You are thankfully *quite* predictable..."

And so Raiden escaped from this battle with his life, having been spared the humiliation from dying to a 15 year old girl. Rose would have been very disappointed with him.

Max Factory's Figma of Tachibana Hibiki is a fun figure that has some flaws. The looseness of some parts and inconsistent fitting for some of the pegs and holes can be frustrating. However I think the accuracy of her sculpt combined with her ability to pose and capture the spirit of the character outweighs the negatives. This figure is really quite ambitious for a Figma and does a lot to try to be the equivalent to an S.H. Figuarts but is somewhat hampered by its small size and the materials it is made from. Still I was really happy to pick one up and I think it's an essential piece for Symphogear fans.

6 comments posted
To this day, I am honestly

To this day, I am honestly shocked at how much fun that show was. I really need to sit down and watch the sequel that wrapped up airing last year.

You just gotta believe. Believe in the Bikkie.

You can't play in our reindeer games de arimasu.