The eponymous Sailor Moon is a pretty iconic character from the 90’s. In Japan, this pretty soldier started a wave of Magical Girl shows that is still going strong today. In the West, Sailor Moon was a staple for anime fans in the 90’s. Heck, the group Barnaked Ladies even included a line about watching Sailor Moon in one of their songs. 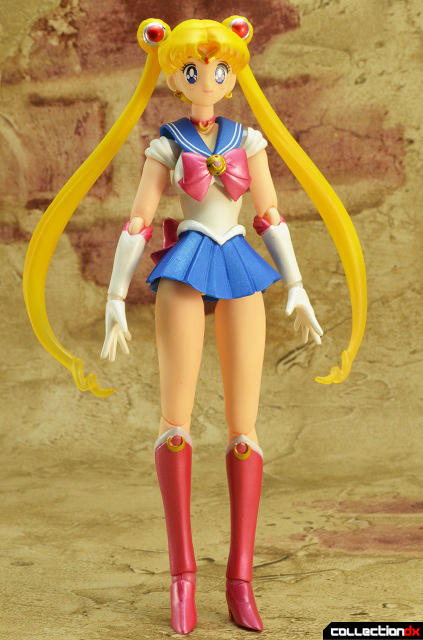 This slim soldier makes a fairly good transition into the S.H. Figuarts line. 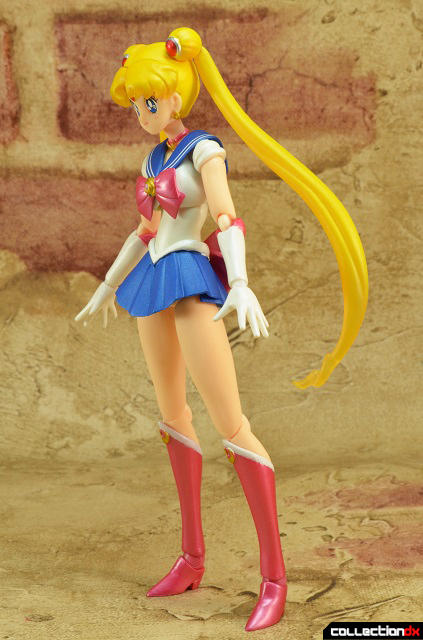 The only major qualm I have with the looks are those little pointy boots, that look a bit off due to the shape of the bottom part and the fact that the joint at the ankle visually breaks what should be a solid article of clothing. 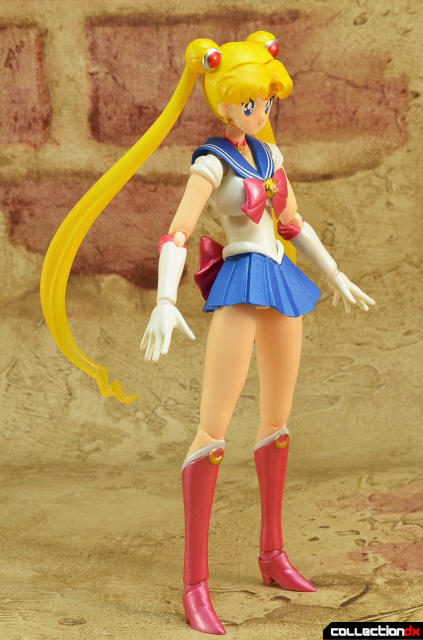 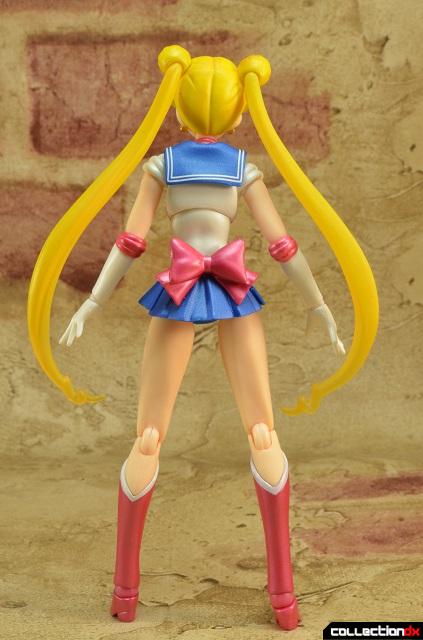 It is worth noting that the hair on this figure is composed of two types of plastic. While the top part is a solid yellow, the bottom portion of the pig tails are a semi-translucent yellow.

In terms of scale, the Sailor Moon S.H. Figuarts is just a bit shorter than the bugmen that started the line. 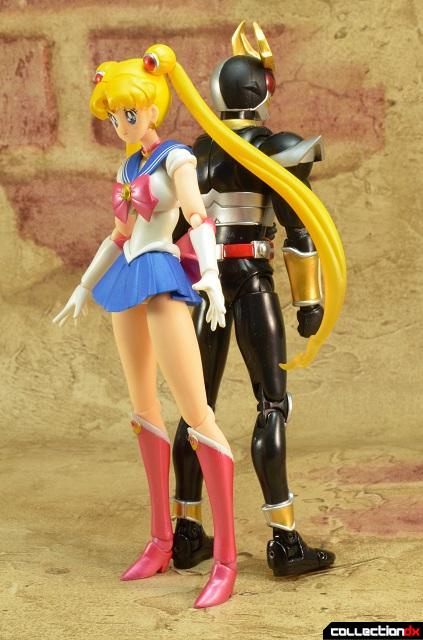 Sailor Moon has many of the great articulation points that the S.H. Figuarts line is known for: Ball-swivels in the ankles and wrist, double jointed elbows and knees, ball joint in the head and midsection, the extending ball joint at the thigh and a thigh swivel. The only glaring omission is that of a bicep swivel. 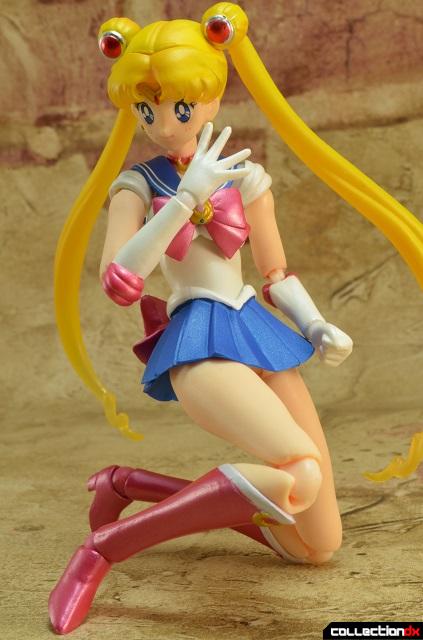 Thanks to all of the joints that were included, however, posing Usagi (or Serena, if you will) is a fairly easy. 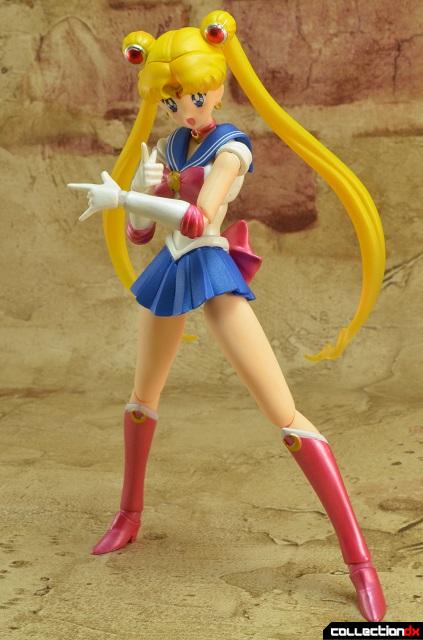 The only issue I had with the joints is that the arms have a tendency of popping off quite frequently. 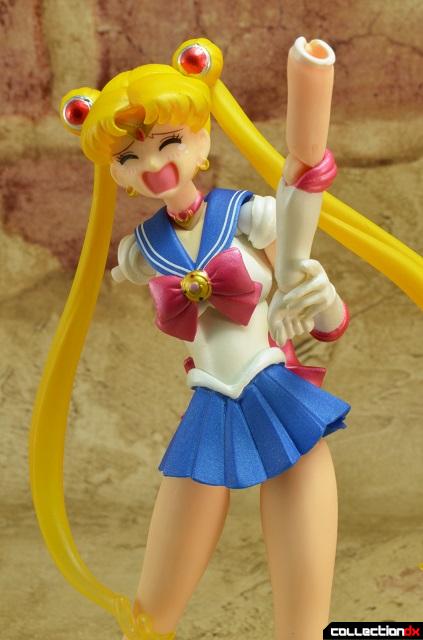 Makes a girl want to shed a tear.

But regardless, you can get a lot of great poses out of this figure.

For extras, Sailor Moon comes with a respectable 10 hands. Yes, I know that only 9 are pictured. We will take a look at the 10th hand later.

The first release of this character comes with 6 very expressive faceplates.

The winking and crying faceplate are exclusive to the first release and will not be included if this character is reissued at a later date.

The faceplates go on in the usual fashion: you take the front hair piece off and swap out the faceplate. 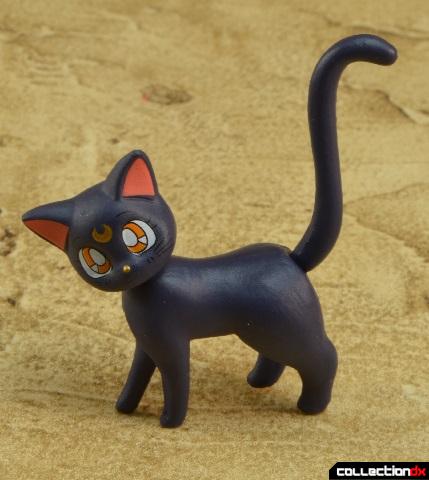 While Luna is a great addition to this set, the execution of this extra feels a bit half-assed. Looking at the kitty from eye level or below, you can see the neck of the toy, which Bandai decided not to paint. 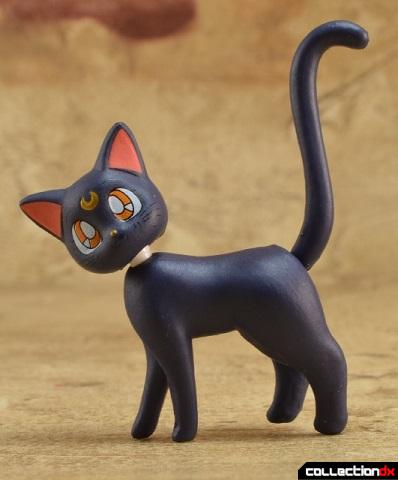 Also, the rear right leg of Luna does not come down as far as the other three legs. 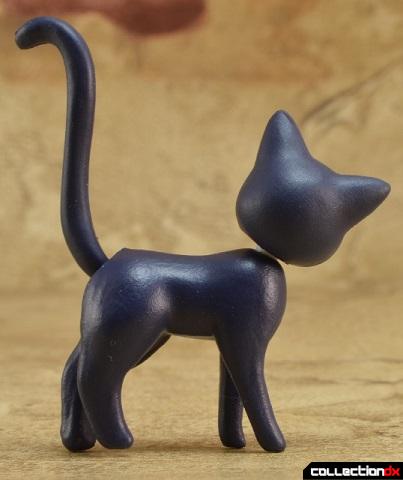 This was probably done to give Luna an in-motion look. It also makes the kitty a bit unstable and prone to falling over.

Issues aside, it is great to have a Luna to accompany Sailor Moon. 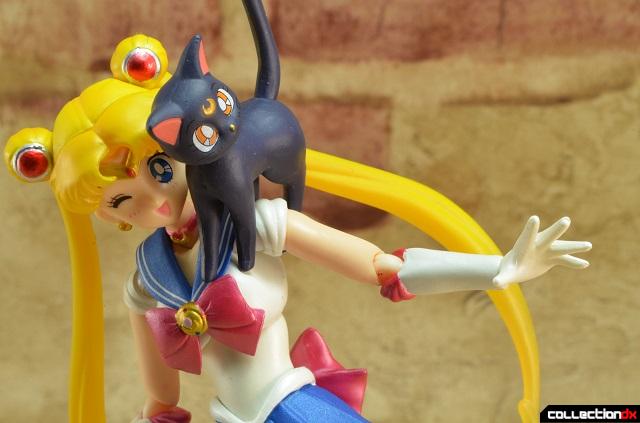 Sailor Moon also comes with her signature Moon Stick and its upgraded form with the silver crystal. 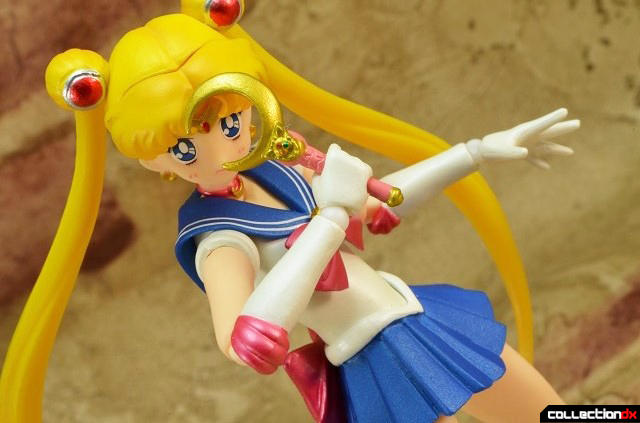 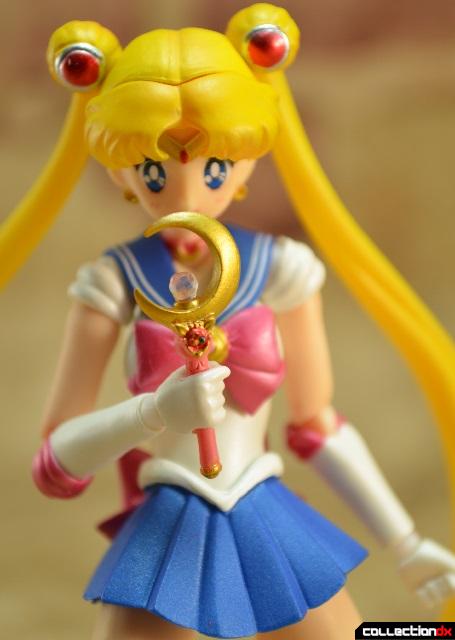 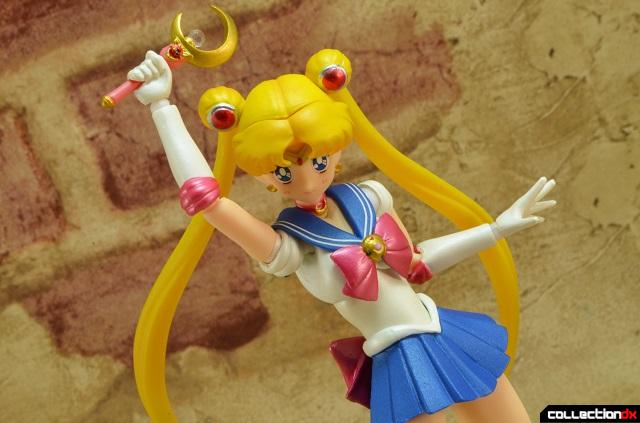 She also comes with an effect part for her tiara, which looks like the energy disc that the tiara becomes as Sailor Moon is about to chuck it at the monster of the week. 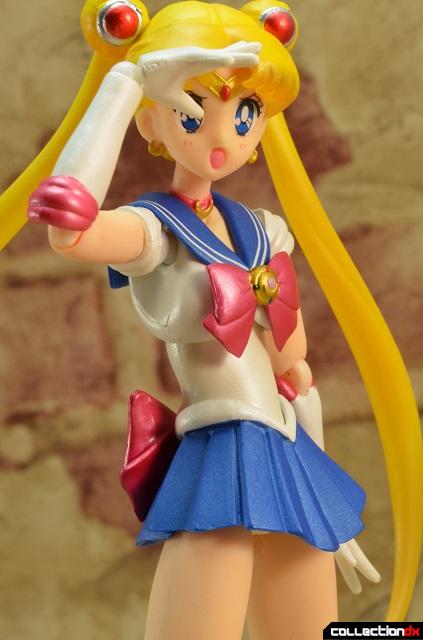 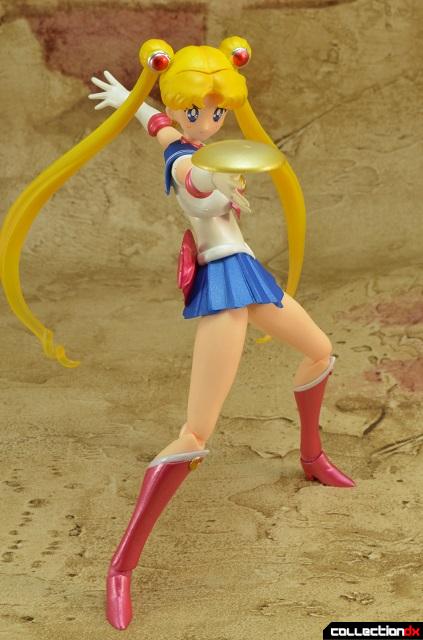 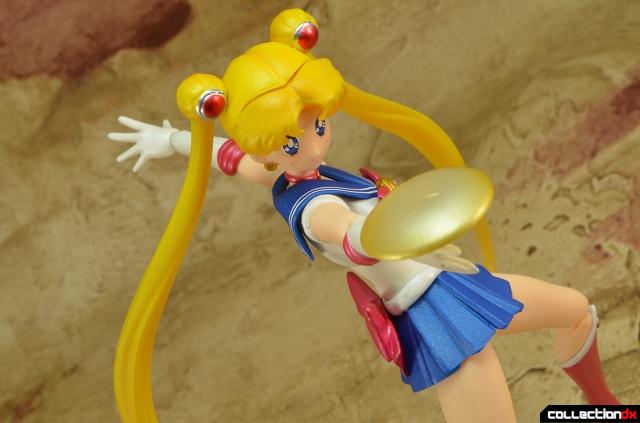 This effect part is attached to the 10th hand for this figure. 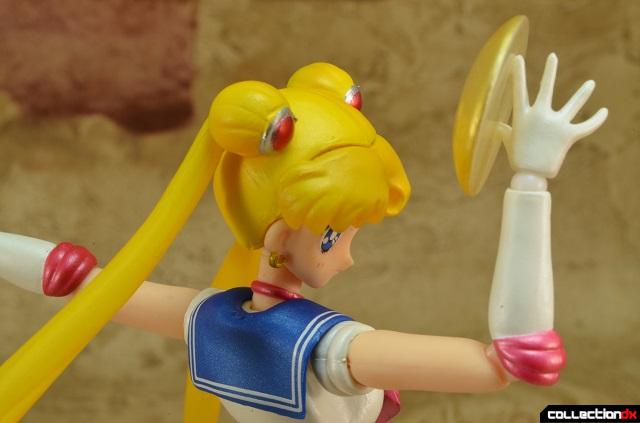 Finally, Sailor Moon comes with her very own stand with a heart-shaped base. 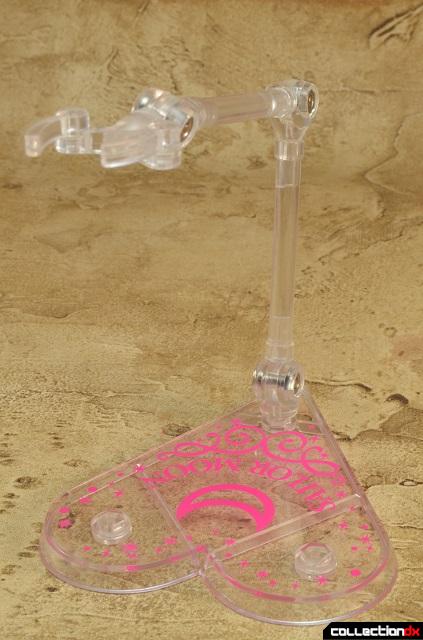 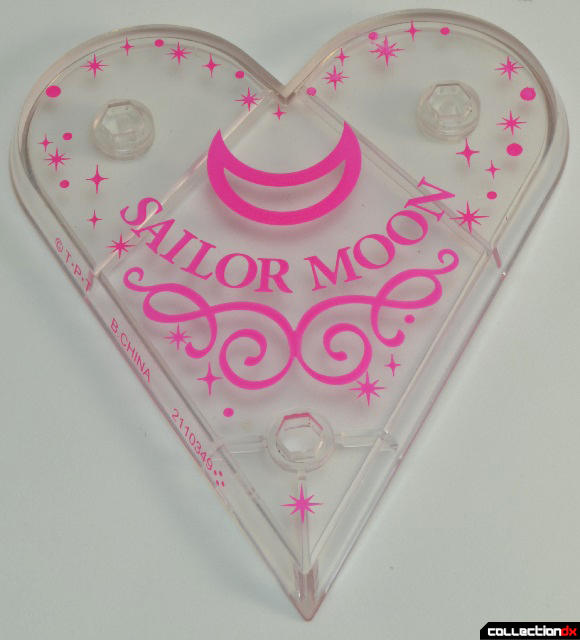 With this release stand is a necessity for those that do not want to spend a lot of time trying to pose her, while making sure she has a solid footing with those little feet of hers. If you don’t stand her just right, she will fall over. You can also use the stand to get better action poses with your Sailor soldier. 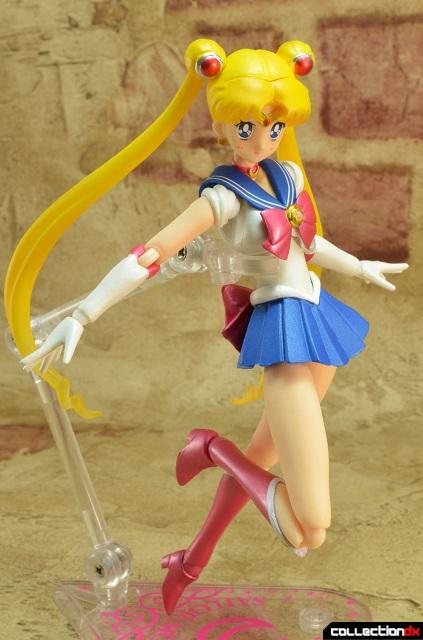 Overall, Sailor Moon is good release in the S.H. Figuarts line. The aforementioned issues with the arms coming off constantly and the half-hearted inclusion Luna, keep her from being a great release. That being said, this is the first good action figure of this action gal; so I think that fans of the pretty soldier will forgive this toy for its shortcomings and rejoice in the fact that something like this was made. For me, however, this is probably the only figure in the Sailor Moon S.H. Figuarts line that I am going to pick up. 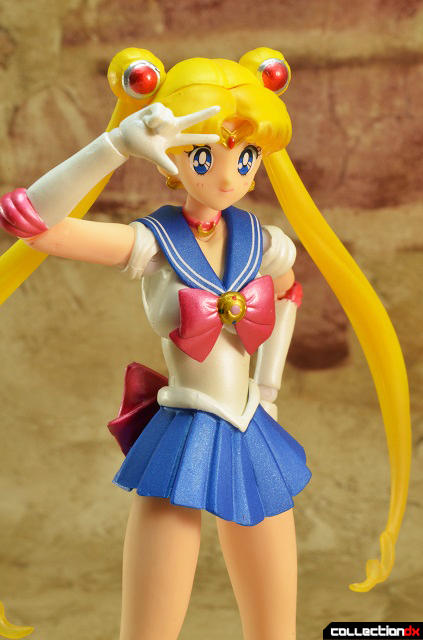 13 comments posted
Can not wait to have her, I

Can not wait to have her, I know Im getting her for christas, but it is such a long wait till then.... meanwhile I am revisiting the anime with my wife...

Very cool. I also watched a handful of episodes to get me in the mindset for this review.

It's funny that it's taken them this long to make these figures, considering the popularity of the series. You'd think they would have been feeding off the nostalgia for this one for awhile now!

I think Bandai wanted to play it safe and run the figures along with some sort of media that would bring the nostalgia back to the general public. Which is why they waited till Toei announced the new anime series.

I have the utmost respect for Sailor Moon. However, as she is not a robot, I will pass this one up.

With the release of the S.H. Figuarts, I have come to realized that there is a huge male fan base to this shojo series...
I think the anime is a lot of fun, even with all the love girl drama, and also share some elements with shonen... maybe made on purpose...

The monsters desings are awesome...

Is it too much to ask for a bottom view of the fig?

I wanted to keep the review as classy as possible. Which meant no upskirt and not including perverted Woody in any of pictures.

I love this figure! I pose her with my Power Rangers.

Maybe she can give your White Ranger a little help with his arm issue.

odds are, your Luna's head is not pressed on it's body tab all the way, just saying...