Scarlet Rain is the red king in Accel World. Known as the Immobile Fortress, this duel avatar is capable of summoning a giant suit of armor with a million guns on it and can easily destroy any opponents in Brain Burst.

In the real world though, she is just an 11 year old girl who loves to play violent video games.

I'm not sure how it exactly happened, but somehow I ended up with all of the Accel World figma releases. I can't say that's a bad thing though, considering they are pretty cool designs and Scarlet Rain is no exception. 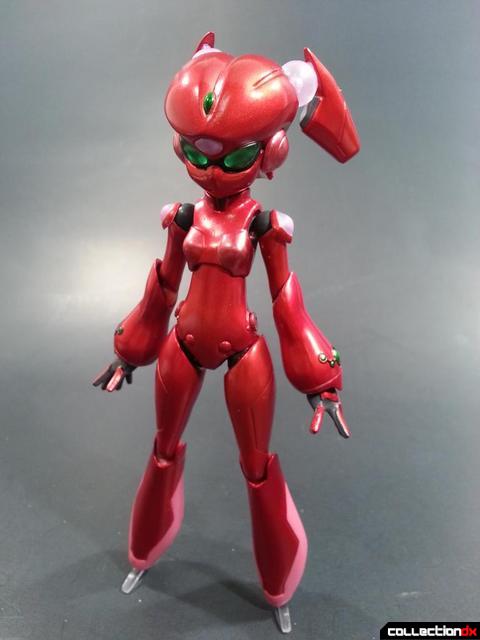 If you don't know anything about Scarlet Rain, it's pretty accurate to just call this toy a red Drossel. It's actually pretty spot on if you look at the two designs side to side. 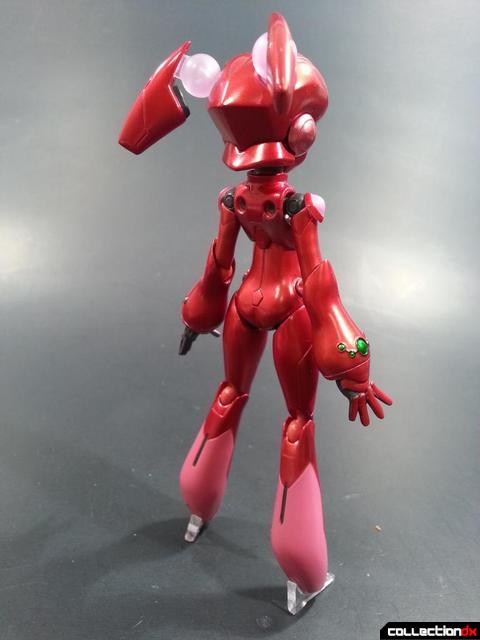 Scarlet Rain is covered with gorgeous metallic red paint that really makes her shine in the light. The clear plastic used in the eyes also catch light perfectly to make them seem like they are lit up. The pink clear plastic used in her pigtails and shoulders serve as an excellent accent to the mostly red design. 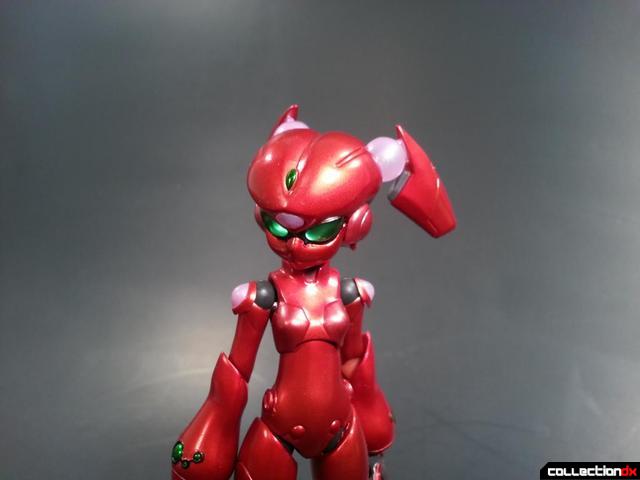 Considering how much smaller she is compared to the other characters in Accel World, Scarlet Rain is pretty small as far as figma releases go. It's accurate to scale though so I can't say that that's a bad thing. Plus that also means that Squid Girl has a new comrade in tentacles. 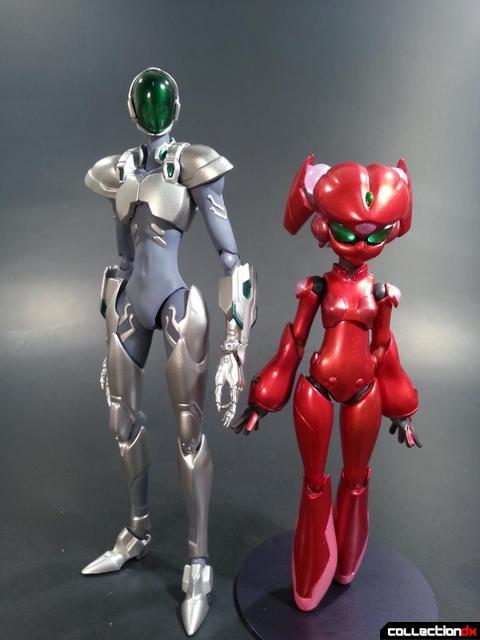 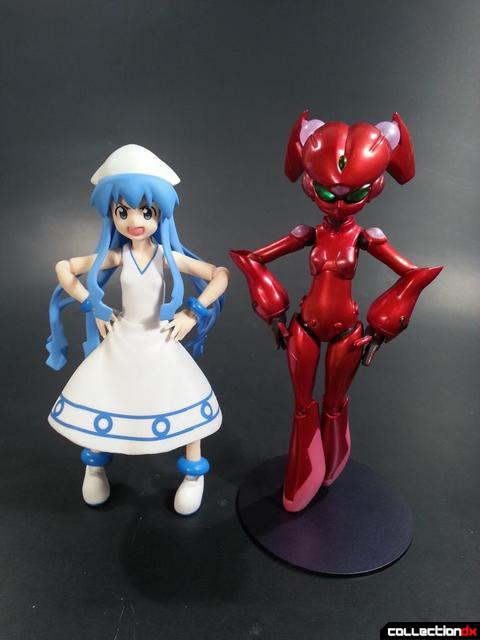 Scarlet Rain's articulation is pretty good. Her arms use the smaller figma joints for more slender figures, which unfortunately limit her arms a bit more than a regular figma joint would. Her torso joint is also near non-existent due to her small size. 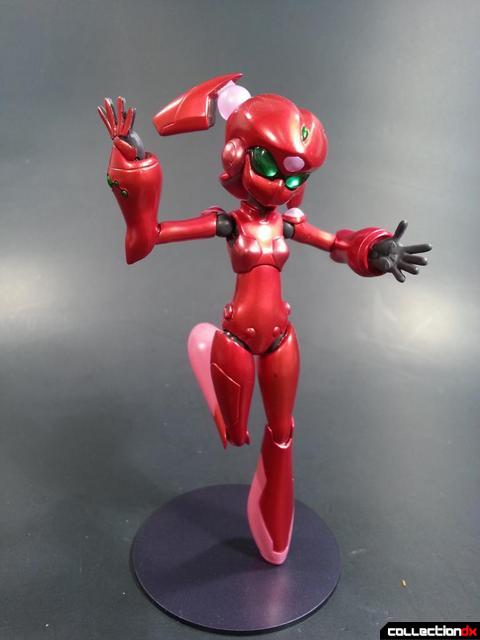 Her pig tails are also ball jointed which is great for subtly changing various poses. 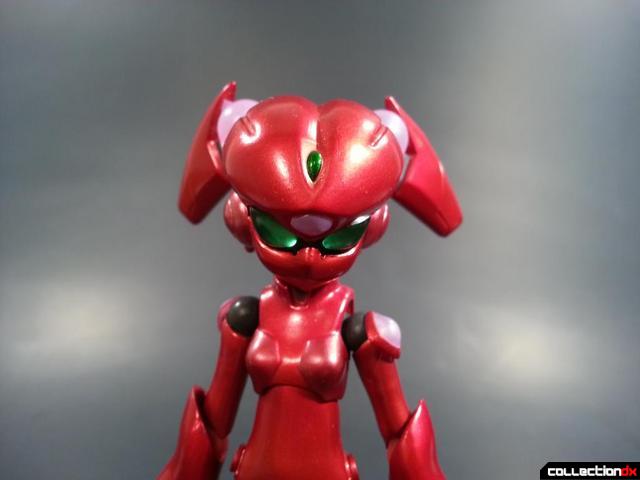 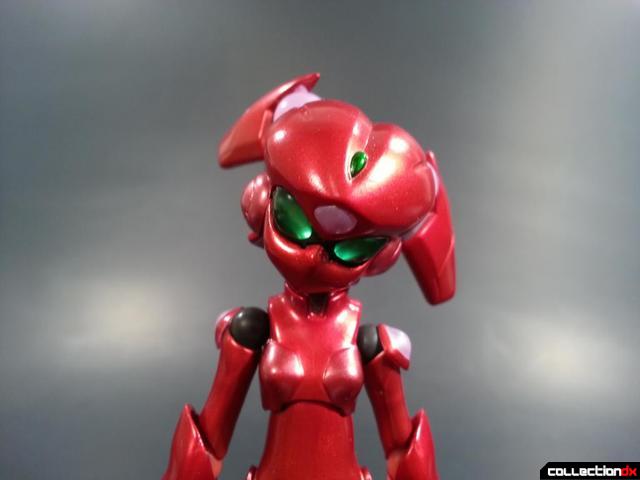 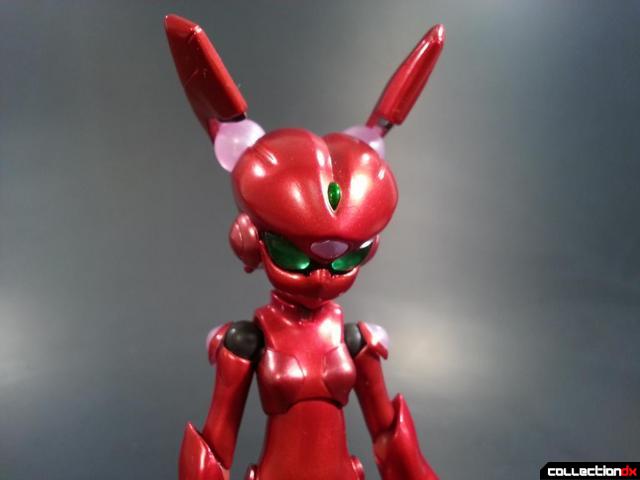 Due to the sculpt, her legs don't get a lot of motion. In order to combat that though, you can pull down the t-bar her hips are on and pull her legs out further for a wider range of motion. 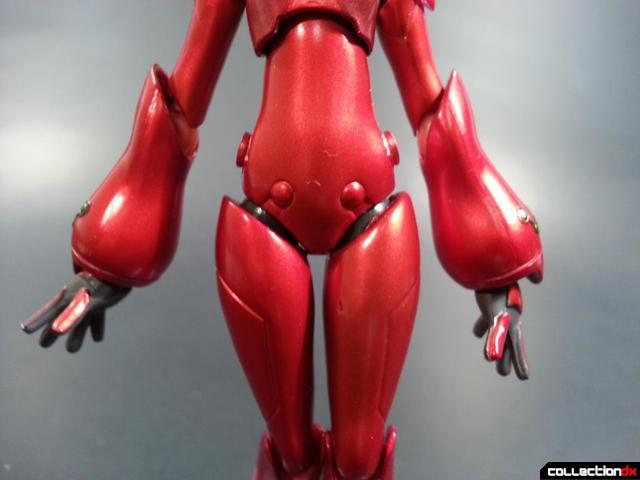 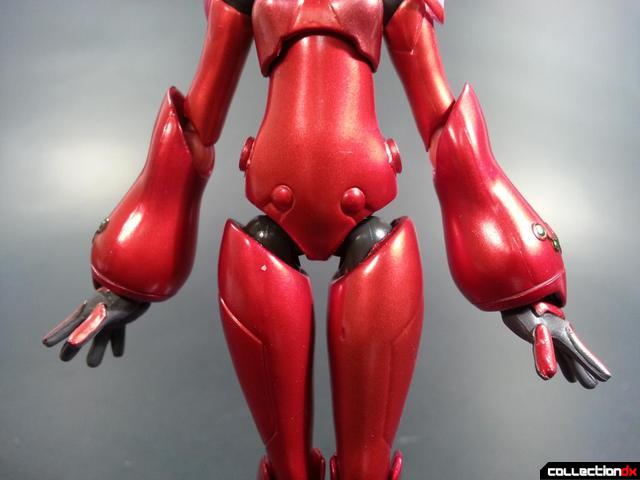 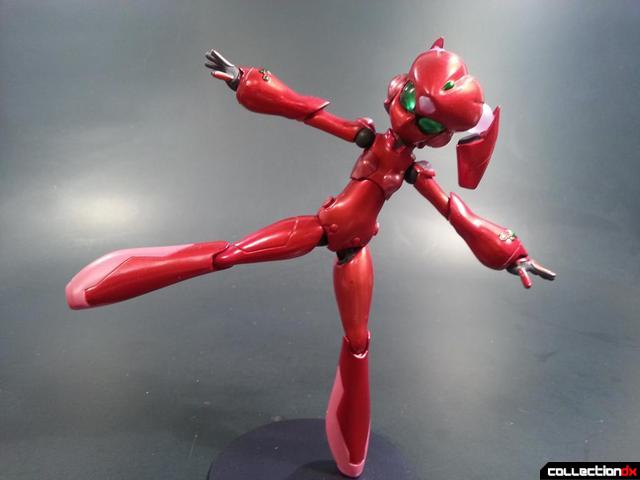 You may have noticed that this design does not have feet. In order to deal with that accordingly, Good Smile Company has included not one, but THREE different display options. The first are the ones I've had equipped so far which are two small clear stand pieces that attach to her feet that allow you to prop her up. Although they work, I find them to be a little loose and fiddly. 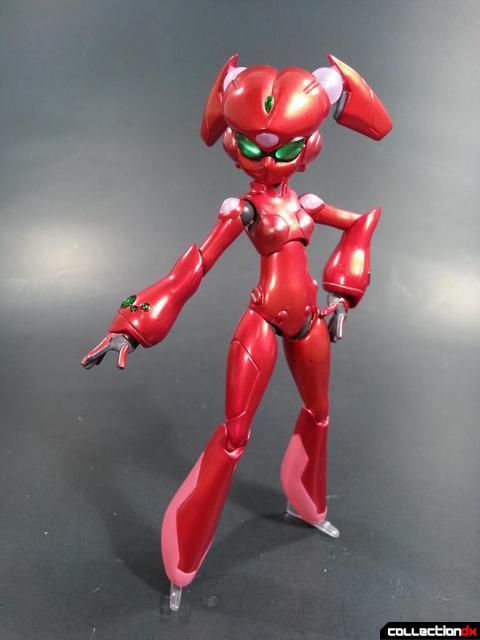 My preferred way of displaying Scarlet Rain is the gray base that is included. It pegs into the feet just like the clear stands do, but is much sturdier. 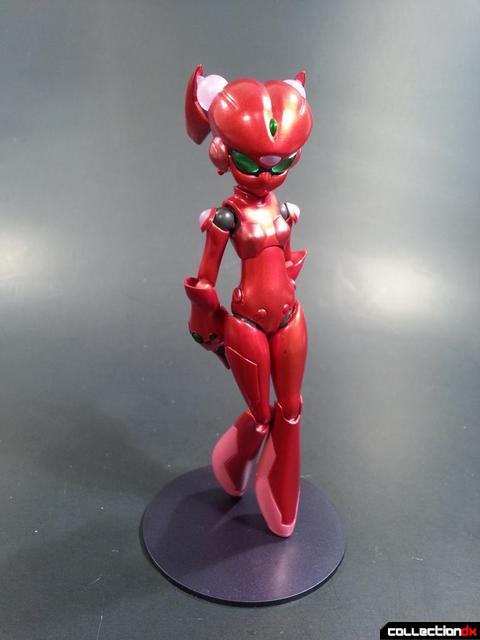 The final option is the good old, figma stand. However Scarlet Rain is such a small figure that they could not fit a peg hole into her back, so she comes with an additional clip to hold her up. It works fine, but is not my personal display method.

Scarlet Rain's accessory count is pretty solid. She comes with your standard set of figma hands, a stand, and two different weapons. 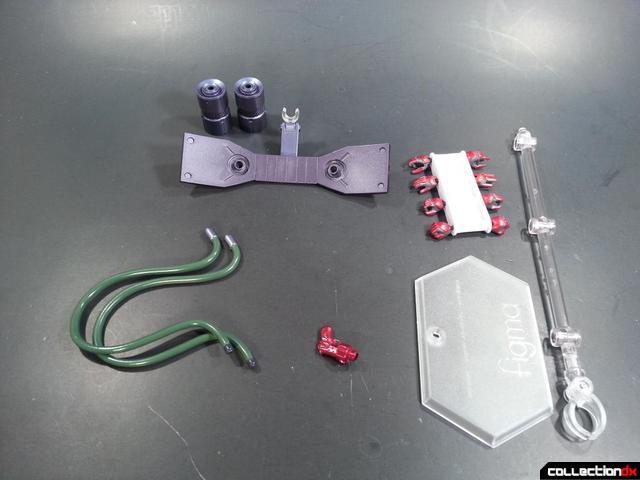 The first is a small red gun. Considering the kinds of weapons the character is usually using, this one is comically undersized but kind of cute in that regard. 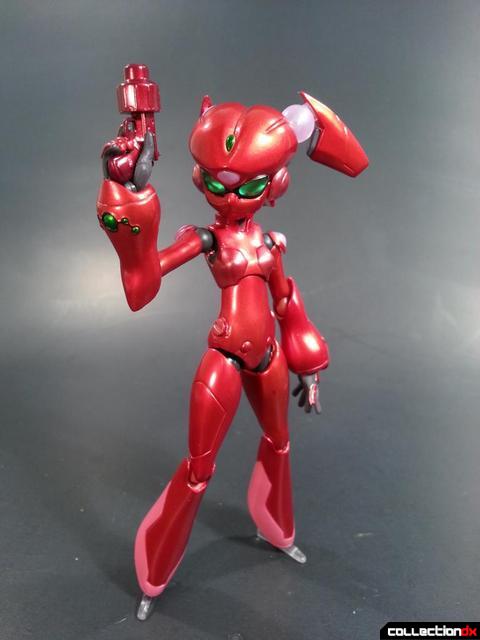 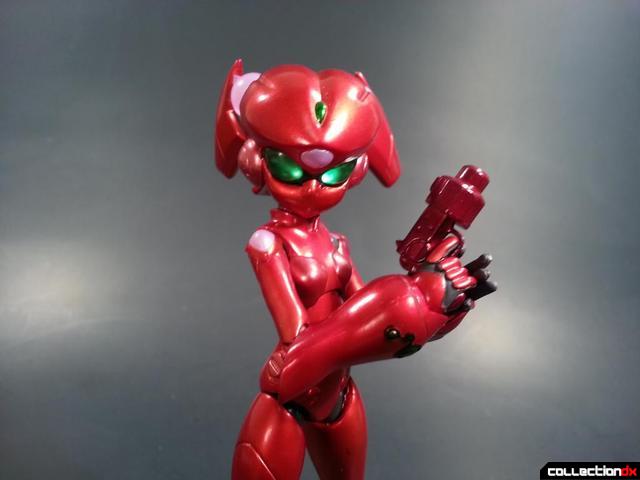 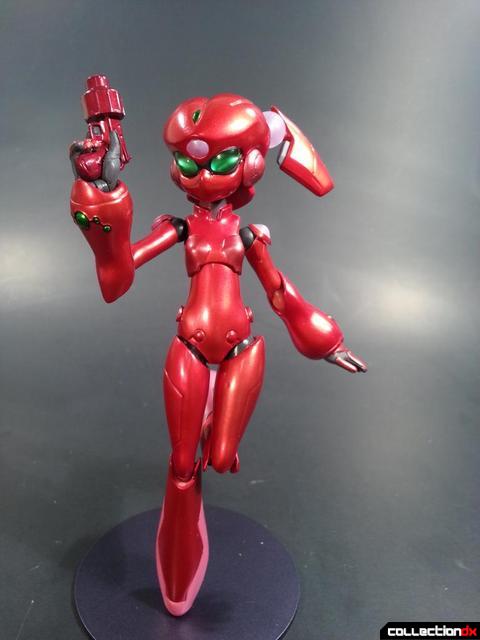 The second is much more elaborate and unfortunately doesn't work entirely well. It's a set of two beam cannons that plug into her arms along with a satellite behind her that attaches to her via two wires into the back. The cannons plug into the arms just fine and that's not a problem. The back piece is where things get messy. 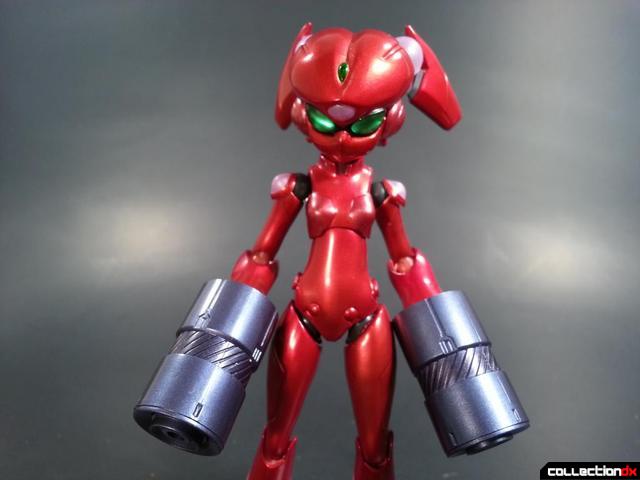 The satellite piece needs to use the figma stand to clip on and hover in place. Then you need to plug the wires into the satellite and then into her back, but the pegs that go into her back are too shallow and just do not work. Plus since it is attached to the figma stand, you are drastically limited in how you want to pose this. 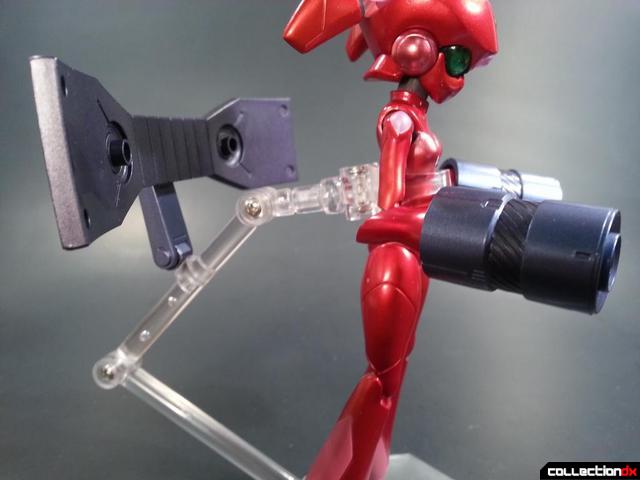 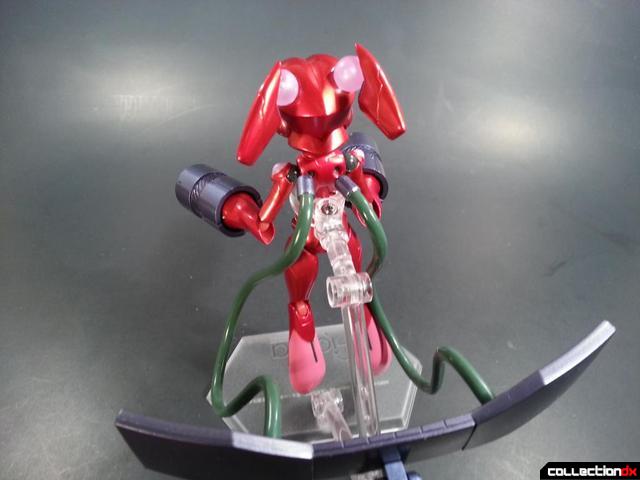 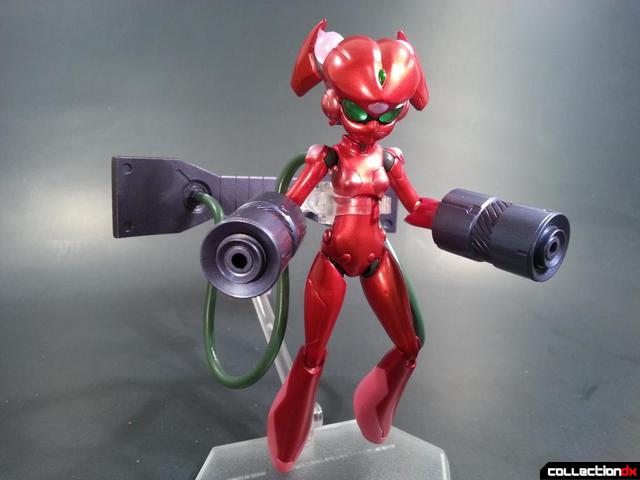 Due to frustration, I just leave that piece off entirely and just use the two cannons by themselves. It works pretty good if you wanna give her a Megaman blaster of sorts. 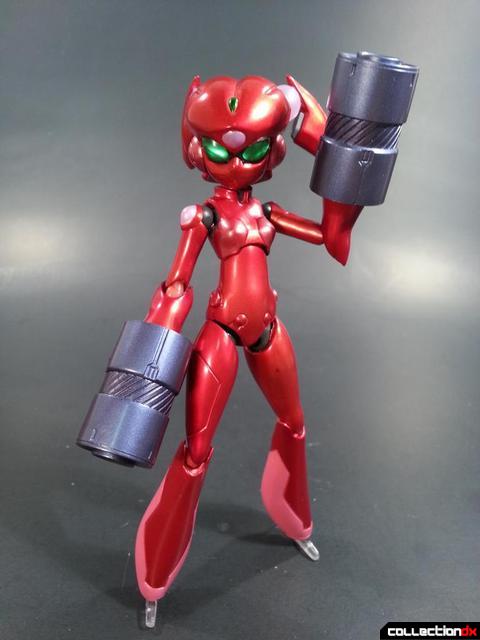 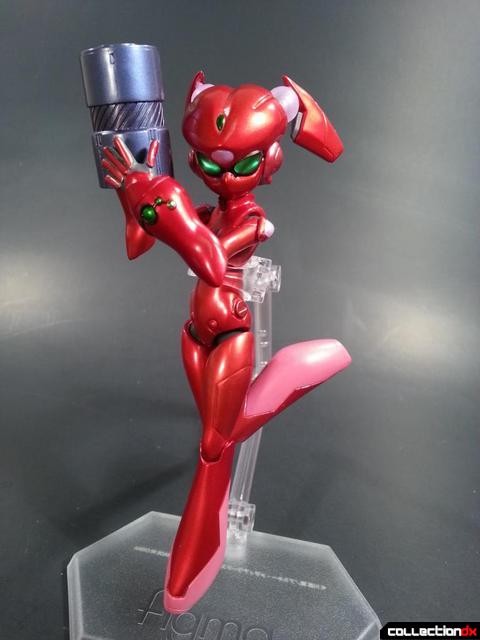 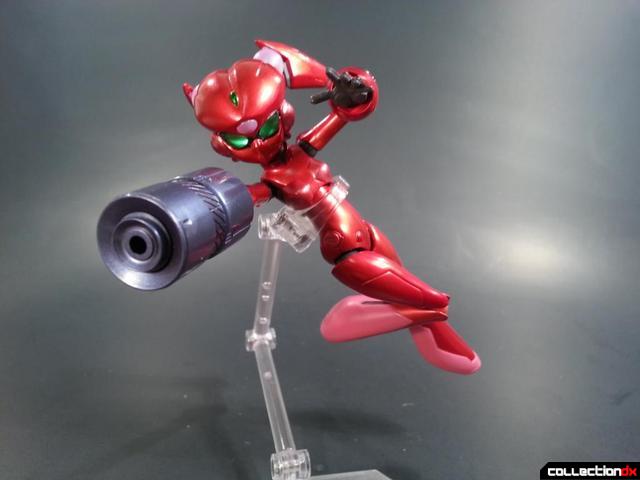 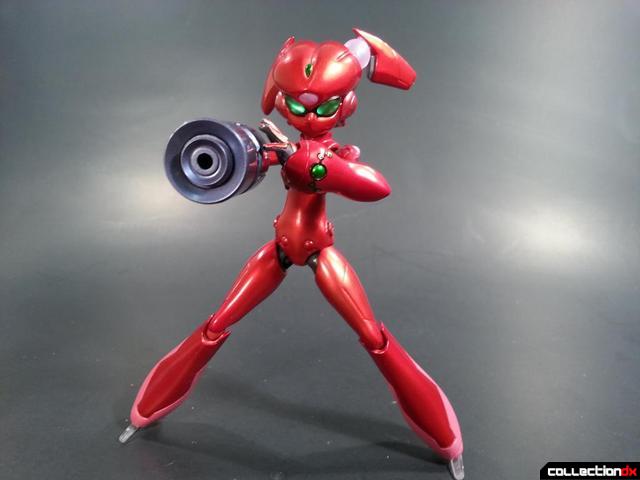 Even though she comes with a weapon accessory that just does not work at all, figma Scarlet Rain is still a very nice figure and an accurate representation of the character from the anime. Even if you don't know who she is or the show she's from, it's still a very cute design that can stand on its own. Definitely worth picking up if you like the color red. 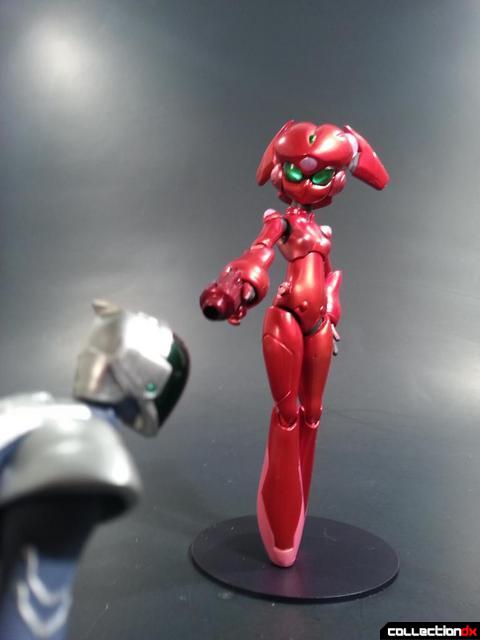 Odd that the metallic red paint on this figure don't seems to be as reflective on photo as it is in the video. I never realize that the arm parts are supposed to be weapons. I always thought those, in conjunction with the cables and panels on the back, represent the cut down version of the control mechanism of Scarlet Rain's Weapon platform.

Also, in terms of scale, I think the Scarlet Rain is actually a bit too big next to the other Accel World Figma, because Scarlet Rain should only be around waist height next to Silver Crow. Of course, if they make it even smaller than it is now, then it would be too difficult to set a good selling price for it.