Head to Amazon.com to get your own Sailor Mars! 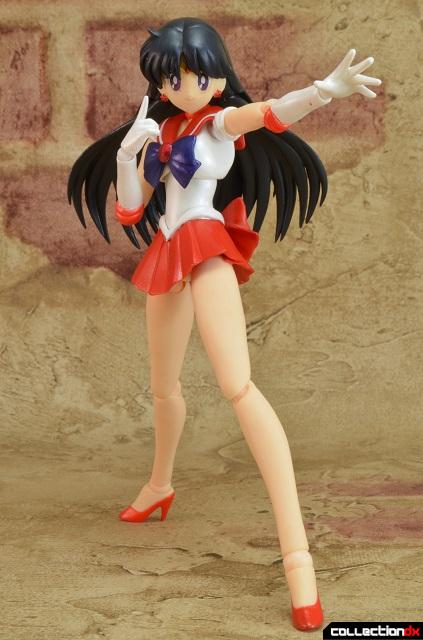 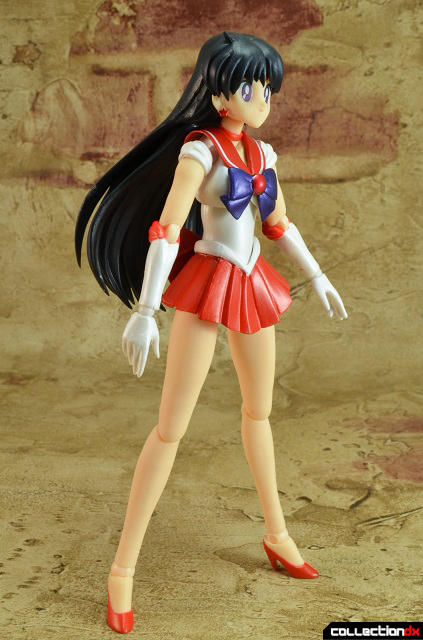 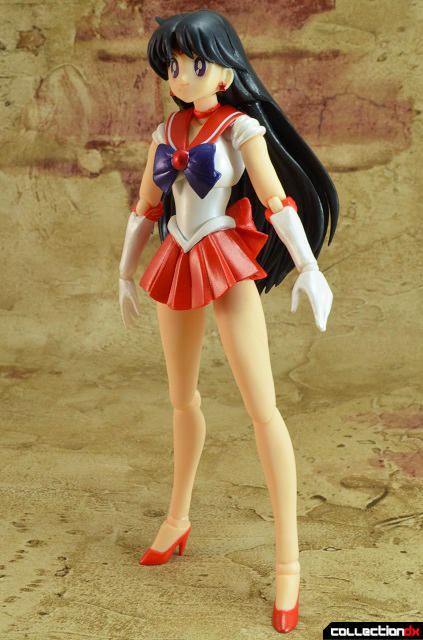 Overall, this is a pretty good representation of Sailor Mars. The body of the figure is excellent. The head, however, could have been better.

Sailor Mars’ full hair in conjunction with the neck are the cause of my biggest nitpick with this figure.  When facing forward, Sailor Mars’ hair pushes against the back of the figure and does not allow the head to rest in a normal and upright position. 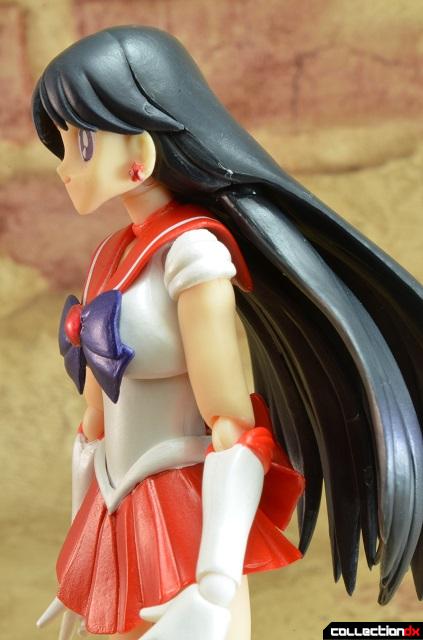 Instead, she will lean forwards like she is always hearing something interesting. This could have easily been alleviate with a ball joint and the base of the neck, which appear to be missing from all of the Sailor Moon S.H. Figuarts.

Also, the hairline on the toy is lower than it should be. 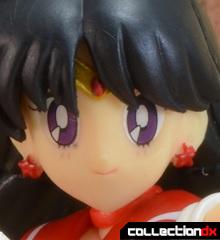 From the back, you get a better look at the hair, which looks a bit too plastic-y for my taste. Looking back at S.H. Figuarts Sailor Moon’s hair, it too is not very detailed. With Sailor Moon, however, it is less noticeable, since she has much less hair than Mars. 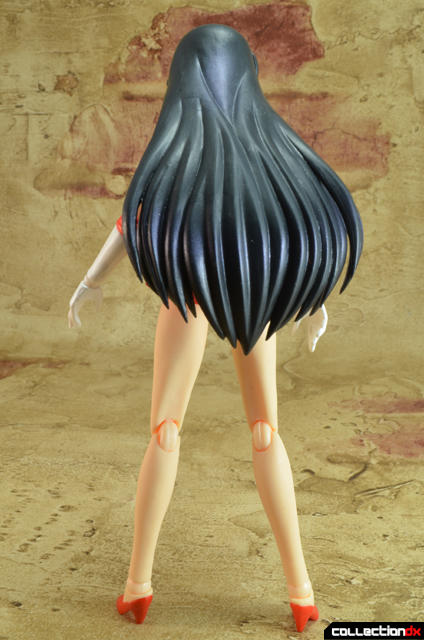 However, the amount of detail in the hair sculpt for the Sailor Moon characters in on par with other S.H. Figuarts releases. I guess I have been spoiled by the nicely detailed hair sculpts, featuring more strands of hair, of the recent Saint Cloth Myth figures. 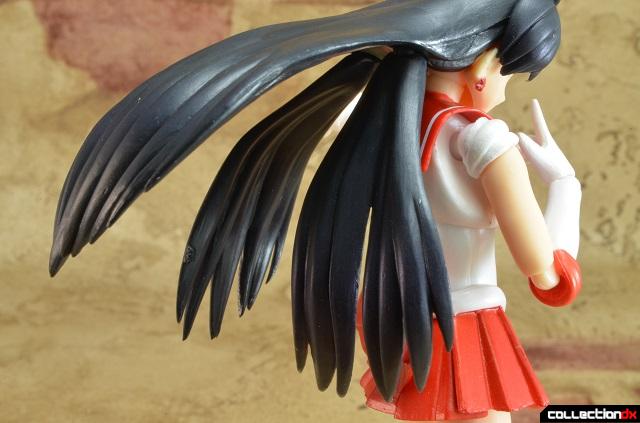 Sailor Mars’ hair does, however, feature two small hair segments attached to the back part of the hair via ball joints. So these pieces of the hair can be moved independately of the main hair piece, to provide more dramatic hair posing! So at least the hair has that going for it.

Besides the issues with the head, each of Sailor Mars gloves have a small red spot on the white part of the gloves. Since they show up on a some of the pictures anyways, I didn't bother taking pics of these small imperfections.

These issues can be easily overlooked since this is pretty good action figure, with as much articulation as the Sailor Moon Figuarts. 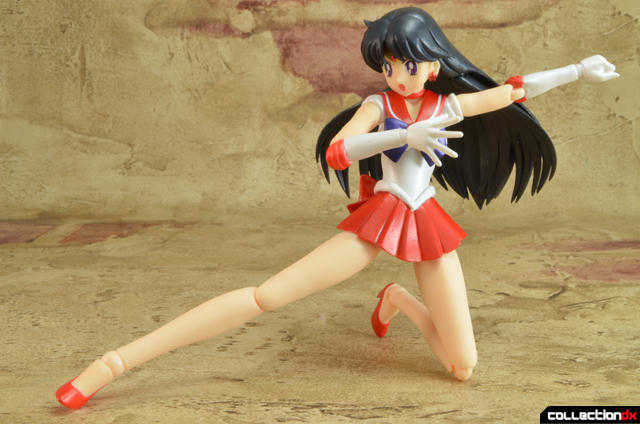 Sailor Mars features 4 faceplates and 8 hands for your posing needs.

So she can pull off her Fire Soul attack. 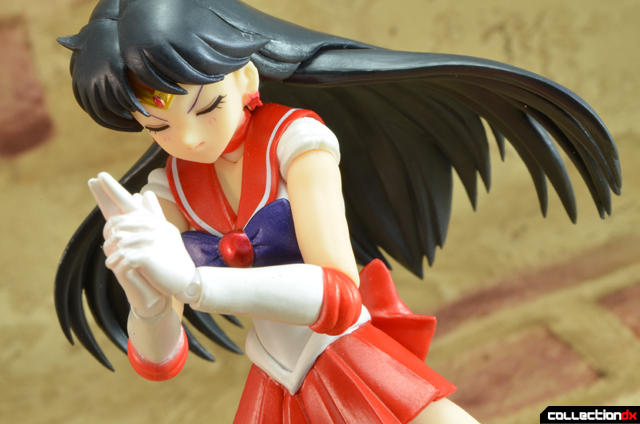 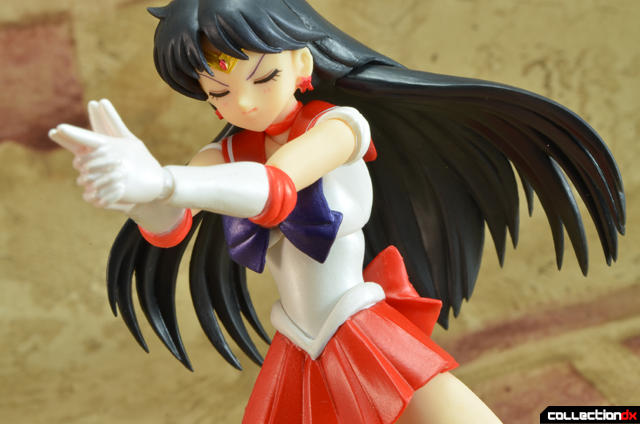 Sailor Mars even comes with a special hand to hold her o-fuda (charm) which she can use on its own or to perform the Fire Soul Bird attack. 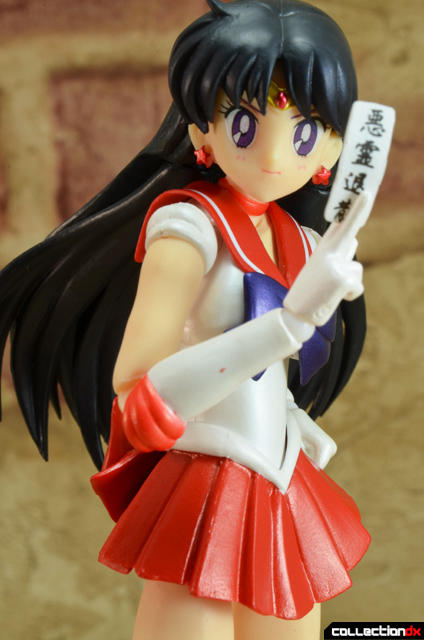 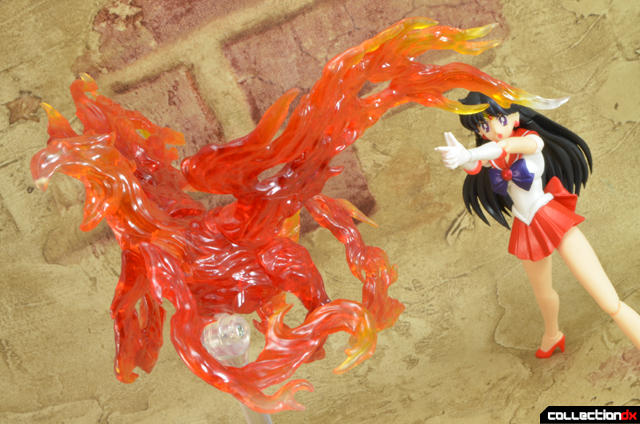 Phoenix Ikki was nice enough to lend his fellow fire soldier his effect part so that she could complete her attack. 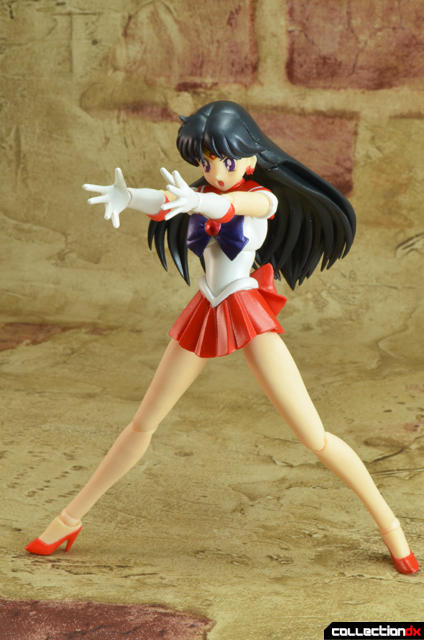 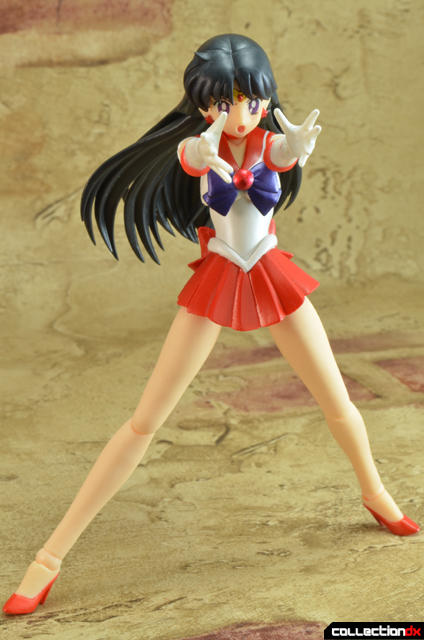 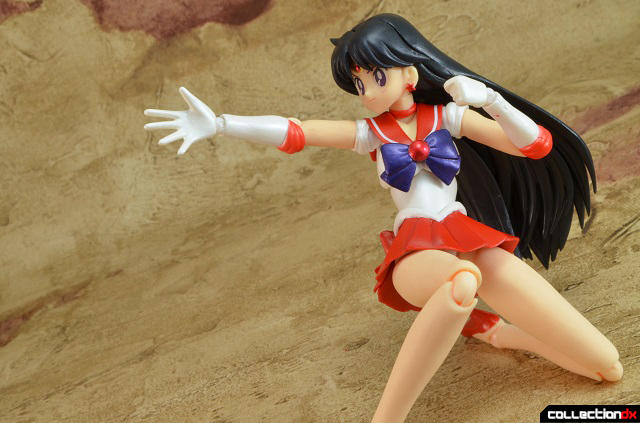 Like her leader, Sailor Mars also comes with her very own stand. The base is shaped like a heart and has “Sailor Mars” printed on it. 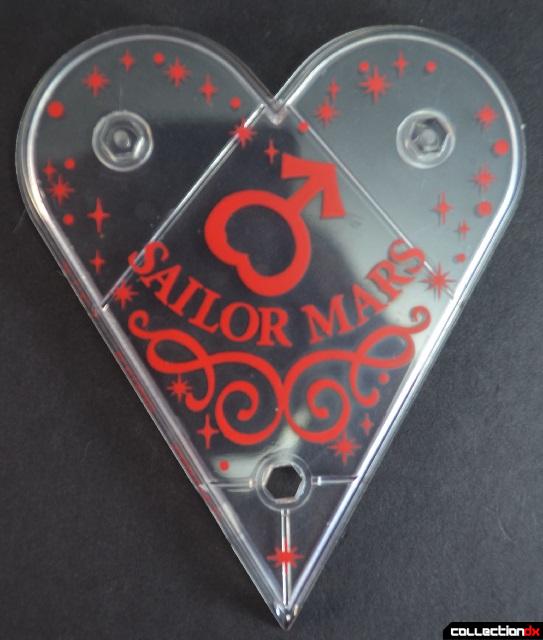 For Mars the stand is an even bigger necessity than it was for Moon. Mars’ high heels have a smaller sole and a wider gap between the sole and the heel. This makes getting her to stand and keeping her upright quite a daunting task. But thanks to the stand, she can perform wide stances and even an aerial attack against that perv in your toy collection. 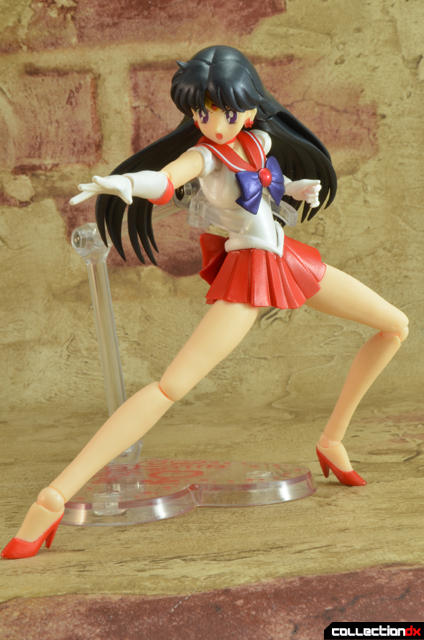 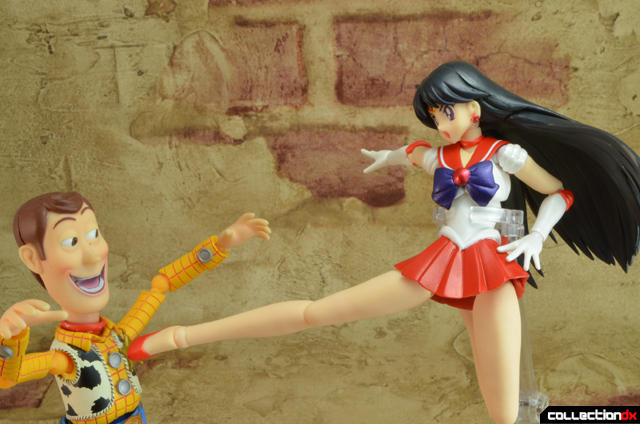 Overall, Sailor Mars is a great figure, with a couple design flaws. 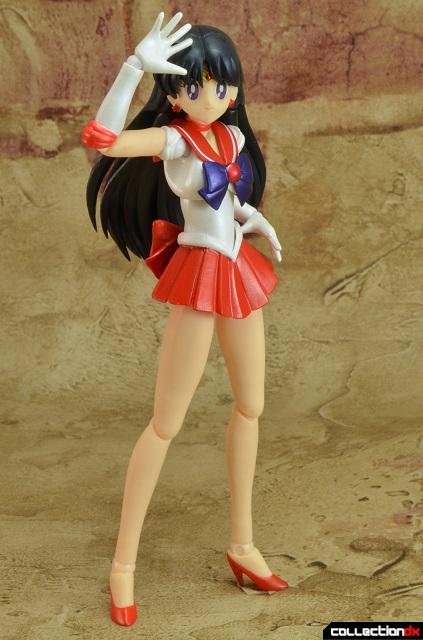 Furthermore, she also feels a bit light in the extras department when compared to the leader of the Sailor Senshi.  In the end, she makes a great companion for Sailor Moon. So she is a good purchase for fans of Sailor Mars or for those who are looking to complete the set of Sailor Moon figures. 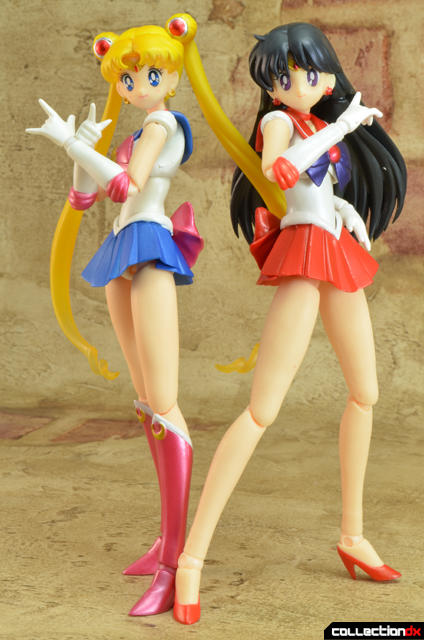 Head to Amazon.com to get your own Sailor Mars!

Deja Thoris not withstanding, but this Martian woman is scary looking. Guess the character design models don't translate so well in plastic or they made the mistake of having her ears molded into the removable parts.

I think the biggest issue is with how her head doesn't rest in a natural position when it is pointed forward.