\Ultra Act Red King came to me at about the exact same time my daughter and I were about to watch episode 8 of Ultraman. Which just so happens to be the episode Red King appears in called "The Lawless Monster Zone". Yes my daughter loves Ultraman and squeals with delight when I pull out the DVD sort of how I squealed when I received this in the mail.

Red King comes packaged in the typical Ultra Act box with a cutaway that shows off only just enough of the contents to make it interesting. Sort of like a little strip-tease. 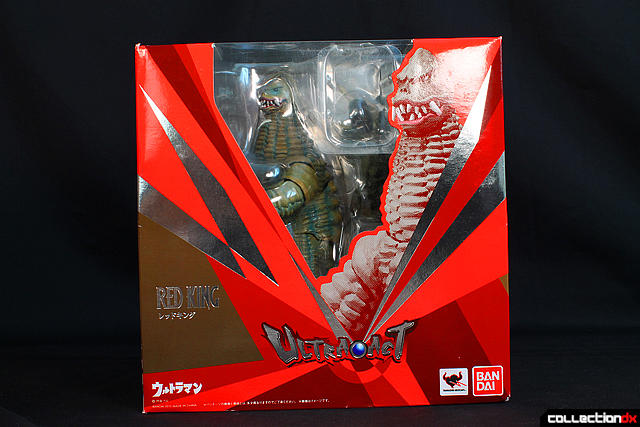 The back is just your usual stock photography. 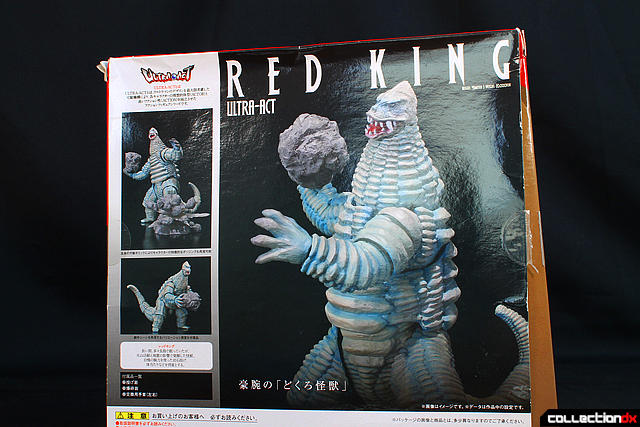 Red King carries some considerable weight for a figure. The figure consists entirely of PVC. The sculpt and paint applications are excellent. Because of the Michelin Man type design, the seams aren't much of an eyesore. They go along with the natural lines in his folds. 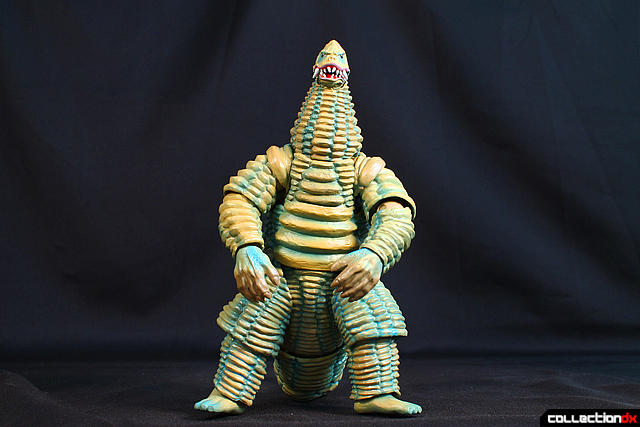 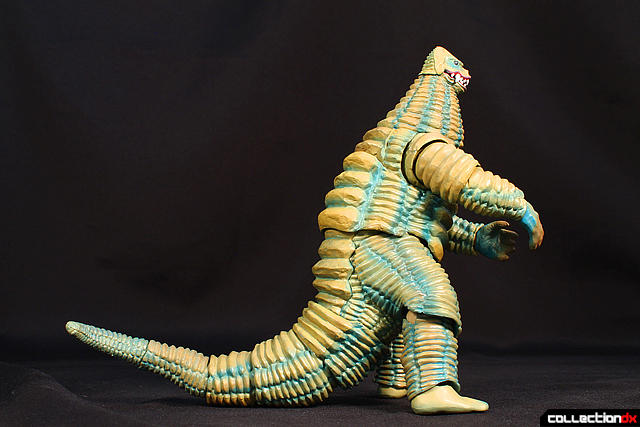 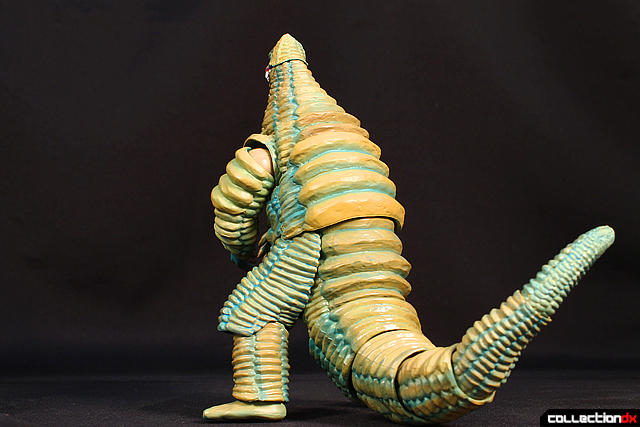 I've split him in half to show off the ball joints in his waist. You'll notice there isnt much clearance, just enough to allow movement. 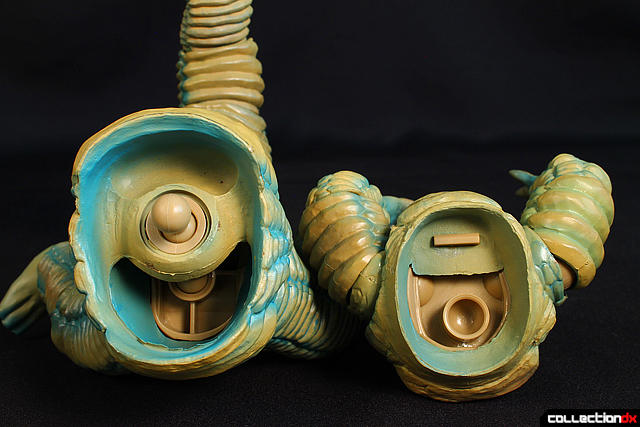 This face sculpt looks like it jumped right out of the show. 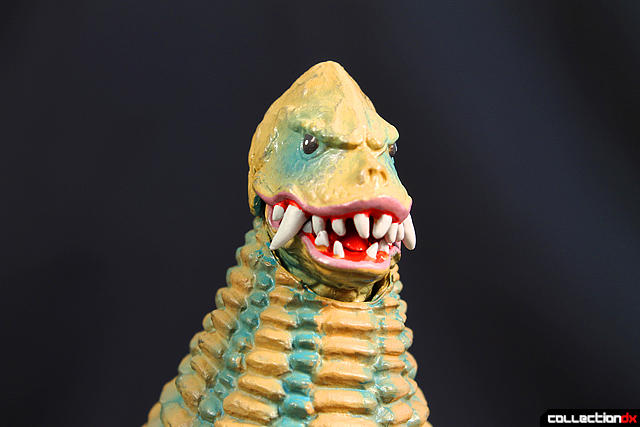 Now, it wouldn't be an Ultra Act figure without some excellent articulation. Well, as much as you can extract from a design such as this. For those of you who have handled S.H. Monsterarts Godzilla, you will feel a similarity between the two. 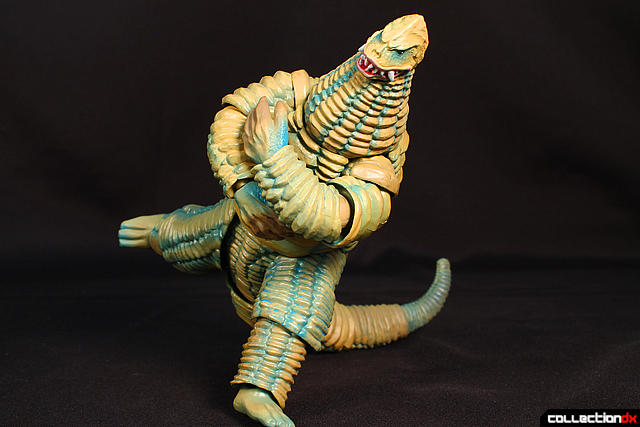 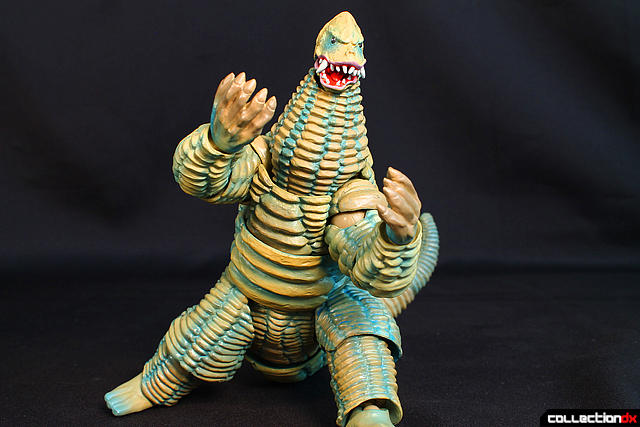 The tail also gets its fair share of articulation. It has the ability to straighten out and curl up a good amount. 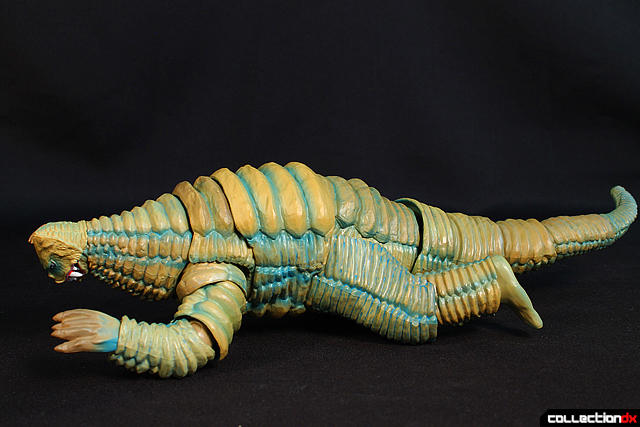 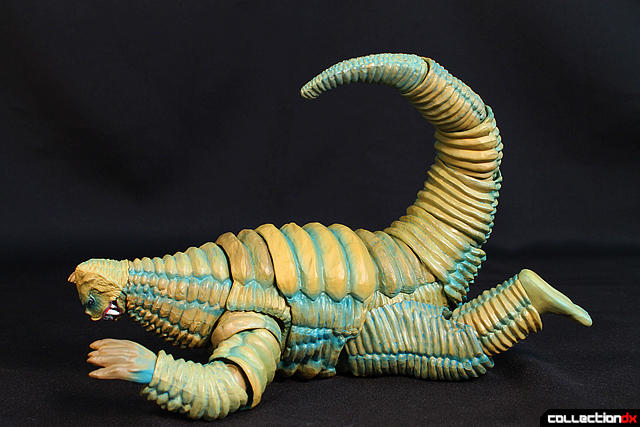 As far as accessories go, he comes with a ground stomp effect... 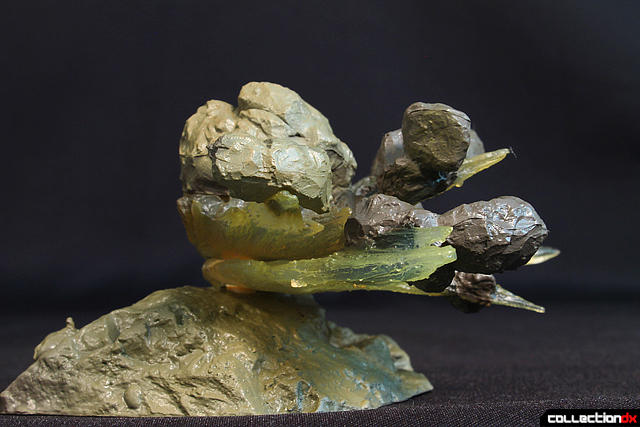 ...and his favorite weapon of choice. A boulder. 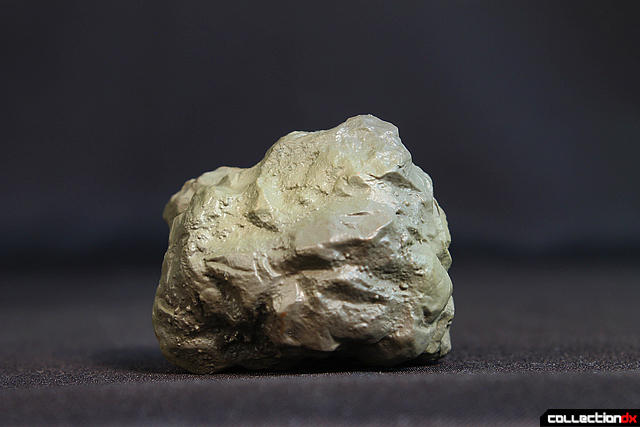 To use the boulder, you need to swap out his standard hands for the alternate hands included in the set. The right hand has a peg that allows the boulder to peg in leaving the other hand pegless in case you want to lob boulders with only one hand. 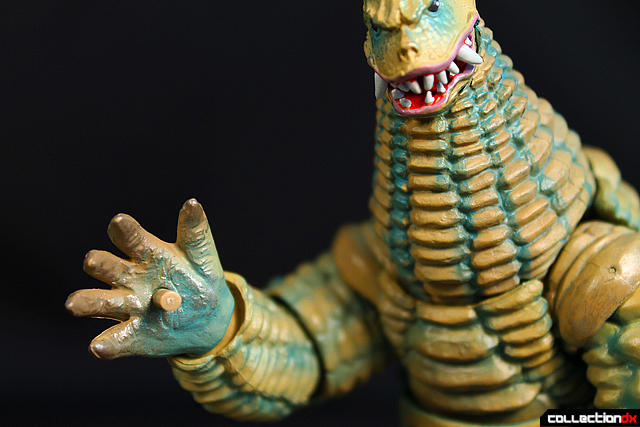 I do prefer using both hands though. 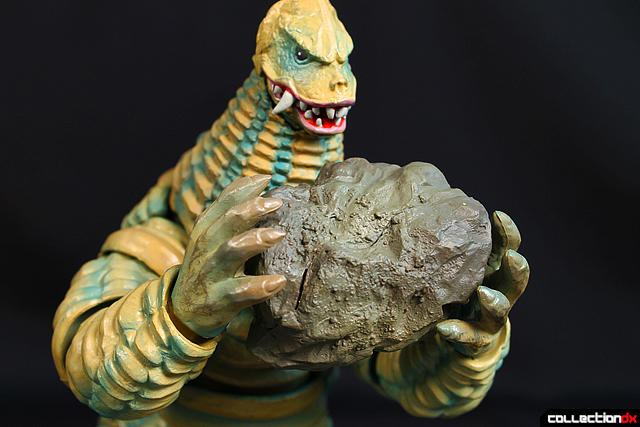 If you wanna have a boulder party, use both at the same time. 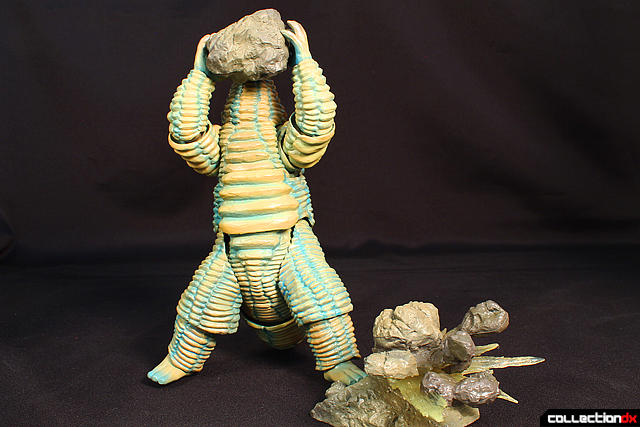 Red King can sometimes get excited and wave his arms around. Especially when Ultraman is around. 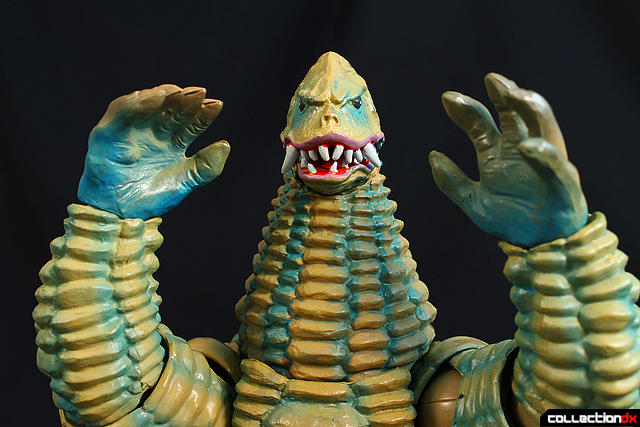 Speaking of Ultraman, here he is for size comparison. This the first release Ultra Act Ultraman. 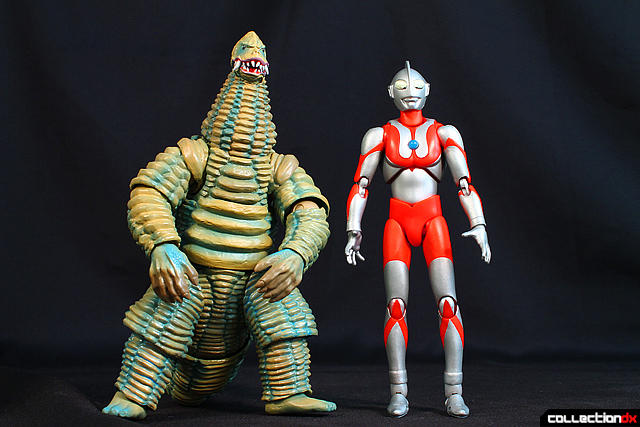 Ok, so let's have some fun by recreating of some of the scenes in episode 8! 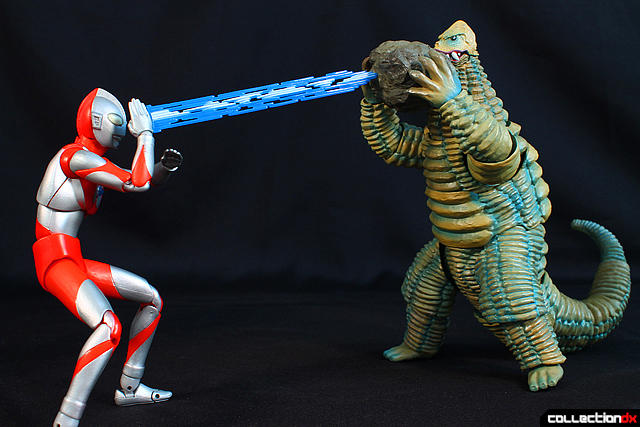 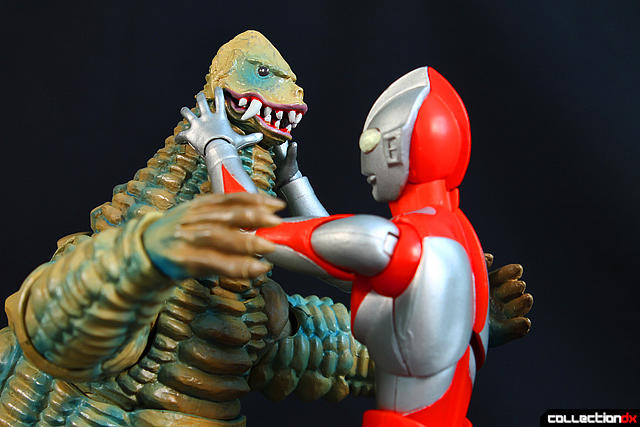 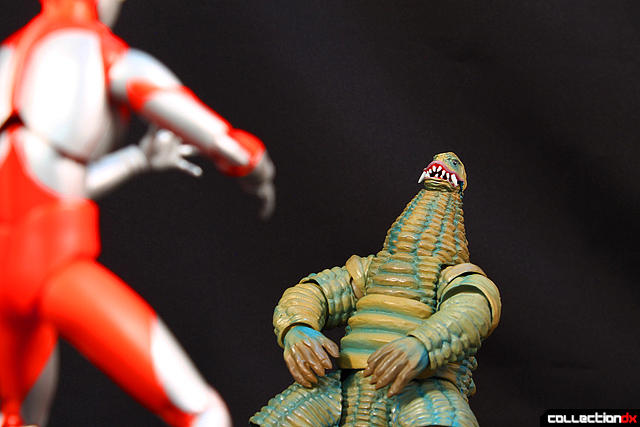 This is right before Red King gets tossed and gets dead. 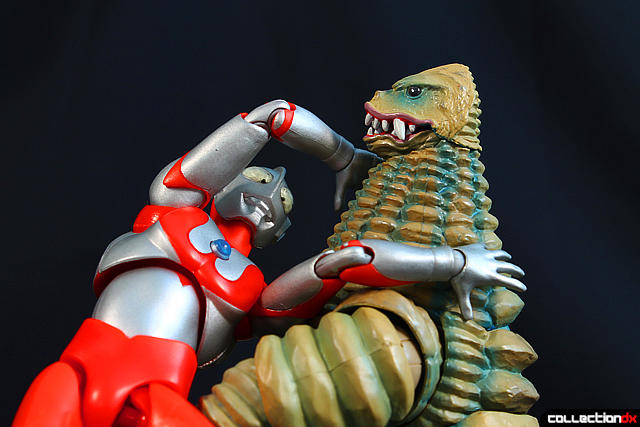 These two last pictures weren't part of the episode, but it goes to show how much fun one can have with these figures. You can invent your own story. 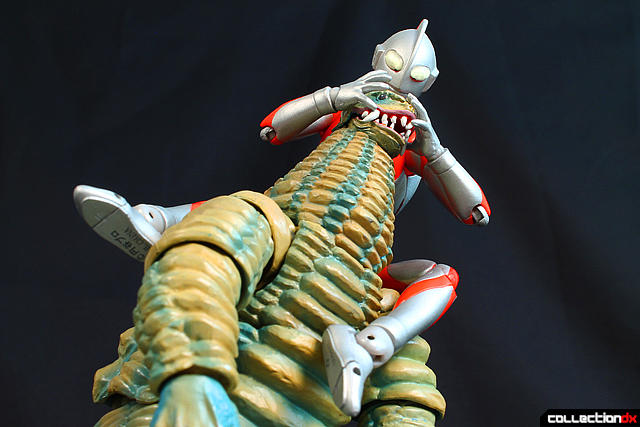 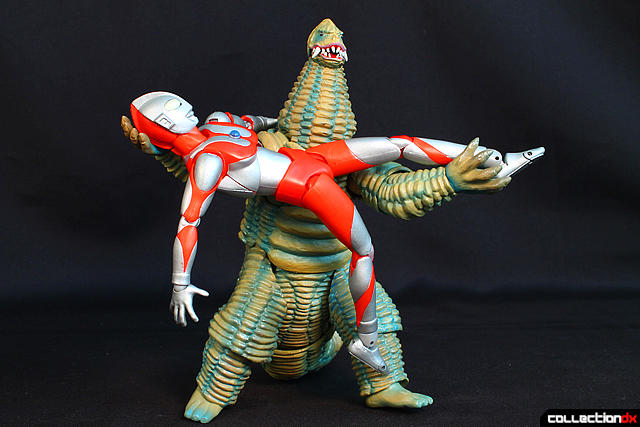 4 comments posted
i always wonder why they

i always wonder why they called him red king even when there is no red on him...

He was red once, but I don't remember which series that was. I made a spoof of him once called green king, and he was red instead of green. Lol

wow, i'd love to see a size comparison between SH Fig Godzilla and this.

Is the Ultra Act series similar to the MonsterArts/FigureArts line?