I originally wanted to sneak in my review of the ES Gokin 09 Gaiking before doing this review for the ES 10. However, due to time, housing and internet constraints, I will have to do this backwards and instead bring you the later release first. To take advantage of what these releases offer, you will need to invest in both the 09 and 10 sets.

So without further ado, I present to you the newest offering in the ES Gokin line. Raiking and Balking! They come in the standard stiff and glossy cardboard box with eye-catching graphics just like the rest of the ES Gokin line. However, this set comes with a partial sleeve that shows the alternate gold-plated accessories. 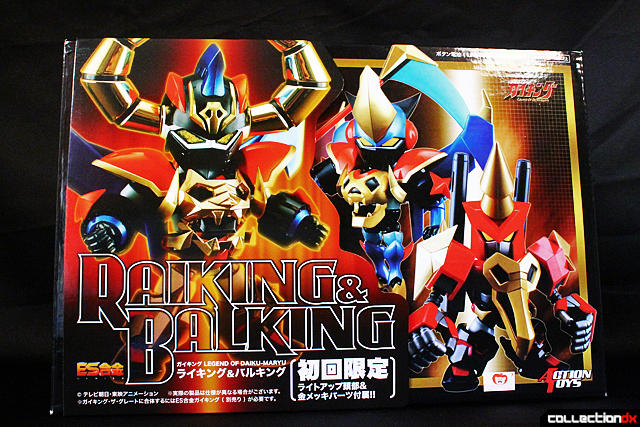 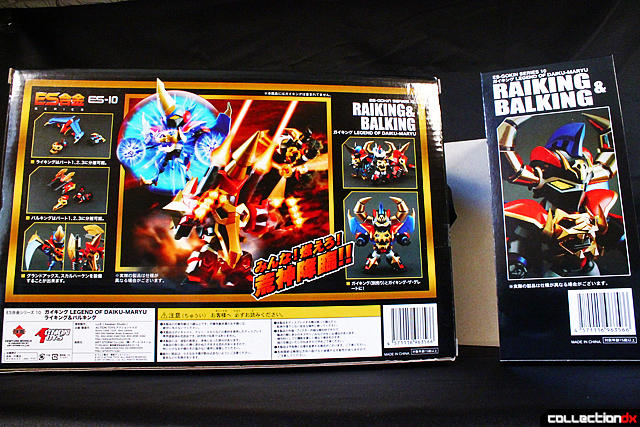 Inside you get a series of trays that hold the figures, accessories, and display stands. 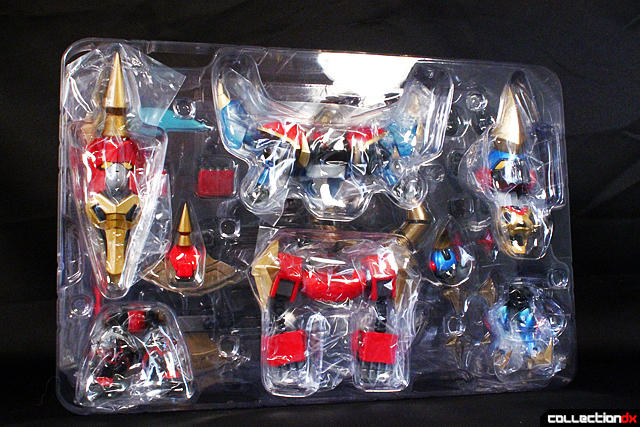 First up is Raiking. The majority of his color scheme is blue with gold and red accents. The bulk of his proportions make up his upper body, but the added weight of his diecast lower half evens it out a bit. I was afraid that his little skinny legs and his knife-edged feet would cause a balancing situation, but surprisingly, he stood on his own very well. Should yours not want to stand, there is an included display stand. 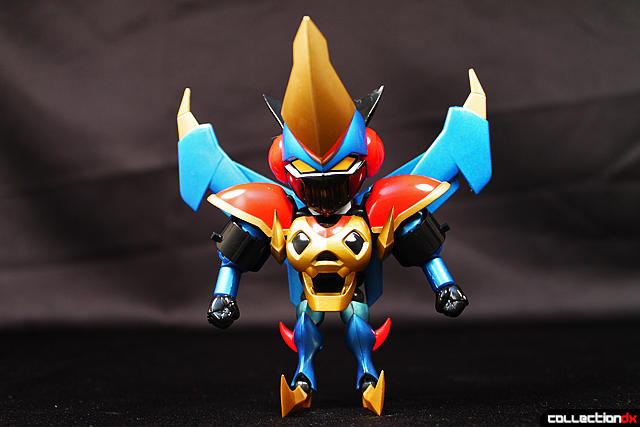 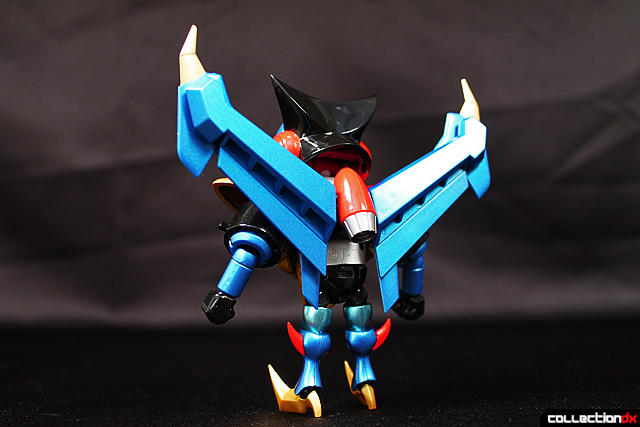 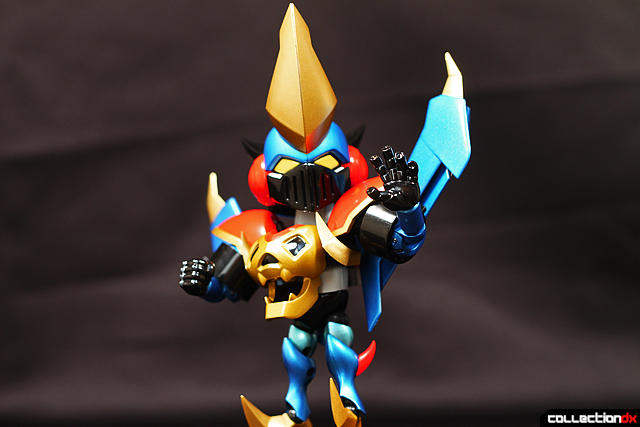 The only diecast part of his upper body would be in the Dragon Face on his chest. The jaws on the Dragon Face are articulated.This picture leaves me wanting an LED feature which unfortunately is not available on this figure. 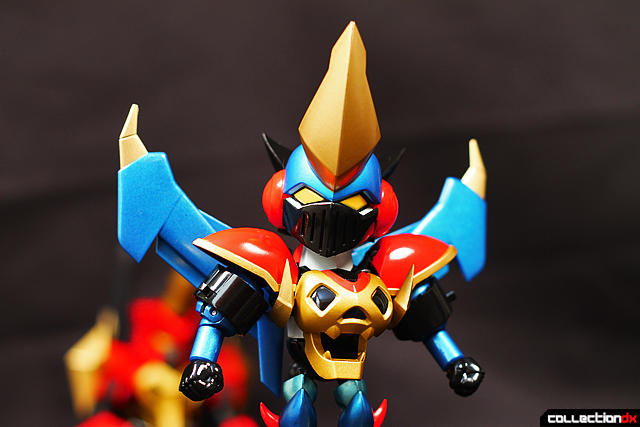 The included alernate hands allow you to create some of his poses like this one. Unfortunately, there are no effect gimmicks to complete the look. Also included are karate-chop type hands, open hands and weapon-holding hands. These hands are also the same hands used for Gaiking the great. 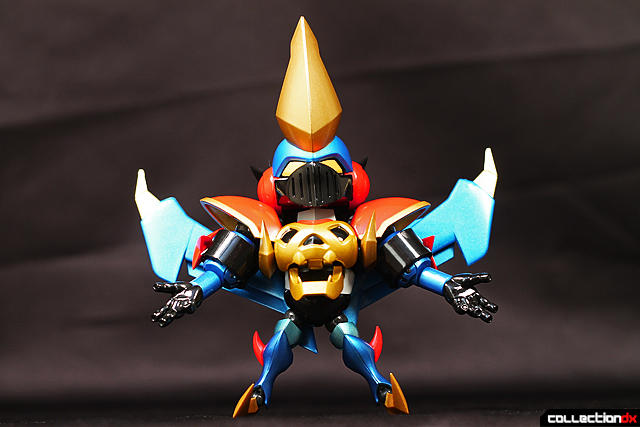 Raiking has a sickle that requires his alternate hands for use. The end of the weapon comes off to allow easy insertion of the weapon into his hands. No more ripping your palms open with pointy toy weapons. 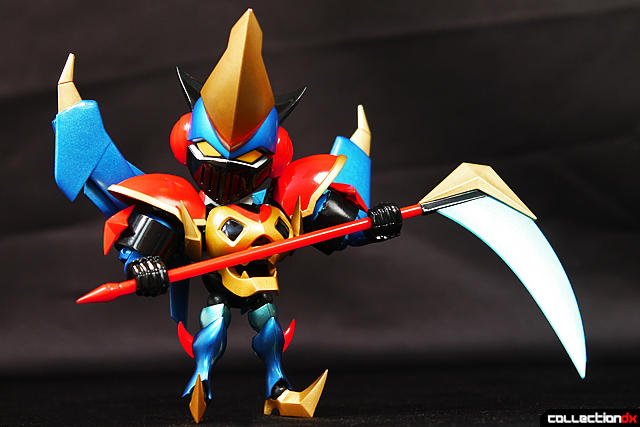 Raiking comes apart to create three different ships. The big head needs to be swapped for a smaller alternate piece. Only very slight positioning differences are needed to create these ships. Very very basic. Just take him apart and you are pretty much done. 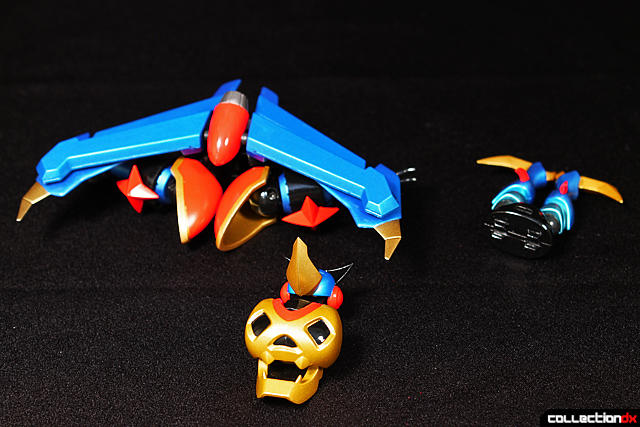 Balking's color scheme is of the reddish variety. While not as colorful as Raiking, I do like his blockyness. His huge blocky hands remind me of another character I can't seem to put my finger on. 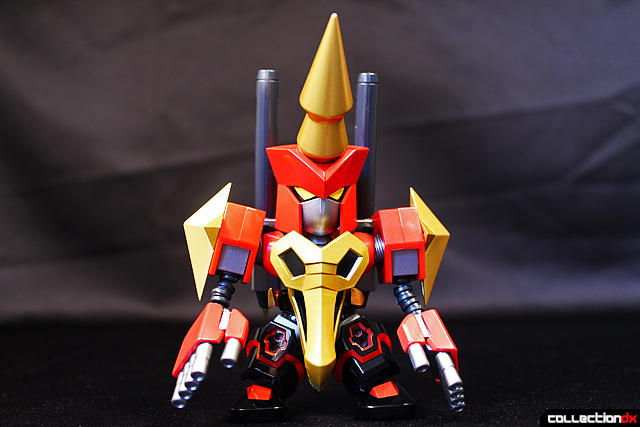 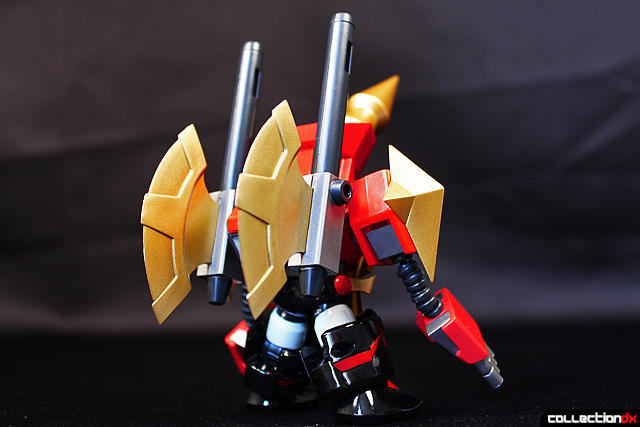 Balking has the most generous amount of diecast. His Dragon Face is diecast as is the whole entire lower half of his body which makes sense since his lower body forms the lower half of Gaiking the Great. The jaws on the Dragon Face are articulated. Again, no LED feature on this guy. 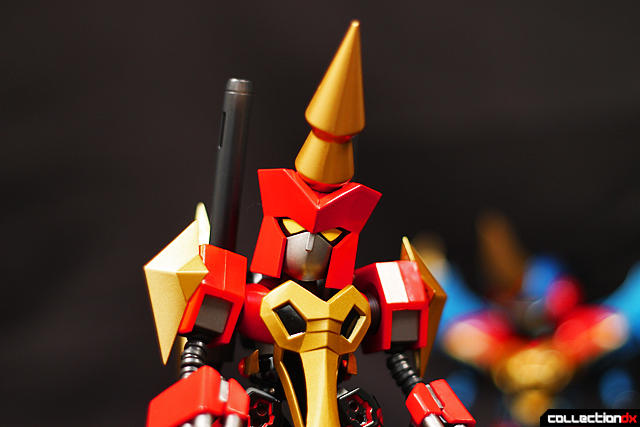 Balking only has one set of alternate hands which are used to hold his weapons that are conveniently stored on his back. The back cannons come off to form an axe he can wield or lay on his shoulder to look cool. 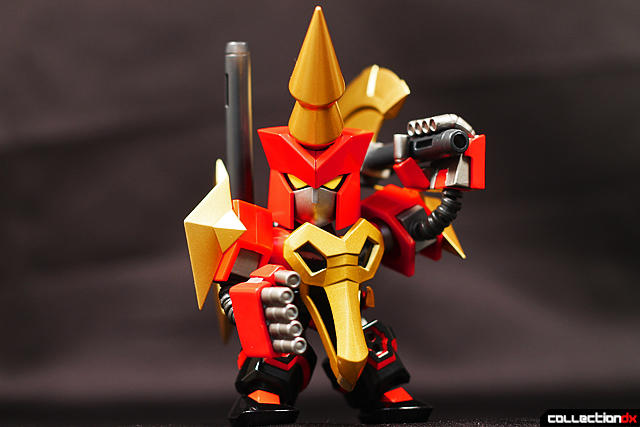 Or just keep the axes on his back to use them as cannons and position his hands out for maximum firepower! Fire effect would do wonders for this pose. 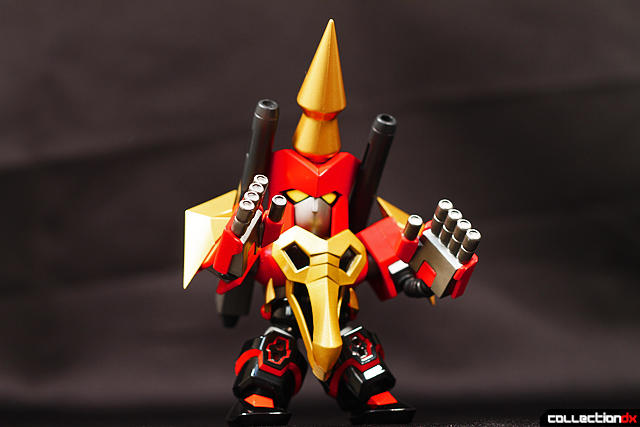 Just like Raiking, Balking comes apart to form three ships. This feature is a tad more involved than Raiking and requires some part swapping. Again, its pretty much just the three parts just laying down. 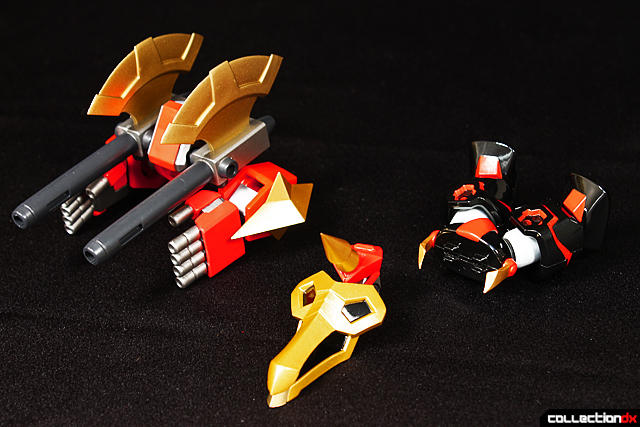 COMBINE WITH GAIKING TO FORM GAIKING THE GREAT!

It seems a bit weird to just go ahead and show you the combination without having done a proper review for Gaiking which is the release prior to this, but that will come later.

So first, get your Gaiking out. If you don't have Gaiking, grab your wallet and order one. You will need it for this. 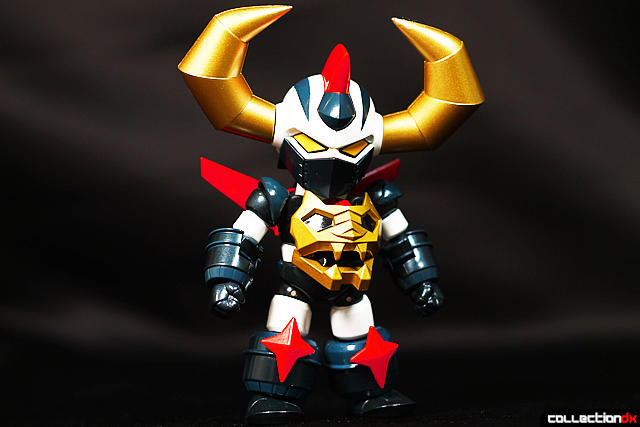 Then, take apart all the figures and rearrange the parts as required to form Gaiking the Great! The Raiking and Balking set comes with expanded horns, a helmet, and an alternate head that is identical to the regular Gaiking head. 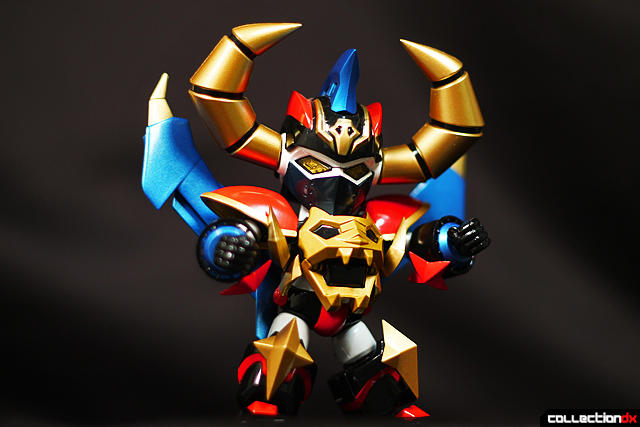 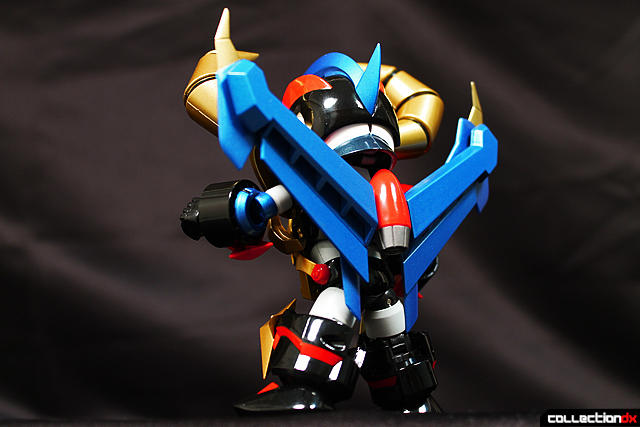 It's identical except for, oh I don't know... the LED FEATURE! 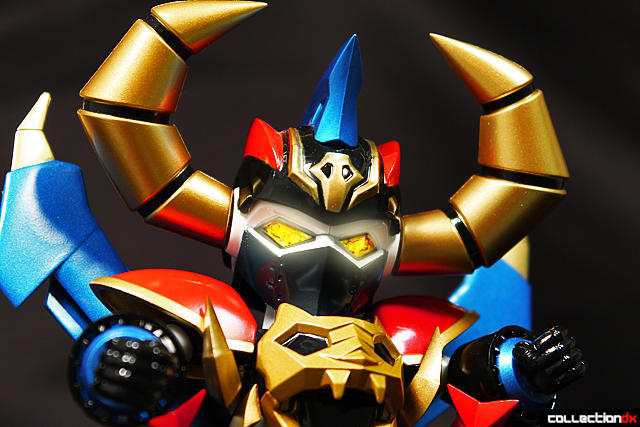 I don't know the reason for not including the LED feature with the original Gaiking head to begin with instead of holding off and making you pay for another head. The LED feature feels like an afterthought or was done with keeping costs at a minimum in mind because the batteries (not included) don't even have a proper housing. It comes with what is essentially a teeny cup without a bottom. Two batteries go in there and you slide it into the slot in the back of the head. Very strange design. There isnt even proper polarity tabs, just a couple of wire leads sticking out. 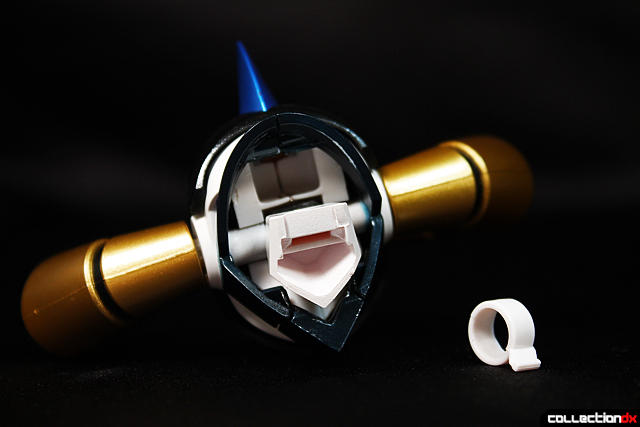 A welcome addition to the set are these classy alternate gold parts which consist of horns and Counter Crosses which attach to his knees. 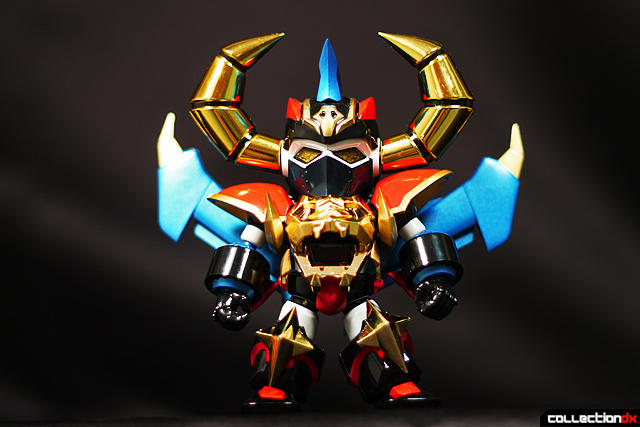 The wings can expand a good deal by ratcheting out the ends. 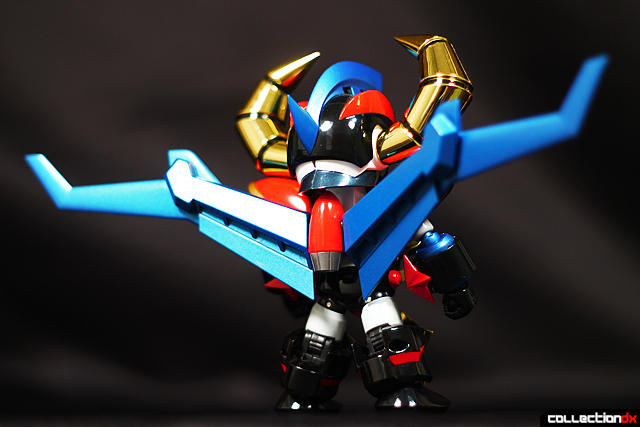 I was happy enough with my Gaiking set but the addition of Raiking and Balking threw this over the top. The figures on their own were well balanced for combining figures and moreso when combined as Gaiking the Great which keeps all of the weight down low. It looks great amongst all the other SD gokin, especially with the gold -plated horns. After forming Gaiking the Great, you should have enough parts left over to form a hybrid figure. Look to spend over $200 for the set of three. While I didn't discuss the quality of the figure, I found no issues with the set and quality is what you would expect from Artstorm.

For more on this set, please check out this video of the Raiking and Balking set. Gaiking the Great will be shown in video form in the upcoming Gaiking review. Stay tuned

Great review! I had these two and Gaiking on preorder but I cancelled because of $ stuff and a weird idea that I needed to focus my collecting. Your pics are making me regret that decision. As far as SD stuff is concerned I have the Robot Spirits Ryuoh Maru and I thought it was an okay, fun toy. In your opinion are these head and shoulders better? The combining into Gaiking the Great is a fantastic hook.