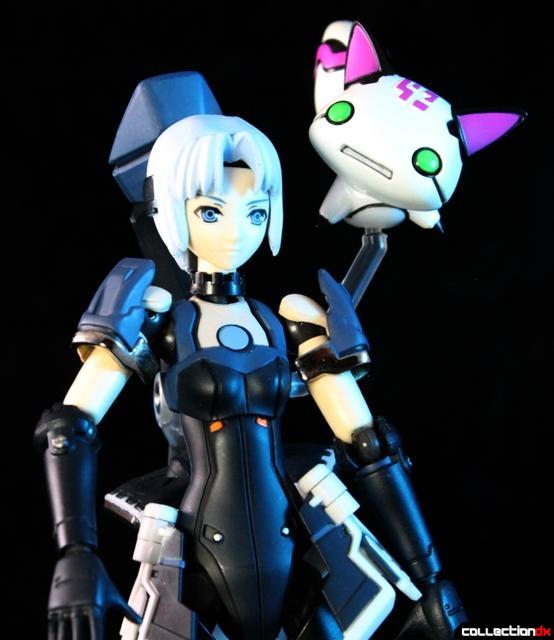 Bandai has a long history of doing Black re-colors on many of their Chogokin offerings going back to the Popy days. They tend to range from wildly popular to more or less treated dismissively by fans. Today we are here to talk about one of their more obscure black offerings. The RAcaseal Ver. Black Eleanor Camuel, from Phantasy Star Online. 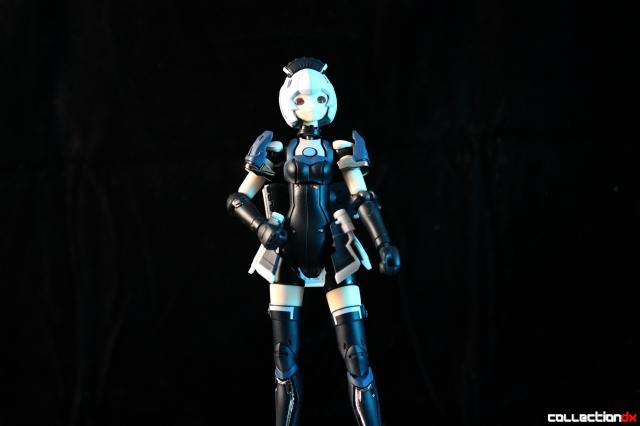 This is one of Bandai’s more unusual re-color offerings. While the figure itself is essentially nearly physically identical to the earlier and far more common Pink RAcaseal, so well documented and reviewed by Dkun. What is in the box is so different and so character defining so as to turn the variant figure into an entirely different character and offering. 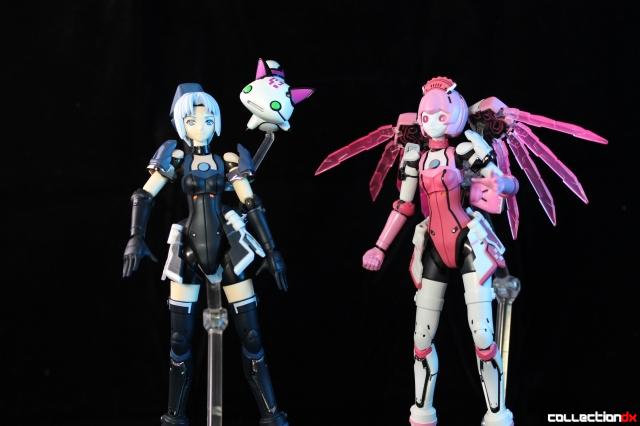 Let’s start with the packaging 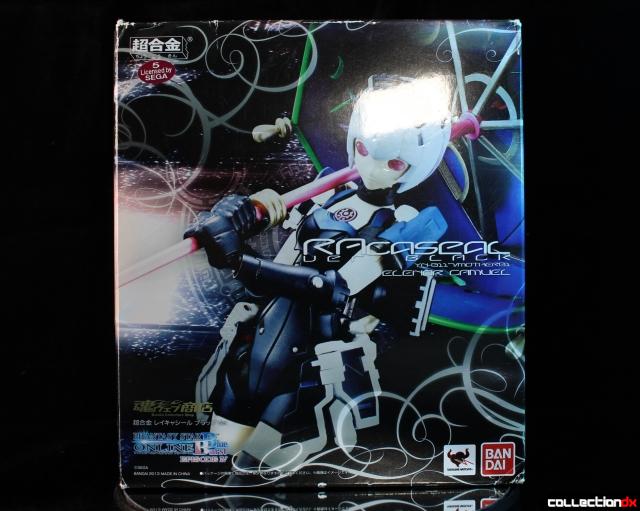 The box is a nice typical Bandai photo box. While appearing Black and White at first, it is in fact a full color picture. It’s just the figure itself is very very black and white. On it we can see Eleanor holding one of her signature items. Her bright blue Umbrella. 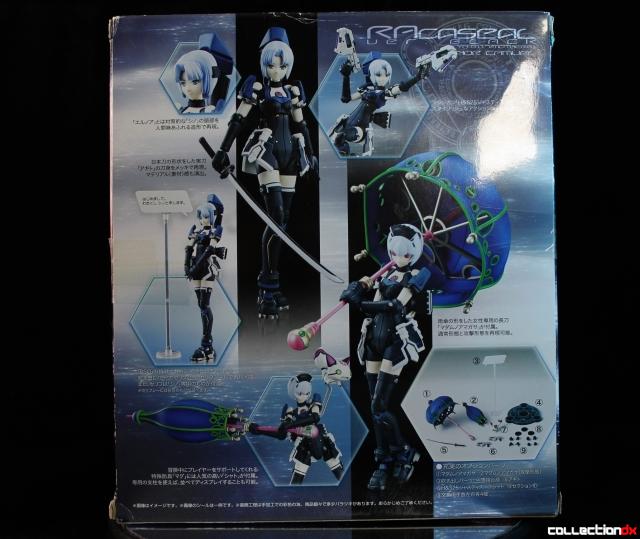 The back of the box lays out what is inside rather nicely. And you can get a pretty good overview as to what the differences between the Pink and Black versions are just from it. She includes the same standard PSO style Tamashii stand, with the stickers to customize it and the speech bubble placard with stand and stickers, which are found in the standard Pink RAcaseal. And that is the beginning and end to shared pieces between the two figures. 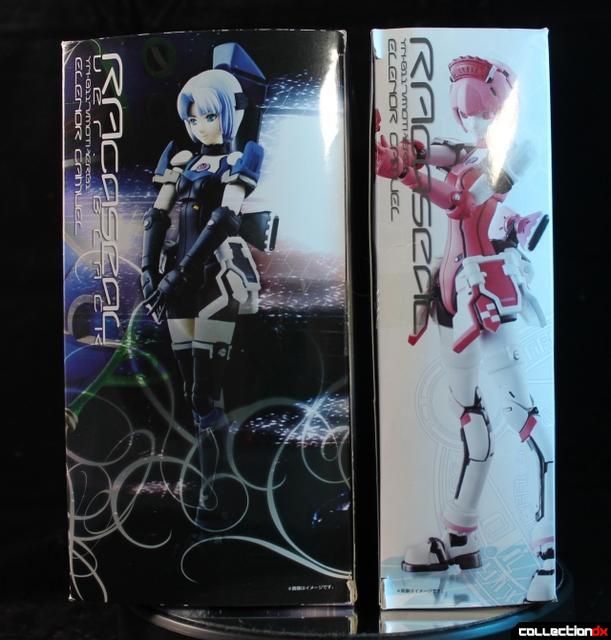 As you can see from the comparison view, the box of the Black is almost twice the thickness of the Standard version. Weirdly and almost counter intuitively the Black has substantially fewer accessories than the Pink. It’s just what she has is much larger. 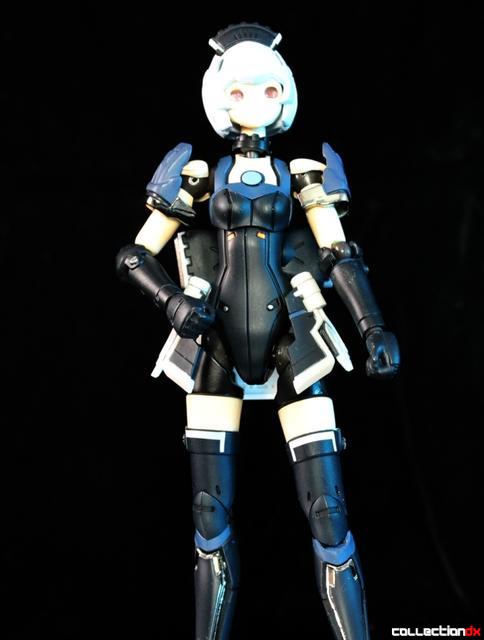 The figure itself as it comes out of the box is the exact same sculpt and frame as the standard offering. With all of that figures delightfully smooth articulation and weighty heft of Die cast. She moves like a SHFiguarts but with the stability of Die cast Metal.

Note the scale of the RAcaseals is slightly larger than SHFA’s. I would place the Chogokin Eleanor’s at about 1/10 as opposed to the Figuarts 1/12. (Do not attempt to seat these figure in one of those flimsy little Figma 1/12 chairs. Results will not be pretty.)

Out of the box she comes with her standard Android Maid head attached. It has the same delightfully unearthly reflective pink eyes found on the Standard version. Black otherwise differs substantially from Pink in color scheme. Where the standard Pink has an almost white, clearly robotic skin tone, Black’s is much more of a human flesh skin tone. Why that is will become apparent later on.

The bulk of her outfit is a satin finish black, with just a touch of sheen. Highlights are in a dark bluish grey. Where the Pink figure has dark almost black chrome highlights this one has dark gold chrome bordering on bronze. Her hair is a bluish white. 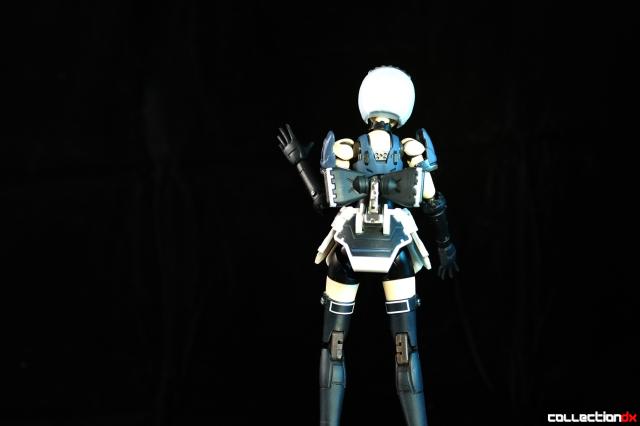 From the back the overall black theme continues. Her bow/thrusters are black with white trim. The overall impression one gets from the figure is one of “every possible fetish given form”. She’s like a Goth Mary Poppins Robot Maid. Her bow moves out of the way and there is a Tamashii stand port behind it. This is also where her Mag attaches. A word of advice. Her skirt is attached via a ball joint just below the stand port. When attaching the Mag or a stand, remove the skirt first, attach the Mag support, then put the skirt back on. Trying to wrestle the connector in place behind the bow and skirt is a royal and unnecessary pain. 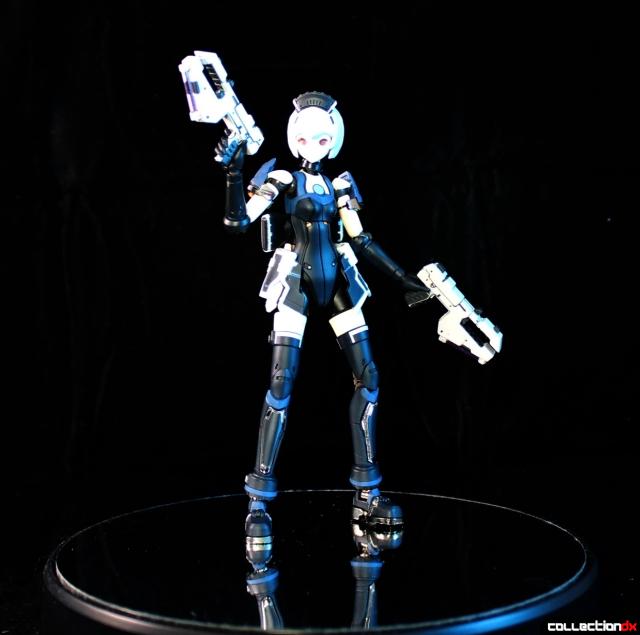 So let’s look at some armaments! Unlike her Pink sister this Eleanor is NOT a Sniper. She has a pair of kick ass blaster pistols that she 2 fists like a Goth Gangster. They are wonderfully detailed with lots of painted details and clear pink power cells along the bottom. Unlike the Pink’s Sniper Rifle the power cells do not come off these guns. The two guns are identical. 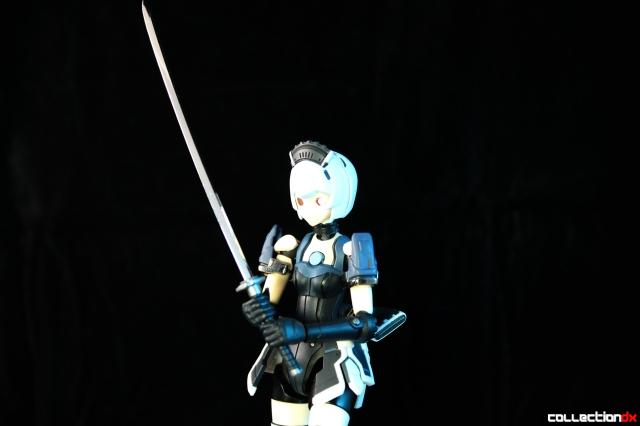 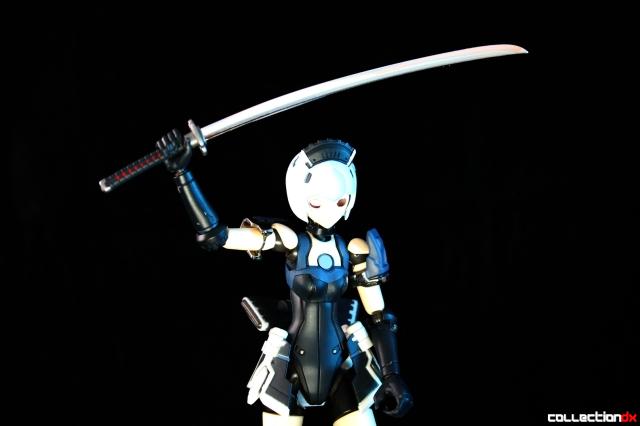 OK so dual wielding pistols not your thing, not a problem. She comes equipped for slicing and dicing. A nicely appointed Samurai Sword. Complete with gorgeous detailing on the hilt. She can nicely 2 hand the sword or hold it well in either hand. Her shoulders have more than enough movement that you should be able to hit any pose you desire. 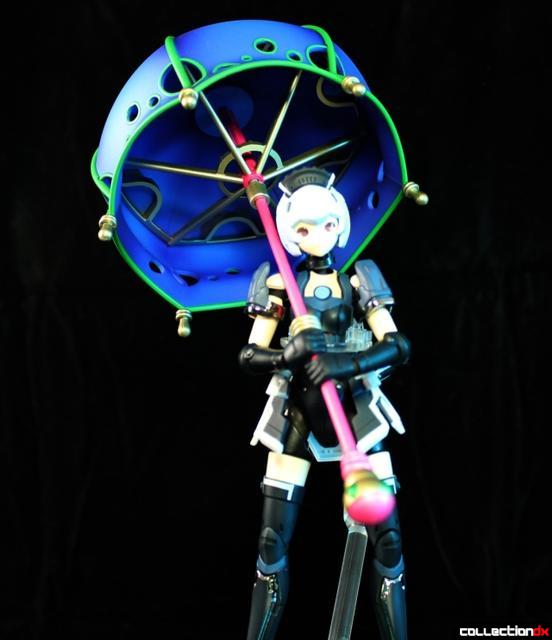 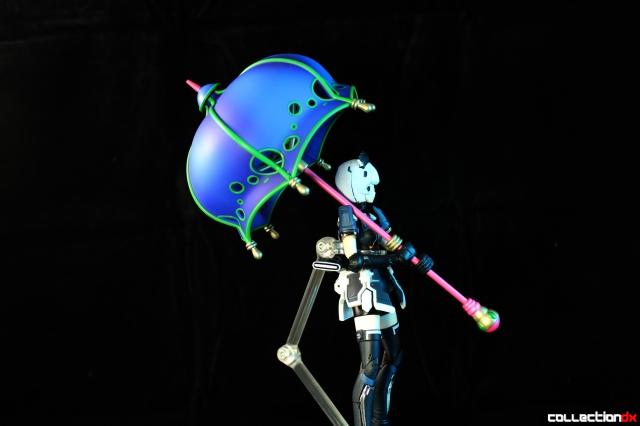 Yeah this is the big showstopper piece that Blackie comes with. Her gorgeous Blue Umbrella. I am unfamiliar with PSO, so I am not aware if this is a weapon? Or simply some character element, or what the deal is? But it looks cool, and is both the sets most distinctive feature, and in some ways it’s most problematic one.

The Umbrella is 3 pieces. The handle which is all metal. The closed Umbrella top. And the open Umbrella top. Both of which are hard painted plastic. You obviously attach whichever top piece you are looking to use to give her that delightful ethereal fantasy air. The problem is it weighs a lot. An awful lot. I did mention that the umbrella shaft is a 6” steel rod, right? You might notice two details from the above pictures. One the Umbrella is resting on her shoulder. And Two, I’ve had to put her on the stand to take the pictures. Her elbow and shoulder joints really can’t handle the weight without some help. And getting her balanced with it without a stand is an exercise in futility. In spite of that it really makes the figure pop. If you have one of these, chances are you will be displaying it with the Umbrella. It’s that eye catching. It turns the character from a slightly creepy murderous goth maid into something from Disneyland.

I still have no idea if this is supposed to be a weapon, or how it would be used? 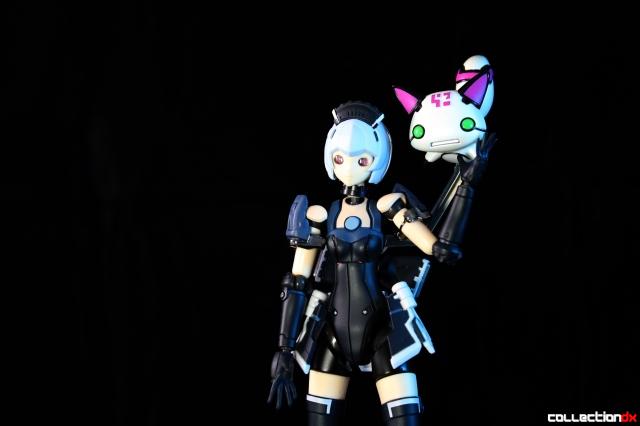 Black Eleanor also comes with her own distinct and unique Mag. Instead of Pinky’s Baby Mag or her Angel Wings, Black comes with this rather adorable Pink and White Cat/Fox/Raccoon thing. It attaches via a clear flight piece that plugs into her stand port. The clear piece has a pass-through port to allow the stand to attach to it.

The Mag is a little delight. His tail is articulated and his head swivels. Permitting him to be quite expressive. 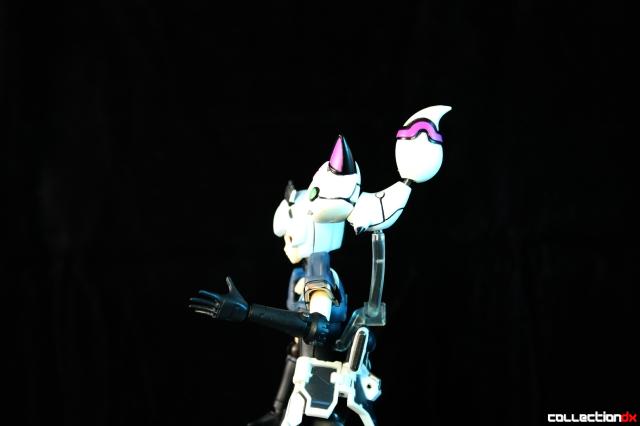 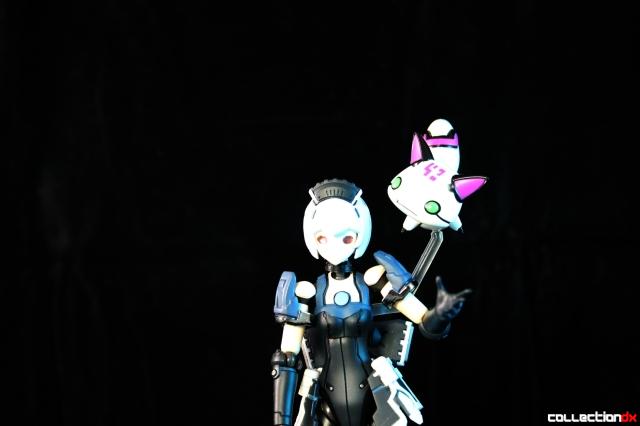 By the way. That pass through Mag connector is by far the most stable way to put Black Eleanor on the stand. No question about it. There is not really enough room behind her bow to directly attach the Tamashii stand arm, and the included grabber claw piece to the stand is really too big for the figure. This is a problem common with many Bandai female figures. They come with the standard stand clamp parts that are meant for the male figures. If you wish to use the waist grabbling clamp, switch out the curved grabber arm pieces with a pair of smaller ones from a Tamashii Stage 4 set.

And now we come to the truly unique and standout feature of the set. Her human head. 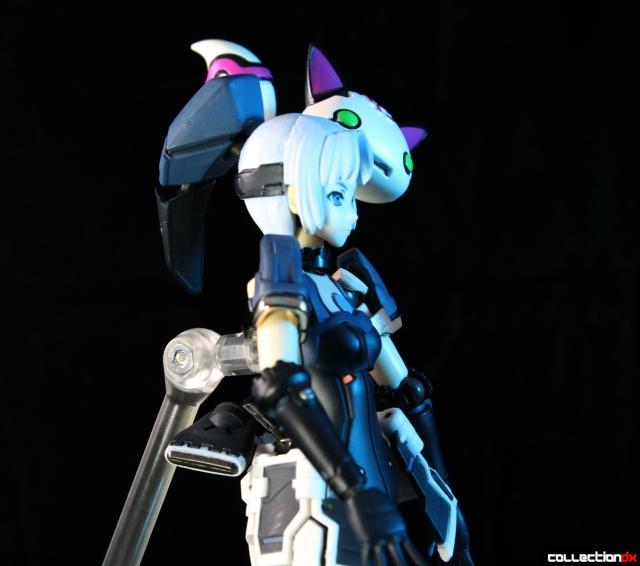 And what a nice head it is. Instead of the standard Android face and maid hair it has a nice smiling human face, with incredibly painted blue eyes. Her alternate hair is a set of loosely combed blue white bangs with some sort of high tech pony tail. The boxy pony tail actually has several points of articulation. Swapping out the face and head turns Black Version Eleanor into an entirely different and unique character. 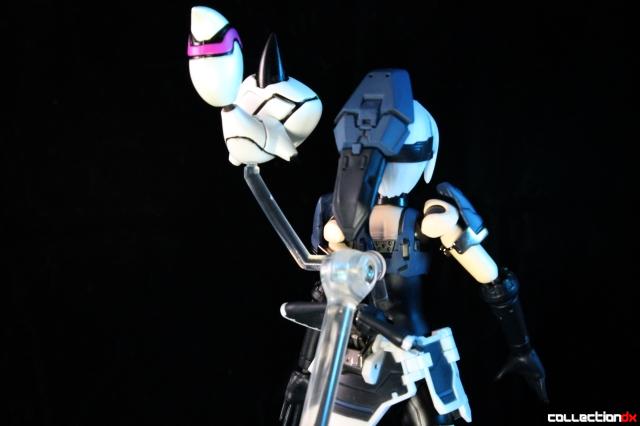 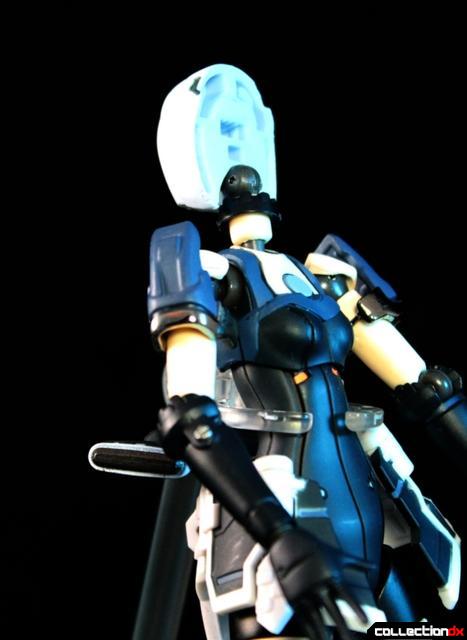 IMPORTANT! Swapping the head is a little trickier than you might think. Do not pull straight up on the head. It is not on a typical ball joint. To change heads you must remove the bangs and face. Once those are off the rear part of the head pulls backwards. The head sits on an L shaped Ball Hinge. One post of the hinge is the neck. The other points straight back, towards the back of the head. Do not just grab and pull!

Each head is three pieces. Bangs, Face and Back. They may be mixed and matched however you may wish.

They can also be swapped with the Pink version. But they will look weird with that figures pure white skin tones. 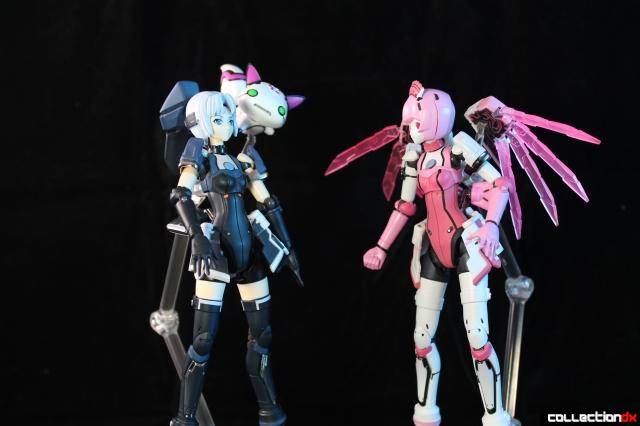 Overall this is a fantastic figure. Stunning articulation and more than enough distinctiveness to set it apart from the original offering, and make it something other than a re-color variant. It looks gorgeous in any collection, and compliments the pink variant nicely. The biggest problem is preventing your wife from stealing it along with your Pink version.

That is not to say it is without flaws. I mentioned the weight issue with the signature Umbrella. Not insurmountable, but does require a bit of careful posing. The other negative is not so much a technical issue as it is the things that this set lacks. Namely a few of the non weapon accessories included in the Standard Pink set. Things not included with Black are the little gems on stands, the red treasure box. And most importantly the large storage box to hold all the extras. The lack of that storage box is really the most noticeable absence. Granted the only things in this set that would fit in it are the hands and pistols. But it would be nice to have someplace to attach the sword. Or maybe at least a scabbard? By and large these are minor nitpicks. It’s a really solid figure. An obscure and almost unmentioned gem from Bandai’s more irregular Chogokin lineup. Something that would be a great addition to anyone’s robot or action figure collection.

Great review! As a PSO loving guy I can happily elaborate on some of her accessories.

Her alternate head makes her look more like Shino who's from a famous quest line in the game. This is also why she comes with those two particular pistols which are the ones shes uses in her quest. The sword she comes with is probably in reference to her master Zoke Miyama.

The Mag she comes with is specifically a Sato, and the umbrella is the rare weapon Madam's Umbrella which is only usable by female character in game. Pretty cute to include though!