Kiryu appears thanks to our friends at Bluefin Tamashii Nations. You can get your hands on this mechanical giant over at Amazon.com.

Kiryu is the Mechagodzilla of the Millennium Godzilla series.  First appearing in the Godzilla Against Mechagodzilla movie, this massive metal Godzilla’s origins are actually tied to the original Godzilla film. After Dr. Serizawa defeats the original Godzilla with the Oxygen Destroyer, only the bones of Godzilla remain as a testament to the first kaiju that terrorized Japan.  But that was not the end of humanity’s woes.  It soon found itself under attack by many more monsters. Eventually, even a new Godzilla appeared to terrorize Tokyo.
In order to face the new threat, the Anti-Megalosaurus Force proposed that a new weapon be built using the skeleton and DNA of the original Godzilla.  With the impending threat of the new Godzilla, plans were approved for the construction of the mechanical Godzilla.  And that is how Kiryu came to be.
Now Bandai has decided introduce this iconic iteration of Mechagodzilla in the S.H. Monsterarts line.

Kiryu comes packed in its base form and you have to attach its flight pack and arm-mounted double lasers. 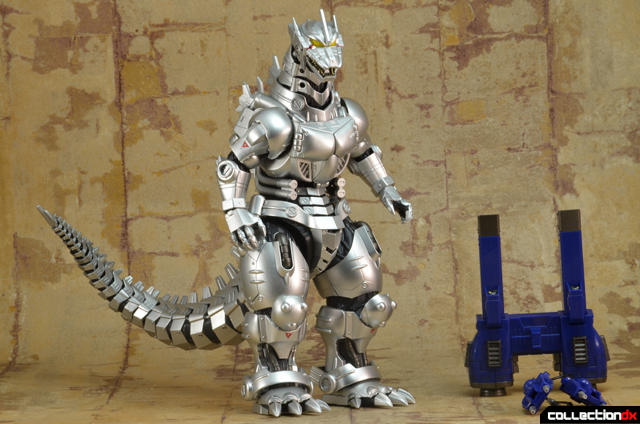 The flight pack is attached by removing couple of the fins on the back and snapping the flight pack's pegs into the holes. The double lasers attach to the indentations on the forearms and their cables plug into the elbows, which have silver pegs that must first be removed. 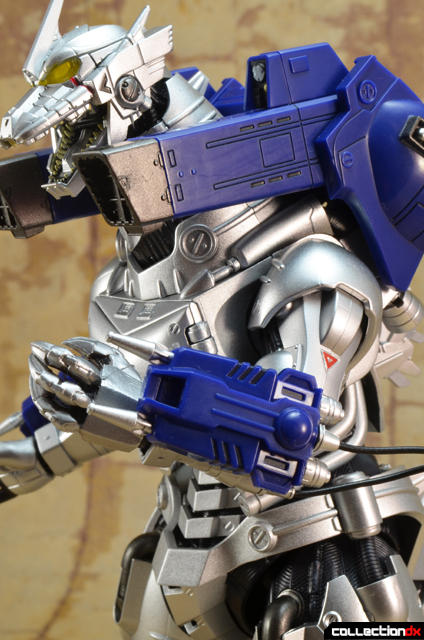 The S.H. Monsterarts Kiryu looks pretty damn good, but is not a flawless rendition of this mechanical beast. 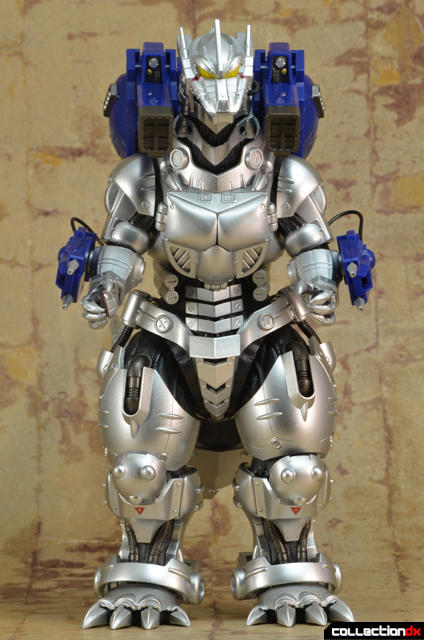 The S.H.  Monsterarts version is a bit slimmer than its film counterpart.  Even Kiryu’s thunder thighs are even less thunderous on the S.H. Mosnterarts version.  One can only guess that toy’s design is leaner due to the fact that it is not a suit that would have to be worn by a person. 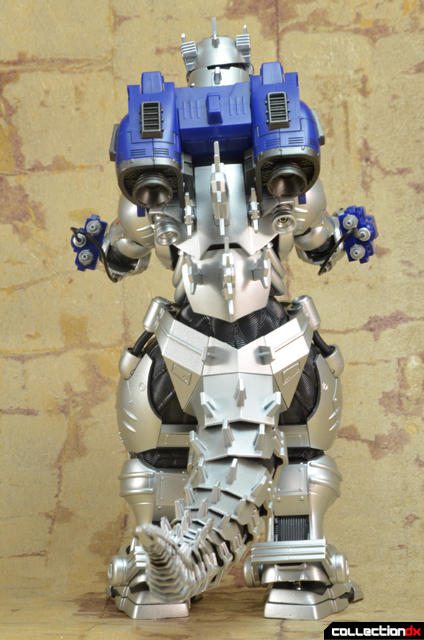 But despite Kiryu’s sleeker physique, all of the details are present on this toy from the fin on its head to its deadly spiked tail. You can even see the wires and the black muscle-like material under the plates of armor. It is just a beautiful toy through and through. 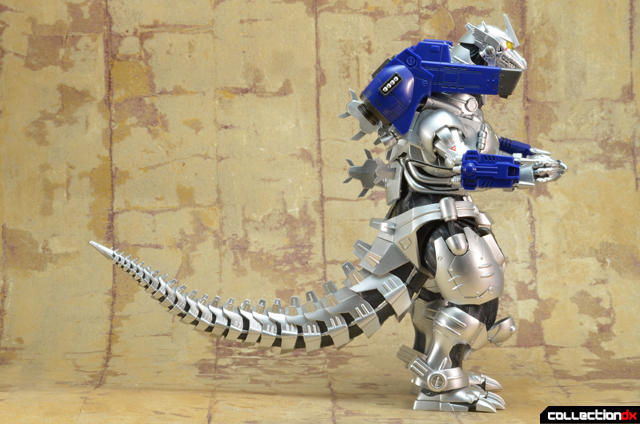 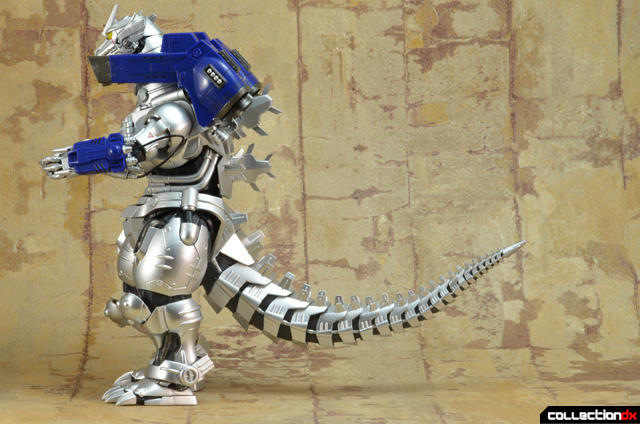 Even the head is wonderfully sculpted and detailed. 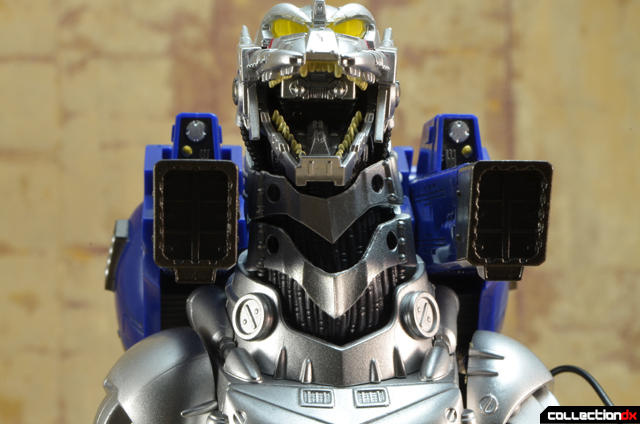 Just look at the inside of the mouth with its masers and the organic teeth. The paint job is equally as wonderful.  Kiryu’s teeth don’t have any paint from the other parts mouth bleeding onto the teeth.
Kiryu even has 2 spare head plates to display it in two other states. 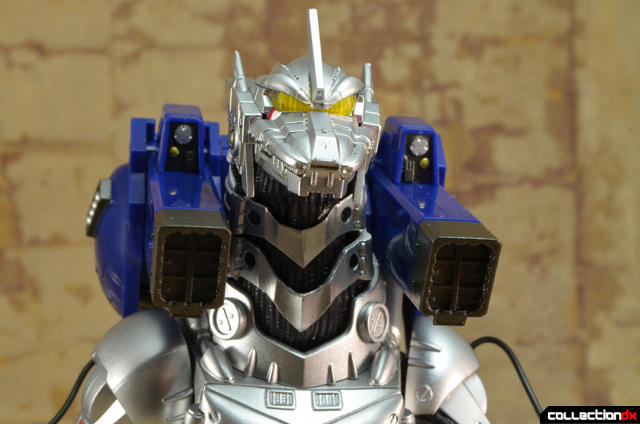 The headpiece with rippling yellow eyes are for Kiryu’s stand-by mode. 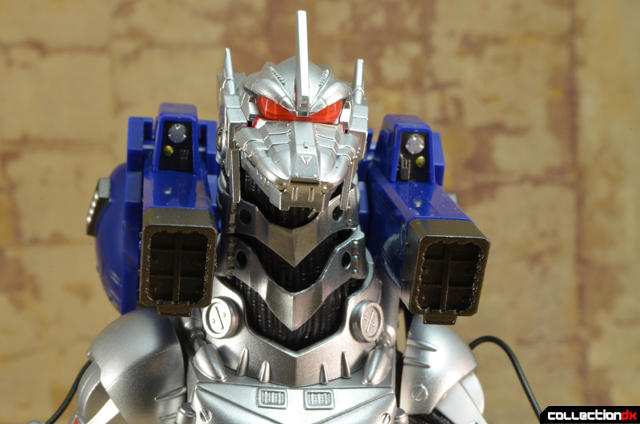 More importantly, the head plate with the red eyes give the face the menacing look necessary to display the toy in its “evil” mode. 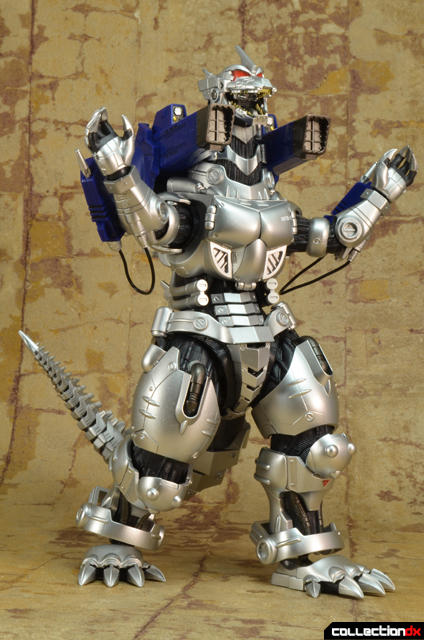 Articulation is good for the most part.
Starting at the top, there are three ball joints for moving the head and neck of Kiryu. There is one ball joint at the base of the head, one at the base of the neck and one in the middle of the neck. This provides a decent amount of articulation, which is stifled by the toys aim for accuracy to the source material. There are two cables that run from the sides of Kiryu’s face and into the neck armor. These short cables will pop out if you try to move the head to much vertically or laterally. This doesn’t actually break the toy, but it will result in one or both of the cables dangling over the neck armor.
The torso has a decent amount of motion thanks to a ball joint connecting the chest with the abs. 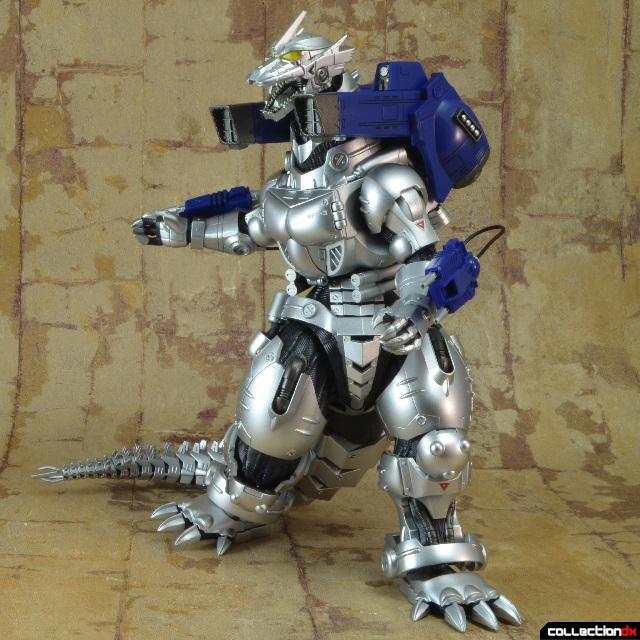 The body panel around midsection moves independently from the abs so that it can rotate along with the chest.
The chest also has three panels that open up, to reveal the Absolute Zero cannon. 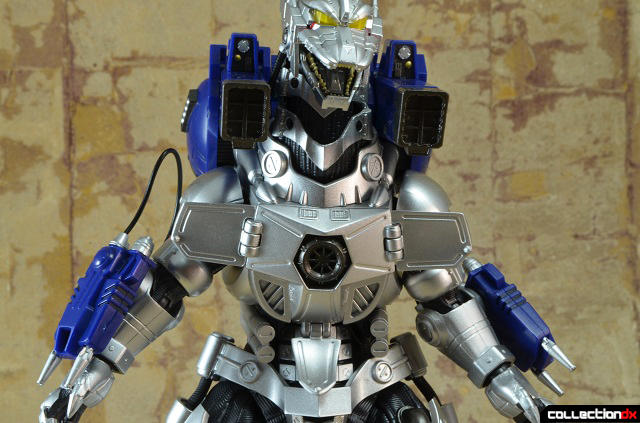 It is really a shame that Bandai did not include an effect part for the Absolute Zero beam.

Imagine how much cooler this picture would look with with a swirling, semi-transparent, blue effect part to showcase this mecha's devastating ultimate attack. 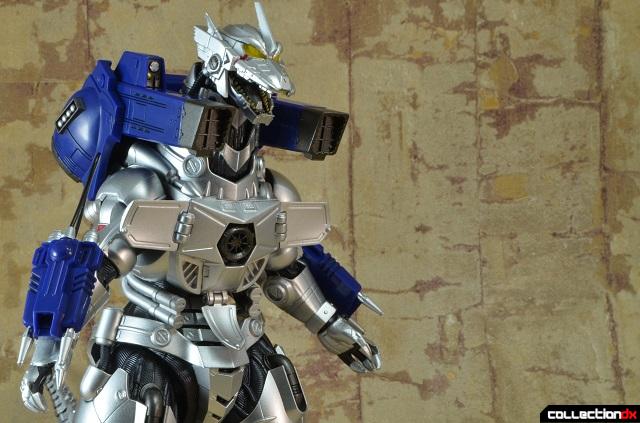 The shoulders are on two ball joints- one in the body and one on the shoulder- this allows Kiryu’s arms to move upwards and also forward and back. 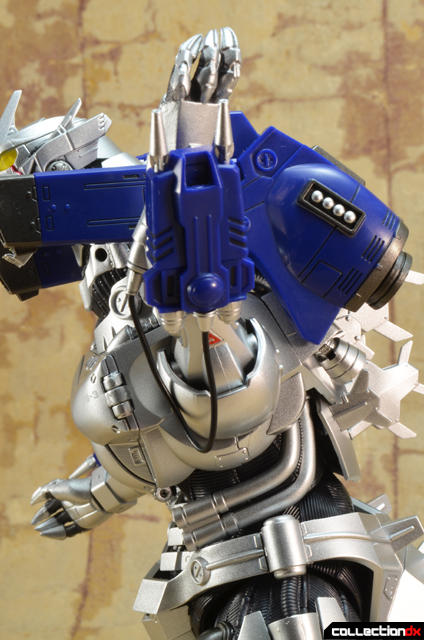 The elbows are double jointed. The wrists, however, have a single ball joint.  Since we are near the hand area, I just wanted to point out that the fingers are made of pvc so you can spread the fingers of the figure a bit. However, the PVC likes going back to its original state. 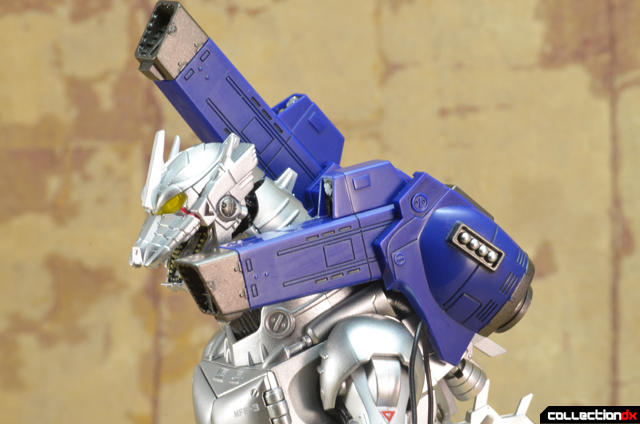 In the upwards position, they lock into place. However, in the forward position they do not. Seems like it should have been the other way around; when the rocket launchers are pointed forward, it can be easy to nudge them out of place.
There is also a ball joint on each of the thighs. 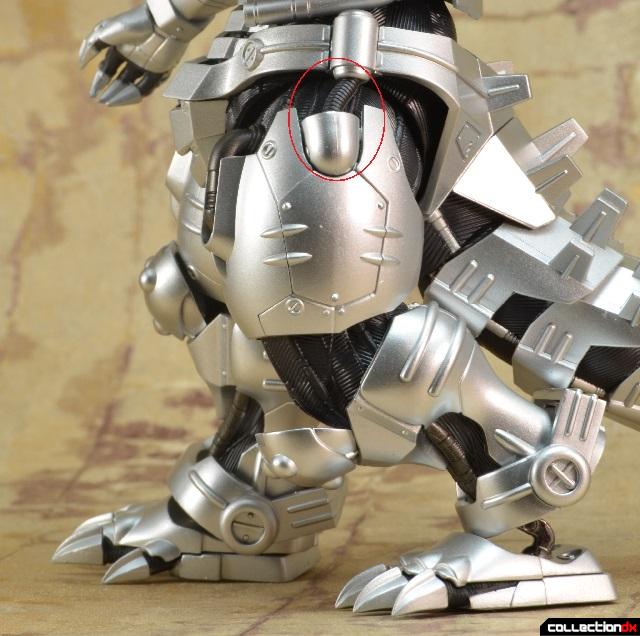 However, the legs cannot move much at the thigh due to the cable that runs from the hip armor to the thigh armor. These little cables are a nice touch of authenticity for the toy, but will snap if you move the thighs too much. So be careful when moving the thighs.

The knee has joint, hidden underneath the rubber sheath. Finally at the feet, there is a ball joint on a hinge that allows the foot to extend out substantially, but it will end up leaving a gap between the foot and the leg. The metal  plates above the feet can also swivel up and down to free up the movement of the feet.

While most of the toy is made of plastic, there is actually a bit of metal content with this release. The chest and feet of the toy are metal. This was probably done to give the toy some extra balance.

Hidden within each of the thighs is a panel that opens up to reveal a thruster. 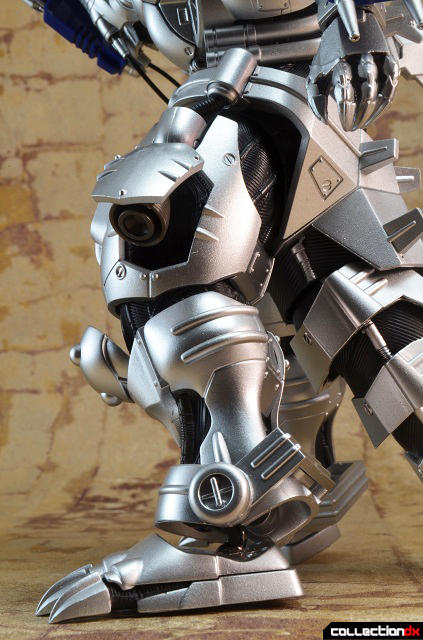 These thrusters do not actually move independently of the panel.  In the movie, these thrusters are used in conjunction with the ones on the back of Kiryu to thrust this massive metal monster into action. 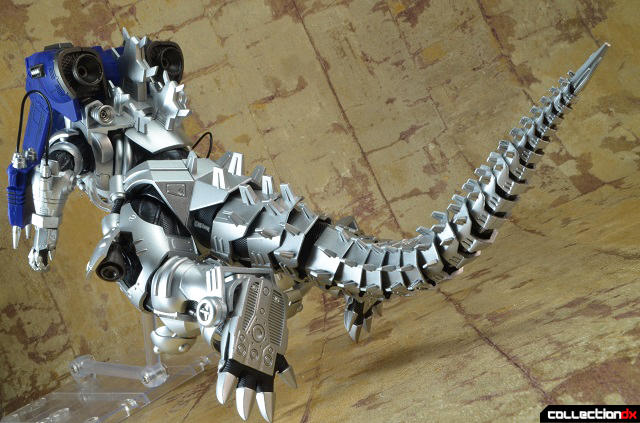 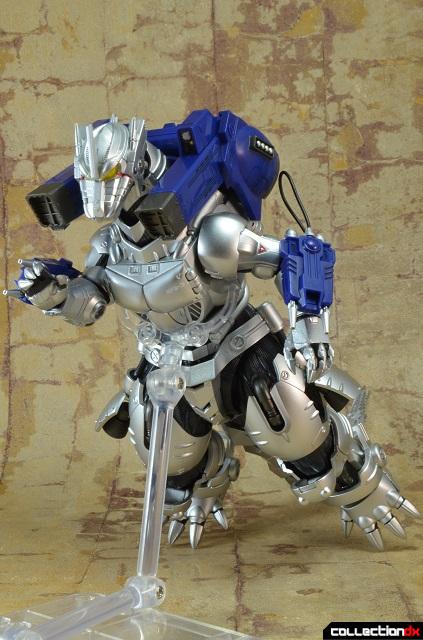 The only thrusters on the toy that are articulated are the small silver ones attached to the back.
Finally, the most articulated and awesome piece of this toy is the tail. 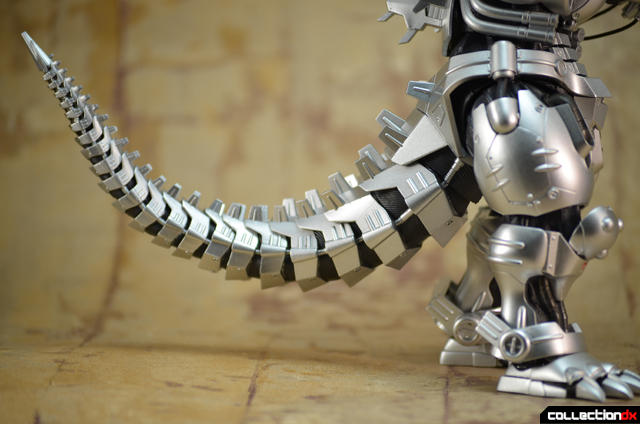 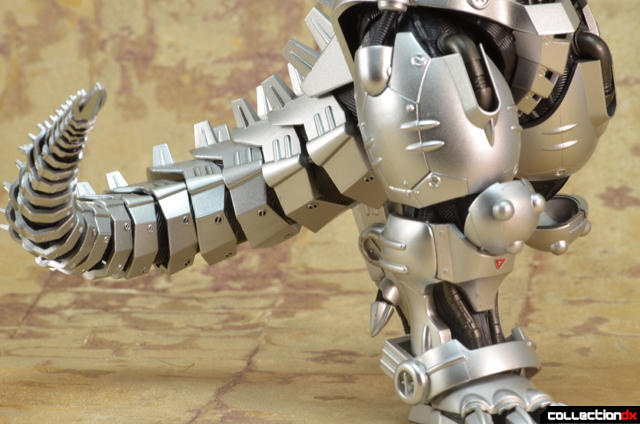 It has 14 ball joints that wonderfully!  Almost every segment of the tail gets its own ball joint. The top two segments share a joint  and the smaller segments on the tip are a single piece of plastic that share a joint.
Besides being awesomely articulated, Kiryu comes with one set of extra weapons: two blades for attaching to the laser cannons on the arms. 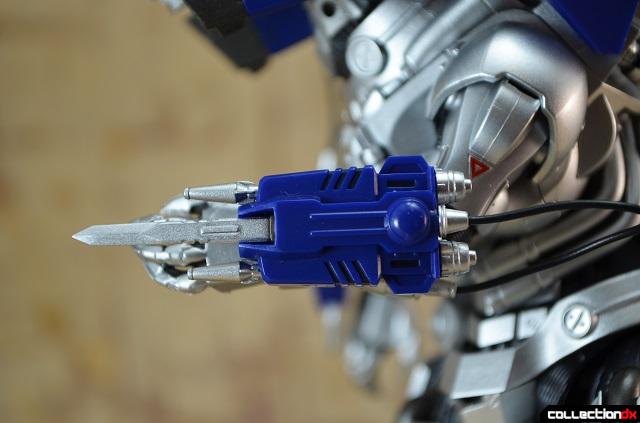 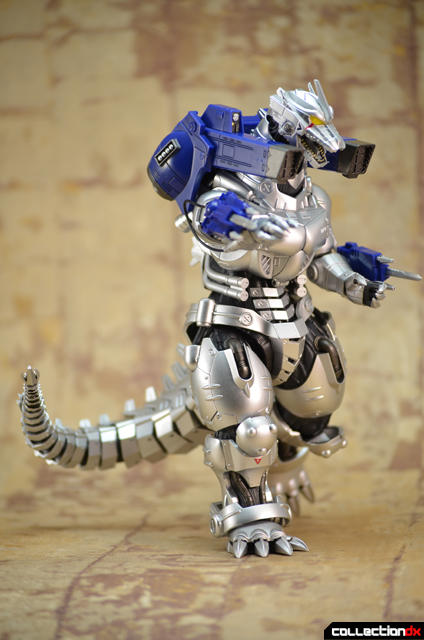 It is shame that we didn’t get an Absolut Zero effect part for this release or a nice sturdy stand to hold the robot in a flight pose; the addition of these would have made this great release even more amazing. Despite the missed opportunities, however, this is a great toy and one of the best S.H. Monsterarts releases to date. It has a ton of shelf presence and is nice to play with and pose. Plus, the mostly-mechanical design of Kiryu lends itself better to being made into an articulated toy than the other organic kaiju of the Godzilla universe. The cuts in the sculpt for this toy look natural and in sync with the design of the monster.

And now for Kiryu’s greatest enemy to date… 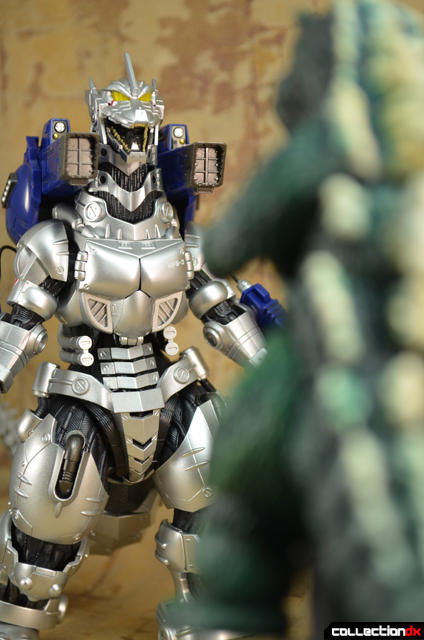 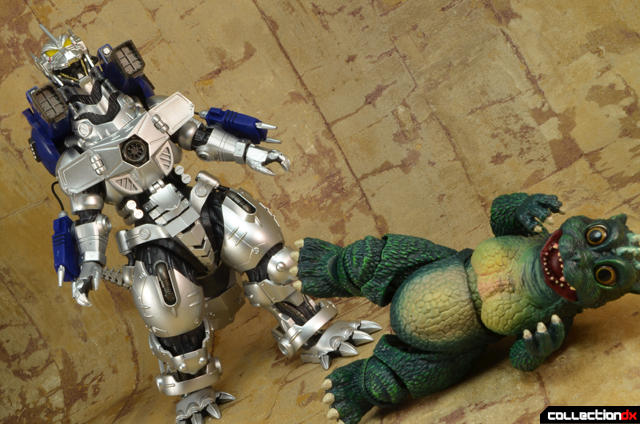 Looks like little Godzilla is too smart to get hit with the Absolute Zero cannon. 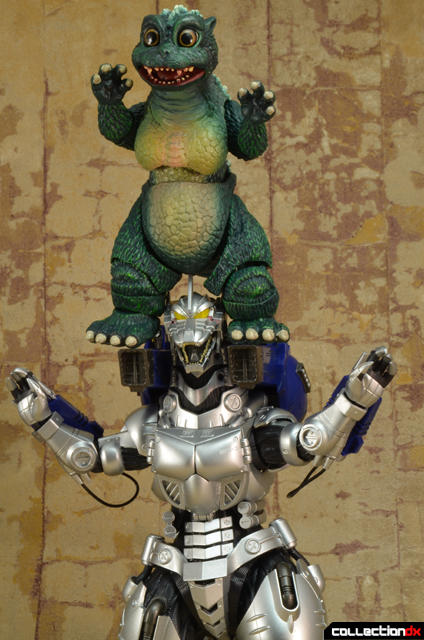 Looks like the little guy just wanted to play. 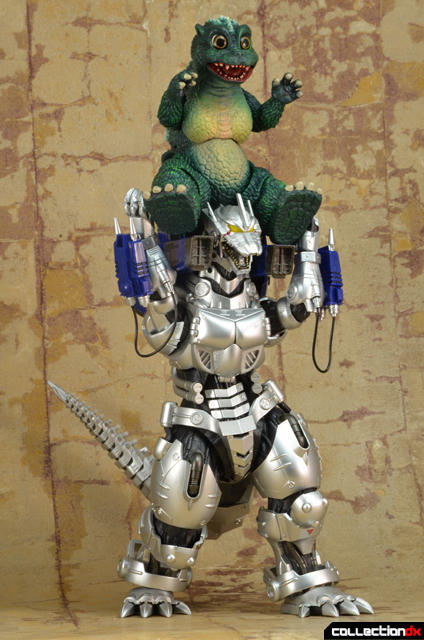 Kiryu appears thanks to our friends at Bluefin Tamashii Nations. You can get your hands on this mechanical giant over at Amazon.com.

This is an amazing looking figure, I don't care what the articulation flaws are.

The picture of him facing his ultimate threat is just priceless!

Thanks! I had some fun with Kiryu and Little Godzilla.

Originally I was going to have Kiryu face Hyoga from Saint Seiya in the Battle of the Absolute-st Zero, cause Hyoga also has an attack that freezes things to absolute zero. But I didn't feel like digging out Hyoga's box to get his hands for the attack.

Perhaps when I review the EX Hyoga, Kiryu can make a cameo.

I love this review. I got this figure, and it is amazing. sometimes its hard to capture how awesome this beast is in pictures. great stuff! thanks!

There is just so much awesome in this figure!

I've always wanted some figure of Mecha Godzilla. If I only got one, would this be a good choice?

Good question. Since this is the only Mechagodzilla toy I own, I can't really compare it to any of the other releases.

I have the 2003 version (special plated version). and this looks great too!