This version of Megatron is based off of his appearance in the ongoing Transformers (2013) comic by IDW Publishing. Designed by fan-favorite Transformers artist Don Figueroa, Megatron takes on the form of s stealth bomber similar to the Northrop Grumman B-2 Spirit.

Also worth noting is that this release is part of the "Thrilling 30" commemorating the 30th anniversary of Transformers.

As it is packaged in robot mode, that's where we will start.

Megatron stands XX tall and actually has a nice silhouette to him when in robot mode. It is very reminiscent of the Macross 7 VF-17D Stealth Valkyrie. 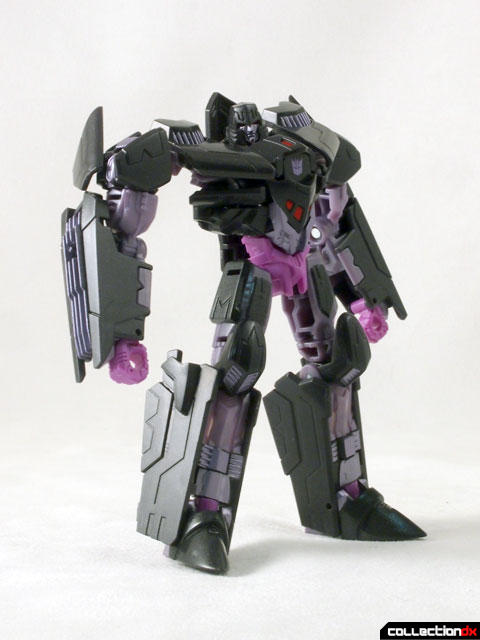 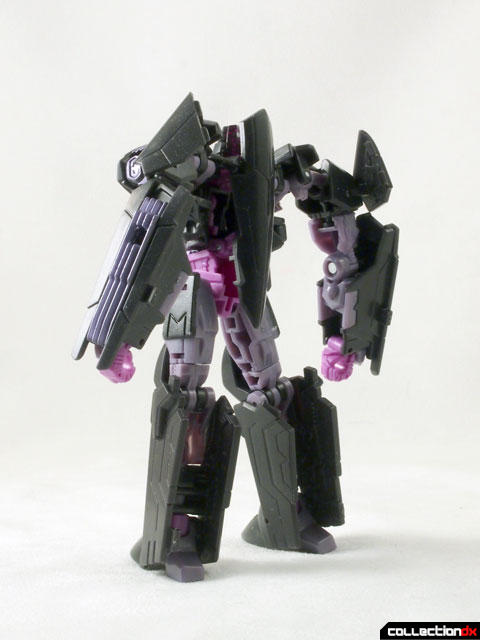 Articulation in this mode is excellent, with the hollow legs actually benefiting the toy in this case. Granted they are hollow for transformation rather than for cost-cutting measures. 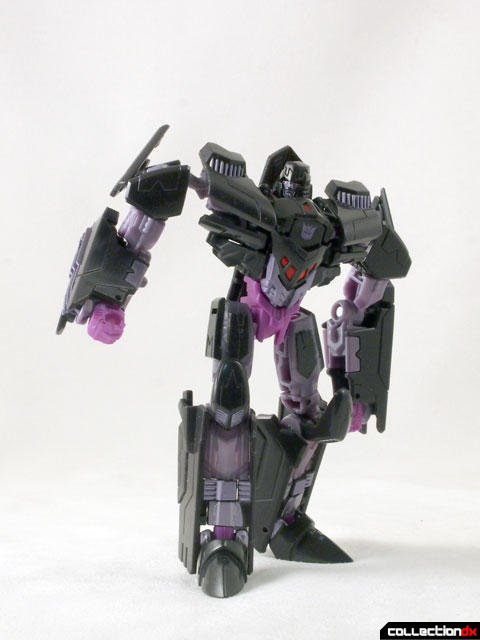 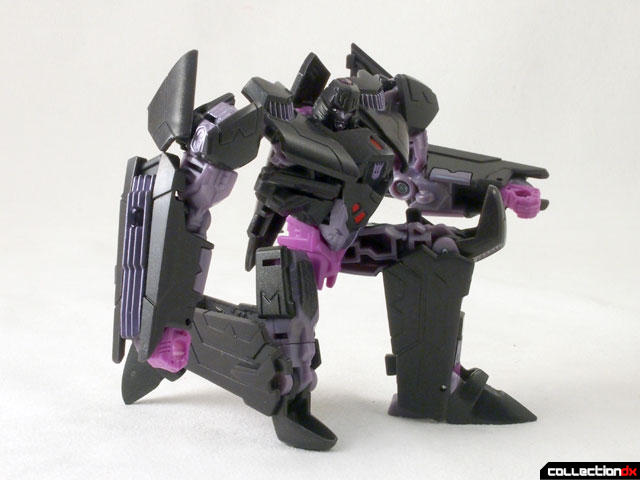 And what is Megatron without his arm cannon? Two halves of the wings assemble and plug into the hole on the arm in the standard 5mm port. The gun is a little dopey looking in my opinion. 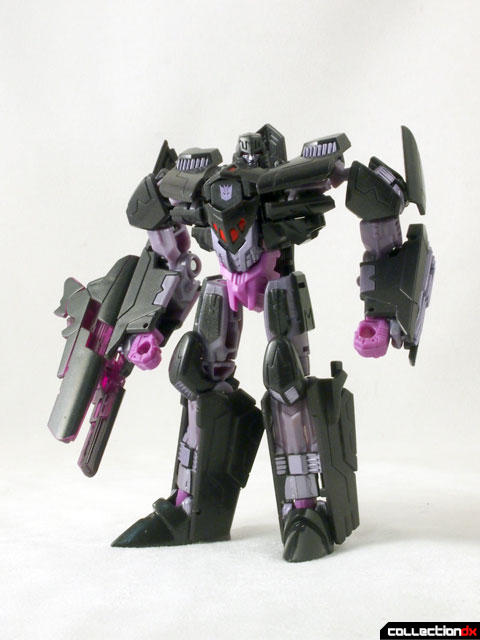 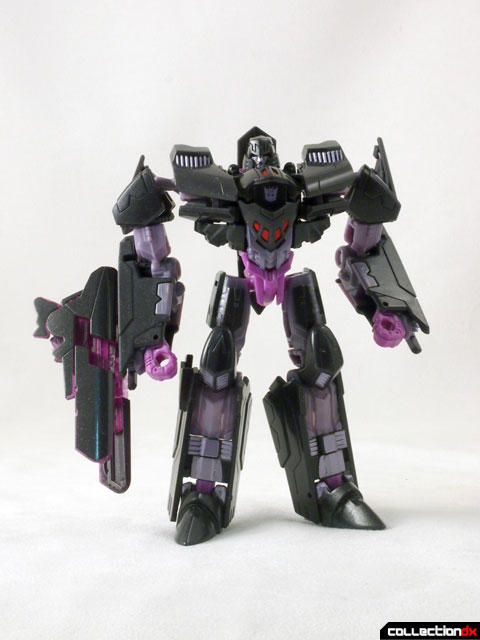 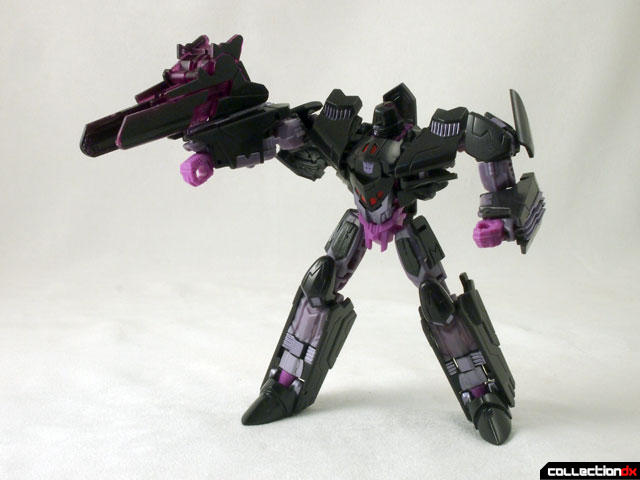 Transformation is nothing revolutionary, but the cool thing is you can stop halfway and make a gerwalk mode like the Macross toys. This is unofficial, but it sure looks cool. 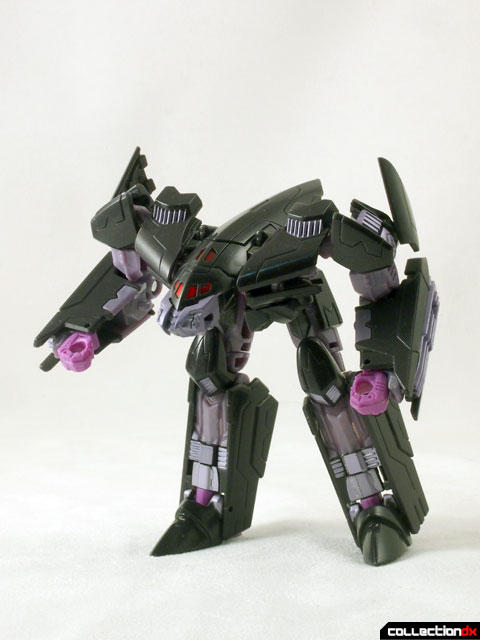 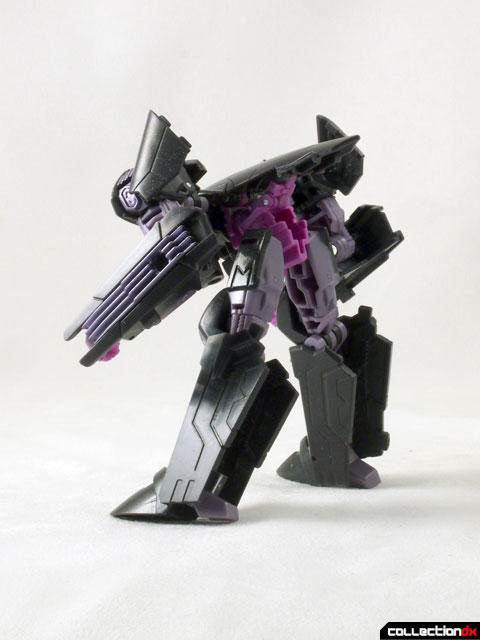 In bomber mode there's a front landing gear, but that's it. It looks good, but some of the panels don't want to sit flush, especially where the former weapon parts become wings. In fact, I had a lot of difficulties with these parts in general. They are supposed to slide in and out with a lever action, but mine never worked right and one side actually fell apart. 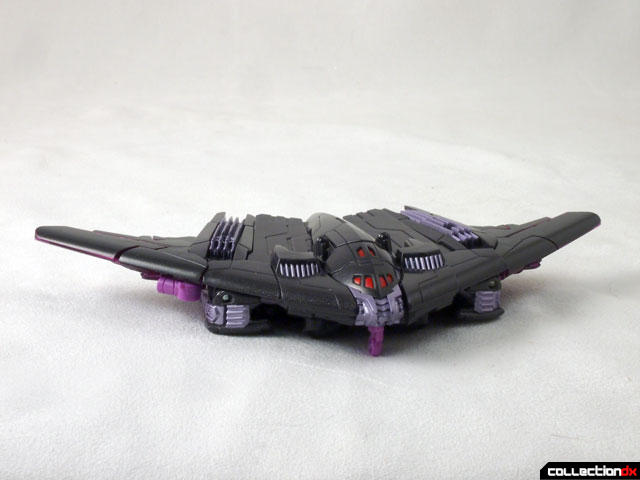 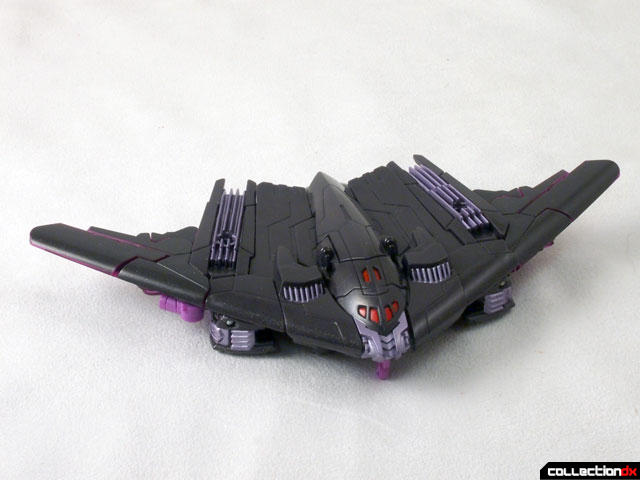 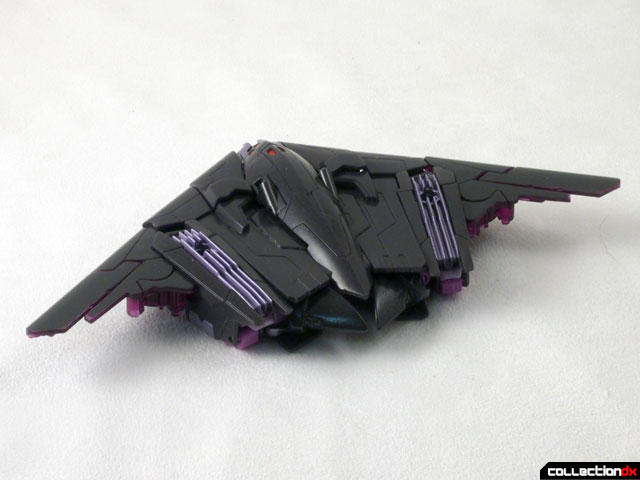 The 5mm ports are now shown on the back of the vehicle mode, where you can mount any other Transformer's weapons. It looks very cool. 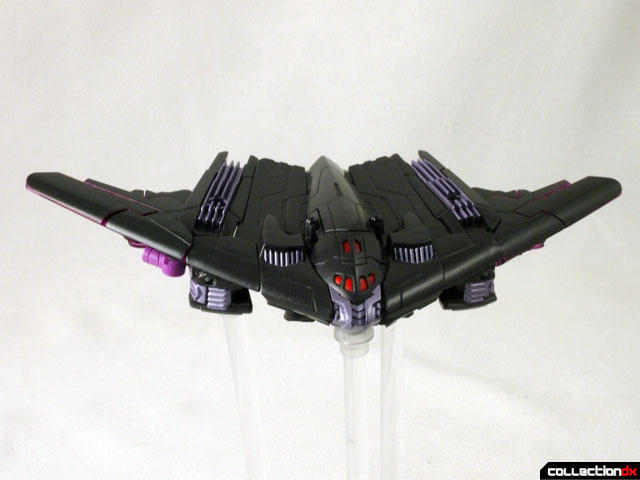 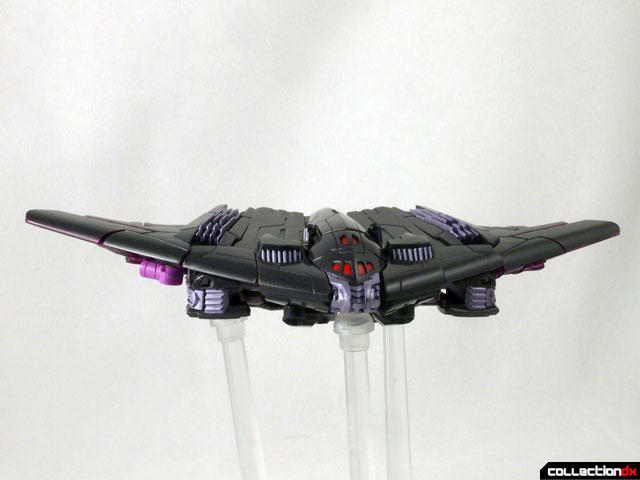 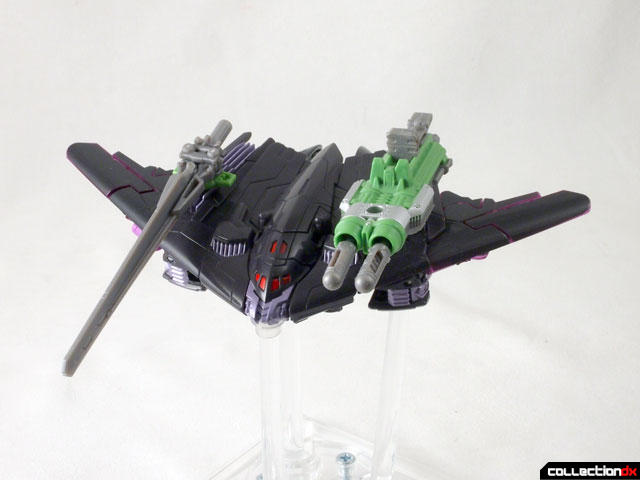 Overall it's a decent robot at a decent price. There aren't many out of this recent batch of Transformers that I'm interested in, but the design nod to Macross got me to make this purchase. I don't regret it.

It's a good figure, but I heard there's a lot of issues between the designer and Hasbro about it. On his deviantart page, Don Figueroa said he felt personally insulted because Hasbro used his design without any attempt of contacting him like they did with the first "Classics" figures, saying they just 'stole' his design (comparing it to the Third Party figures). he was more disappointed because he was powerless to do anything because Hasbro's control over the original character outweighed his right to challenge.

Good Review Josh, but I'm shocked, no mention of the included comic though? It's a good book, you could really apply Megatron's motivational methods for future CDX outbursts!

That's so odd. I assume anything he does for a TF comic is "work for hire", and becomes the property of Hasbro. Presumably Hasbro reserves the right to make toys based on any comic designs, and that's probably written into his contract. It just seems strange that he'd be surprised about it at this point.

The artists are all work for hire, but a lot of them are dedicated to their craft and which book they're working on. The comics have been getting away with a lot of things that Hasbro hasn't done or doesn't plan on doing right now although I'm sure at some point Hasbro's going to let Chromedome and Rewind.. urh.. come out (I know TFCC has their figures soon but that's another story).

Lately the comics have been forced into making things more in line with outside influences like the High Moon video game character models being used for some of the cast, and now we're seeing characters appear based on the toy lines like Crosscut who is a remold of Skids (and a throwback to his Diaclone figure), and Dreadwing remolded of this Megatron.

Don created that design for the comic long before Hasbro had plans to make a figure of it, but because they own Megatron's character they can do what they want to make a new figure.

I honestly think that is Hasbro's biggest flaw compared to the likes of Bandai, who acknowledges a designer's role in some releases (such as the 'Gundam 00 'designer color' models or the multitude of Version Katoki figures and models), especially when some of the figures that are coming out now are clearly based on the styles of Don Figueroa, Alex Milne, and Nick Roche to name a few.

Do you honestly think Katoki owns his designs? Bandai owns all the Gundam designs same as Hasbro owns all the Transformers designs, no questions asked. Anyone working for them designing characters must know that they have no ownership over the IP. If Don feels such ownership over his designs, he should go start his own company (which, in fact, he has, altho they have yet to release anything after years of announcements). It's no different than comic writers and artists in the 90's, which is why we now have independent, creator-drive companies like Image. Don's been doing this for a while, though, so I cannot imagine why he would be surprise to see Hasbro using a rendition of their character that Don just happened to draw and making it into a toy. Maybe a nod somewhere along the way would have been the 'nice' thing to do, but they are in no way obligated. I am sure the TF comic artists' contracts are so ironclad and refined that there should never be a question of who owns what.

I had heard a rumor about that, but I couldn't confirm it so I left it out. I figured someone in the comments section would fill in the blanks, and I was not let down.

In regards to the comic, I flipped through it, but I really wanted to focus on the toy itself. I think I gave the comic to my kids.

Dude, seriously you should read it. It's perfect for you!

I really really like this design.
But like most generations it just kills me to see how the Takara versions just keep wiping the floor with the Hasbro's.
I was pulling the trigger on this very piece just last week until I saw a review of the
Takara version featuring deep deep black paint, bright purple panel lining, and accurate paint aps on the hands and face.
Every time I see a awesome transformer like this I just sigh that us US folks get the cost cutting versions.
Great review though..
It is a great design.

My cousin got this and Orion Pax for Christmas. It was a nice surprise.

Now if only I can find Waspinator at retail.

I got this guy loose, so I had to figure out his transformation without instructions. I mention this because you said his legs are hollow? But there's a hinge on the back of his legs that let you close up the back, thereby minimising the hollowness. Although this seems to limit his ankles somewhat. The hinge seems to be there purely for this purpose though. Perhaps this wasn't mentioned in the instructions?