From 1971 to 1973, Shotaro Ishinomori's original Henshin Hero Masked Rider 1 and Masked Rider 2 tore up the airwaves fighting the evil Shocker.

Jin Keisuke, son of a mad scientist Professor Jin Keitaro returns home to Tokyo from school in Okinawa and is immediately attacked by suit-wearing ruffians who transform into agents of GOD. After a brief scuffle, they shoot him and he falls in the ocean. Neptune then attempts to kill him with evil bubbles that can melt the flesh off of skeletons. No really. I'm serious. He's beset by the god Neptune, except Neptune is a cyborg.

Keisuke drags himself out of the ocean and goes to his father's secret hiding place where he is immediately attacked! By his father! Seriously. But don't worry it's just a test of skill. Dear old dad is the kind of father that will bodyslam you if you aren't interested in following in his scientific footsteps. His dad literally throws him to the ground. He just wants to be a sailor, but Professor Dad beats him good and makes him put on an ugly vest. Then his dad shoots him and laughs about it. Because it's a bulletproof vest.

That night Neptune injures his father and a ninja that is actually his girlfriend pours acid all over his dumb orange vest. DRAMA. Then GOD Combatmen shoot him like a zillion times and his dad turns him into a cyborg to save his life. That cyborg is Masked Rider X! With the help of a giant computer island that bears his dead father's personality, a submarine motorcycle named Cruiser, and the identical twin of his traitorous ninja girlfriend, Masked Rider X fights against GOD cyborgs with names like Spider Napoleon, Ant Capone, and Starfish Hitler.

This show is insane. And now you can have this insanity in your hands with S.H. Figuarts Masked Rider X! 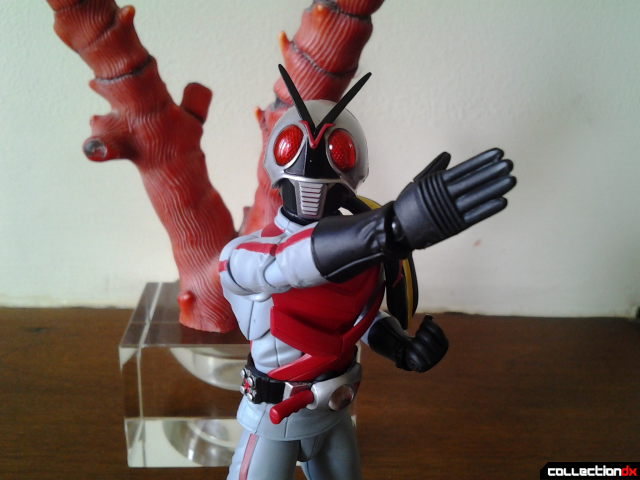 "With the Redizer and Perfecter, Jin Keisuke Sets Up into Masked Rider X!" 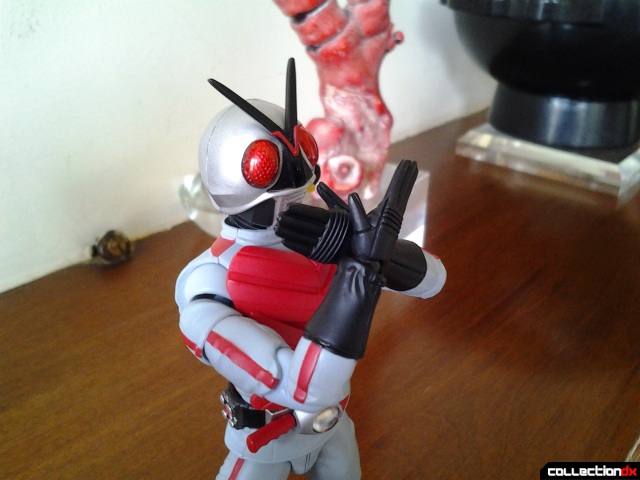 Call him Kamen Rider X if you want, but the box says Masked Rider X, so I'm going with that.

You can always expect good articulation with S.H. Figuarts and X Rider is no exception. In fact, this toy is more articulated than any of my other Figuarts because in addition to his shoulder joint and elbow joint, he has a twist below his shoulder. Very nice! 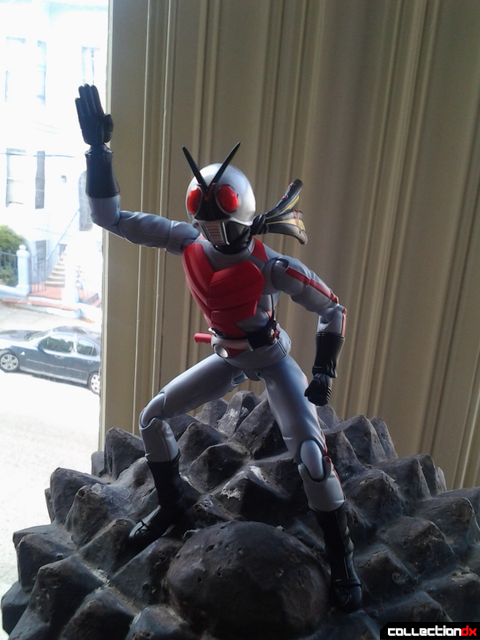 He also comes with two scarves, action scarf and resting scarf. The way the scarves attach directly into the back of the figure's neck instead of into a separate scarf ring around the neck like Masked Rider 1 (renewal version) is really annoying. It dramatically limits the posing possibilities of the scarf and it's very difficult to cram the ball of the scarf into the socket of the neck. Furthermore, the action scarf looks super goofy in almost every pose and the resting scarf only looks good when draped directly over the chest. 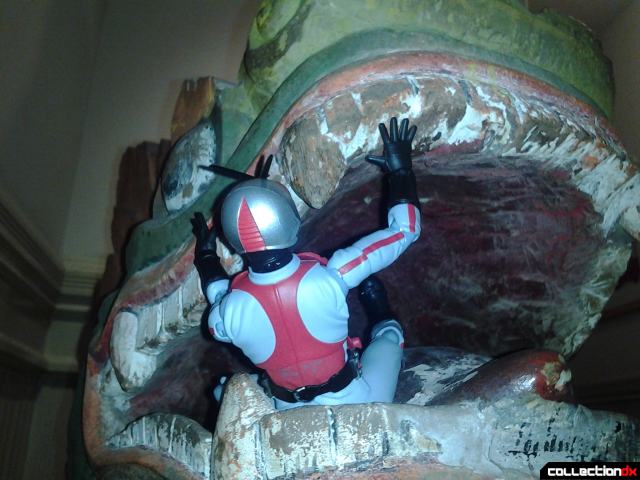 He comes with the usual Figuarts wide assortment of hands including jazz hands or perhaps "please don't eat me, monster!" hands. Personally I don't really need that many different hands, but for those of you that delight in the options, Bandai has not skimped out. 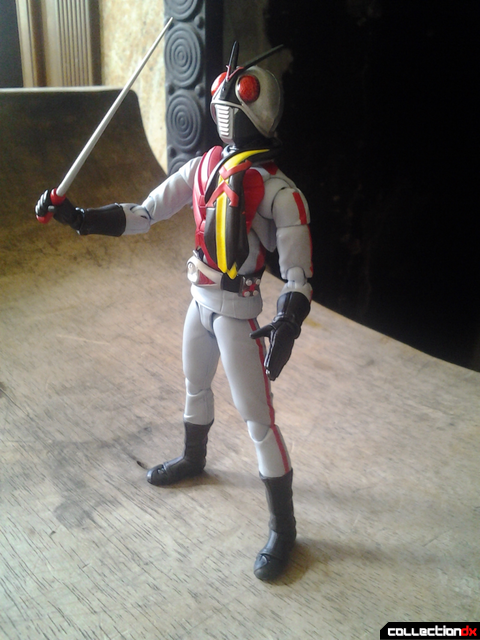 He's equipped with a weapon called Ridol, which he pulls off of his belt. It can turns into several different forms including a sword. 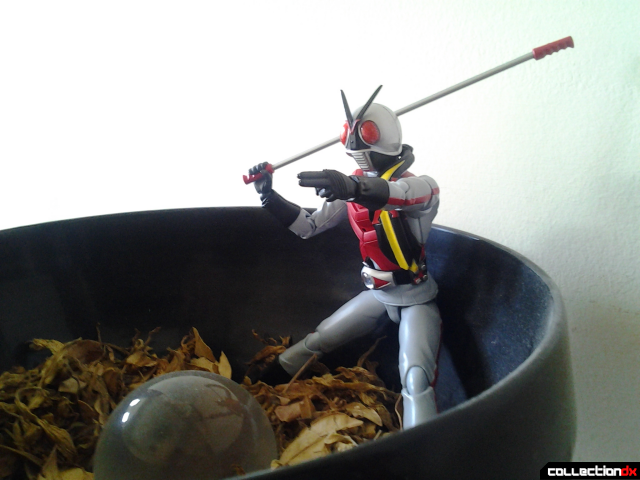 There's also Ridol Stick, which is like it sounds, a staff form of the weapon. 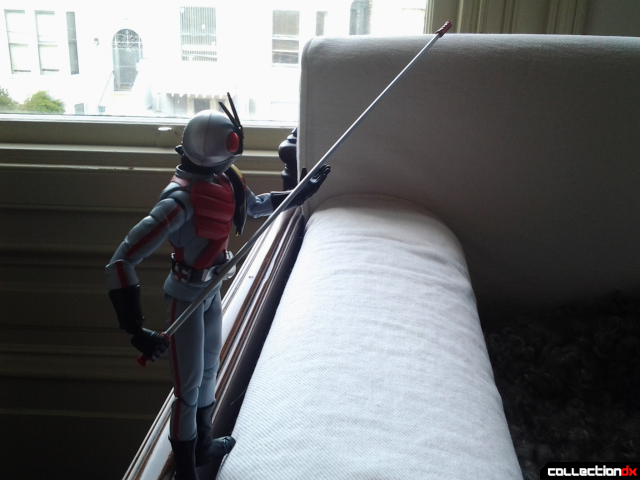 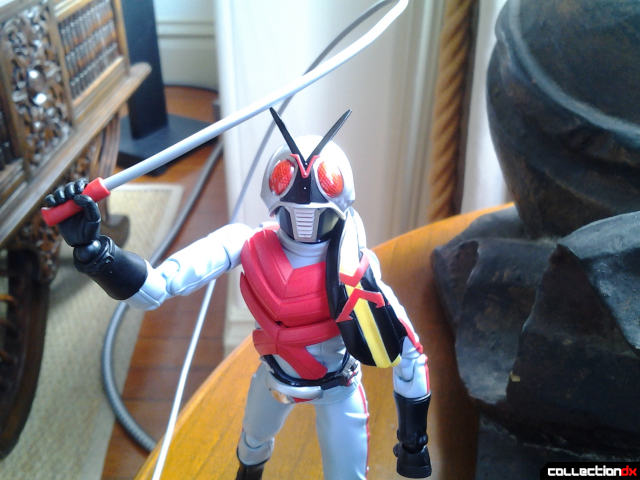 The final form of Ridol is a whip. And let me tell you, this is one long whip. 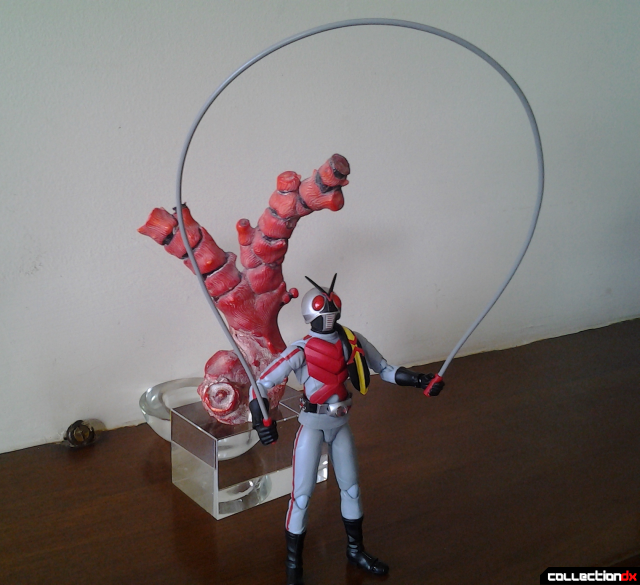 I'm pleased that X Rider can use this whip like a jump rope. Another cool detail about the various forms of Ridol is that while they each come with Ridol handles attached to them already, the handles are removable. 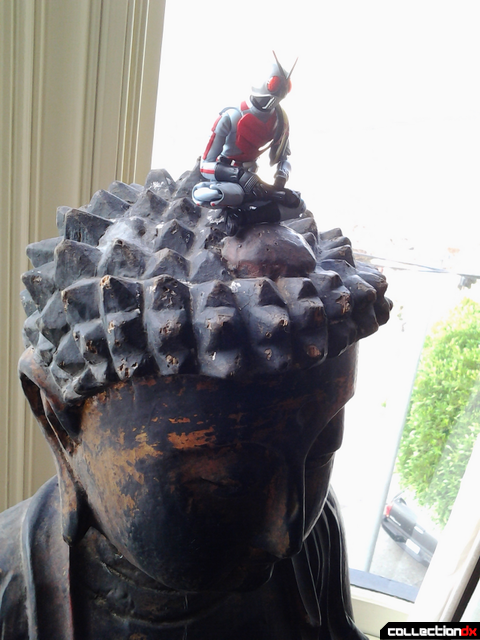 While S.H. Figuarts Masked Rider X is generally a very nice action figure with excellent articulation, another problem is his head. It is really, really easy to knock poor Rider X's head off and it's very difficult to get the head back on. This flaw is bad enough that it is likely to turn your Rider into a display piece instead of a toy you fiddle with all the time like Masked Rider 1 or the Zyuranger crew. It's too bad. 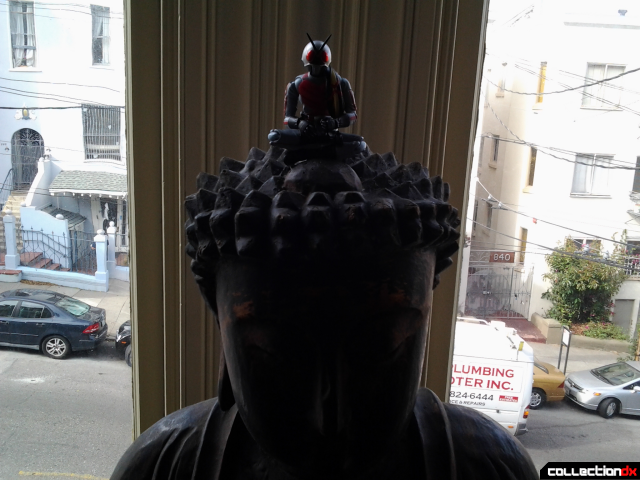 Unlike some earlier Figuarts toys, X Rider does not have diecast feet to help his balance. I do love diecast, but I don't feel it really detracts from the toy as he balances pretty well on a flat surface, even when laden with his ridiculous whip. 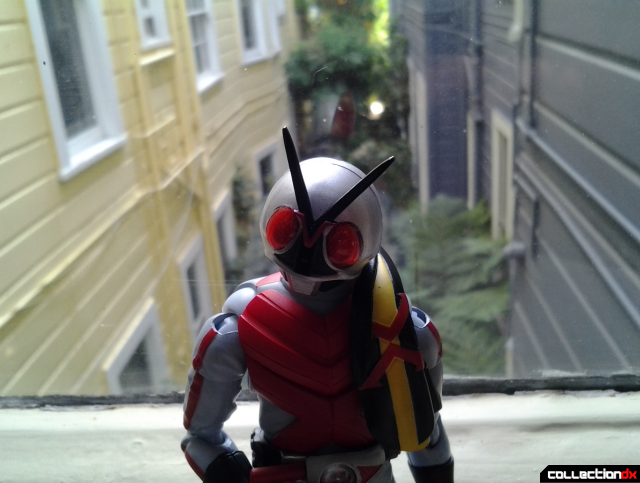 The last flaw is pretty minor. The X-shaped armor on his chest sticks out a bit and can interfere with both the belt and the abdominal articulation. It's not that bad and you can fool with it a bit to get the figure into whatever pose you are looking for, but it's a little disappointing. I realize it's partly the design in the original show at fault here, but none of my other Figuarts have a problem like this so it stands out. 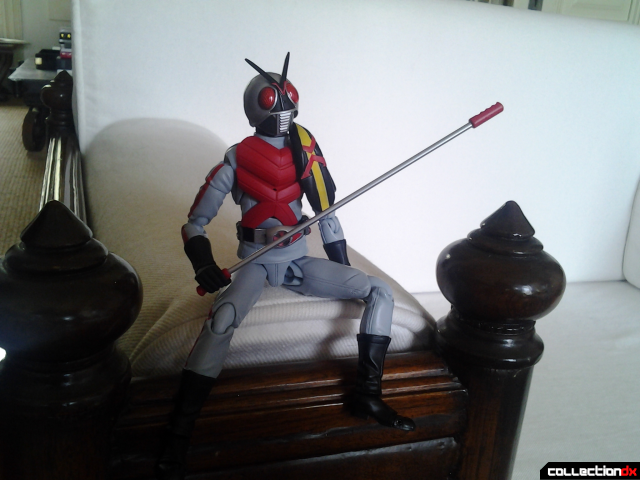 While S.H. Figuarts toys are never going to be heavy diecast deluxe transforming affairs, they are mostly really great action figures and Masked Rider X continues in that tradition despite some minor flaws. If you are into Masked Rider, I recommend checking out the TV show for its sheer whacked out strangeness and if you can handle the flaws, picking up an S.H. Figuarts Masked Rider X to hang with your Rider posse.

Check out my video for tips on how to play with your Rider figures and comparisons with other action figures! Please excuse the less than perfect lighting. I need to buy some equipment to brighten up the place.

P.S. X Rider decapitates Neptune and it turns out Neptune's head is a bomb.

My head on X is just fine and I don't recall it ever falling off, sorry to hear it is a problem on yours.

This guy is my favorite rider to just fiddle with every now and again and put him in different poses.