Mach Baron is the 5th entry in the Dynamite Action line from Evolution Toy. If you read my Gaiking review, you already knew I was sold on the magnetic joint gimmick, but now they've come out with a modern representation of one of my favorite designs. One of the things that makes this line so special is the interesting choices for the characters.

Mach Baron is a giant robot from the 1974 live action series Super Robot Mach Baron (スーパーロボット マッハバロン). I haven't seen the show, but judging by the clips on YouTube it looks insane.

The toy comes in a much smaller box than Gaiking, but it's nice enough. 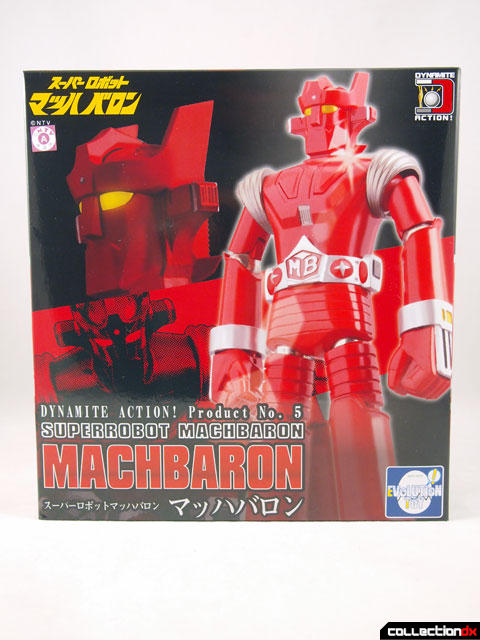 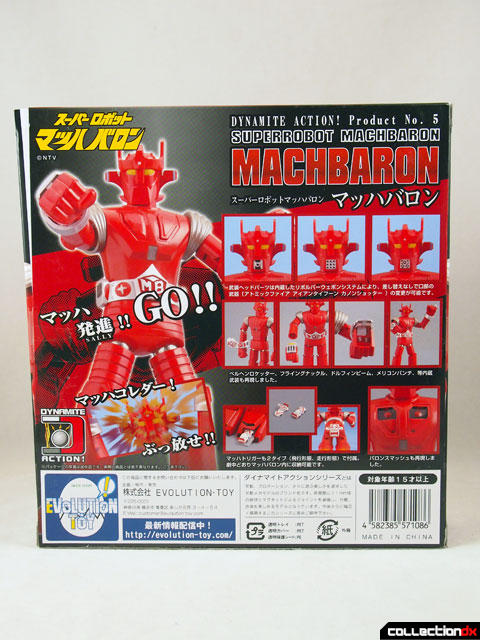 Mach Baron comes in a clear plastic tray and surprisingly few accessories. The truth is, many of the gimmicks are already in the figure. Also note that the figure comes with screw hole covers that I have elected to not put in. 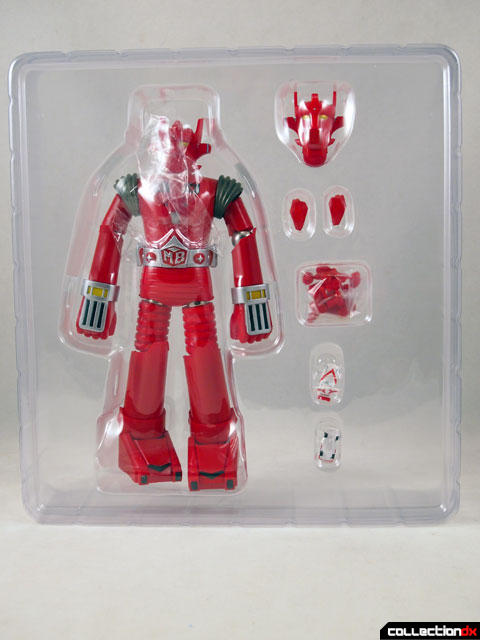 I love the fact that the toy can do a true neutral pose, reminiscent of the vintage chogokin. 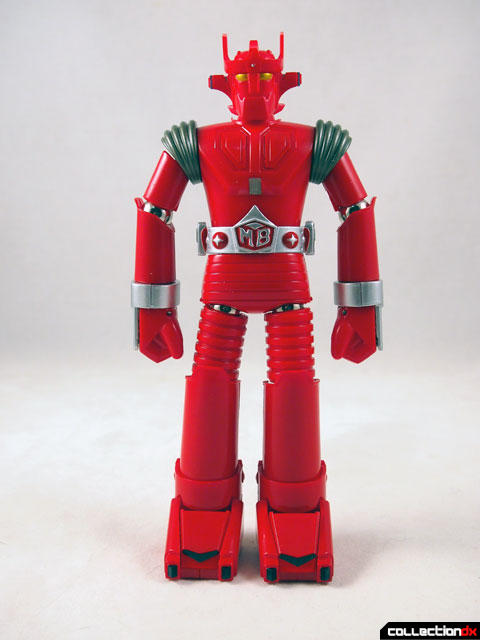 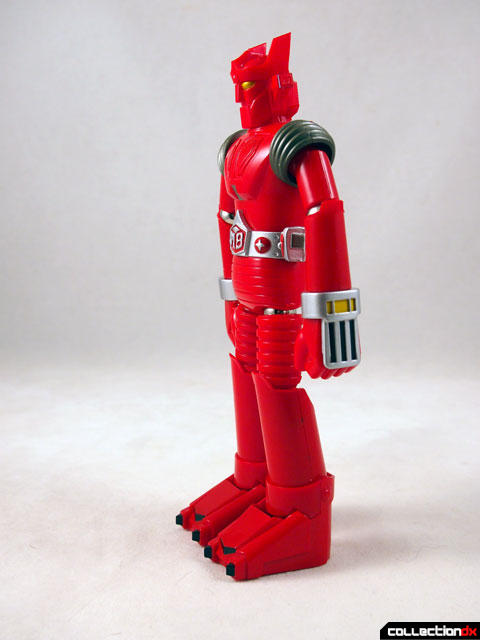 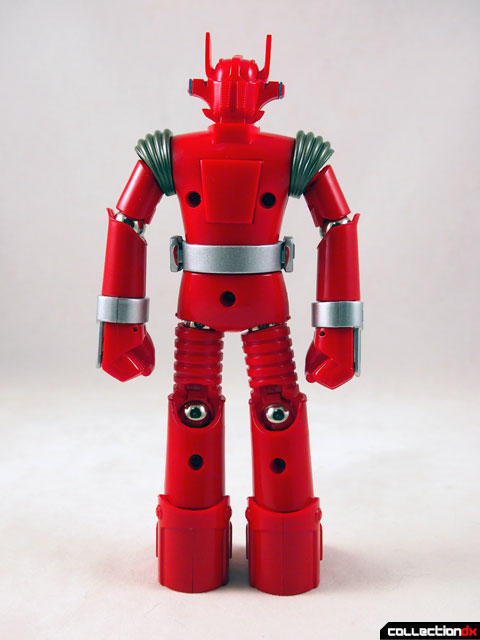 In the show, the pilot of Mach Baron, Yo Arashida, drives his car, the Mach trigger, into the foot of Mach Baron. The Mach Trigger is included, and the foot opens with a ramp that can slide out. There's some detail in the roof of the foot which is nice. For some reason, both feet of Mach Baron open up - i'm not sure if they both act as entrances in the show, but they never did in the other toys. 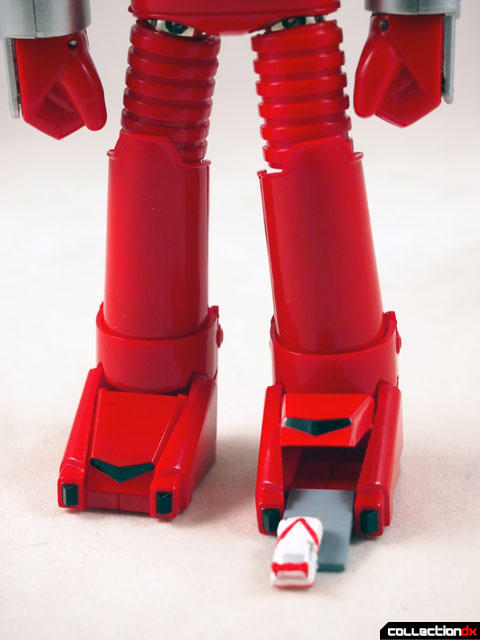 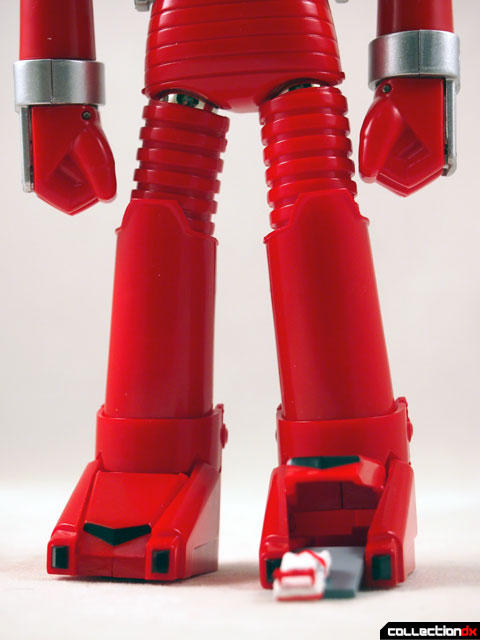 Being a magnemo toy, articulation is great. The toy can pull off both dynamic and casual poses. 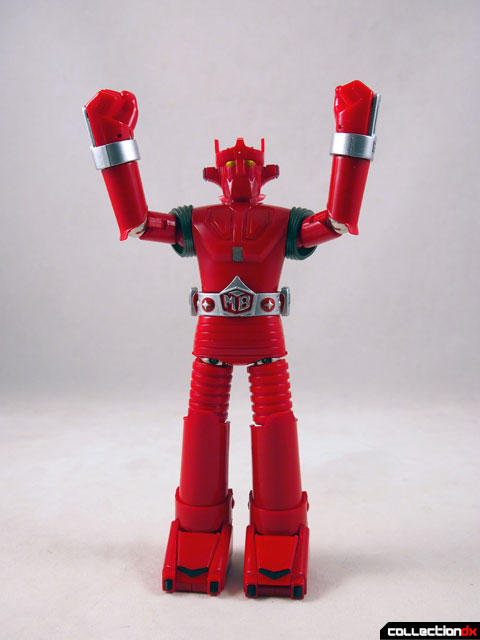 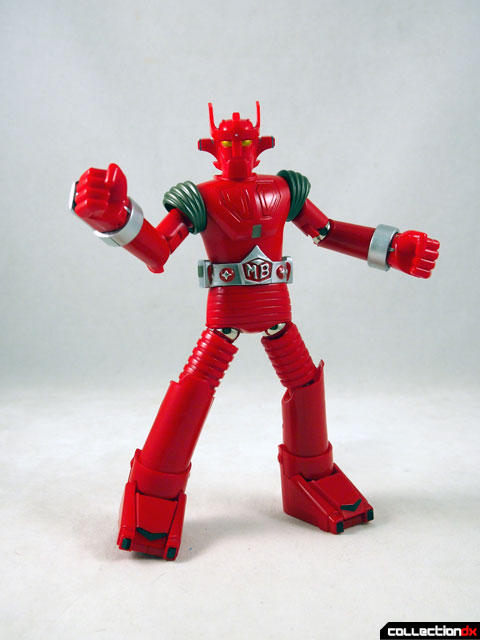 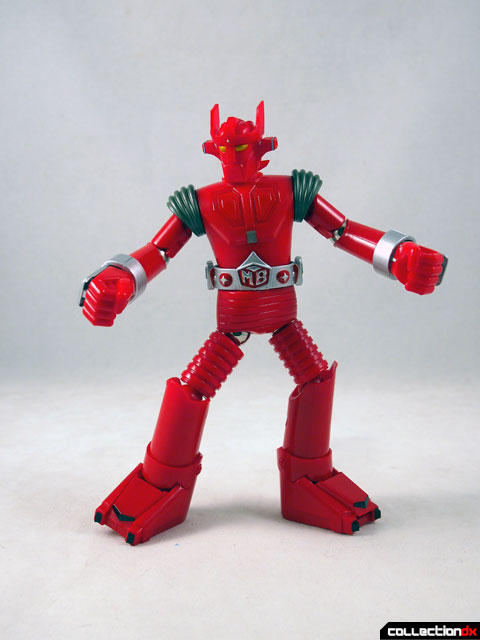 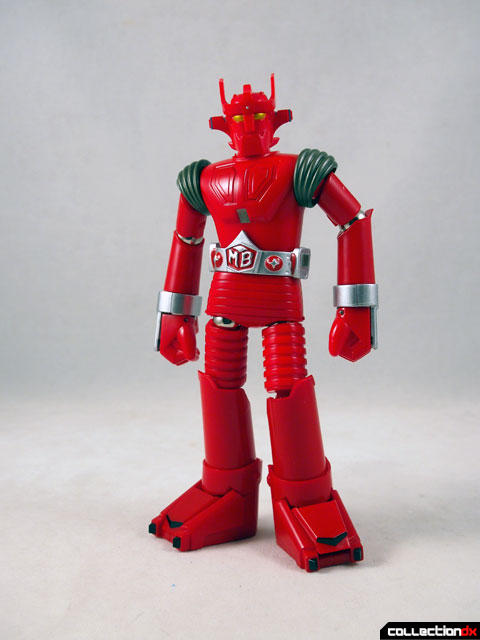 It's in the articulation that the one big flaw of the toy becomes apparent - the upper arm joints. The way this works is at the shoulder you have the grey covering that covers the magnetic ratchet joint. Just below that you have a bicep joint on a tiny non-magnetic ball. Moving the joint will separate the upper arm joint and not move the ratchet ball. It's hard to explain so watch the video. Evolution Toy knows about the problem and includes an addendum to the instructions telling you to REMOVE the arm at the magnet joint to reposition. It's sort of a cop-out.

The magnetic joint system is cool and makes for a modular toy. I think Evolution Toy's promo video illustrates it best. 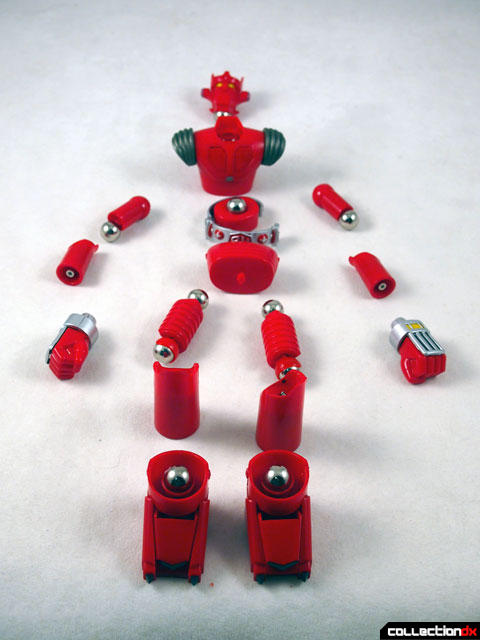 Mach Baron's Flying Knuckle attack is represented by removable fists that are held in place by magnets. They don't launch, which is a missed opportunity. 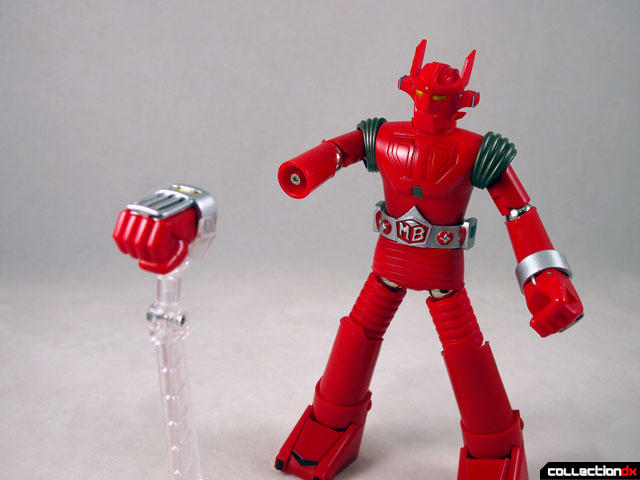 Two panels on the chest are removable to represent the Baron Smash attack. Once again, the missiles do not fire. 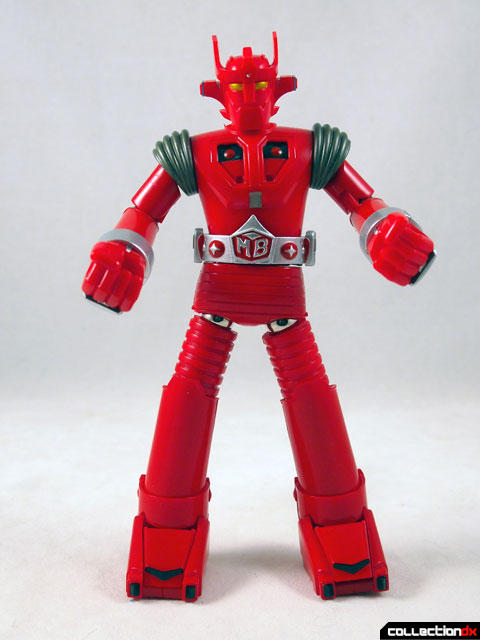 The fists open up to reveal the Dolphin Beam attack. Mach Baron only has these fists, so I hope you like punching. 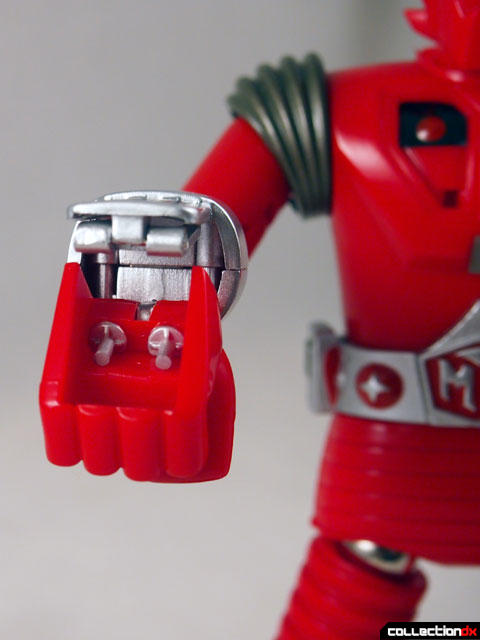 When they are open you can also swivel out the blade and then close the fist to show the Miracle Punch attack. 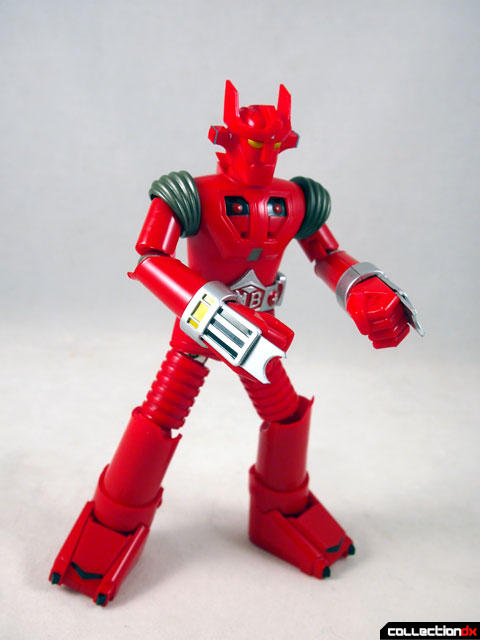 Turn the figure over and a panel opens on the back for the Mach Trigger to dock when in flight mode. 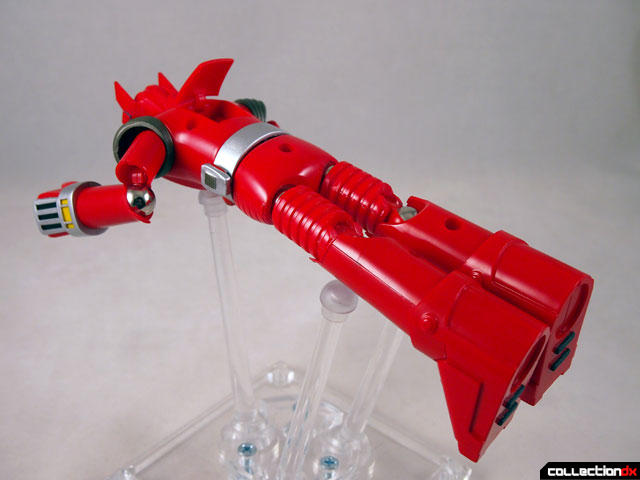 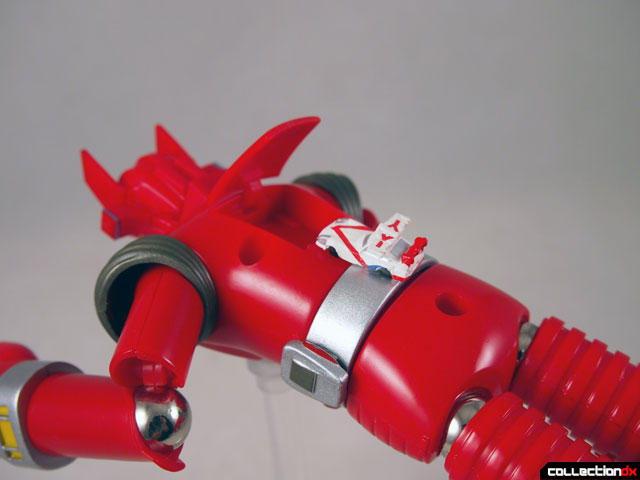 Evolution Toy provides an alternate head that allows you to replicate the effect of the mouth weapon changing. Open the head and spin the weapon assembly to change the method of attack. 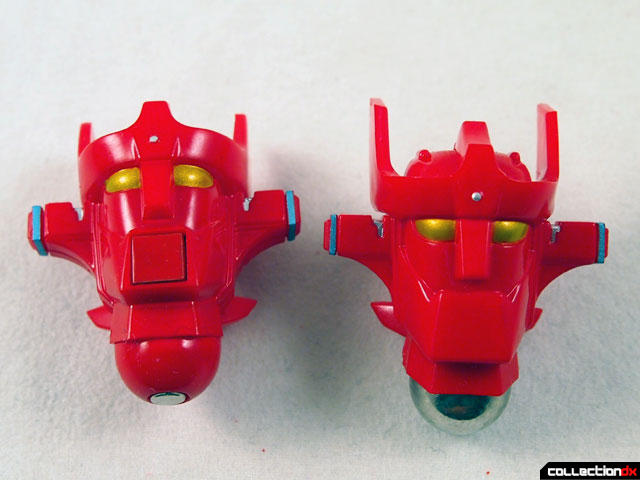 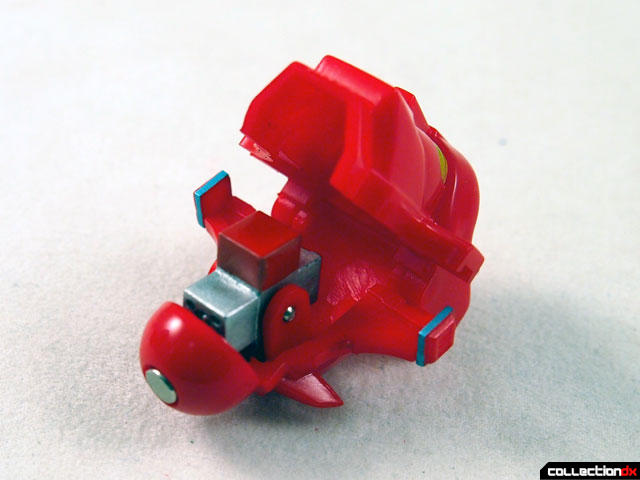 I mentioned that the toy was modular, right? Well not only is it modular, but it is compatible with other entries in the line! I had such a blast combining Mach Baron and Gaiking to make awesome creations. 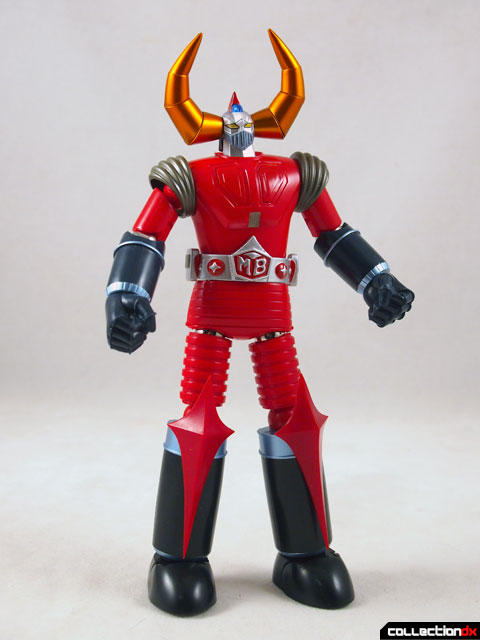 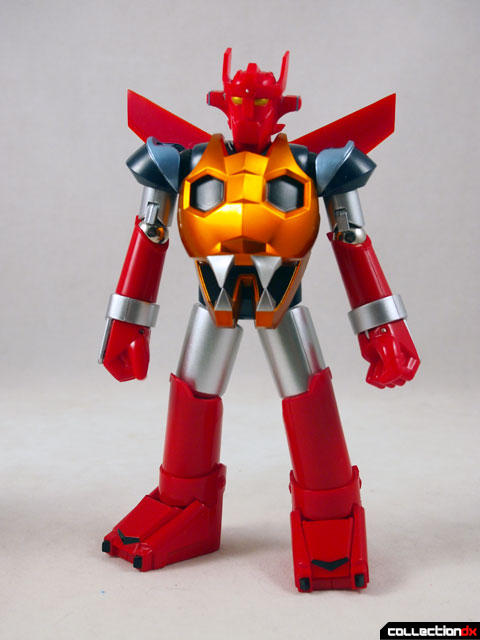 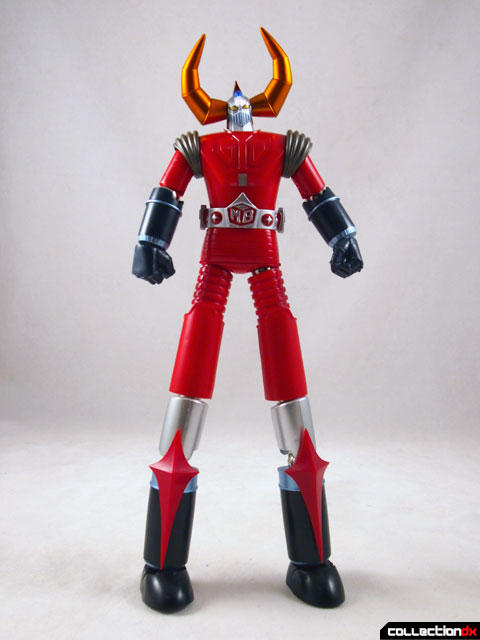 I know the Dynamite Action line is a decisive one. People either love or hate the magnetic gimmick. I was never a big fan of magnemo but this finally takes the gimmick and does it right. I had a lot of fun combining the toys together, but I feel that there were a few missed opportunities, espescialy for the price. The upper arm joint could be more secure, and I would have liked to have seen some missile firing gimmicks, although that is something mostly all modern toys lack.

Get your Dynamite Action Mach Baron at HobbyLink Japan.

unfortunately the TV show wasn't as good as an Ultraman or Spider-man... more along the lines of an Iron King. Still, I picked up the entire series on Amazon for a steal. Worth having the show if you have the robot...

One thing I like about this series is the accurate sculpt and the box and that's it.

The plastic used is the same one employed in cheap plastic models and the chrome spheres are not anime-accurate at all.

The price is always a killer!

So basically, you are getting a cheap plastic toy for the price of a chogokin!

I will never buy an EVOLUTION TOY again for as long as I live!

...it's a magnemo, I mean, what do you really expect? It's not like they're hiding that fact.

The price is too expensive for a plastic robot!

You are free to express your views but you need to stop double posting. This is starting to look like spam.