Jason and the Argonauts Skeleton Army

Most fantasy and sci-nerds grew up watching the works of special effects master Ray Harryhausen, and I was no exception. Protege of Willis O'Brien (The Lost World, King Kong), Harryhausen cut his teeth as a stop motion animator on George Pal's Puppetoons. During World War II, he worked under Frank Capra (It's a Wonderful Life, Mr. Smith Goes To Washington) making short training films for the troops. After the war, he worked as O'Brien's assistant on Mighty Joe Young, and went on to create the effects in The Beast from 20,000 Fathoms (the inspiration for the original Godzilla) on his own. 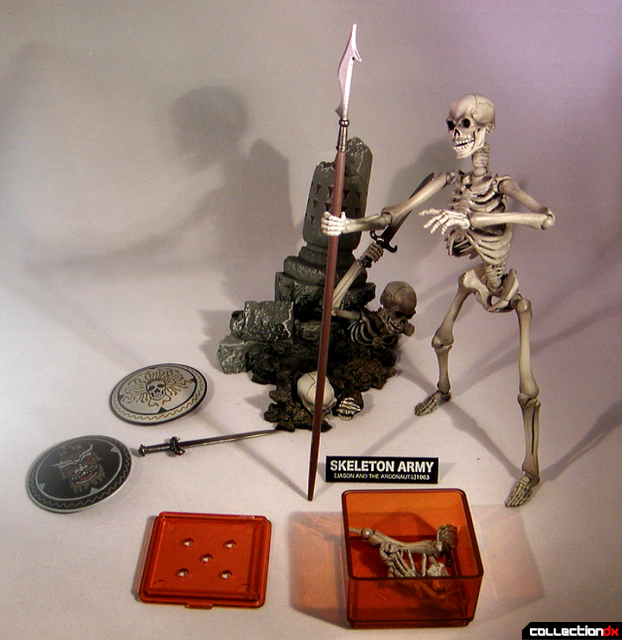 In the years that followed, he created effects for series of wonderful (and cheesy) films like It Came from Beneath the Sea, Earth vs. The Flying Saucers, 20 Million Miles to Earth, and dinosaur films One Million Years B.C. and The Valley of Gwangi. He also made three Sinbad movies and perhaps his most advanced work, the original Clash of the Titans. But today we're here to talk about his 1963 classic, Jason and the Argonauts. 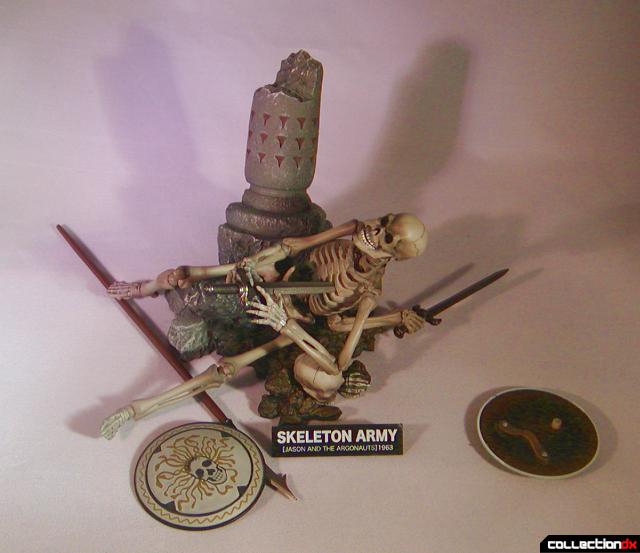 The film is a pretty standard telling of the well-known Greek classic where a guy named Pelias seizes the throne Thessaly. A prophecy warns him that one of the dead king's children (wearing a single sandal) will overthrow him in time. Pelias puts one of princesses to death, pissing off the goddess Hera, which is never a good move. But it doesn't matter, because Pelias has a son, Jason, who grows up and saves Pelias' life, losing a sandal in the process. Pelias realizes who he is and encourages him on his quest to find the Golden Fleece, a legendary symbol of nobility... and kingship. Hoping he'll die on the journey, Pelias equips Jason and he and a group of heroes (including Hera's son Hercules) set out on a boat named the Argo, hence the Argonauts.

During their journey, Jason and friends encounter seven skeleton warriors and have one of the coolest battles in stop motion animation history. 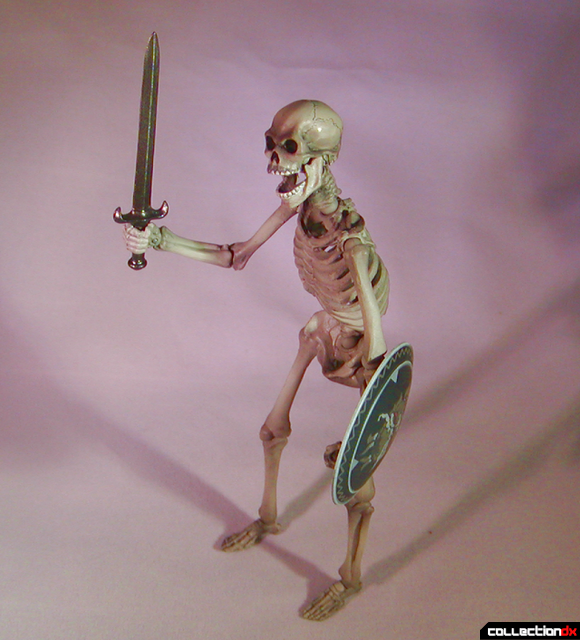 Kaiyodo has been releasing Revoltech toys for years, but those were mostly based on Japanese movies and television shows. I'm really excited by the Sci-Fi Revoltech toys, which are based on Western productions, like this Jason and the Argonauts Skeleton Army figure. 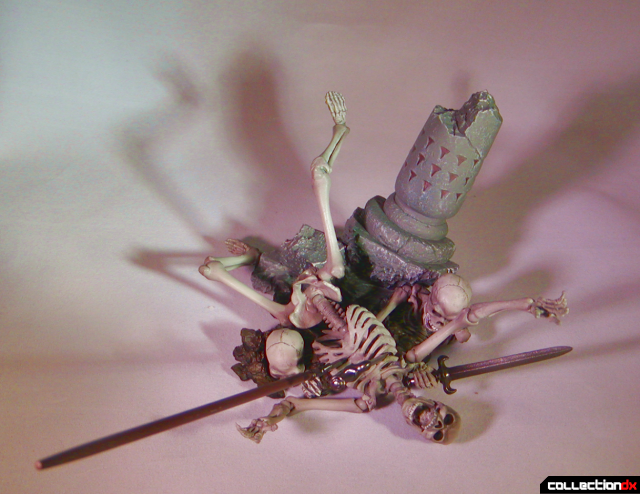 Maybe it's not the most impressive feature, but I really love that the jaw is hinged. C'mon, you know that chewing is a cool action feature! 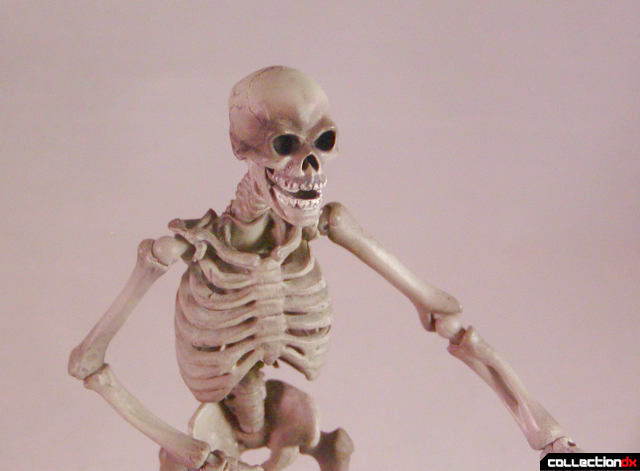 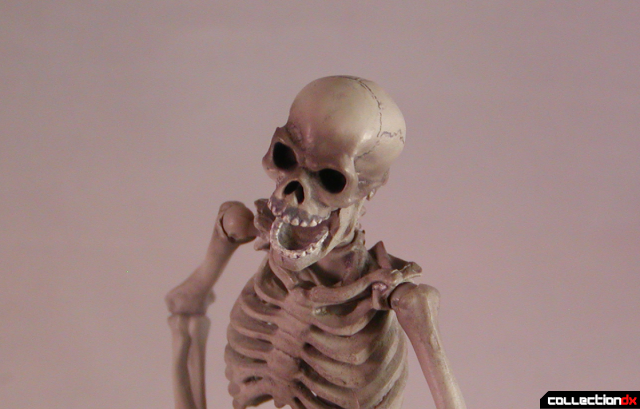 If you are really hardcore, you will buy seven of them and stage epic battles on your coffee table or in your backyard, but even one toy on its own has a lot of flavor. 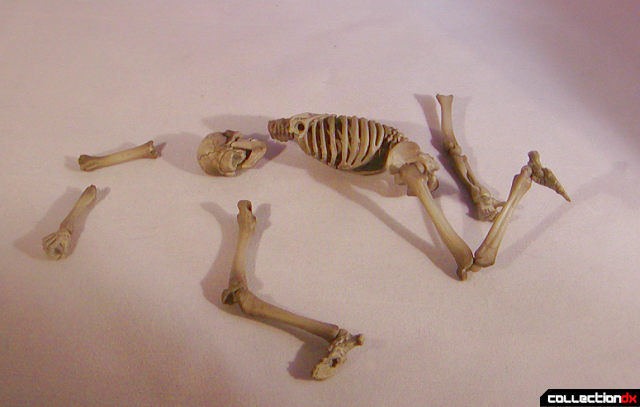 Plus due to the way the toy is assembled with Revoltech joints, you can yank off all the body parts and leave yourself with a pile of bones! It's perfect for an ancient tomb diorama or something like that. 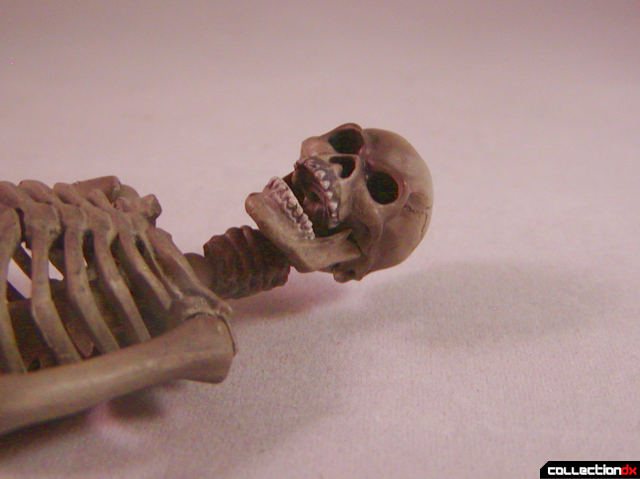 Skeletons hate it when you wake them up from naps! 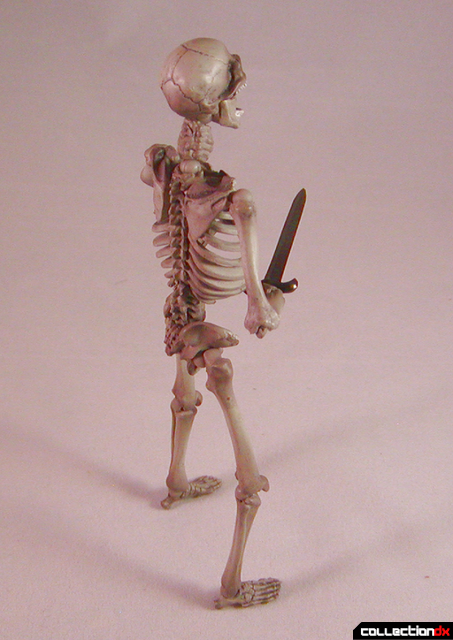 One thing worth mentioning about the sword: the regular fully poseable hand cannot hold the sword. You have to use a special arm that is fairly immobile (frequently used on the second half-skeleton built into the base). Kind of a weird limitation of the toy, but the sword-holding arm is a lot less likely to flop down than the regular arm.

Also one of the shields was completely impossible to get onto the arm. I guess the clearance on the strap is too smell. I bent one of the arms trying to force the shield on and gave up. 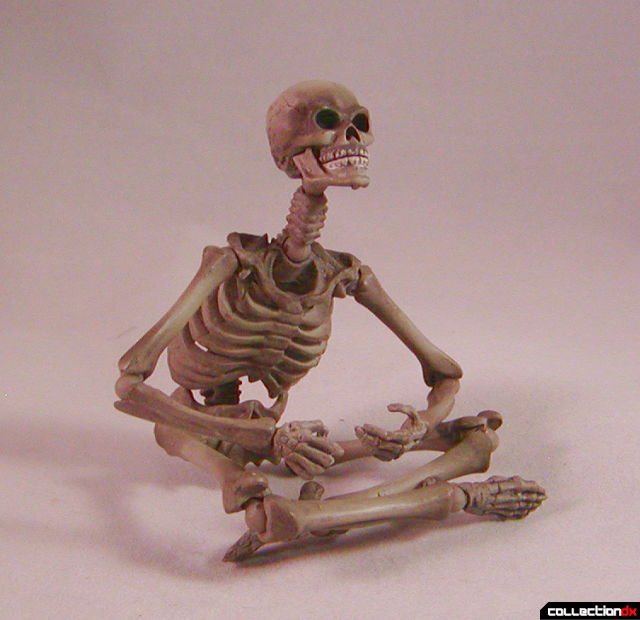 The toy is very very well articulated, and you can get it into almost any pose you can think of, even with crossed legs like this. But there is a caveat here: you will probably have to fiddle with the Revoltech joints until you get them to a place where they won't be really floppy. You may need to switch joints to different places in the body to get ones that are the right stiffness or replace them with joints from one of those packs of extra joints you can buy. 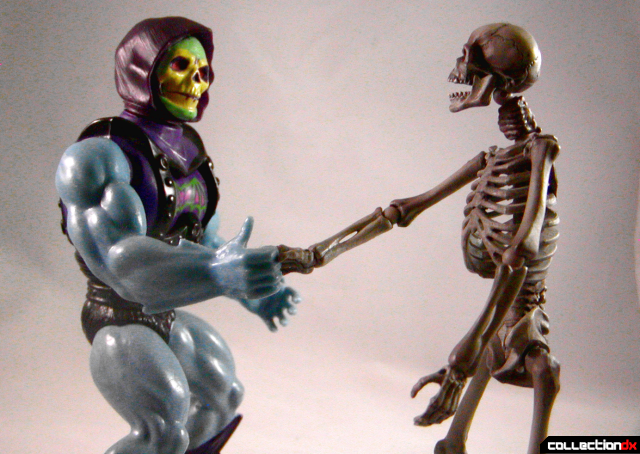 Honestly the biggest problem is the joints in the spine. They want to flop over a lot of the time and it can be extremely frustrating trying to pose it because it will keep bending in half and falling down. It took huge amounts of effort to get the Revoltech skeleton into poses like this one. At least he can shake hands with his soul brother, Skeletor. 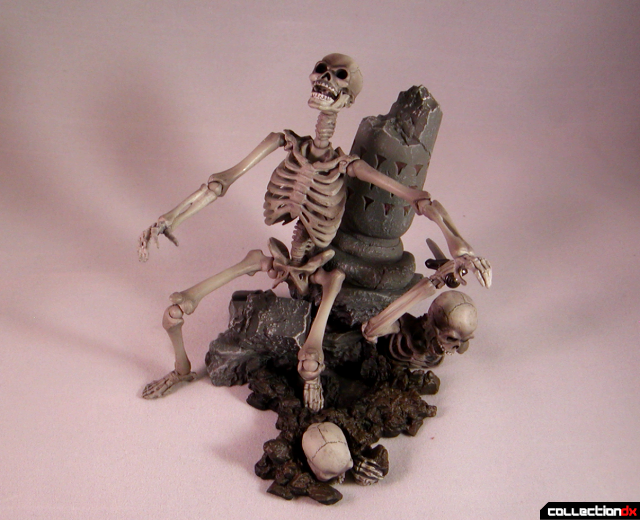 The base does look really cool and it's nice that it has half a skeleton sprouting out of it and another skull, but be aware that the peg on the base doesn't really fit into the skeleton's foot. One is round, one is hexagonal. I gather this a common thing with Revoltech and you're meant to grind them together until it fits, but this seems like a crappy solution to me. It is great that you can swap parts between the half-skeleton and the full one, though. 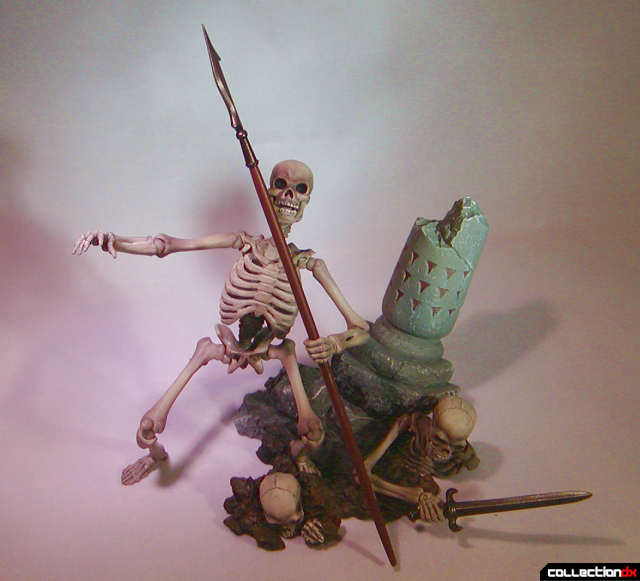 The choice of weapons is nice. The regular arm can hold the spear, which is good, but honestly I found the spear most useful for helping the skeleton stand upright. 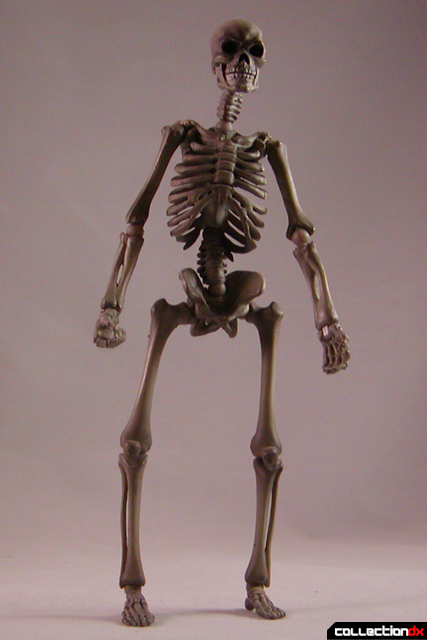 In addition to the pile of weapons, the skeleton comes with swappable hands. Here we have a fist and a more open hand. While I generally feel that tons of extra hands are kind of annoying and not that necessary, the extra choices are there for you if you want them. I'd almost prefer articulated hands but those never seem to work well at this small of a scale, so I probably would have been happy with just a fist to hold stuff. 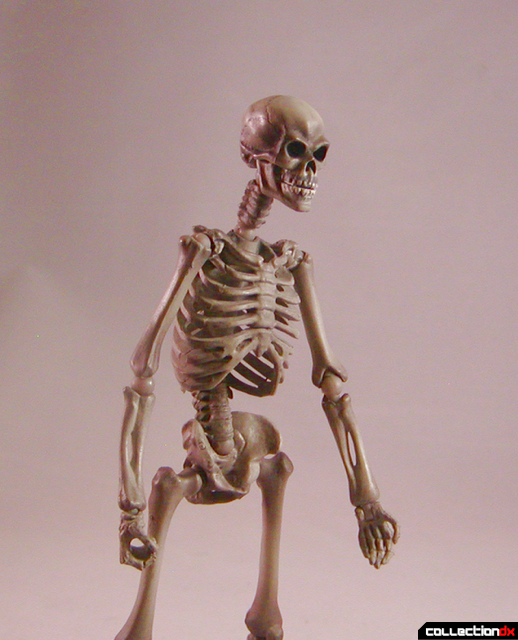 I suppose the downside to this is the fists that hold stuff can look kind of weird when there's nothing in them. Well at least this way, you can decide what you prefer and considering how floppy the toy is to begin with, I'm glad they didn't have weak articulated hands. I still would prefer well-done articulated hands, but it seems unlikely. 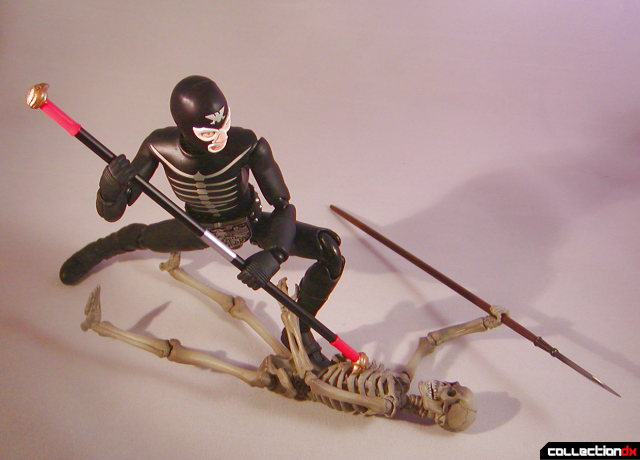 Even if you aren't specifically trying to do a Harryhausen display, the skeleton is a cool figure to have around. It makes a good generic horror/fantasy enemy, and looks good fighting other action figures. It's a little shorter than most S.H. Figuarts, but close enough that they look good together. The skeleton was ready to fall over so it didn't take much for the Shocker Combatman to defeat him! 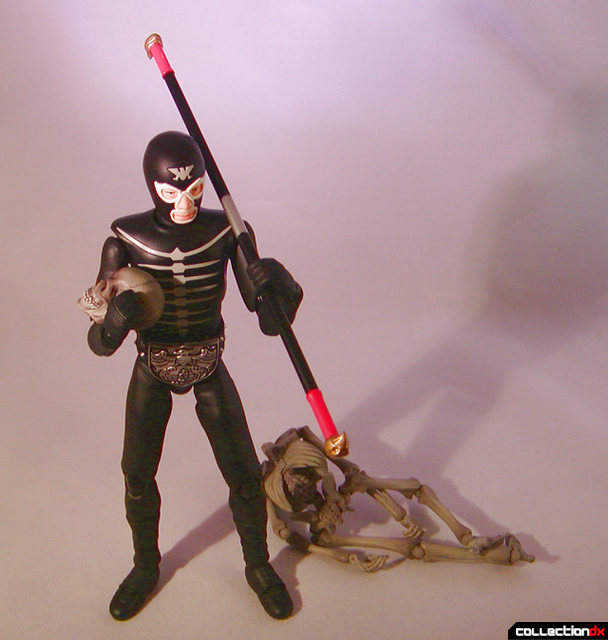 I know this is kind of ridiculous, but I almost feel the best use for this toy is victim or prop! Look how cool the Shocker dude looks carrying the severed skull leaving a crumpled pile of bones on the ground!

I wouldn't say this is an essential action figure unless you are a big Harryhausen fan, but it's very useful as a diorama filler or prop and looks great with most figures of the roughly 6 inch scale.

The biggest drawbacks are definitely the sometimes loose joints and the way the skeleton frequently flops over and falls down. It can be very frustrating getting it to stay standing. I realize this is partly because of how small and realistic it is, but that makes no less of a pain. If you can swap out the problematic joints on the spin or get lucky and have stiff joints in there in the first place, then this I recommend this toy, otherwise, be cautious.

Without a doubt, the biggest positive of the Revoltech Skeleton Army figure is its looks. The detailing is great, the painting is beautiful, and the overall appearance is very realistic and believable. While there is nothing really hiding the Revoltech joints (other than their color matching the rest of the skeleton pretty well), they don't really stick out. It's a great looking, highly poseable figure, but the tendency to collapse is a definite drawback.

5 comments posted
I remember watching this

I remember watching this movie one Saturday when I just a wee lad.
The skeletons were always the most memorable part.

The Spartoi are actually in the original myth of Jason. They weren't specifically skeletons--more like golems rising up from the ground--but Harryhausen gets definite points for sticking to the source material. It's why I like "Argonauts" far more than "Clash of the Titans".

Also, that scene with them emerging can now be perfectly re-enacted with those new Figuarts multi-part terrain bases.

I love this toy and I agree with everything in this review. This toy is pretty much essential for anyone who likes skeletons even a little bit. Fighting with Figma Link, posing ominously with pretty much any other figure, sitting in a chair with a book like a lich king... It's one of the most universally versatile toys I have.

The floppy spine joints are a big problem, though. If you need it to stay up straight, you can always turn the joints sideways, but it's really a problem if you want the spine bent just a bit forward or backwards.

Hmm never thought to try turning the joints sideways! I will have to get that a shot! Thanks for the suggestion!