Rarely do I find myself looking to purchase a Japanese exclusive repaint of American molds, but when I saw Transformers Go!'s GoPrime's seemingly Cervantes inspired pirate aesthetic for the first time, I knew I had to have it. 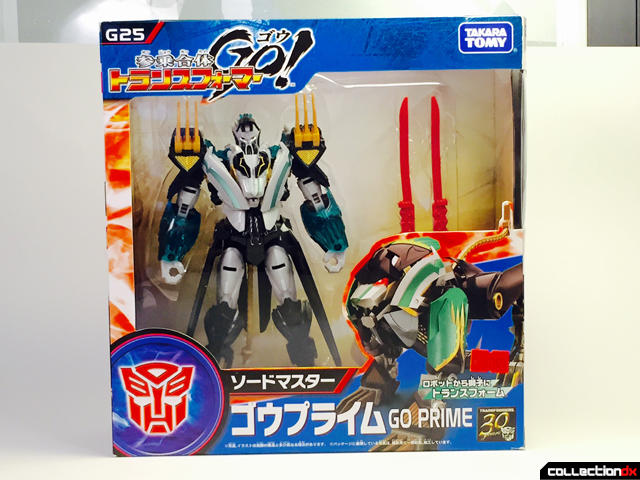 GoPrime's feet are molded in light grey and black plastic each with a different ankle and heel which was a bit distracting to me at first, but upon removing the right foot, and attaching on to one of his arms as a claw weapon/ shield, you can add even more of a pirate aesthetic to GoPrime by revealing a hidden peg leg. 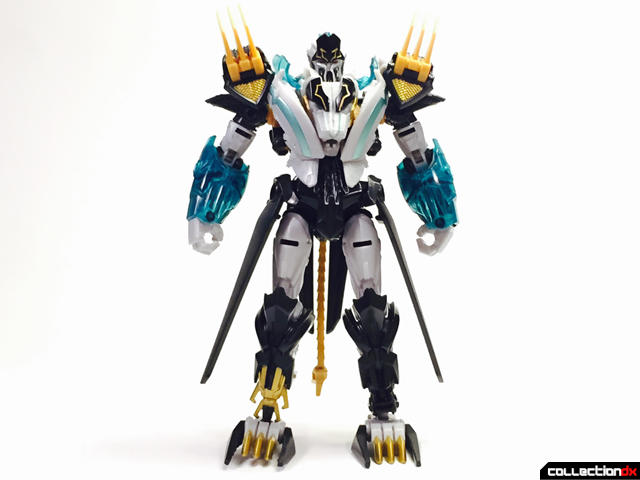 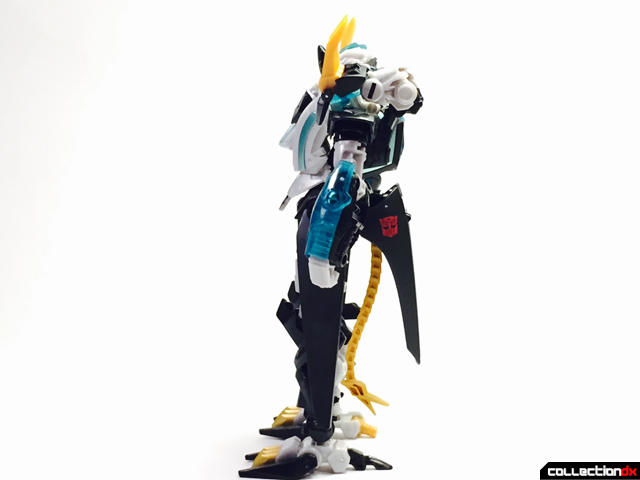 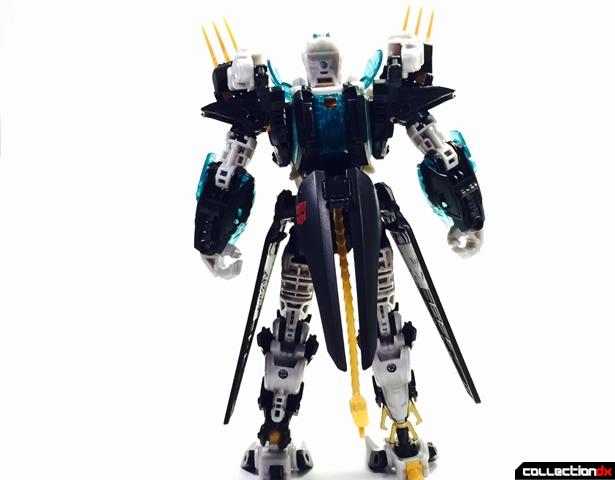 As far as the rest of him is concerned, black shin panels cover light grey inner frames on each, with thighs molded in the same color. The waist is completely molded in black plastic, with long side and back skirt armor over a soft, pliable dark yellow tail. Black, gold, and metallic blue highlight his chest, comprised of a lion head covered in additional panels to conceal it which are all rendered in light grey plastic. The arms are set on black shoulder plates, with large gold highlights, and enormous claws that add some variation to the fields of translucent turquoise on his forearms.

The centerpiece of this mode is the head, with a black and silver beard, and glaring red eyes that just look absolutely incredible. He looks ancient, stoic powerful, and proud just in the unique shapes and angles that make up his face. Pushing the pirate aesthetic further, is a black and gold crest which resembles a pirate hat on his forehead. 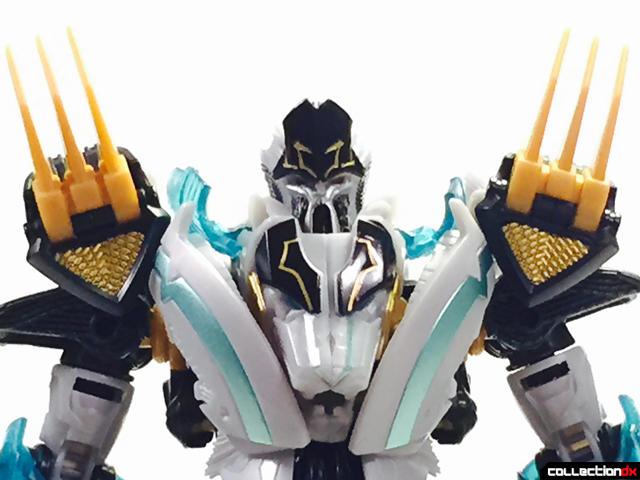 Articulation is fine as the head has very limited motion which is disappointing, but the arms and legs go forward, back, and out a decent amount. They also bend at a 90 degree angle at the knee and elbow. 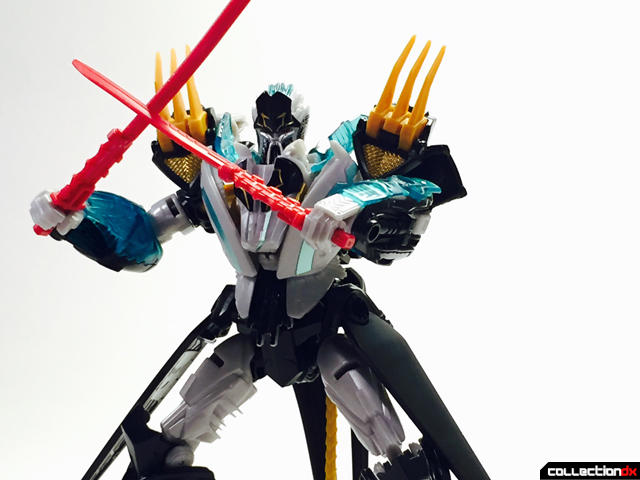 In addition to the detachable foot weapon, GoPrime also includes two maroon swords, made of a material more akin to rubber than plastic that is firmer than that seen on the tail. The swords also store beside either one of his legs. 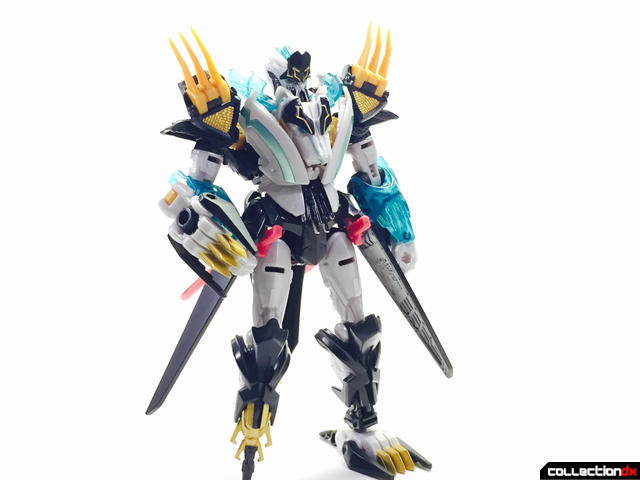 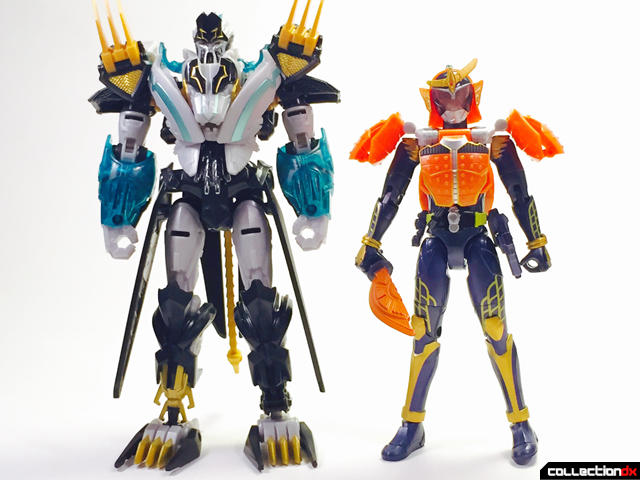 The transformation is fine, as the legs sort've just bend at the knee and rotate around, but the body in order to form the lion head, folds around and completely reorders its panels to reveal the head underneath. The arms are folded up, and form the shoulder of the beast mode, and the robot's shoulder armor forms the front legs. Simple, effective, and completely well worth the finished alt mode. 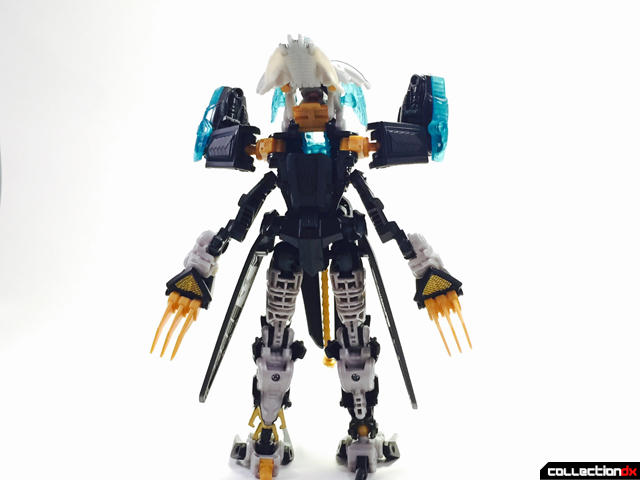 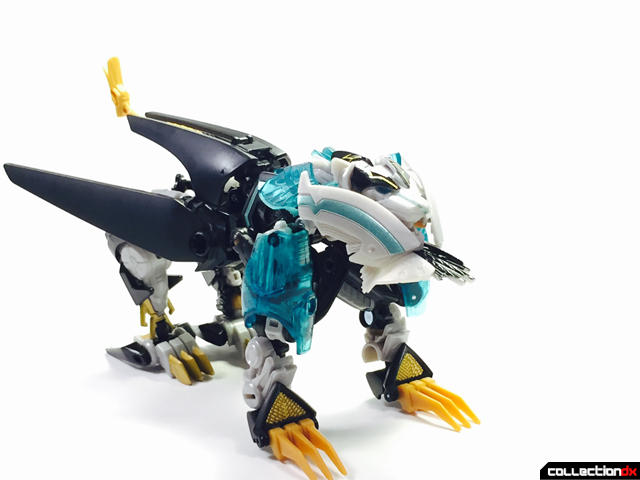 This Beast mode is absolutely amazing. Everything folds up into a convincing form that looks as though it could fight alongside the Liger Zero. The translucent arms are now shoulders, and the great flaring rakes on his robot shoulders, are now magnificent claws. The articulation is nothing remarkable, with legs that move back and forth, but nothing more than a static standing pose can be achieved. Overall, an outstanding look cosmetically speaking, but little functionality in terms of movement. 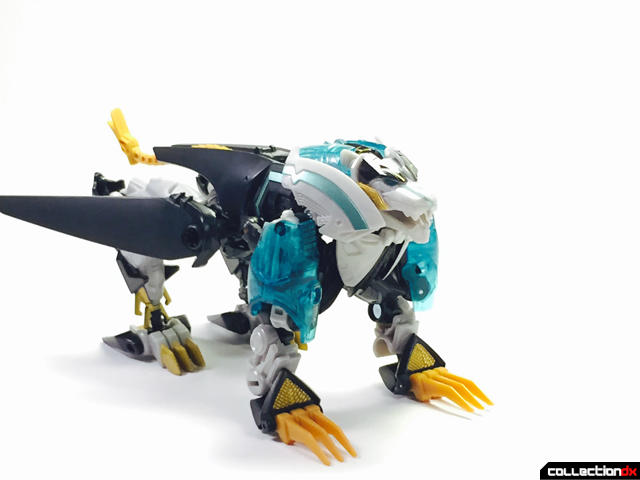 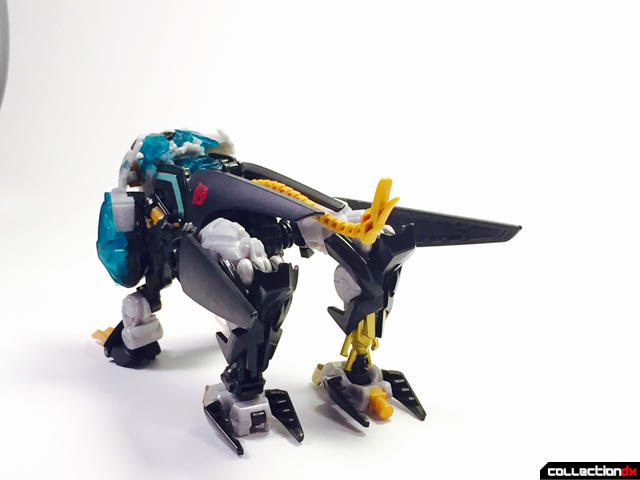 As far as Transformers go, GoPrime is not to be missed. Great articulation, deco, and sculpting in robot mode, with an equally good Beast mode, any collector of Japanese robots would be happy with some aspect of this really outstanding figure.