If my Mother of Ultra review was any indication of it, I don't really know a whole lot about Ultraman. I still love the source material though, and this figure right here makes me want to check out more Ultraman because of how awesome it is. 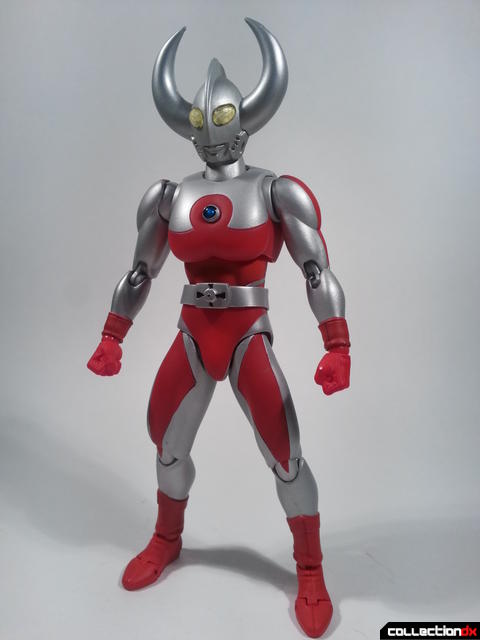 His sculpt and body are HUGE and covered in muscles! The general rule is that Ultra Acts tend to be a little bigger than SH Figuarts, and Father of Ultra is bigger than most Ultra Acts. Which basically means he's he size of the universe. 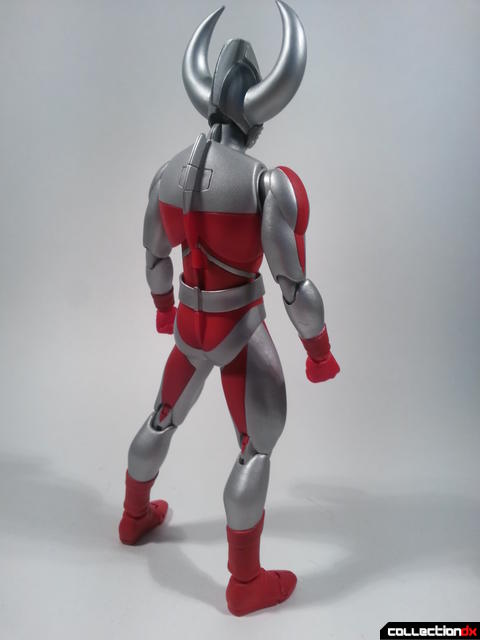 As a distinguished and older gentleman, Father of Ultra has a set of large, manly, and respectable horns to compliment his beard. 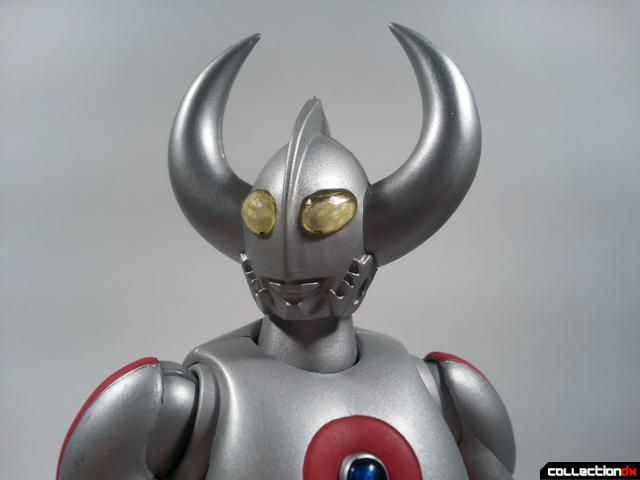 The sculpted detail on his belt is well done, but the paint is a little sloppy on my version. 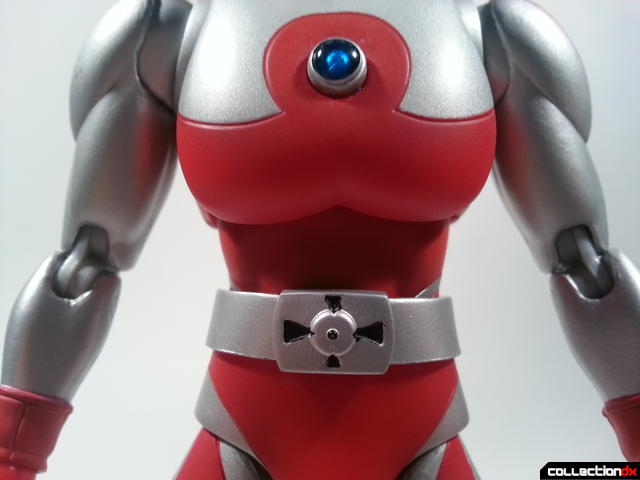 The articulation on Father of Ultra is theoretically just as good as any other Bandai premium figure, featuring the standard double jointed knees, elbows, and ankles. However, all of his muscles and girth come at an expense. His thigh muscles are so huge that he can't actually use his ball jointed hips very effectively because it gets covered up by the plastic. Father of Ultra basically has a glorified V-crotch due to this, rendering his ball jointed hips and thigh swivel near useless. 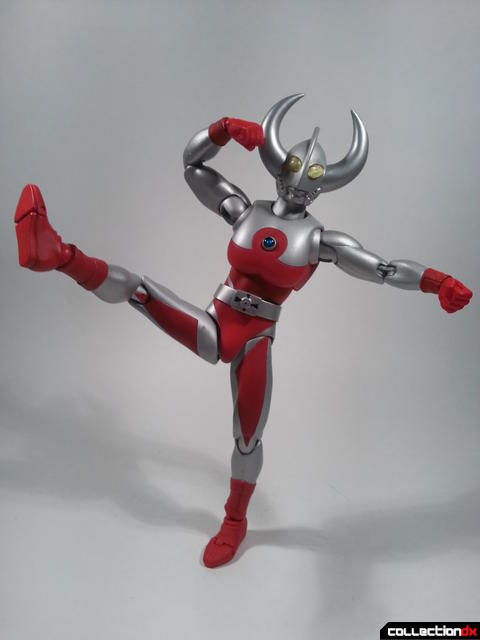 But that doesn't mean that Father of Ultra isn't a fun toy. On the contrary, he moved as well as you would expect a large muscled guy to move. He's more than able to stroke a pose, get in a battle stance, or even strut his stuff. 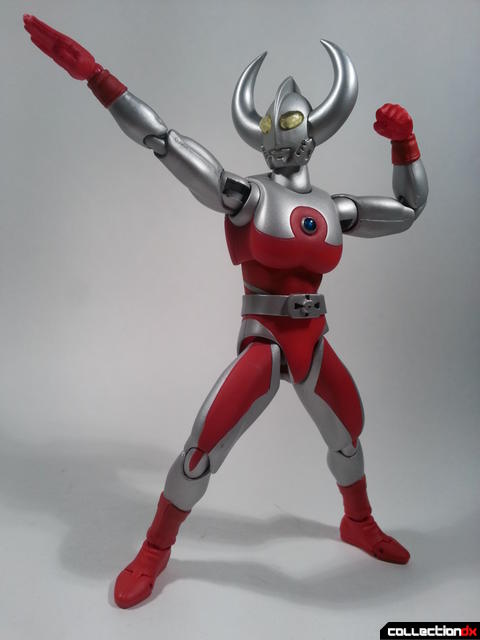 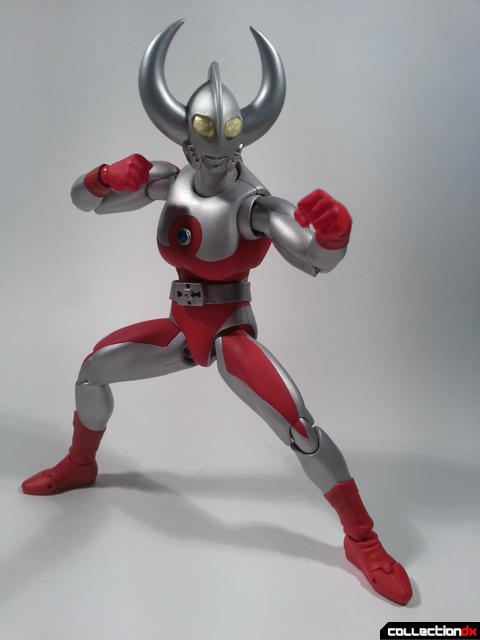 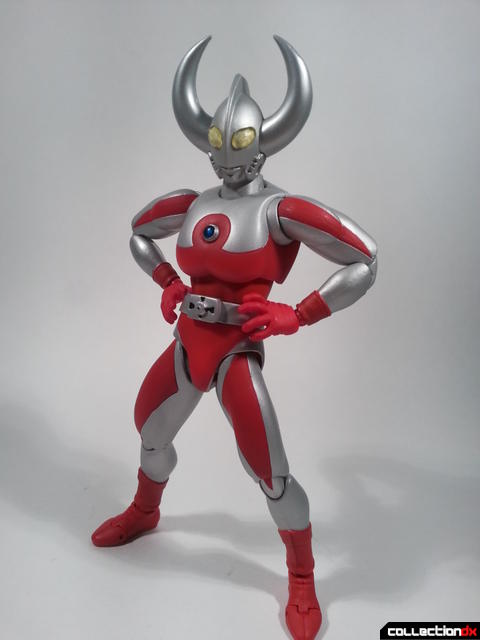 Father of Ultra comes with just a few extra hands. In addition to his included fists, he has the perfect set of, "We're gonna wrestle and I'm gonna take you down!" hands, alone with one right open hand for holding things. 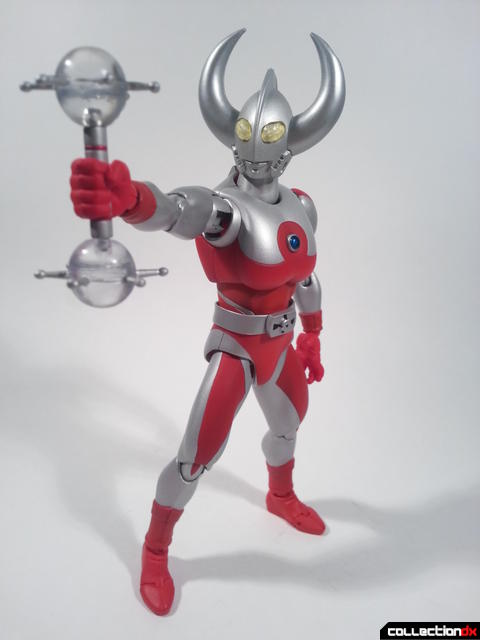 The holding hand is for his Ultra Array. Now this is another accessory from a show that I'm not familiar with. It looks very good and is crisply done. But to me, it just looks like a dog's chew toy. 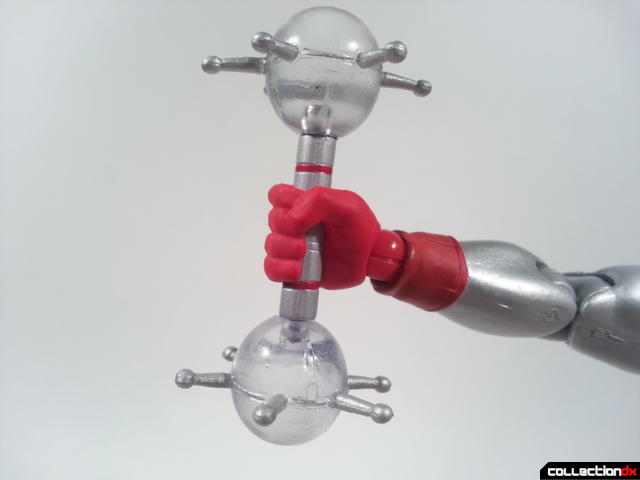 In addition to that, an effect part is also included. Like most Ultra Act figures, Father of Ultra comes with a beam attachment. His is apparently known as Father Beam, which I can only say is most appropriate. 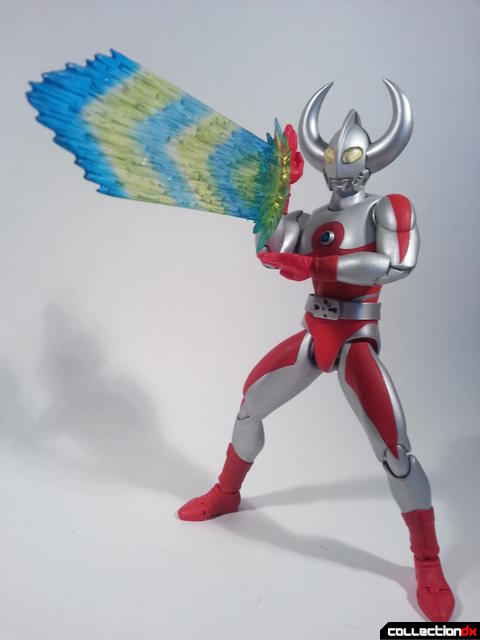 A few other accessories are also included, such as an alternate head with blank eyes, and a timer for his chest that is blinking red. These are cool and nice to have, but for me mostly just stay in the box. 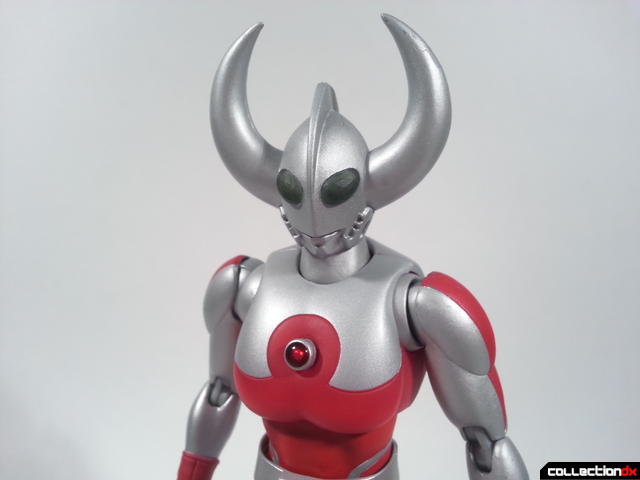 But the largest and most noteworthy accessory that he comes with his is gigantic and box-filling mantle. It's like the standard Ultraman mantle piece, except it's FREAKING HUGE WITH PAULDRONS. 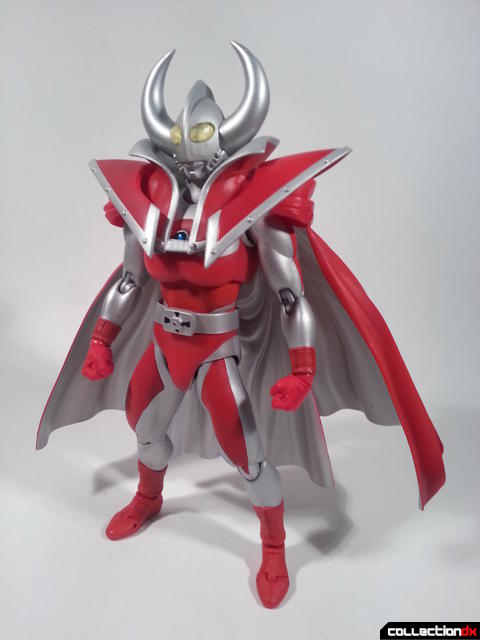 The mantle clips on to a hole in the back very securely. You do have to remove his head in order to put it on though because of how huge his horns are, but one you do man does it look good. This is a cape that wold make even Dr Strange envious. 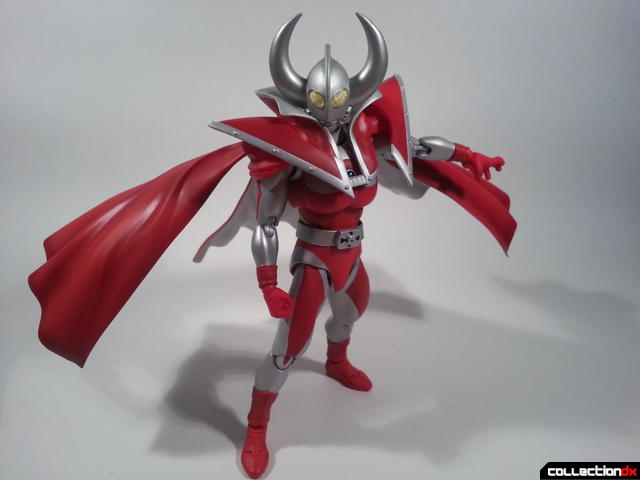 The cape is actually several pieces and on joints. The middle section can go up and down, while the side pieces can go up, down, and then left or right on a balljoint. Thanks to the joints you can make this cape billow impressively in a variety of poses. 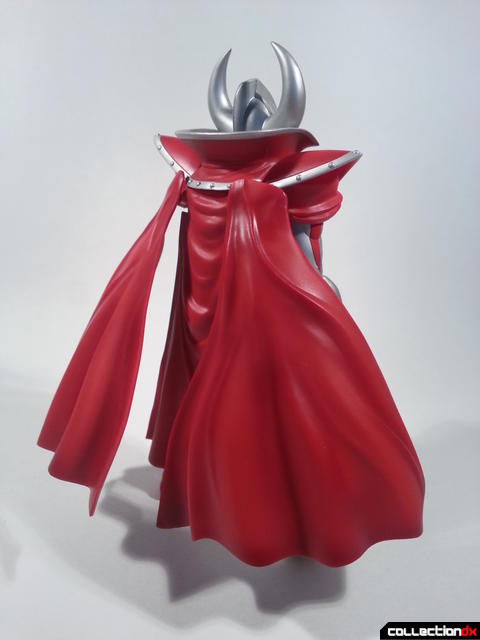 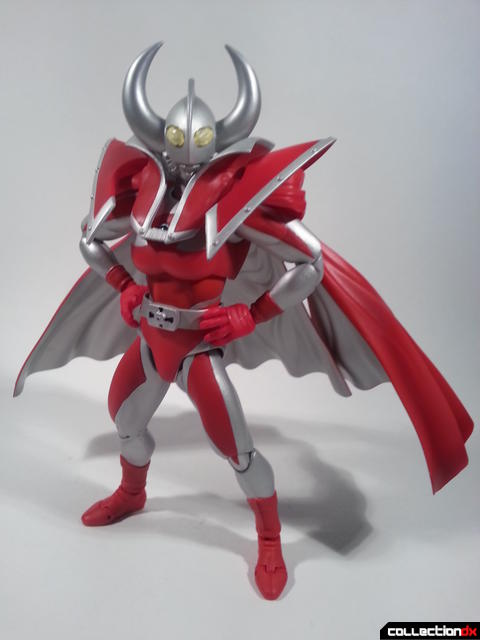 At the same time though, it's very easy of the cape to become broken up in some poses, and makes it look poor in certain angles. 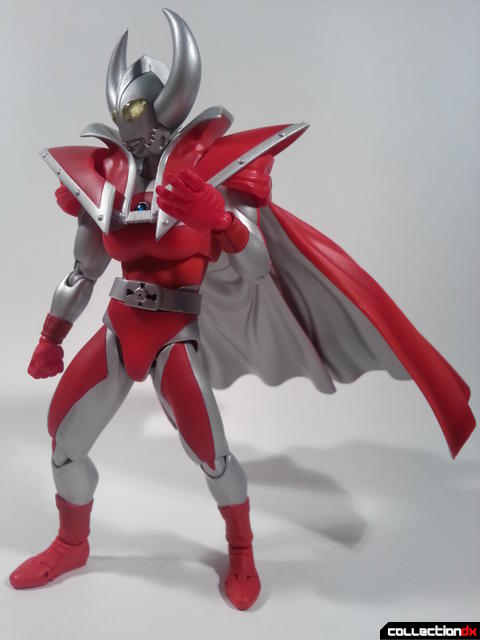 Despite all of that, Father of Ultra is easily one of the most fun Ultra Acts I've had the chance to mess with. He's big, he's beefy, he can lift anything! 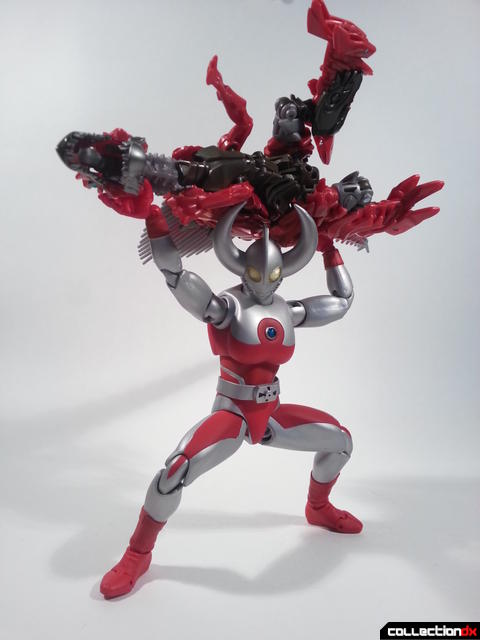 And I mean ANYTHING! 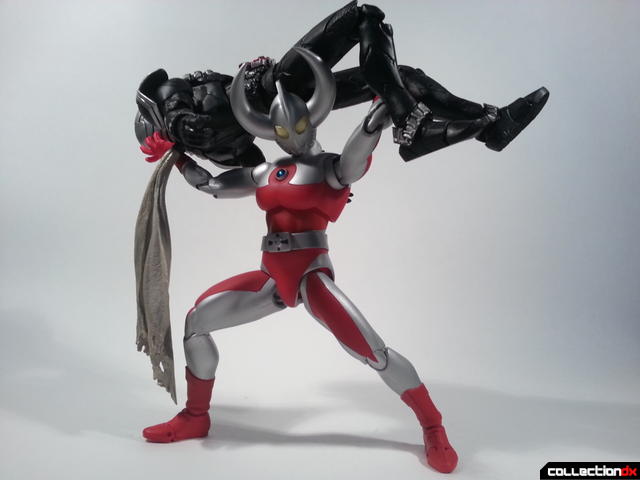 Well, almost anything. I tried making him hold Masterpiece Soundwave and then he just kind of crumbled underneath. But hey he gave it the old fatherly try, and that's what really matters