As the Kyoryuger season progresses, we are getting more and more mecha from the show in toy form. Ankydon is the third auxiliary mecha in the DX Zyuden Sentai Kyoryuger line. It is also the first mecha whose original partner is not one of the main Kyoryuger. This mecha's partner is one of the Kyoryugers predecessors, Kyoryu Cyan (Ramirez).

Ankydon comes in a box similar to that of the other two auxiliary mechas in the line so far. 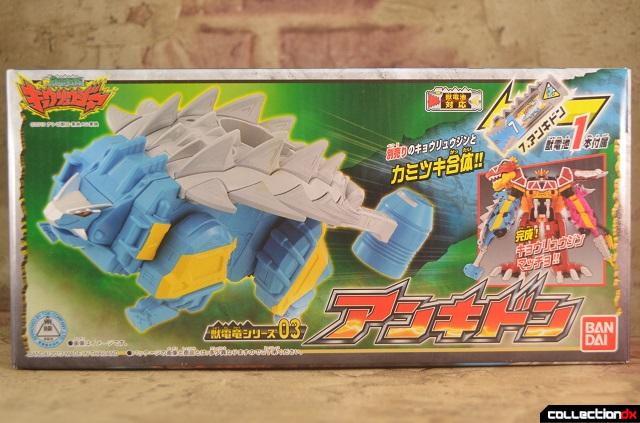 Inside of the box is Ankydon and its corresponding Jyudenchi (Beast Battery) number 7. 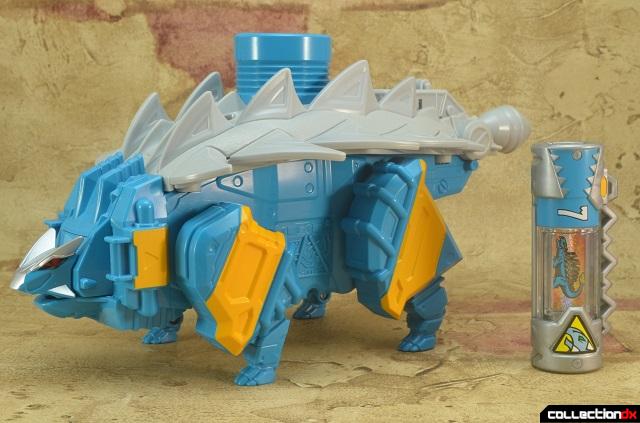 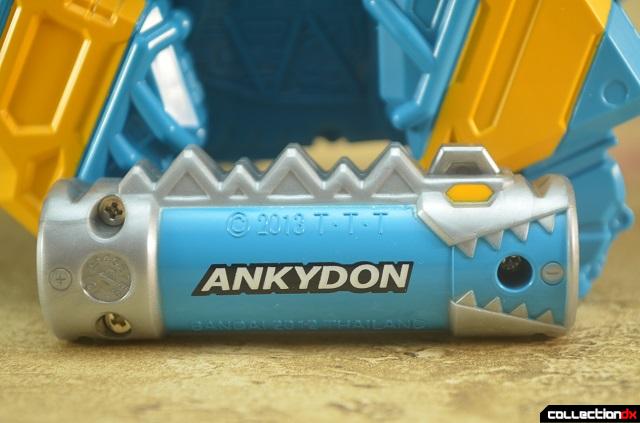 On the back of the battery is the name of the mecha and on the front it has clear plastic window that lets you see the panel inside. This panel can be flipped by pressing the switch on the top left of the battery. 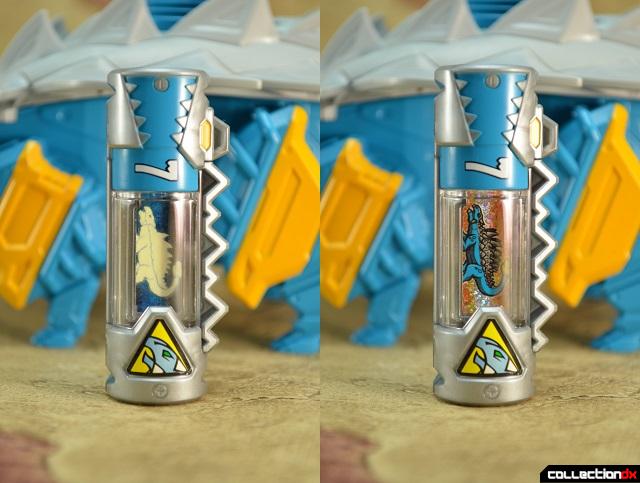 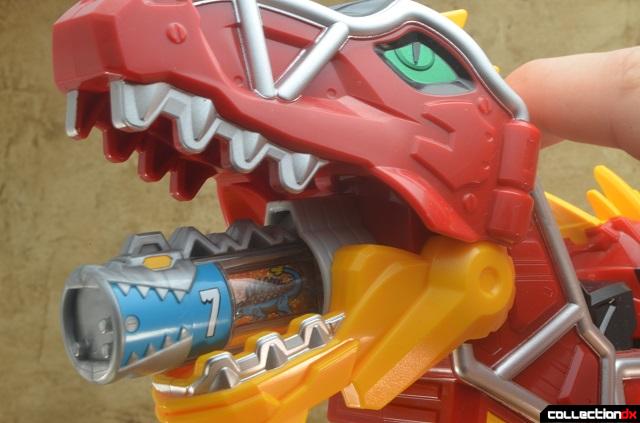 Now when the battery is inserted into Ankydon, it will cause a hammer to extend out from the spiny top of Ankydon, becoming a much longer tail for this mecha. 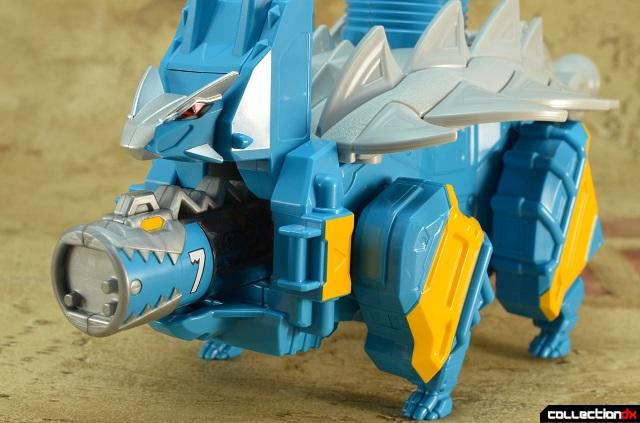 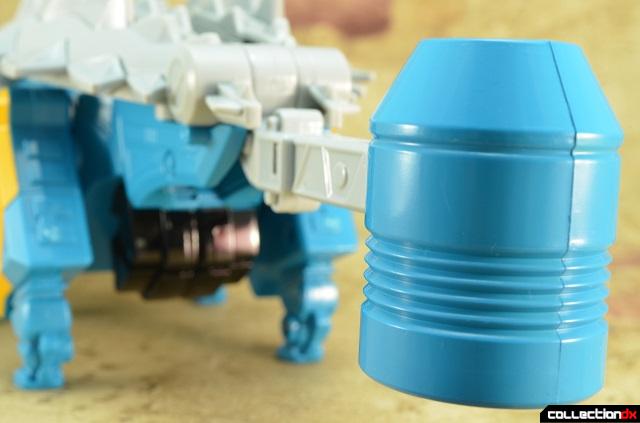 After the tail extends out, it needs to be manually snapped into place. Otherwise, you end up with a floppy tail. Ankydon derives the first part of its name from the Ankylosaurus. One of the signature features of this dinosaur is the club on its tail, which in this case is a hammer. The second part of the name can be attributed to Ankydon's hammer-tail; the “don” in Ankydon is onomatopoeia for a thumping sound; which is exactly the kind of sound that a hammer would make.

Since Ankydon originally worked with Kyoryu Cyan, it makes sense that the mecha is mainly this off blue color, with yellow and grey accents. 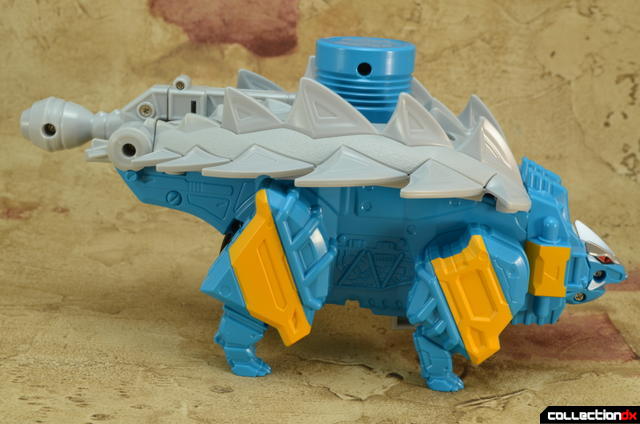 I freakin’ love the spiky armor plate on the back of this toy. 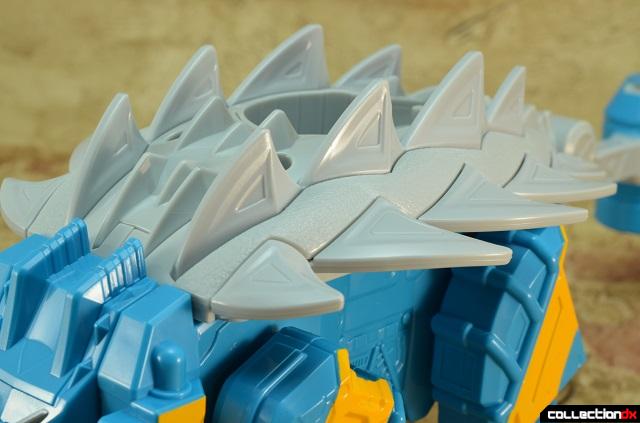 The spikes add not only height to the toy, but also depth with the horizontal spikes. While it may be kind of a minor thing, it is nice to see the sideways spikes breaking through the vertical plane that most of the features of the Kyoryuger mecha like to exist within. While the spikes may look a bit sharp and pointy, they are made out of soft PVC; so there is less of a chance that the young ones will hurt themselves with the plates on its back.

Besides having those spiffy spikes, Ankydon also has the best face sculpt of the arm mecha so far. No derpy, goofy or generic looking dinosaur face on this cyan dino. Ankydon has a cool and sharp (literally) looking face that commands respect. 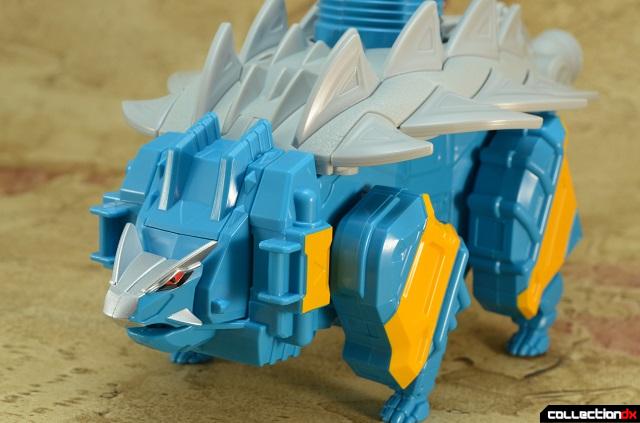 Ankydon, having a chunky dino body, has chunky underside. 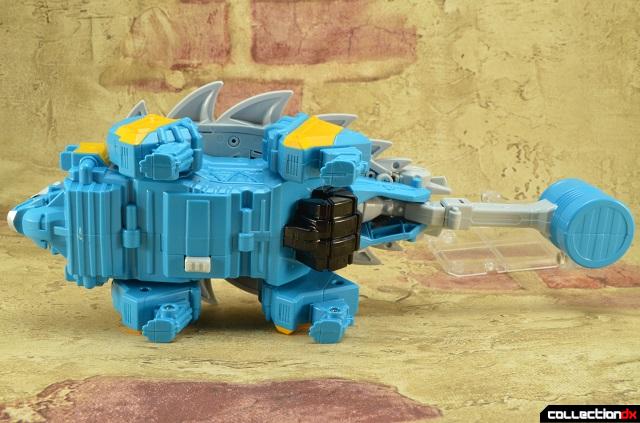 In the crotch area, Ankydon, like the other arm mecha in the line, has a hand. This is for when Ankydon becomes an arm for the Kyoryujin. While it is not noticeable from the sides or front, taking a look at the mecha from the back or the underside will reveal this piece of the mecha that should only be visible as a part of the Kyoryujin. Also, like the other mecha, it has the thumb oddly in the center of the hand. This is done so that the bodies can be used for both a right and left arm mecha. Could this mean that there will be another mecha down the line that uses this body?

So now let's get this thing ready to become a part of something greater. Prepping Ankydon to combine with the Kyoryujin is super simple: Just rotate the legs up and pop the battery out of the chamber. 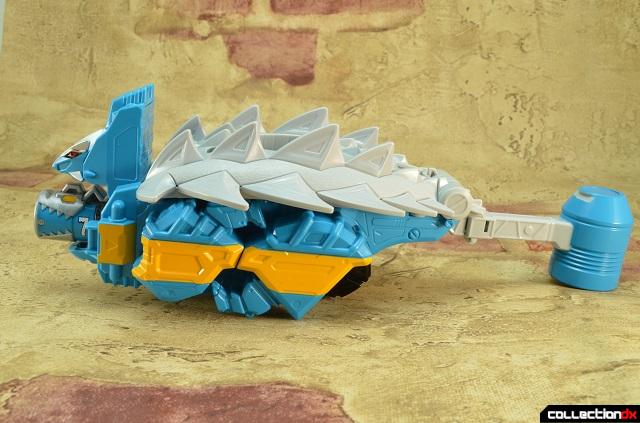 For this combination, we are going to use Dricera as the left arm, since this will create the Kyoryujin Macho.
In order to get the appropriate sounds for this combo, you go through the battery swapping procedure:

-Remove Gabutyra’s battery
-Have Gabutyra read the battery for Ankydon and Dricera
-Put Gabutyra’s battery back in
-Then you press the button on Gabutyra to play the combination samba jingle
-Once you attach Ankydon and Dricera; you hit the button once more to hear the Kyoryujin play its a jingle with a primal drum beat and say:
“Kyoryujn Macho Muki Muki ( Muscular)!!” 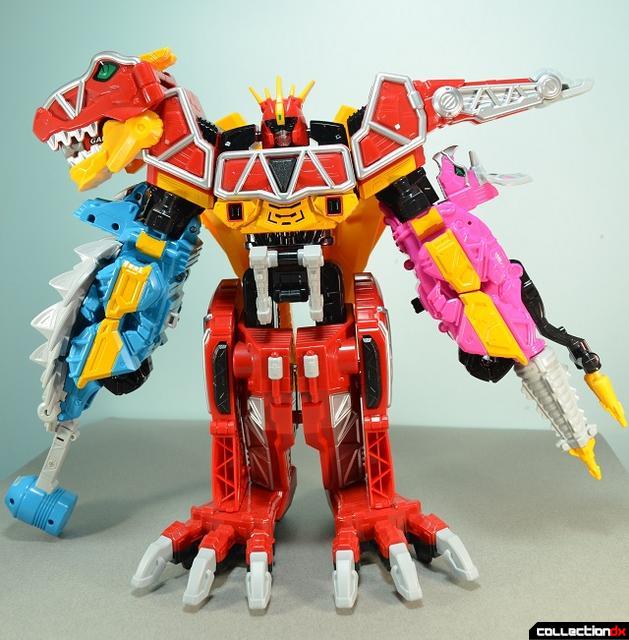 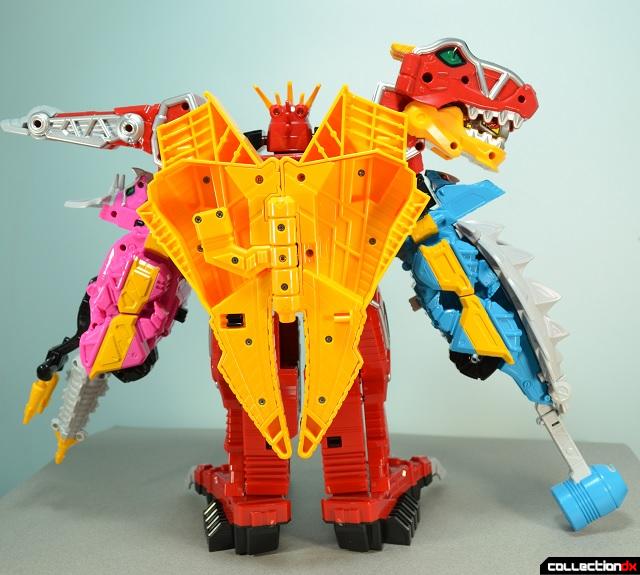 With its hammer tail, Ankydon becomes an arm with a hammer for the Kyoryujin. 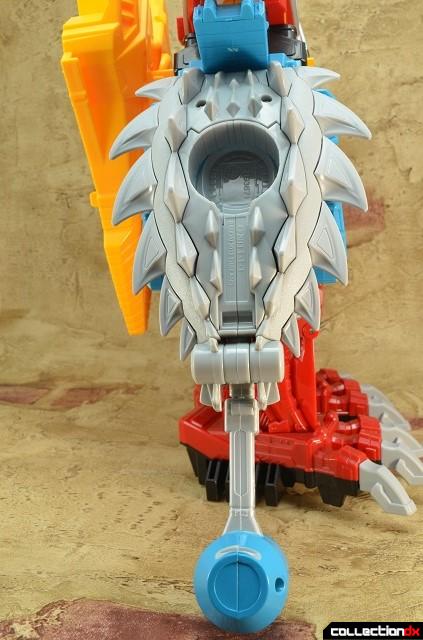 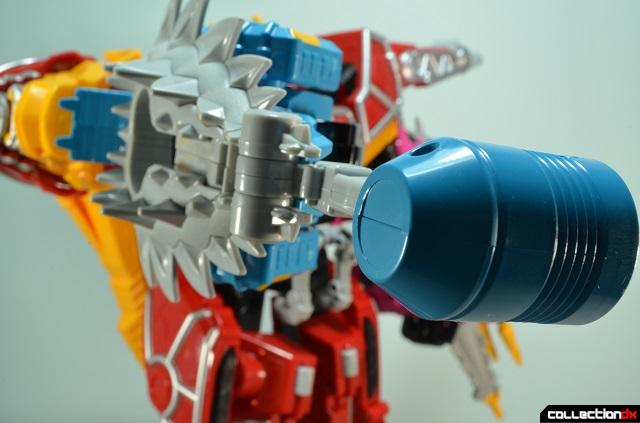 This is not so much an issue with the Macho, since you can infer as to how they decided to name this combination. The drill and hammer are powerful melee weapons, so it is fitting for them to be part of a strong manly combination. But why is the female Ranger's mecha part of the "manly" combination you may ask. That could be due to the fact that Kyoryu Pink is often portrayed as one of the guys, in terms of being at their strength level.

If you turn off the Kyoryujin’s electronics and swap out Ankydon’s battery for another one, you can then turn it back on and have Gabutyra read Ankydon’s battery to play the special attack sounds for Ankydon. You could also just dummy Ankydon’s battery from the beginning by using a different battery inside of Ankydon for the combination.

Now as an arm. Ankydon is a bit longer than Parasagun, which as I noted my review of that toy is a bit on the long side. As with Parasagun, Ankydon's tail comes very close to the ground it is standing on. With the Kyoryujin's legs together, the hammer is a hair away from touching the ground. 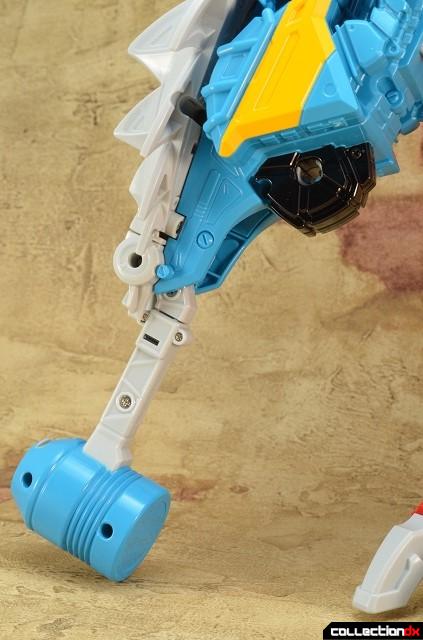 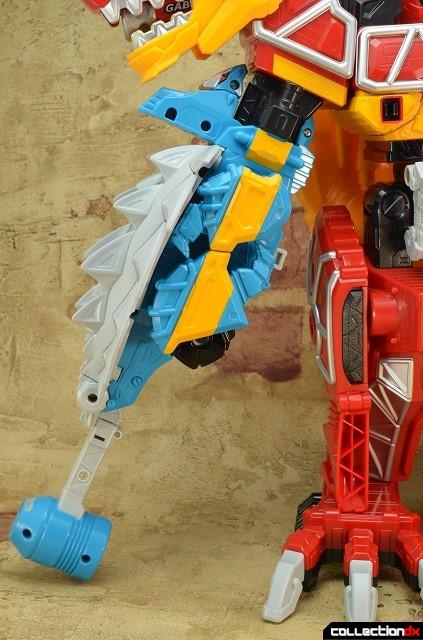 If you spread the legs apart any, then you will run into the issue of the hammer actually dragging on the floor ( or whatever surface you have it on), Luckily, you snap the tail back a bit, so it comes down at an angle and gives the head of the hammer a little extra clearance space. 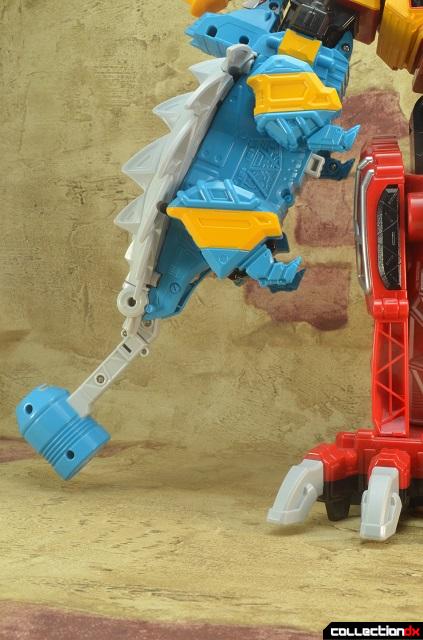 The hammer is merely for imaginative play, since the hammer does not have any gimmicks besides its release when the battery is inserted into Ankydon. Since the battery chamber is not accessible in Kyoryujin form, you can't even play have fun extending the hammer over and over.

I found it a little odd that the hammer is sideways. But that is how it appears in the show and is used to attack sideways. The fact that this is accurate to the show does not detract from that fact that it would have made more sense for the head of the hammer to point downward. This way the toy can use it ratcheting shoulder joint to perform the devastating downward attack. 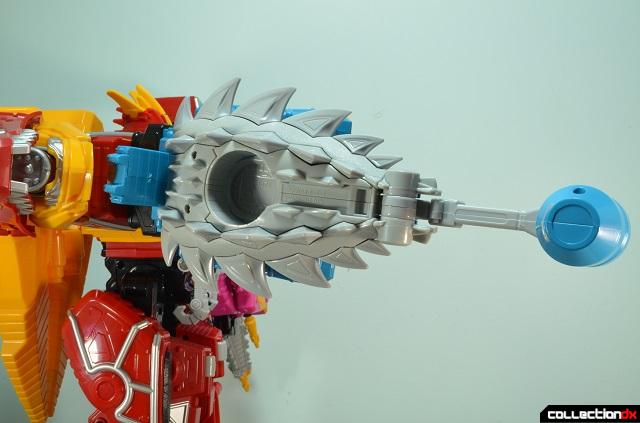 Besides the length of the arm and the odd placement of the hammer's head, the only other nit-pick I have with this toy is the placement of the Bandai copyright and manufacturing info. Dricera and Stegotchi do not have the copyright info anywhere on them because they were included with Gabutyra, which has the copyright info for that set of toys on the inner thigh. As for Zakutor and Parasagun, they too have the info on the inner thigh. This works great for those mecha, because you don't have any clearly visible letters on the toys. Since Ankydon has stubby legs, Bandai decided to put this info inside of the recess that the hammer tucks into, so the letters are visible whenever the hammer is deployed. Granted this was a necessary evil, since I suppose this was the best spot to put this info in. If you look at Ankydon's body, any spot on it would either not work or be visible in some way. 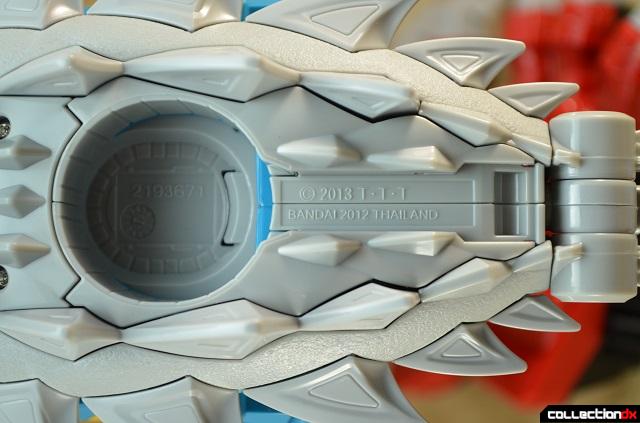 So after spending some time with Kyoryu Cyan’s Jyudenryu, Ankydon, I have to say it is second favorite mecha so far, after Gabutyra. PLEX took the Ankylosaurus and turned it into a cool looking dinosaur mecha that also works as a hammer... kind of. 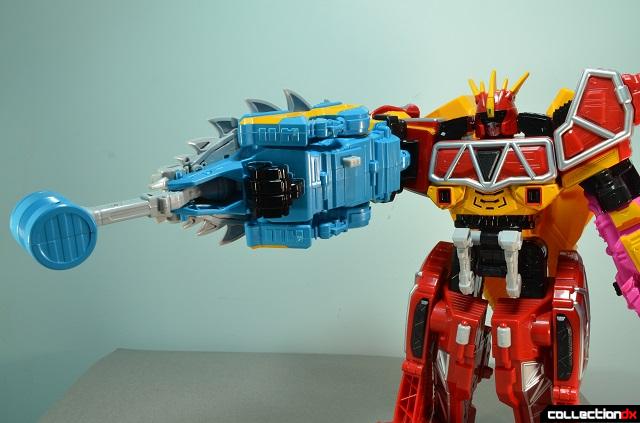 My only major gripe is that although this is the third auxiliary mecha in the line, it doesn't really bring anything new to the table. The battery gimmick, including the sounds and ability to release the weapon of the mecha, has started to wear a little thin with me. Granted I am not the intended audience for this toy, so it is quite possible that kids in Japan are having a blast with the beast batteries of this line. That being said, I cannot wait to check out Pteragordon, since that should be a more unique experience in the Kyoryuger line.

I love the fact that the hammer was molded with a sort of "accordion fold" section like one of those novelty honking toy hammers.

And yet it is a powerful weapon. It is pretty funny and ironic that it was made that way. Perhaps it is to lessen how dangerous the weapon looks, since Kyoryuger is aimed at a young audience.