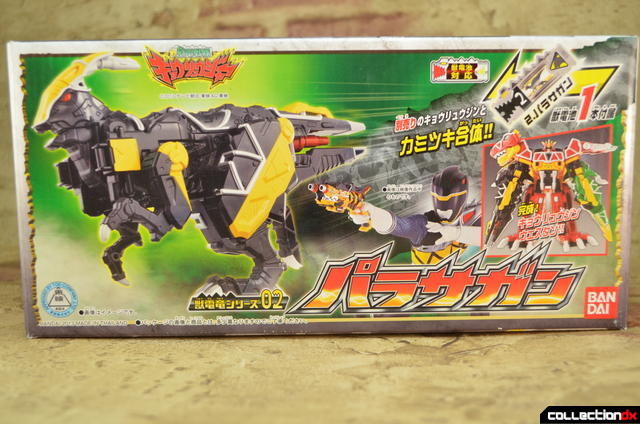 In the box you will find Parasagun and it's Jyudenchi (Beast Battery), which is number 2.
With the press of the switch on the top left of the battery, the panel inside of the battery flips between “dormant” mode and “brave in” mode. 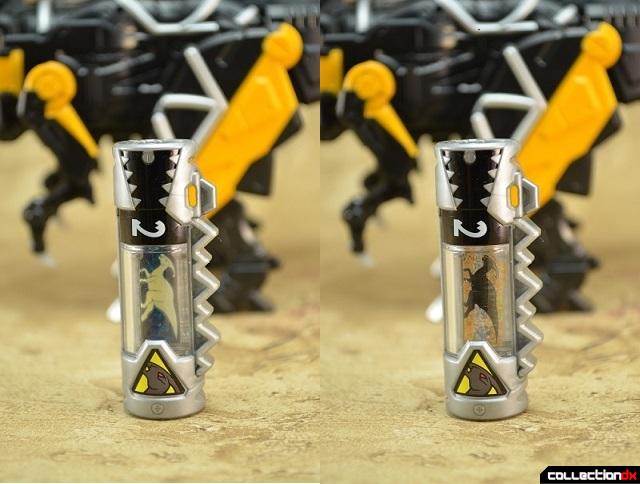 When the battery is inserted into Gabutyra, the battery will elicit at “Gaburincho! Parasagun!’ from the T-rex’s electronics. 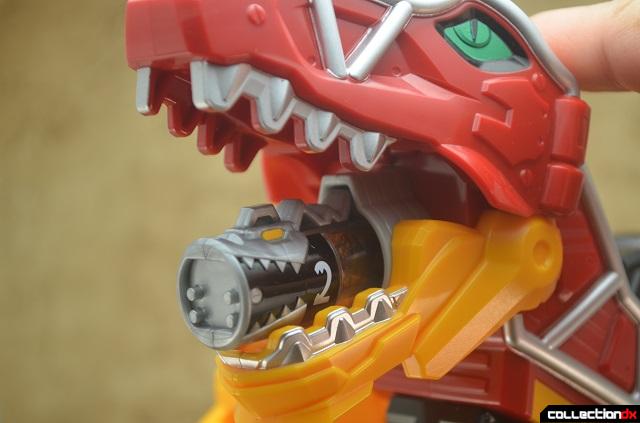 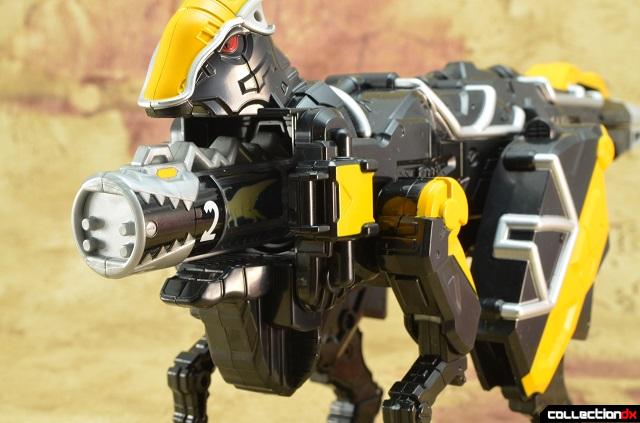 When the battery is inserted into Parasagun, the tail splits open to reveal a sweet looking rail gun! 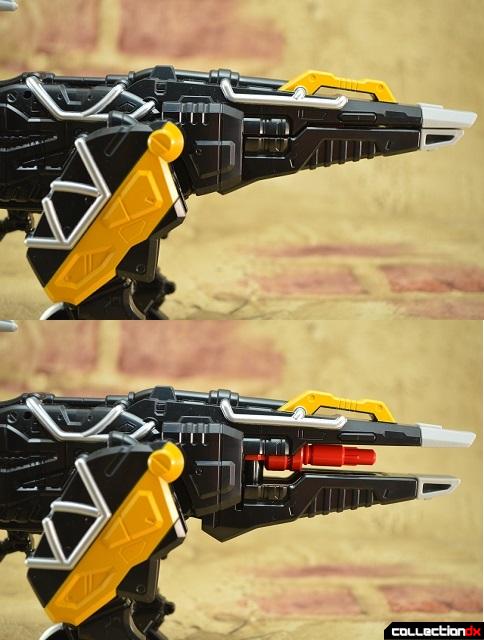 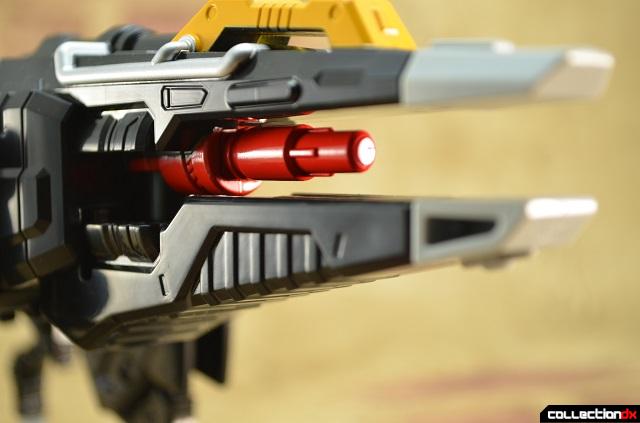 That gun looks like it could just murder... I mean defeat plenty of baddies.

With the BFG on the rear of this mecha, it certainly lives up to its name. The “gun” in Parasagun is an onomatopoeia for the sound a gun makes, the Japanese equivalent to “bang”. Meanwhile, the “parasa” stands for dinosaur that this mecha represents, which is a Parasaurolophus( which means “near crested lizard). So besides the big gun it is totting in its behind, it is also fitting that Parasagun also packs gun on the back of it's crest. 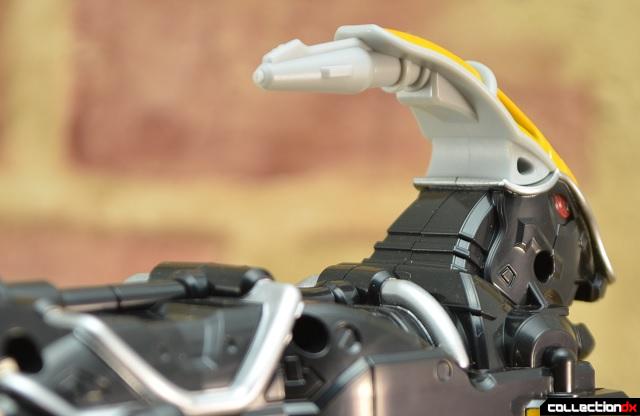 Parasagun is the trusty companion of Kyoryu Black, which is why the mecha is black, with the yellow and silver accents that are a signature of the Zyudenryu. The color combination is especially good for this toy because black goes well with just about every color. 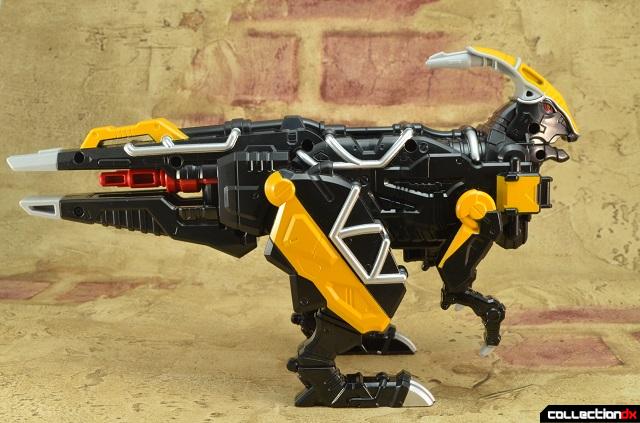 The paint apps good quality, as you would expect from Bandai of Japan. 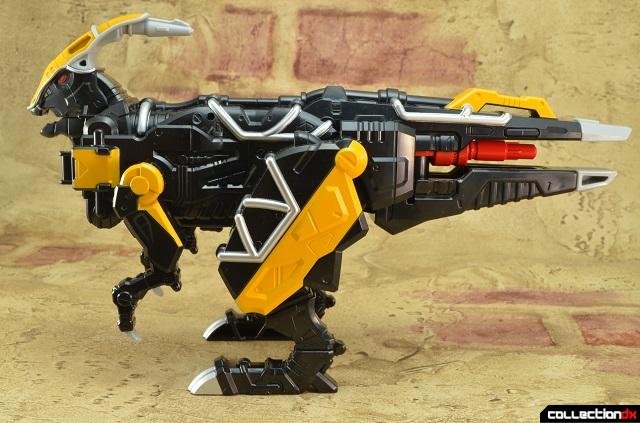 Parasagun shares a good chunk of its design with Zakutor. It re-uses the body, arms and upper legs from Zakutor; while the hands, feet, head and tail are unique to each mecha. 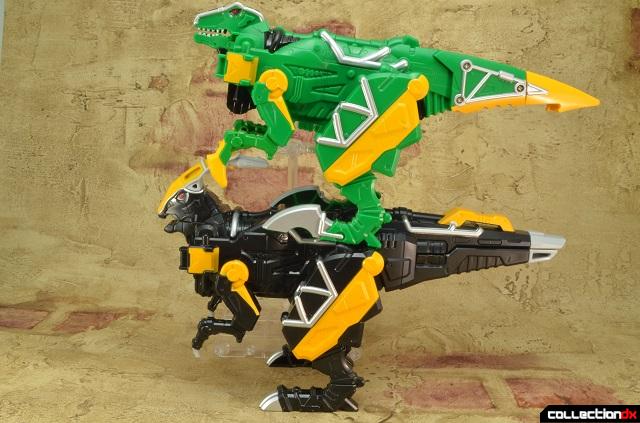 I was unhappy with this recycling of designs with Dricera and Stegotchi, and I am still not pleased with this design choice on PLEX’s part. It is a lazy, cost-cutting measure that hurts the cred of the Kyoryuger toy line. Buying an accessory mecha should present a chance to experience a new toy. I should not just be a rehash of another toy in the line.

That being said, I think Parasagun is the superior of the two mecha using this body type.
Sure, Parasagun's has flat features, like the other mecha in this line. However, unlike his companion mecha Zakutor, the flat design works with the look of Parasagun. 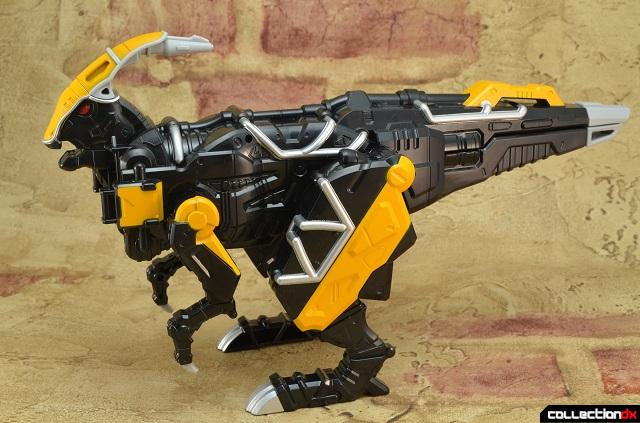 The only feature of the Parasaurolophus that is not properly represented is the neck, which is very short on Parasagun. However, it is easy to see why this was done; had they made the neck longer on Parasagan, it would have made an arm for the Kyoryujin that would reach further down that its feet.

Anywho, another thing I like about this toy is that the hand on the underside of the dinosaur just blends in with the toy because of the fact that both the mecha and the hand are black. This makes Parasagun the only of the “arm” mecha in this line that can camouflage the one piece that is only supposed to be visible when it is attached to the Kyoryujin and I really dig that. I am not a big fan of hand parts being visible in a toy's non-arm mode. With the Kyoryujin line, the choice to have the arm present at all times probably has to do with the fact that if it were hidden inside of the body, it would interfere with the tai gimmick and/ or battery chamber for the toy. 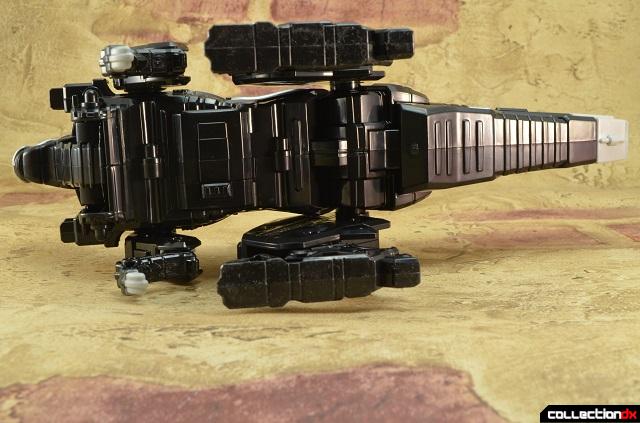 As for articulation of the arms and legs, Parasagun 's can rotate at the shoulders and hips; it also has the same joints at the elbows and knees as Zakutor, which is to be expected, since they are at the core the same toy. 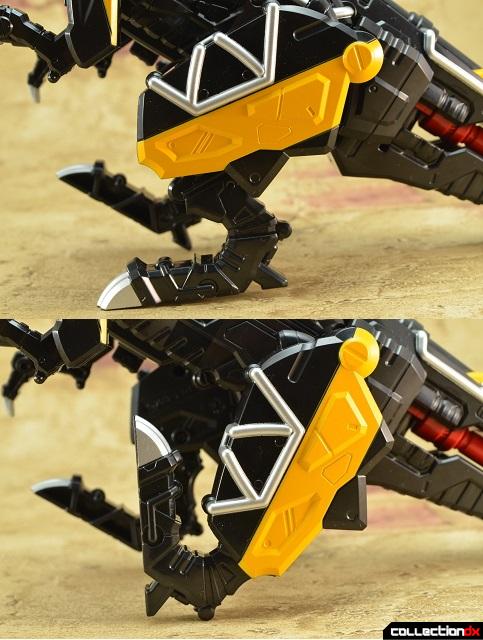 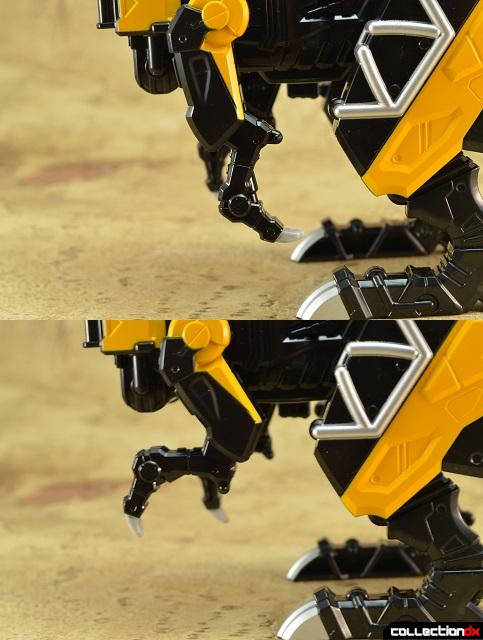 Pushing the legs back, locking the arms underneath the legs and ejecting the battery is all that is needed to get Zakutor ready to combine with Gabutyra. 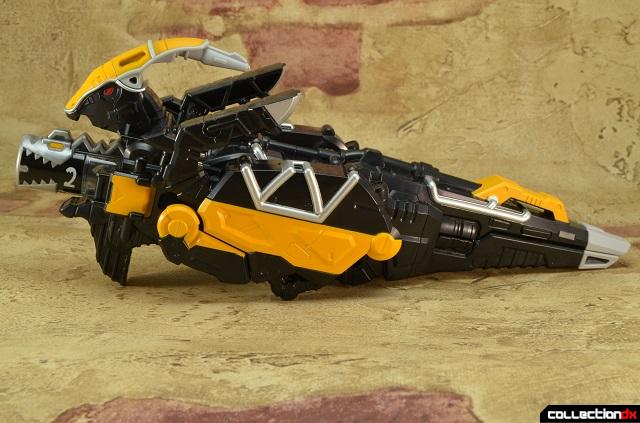 Then if you want the transformation sounds, and trust me you do, you do go through battery swapping/ reading process with Gabutyra: 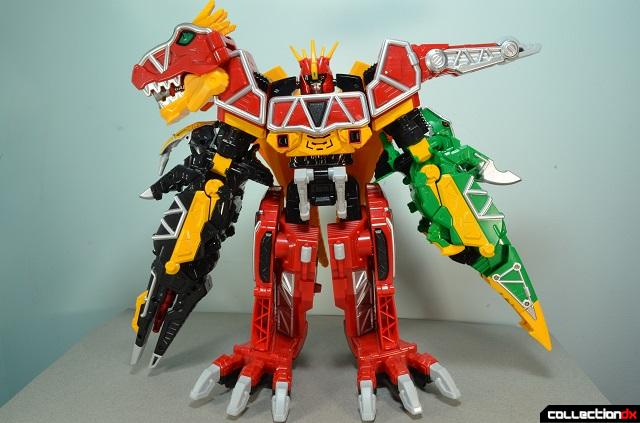 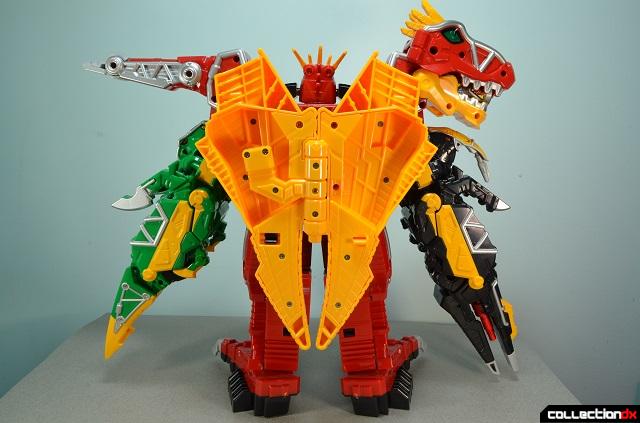 The Kyoryujin Western has a claw on its left hand... 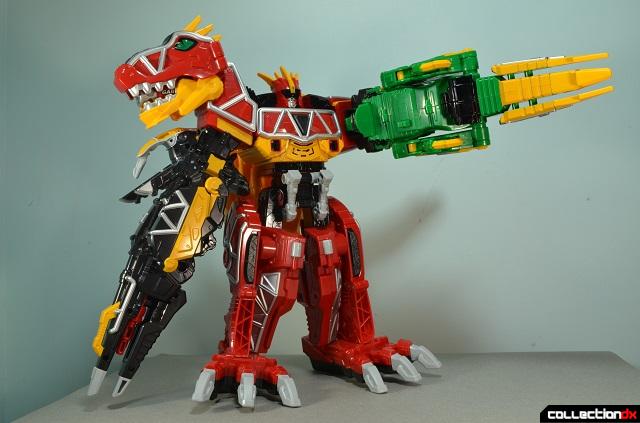 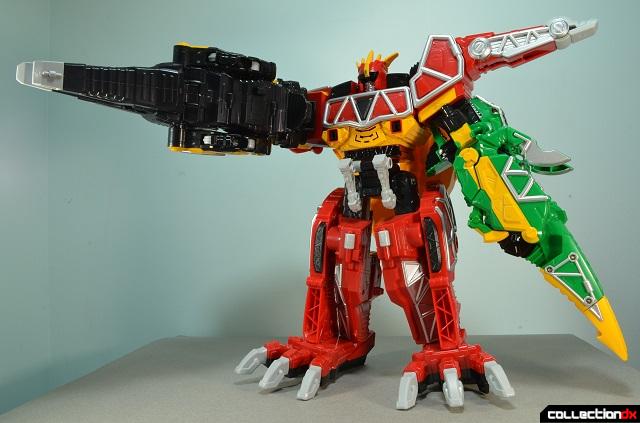 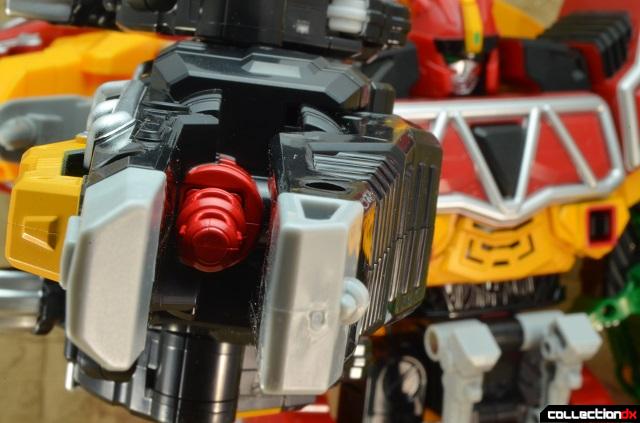 So you have to ask yourself: Are you feeling lucky Paramonster punk?! 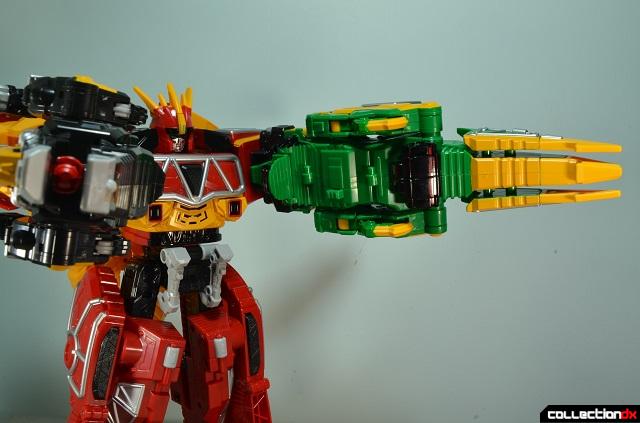 So I never quite understood what made the Kyoryujin Western a Western design. Its left arm is a claw. How that fits into the Western motif, I have no clue. Sure it has a gun, but it resembles a rail gun more than anything that was us in the Wild West. It would have made more sense if the gun on Parasagun's tail looked like a six shooter or an old Winchester rifle. So in the end, nothing of the design screams, or even whispers, the Western theme the toy is trying to represent. That being said, I freakin' love how cool Parasagun's gun looks on the Kyoryujin, as non-Western as it may be.

2) You can dummy the battery inside of Parasagun to begin with.

These methods are possible due to the fact that the buttons inside of the shoulders of Gabutyra only contain buttons, not battery readers; so any battery( or object really) that pushes the button will work, it does not need to be the battery that belongs to that mecha.

One nitpick I have with this toy, is that as an arm, it is longer than any of the other“arm” mecha, resulting in the tip of the gun being about an inch- 1/2 inch away from the bottom surface, depending on how far apart Gabutyra's legs are. This is why I mentioned earlier that a longer neck on this toy would have not worked, since the gun already hangs so low on the Kyoryujin. Besides being almost too long for the toy, the arm is also too long for the design as it appears on the show. 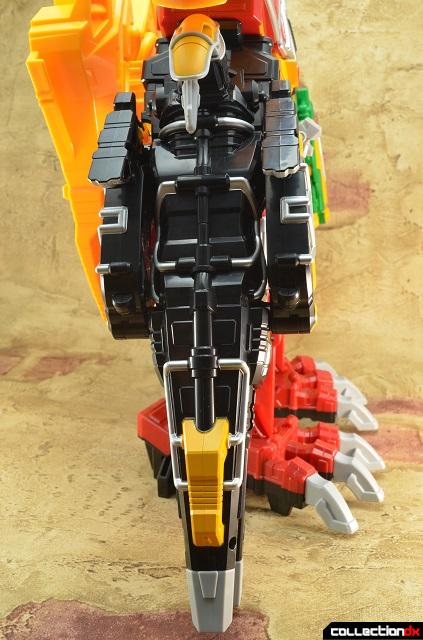 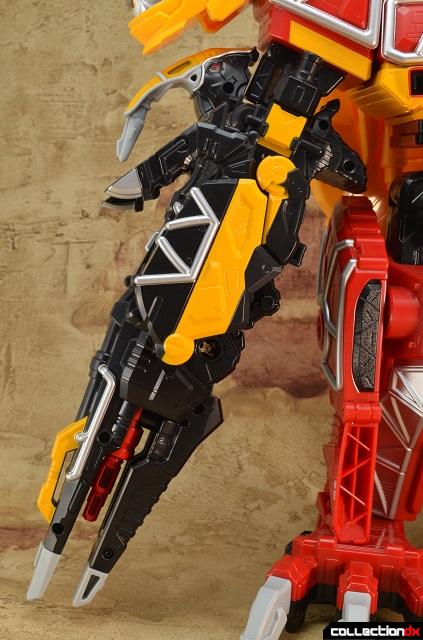 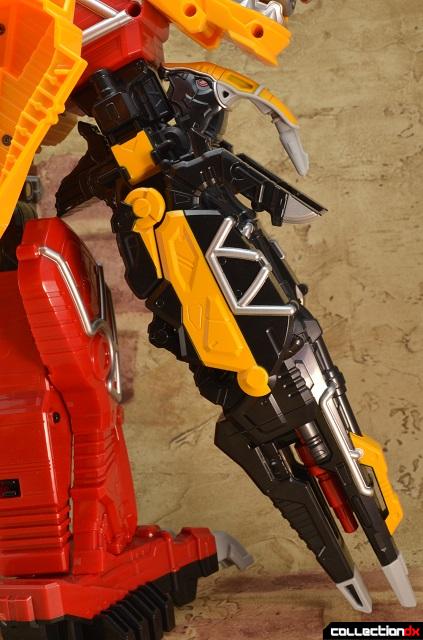 The only other issue I had with this toy is that jaw pops off quite frequently. But it goes back on almost as easily as it comes off, so it is only a minor issue.

While Parasagun is a recolored, redesign of the Zakutor (or it could have been the other way around), Parasagun is much better than Zakutor because it pulls of being a good representation of its respective dinosaur and becomes a cool looking weapon. It is a tough toy that can take a beating, so it succeeds at being a good all-around toy!

I'll try not to go too blue here, but man oh man that battery insertion gimmick is uncomfortable to look at.

I think it's quite sensual.

Not a bad review, of course with how simple the arm zyudenryu are there isn't much to be said of each on their own.

Also, just as a personal preference I'd rather see ankydon get reviewed before pteragordon.

Thanks. It makes it harder to talk about the arm mecha when they share bodies with other mecha.

Also, Ankydon will probably be reviewed first since I have to wait to get Pteragordon from either a US site or wait for a re-stock to happen on one of the Japanese sites.

That being said, I am going to take a break from the Sentai and do a little bit of Seiya for a couple of weeks. I need to live up to my name.