It still boggles my mind that it's been ten years since Gundam SEED came out. However with the 10th anniversary, we've been given the TV series remastered in HD along with a slew of rereleased kits and toys including the Aegis Gundam's introduction into the Robot Spirits line.

The Aegis Gundam is one my favorite designs from Gundam SEED standing out as one of the more unique designs. Piloted by the Athrun Zala, the Aegis Gundam is able to transform into a giant claw mobile armor and has a powerful Scylla cannon along with four beam sabers.

Like most Robot Spirits toys, Aegis Gundam comes in your standard box. Out of the box, you need to do some slight assembly by installing the binder on his back. 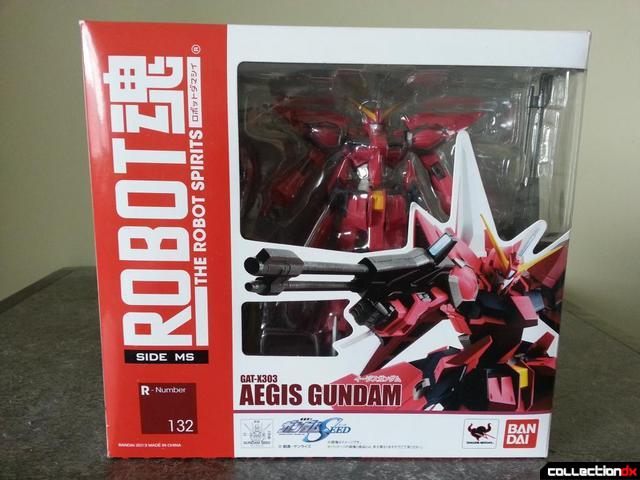 The Aegis Gundam is a slender, pink, and pointy robot and the toy does an excellent job of capturing its original design. 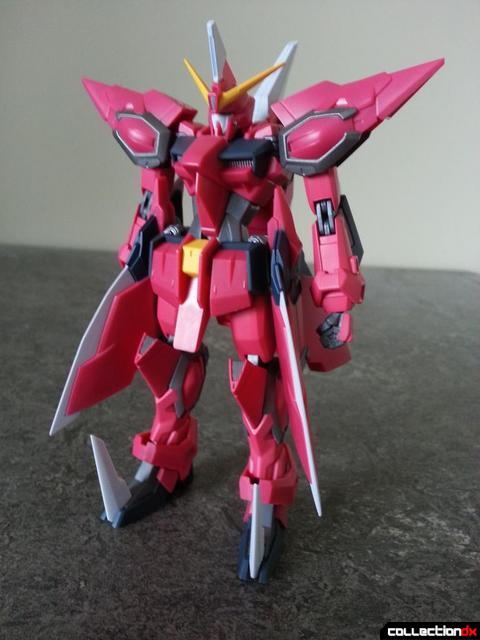 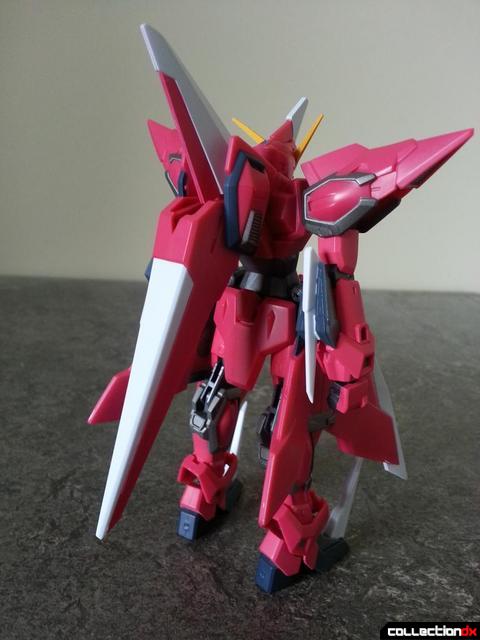 Though all of the details are there, some of the paint work seemed a little sloppy on my copy's crest, and skirt armor. Nothing too noticeable, but definitely worth mentioning at the least. 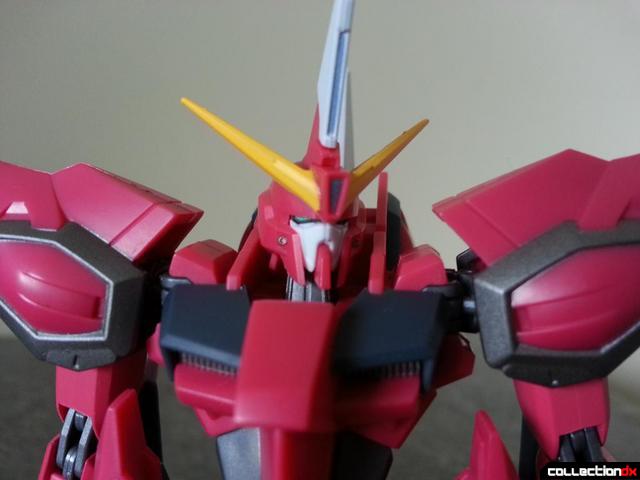 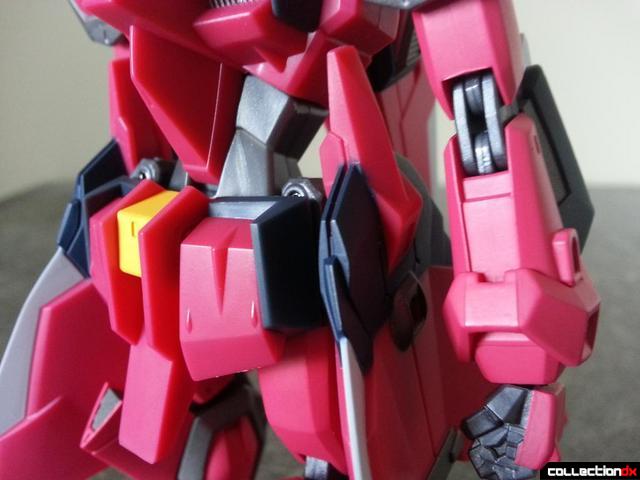 Aegis Gundam is loaded with articulation and moves like a dream. The elbows and knees are double jointed with the hips and shoulders on universal joints. The shoulders can also pivot in and out similar to the joint that the various Brave SRCs have featured. 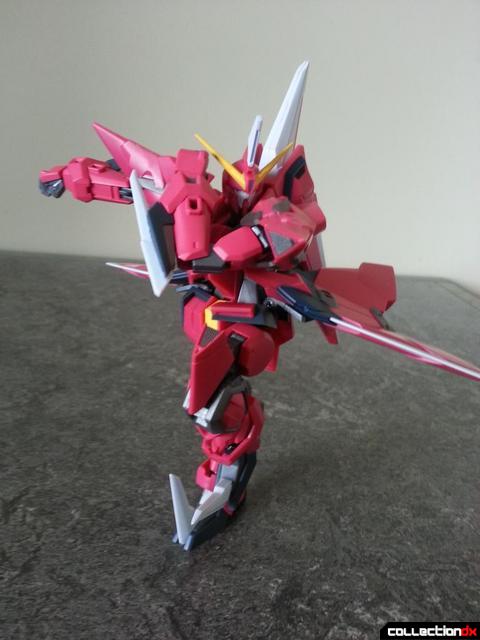 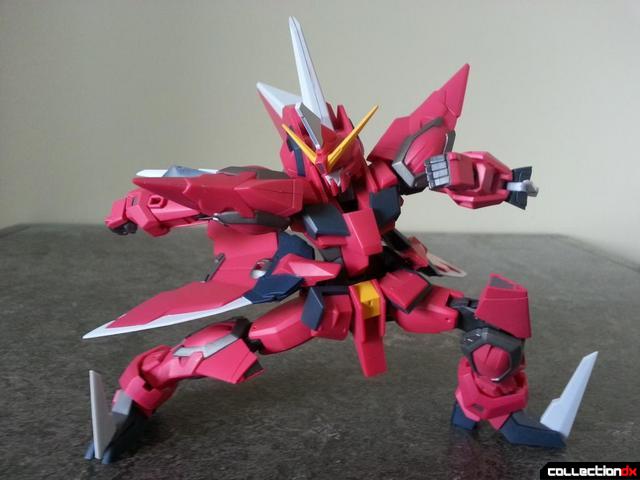 His torso can also move up and down which helps make a lot of nutty dynamic poses. 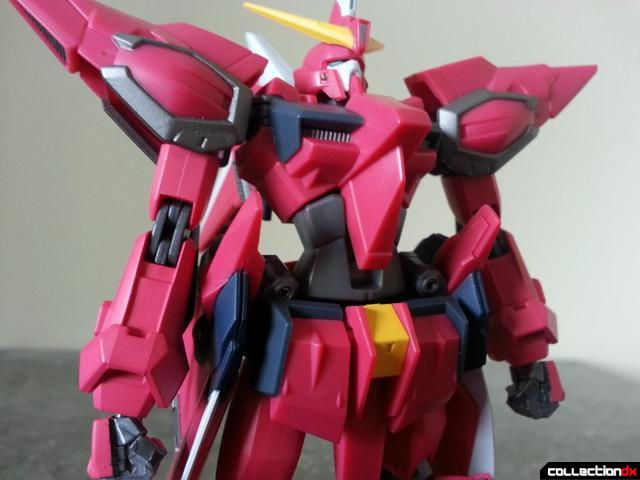 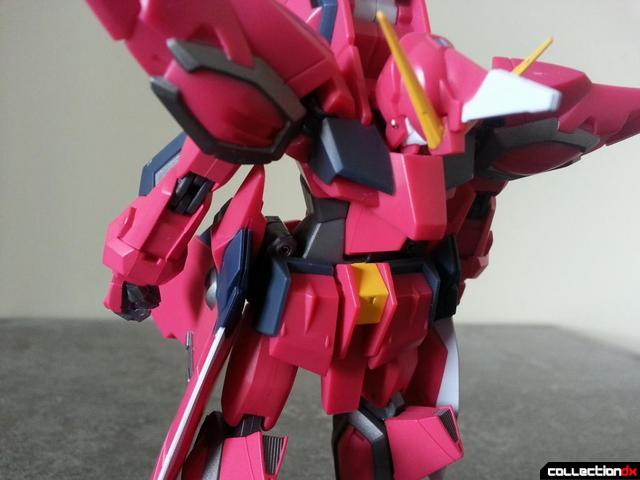 Aegis Gundam comes with all the accessories he needs including your standard sets of hands: fists, gun hands, open hands, and splayed hands. He also comes with his shield and beam rifle. You can actually store the beam rifle and shield on his giant side skirts. They peg in with ease. 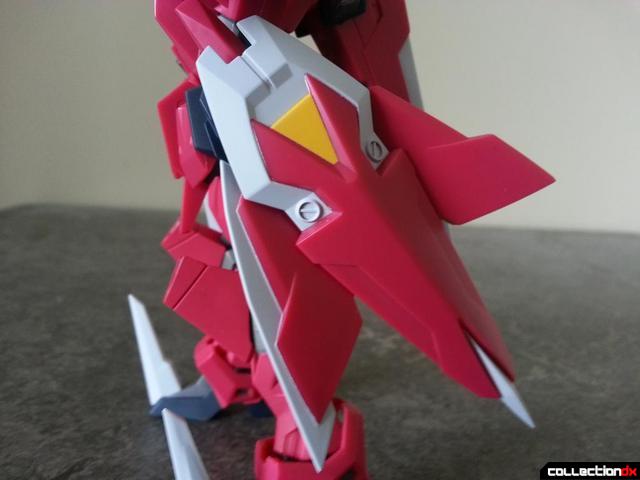 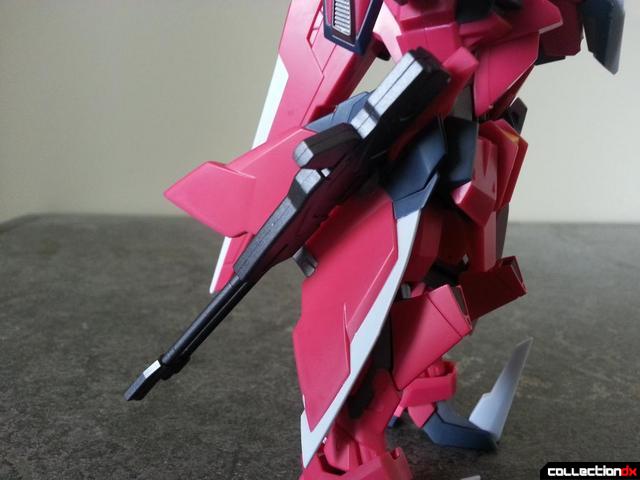 Although the beam rifle does look a little ridiculous as it sticks out a lot on Aegis Gundam's side. 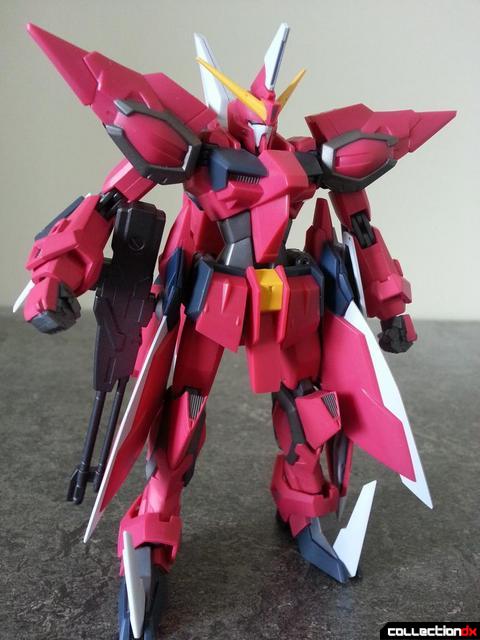 But the weapons look fine while equipped so it's alright. 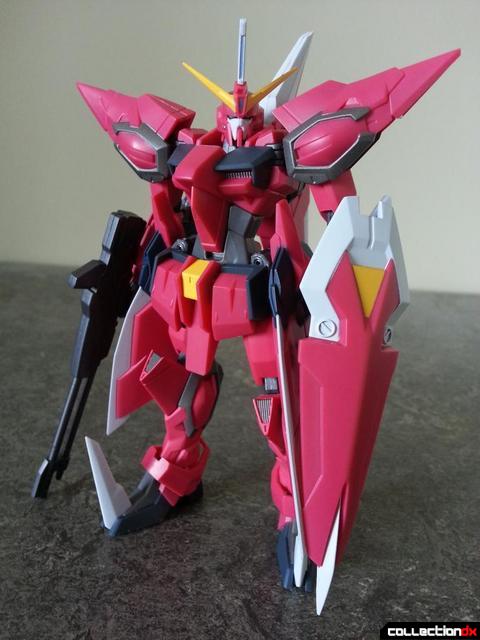 I do think the shield sits a little bit lower than I would like, but it does make it better for stabbing people in the head with. 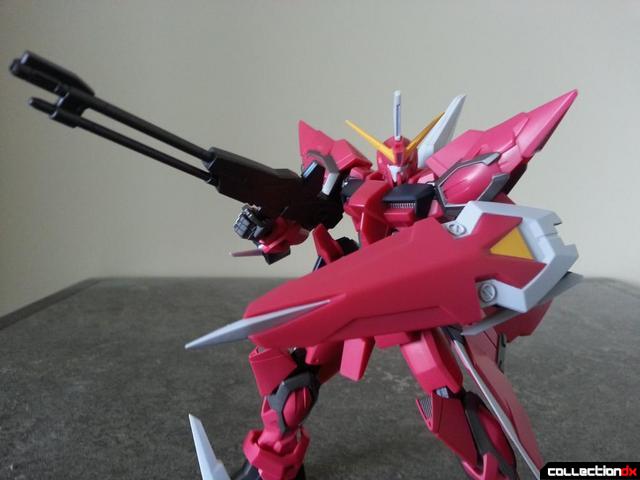 You can also have Aegis Gundam hold the shield using a handle. The only problem being that the handle is bigger than the open hand, and this makes putting the handle into the shield a terrifying and uncomfortable experience. Honestly I don't think it's worth the effort. 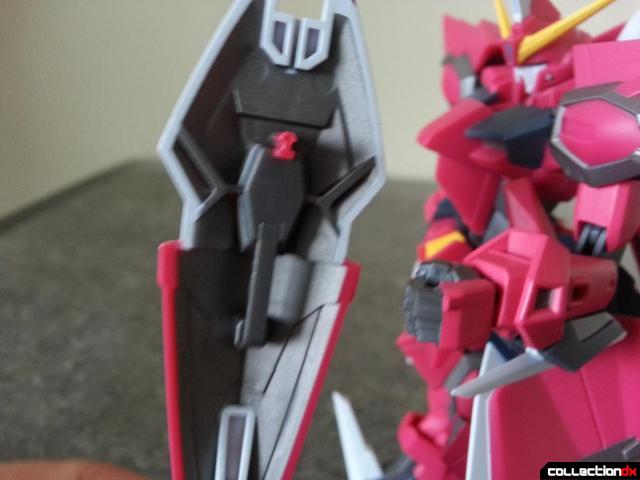 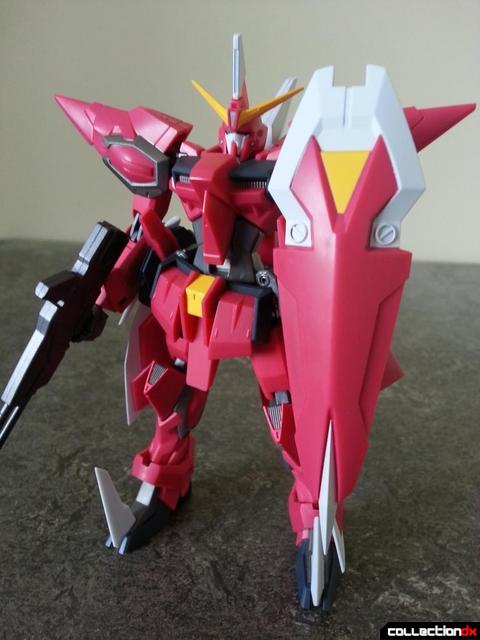 Aegis Gundam's last four accessories are four beam sabers which can be easily swapped out. Just pull out the white spiky bits on his forearm and replace it with the beam saber. 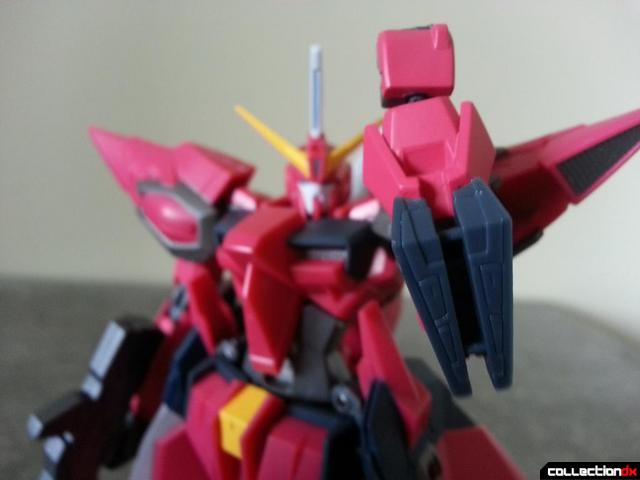 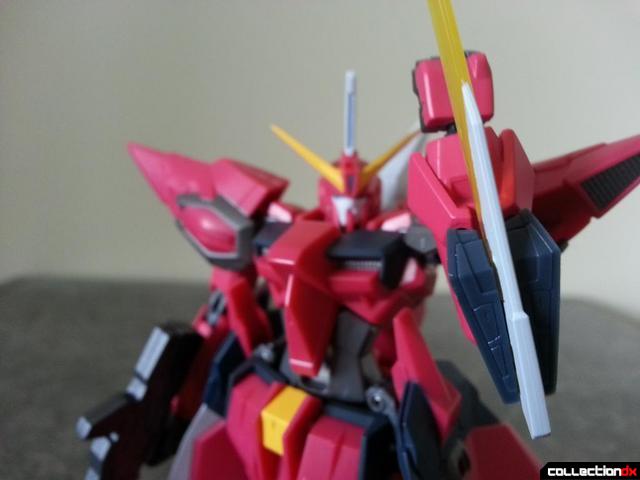 Aegis Gundam looks the most menacing with his beam sabers out and it is definitely the best way to display him. 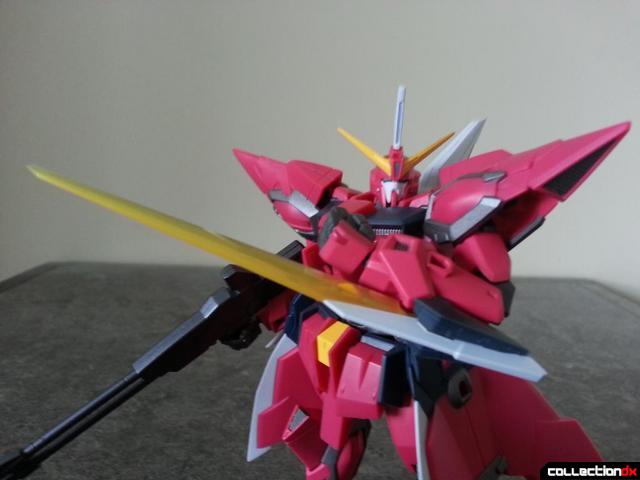 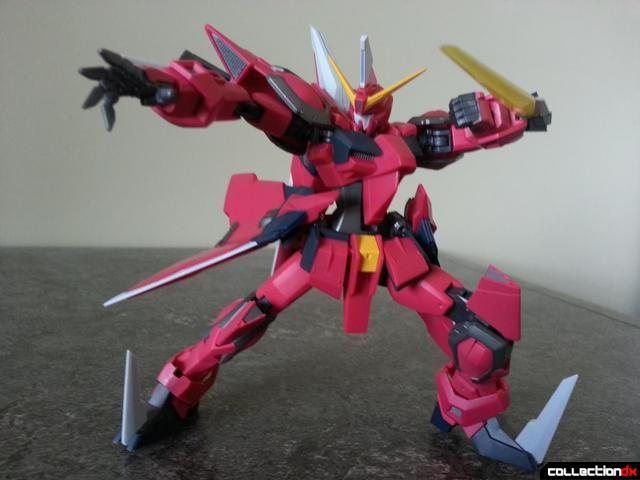 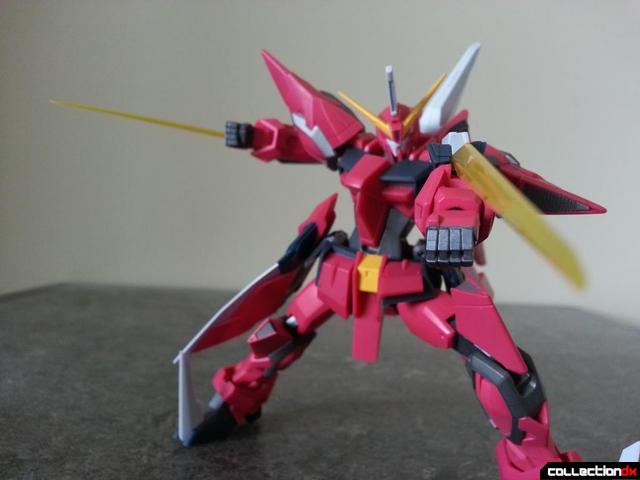 In case two beam sabers is too vanilla for you, you can also put beam sabers on his feet as well for some real damage. 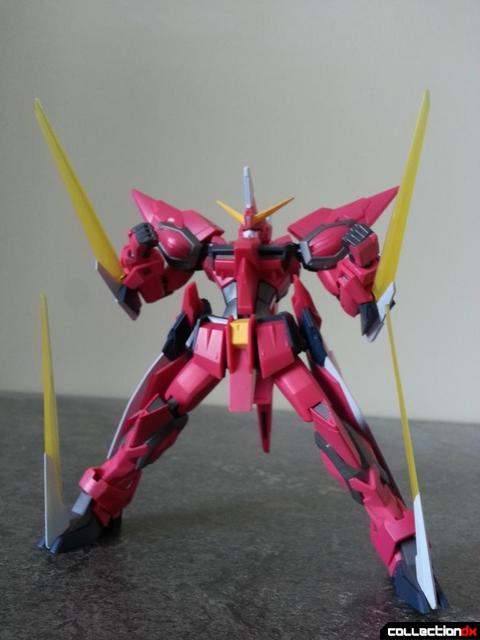 Aegis Gundam also comes with a Tamashii Stage stand. The only problem being the base piece is a ridiculous star burst piece that has no center of gravity. Although I appreciate Bandai's attempt to give these Gundam SEED figures a bonus, a regular stand would have been much better. 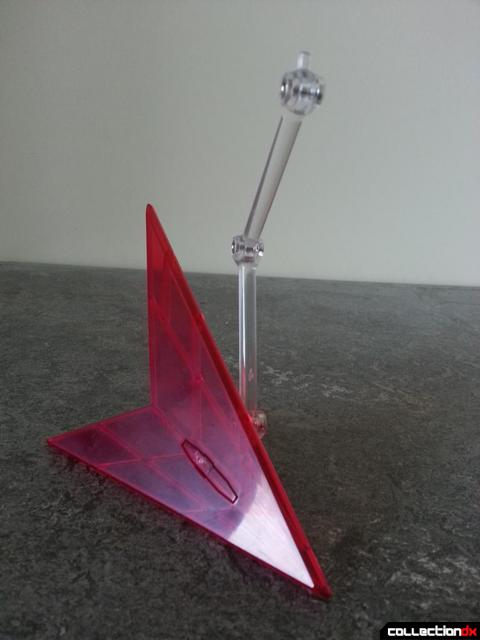 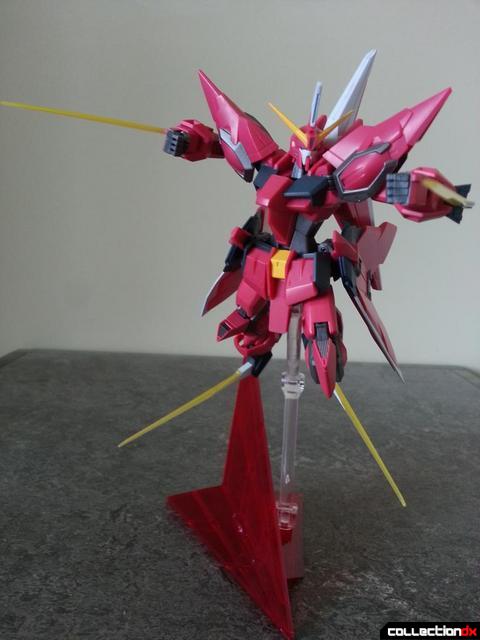 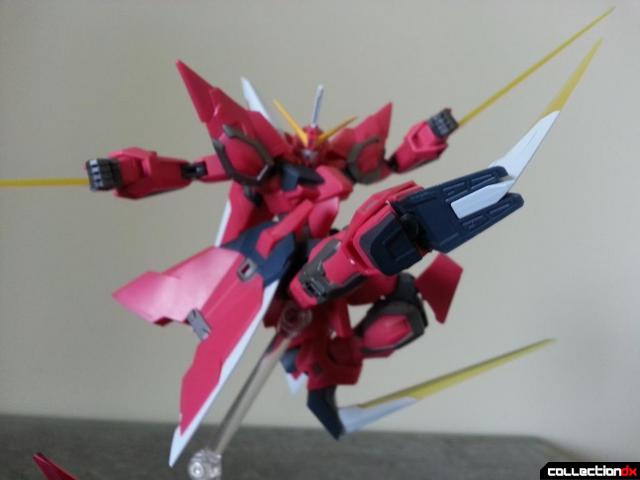 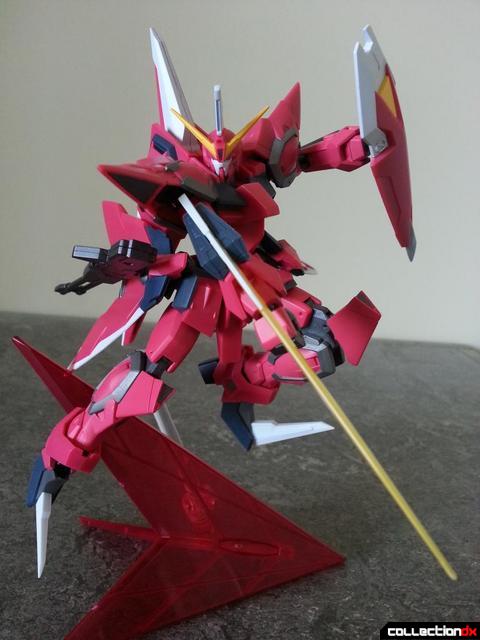 This brings me to the one feature that Aegis Gundam is missing and that he very so much needed. He is unable to transform into his mobile armor mode. Now I can completely understand why, as it is a very ambitious and unique transformation. I don't think you could have fit in the transformation, and the articulation, and the sculpted detail all together, so one of them had to go. It's a shame, but there are also other toys of the Aegis Gundam that can do that if you need that itch scratched.

Plus you can approximate it with a little effort. 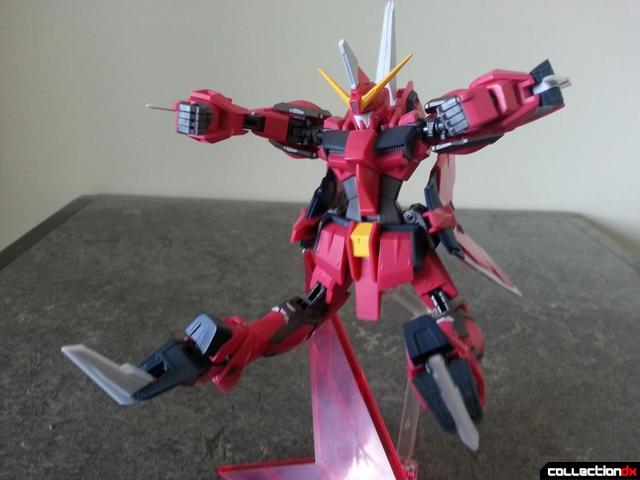 Regardless of that, the Aegis Gundam is a very impressive Robot Spirits figure. He is well sculpted, well armed, and most importantly, pink. If you like Gundam SEED or beam sabers, this guy is highly recommended.

its probably because i'm used to the gunpla but i do wish bandai gave the gundam in this line some panel lining..they look too bland to me(although it is show accurate)..but some detailing not gonna hurt..

seeing kyrios and arios from this line,its really a shame this thing couldn't transform..oh well..

Funnily enough, the transformation is what allowed older figures and kits to have good articulation, but I'll take that compromise just to have all four beam blades.