Repaints and retools have been part of Transformers since day one, and that fact has touched every iteration and line. None are excluded, including the Masterpiece. Considering how expensive and high-end MPs are (or at least are supposed to be), that's a good thing too. It maximizes value and quantity on both sides of the equation, consumer and manufacturer.

Even so, many were surprised when Hasbro announced Acid Storm as the latest addition to the series. He was originally going to be a TRU-Australia exclusive. But I guess enough interest and buzz was generated that Hasbro decided to also release him stateside via TRU. He was eventually released by Takara too as a USA-edition, but I picked mine up at Entertainment Earth's booth at SDCC 2013, where he first became available. 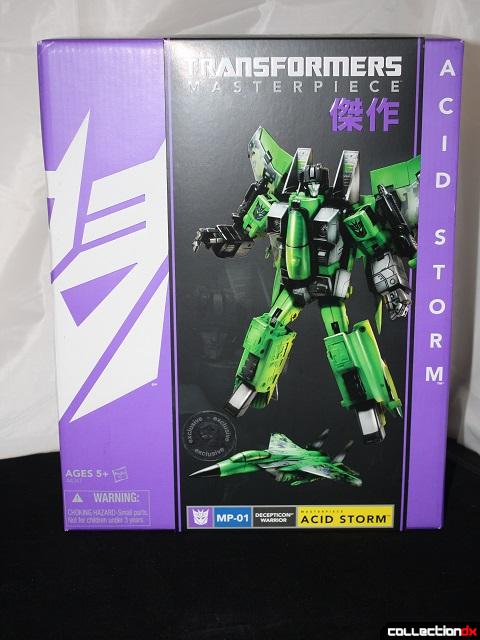 Maybe it's because it's very different from how Takara packs their MPs, but I really like the packaging style Hasbro has adopted for their MPs since the line was rebooted and TRU became the exclusive retailer. It's a firm cardboard and the character photos are on a sleeve. The front features the character's name and half of his faction's symbol. 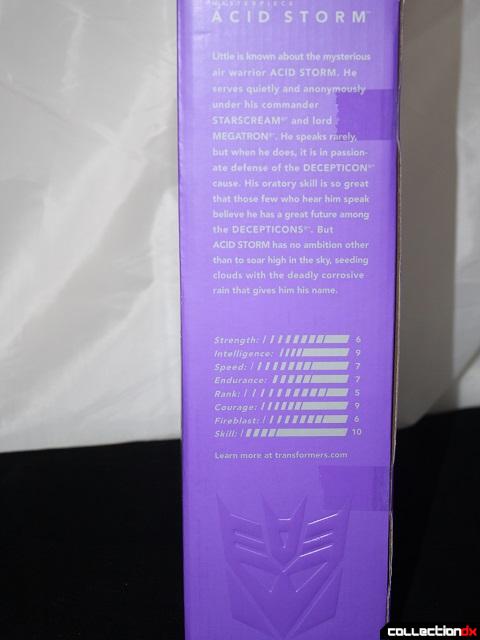 The right side has his bio and stats above an imprinted faction symbol. The bio is pretty interesting because Acid Storm had practically no identity to speak of before he got his first toy, a Universe-deluxe in 2008. He shares his origin with Sunstorm as one of the generic, nameless Seekers seen in the first season of the animated series. 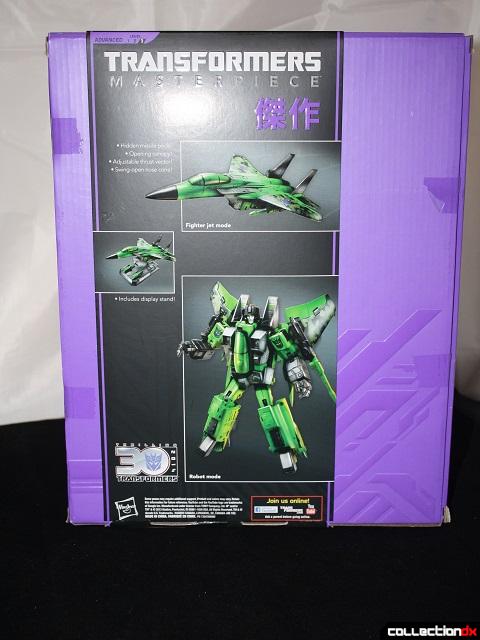 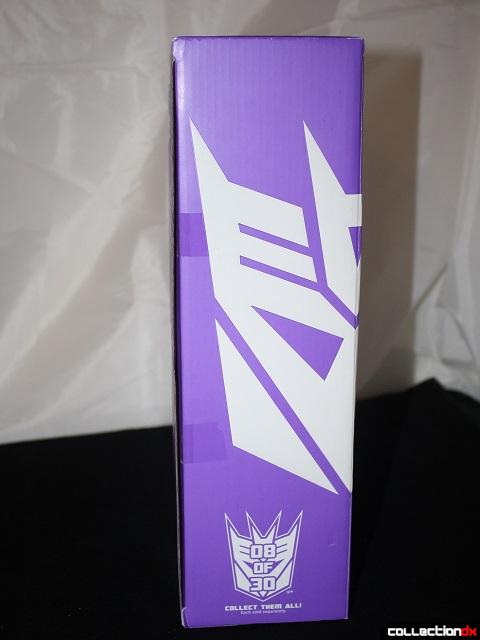 The back of the sleeve shows off more of what you're really buying, and the left side marks him "08 of 30" from Hasbro's Thrilling 30, a brand put on 30 "noteworthy" releases they were doing that year to celebrate the franchise's 30th anniversary. 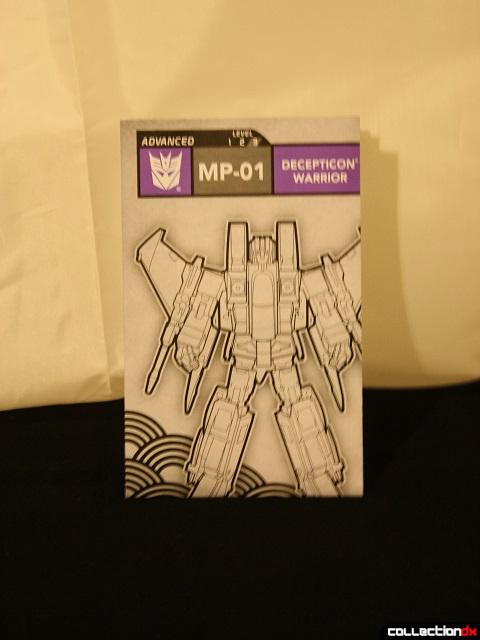 The only pack-in is the poorly thought-out instructions. They're missing some steps, don't really explain his gimmicks, and only tell you how to go from robot to alt-mode. Which is perfect since he comes out of the box in alt-mode. 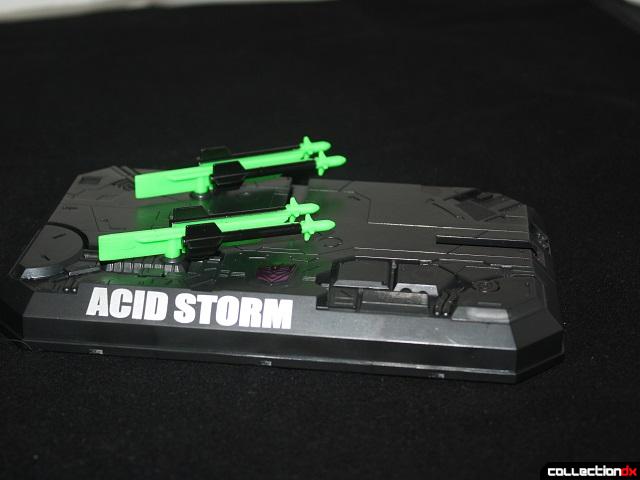 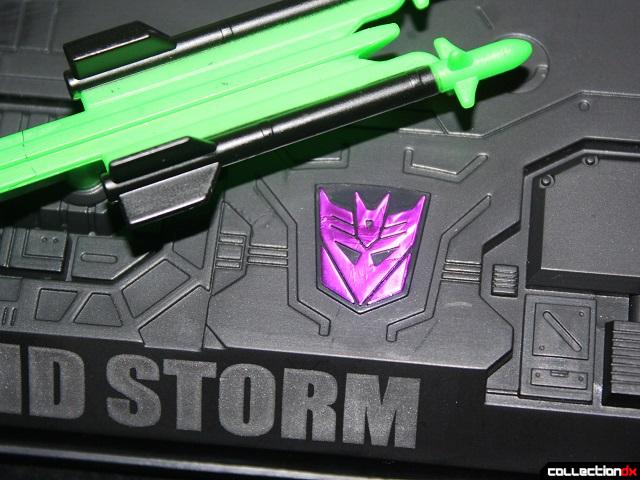 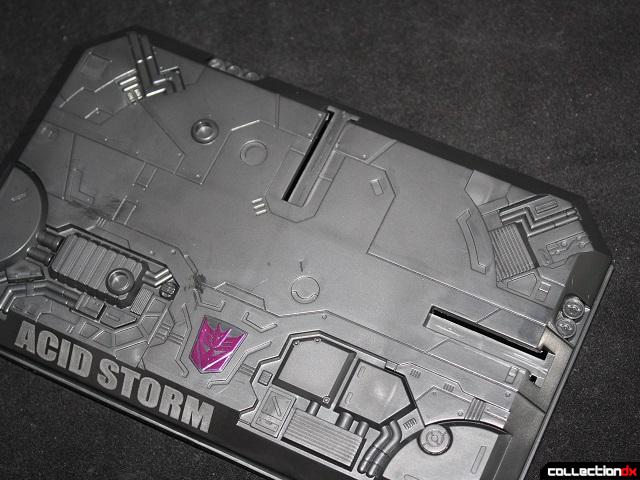 Different from his forebearer, MP-11 Starscream, but like most of the MP Seekers old and new, Acid Storm comes with a nice looking display stand. It's a very firm piece of plastic with lots of sculpted detail. His name is printed on one side and it has a couple of ports for his missile racks, but what I enjoy most is the metallic Decepticon symbol. Just gives it a fancy feel. 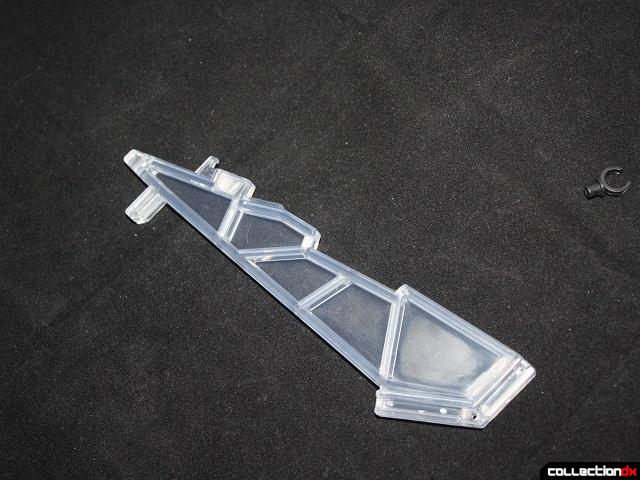 The piece used for mounting him is another story, but we'll get to that and the other piece in a moment. 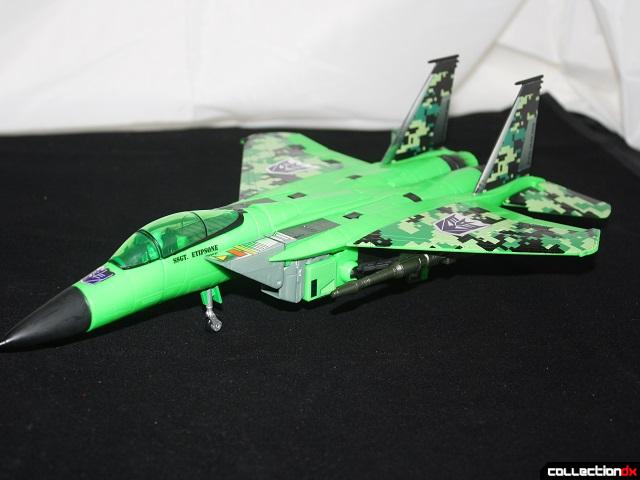 Like all the '84 Seekers, Acid Storm transforms into an F-15 Eagle, a staple of both Transformers and fighter jet lore. His green scheme is simple but a visual and primary breath of fresh air after years of looking at the same six Decepticons. Yes, Sunstorm sort of has the same thing going, but he's been around since 2003, so getting Acid Storm, especially as an MP, is pretty exciting.

His default deco is pretty uniform, but adding a reprolabels set made it just a little more so with symbols, matching tailfins, and more colorful air intakes. All the sculpting is there to make him pretty authentic. 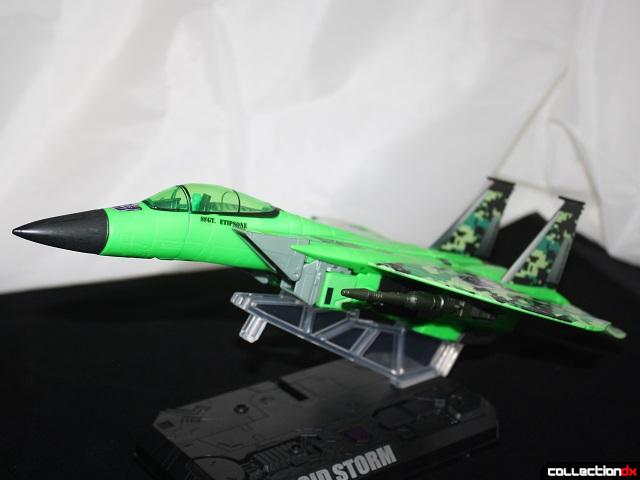 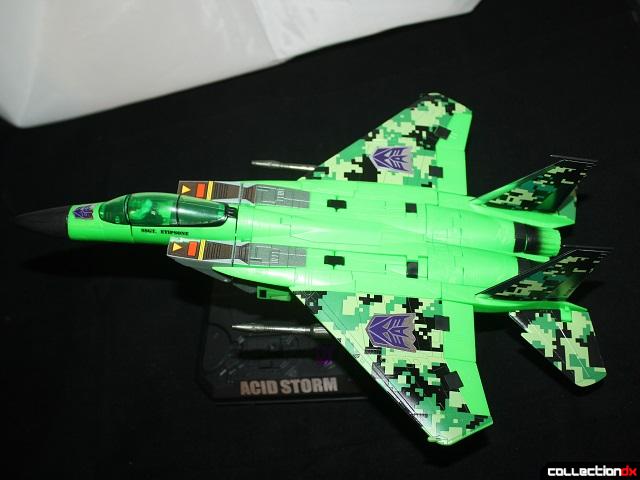 On the plus side, seeing Acid Storm mounted in the air provides great perspective. The optical camo pattern on his wings may seem strange, but it's a welcome change from the other Seekers. I don't know if he'd blend into any environment (jets can't really fly through forests), but at least he looks cool from all angles.

On the minus side, he doesn't really mount onto the stand that well. It's a great connection at the base, but there's only a small tab on the top that barely plugs into him. So it's a balancing act to get him stable. He'll survive footfalls and other such vibrations, but if you try to touch him, you'll probably make him tilt or slide off.

I don't remember if this was a problem with the first batch of MP Seekers, but I think it's a shared issue among the second. I wish the execution was better, but I appreciate what they tried to do, which is make a stand that's as unobtrusive as possible. In that, they succedeed. 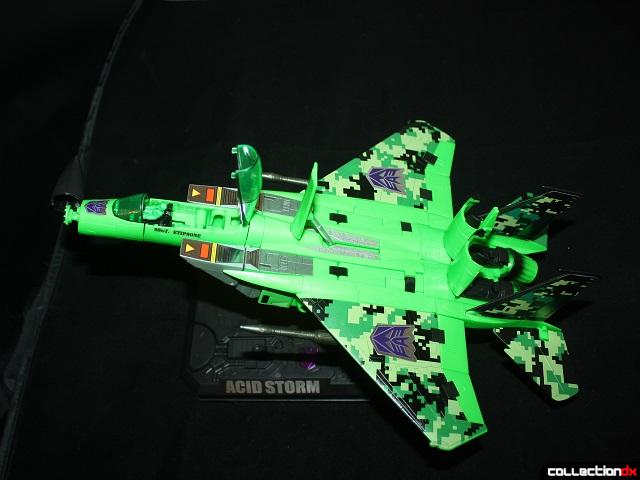 As a repaint, Acid Storm has all of the same gimmicks as the other MP Seekers, which were carried over from the first generation: opening canopy, pilot figurine (his is solid green), radar inside the nosecone, air brake, engine covers, adjustable thrusters, and retractable/rolling landing gear. 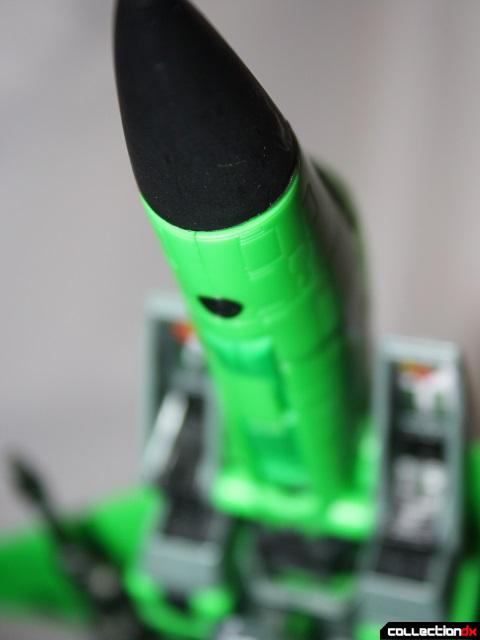 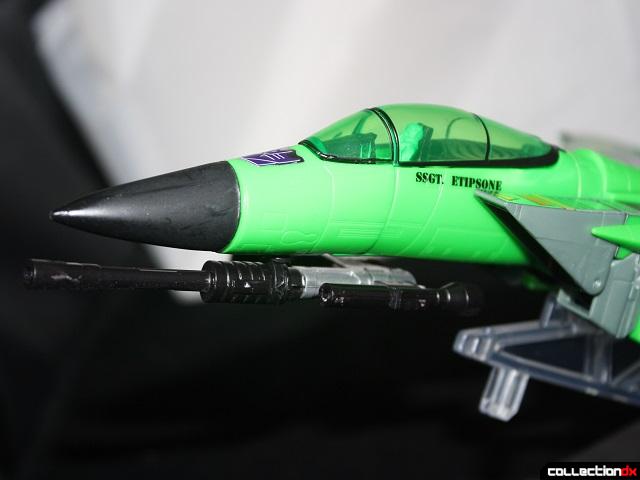 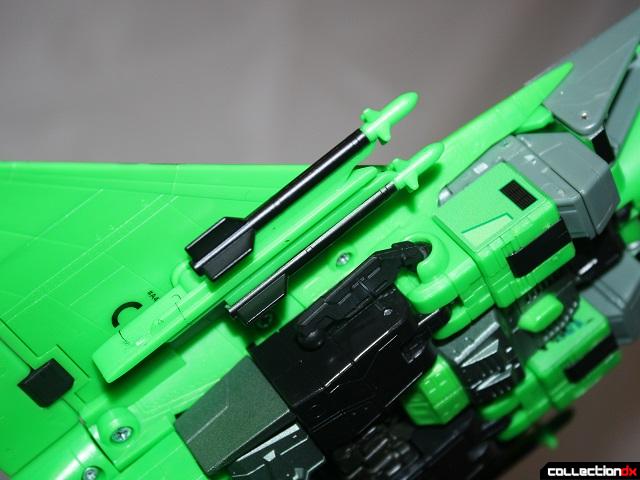 For weapons, it's the same things as above. He's got the arm cannons by default, a port under his nose for a clip to attach Megatron in gun mode (courtesy of MP-01/04), and missile racks that can be plugged under the wings in exchange for the cannons.

Overall, Acid Storm's alt-mode is really good stuff. The display stand and how he mounts on it could be better, but that shouldn't be held against the figure himself. 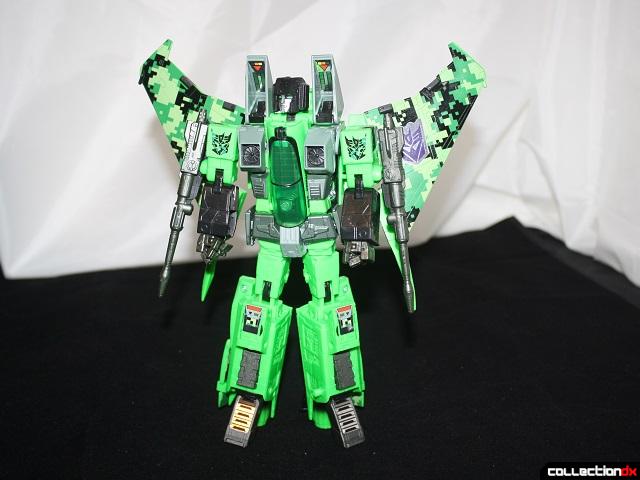 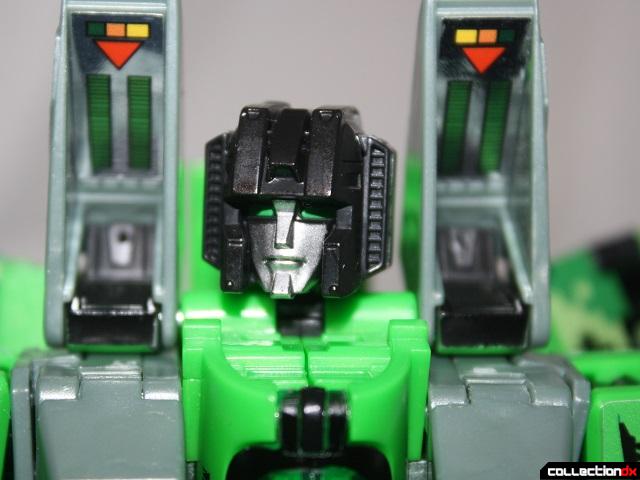 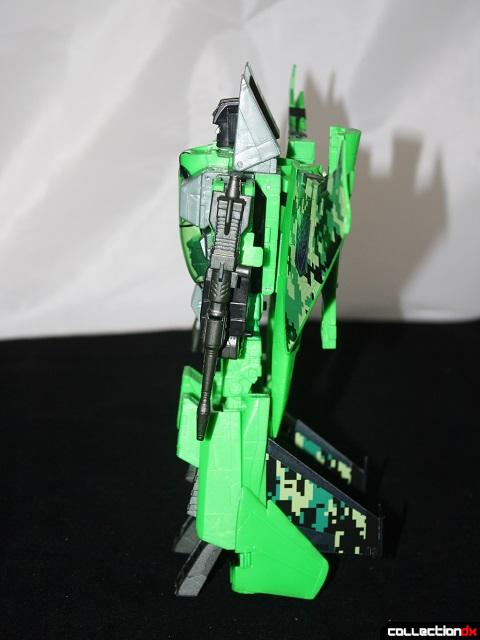 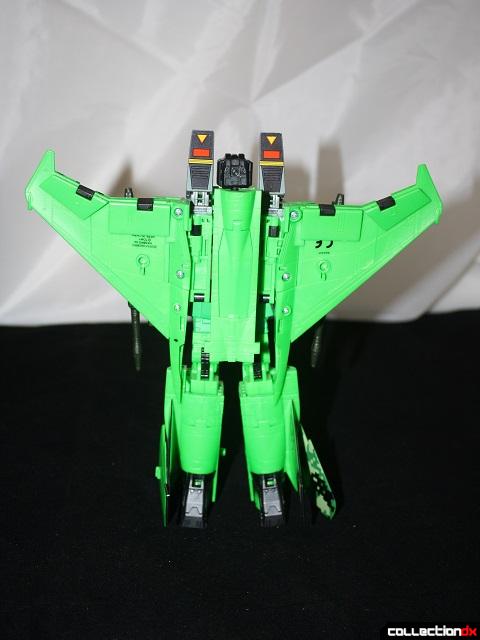 As much as I like him as a jet, I'll say Acid Storm looks as good in robot mode. Transformation is the same as the others, a modernized, more complete version of how the G1 toys did it, without the need to remove and reattach parts. Compared to the old MP Seekers, what they also changed is the tail fins and cannons. The horizontal fins now fold in toward the vertical fins, both on a piece that slides down toward the foot. And armatures have been added, which allow the cannons to be rotated into place rather having to be removed when going from one mode to the other. Also, they ditched the swappable faces for collapsing ears, which makes it easier to get the head through the chest cavity.

They say colors reflect moods, so I wonder what Acid Storm's deco says about it. Maybe he really does just sort of blend in like the bio says, a great soldier who aspires to be nothing more than what he already he is. I can imagine him having the voice of the Mad Hatter from Batman, only without the high accent.

The stickers here are just on his feet, knees, intakes, and shoulders. 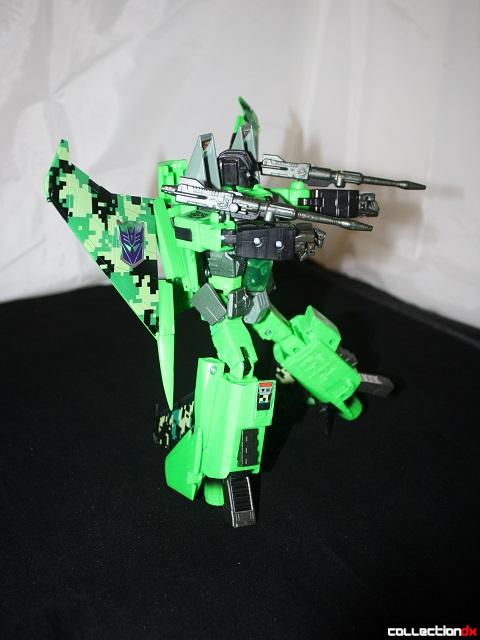 Articulation is the same as all the others: ratchet knees, thigh swivels, ratchet hips, ratchet shoulders, swivel biceps, hinge elbows, swivel wrists, and his head is on a ball joint. The newer MP Seekers are easier to stand and pose thanks to the addition of heel struts and chunkier forelegs. The wings can also be flexed outward, which helps prevent them from jamming up the legs. The hip skirts are stiff, but they're also compliant.

The hands are unique among MPs, with individual thumbs and index fingers. All three parts have top and middle knuckles. They can only hold the cannons solo if you use the armature, but they are very expressive, so I'll call it a fair trade. 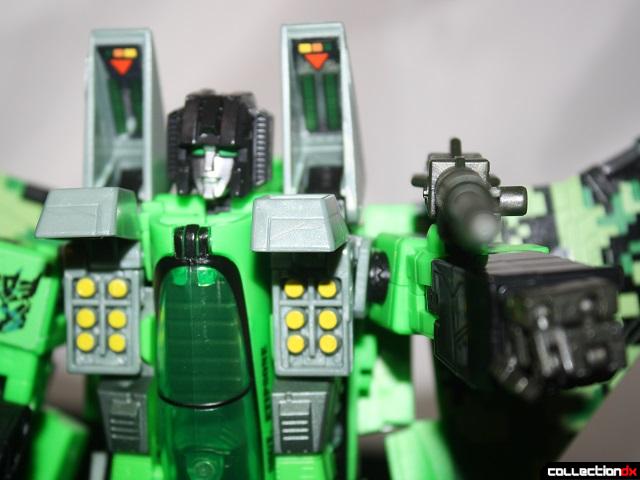 For weapons, it goes practically goes without saying that a Seeker will have his arm cannons, Acid Storm included. He can't hold his missile racks, but he doesn't really need to since he has some in his chest, painted yellow instead of the usual white. 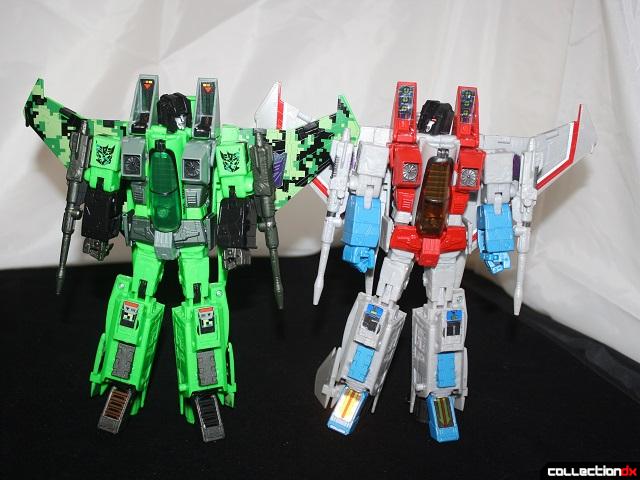 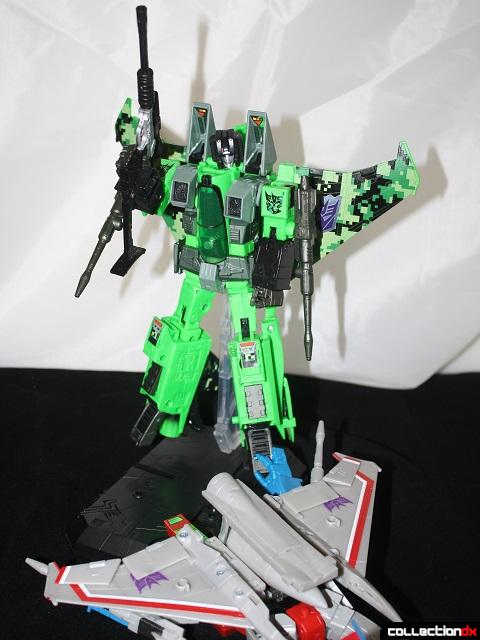 And for the more dynamic pose, Acid Storm can still use his display stand. Thankfully he mounts a lot easier in robot mode. He'd be just about perfect if it wasn't for the junction between his waist and upper body.

I was really hoping it was a problem unique to mine, but my MP11 Starscream has the same issue. It seems to be a common problem now and was with the old MP Seekers. Supposedly it's not with the coneheads, but we'll see. In the meantime, I may try clear nail polish to see if it helps.

Still, I can enjoy Acid Storm for the loyal soldier he is, probably prepared at a moment's notice to keep fools like Starscream in check. 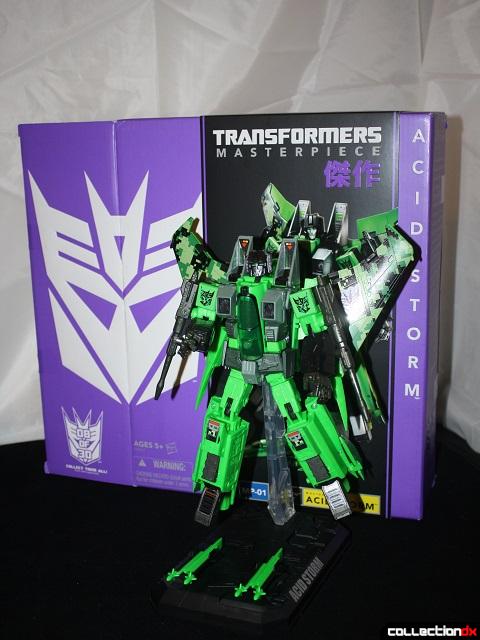 I really, really wish Acid Storm didn't have the problem with his waist connection. It's so aggravating to have that kind of issue with what's an otherwise wonderful toy. But even so, he's so enjoyable to me because of all his good qualities, and because he's so different from the other Seekers, so undefined and fresh. He probably has a special place in my heart too because I snagged him at SDCC.

If you want a nigh-perfect figure, you can skip him. But big Transformers/MP/Seeker fans will probably be happy to pick him up. I can't explain why (lack of character exposure? too much green?), but he's never really caught on like Sunstorm. He was $75 when he was released, and can now be found for as low as $85. The labels are $15, but he doesn't need them. If you're cheap or iffy, he's THE MP Seeker to start with, to only have the one or to help you decide if you want more.

2 comments posted
I think the main issue with

I think the main issue with the stand part is it was made for the MP-03 Seeker mold. The newer MP-11 rework while largely similar, has just enough of a difference that the old stand part does not fit its intended connection point in fighter jet alt mode. For whatever reason the Hasbro releases did not update the stand pieces when they updated the core figure. I am not sure if the Takara's versions have the same problem.

The Seeker molds really are a mixed blessing. They look great, but are so frustrating. Especially when compared to many of the other MP figures. Such as the Carbots.

That makes sense with the stand. They do look exactly the same. And yes, frustrating is the word. Especially compared to how good pretty much all of the other MPs have been since MP-11 dropped. I haven't done it yet, but if I ever see a 3P MP Seeker in person (TFcon Chicago?), I may just pick one up to see if it's a better alternative.