If it’s not crystal clear by now, I’m a huge fan of “Tiger & Bunny.” I’m also pretty partial to SH Figuarts. When two things I’m fond of come together, it’s a beautiful thing. 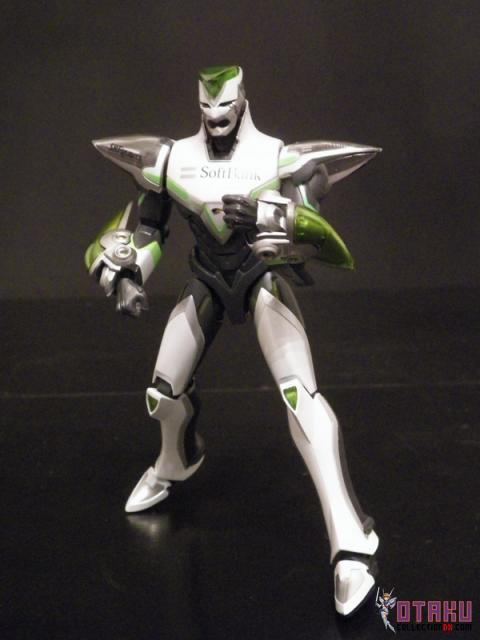 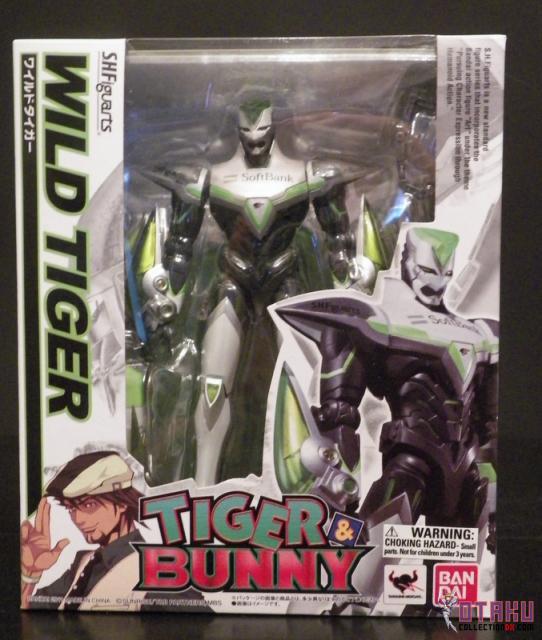 And here he is in the case. 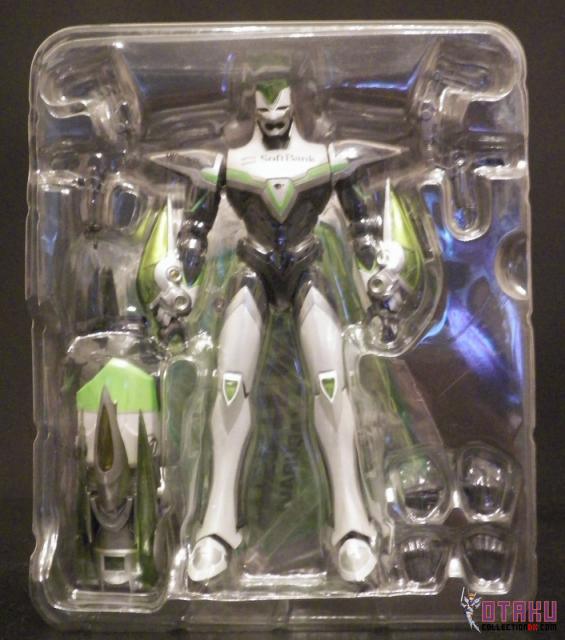 As you can see, Wild Tiger comes with a handful of accessories, including the overly large “Good Luck Mode” arm.

And here he is out of the box: 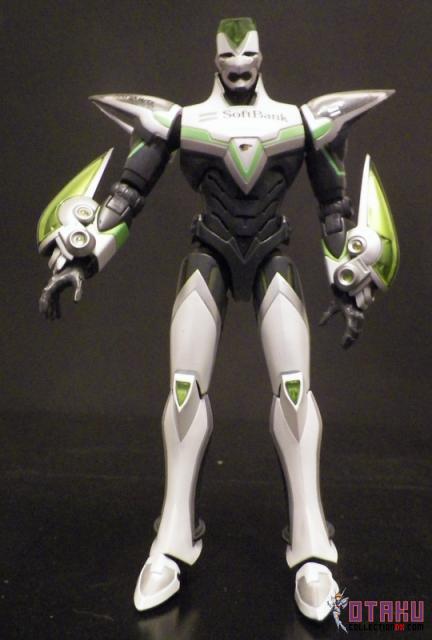 Like the other figures in this line, Tiger can stand on his own. He is highly accurate, from the Kabuki mask-like mouth to the corporate sponsors.

Now, from the side: 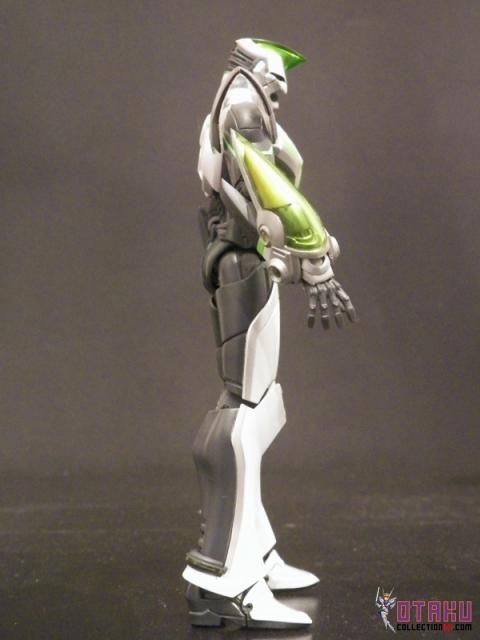 And a closer look at his boots, next to Bunny’s. They’re very girly looking, for a robotic superhero suit. 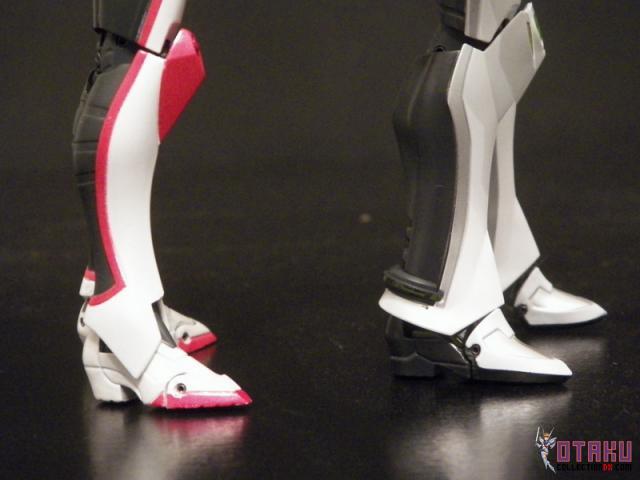 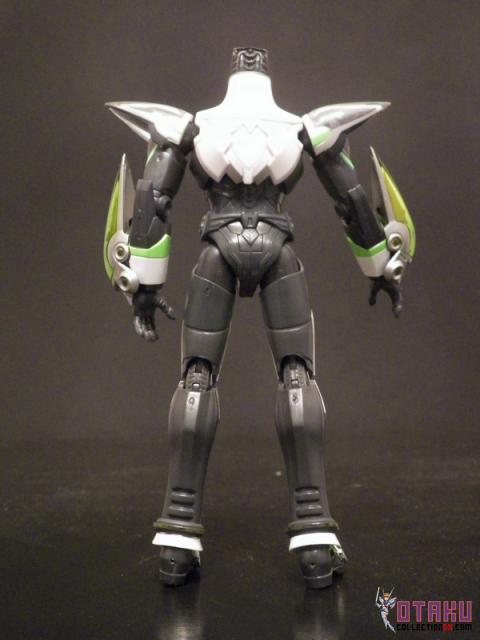 And now a closer look at the spine on Tiger’s back. 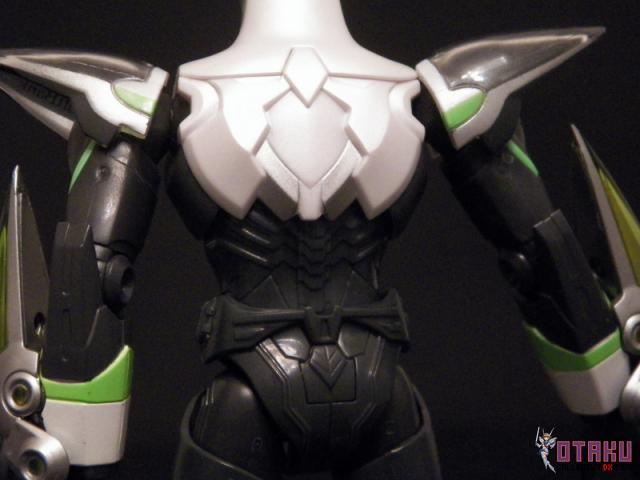 It’s a lot like Bunny’s spine, but that’s to be expected. The plating looks very cool. You can also see a bit of the opalescent sheen on the white part of Tiger’s armor.

What’s a hero without his corporate sponsors? Have a look at the SoftBank logo, with the little design underneath.

Of course, that’s not his only sponsor… 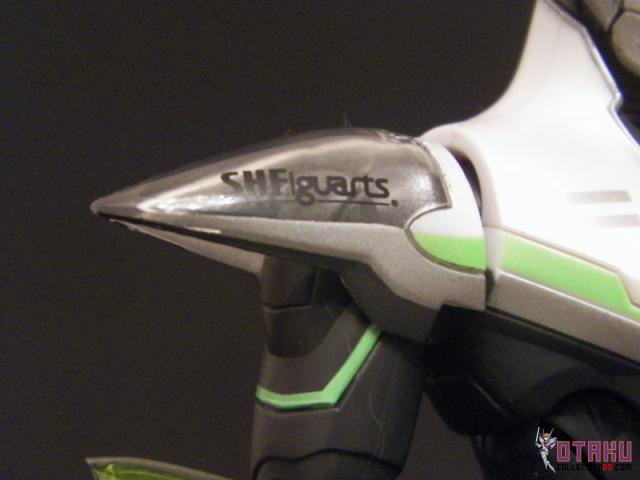 He does come with a stand, should you wish to use it. 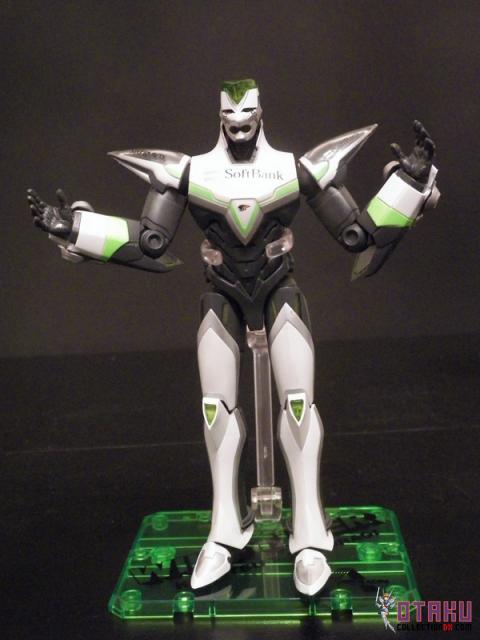 However, the stand doesn’t lend itself well to the more gravity-defying pose. This is a problem I encountered after playing with the “Good Luck Mode” arm. More on that later.

Tiger also comes with the two guns that shoot out lines for him to swing on, Batman style. The guns snap into place between the green teardrop-shaped arm plates and the arm itself, with the grip in Tiger’s hand. They’re pretty simply to pop on, whether you take the green arm plates off or not. 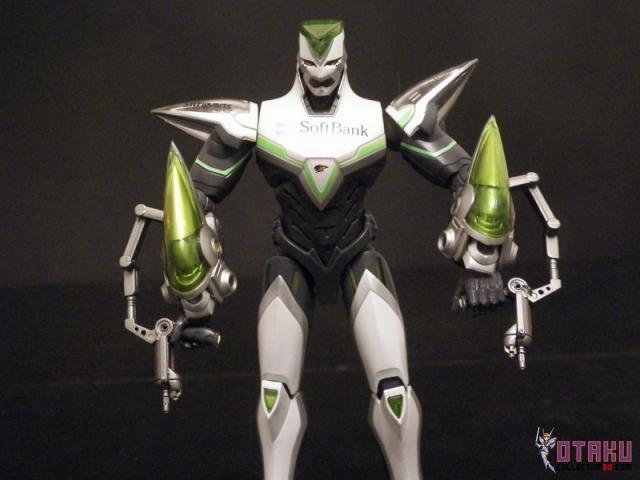 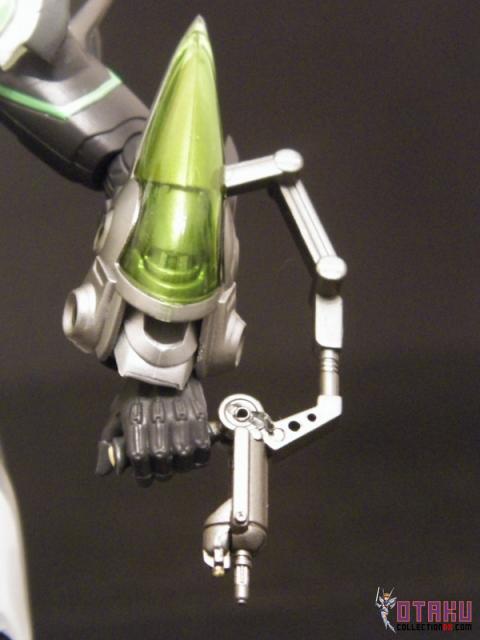 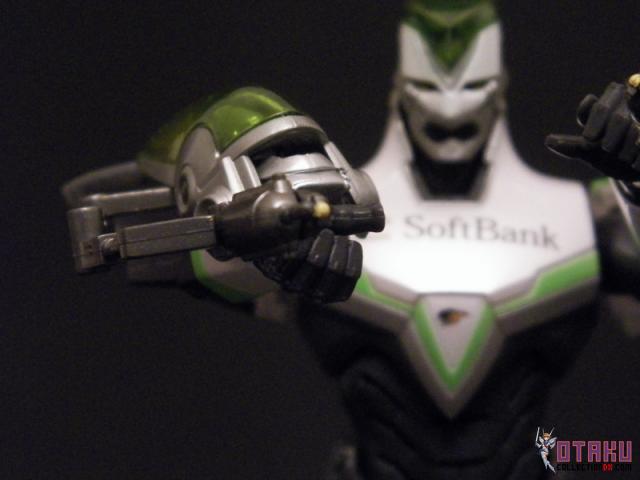 Here’s what he looks like with one arm plate off. 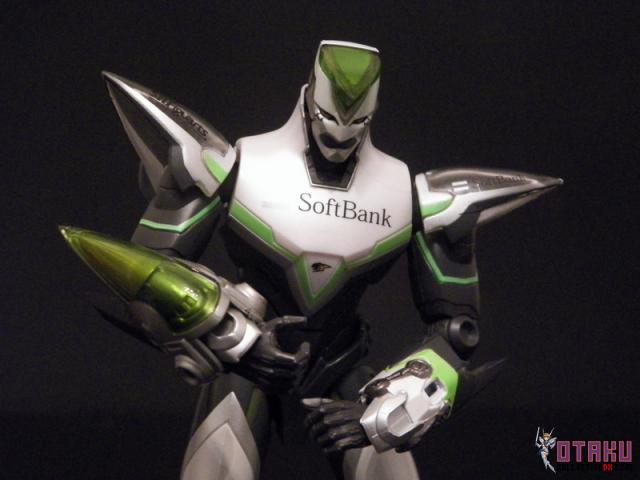 Of course the big accessory - literally and figuratively - is the “Good Luck Mode” arm. Bunny came with a large foot - it looked like it was coming right at your face. Tiger’s arm, however, is much less impressive. 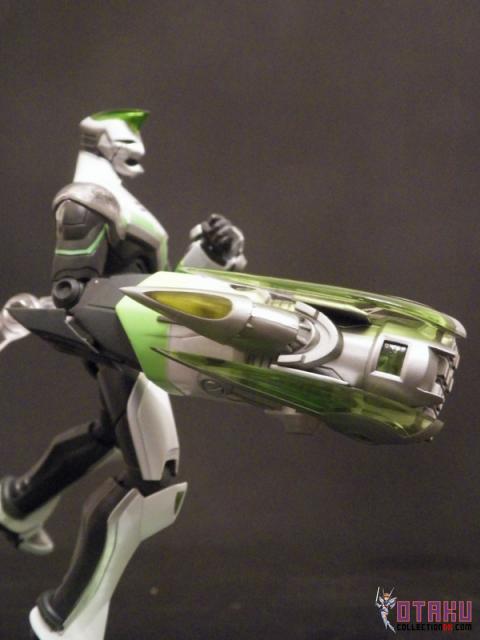 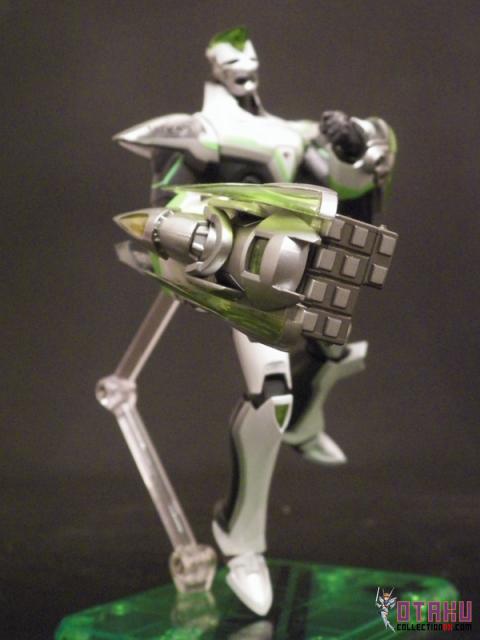 Of course, the real fun of these guys is in getting the gang together. 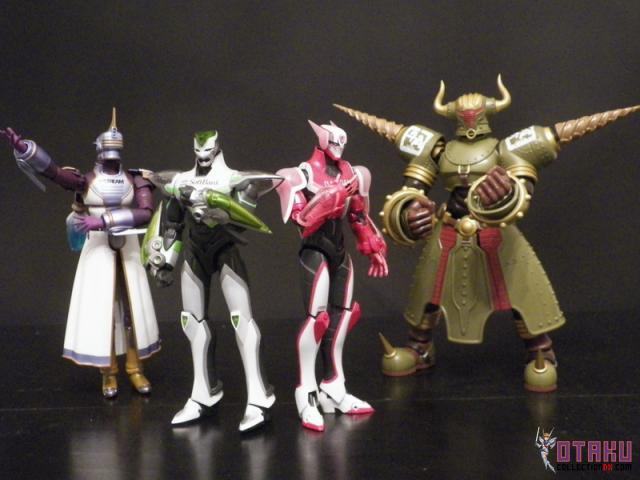 And in re-enacting scenes from the show. 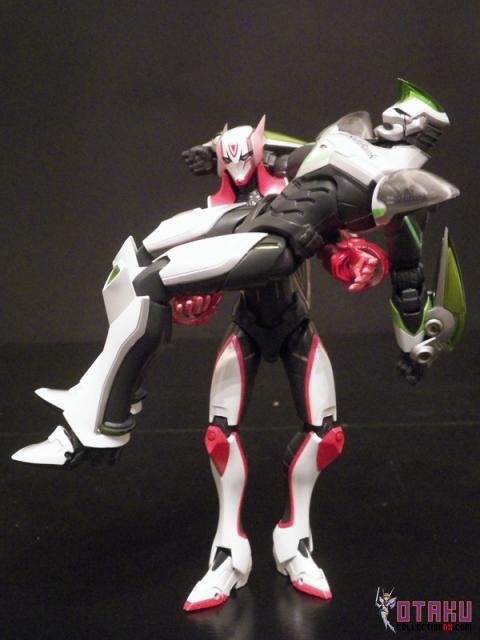 Tiger is my favorite character from the show, but sadly, Bunny has the better figure. They do look fantastic together, even though Tiger’s weird arm makes the perspective stuff rough for shots of the both of them.

Still, these are great figures. Switching out Tiger’s arm was a whole world easier than Bunny’s leg, though he had just as many pointy and potentially wound-giving parts as Bunny does.

All in all? Good figures. Well worth the price, and fun for anyone who loves the series as much as I do. 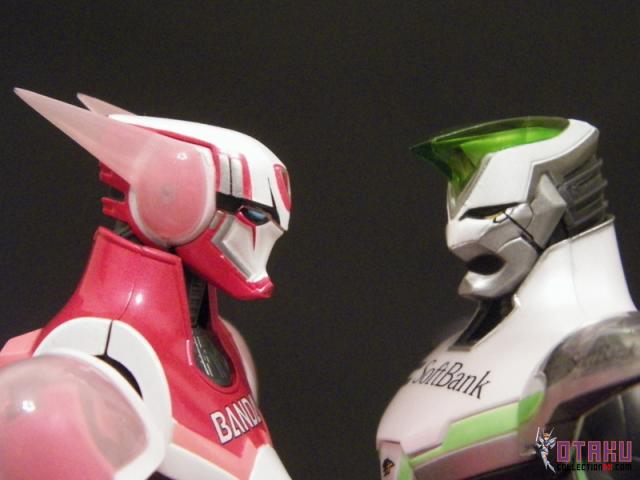