Nowadays, Macross fans have come to expect that nearly every Valkyrie will blaze through the stars while equipped with its own Super Packs. However, this was not always the case. When tandem productions Macross Plus and Macross 7 began, only the VF-11 sported the familiar enhancements. It wouldn't be until the last few of episodes of their respective series that the newest Variable Fighters would be shown fully loaded with super packs.

This lateness in development had a somewhat negative affect on the merchandise. At the time, the only way to dress up your VF-17 or VF-19 was to own the model kits and hunt down some pricey aftermarket upgrades. Also, while the DX Macross 7 VF-19 (but not VF-17) toys had molded holes seemingly designed to mount super packs, no super packs were ever released to go with them! Yamato had the benefit of hindsight, and planned for their 1/60 scale VF-17 to be capable of using a full range of accessories whether it shipped with them or not. And with the VF-17, Yamato fulfilled the promise of their toy's super pack compatibility. 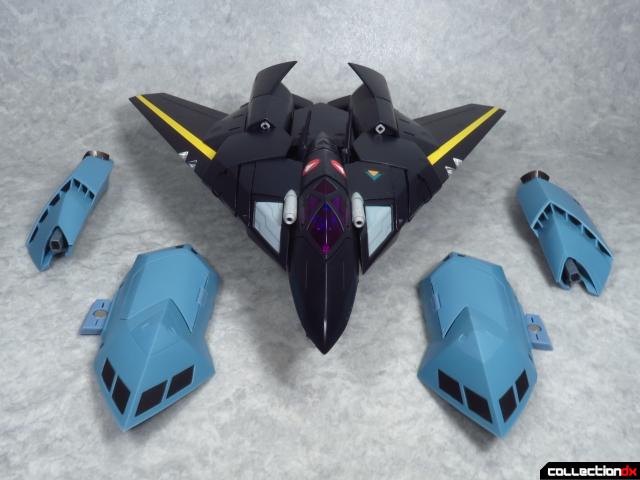 Yamato's VF-17 Super Packs consist of four parts in total, and they make for one of the more understated arrays of gear among Valkyries. Interestingly, the packs are not color matched to the VF-17, but rather are a blue-gray color more reminiscent of the VF-1's Super Packs in the TV series. Like the fighter itself, they have no tampographed markings. The set also does not include stickers, but the VF-17 has more than enough markings left over that this is not really an issue. 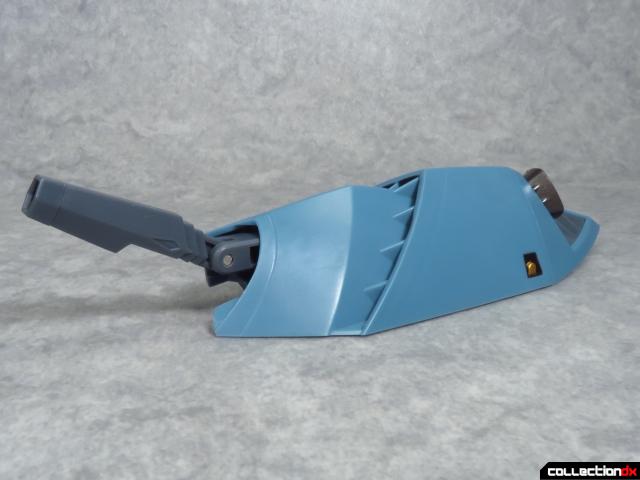 The backpack boosters are equipped with a slide-out beam cannon that can hinge up or down. 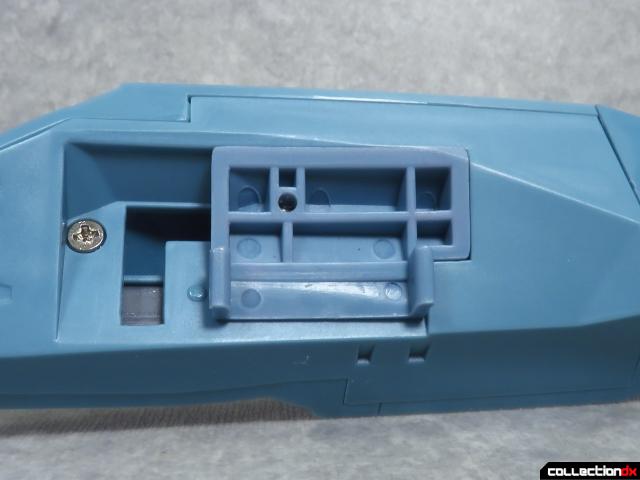 They also feature a sliding mount on an L-shaped track, which allows the boosters to assume the proper position for all three modes. 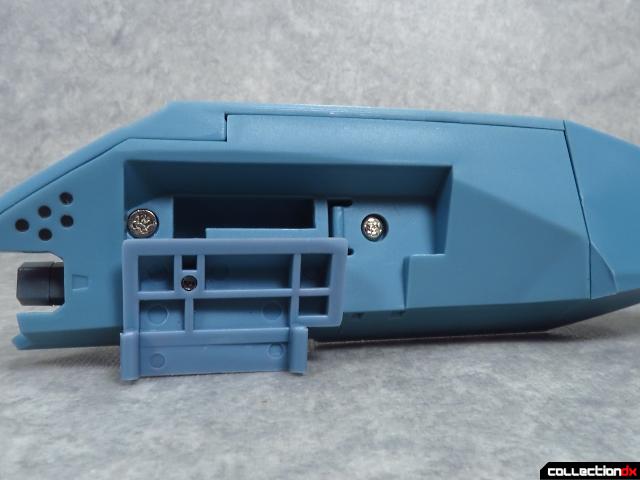 The mechanism is straightforward, and works quite well. Only Gerwalk mode uses the position pictured above, where the mount is at the lowest part of the "L." 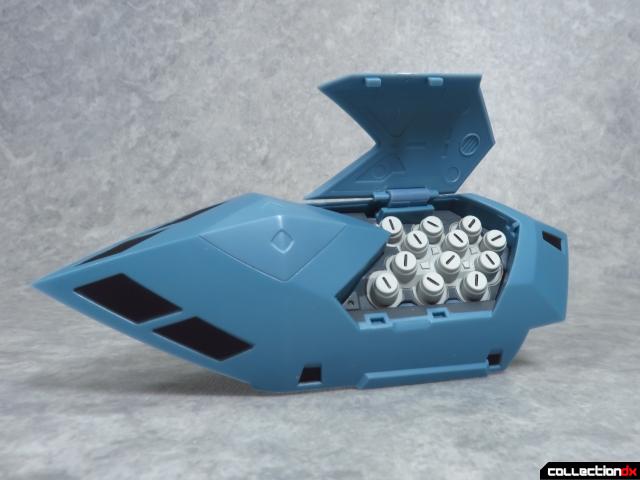 Below the waist, the VF-17 gains a pair of missile launchers on its leg packs. 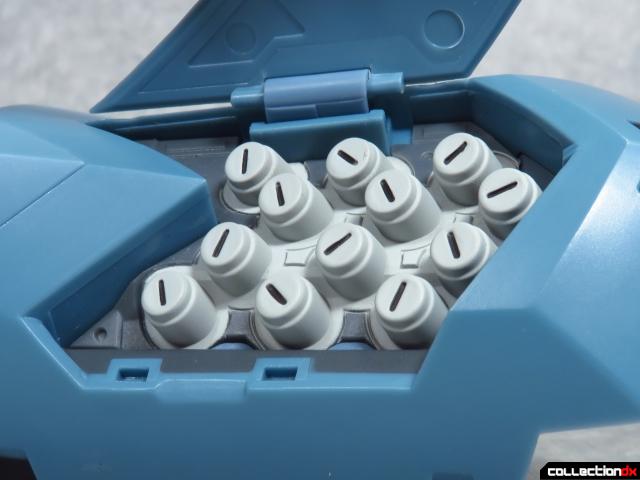 Inside a stealthy door is a bank of beer can missiles. While there isn't a lot of reference material for how these should be colored, Yamato went with a very plain all-white paint scheme. 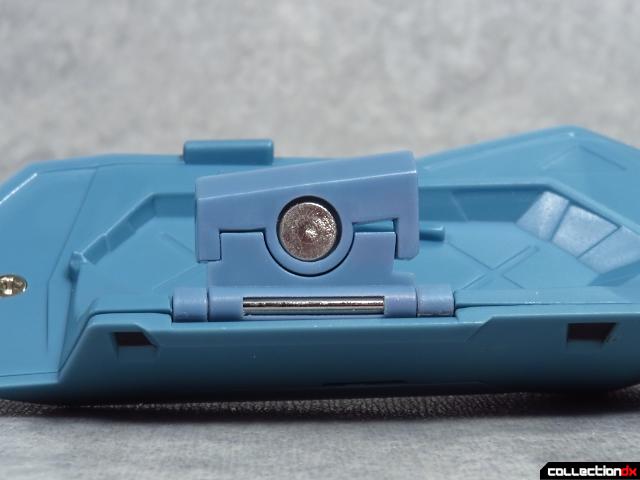 The leg packs affix themselves to the Valkyrie via this large hinged tab. 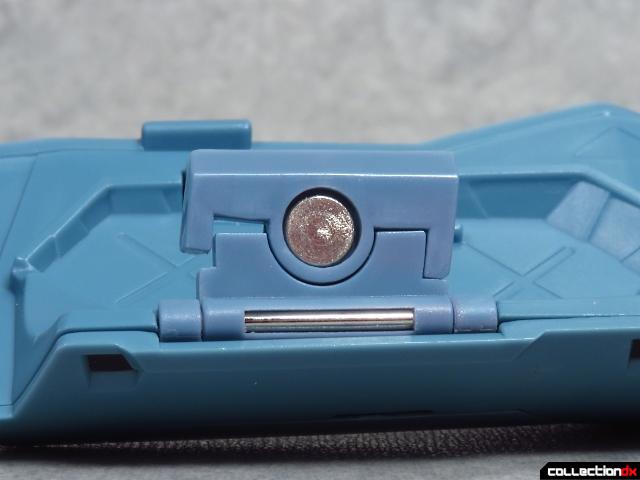 Note that the end of the tab can tilt a little for better fit in either fighter or Gerwalk/Battroid mode. 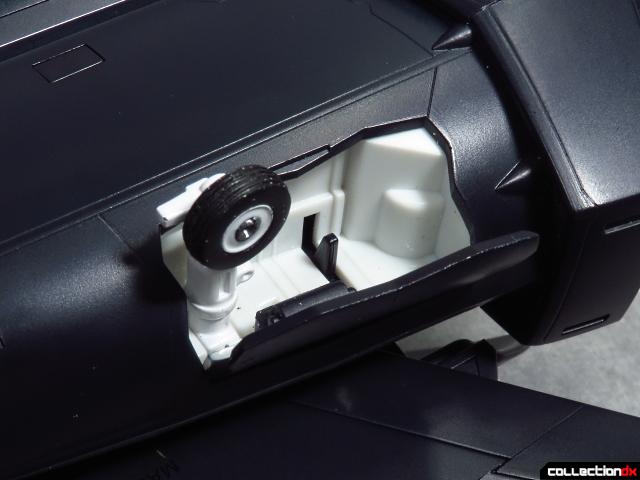 Prepping the Valkyrie to receive its super packs is pretty simple. Inside of each main wheel bay is a small lever. Sliding the lever towards the body of the aircraft opens up a small slot on the legs where the pack will attach. 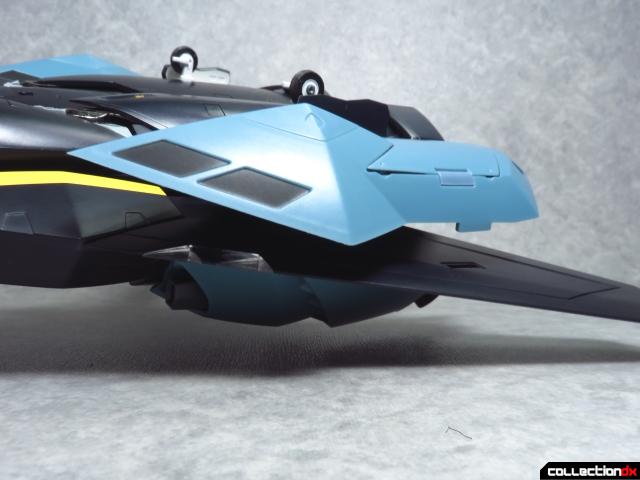 The leg packs slide into the opened hole in the leg, while another tab goes into a slot under the wing. 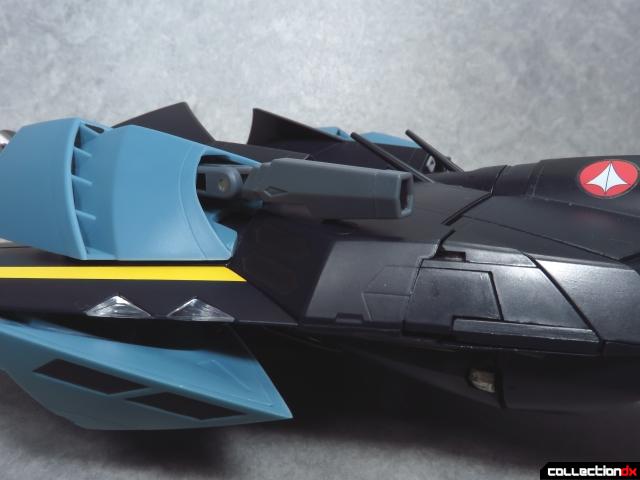 The sliding mount on the backpack boosters is pushed forward to the bottom of the "L" without moving it further downward. Essentially, the bottom edge of the pack should align with the wing stripes. The slide-out beam cannon can also be deployed in all three modes. 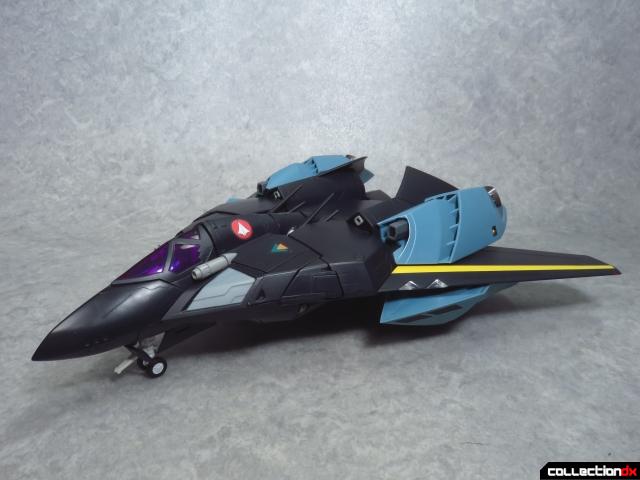 With the Super Pack attached in fighter mode, the VF-17 gains a little extra bulk in a way that would go unnoticed if the gear was colored black like the aircraft. 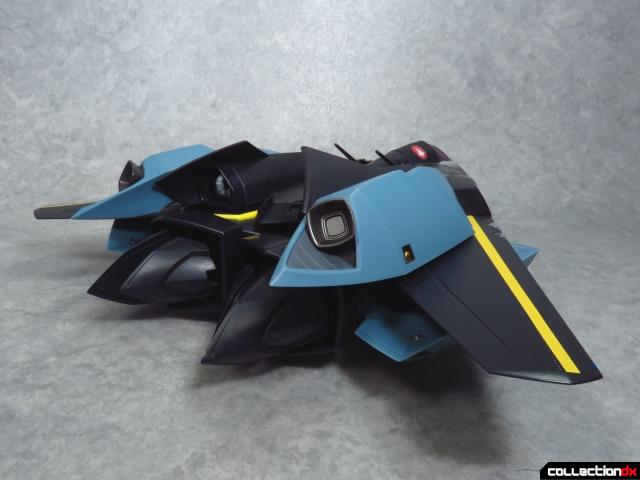 I wouldn't say these parts are badly designed, just that only the most hardcore Macross fans would demand their presence. 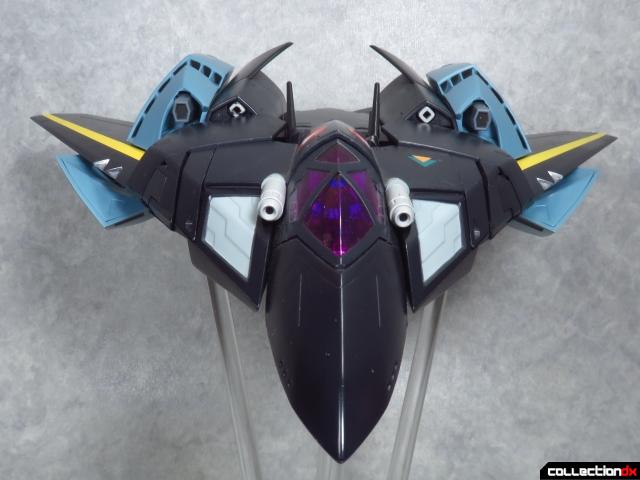 Though the baby blue coloring provides an interesting contrast to the stealthy black machine. 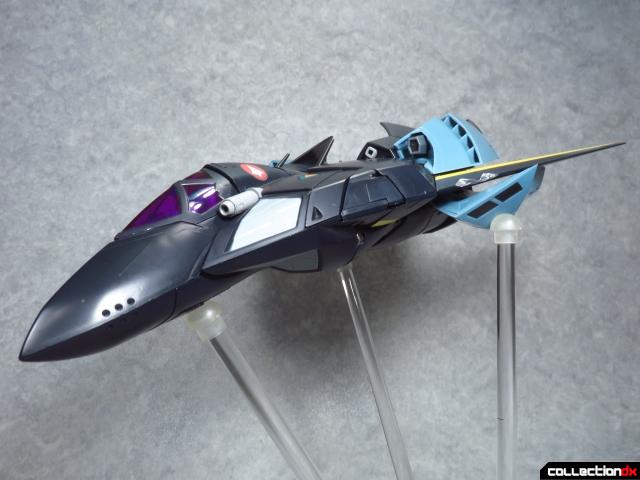 Sadly, the leg packs end up looking a little gappy in fighter mode, due to how they had to be worked around the VF-17's peculiar transformation. 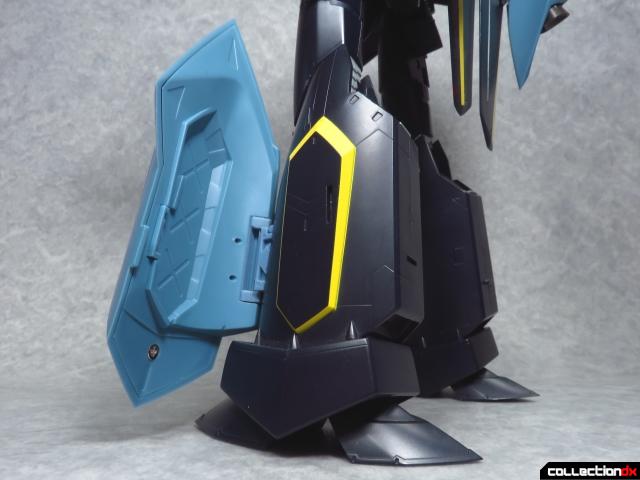 When the VF-17 transforms into Gerwalk or Battroid mode, its Super Packs fold up against the sides of its legs. Admittedly, it took me a while to master this simple procedure, as you have to work a tab on the pack into a small slot on the leg by just feeling it out. 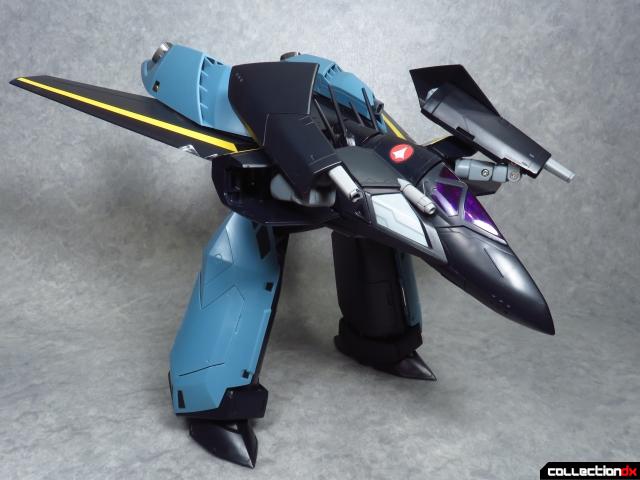 Gerwalk mode is where things get a little iffy. While the toy is certainly designed to mount the super packs, its backpack strut can get loose and will sag down with the added weight. In the VF-17's normal Gerwalk mode, the sides of the backpack slide inward to allow the Valkyrie's arms enough clearance to bend backwards. 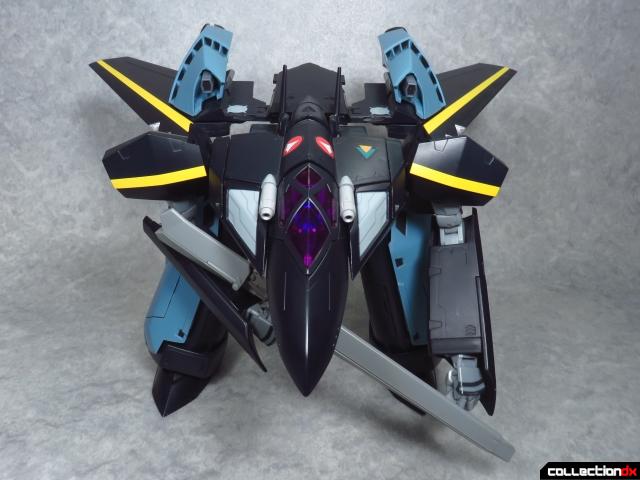 In the VF-17's traditional Gerwalk mode, the sides are left in their outermost fighter mode position. In general, this Valkyrie's super packs add just a few extra steps during transformation, and can be easily left on during the process. 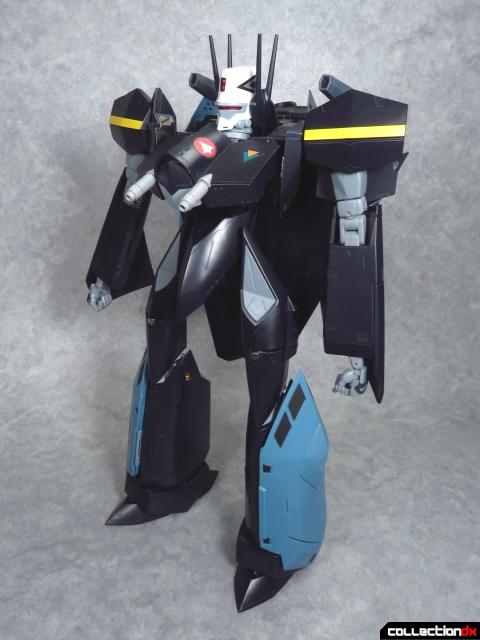 Battroid mode is where things start to pick up again, as the fully-equipped figure has no problems staying together in this form. Note that while the commander's S-type is the only VF-17 with super pack line art, it was never seen in Battroid mode in the series. Rather, Gamlin would switch back to his blue striped D-type while using packs in robot mode. 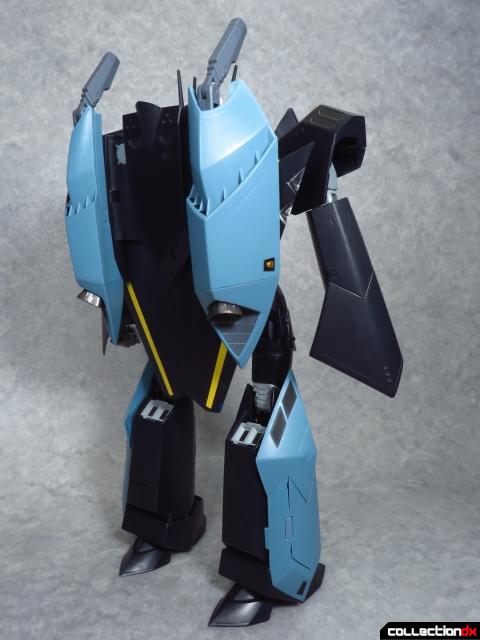 My only real gripe with the design of Yamato's super packs is that they sit a bit too low on the back. In the show, the shoulder cannon mounts were much higher than the head lasers, and that let the backpack remain visible from the front. Here, they barely clear the shoulders and lose some of their visual punch. Although, given the late addition of Super Packs to the VF-17 design, it seems there were some inconsistencies that hindered making them into a functional accessory. 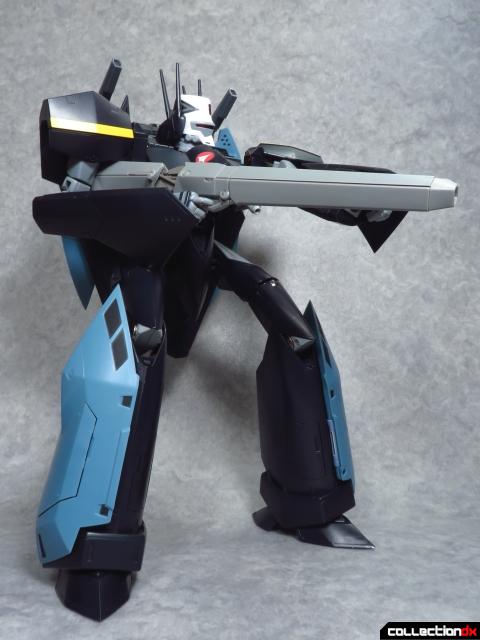 All that being said, Yamato's VF-17 still wears its super packs quite well in Battroid mode. 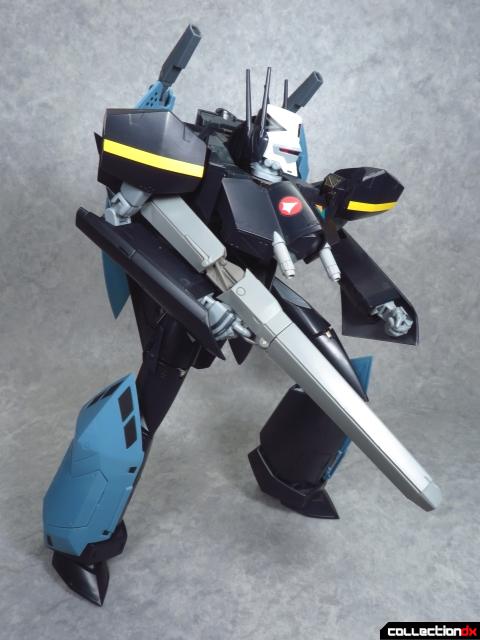 They offer no impediment to posing. 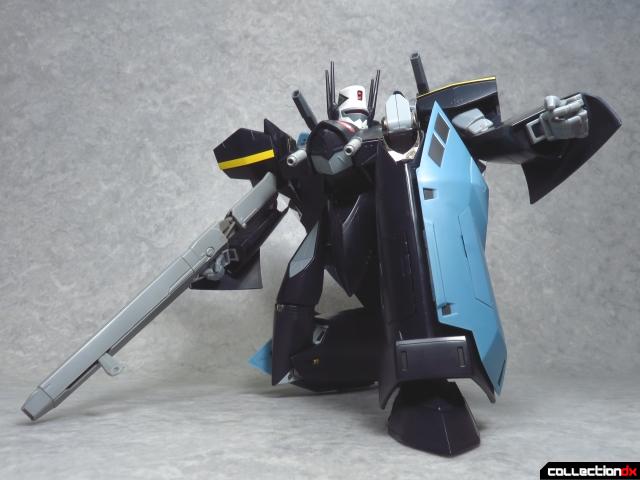 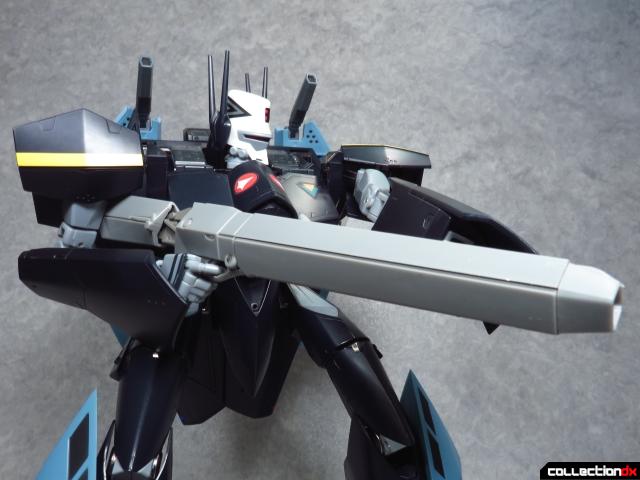 The VF-17 is called a "Heavy Battroid" for a reason. 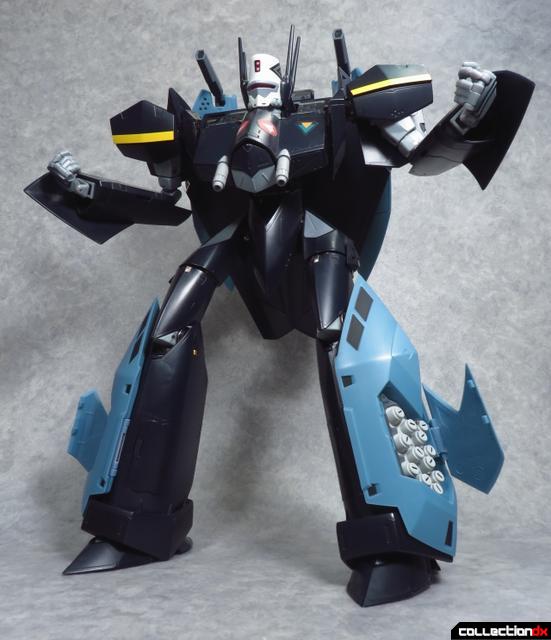 And the super packs definitely up the heaviness. 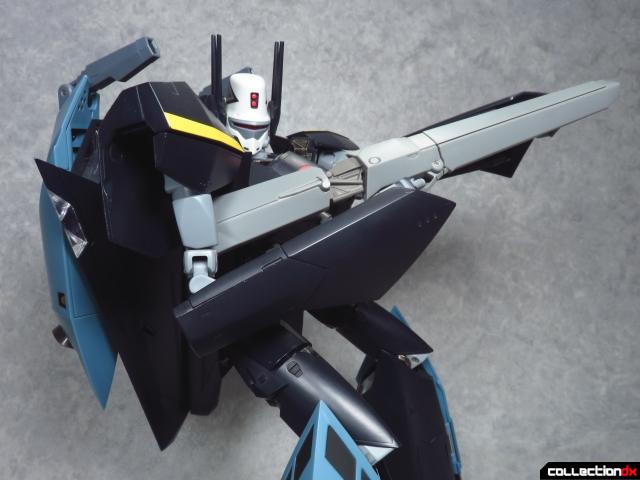 A good toy is made a bit better with this accessory pack. 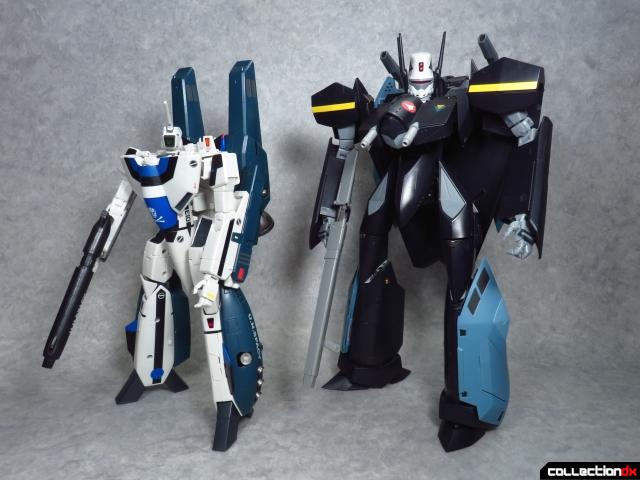 Here is the VF-17 all dressed-up next to its ancestor, the VF-1. 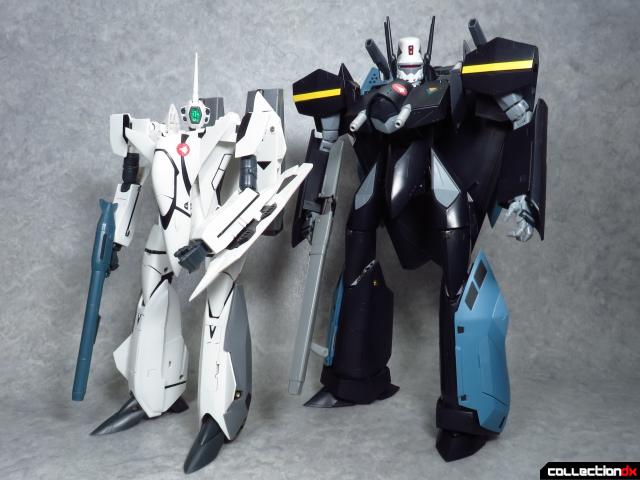 Of the new Valkyries introduced in the Plus / 7 era, the VF-11 was the only machine to have super packs from the get-go. Here is the Diamond Force leader along with another of the Macross 7 fleet's brave (and hapless) defenders. 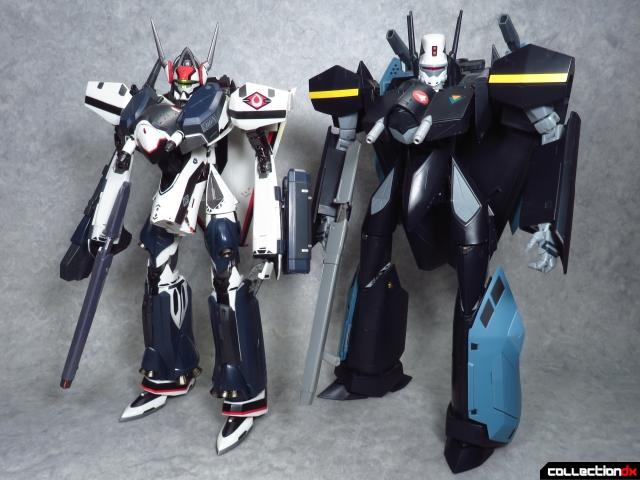 The VF-17's descendant, the VF-171, would also acquire its full range of equipment towards the end of its respective series. In comparing the two, Yamato was able to create a very functional set of accessories based on a simpler design, while Bandai's attempt was more complex and troublesome to handle (much like the main toy itself). 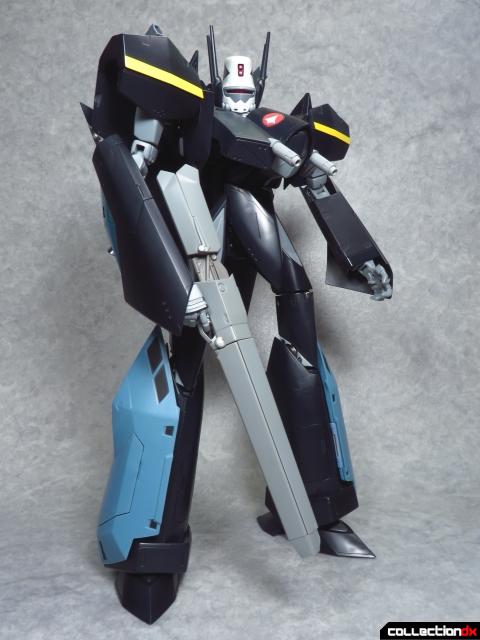 If it seems like I took a while to get around to reviewing these, it is because, even as a big Macross 7 fan, the VF-17's Super Packs just don't feel substantial on their own. I feel like most people waited for the release of the VF-17D that came bundled with the packs, rather than buy them separately. As a result, the standalone set has stuck around long after Yamato themselves underwent their transition into Arcadia. Also, there is a bit of sticker shock when you realize you just paid around the cost of a Robot Damashii figure for four relatively simple accessories. Much like with the VF-171's Armored Parts set, this is only geared towards big time Macross fans who need their Valkyries to be as complete as possible.