In an unusual move, Hasbro decided to tool TWO separate versions of the initial wave of Transformers Prime toys. One was set for the Asian market, the other for the US market.

The toys for the Asian market were labeled First Edition and were “accidentally” released to US retail, causing scalpers to descent on Toys R Us like nobody’s business. The line was quickly pulled, and First Edition toys price shot up into the stratosphere.

The regular release of the toys then arrived and many fans were underwhelmed about the simplistic toys. The finishes were worse, the transformations less intricate, and they just seemed… cheaper?

So what does this say about Hasbro’s brand strategy? From a consumer standpoint, it says that US consumers are too poor and too dumb to afford proper Transformers. It says that Hasbro sees the dollar signs of the emerging Chinese market and is trying to cash in, at the expense of its domestic fans. Maybe those aren’t the facts, but it’s how I see it. It’s unfortunate, but I guess they've gotta go where the money is. There’s a reason why the Transformers Ride is opening in Singapore first.

To their credit, someone listened to the fans outcry as Toys R Us brought over the First Edition toys as well as some other Asia Market exclusives during the 2012 holiday season. Let me tell you, it was strange to see Transformers with Asian packaging at TRU.

This release of Vehicon is from that wave. This First Edition release is a completely different mold from the regular Prime release.

This is a great Transformer. I love the look and feel of the whole thing – it’s got a sort of Batmobile vibe going on that looks totally badass. 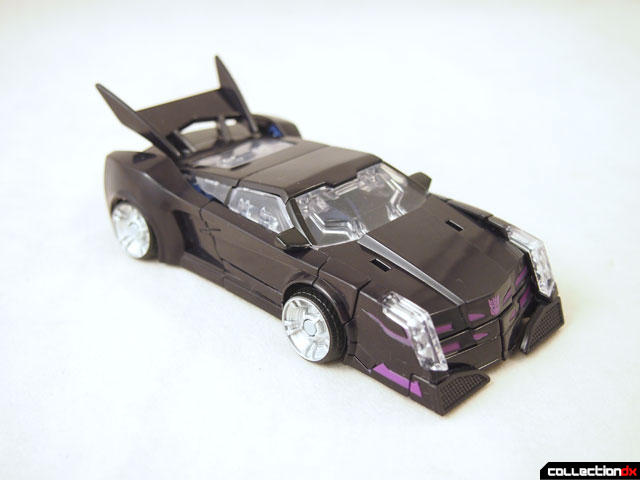 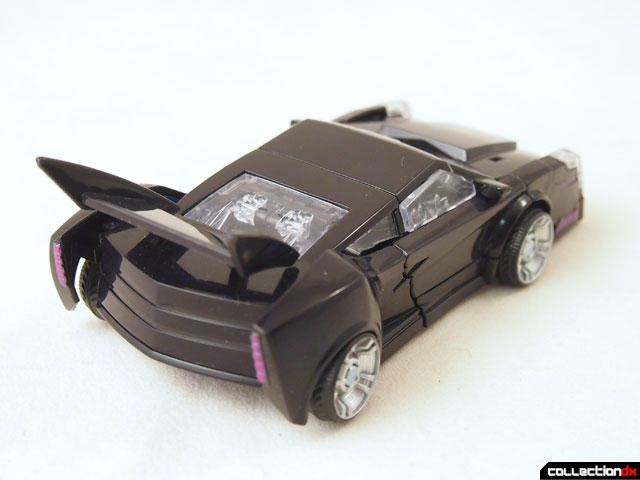 In vehicle mode, Vehicon is molded in quality black plastic with purple paint apps and clear plastic windows and headlights. The wheels also have paint, making them look, you know, like wheels. 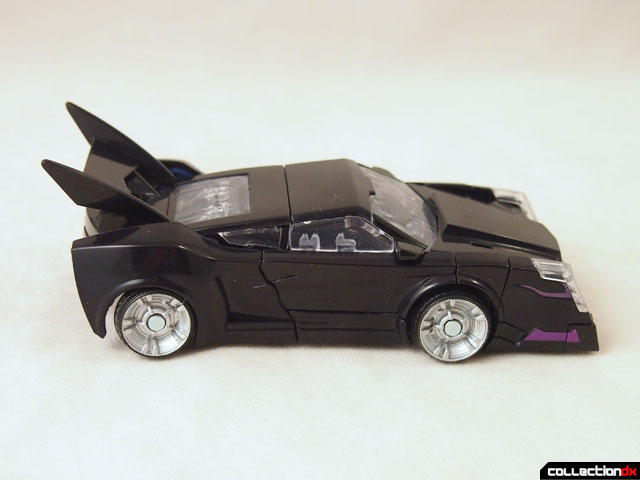 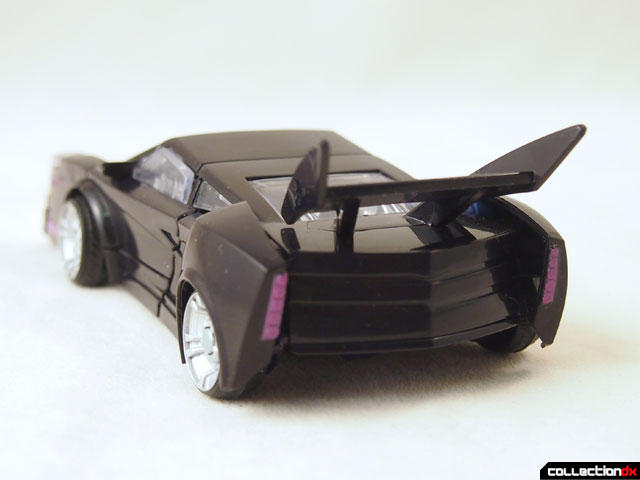 I had a little issue lining up the panels in the front of the car, but with a little work you can get it to look good. Tolerances are tight and space is limited, so each part has to be properly set for it to accommodate vehicle mode. 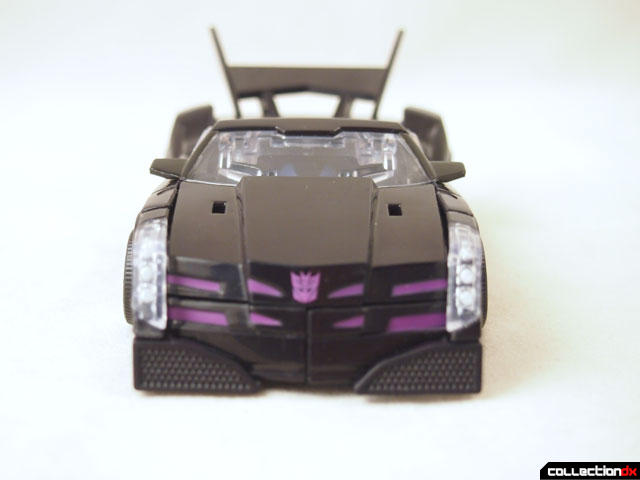 Unlike some other releases in the Prime line, Vehicon does not have any 5mm ports on the outside of the vehicle. Instead, there are two slats in the hood in which you can attach the small gun when not stored underneath. 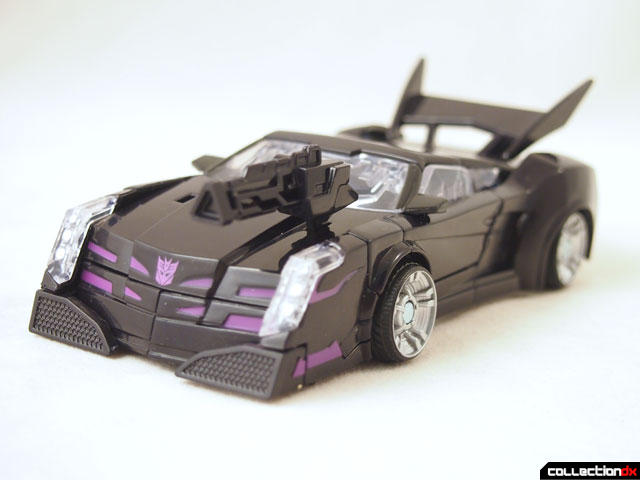 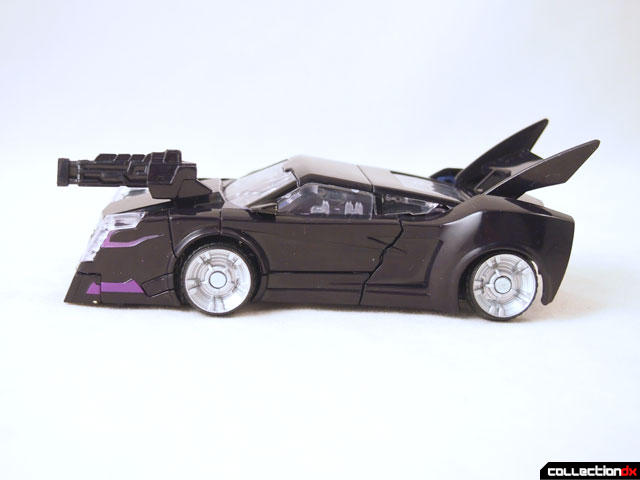 Underneath is tight and tidy. You still have a robot face looking back at you, but it’s not just the shape of a body underneath. 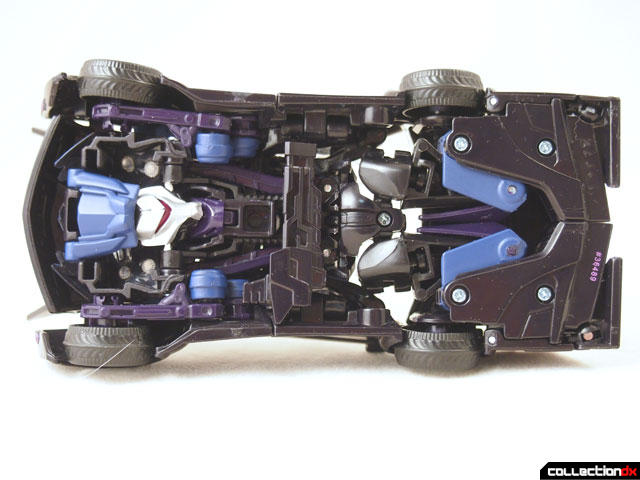 Yes, the First Edition toys are more difficult to transform than the regular releases, but anyone who’s played with a Transformer before should be able to figure it out. It is more intricate than the Prime releases, but it is inventive and original. There’s no reason why this shouldn’t have been a regular release. 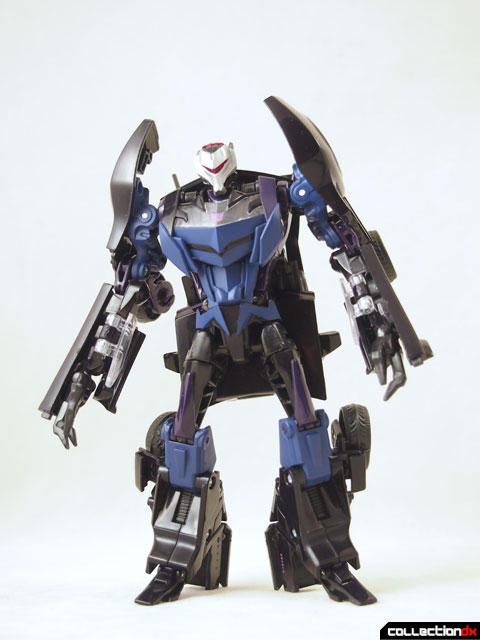 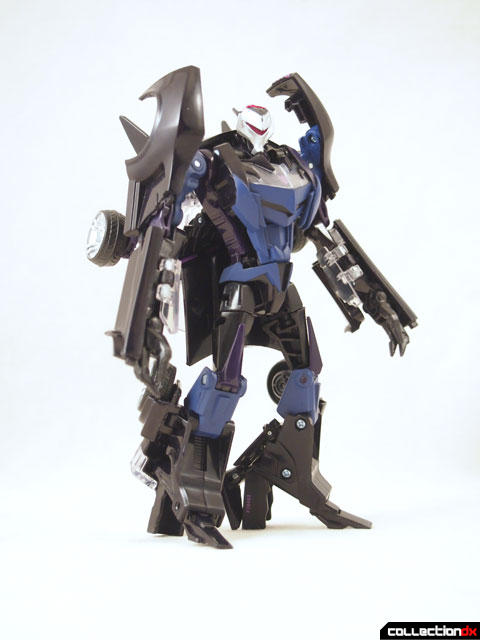 Robot mode is ominous and deadly. It’s a shame that Vehicon is essentially cannon-fodder in the cartoon as the character has a lot of presence. 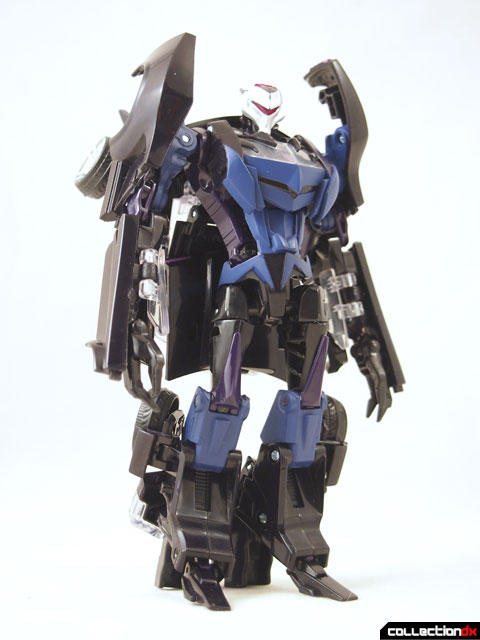 Vehicon is a bit bulky in the shoulder area which limits arm movement somewhat. This is one area where the Prime version is a little better. 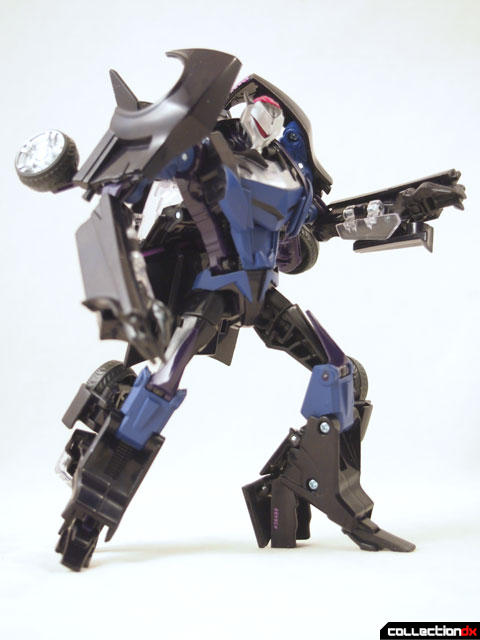 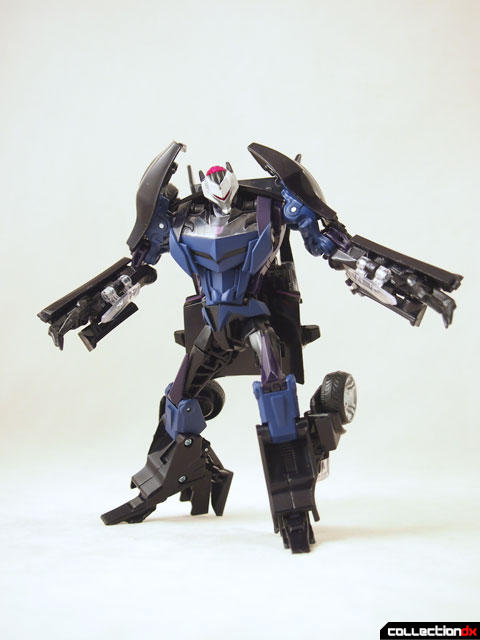 The gun can be attached to the 5mm port below either hand. 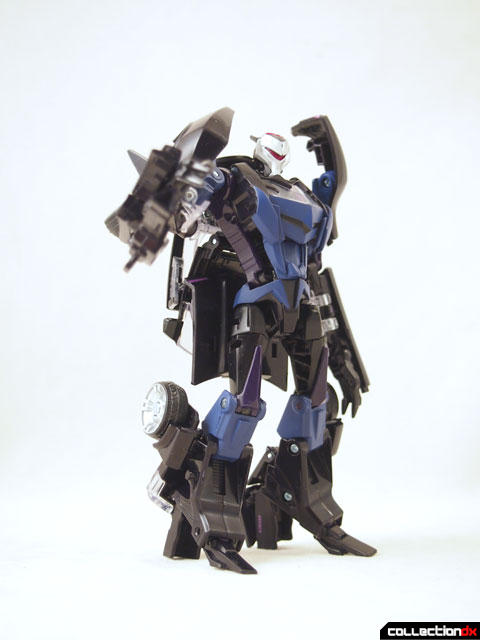 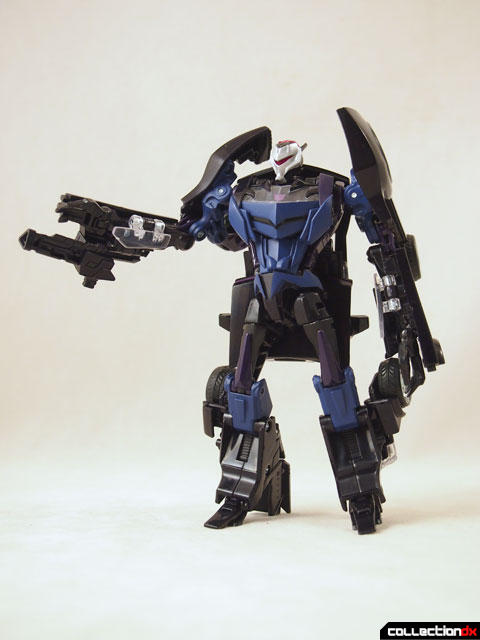 Overall, I really like Vehicon and he’s sort of spoiled me for the rest of the Prime toyline. If it weren’t so cost-prohibitive, I would track down the other First Edition releases as well.

I think the RID Vehicon is one of the few that is actually better than the first Edition as far as esthetics go. Both FE and RID Clifjumper look great, though different toys.

Yep I agree on the being spoiled part. Now everytime I look at the new TFs that are on shelves none of them stack up to what the Vehicon is be it first edition or the regular Prime version. I also agree with your thoughts on why didnt hasbro originally release those here instead of giving us the ugly dumbed down versions. Another reason why I just prefer to import my robots properly. US retail shelves have failed me too many times already, I rather pay extra money to have a nice toy in hand.
Vehicon is probably my favorite new transformer and is well worth the money, not to mention if you import the Jet Vehicon. Not sure if he'll ever see a US release.

Keep in mind that production was moved from china to viet nam. The paper twist ties indicate when viet namese toys started showing up. The ko market was huge in china and companies like igear and chms where clearly getting very sophisticated and/or directly using takara tooling to make thier own product. This might explain some of the engineering in the new toys. They in no way lend themselves to being pirated. They feel very disposable and punch and run. As if takara is trying to make those factories give up and move on to other things. It's yet another property war that leaves the fans unhappy.

Not a transformers collector but this one cool toy!

A nice blend of Classic and modern Transformer styling.

Also. This should be lockdown. Derrick Wyatt successfully created a boba fett equivalent transformer character and hasbro pulled the plug on his cn show when they got the hub. This is clearly the design but someone must have felt too awkward and slapped a new head on him.