One day I was randomly wandering around Best Buy, going through the various anime titles with cash buring in my pocket. After having just watched Giant Robo and the first few volumes of GaoGaiGar, Media Blasters releases seemed like a very solid option to go with since they seemed to release a lot of shows that related to my interest. Then my eyes happened upon an unusual cardboard DVD box with Tekkaman Blade on it, and it was a super cheap release with 16 episodes subtitles only. I couldn't say no at the low price of about a dollar an episode, and so it went home with me. Despite being slightly slow at the beginning, Tekkaman Blade in my opinion is one of the best shows to have come out of the 90s. So when Good Smile Company announced that they would be releasing a figure of everyone's favorite Space Knight, I was quite excited to get my hands on him. And after extensive delays and push backs, month after month, nearly six months after its initial release date, Tekkaman Blade was finally released at long last.

Out of the box Tekkaman Blade is covered with hard angles and lines everywhere, with super thin feet and gigantic pauldrons. The aesthetic may make him seem a little bit weedy or lacking, but it actually makes him look much more dynamic when in more extreme poses. 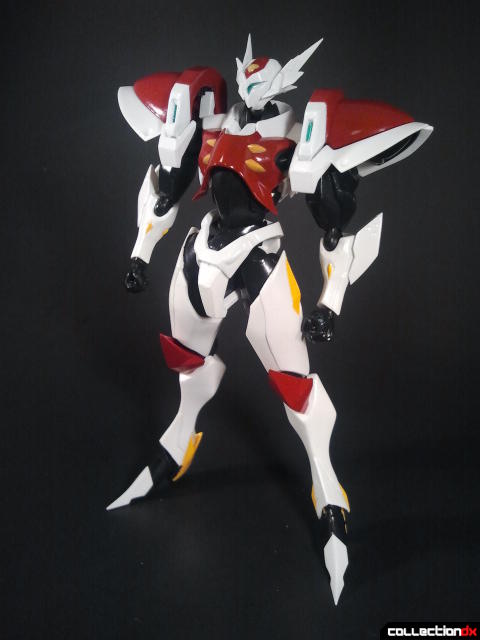 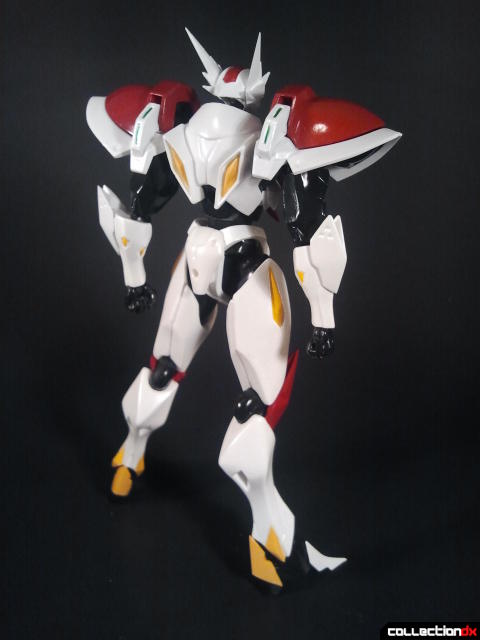 The biggest problem with Tekkaman Blade right off the bat is that he is very much out of scale with other Figmas and similar toys. He is about five-inch scale while most other figures are closer to six-inch. This makes it very hard to display him with other toys unfortunately due to his small size. Even Squid Girl agrees. 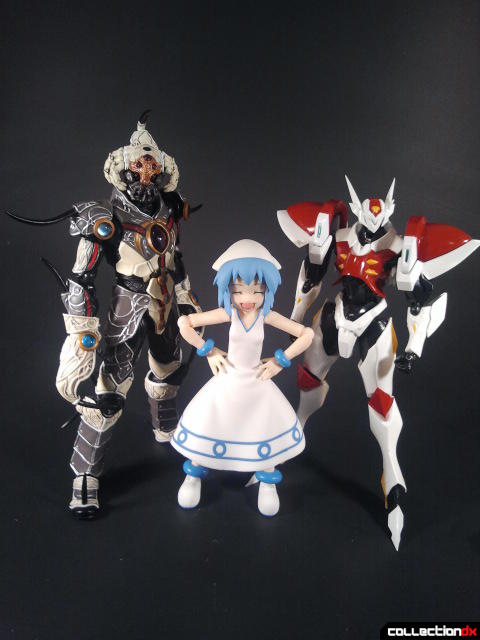 Speaking of poses, Tekkaman Blade is pretty articulated. Despite having very thin and tiny feet, they are able to hold a stance very well. There's even a heel joint which is kind of superfluous. 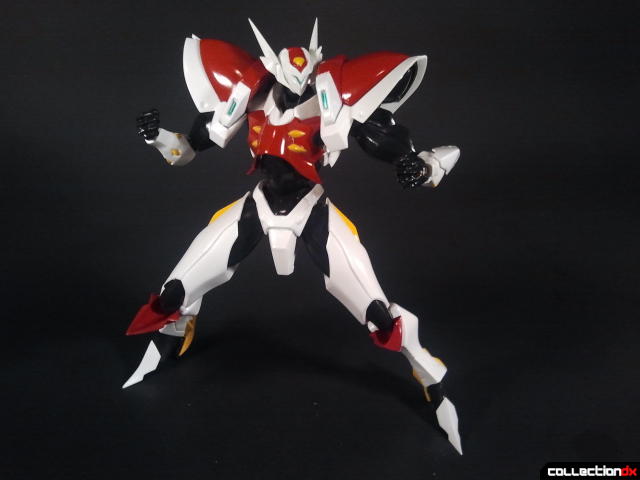 The way Tekkaman's shoulders work are a bit unusual at first. It's one Figma joint attached to the body, with another Figma joint used to attach the shoulder. It's very awkward at first, especially considering the size of the shoulder pads, but with a little play, it's easy to get adjusted to it and the shoulders don't get in the way as much. 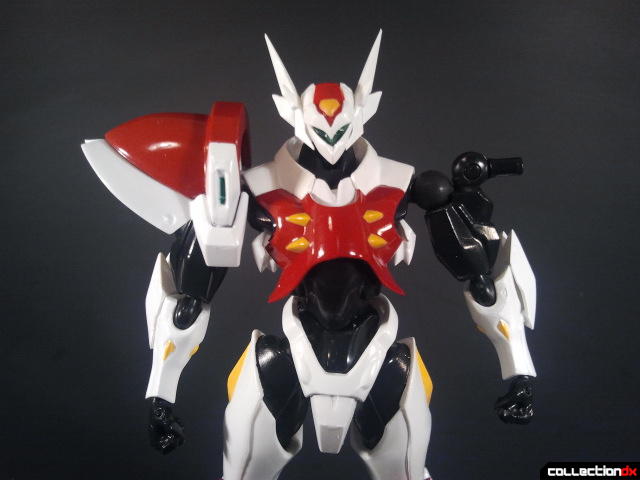 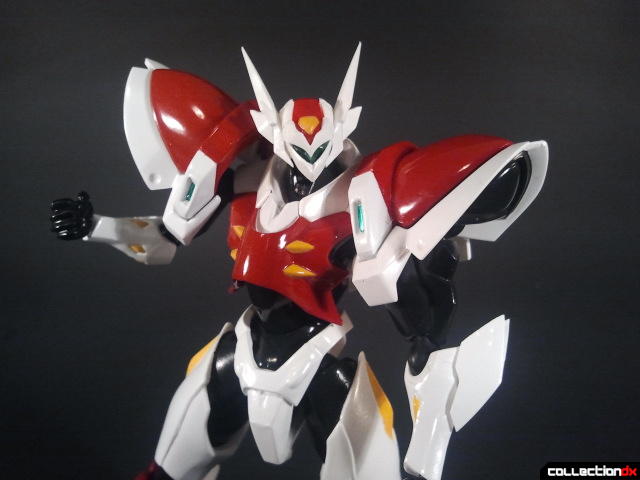 Tekkaman's head sculpt is very tiny and in a few ways it seems a little bit undefined at times. However after closer inspection and having the toy in hand I find that the head is still pretty accurate regardless. Another head is also included with a much wider visor. D-Boy's eyes are faintly sculpted into the visor and it helps make Tekkaman Blade seem more personable. Personally I prefer the default head though. It seems more stylized and dynamic. 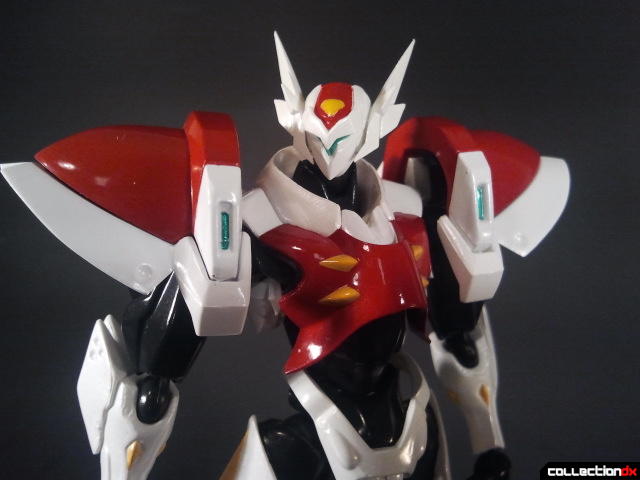 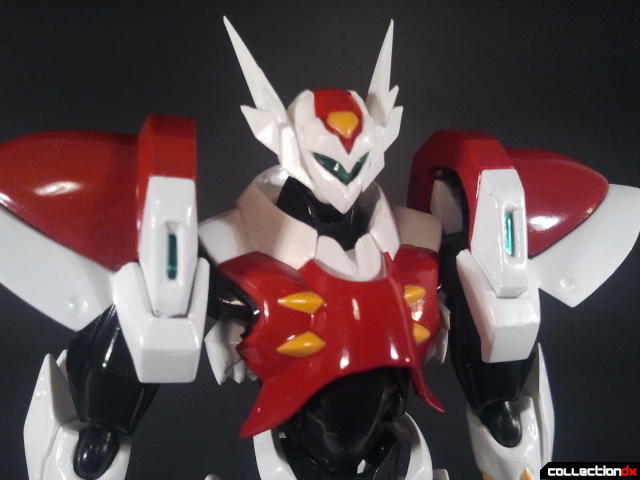 In addition to the alternate head, Tekkaman Blade comes with several accessories. Interestingly enough he is the first Figma I've ever seen to not come with five whole pairs of alternate hands. 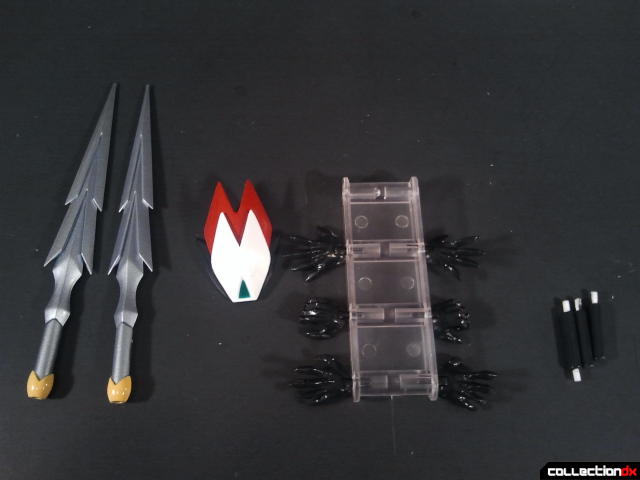 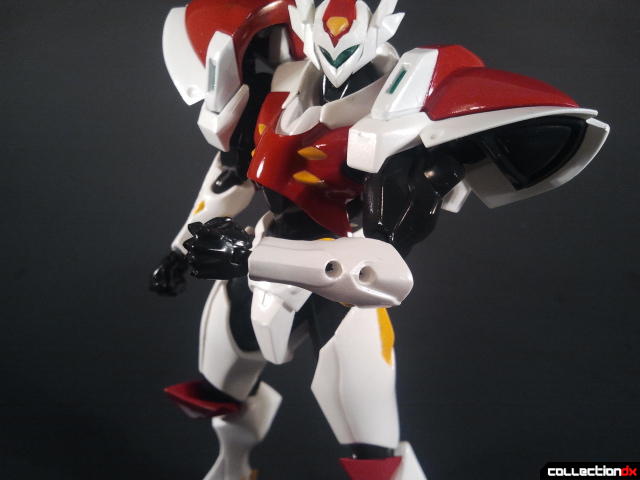 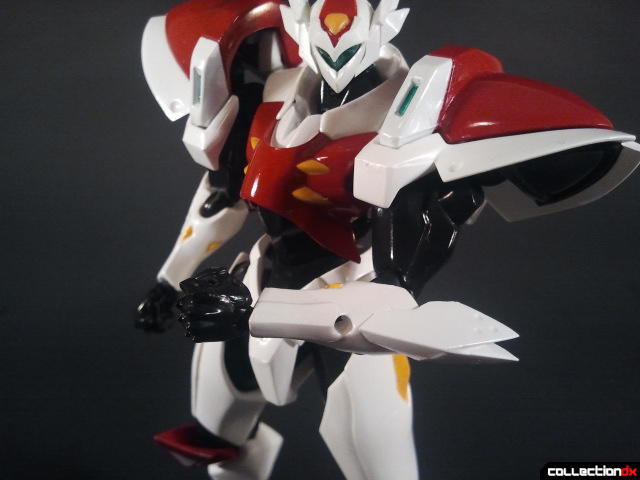 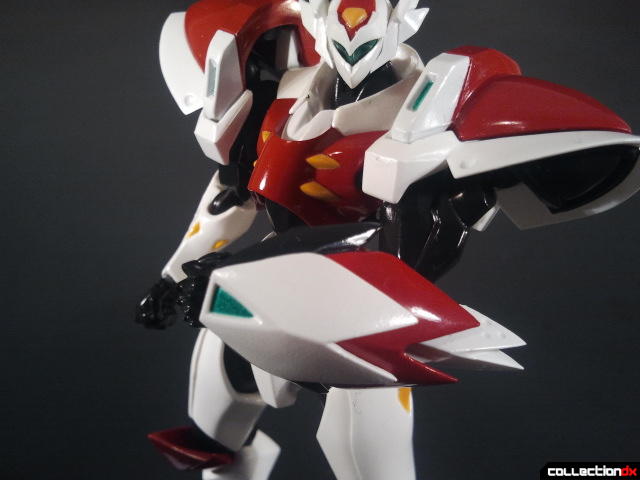 You can also plug it onto his butt. 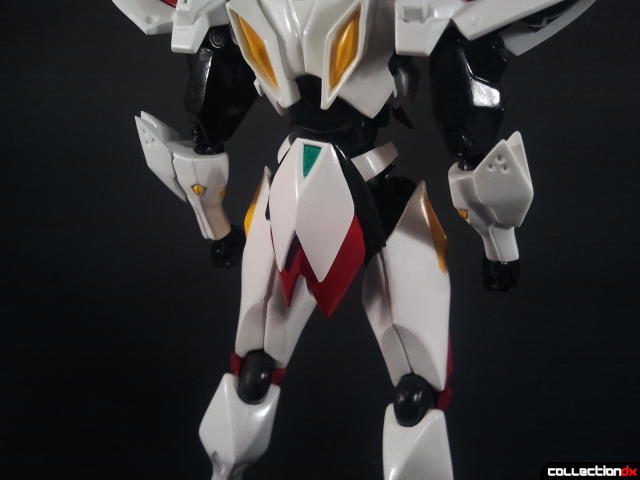 The main feature of Tekkaman Blade are his two blades though. The two blades come as separate pieces and then you plug them into the various hands for the different modes. I have to say these handles are done pretty poorly. There is paint splotched along the peg and some of the pegs are even crooked. Thankfully it's not so noticeable that it becomes a detriment to the toy. Tekkaman Blade still looks like a proper badass wielding these and stabbing Radam with them. 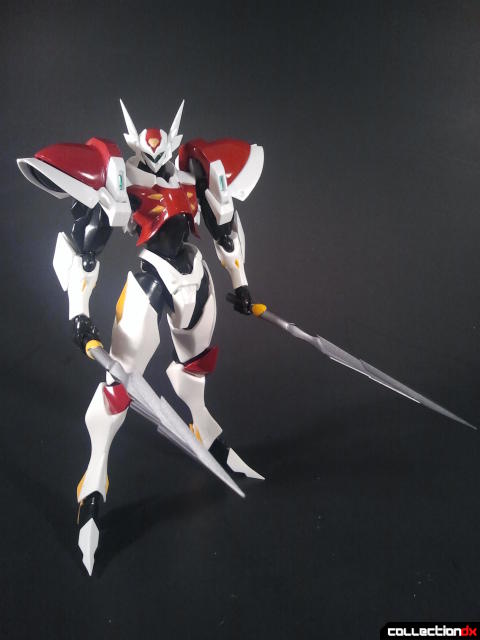 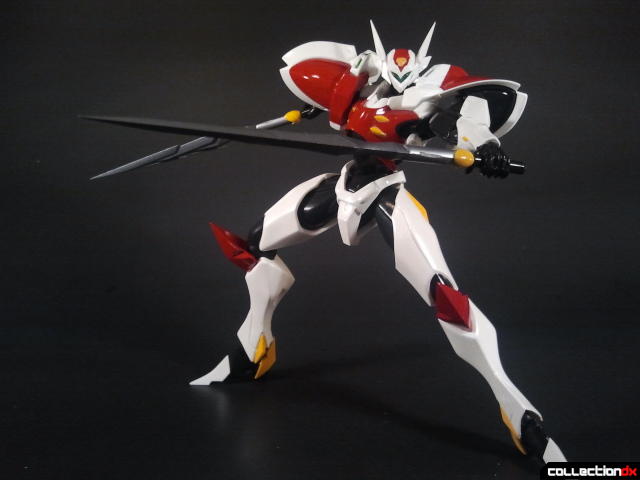 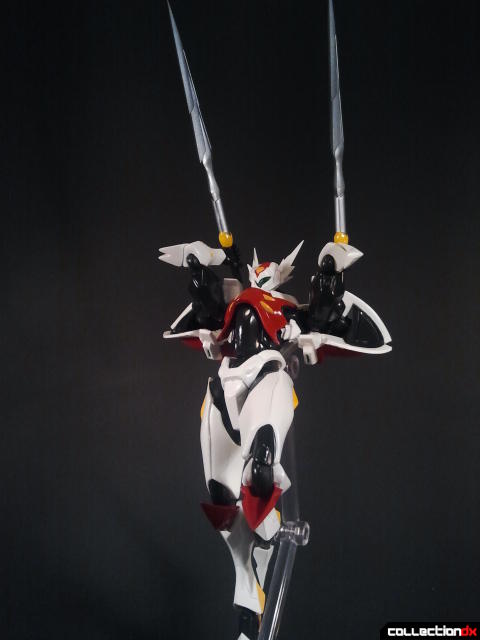 The best and most iconic way to display the blades is definitely to have the double-ended Javelin. With that and the shield, Tekkaman Blade looks near perfect. 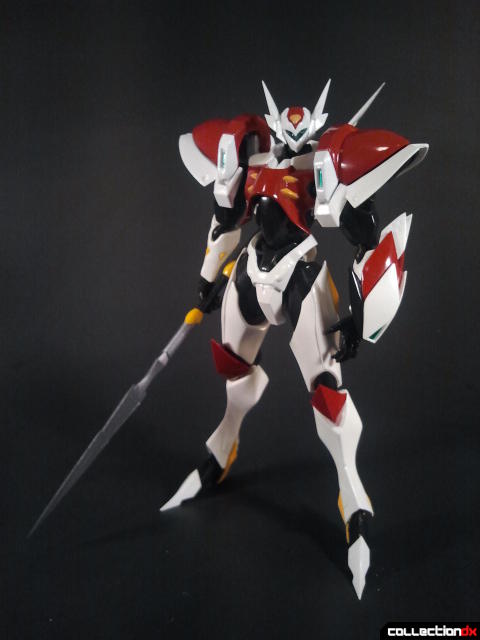 One thing I find annoying is that Tekkaman Blade really should have come with another pair of hands that could hold the blades at more of a slanted angle. Thankfully it's easy enough to just tilt the handle and have it stay in place regardless. 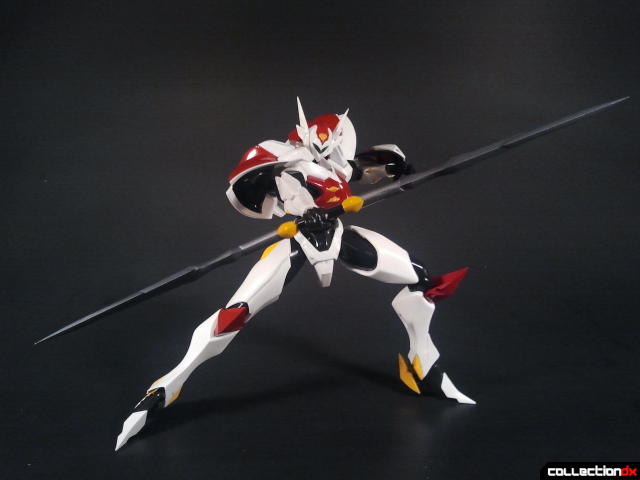 Tekkaman Blade has one more gimmick and it's quite the big one. It's also part of the reason that the toy was delayed as long as it was: the Voltekka. Tekkaman Blade's final attack where he shoots a giant blast of energy from his shoulder cannons. 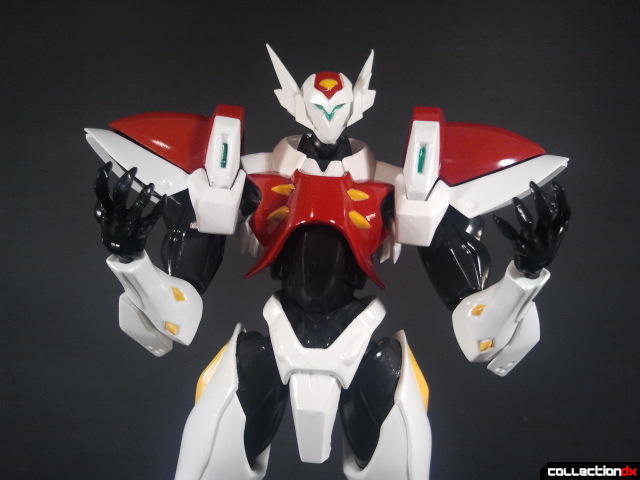 The gimmick is easy enough to use. You just have to lift up the sections of the shoulders to reveal the cannons underneath. It does look pretty cool, but the exposed Figma joints and the fact that his shoulders are hollow kind of hurt it. 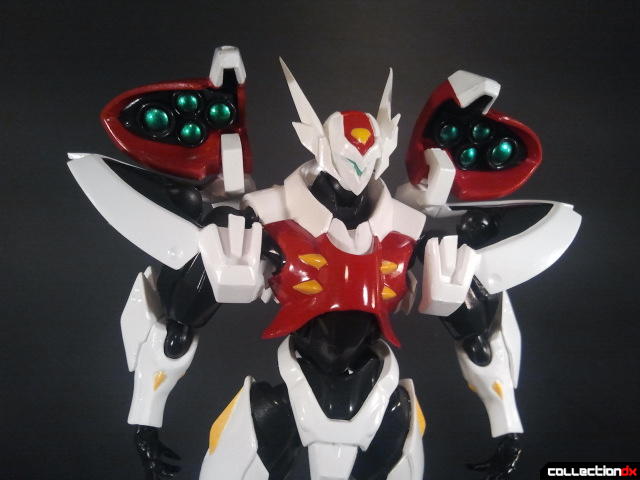 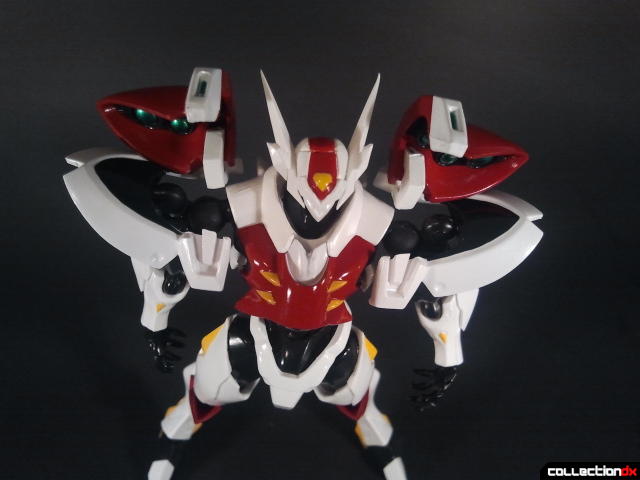 Despite that, Tekkaman Blade still looks fantastic when posed with the Voltekka. 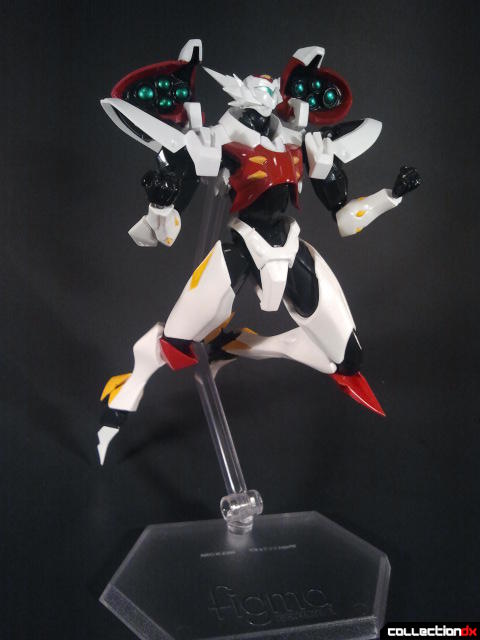 After all of the delays and concerns over this toy, Tekkaman Blade is in a few ways a bit disappointing. He is lacking accessories and hands, some of the sculpting is a bit rough at certain parts like the head, and he some how manages to not come with enough hands, something that I didn't think Figmas were capable of doing. Yet despite all of these problems, I actually really like this toy. I got Tekkaman Blade the same day I received three other Figmas, and he was the one that I could not put down or stop messing with. He is a very playable Figma, which is rare when I am often very worried about how frail some other Figmas can be. As a huge fan of Tekkaman Blade, it makes sense for me to like this as much as I do and look over its several flaws. I know other people have been disappointed in this guy, but I think underneath all of that you still have a very fun action figure of one of the most unfortunate and unlucky main characters ever. 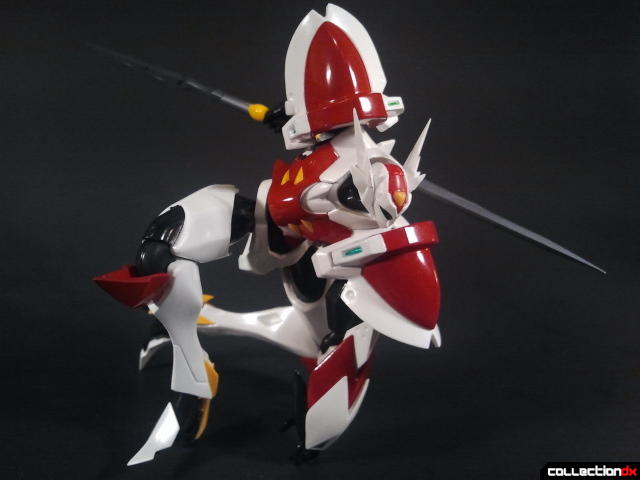 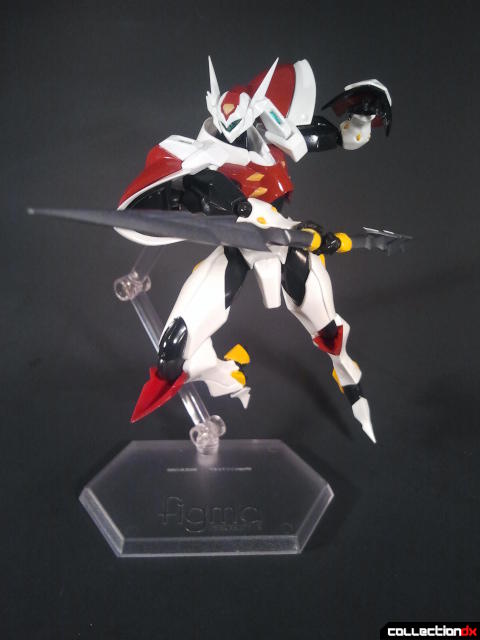 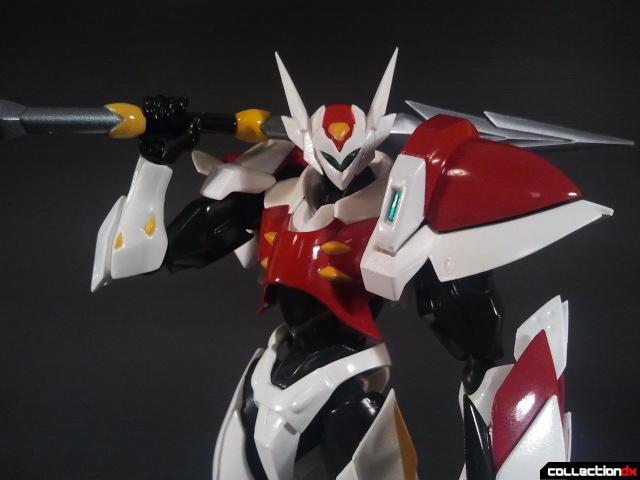 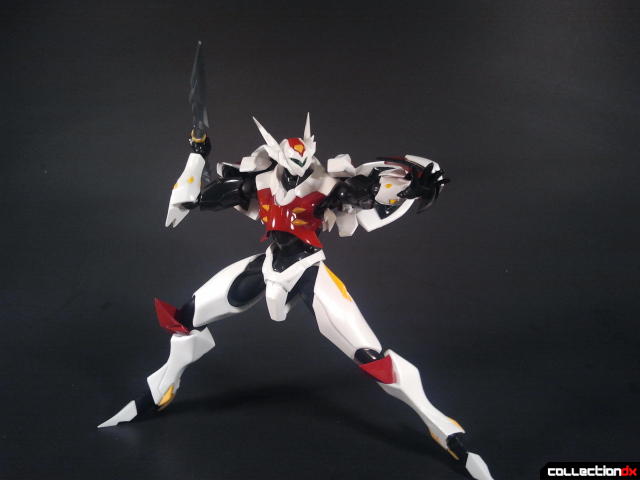 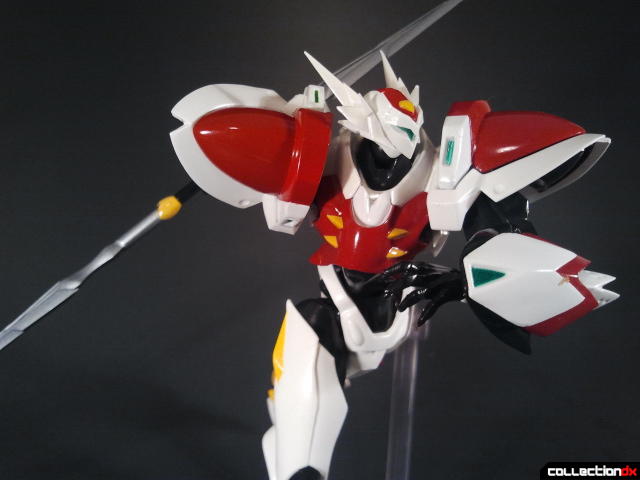 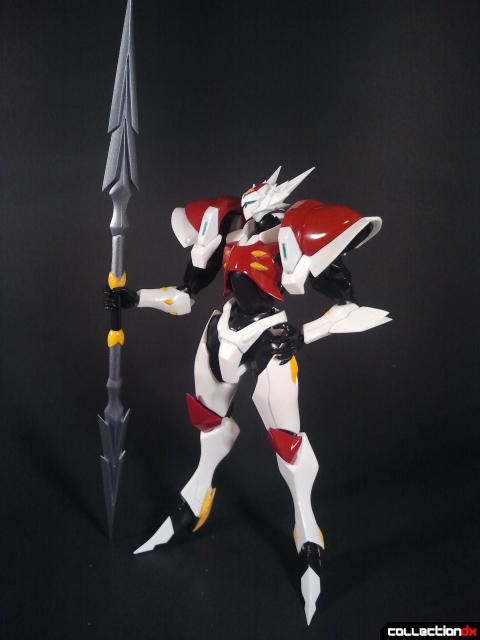 10 comments posted
I originally had this and

I originally had this and Evil on preorder but cancelled it because the delays made it overlap with other preorders I had. I had to cut way back on what I get, and this was before my room was flooded. Looks nice anyway but I try not to regret it.

I originally did not preorder Evil but after getting Blade in hand, I may need to get him as well especially since they are in scale with essentially only each other.

Nice review. Shame about those blade handles though.

Love this fgure! He's my first Figma. I've wanted a toy of this guy since I was a kid; they brought this over and dubbed it, calling it Teknoman, back then (early to mid-90's?). I didn't fully understand the idea of a dubbed anime back then (thinking of it as just another cartoon), so I was majorly confused that a show like that didn't have any toys associated with it. I had used other robot toys of the time to fill in for him, but obviously there were few that had that awesome look.

Long story short: VERY cool to finally have a figure of this guy! One of my top childhood faves.

I'm sorry- every time I see Tekkaman Blade, the first thing that pops into my head is the "Teknoman" theme.

I'm glad Max Factory has gotten a lot of people over the inksane idea that every character who has been involved with Super Robot Wars can only be done well in a high-end chogokin. Tekkaman Blade is far more of a Guyver type character than he ever was a robot too.

I mentioned it elsewhere previously, but compared to the Armor Plus Tekkaman Blade, this looks much more accurate to the original design. I think a lot of people forget that the Tekkaman Blade designs are in fact organic designs. Bandai seems to have focused more on the geometrical lines on that toy, while the Figma focuses on the curves of the design instead.

I think some of that has to do with the character's associate with the classic Tekkaman and also Blade's first outing as a Bandai plastic kit in the same vein as gunpla.

" this looks much more accurate to the original design."