Black Rock Shooter is a Japanese media franchise (anime, manga, video games, music, etc) which follows a group of schoolgirl characters in our own “Human” world and an alternate “Other” world, a techno-gothic fantasy realm. The property is defined by the unique style of illustrator Ryohei "Huke" Fuke. I find the whole thing inscrutable after casual research, but it all looks damned cool.

Strength is one of the titular character’s mysterious foes in the Other world, a tiny girl with giant monster robot hands. How can you not love that? Here’s strength in action. Very cool stuff.

Figma is Max Factory’s high-end action figure series. Strength comes in a handsome window box. The set comes with the base figuring, those monster robot hands, alternate hands, an alternate face, a few stick things (still don’t know exactly what these are) and a stand. 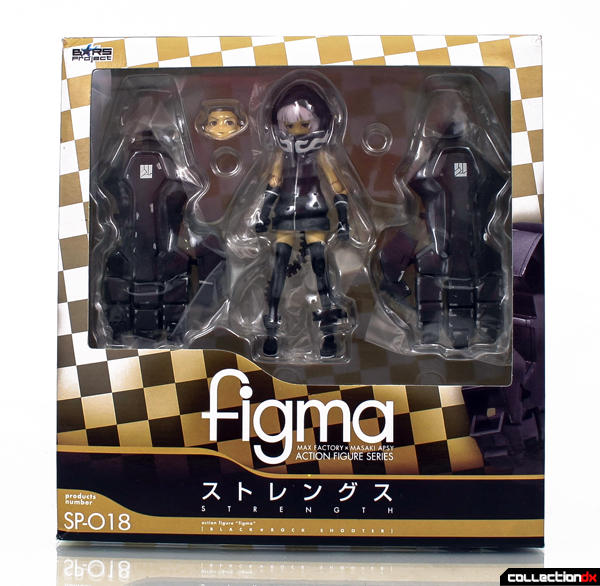 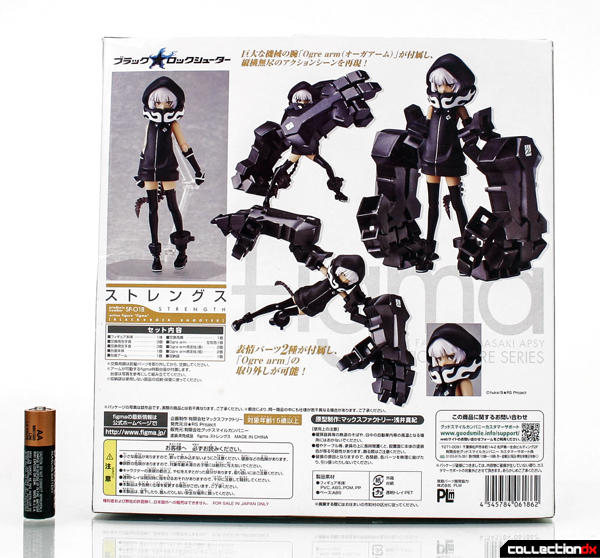 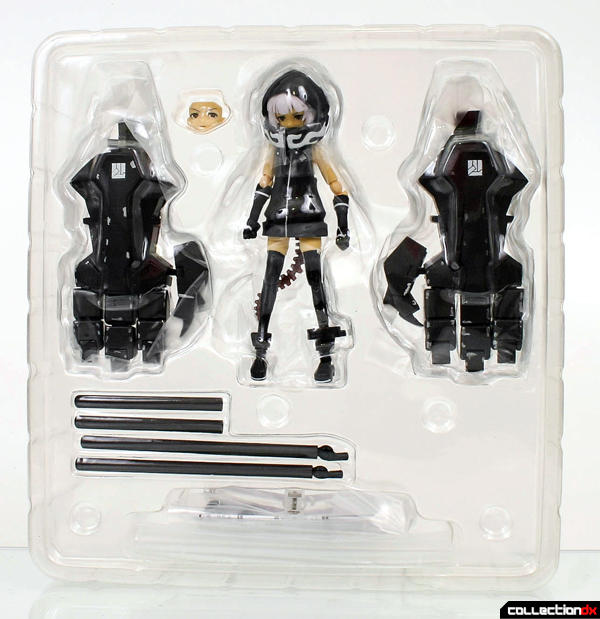 The base figure is a solid piece, if plain. The rubber dress limits posing. Finishes and sculpt are sharp. I like the rubber spine-like tail. 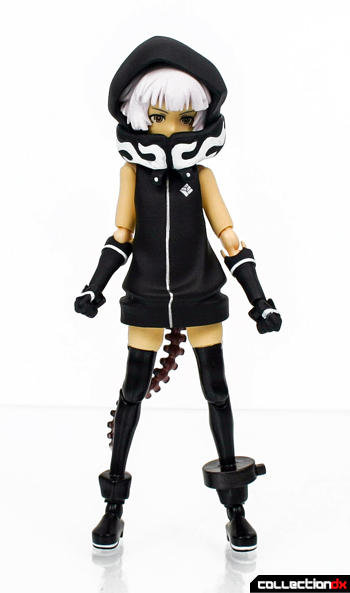 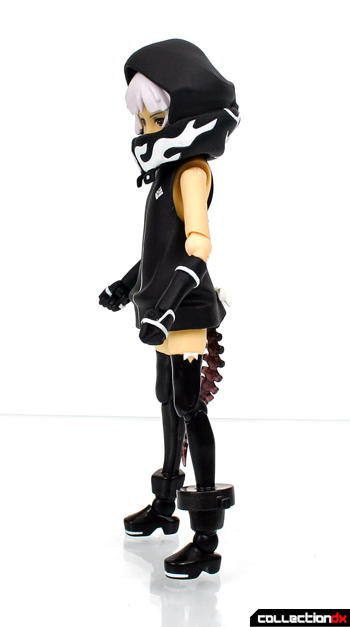 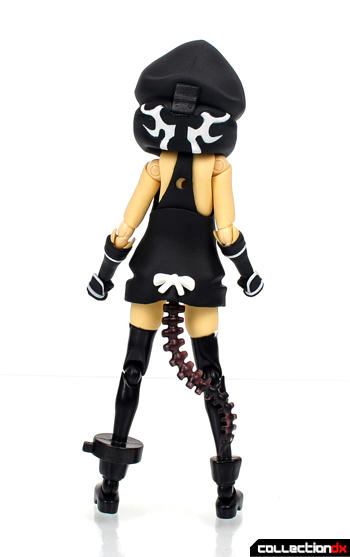 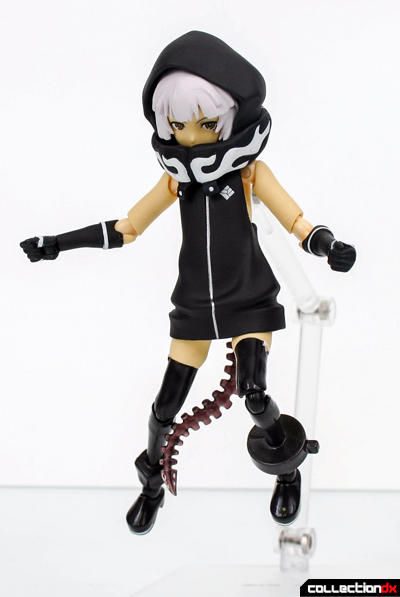 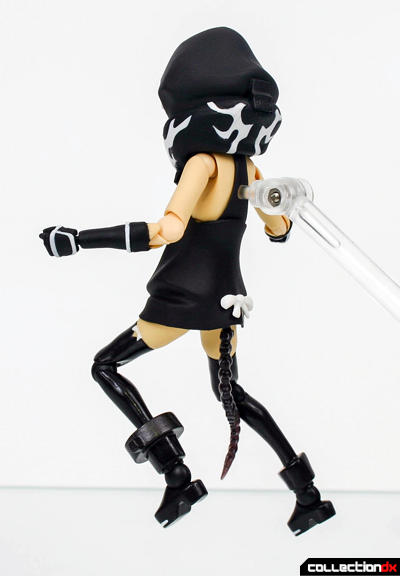 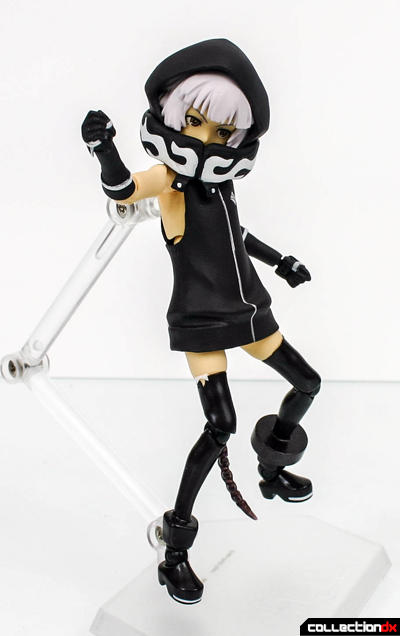 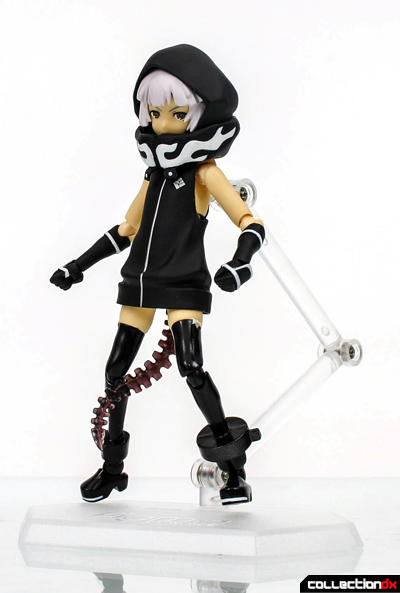 The girl figure is way beside the point for me, however. I just want to break out the robot hands. Strength’s human arms pop off at the shoulders to accept the prostheses. 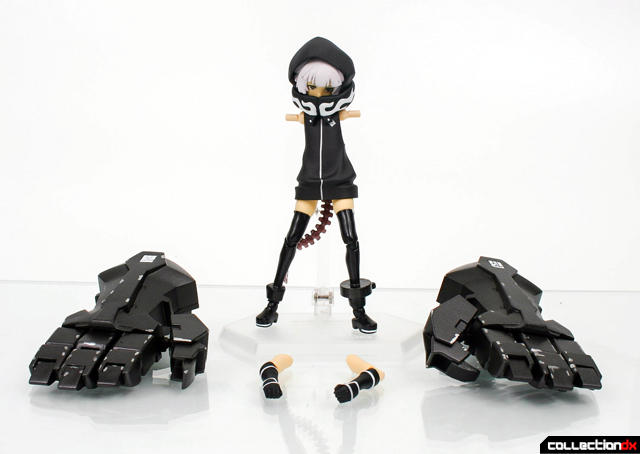 The robot hands, or “Ogre Arms,” are beautiful. The weathered paint finishes are a nice touch. The plastic is lightweight (it has to be), but very high quality. 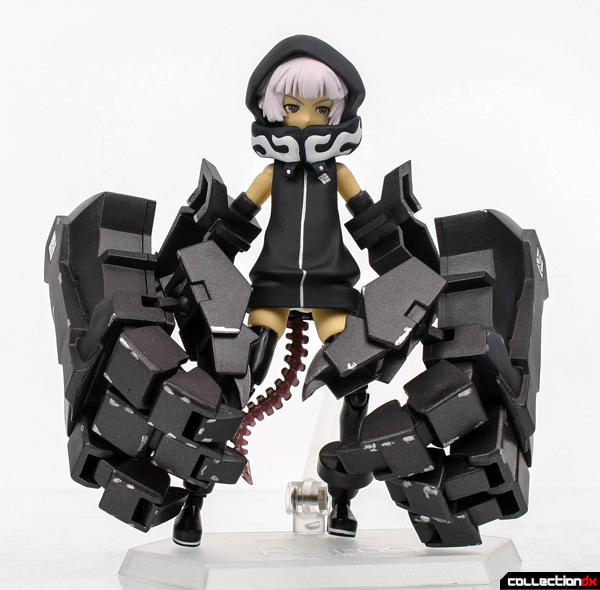 You can remove Strength’s cowl, but she looks so much better with it on. 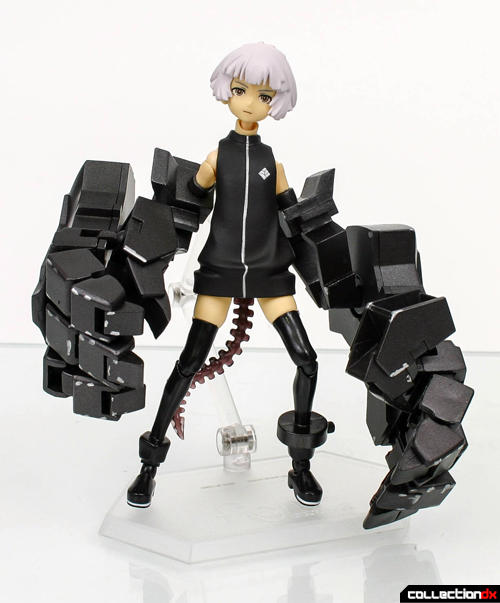 That ‘alternate’ face? Not really an alternate. To my eye, looks exactly the same.

The ‘stick’ accessories (someone please enlighten me) plug into the palms. 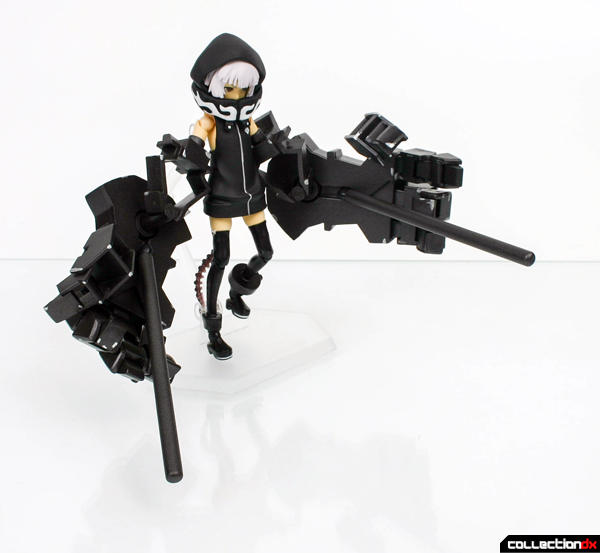 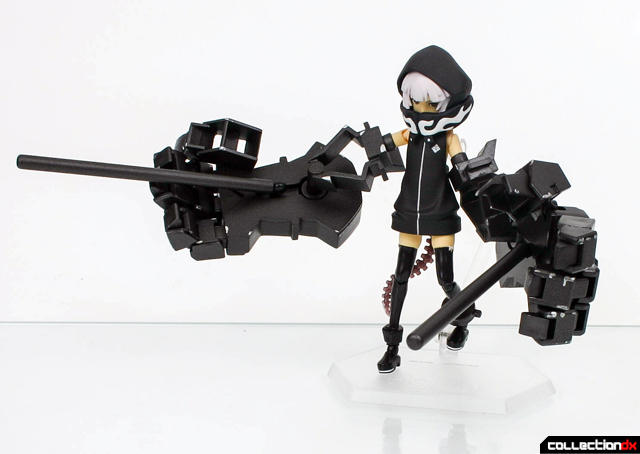 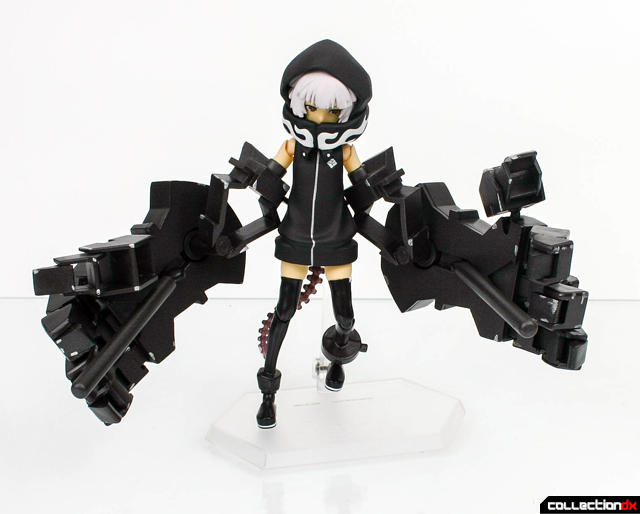 The arms, as you might guess, are too heavy for the tiny shoulder joints. It works, but just barely, and any arm poses above the waist are only fleeting. After minimal play, the arms just flop down. I can’t imagine this will hold up very well in time, although some clear nail polish could help with the joints.

No matter. Strength succeeds as pure eye candy, which is all it’s really trying for. A fun figure but not a superior plaything. 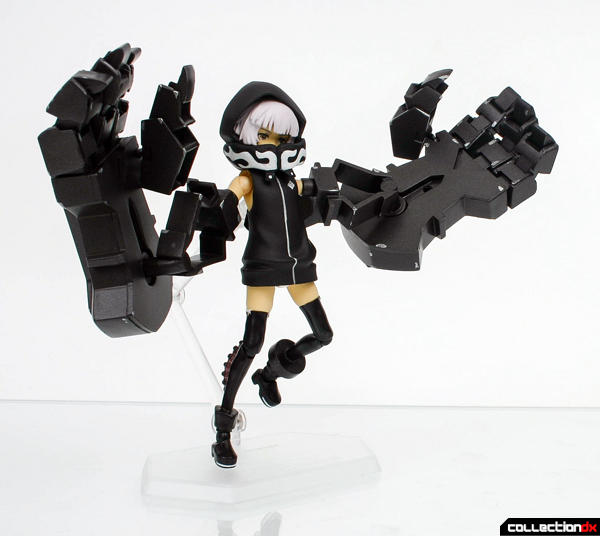 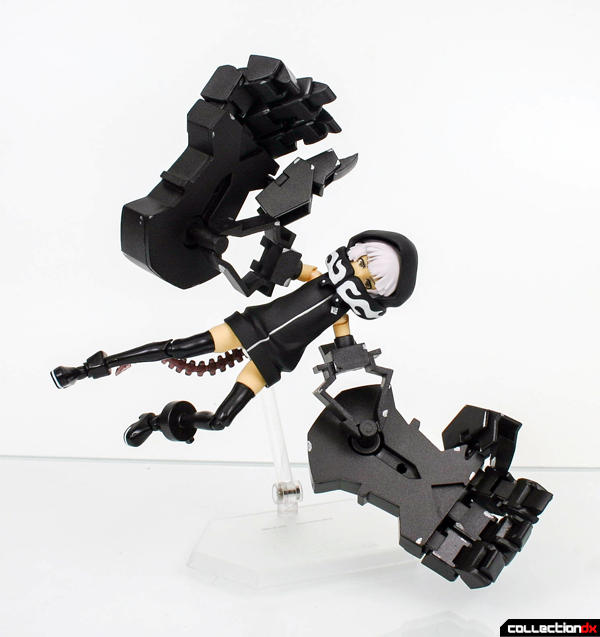 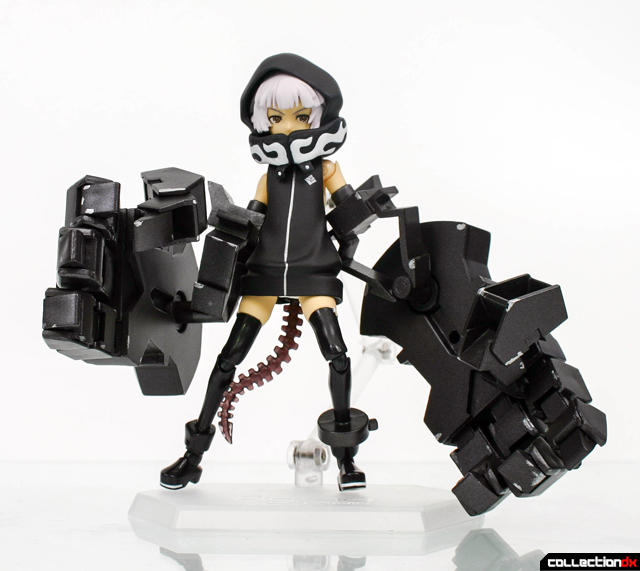 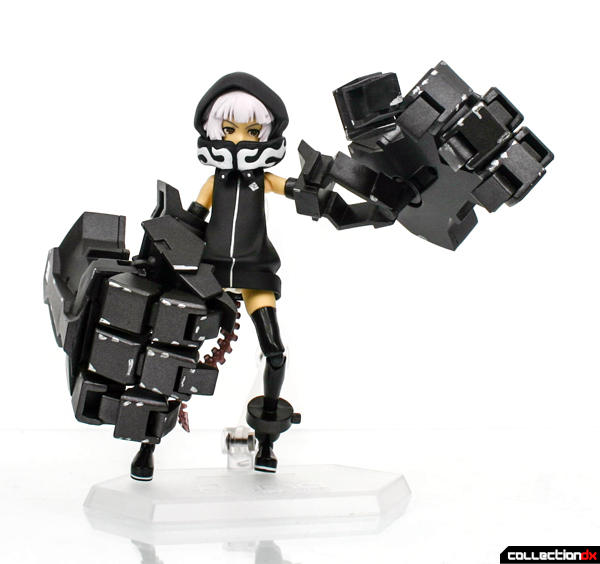 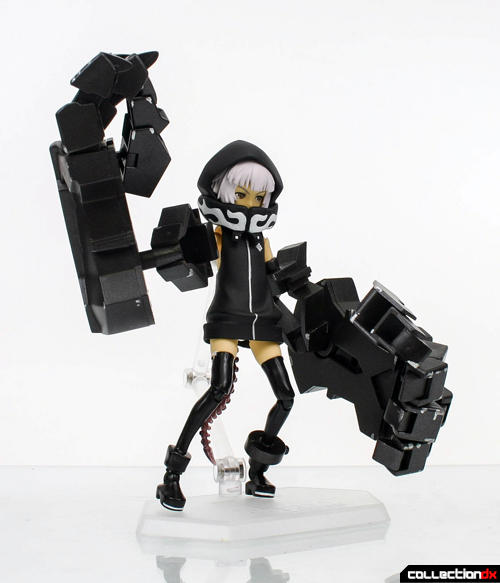 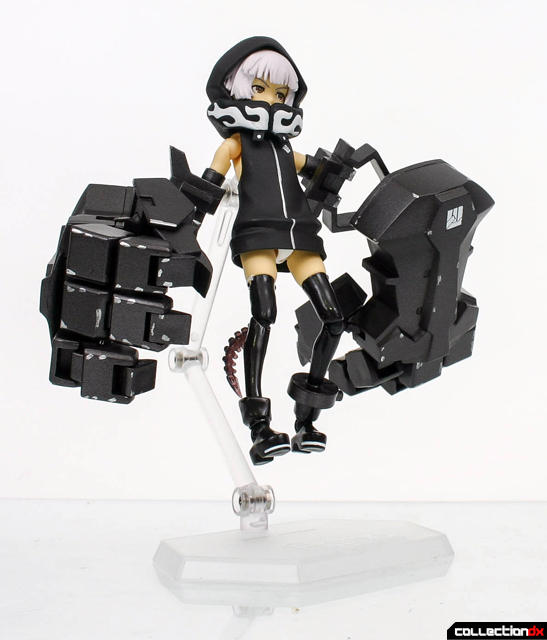 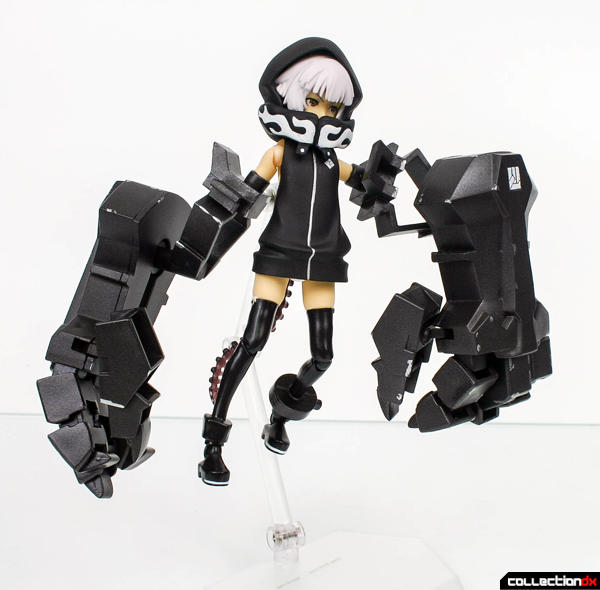 Great review and great pics! I am so jelly of your photography skills.

The extra posts that plug into her Ogre arms are meant to help keep them upright during posing like an extra set of stand pieces. A lot of lithe anime girl figures with huge weapons are doing that such as the clear plastic posts that come with Figma KOS-MOS.

No, see, examine the miniscule change of angle in the inner corner of her eye! The left face is the "angry" face. Well, not quite angry. She's a little miffed. Slightly perturbed.