Transformers are such a love / hate thing with me. With this latest Prime cartoon series, it's been more love. Not because of the show (which is fine) but I just love some of the toys coming out of this line.

Skywarp is currently a Japanese exclusive so it is not available in the current Transformers Prime toy line. Instead the line in Japan is called Arms Micron, due to the additional Micron toy included with each figure. It's essentially the same mold as starscream, but with different colors and wing attachments.

The box is interesting as there is no window. Inside the figure is packed in cardboard, with no twist-ties in sight. 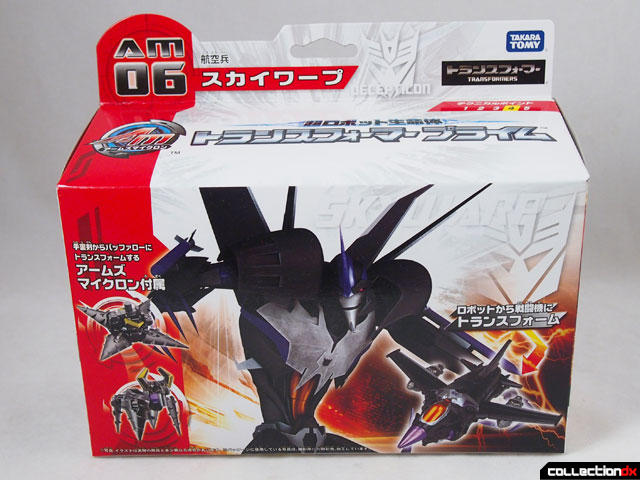 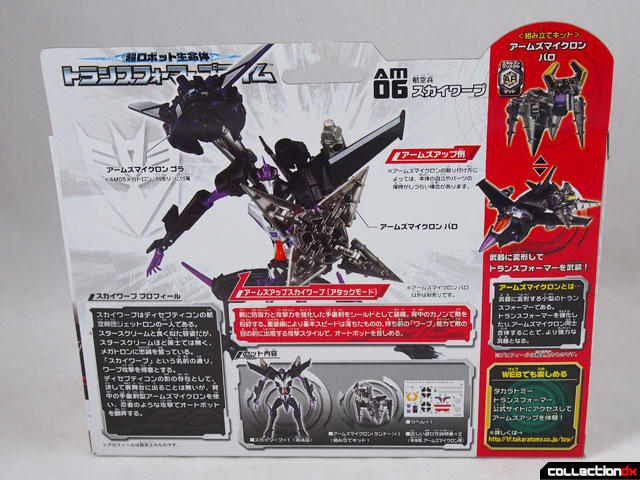 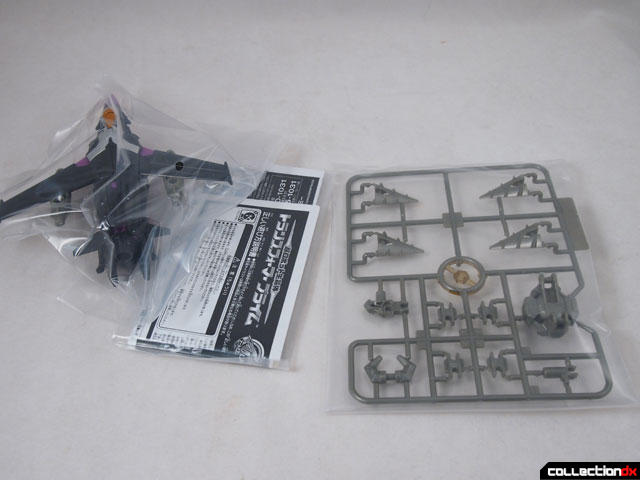 In vehicle mode, Skywarp is a black and purple jet. The color scheme is evil and effective. The sculpt is basic but stylized. Paint apps are nice, and additional details are added by applying the foil stickers. 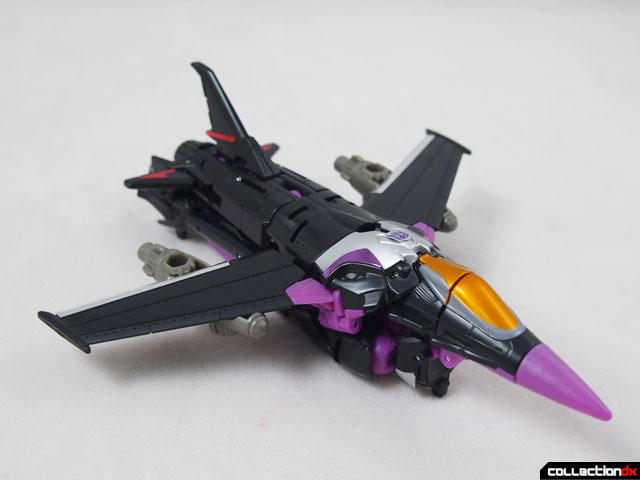 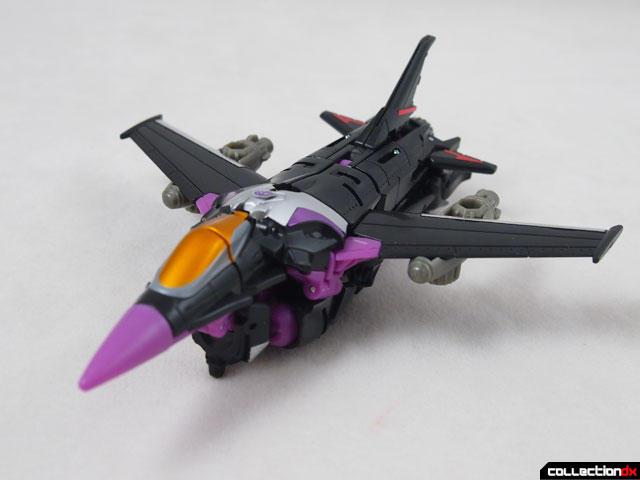 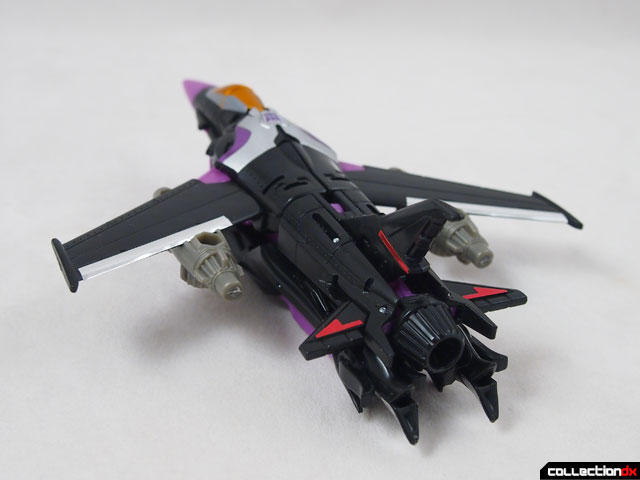 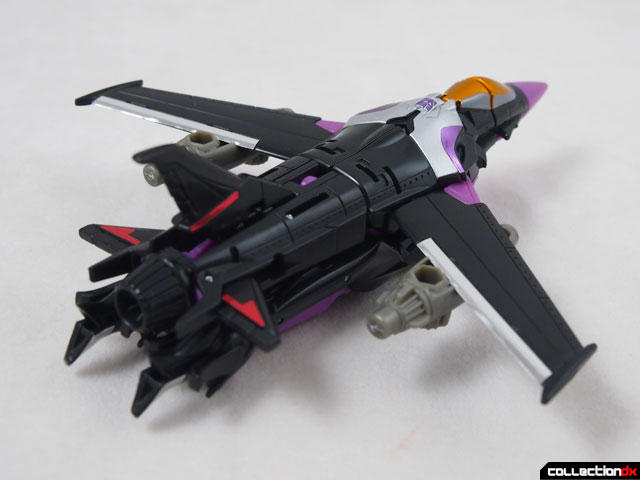 For safety reasons, the nose of the jet is made out of softer rubber. 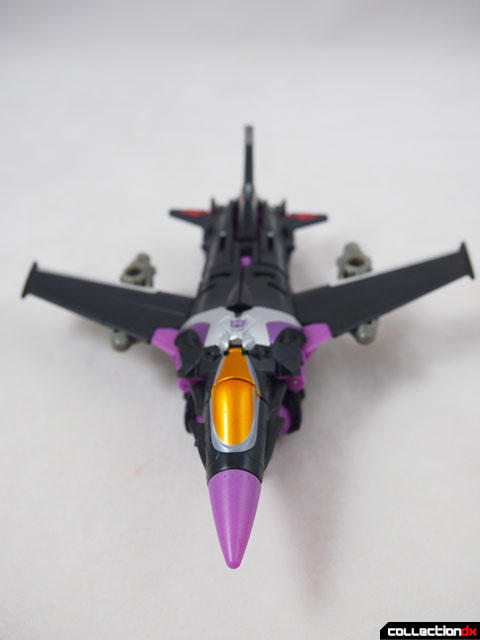 The underside of the Jet makes no effort to hide it's true robot form. There's no landing gear except for three molded on wheels. 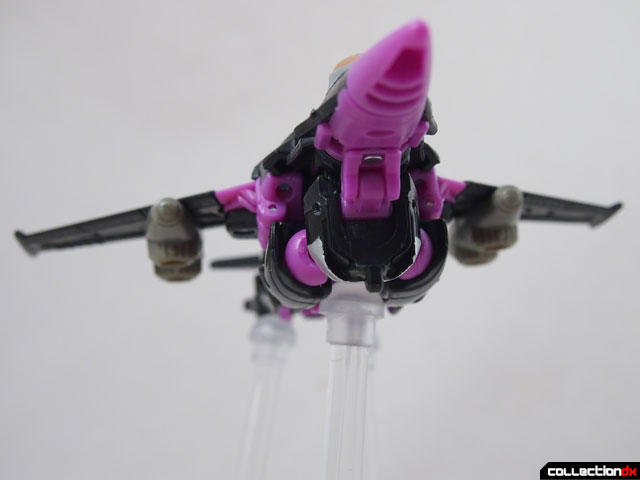 Transformation is efficient and interesting. The included instructions help, but once you do it once you never need to look at them again. 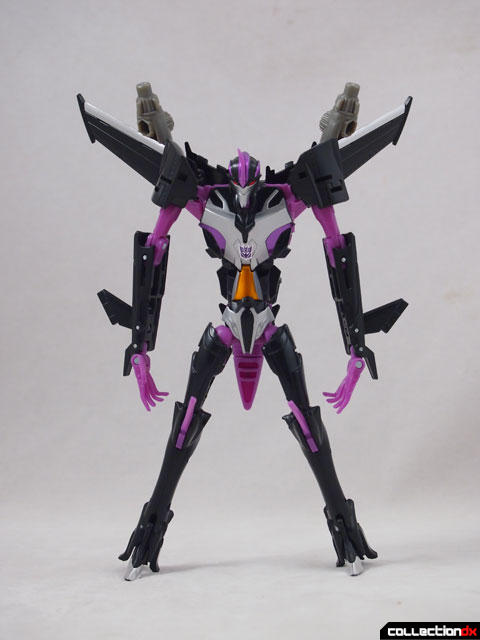 Robot mode is great. Skywarp is sleek and evil looking. 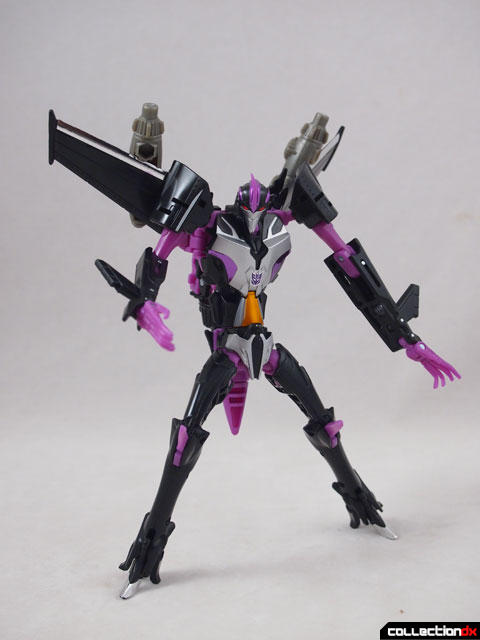 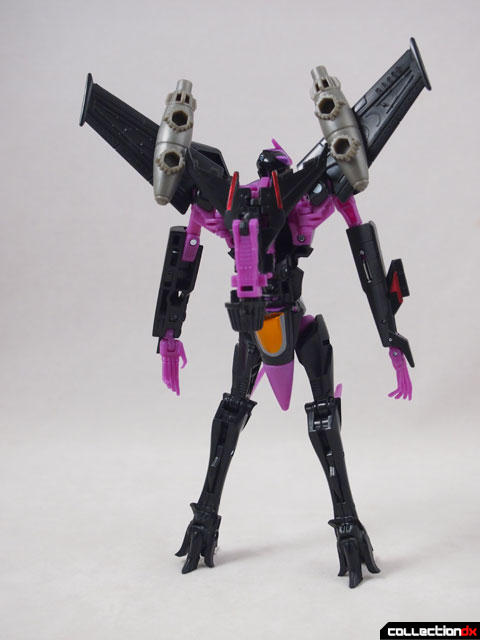 Articulation is not bad. The legs move pretty well but poses are hampered by lack of ankle joints on the feet. The toes move, but not side to side. The knees have these purple spikes that are also made out of rubber. they don't click into place so expect them to get bumped out of place when posing. 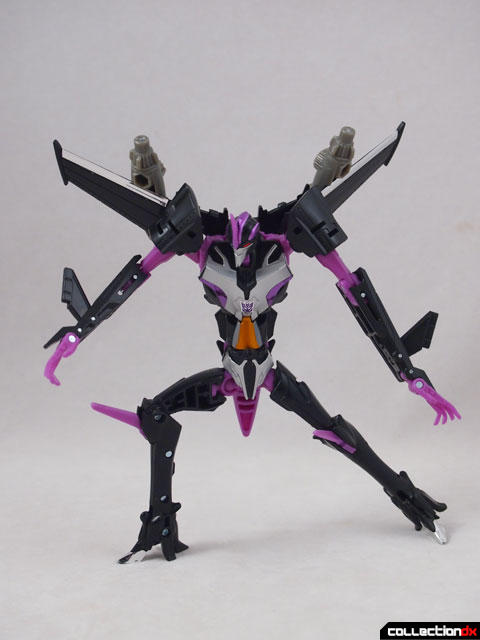 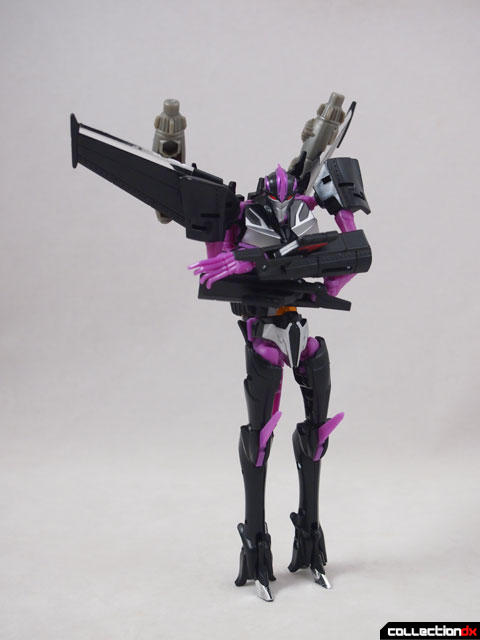 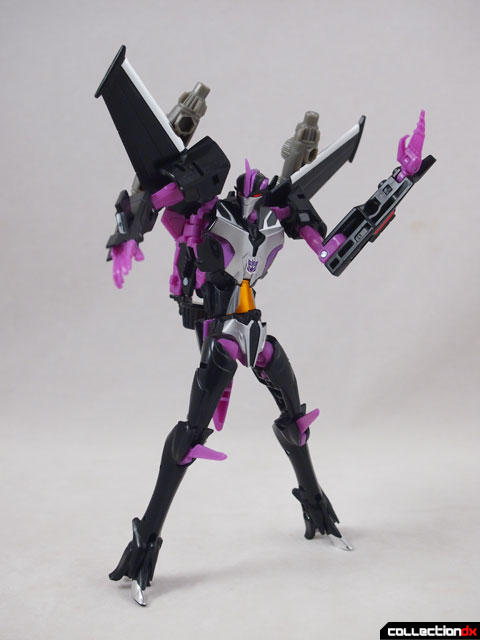 Included with the figure is a small robot called "Baro" (a Engrish version of Bull?). Sure enough it's a drill that transforms into a drill. The figure comes un-assembled on a sprue. You have to assemble it, as well as apply stickers. Be careful, as the fit is tight on many of the joints. I broke one of the clips when trying to assemble this. 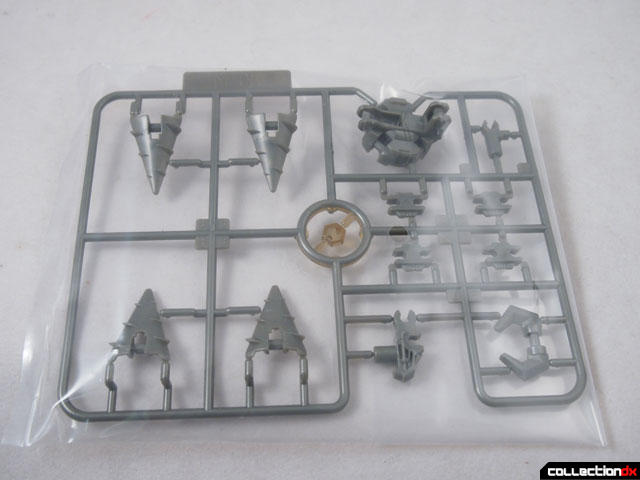 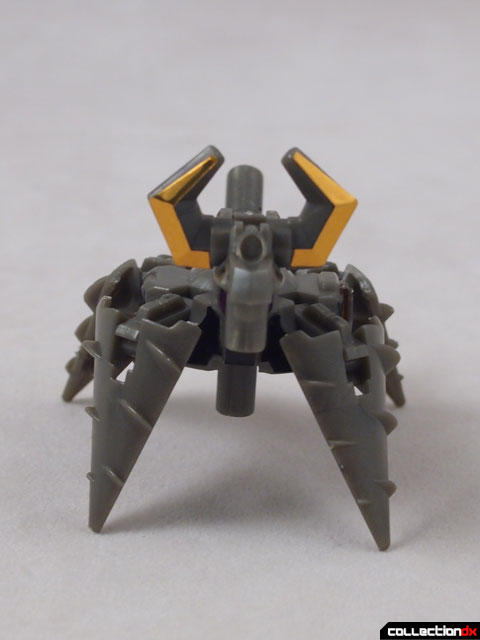 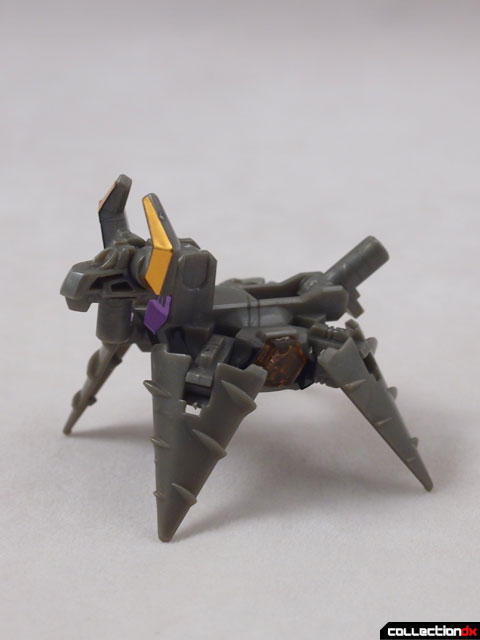 Baro can be attached to many of the connection points on the figure including the weapons on the wings and on the inside of the arms. It's a fantastic combination. Apparently Baro can also combine with other Arms Micron figures to make even cooler weapons. 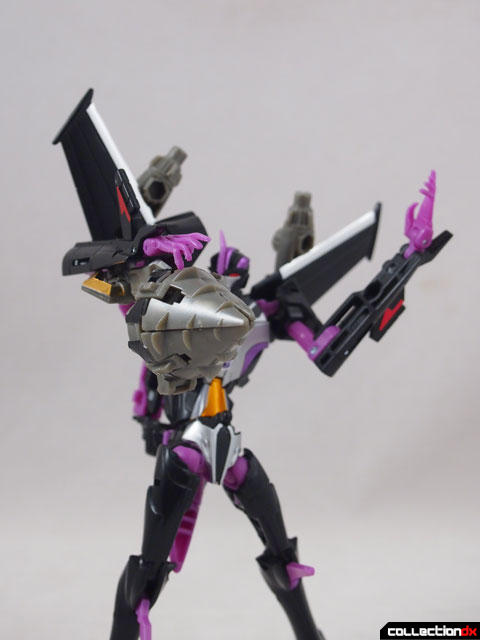 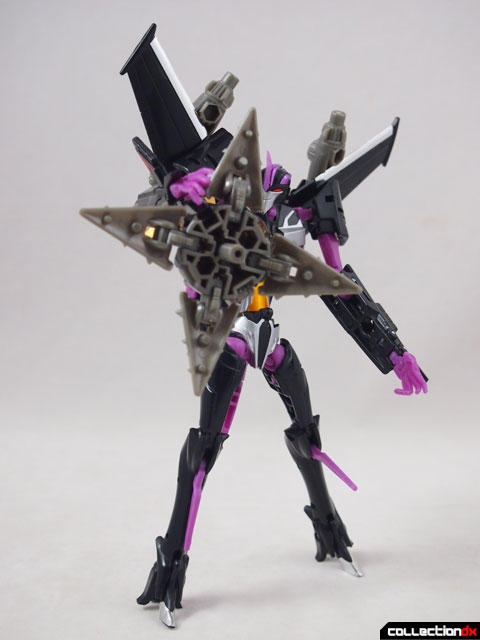 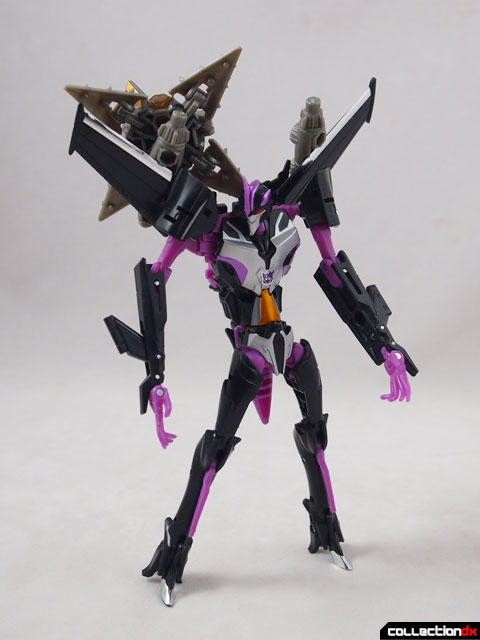 While the Transformers Prime toy line is cool, once again the Japanese version brings it up a notch. Not only is Skywarp not available (yet) in the US, but all the Arms Micron releases include foil stickers and a companion robot who turns into a weapon. Very cool. 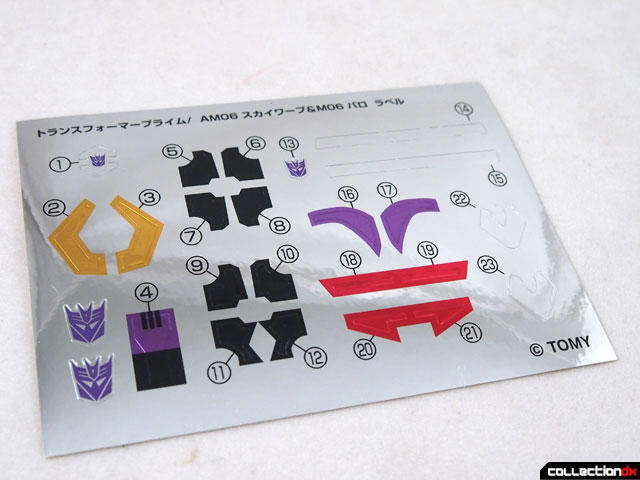