The King of Heroes, Sky High, appears courtesy of HobbyLink Japan. Get yours there!

Sky High is the superhero persona of the aptly named Keith Goodman. He is also the number one good guy on the reality show “Hero TV”. That is, until the aging Wild Tiger and the newcomer Barnaby Brook Jr. join forces to become the first superhero combination on the show and claim the title of the best crime-busters around.  It would almost seem unfair that Sky High loses to Tiger and Bunny's combined scores on the show, except that Bunny does most of the scoring on the team.

We are not here to talk about the mechanics or fairness of Hero TV.  Let’s get to playing with this guy! 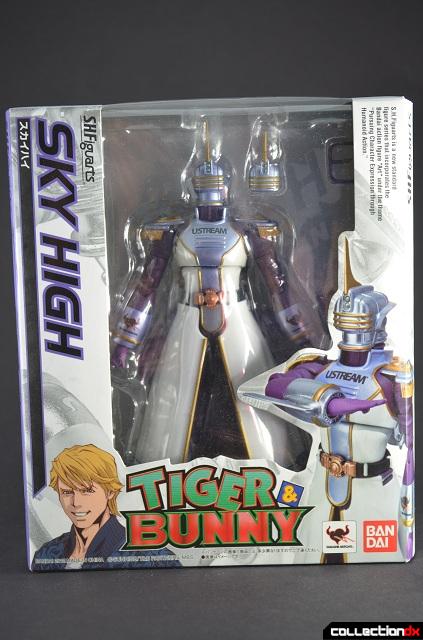 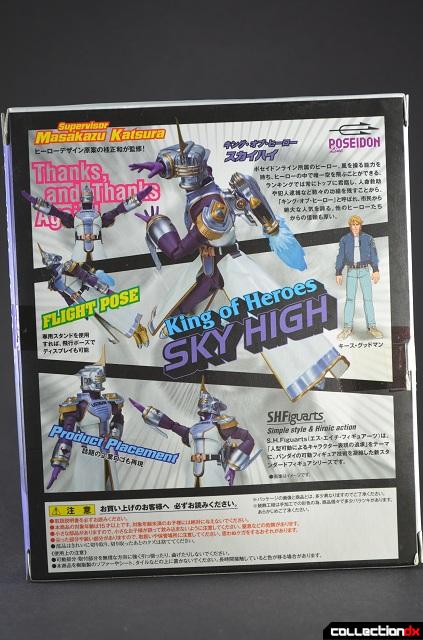 Once removed from the package, Sky High looks great. He has got that Rocketeer-with-a-trench-coat look going for him.  The purple, white, silver, and gold paint scheme is done justice some good paint apps. 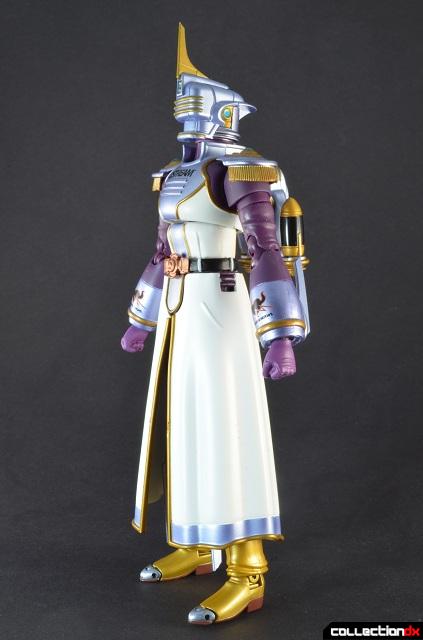 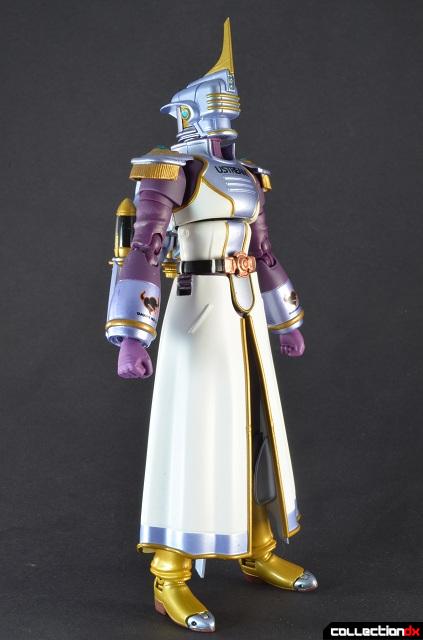 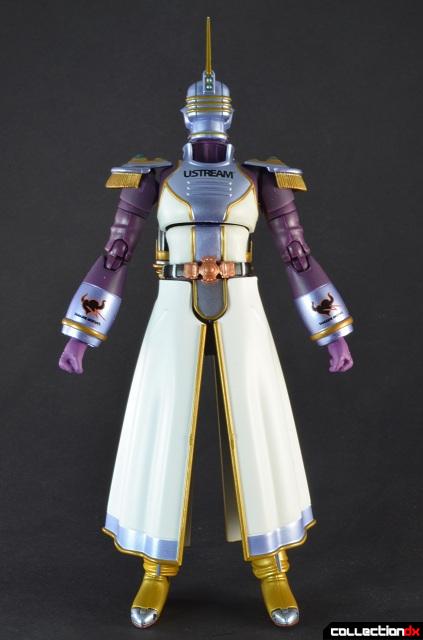 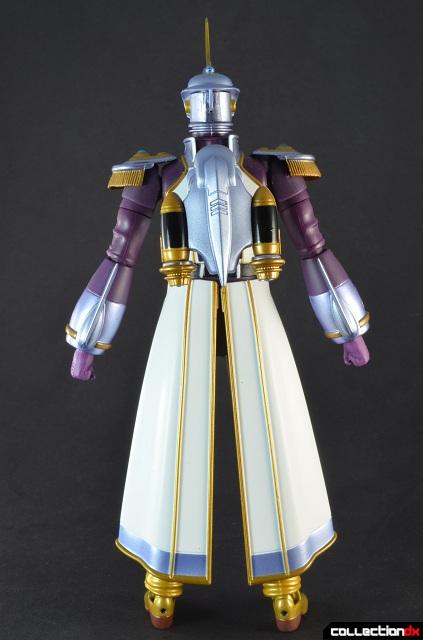 Like the other Heroes from Tiger and Bunny, Sky High's suit is branded with his corporate sponsors. 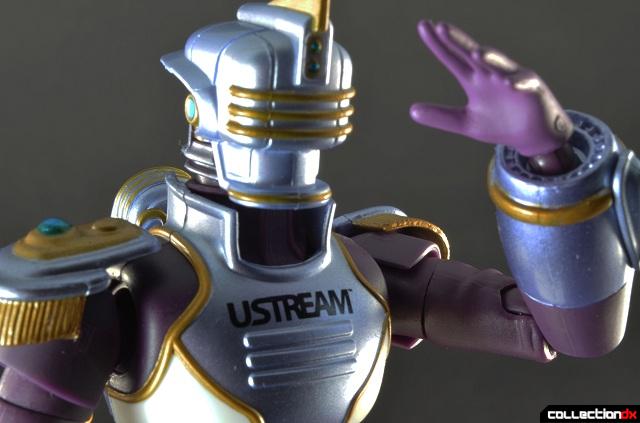 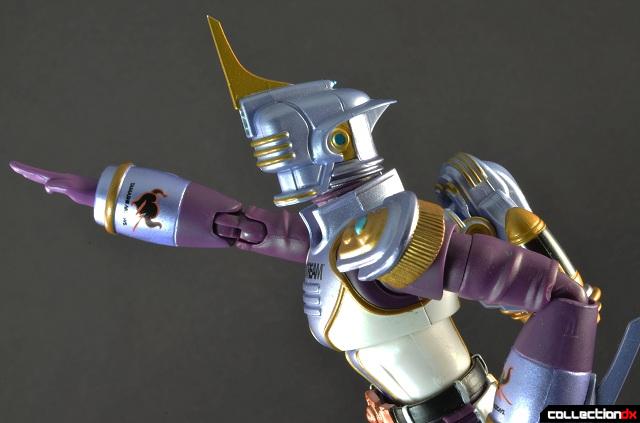 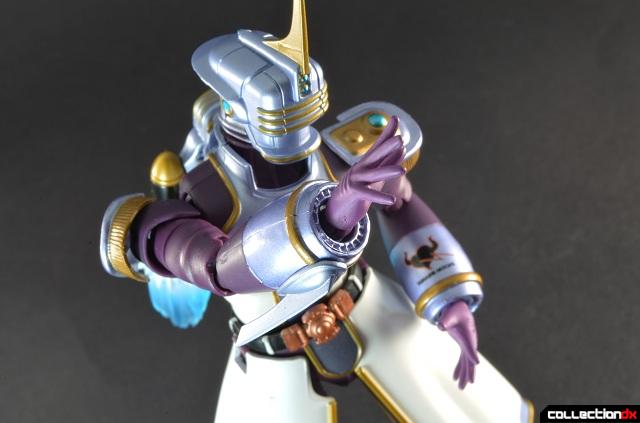 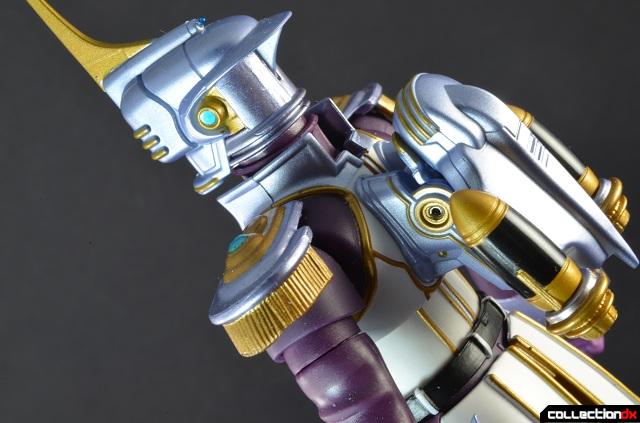 Articulation points worth noting iinclude the fact that this figure does have bicep swivels (you gotta appreciate 'em when you get 'em), some swivel action on the jetpack, and the flaps on the coat that lift up. Lifting up the flaps on the coat allows the cowboy-boot clad legs to move, rather just being there to hold up the figure. 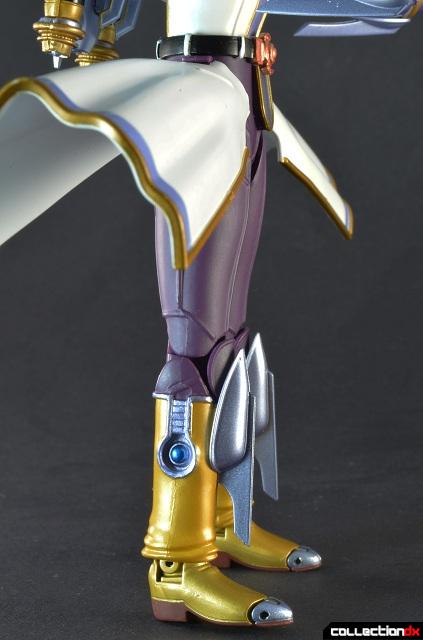 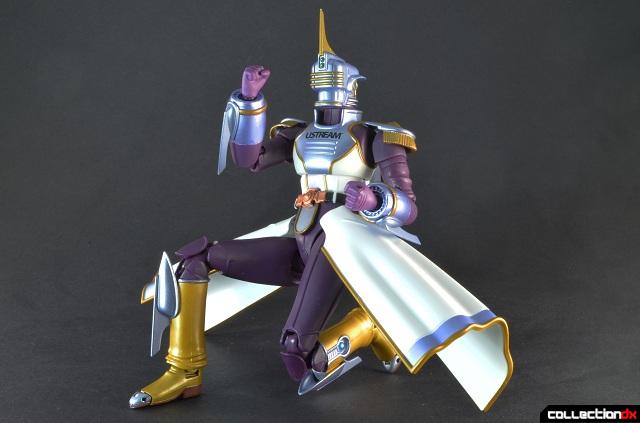 As for extras, Sky High comes with a stand bearing his name and sponsor on the base. 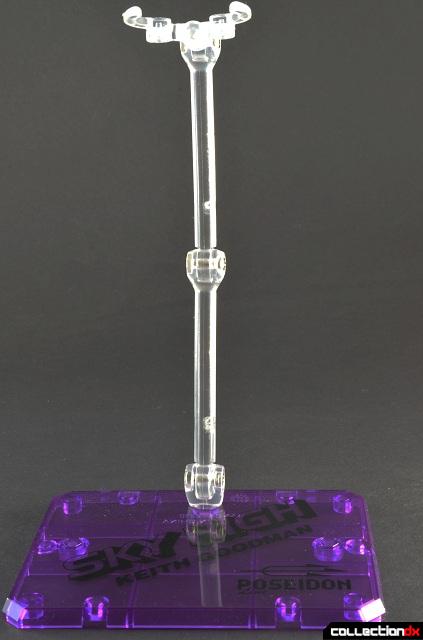 Mr. Goodman comes with two interchangeable faceplates: one with a full horn, the other with a broken horn to represent when it was broken by Jake. 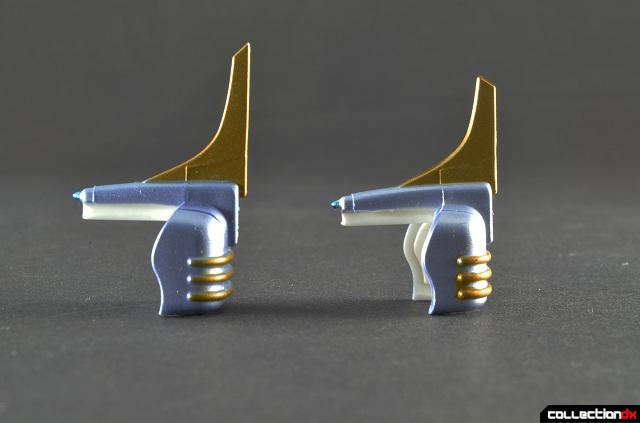 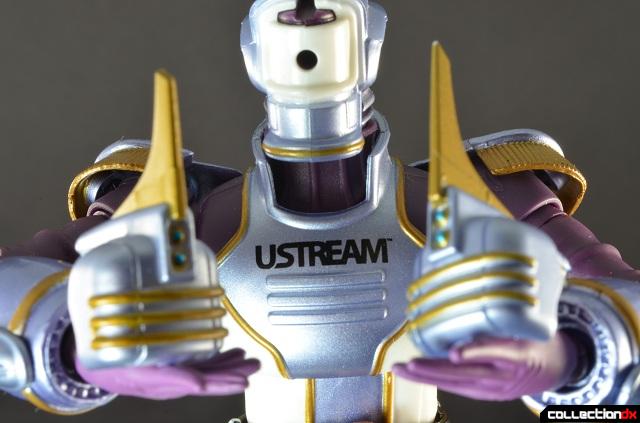 Let’s wait a minute as Sky High puts on his face. 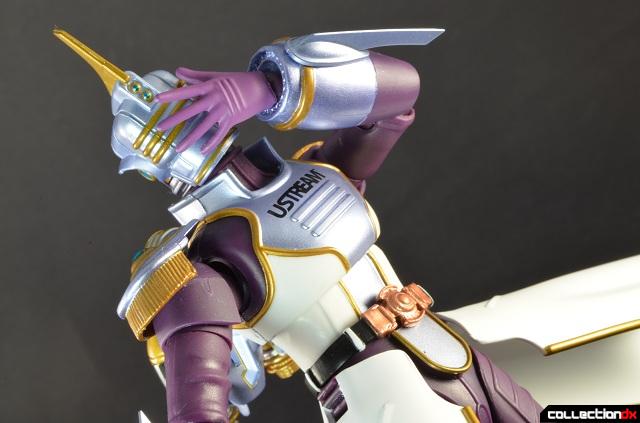 Ok. There we are! Now let’s get back to the review. To go along with the broken horn on one of the faceplates, Bandai has included the rest of the horn on a plastic tree. 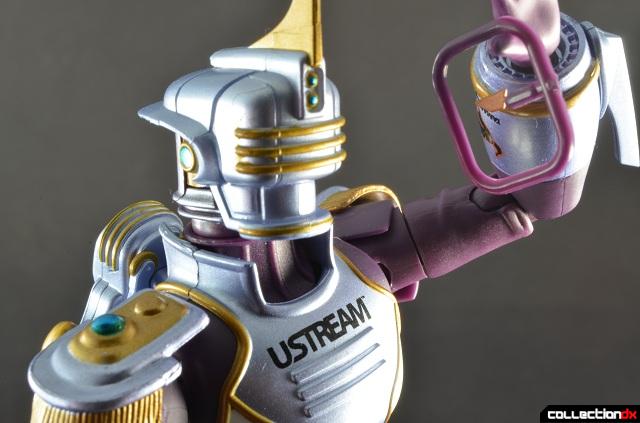 Since I know there would be no way humanly possible for me not to lose the horn tip if I took it off the tree, and because I saw no use for it, I kept it safe in the grasp of its plastic runner.

Another extra that comes packed with this Hero is the extra nozzles for the jetpack that have flame effect parts. 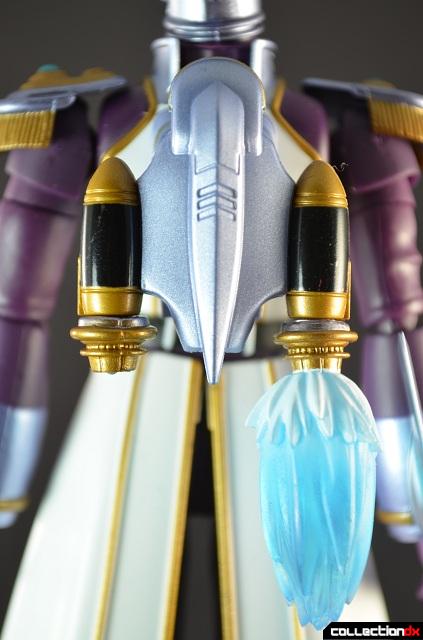 This allows for some great aerial action to happen with Sky High. 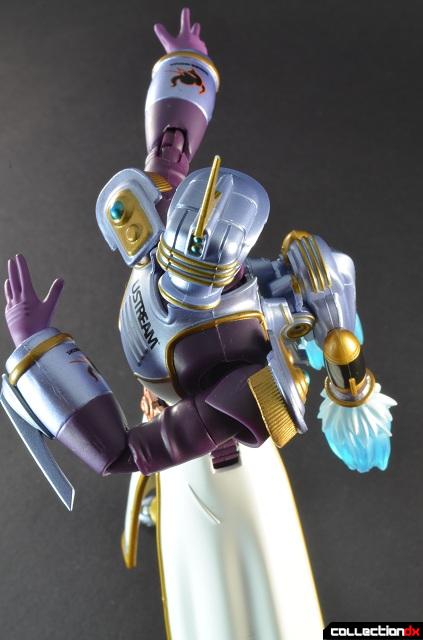 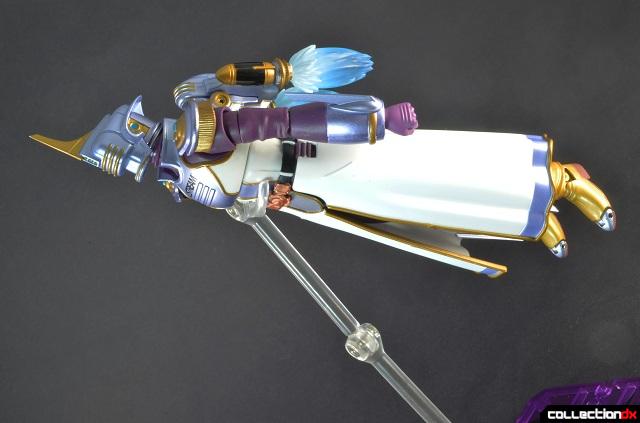 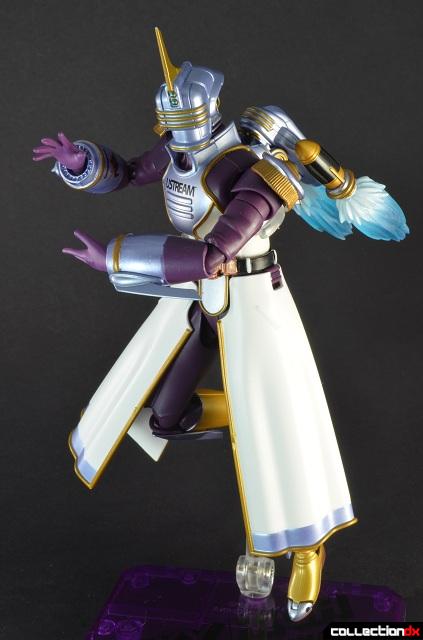 Since Sky High's NEXTer power is wind manipulation, you are going to have to use your imagination for his attacks as Bandai did not include any effect parts to mimick his special abilities. 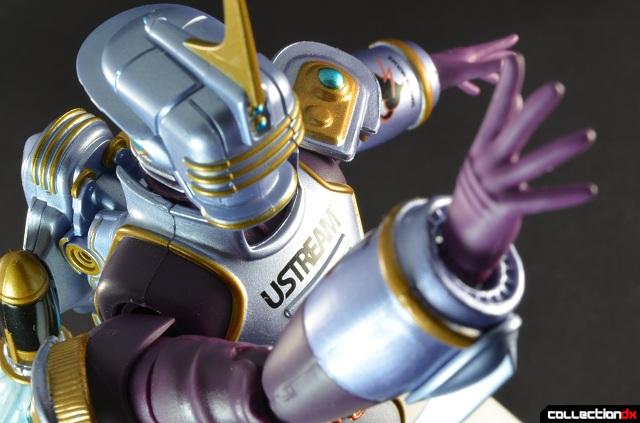 To be honest, Sky High is one of my least favorite characters in Tiger and Bunny. I always found him to be an extremely two-dimensional character. While other characters in the show grew to some degree, Sky High began the show as the goody-goody hero and ended in the same manner. While I am not a big fan of Sky High, I decided to pick this guy up, in case I get the itch to buy the whole cast from the show at some point. Speaking of which, where the heck is Blue Rose!?  Bandai has kept pretty quiet about her... Anyway, back to the review.

In closing, to those who are reading this review, I just want to say: 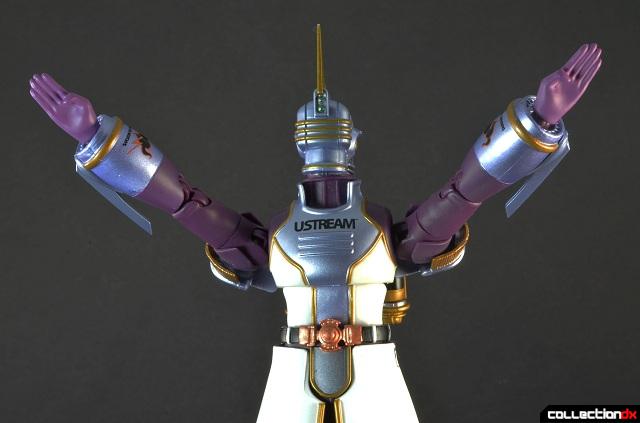 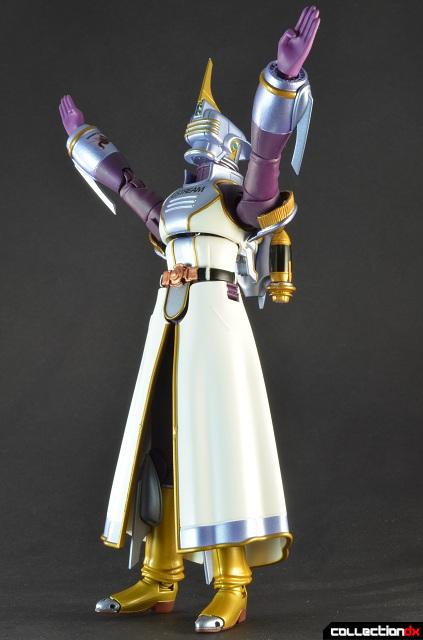