Kamen Rider Kaixa was a secondary Rider from the 2003 show Kamen Rider 555 (Faiz). Kaixa is a character that I have strong feelings for; however, those feelings are all negative because I hate him. I hate his character and I hate his BIG FAT STUPID FACE. Kaixa is probably one of my least favorite Kamen Riders, on account of the fact that I HATE HIM. He's such a Jerky McJerkface. So when I saw that Bandai added his character to their SIC Kiwami Tamashii line I couldn't care less.

Then they released his bike. Man, that's a sweet, sweet bike. 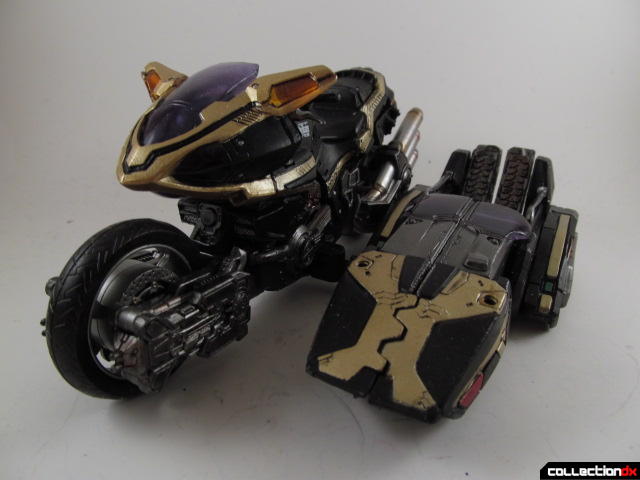 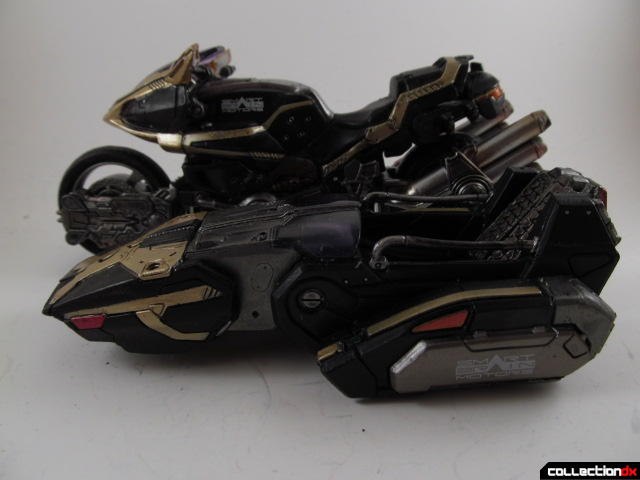 So here it is! Kaixa's awesome motorcycle, the Side Basshar! The SIC Kiwami Tamashii line is a toyline that features the designs of Bandai's Super Imaginative Chogokin line of action figures, but scaled down by one half! The figures are around 4 inches tall, or slightly taller than G.I. Joes. Despite the height difference, they retain amazing sculpts that are super deformed, or imaginative, if you will. 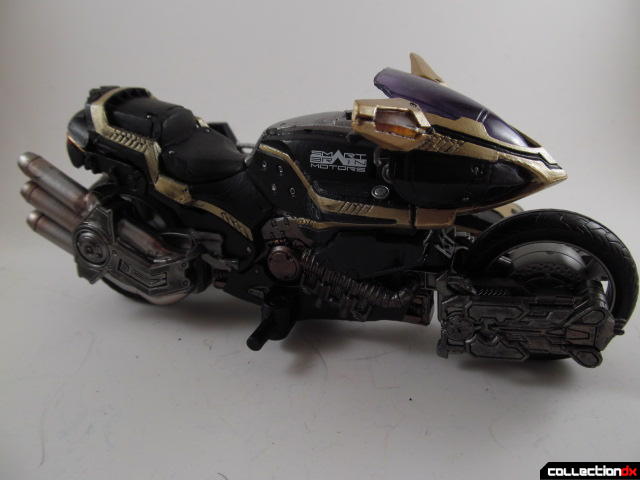 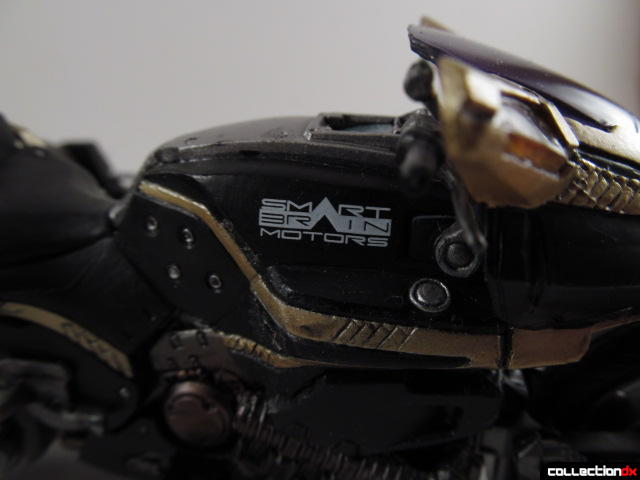 It looks really nice with an SIC Kiwami Tamashii Rider riding it. 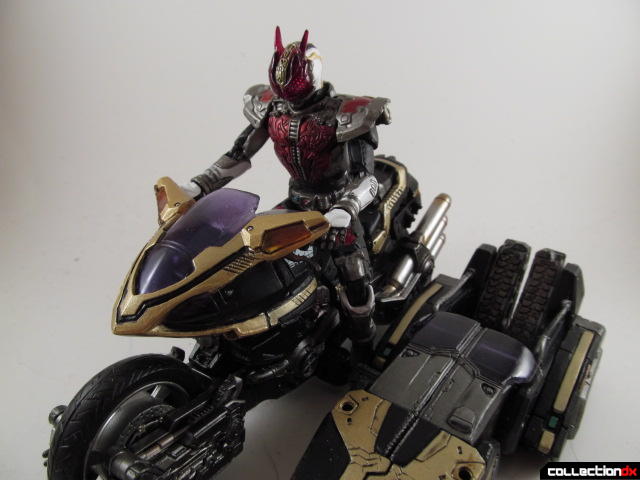 The Side Basshar is really cool-looking. It looks pretty much like it did in the show, except that it's been modified and slightly distorted to give it a grungy, burning metallic look and I totally dig it. So, what we have here is a normal motorcycle with a sidecar.

There's not much else to look at so- 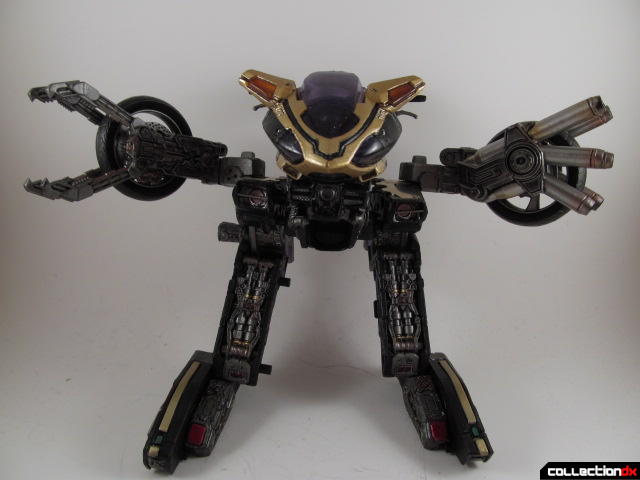 HOLY GARBAGE PAILS IT'S A ROBOT.

Yes, this thing totally transforms into a mech so your Kamen Rider of choice can RAIN DOWN DEATH FROM ABOVE/SLIGHTLY ELEVATED (hopefully not Kaixa because he's a douche) . 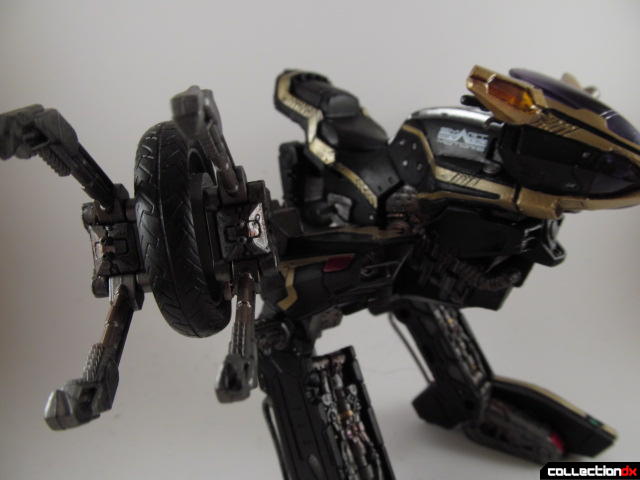 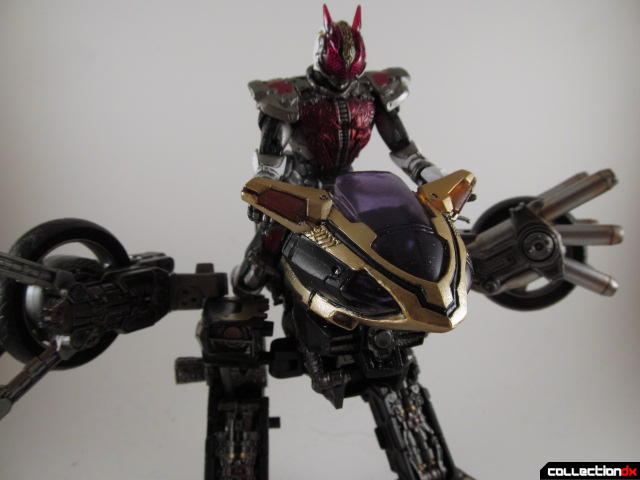 The transformation is nothing to write home about, as it requires quite a bit of parts-forming. You remove the wheels and slap them onto the legs, which are made out of the sidecar. Still, it is pretty satisfying since it looks great in either mode. Plus, it kinda looks like a chicken who needs a hug. 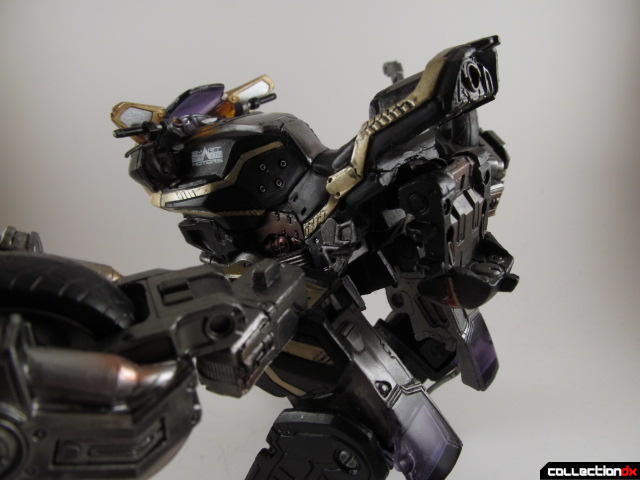 GIVE ME THE HUG. You have 30 seconds to comply. 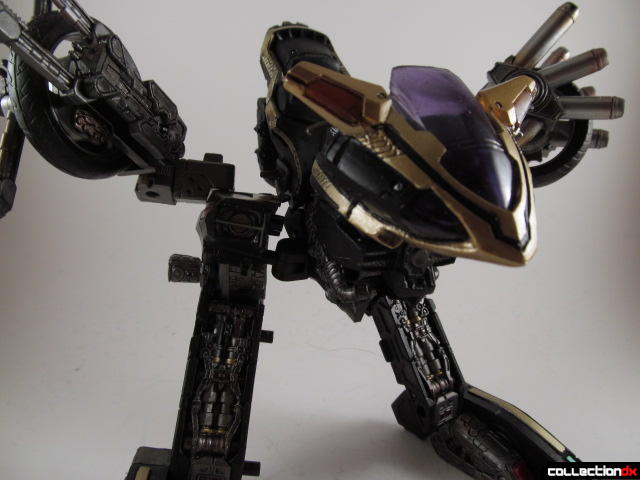 The articulation in Mech-Mode isn't really anything special. It has elbows and shoulder joints, although the shoulders are attached at the hips. The hips have a great range of movement, but it's hindered by the ankles since they are locked in place. However, I didn't see that as such a big deal since it looks SUPER AWESOME just standing there. Plus, the claws are articulated so you can grab a fool whenever you want. 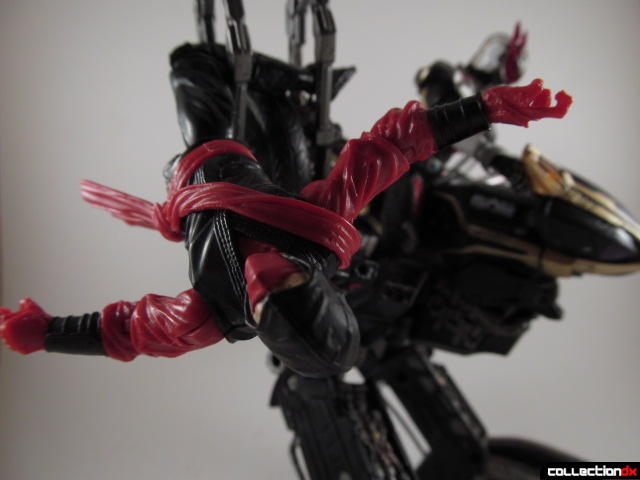 I should also note that this is a great vehicle even if you don't have any SIC Kiwami Tamashii's. G.I. Joe figures (and other 3 3/4" equivalents) look great on it! 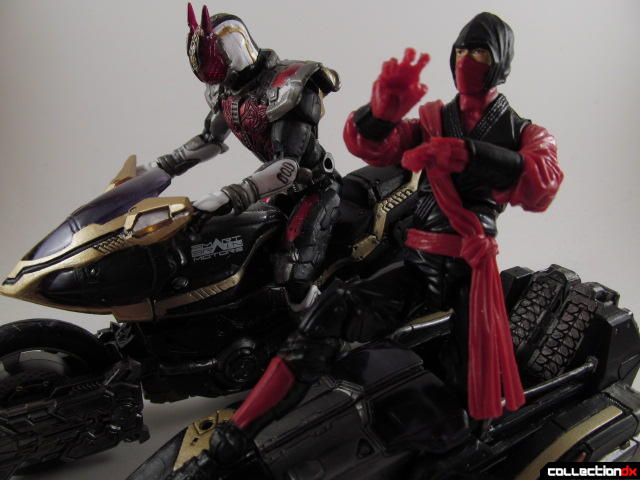 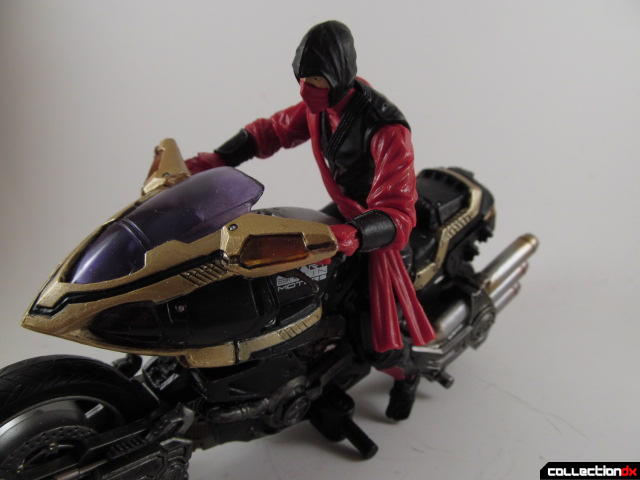 The price point may be tough to swallow for some, coming in around $30-40 USD before shipping, but I feel that price is worth it. The box is collector friendly and the bike looks and feels amazing. Any robot or motorcycle fan should consider checking one of these bad boys out, and a fan of the SIC Kiwami Tamashii line HAS to own this piece. 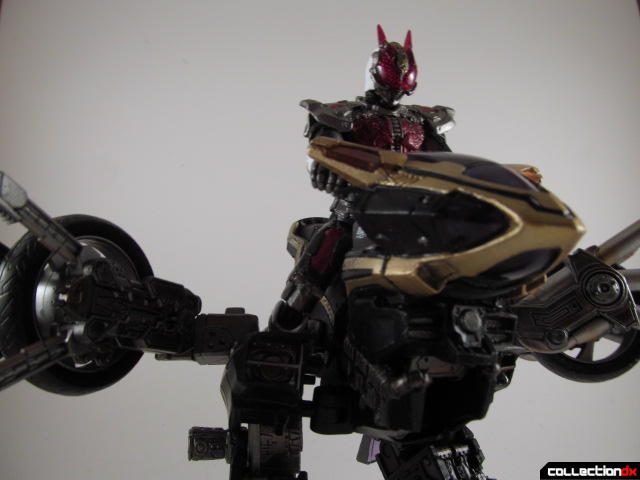 You know? I haven't really thought about it... But if I had to make a decision, I would probably say "No. I don't think I like him very much." I don't know. I haven't made up my mind or anything.

I am sure there is some sort of misunderstanding. I heard the one you have to watch out for is a guy named Takumi. You can't trust Kamen Rider Faiz.

Personally, I LOVE Kaixa. He's such a douchewad jerkfaced BASTARD. And I absolutely love that about him. He's one of my fave Riders.

This is our man Basshar.