In G1 lore, rumble was one of the cassettes that ejected out of Soundwave. Of course, audio cassettes have little use in today’s market aside from being ironic decorations on T-shirts at target. So with Transformers Prime, Rumble comes to us as a “tuner car” 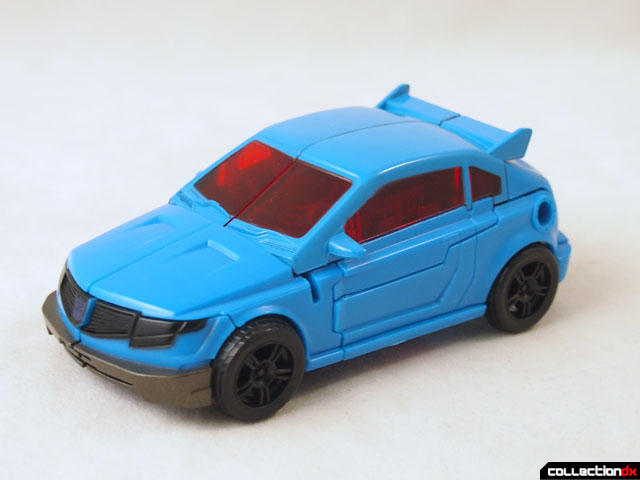 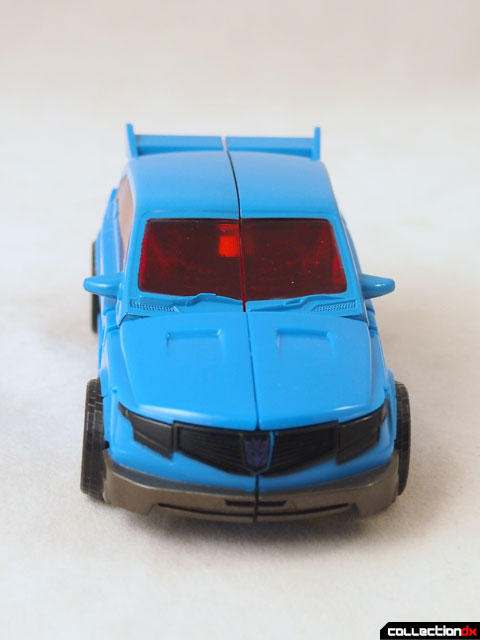 The car is small and not at all flashy, with minimal paint decorations and no decals. The Japanese version of the toy does include decals and an Arms Micron figure instead of the piledrivers. 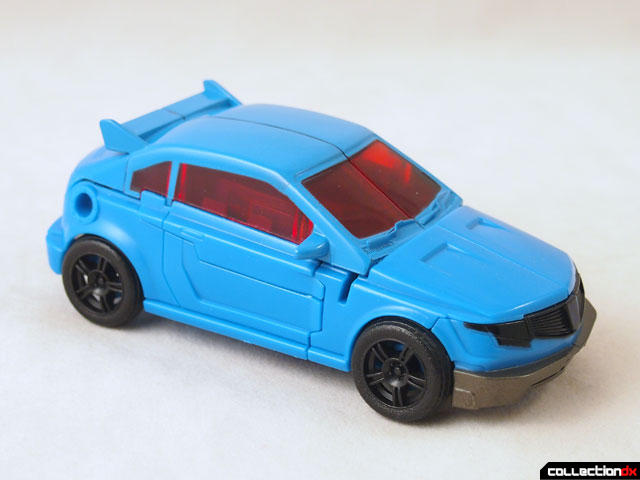 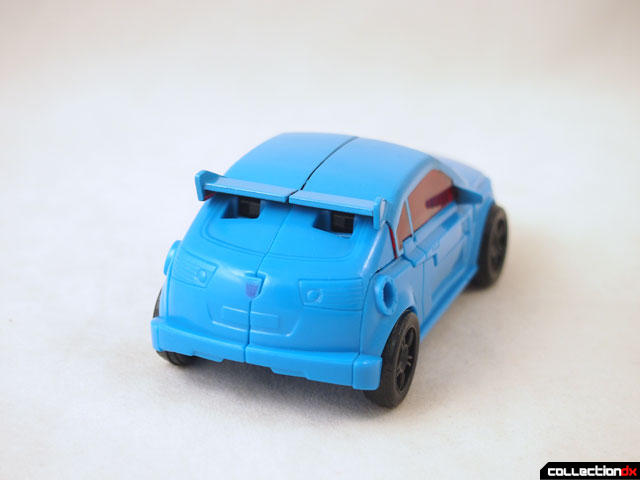 The included piledrivers fit into the 5mm ports on either side in vehicle mode. 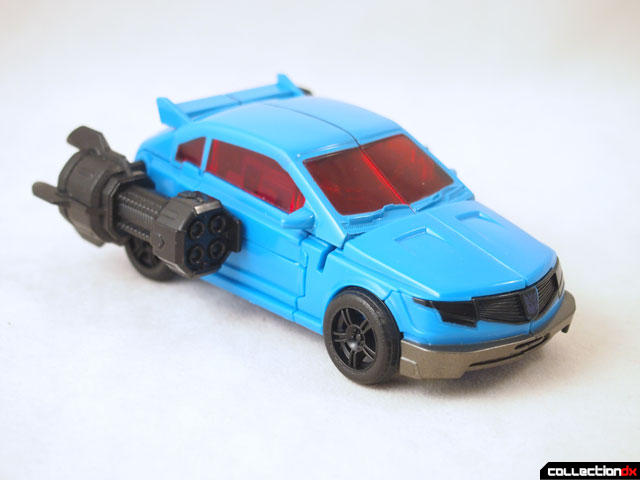 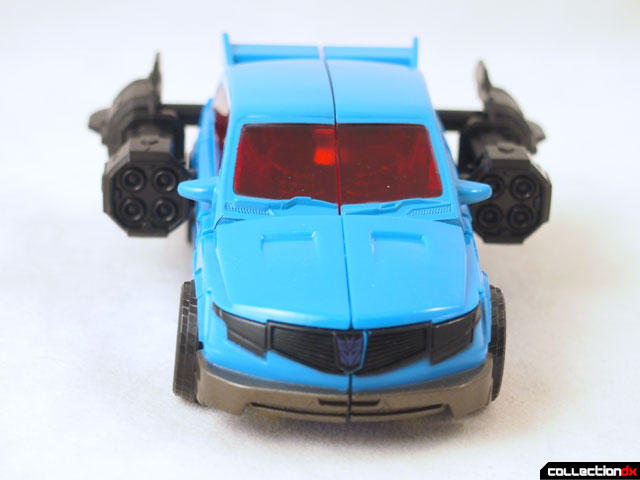 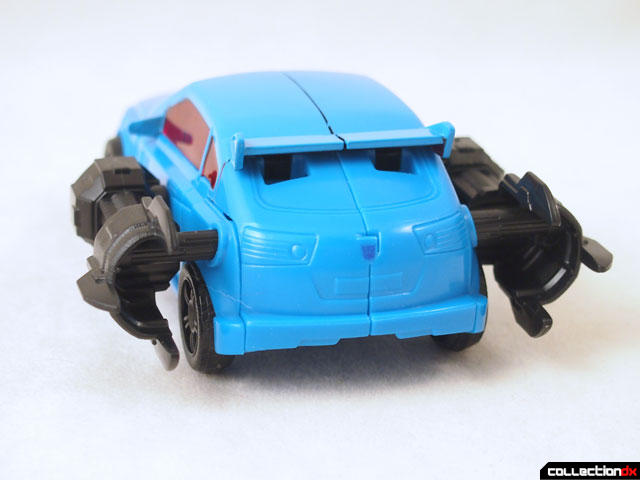 While some toys do a good job of hiding the robot mode on the underside, flip Rumble over and you get a giant robotic skull face. 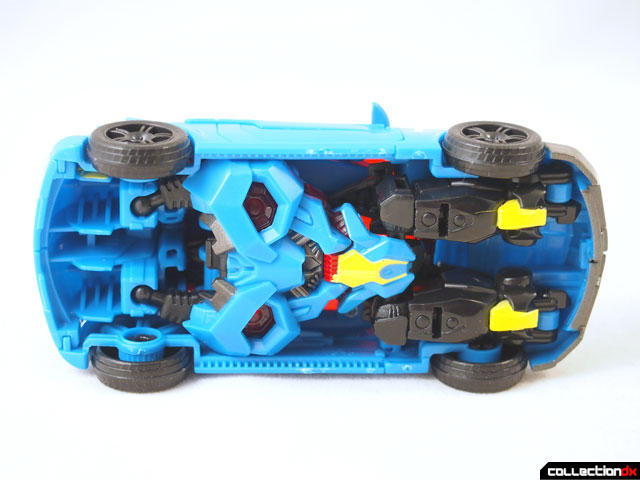 Transformation is simple with a cool flip up head feature. 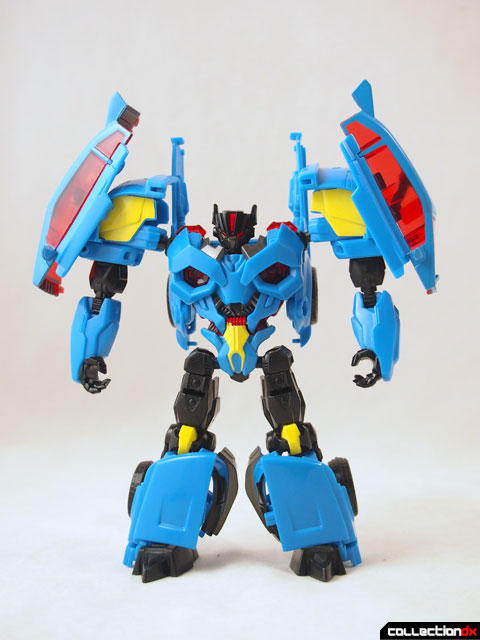 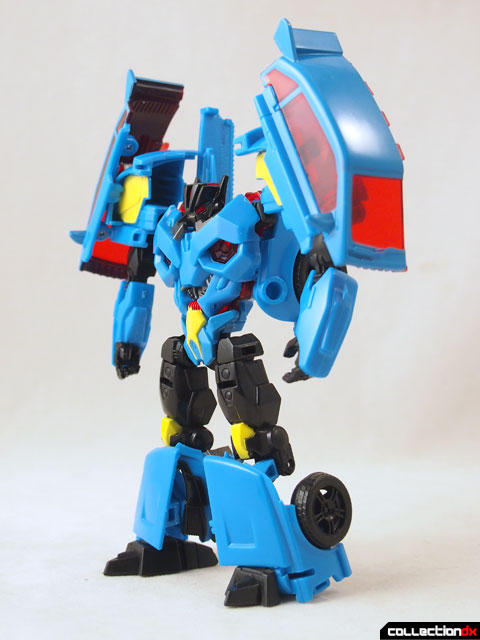 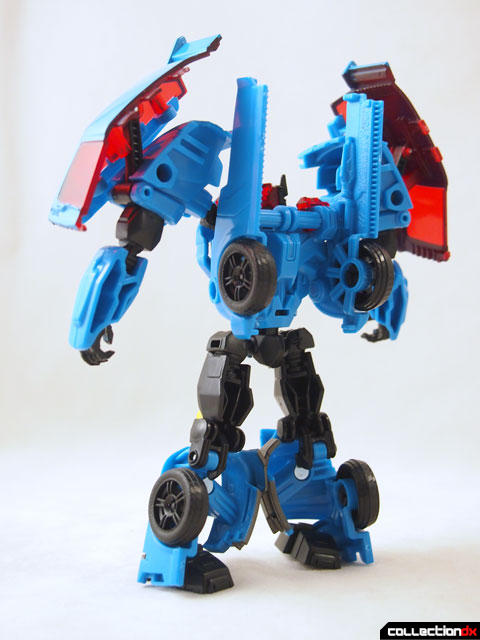 It’s got all your typical points of articulation, but some of that is limited by the design of the shoulders against the big panels on the back. It’s a little top-heavy but not so much you can’t make him stand securely. 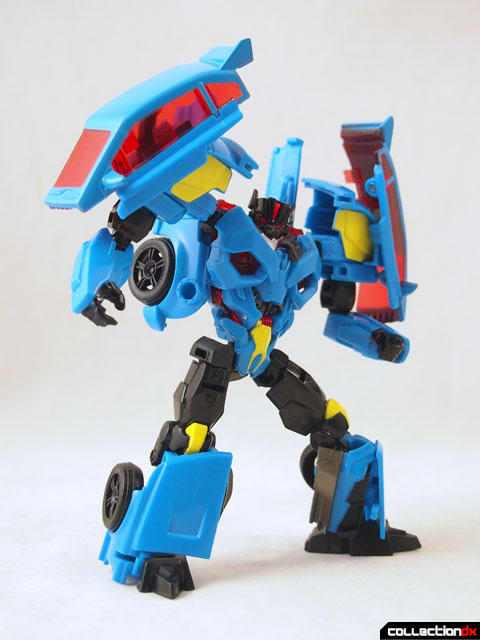 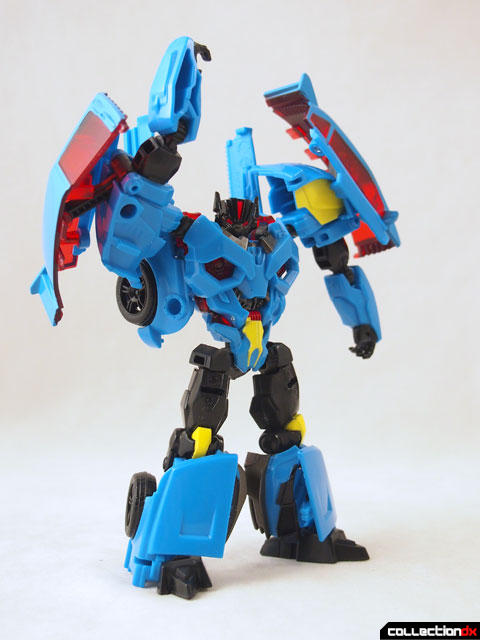 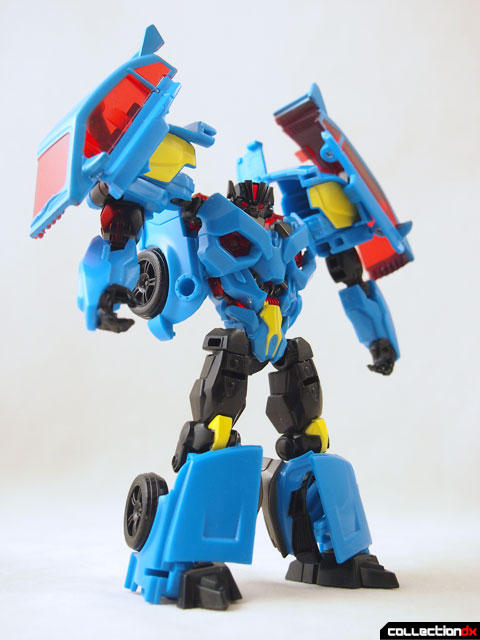 The head has nice light-piping, but in addition, the eyes and sides on the chest also have light-piping. However, the input for the light is on the shoulders so the light effect isn’t very strong. 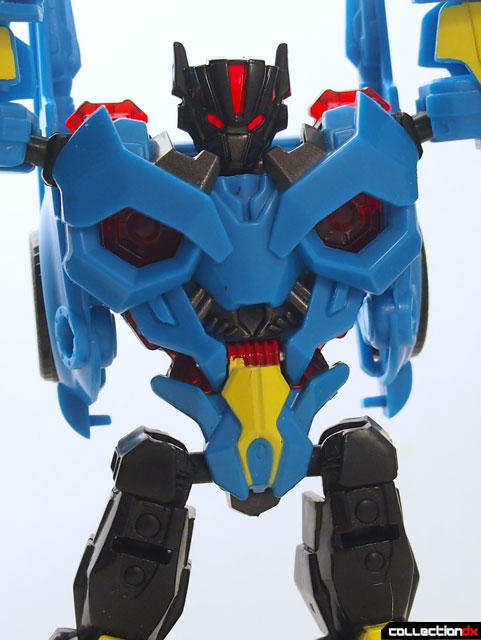 The two piledrivers attach to the hands and are specific to each hand. This is so it appears that they are just extensions of the arms. The hands are part of the forearms and just painted, so there are concerns about paint scratching. There is no wrist articulation. 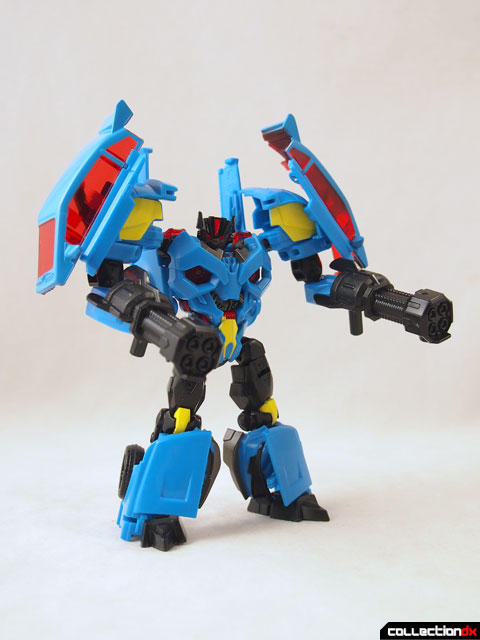 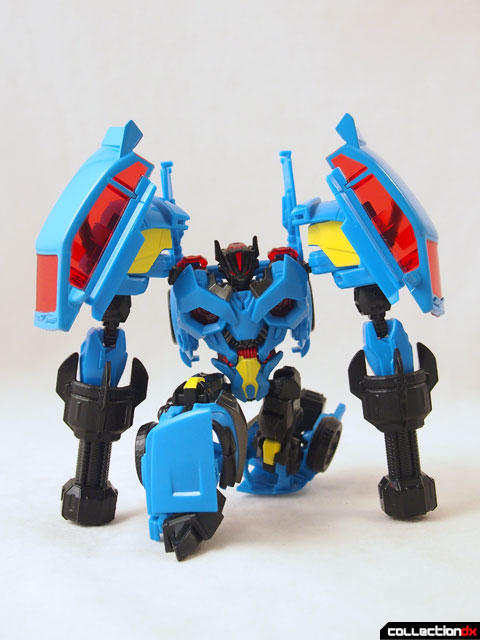 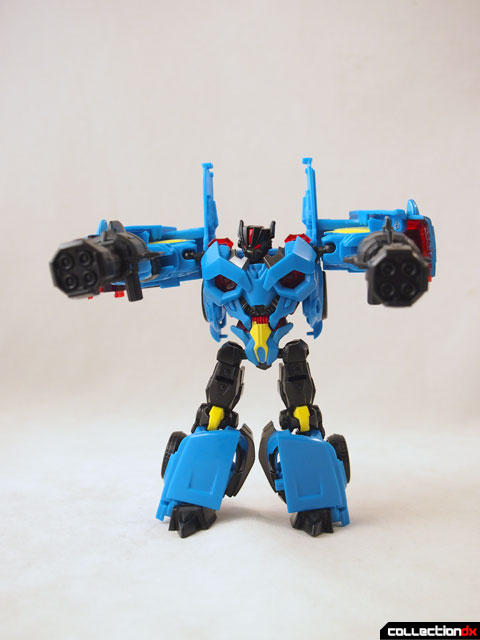 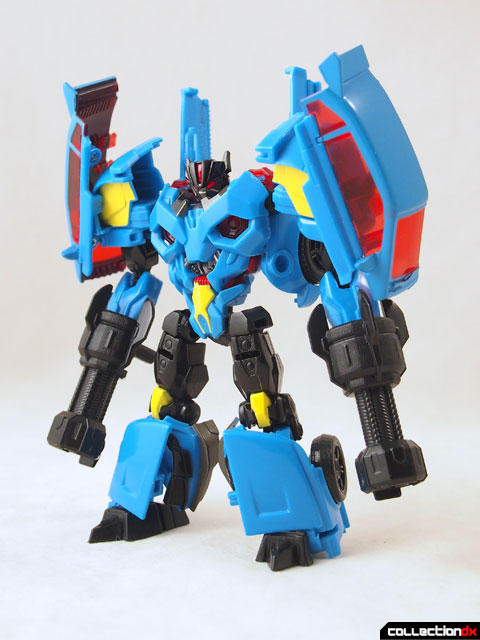 When not in use, the piledrivers can be attached to the back of the shoulders, or on the hips. Each piledriver also has an additional 5mm connector underneath that serves an unknown purpose. 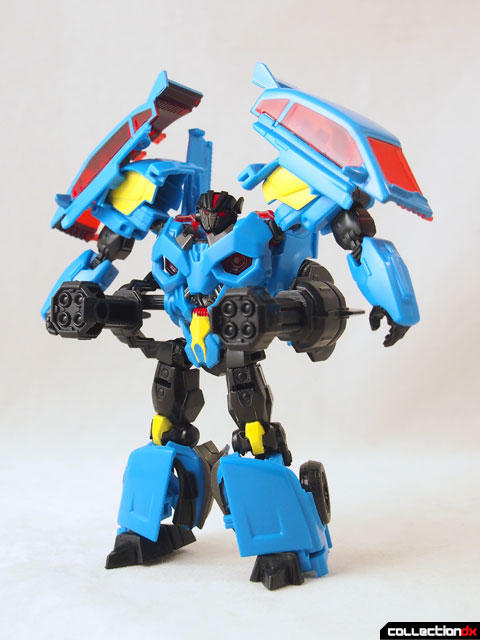 It’s a cool little toy and I won’t lie – I got it because of the skull on the chest. It reminded me of Gaiking or Gurren Lagann.

Transformers Prime Rumble comes packaged with a DVD containing an episode of the cartoon.

In Japan, this toy is recolored red to be more accurate to the G1 color scheme, and the blue repaint is renamed Frenzy.

I really like the look of this one, especially with that skull.
It's been a while since I've bought any newer transformers, but I think I'll pick this up.

I don't dig this toy as-is...but with this set of ReproLabels decals, it looks amazing:

This is a prime figure I actually like. I know the chest is supposed to be reference to a cassette tape, but I only see a Gurren Lagann influence instead.