The trouble with kick ass shows like “Tiger & Bunny” is that I catch myself saying “Oh, he’s one of my favorites!” about nearly every character. I do love Origami Cyclone, aka Ivan. He’s the most introverted of the crew, happy to scuttle along in the background. He’s just a little bit awesome, and certainly loveable. I was pretty psyched to pick up his S.H. Figuarts, especially since I’ve been having so much fun with the rest of the releases in this line.

Here’s Ivan in the box: 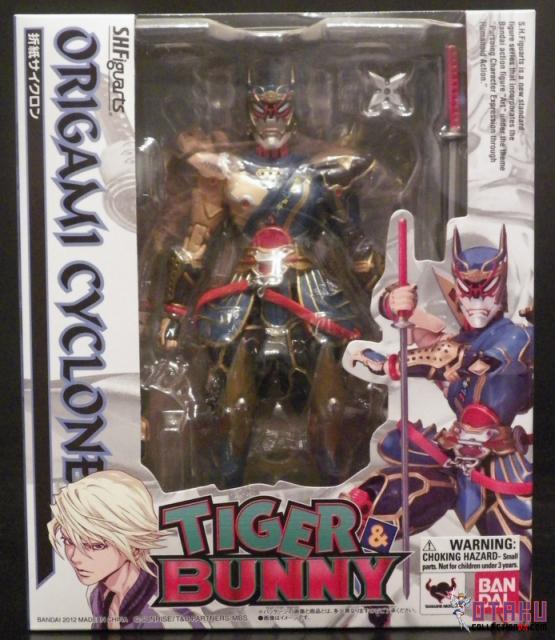 And now the case. He has two, while most of the “T&B” crew only have one. Why does Ivan have two? Because of those giant throwing stars, naturally. 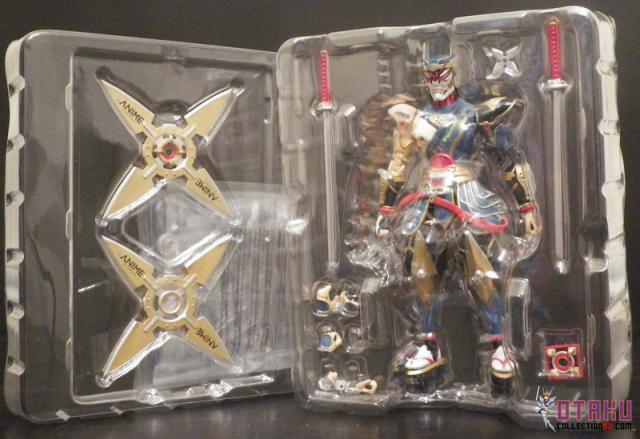 You can also see that he comes with two extra sets of hands, two swords, mounting accessories for those swords, a tiny throwing star and a plate of some kind. We’ll get to those later. Ivan also comes with more instructions than any of the others, which is pretty impressive considering Keith’s giant instruction sheet. 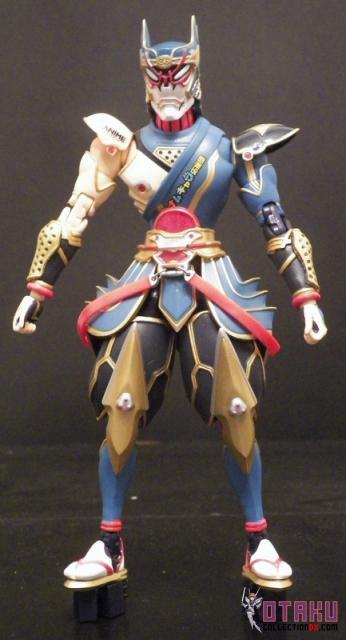 And here’s Origami Cyclone! A few things of note: he has GIANT FREAKING FEET. Normally this would be awesome for free-standing figures, except for his tiny, dainty ankles and tendency to lean back. Free-standing is even more of a challenge for Ivan than it is for Keith.

He’s also got MC Hammer/Sora from “Kingdom Hearts” balloon pants, and some sporty suspenders. Never noticed those bad boys in the anime. His mask, much like Wild Tiger’s, looks a little Kabuki-esque. Also, the flesh-toned armor is… odd.

Let’s look at those giant clodhoppers a little closer, shall we? 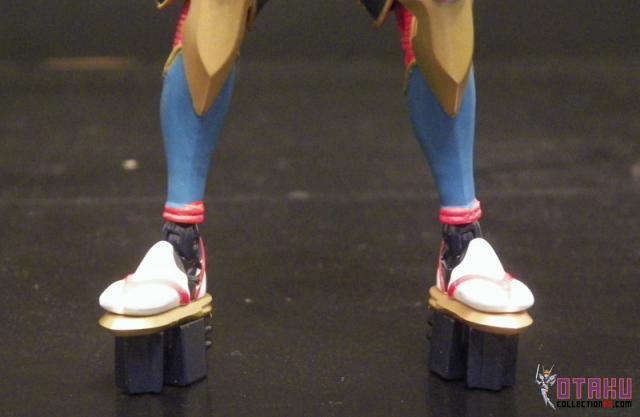 Check the tiny ankle joint. That really could have been planned better. I doubt Blue Rose, whenever she arrives (SOON PLEASE OH GOD OF PVC), will have daintier ankles. 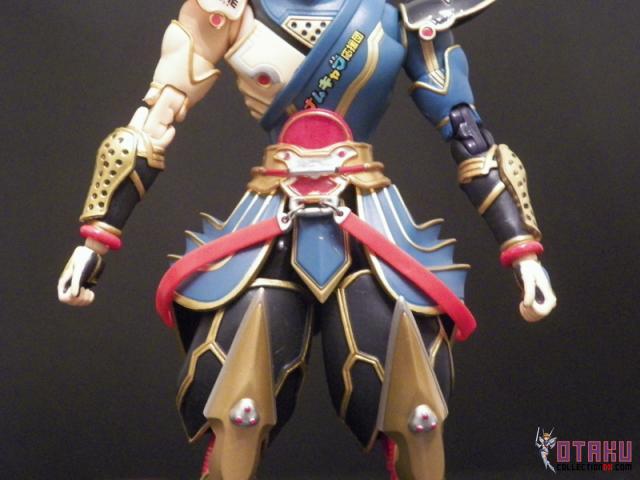 Here’s his midsection, which includes a little bit of corporate sponsorship. Check the suspenders and robotic nipple. Just… odd.

From the side! Look at his caveman-esque posture. He leans back, then forward at the waist. He looks like he’s sulking. 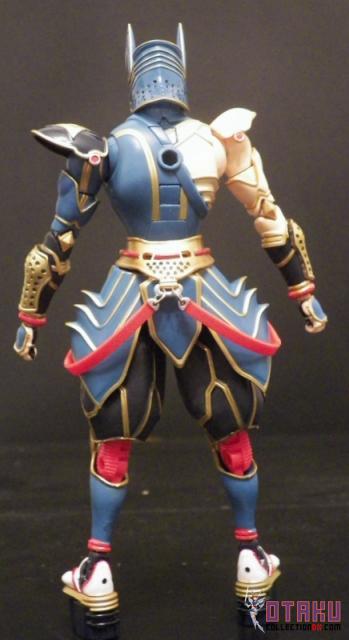 This is Ivan from the back. Not much of note here, save the giant hole in his back. More on that later. 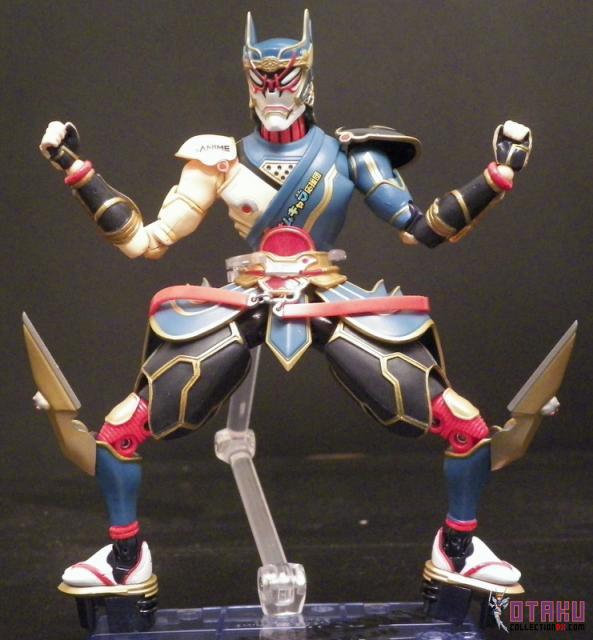 How about some accessories? Ivan has a lot. Let’s kick it off with those katanas. Because who doesn’t love swords? 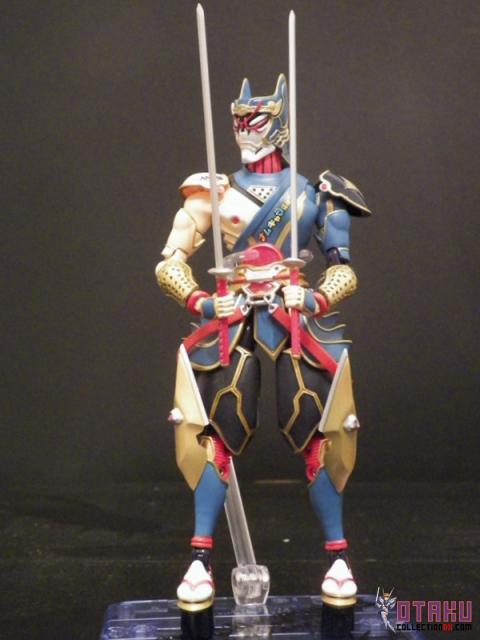 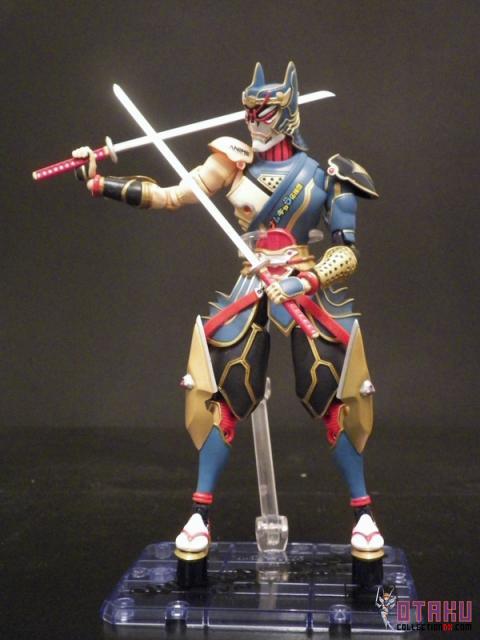 You can holster them, with the help of two tiny little pieces. The swords come apart - the blades pop off the hilts. You then latch the hilts onto these two tiny hinges that snap into his back. From the front: 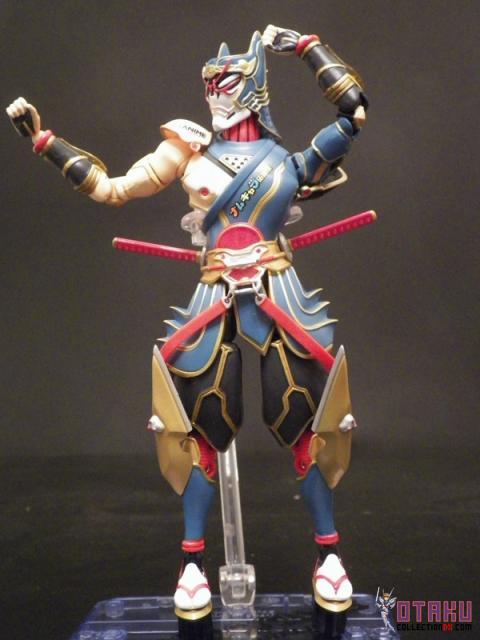 And now the back, so you can see how it works: 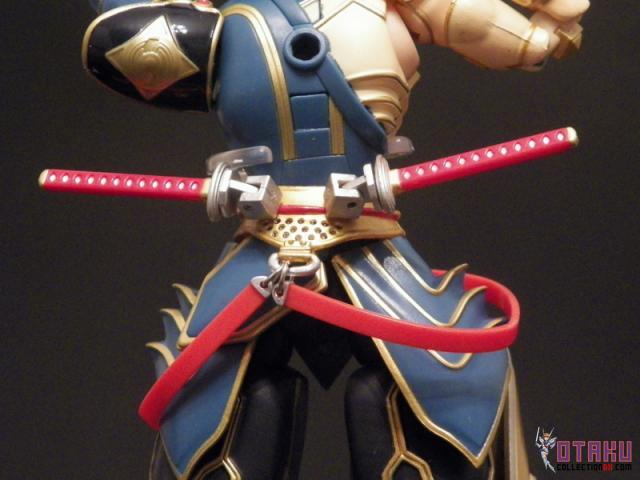 Remember that giant hole? Let’s see what it does. 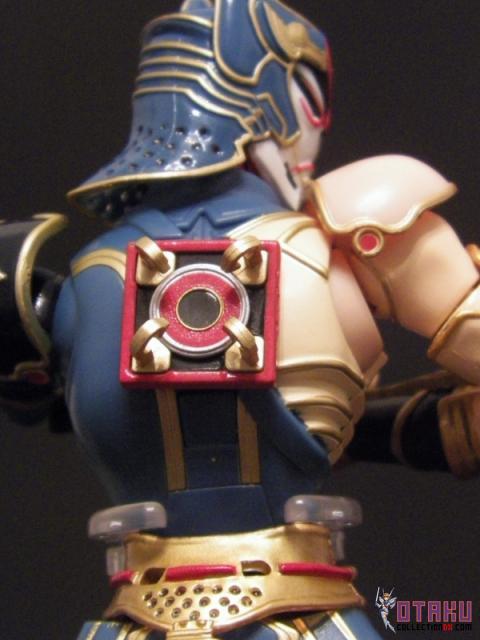 You can pop this plate, which looks like a holster for a giant freaking throwing star, into the hole. Or, if you prefer the throwing star: 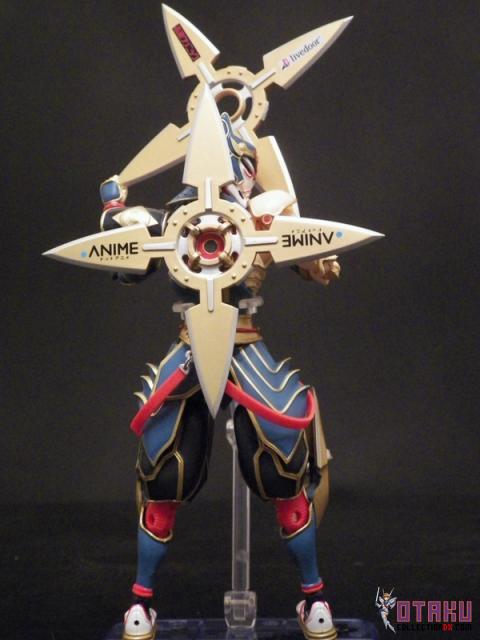 And now a word from our corporate sponsors: 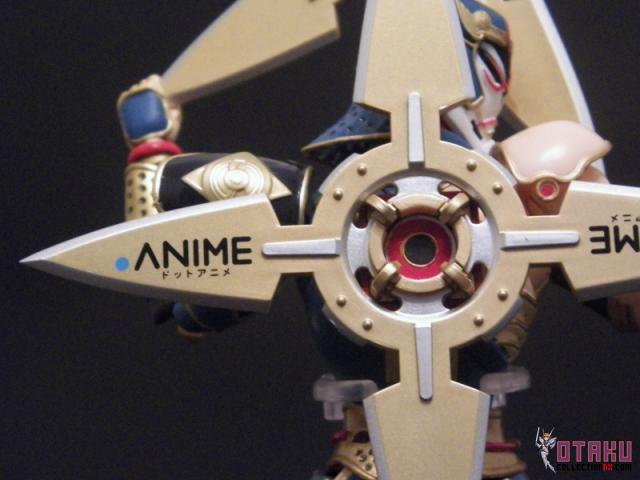 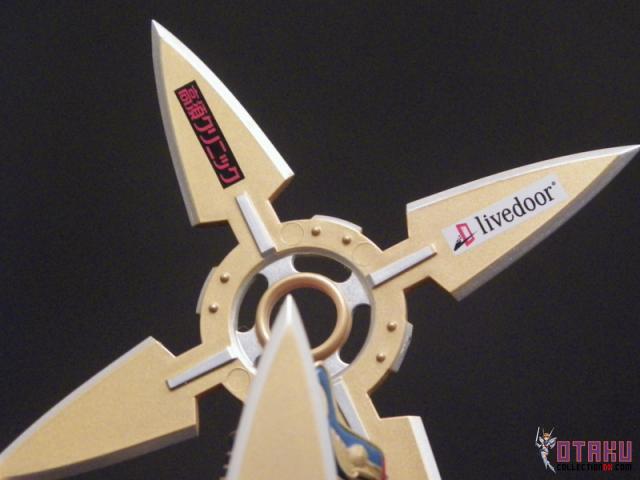 Ivan comes with a tiny throwing star, in case you feel overwhelmed by the big ones. 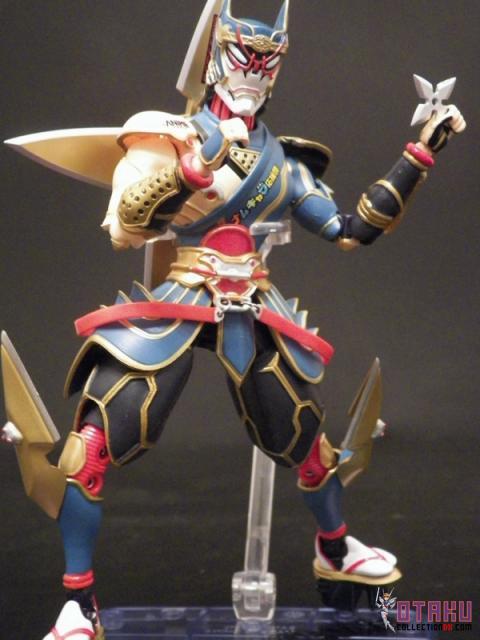 But the big one looks like he really means business, don’t you think? 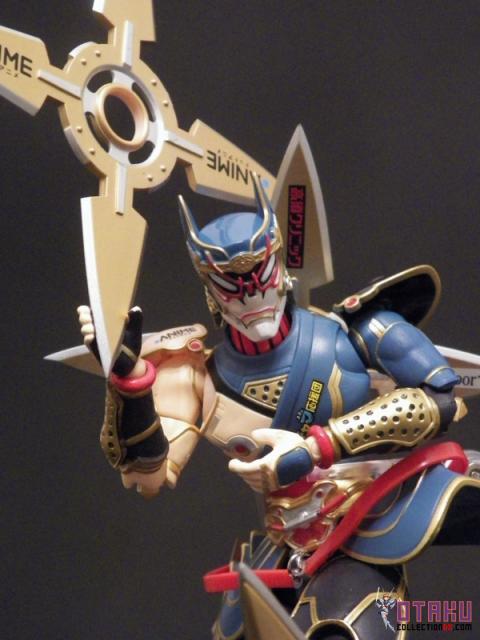 Of course, Origami was never one for the spotlight. 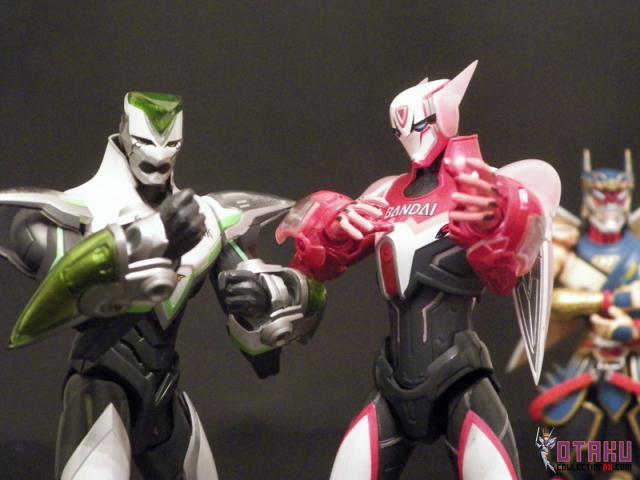 But he is a part of the team, and we love him. 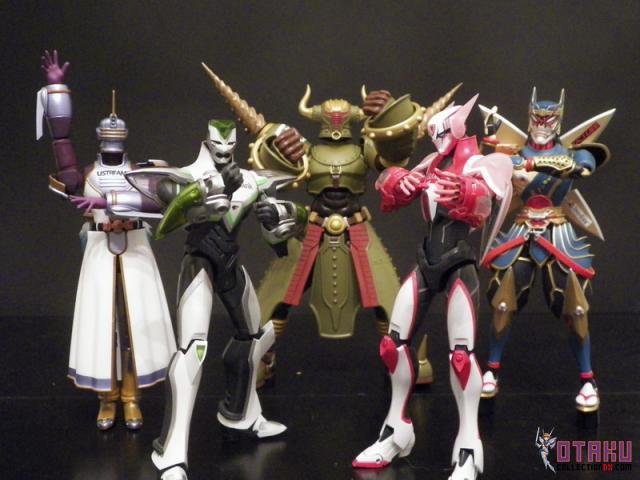 All in all? He’s a bit of a pain to pose, he wobbles when he isn’t falling over, his stand doesn’t support him as well as I’d like and his big stars are a bitch to get to stay in his hand. His figure, as with his persona in the beginning of the series, is merely a part of the team, though that makes him a valuable asset. I do like the character quite a bit; his figure… well, I won’t play with him as much as I will Tiger or Bunny. For this line, Bunny continues to be the best of the figures in terms of ease of poseability.