The Ka Signature sub-line of the Robot Spirits line is an attempt to deliver premium quality figures that retain the function and playability of the Robot Spirits line.  Hajime Katoki is Bandai and Gundam's main man, so he gets his own signature label.  The MSA-005K Guncannon Detector (Guncannon DT) is an obscure design that recently got some screen time, but not enough to get it a spot in the main RS line.  The Guncannon DT first appeared as an MSV (Mobile Suit Variation) design from Mobile Suit Gundam Zeta, and then appeared animated in MSG Unicorn. 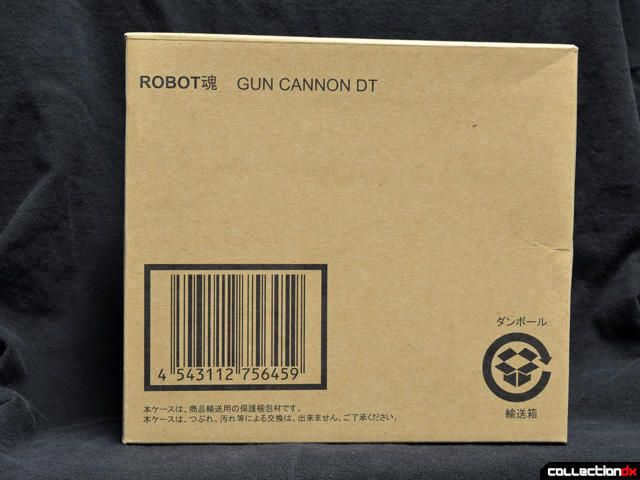 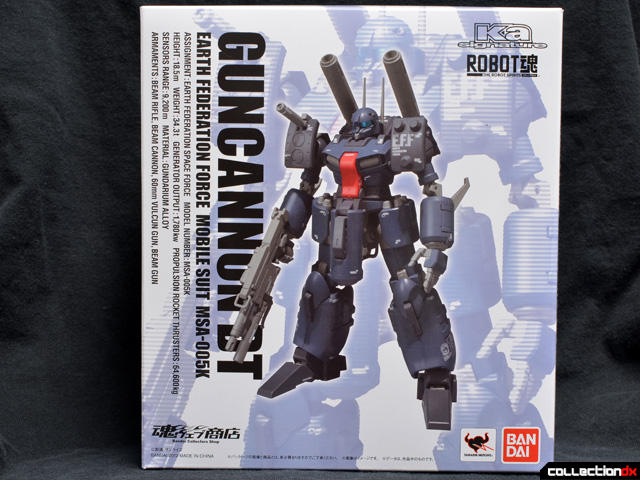 The actual box of the DT features decent graphics, but lacks the window of the regular Robot Spirits packaging.  The presentation is a bit classier, but the box is still the same flimsy cardboard as the regular releases with regular old vacuum formed trays inside.  Also note all of those beautiful Katoki markings and decals on the figure. 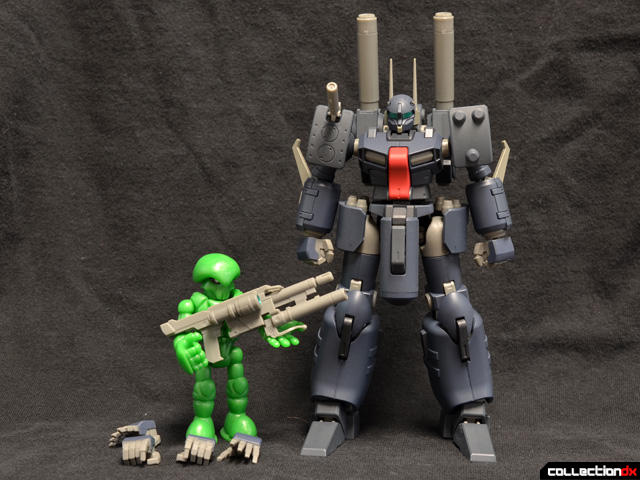 Out of the box, it is immediately apparent something is missing. 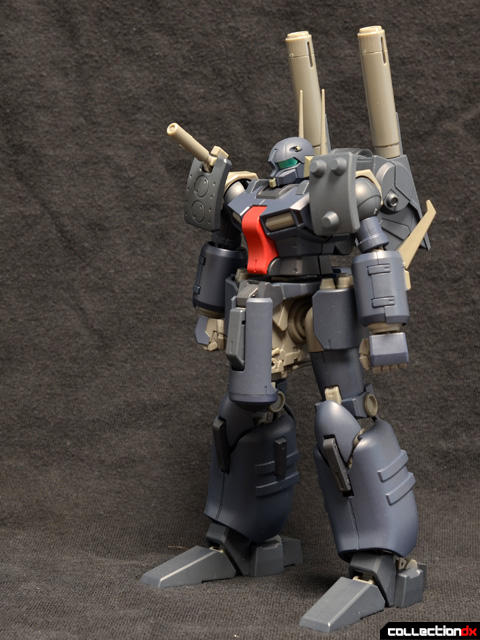 Like the previously released Ka Signature RX-160S Byarlant Custom, also from Unicorn, the markings are stickers.  Unlike the Byarlant, the Guncannon DT does not actually come with its sticker sheet.  Apparently there was some delay with the sticker sheets, so the figures were shipped out without them.  I contacted the store I bought mine from, and they said they would forward me the sticker sheet when Bandai gets around to shipping it.  That was a few weeks ago, and still no word. 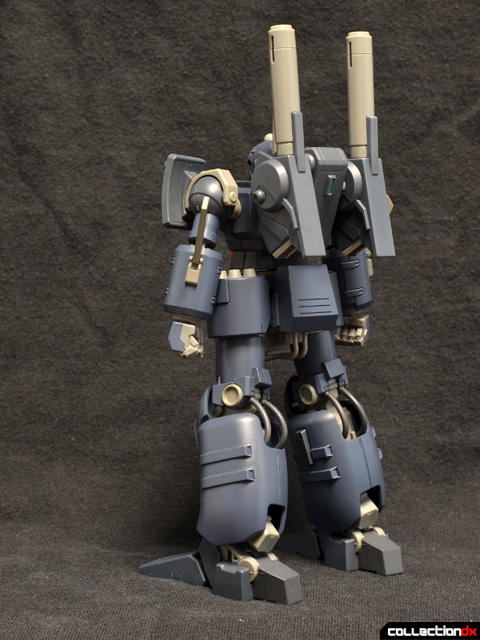 Without the Katoki markings to break things up, the DT consists of large, unbroken swaths of tacticool blue-gray. 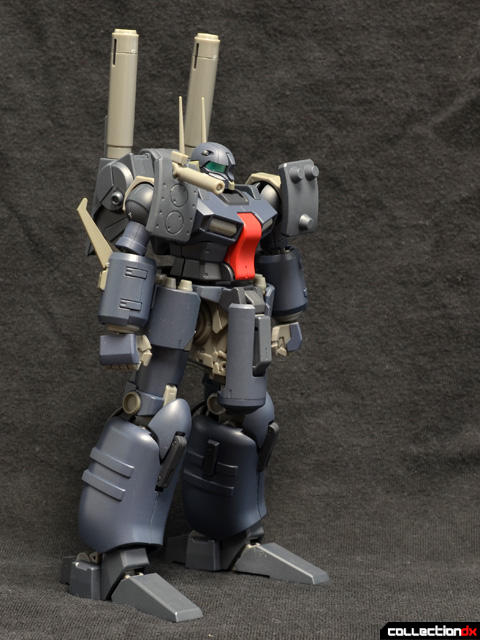 The sculpt is sharp and striking, but the deco most certainly is not.  Everything's one or two shades of medium Robot Gray or two shades of blue, with just the red cockpit cover and painted green eyes for detail. 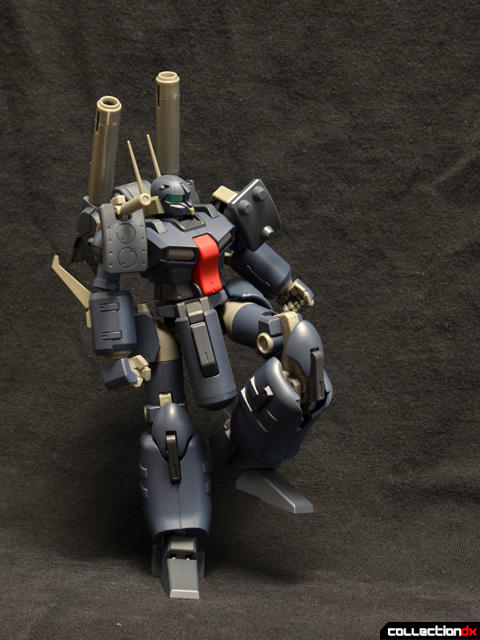 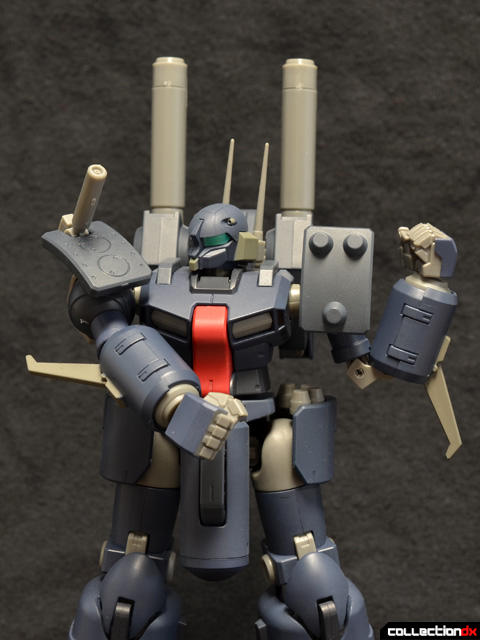 The DT is impressively solid to offset its blandness.  As with all Robot Spirits releases, everything moves as it should with an impressive range of motion.  The elbows even have a  pull-out joint, Mazinger-Z-style. 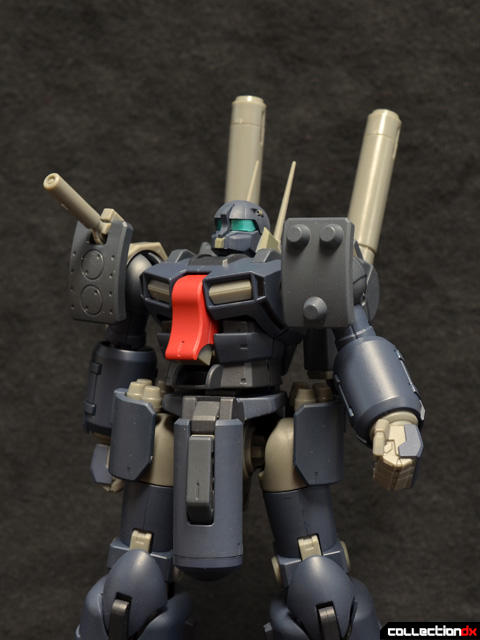 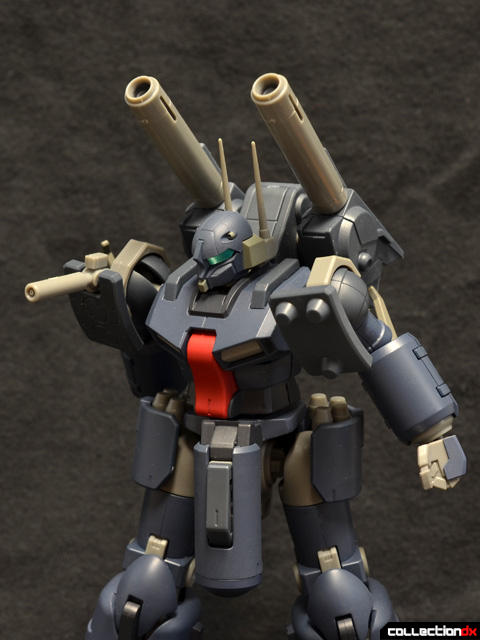 The shoulders and torso feature commendable movement, although the shoulders are hindered in some poses by those armor plates. 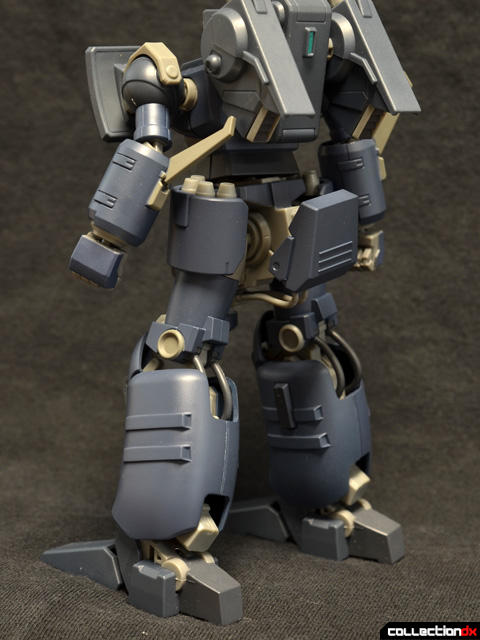 The back of the knees feature soft plastic hoses that move with the double joint and feel pretty durable.  While I am disappointed by the lack of decals and overall blandness, the figure certainly is sharp and detailed.  Also pictured is how the butt plate came off and had to be reglued. 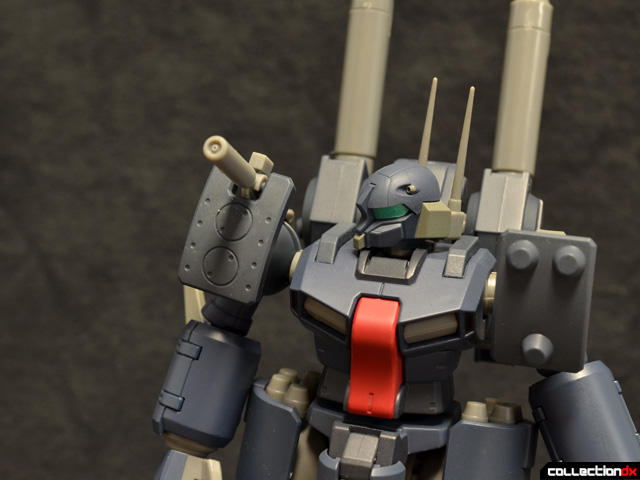 The burly slabs of shoulder armor move so they are not always totally in the way, and the little cannon also elevates. 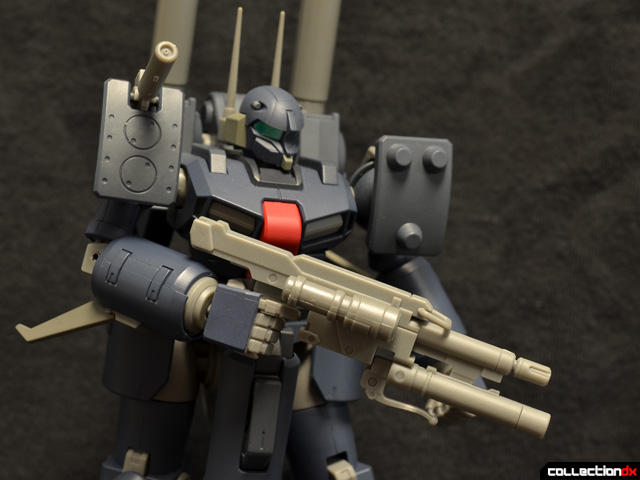 The DT comes with three flavors of hands and one accessory, its supertacticool beam rifle gun thing.  It's got a scope on the side that it can't look through and an underslung grenade launcher-looking thing.  It's even got a movable chain link on the front as if for a shoulder strap, so you know it's serious.  There's also a stand adaptor.  It also came with that little handle-like protrusion on the bottom bent in the box with a big stress mark, so, there's that. 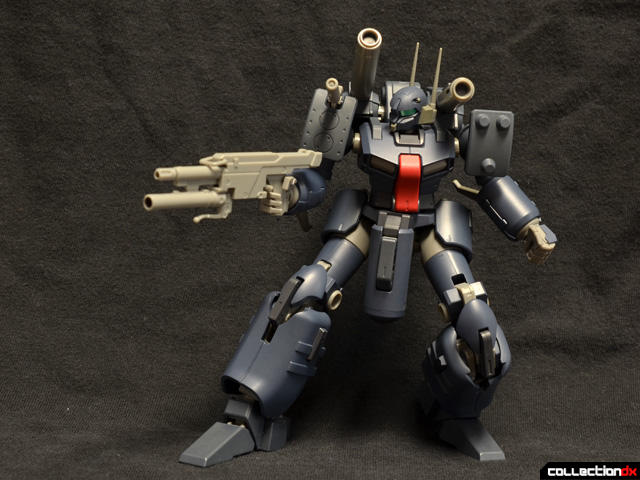 With those big honking shoulder cannons and that sweet, sweet hand cannon, the DT does look good in motion. 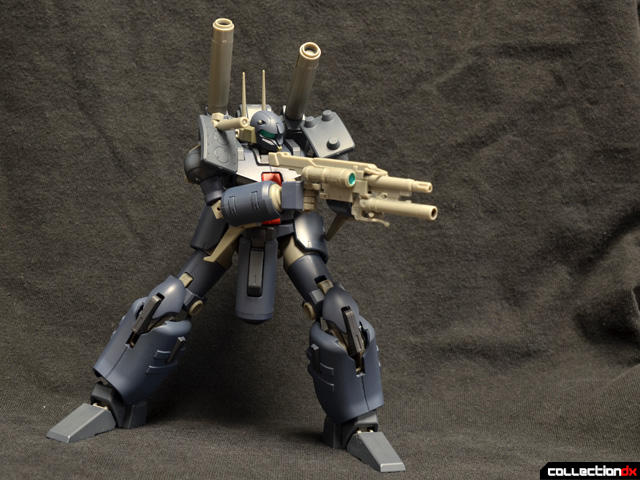 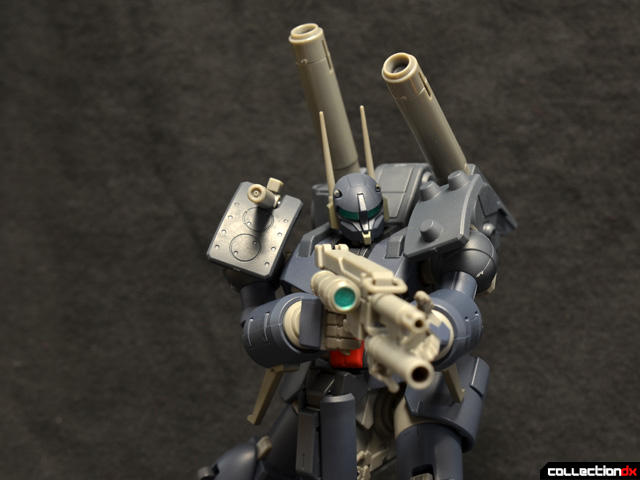 The Guncannon DT is angular and modern, but still retains hints of the goofy, heroic Guncannon from the original Mobile Suit Gundam.  I'm still not totally sold on those shoulder panels or the elbow spikes, but overall I think the design works. 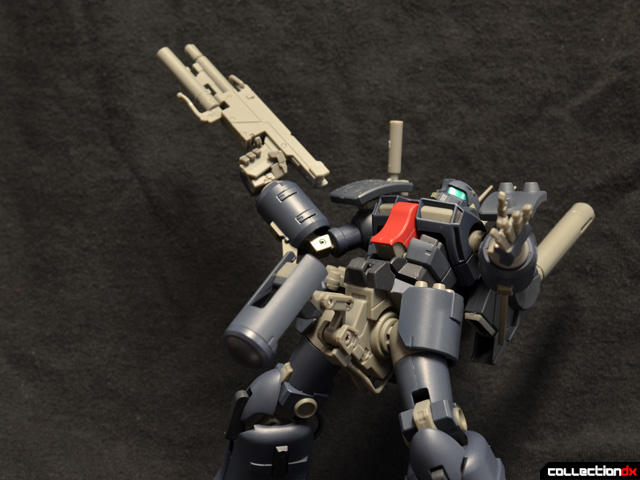 The Guncannon DT also includes an extra feature that differentiates it from its predecessor... an exploding crotch! 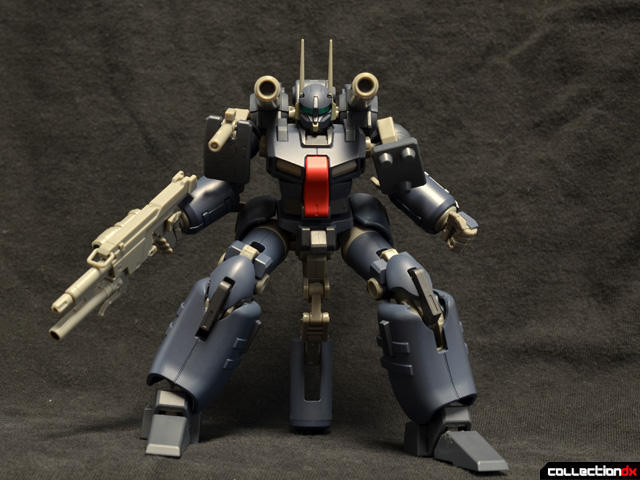 Actually, the codpiece folds out and deploys as a tripod stand for some serious cannon firing squatting pose action, I can only assume at least partially inspired by the Destroid Monster from Macross. 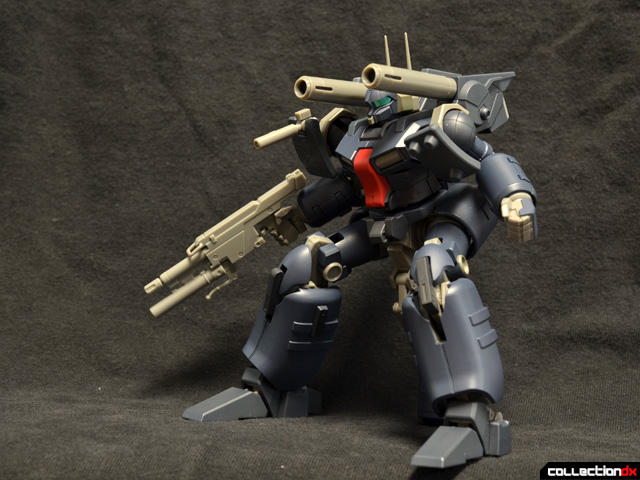 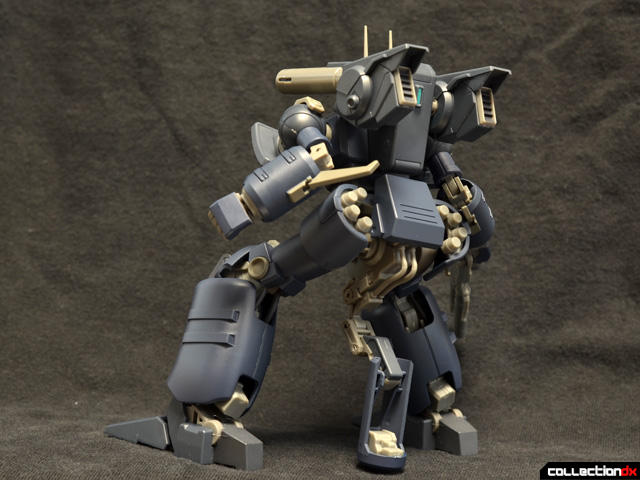 There are a lot of moving parts for the firing stand, and all of them are nice and tight.  The whole setup looks suitably techy and Katoki-convoluted. 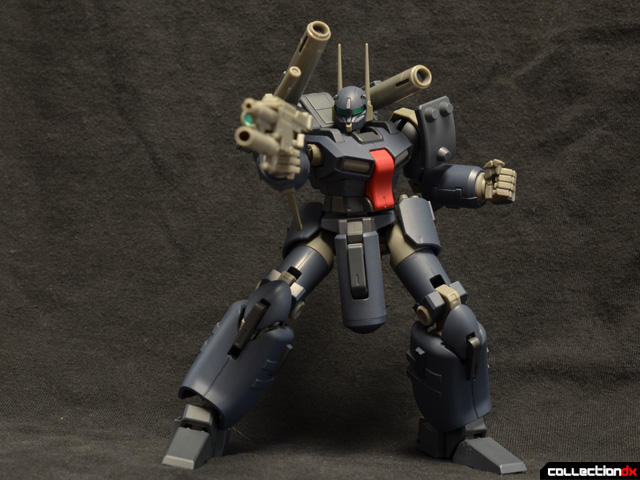 For all my complaining, the DT is at least a fun figure.  Those big feet and all those guns make for a stable figure that looks ready to defend against the Zeke hordes! 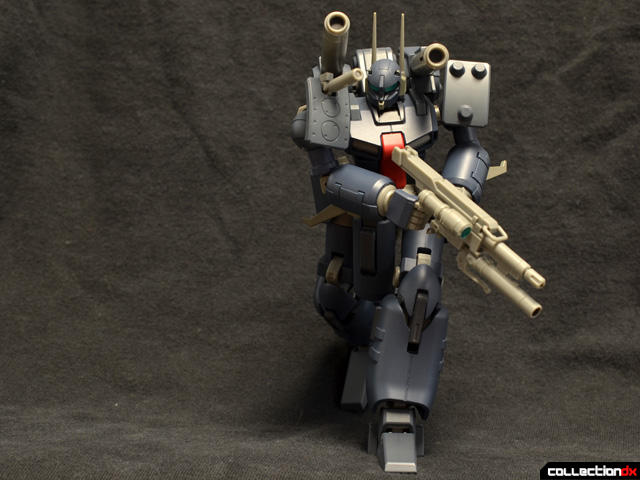 The problem is, this figure cost 5,040 yen retail, and was a web exclusive, meaning you could not get it without paying extra costs to a middleman and having to be in the right place at the right time to preorder one.  I got mine for a hundred bucks shipped to the US. 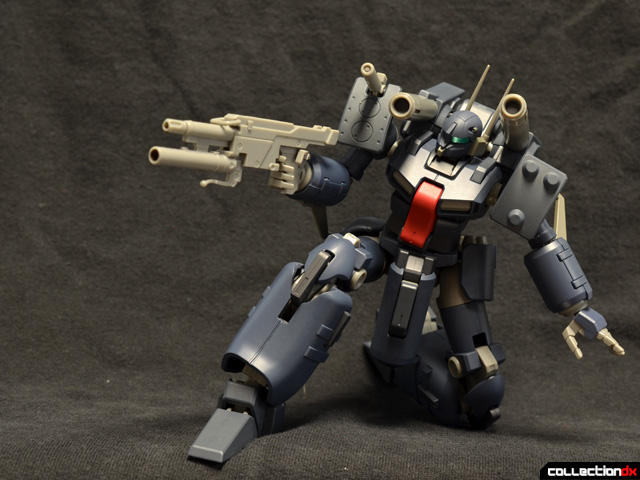 It's sharp and pretty, but this is not a $100 figure.  It's not even a ~$75 figure, assuming you were in Japan to buy one at retail.  Aside from the slightly larger size and added complexity of the firing stand crotch, I don't see any reason why this couldn't have been a regular Robot Spirits release.  Other than the fact that nobody would have bought it.  The only thing differentiating it is Katoki's seal of overpriced approval.  The fact that it did not even come with the markings pictured in all the promo shots and on the box is a pretty dishonest move.  The markings might come eventually, but they will still be stickers and have to be applied.  Applying all those Katoki markings myself does not make for a premium experience befitting of the limited and premium intent of this figure.  Bandai knows how to make a premium product, so why do they still shovel out these half baked webex bait-and-switch releases? 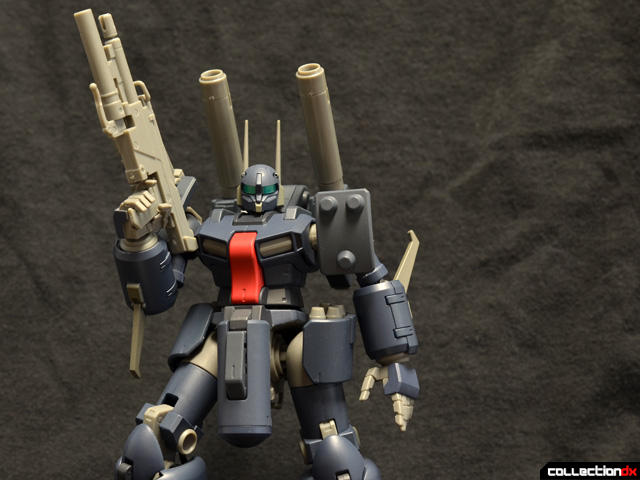 The Guncannon DT is a nicely made figure, and if you are a fan of the design you'd enjoy playing with this figure.  Not that you should run out and track one down and pay a high price for it.  I can only imagine that anyone buying one second hand or from some dealer on ebay is screwed when it comes to getting the sticker sheet later.  If the contents of the box people paid for was not 100% ready to go, why ship an incomplete package and make a giant headache for both Bandai and customers later?  The DT is nice enough, but will be vastly improved by the markings it should already feature. 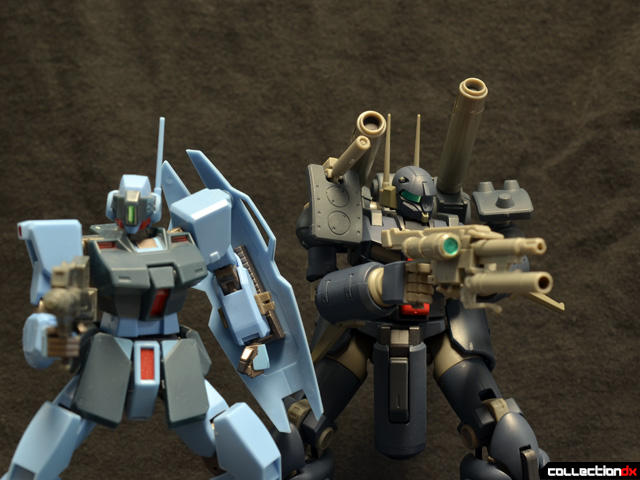 In short, even if you could buy this, you should not.

i was on the fence about buying this figure. like all the robot spirit mobile suits, they have no panel lining. no way! i would have gladly paid the high price for a well designed figure, but flimsy finishes? no sir. reguardless, thanks for the review and pictures. nice!

Great review and like you I didnt think these guys were worth the price and you just confirmed my thinking. They look great, but sometime I have a hard enough time dropping the $40 to $50 for a regular robot spirits bot let alone dropping a $100. I'll stick the the few characters I actually care about rather than venturing out into uncharted territory. Thanks for the review.