The MS-05L Zaku I Sniper Type originally hails from the Harmony of Gundam series of Mobile Suit Variations (MSV), but is more prominently recognized for its appearance in the recent Mobile Suit Gundam Unicorn.  Yonem Kirks, leader of the Zeon resistance on Earth in UC 0096, pilots his ancient Zaku I Sniper to great effect in the attack on Torrington Base. 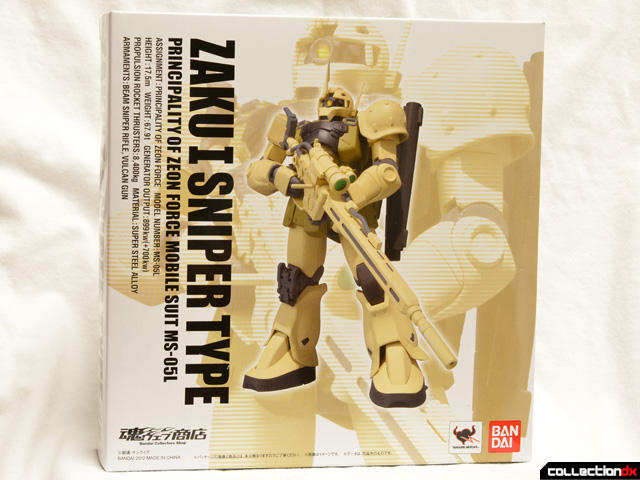 The Zaku I Sniper is also the latest release in Bandai's Robot Spirits premium sub-label 'Ka. Signature'.  As with the previously reviewed Guncannon DT, the Zaku Sniper comes in a sharply printed box protected by an outer brown shipping box.  Also included in the box but not pictured was a waterslide decal sheet for full Katoki-ifying, as well as the decal sheet for my Guncannon DT bought from the same retailer that was not ready for when that figure shipped.  In the near future I plan on applying the decals to both figures and will toss up a quick update review of both figures in full Ka. form. 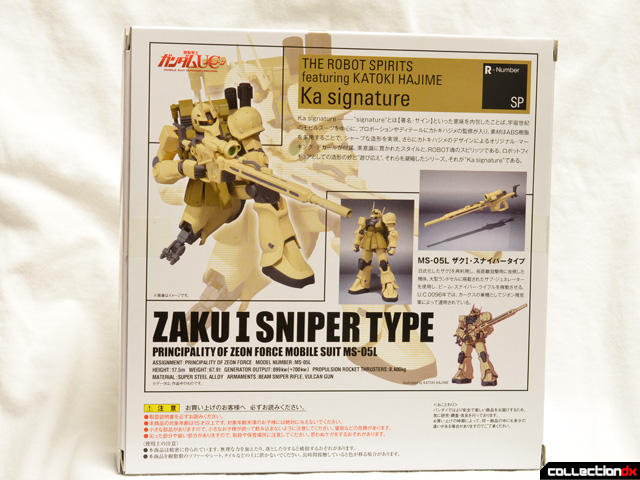 The design of the box is clean and effective.  The regular Robot Spirits line boxes feature colorful graphics and a fun vibe, while the Ka. Signature boxes are muted and serious.  The Zaku Sniper very much wants to be an 'adult collectible'. 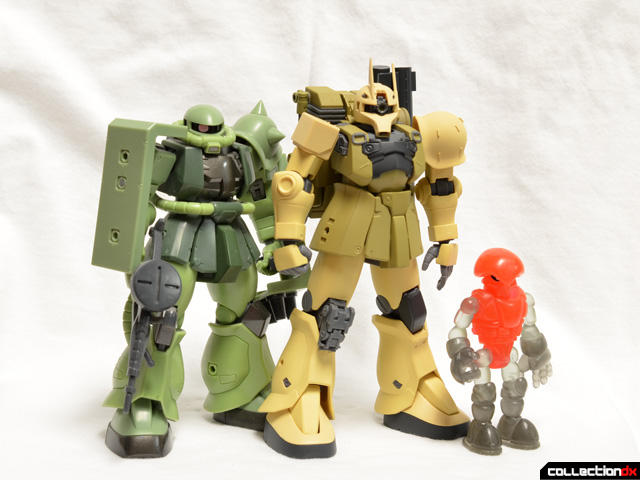 Out of the box, the Zaku I Sniper stands almost a full head taller than the previously released Robot Spirits MS-06 Zaku II.  There seem to be some shared parts with the earlier Zaku II release, including the feet, parts of the arms, and likely some of the joint parts, but it is mostly a new sculpt.  Unlike regular Robot Spirits figures, the Sniper features a matte finish that feels more akin to a painted model kit. 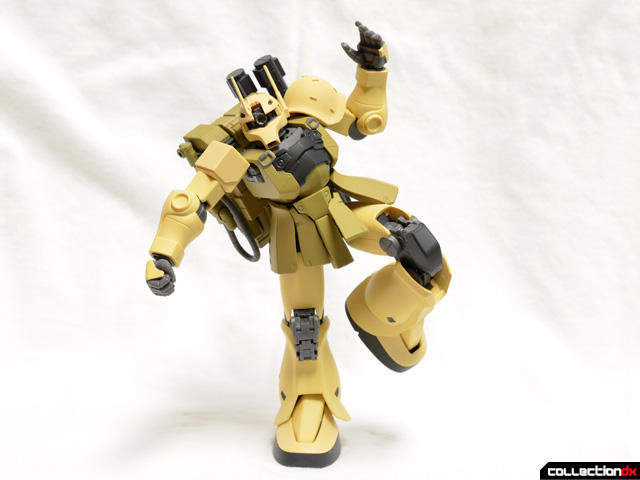 The Sniper Zaku features a more detailed and 'refined' finish than the regular Robot Spirits releases, but still achieves the high level of articulation standard to the line.  The shoulders feature some extra spiffy joints to get into very natural firing positions. 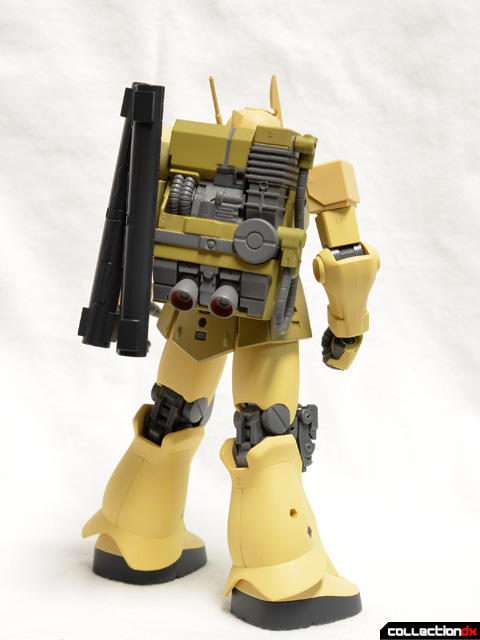 Out of the box the Sniper Zaku requires a little bit of assembly to fully kit out.  The massive power plant backpack must be attached, and the power cable and two barrel cases attached to the backpack. 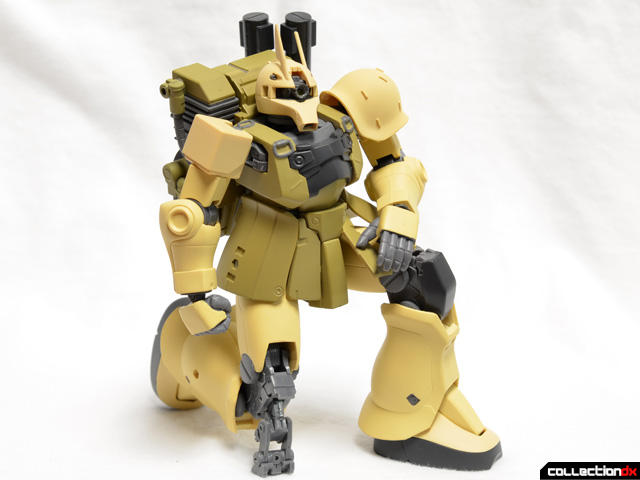 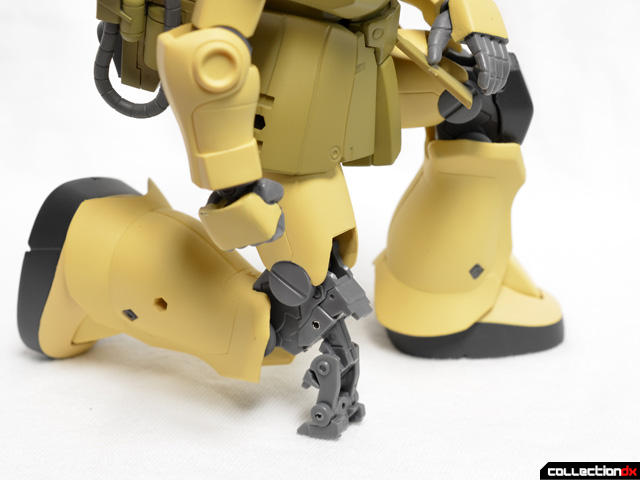 Similar to the Guncannon DT's wonky crotch-bracer firing support feature, the Zaku I Sniper Type features its own foldout firing support part.  Instead of the right knee pad features a deployable firing stand for a more level kneeling position.  The parts are tight and the Zaku sits perfectly level in its firing pose. 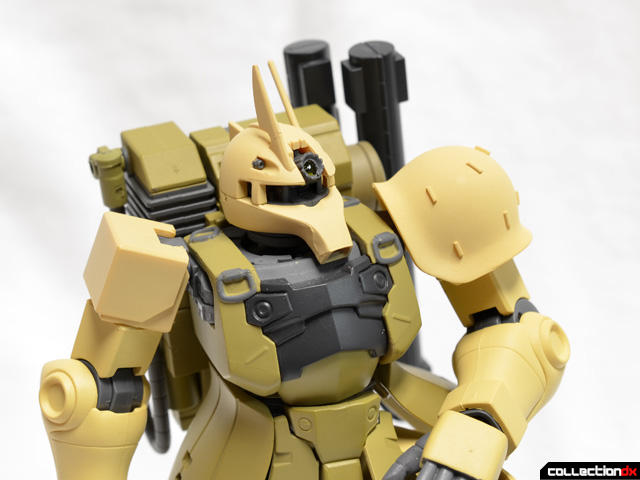 Detail is sharp all over, but especially nice on the head.  The enhanced sniper scope mono-eye can elevate, but not move side to side. 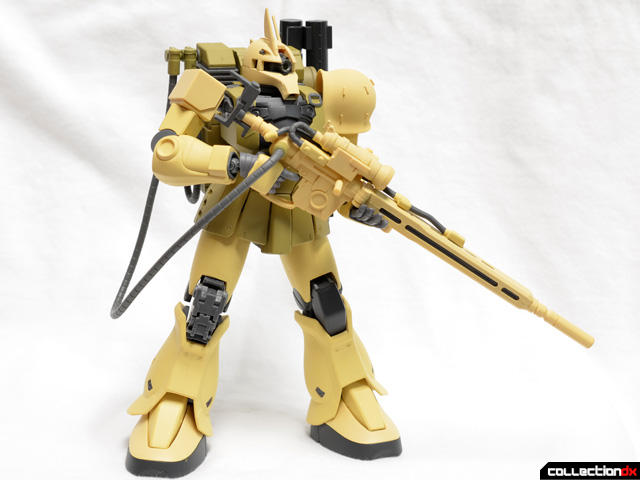 The most prominent accessory included with the Zaku Sniper is, obviously, that sweet, sweet sniper rifle. 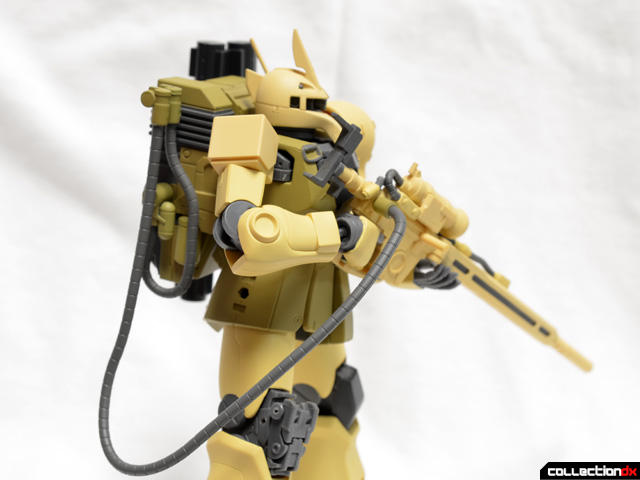 The rifle is gigantic, and features a flexible plastic power cord that attaches to the power supply on the back. 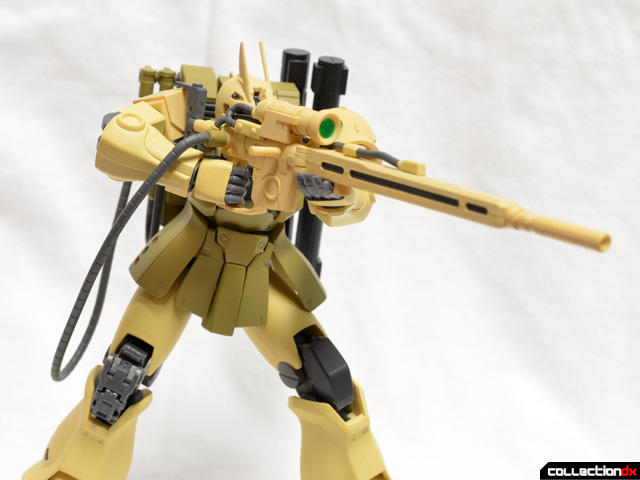 Multiple hands and excellent articulation allow the Sniper Zeke to get in some great, natural aiming and firing poses. 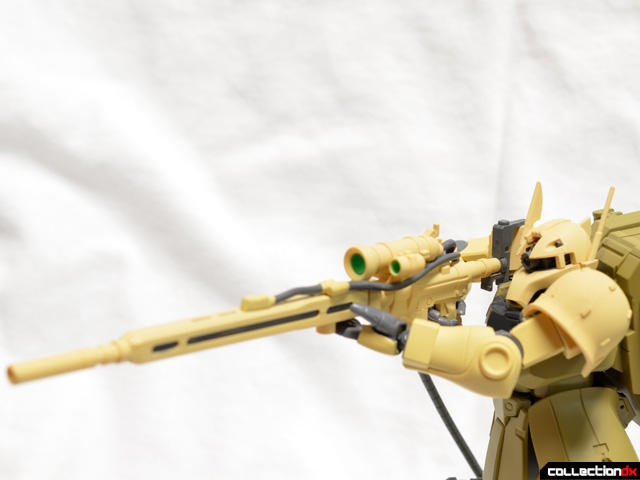 There's something really alluring about the lone-wolf sniper, especially in giant robot form.  The figure manages to capture that appeal with aplomb. 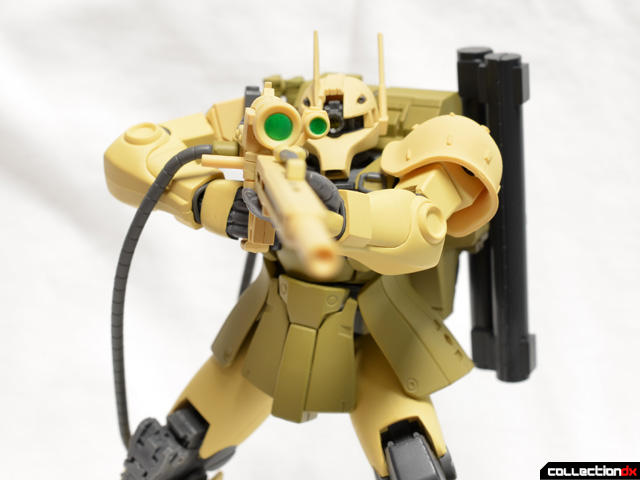 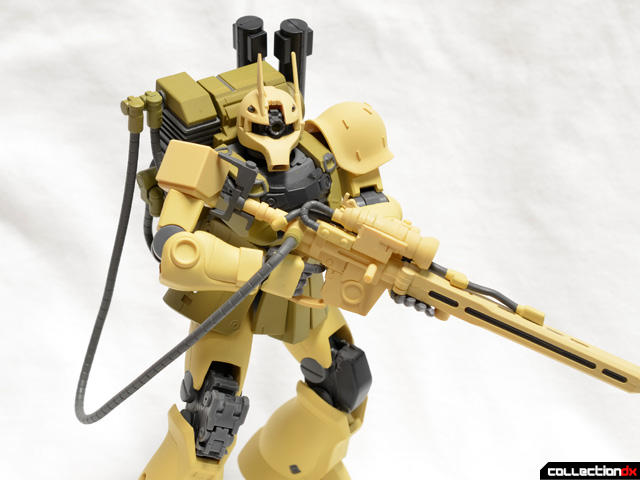 Aiming, shooting, or charging ahead, the Zaku Sniper looks awesome.  There is so much tacticool and Real Robotyness that it hurts.  It's like Katoni knew exactly what elements appeal to me and glommed them together into one design. 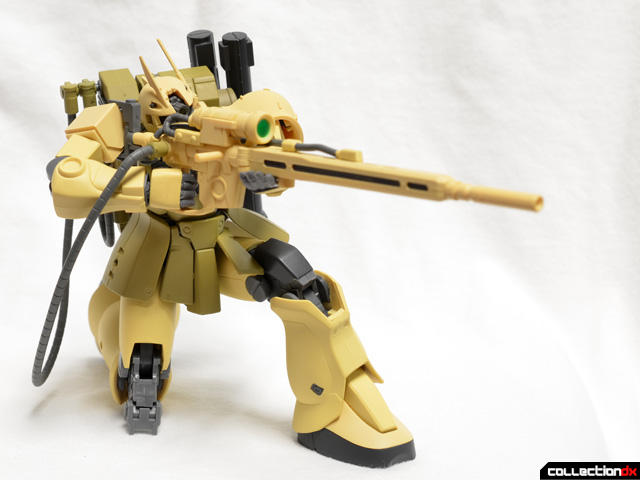 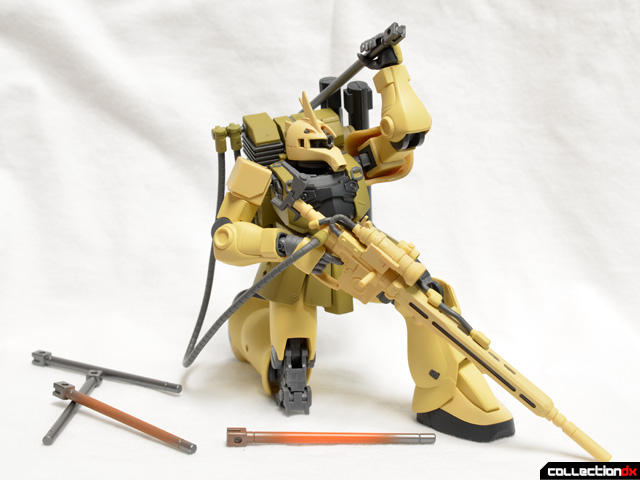 Adding to the Hardcore Real Robot Action, the Zaku Sniper comes with a number of expended barrel effect parts.  The MIP-X79-E0-type BSR (Beam Sniper Rifle) is a massively powerful weapon, so much so that the barrels are only good for one shot.  The overheated barrel must be ejected and replaced with a fresh one before another shot can be fired.  To depict this, Bandai has included a number of barrels painted with various degrees of heat glow that can be strewn about the Zaku.  The paint work on the barrels is sharp and effective. 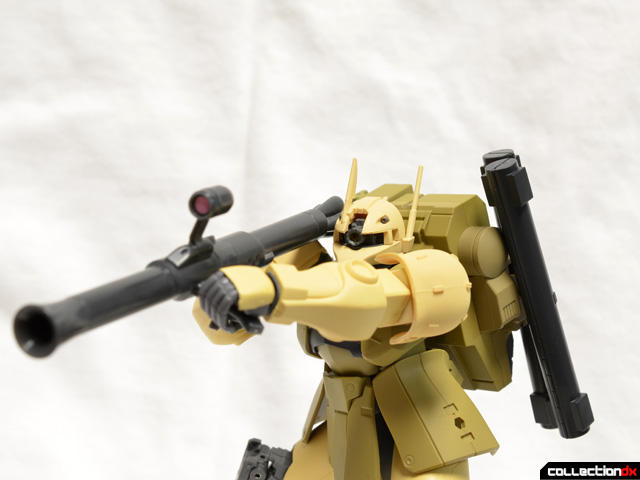 Thanks to the various hands, the Zaku Sniper can also wield other Robot Spirits-sized weapons.  It does a heck of a lot better job holding the standard Zaku bazooka than the Zaku II figure does. 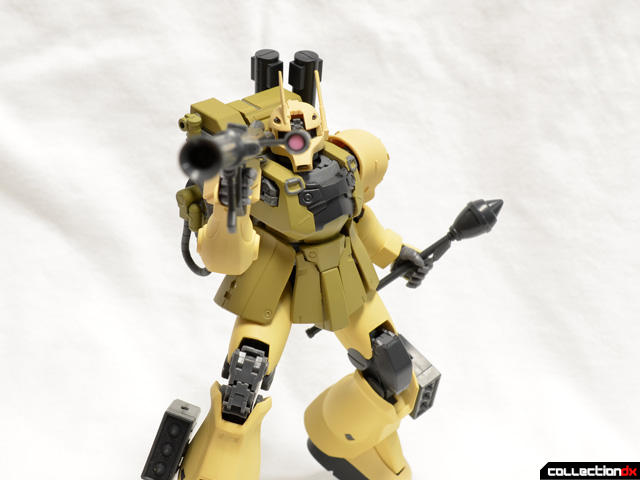 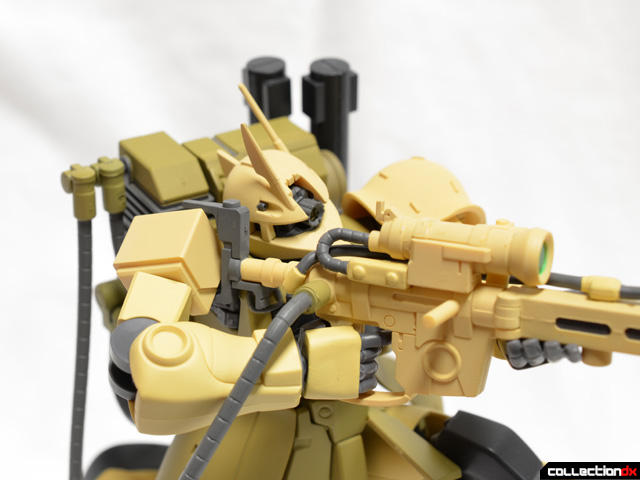 One final detail that the Zaku Sniper figure nails perfectly is the shoulder stock.  Many robot designs and toys of said designs have included guns with butt stocks in the past, but those figures rarely seem to feel like the gun was designed to the fit the figure.  The shoulder stock on the Sniper Zaku's rifle features a cutout that perfectly fits the square unarmored shoulder.  Somebody clearly put some thought into this and made sure the accessory fit the figure. 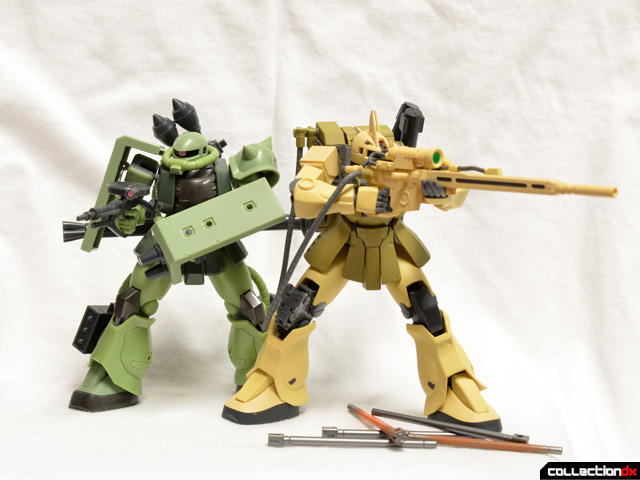 The RS Zaku I and II looks great next to each other.  I can imagine the green grunt Zaku providing cover while the Sniper lines up a shot, and then clearing a path for a getaway.

As with all Ka Signature Robot Spirits releases, the Zaku I Sniper Type was a Tamashii web exclusive that had to be preordered through a middleman, and sold out pretty much everywhere before it shipped.  I mentioned being extremely disappointed by the Guncannon DT for the hundred dollars it cost me, but the Sniper Zack is an entirely different beast.  The detail and articulation are both fantastic, and the figure really works as a complete package.  I love setting the Sniper up perched from different shelves taking aim at some unseen enemy.  It looks like this guy can still be picked up for around a hundred bucks on the aftermarket.  Fans of the design or general tacticool could do worse than to consider picking this guy up.

the Katoki proportions and paint finish seem reminiscent of a Zeonography figure. Is it the same height as the Zeonography Zakus? Seems like it would go great with the Desert Zaku / tan Zaku F2