Kamen Rider Kuuga Rising Ultimate was provided by Tamashii Nations Bluefin. You can get yours at BigBadToyStore!

Kamen Rider Kuuga is perhaps one of the most powerful Kamen Riders ever, with the ability to easily destroy the entire world with a single Rider Kick. In the 10th Heisei anniversary series Kamen Rider Decade, Toei gave Kuuga one more upgrade: Kamen Rider Rising Ultimate Kuuga.

The SIC Kiwami Tamashii line has been reserved for mostly just shrinking down previous SIC figures into a smaller and more affordable size. However Kamen Rider Rising Ultimate Kuuga is the first figure in the line to be exclusive to Kiwami Tamshii.

Rising Ultimate Kuuga comes in a nicely detailed black and gold box. Although the box does look good, it is unusually thin which I will touch on later. 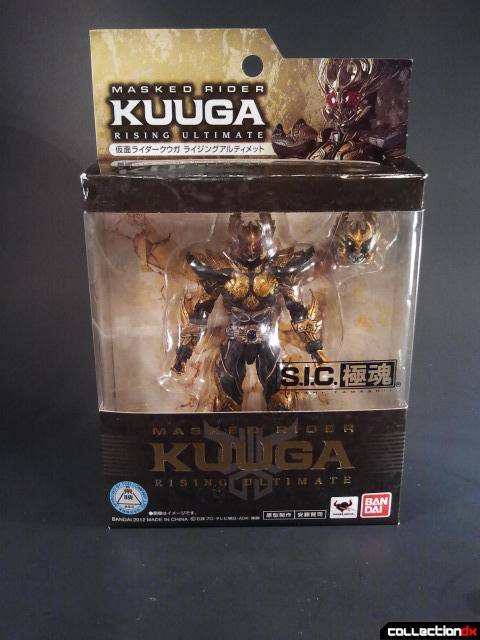 Out of the box, Rising Ultimate's sculpt is gorgeously detailed and painted. The gold paint is brilliant and there are sculpted runes and cracks all over his body. It's hard to believe that this figure does not have a larger counterpart considering how crisp and well detailed it is. 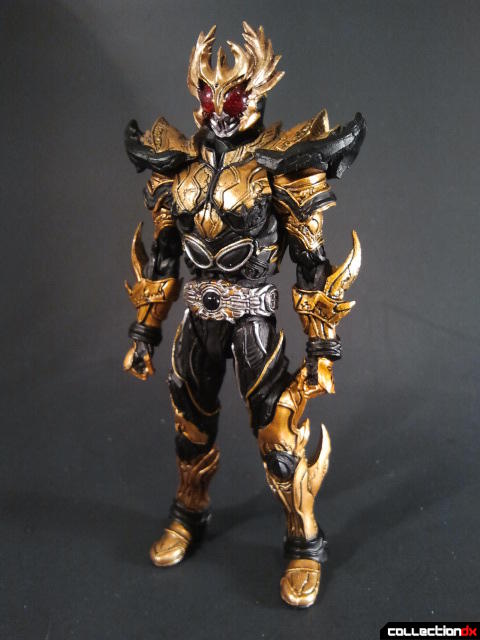 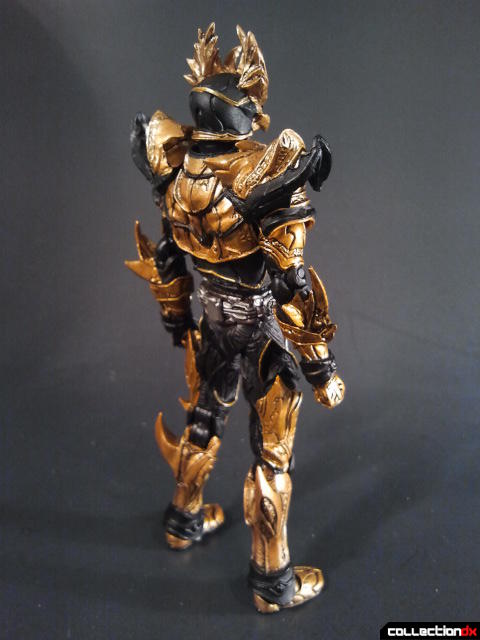 I personally do think that the Rising Ultimate's horns are a little silly, but this design makes it much more natural looking, like an evolution on the Kuuga design. The red compound eyes are also fantastic and shine under proper light. 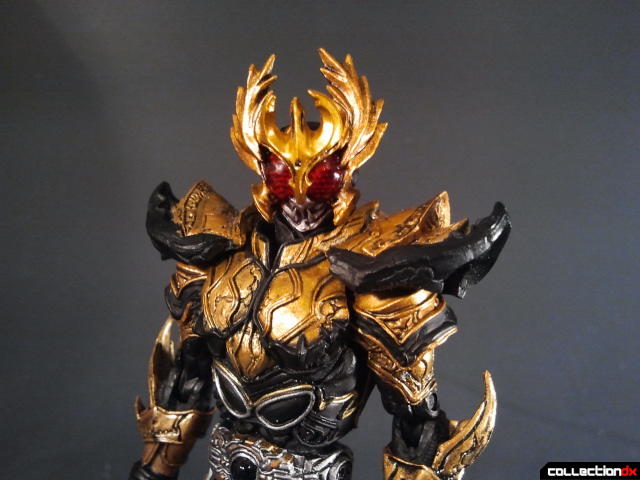 Next to his other form, Kuuga looks like a logical evolution and it's very believable that Mighty form could go from this form to Rising Ultimate form. The additional bulk and subtle changes in detail are what really set this figure apart from the first release. 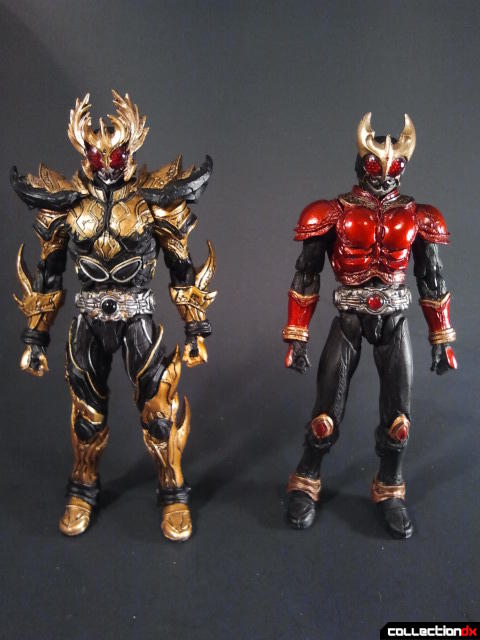 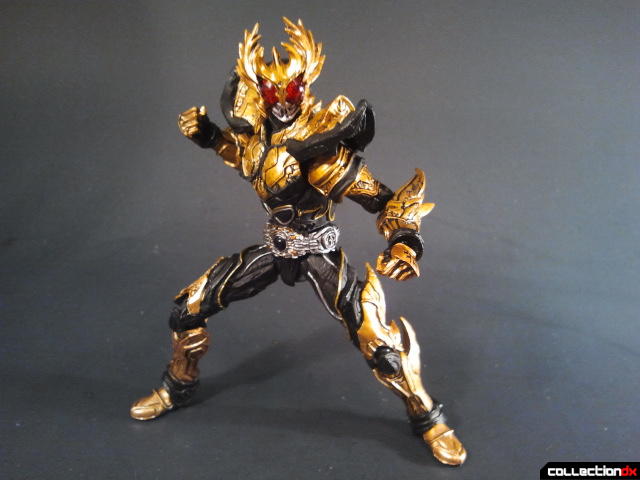 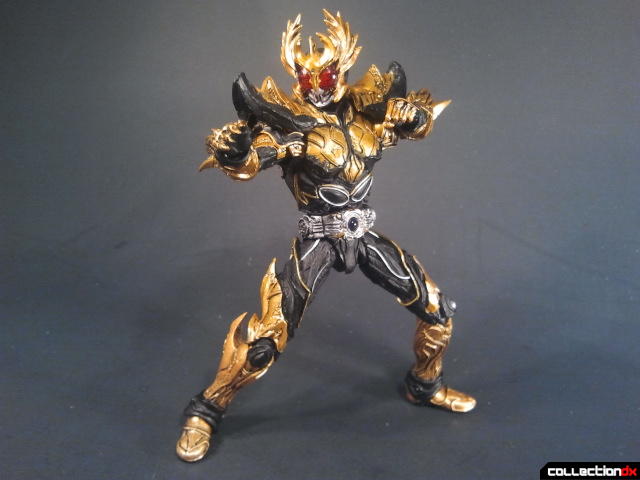 One apartment that Rising Ultimate lacks in is his accessory count. He only comes with four hands and an alternate head. No stand or effect parts like Kuuga or Decade did previously. It's very unfortunate considering what a good precedent that the previous figures in this line had set. 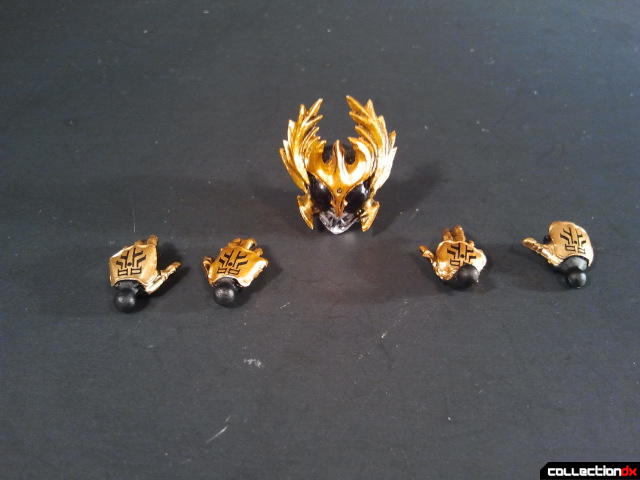 In addition to a pair of splayed open hands, Rising Ultimate comes with two specific hands: an open “Henshin” hand and a thumbs up hand. Both of these are nice touches, but I find it odd that he comes with the thumbs up hand, considering that Godai never turned into this particular form and that is his thing kind of. 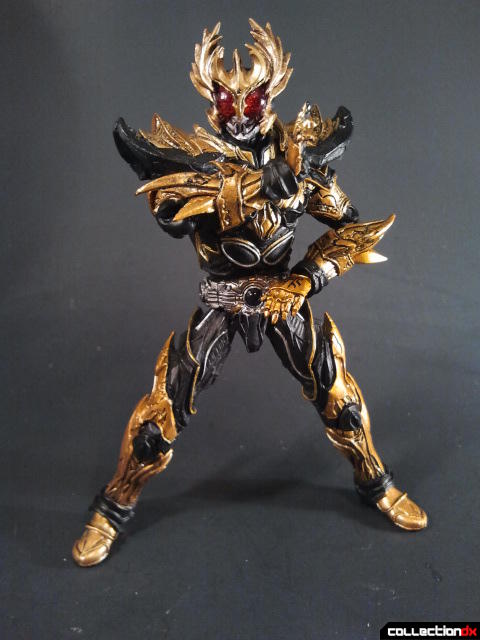 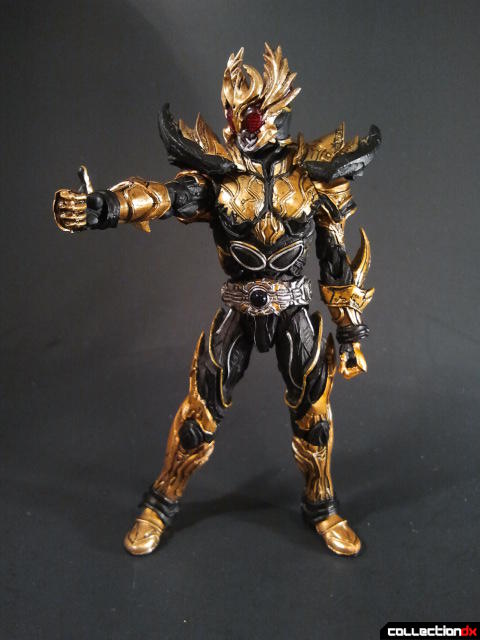 On the plus side, you can easily turn the hand and use it to make him give someone a thumbs down, much like Kamen Rider Eternal would. 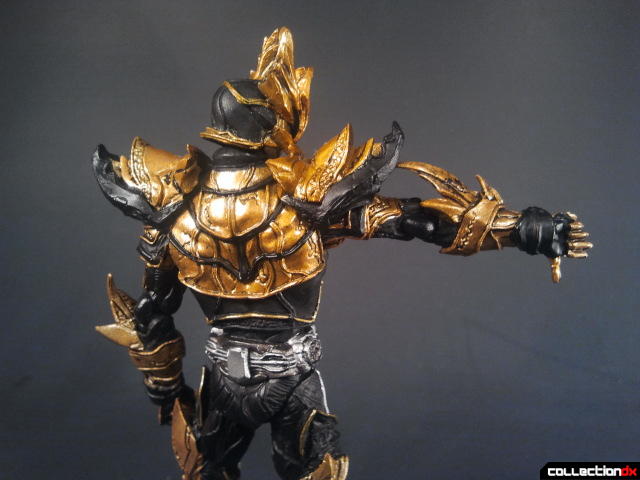 The black-eyed version of Rising Ultimate Kuuga represents when the user is unable to control the power of Kuuga and goes evil. What's disappointing is that these eyes are just flat black plastic. No additional sculpted detail or anything. It's unfortunate since the original design for the black eyes is a smoky black clear plastic with a compound effect. It feels a little lazy on Bandai's part, but it still looks good at this size so I can't complain too much. 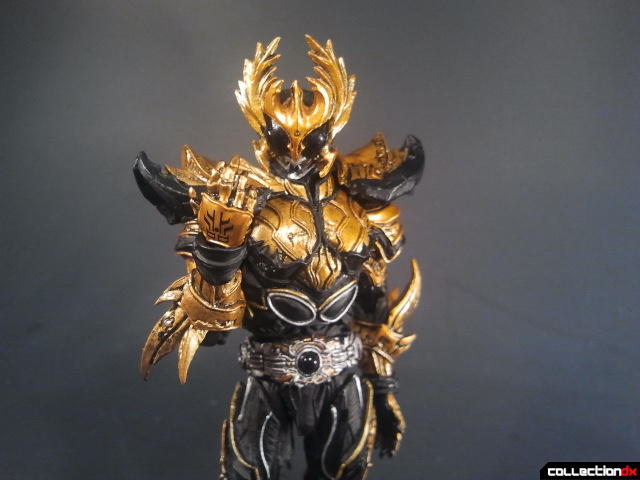 I actually think the toy looks better with black eyes instead. It really brings out the more sinister aspects of this design and he looks like really good as a berserking warrior. 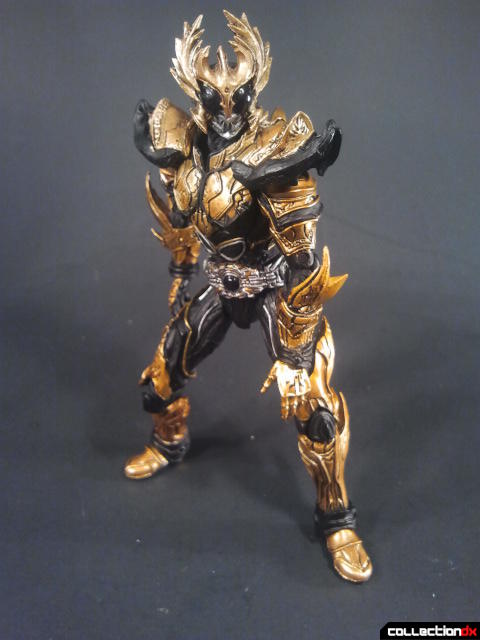 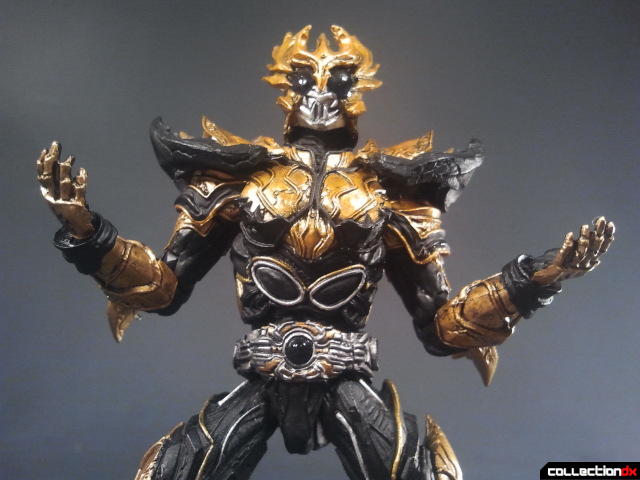 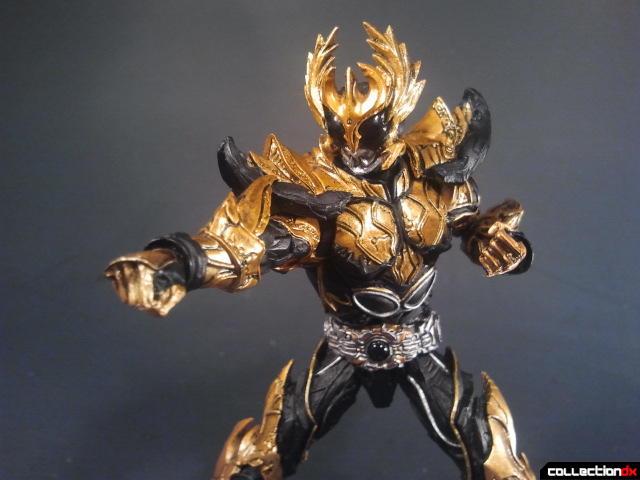 Even though Rising Ultimate form does not come with a stand or effect parts, if you have Mighty form, all of his effect parts and stage work with him and look just as awesome as it did on Mighty form. 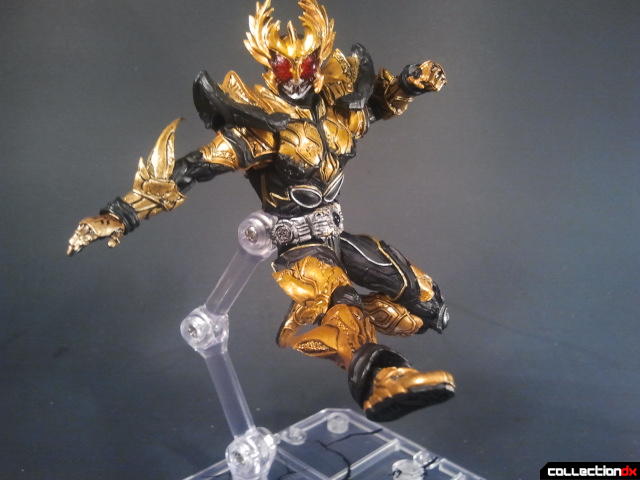 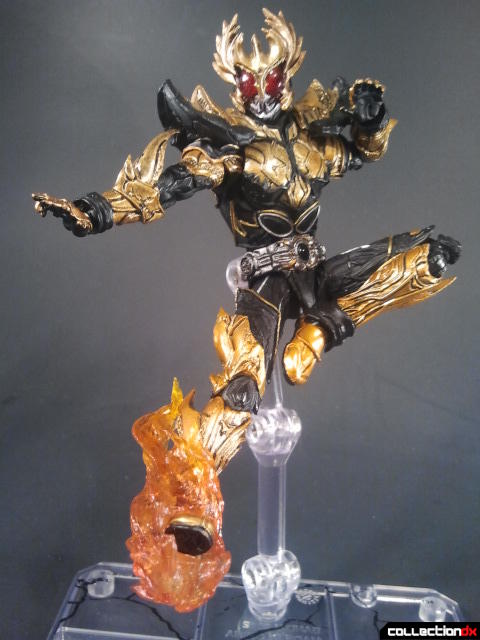 Rising Ultimate form came as a surprise in the Kiwami Tamashii line, considering that the other standard Kuuga forms were most speculated to be next. I don't think anyone could have expected a completely new SIC design exclusively for Kiwami Tamashii. Even though he doesn't come with a stand or any effect parts, Rising Ultimate form is still a gorgeously detailed figure that is super poseable. If you have not gotten any figures in this line yet, this figure is a good spot to jump into the line and check out why this is one of my favorite Japanese toylines. 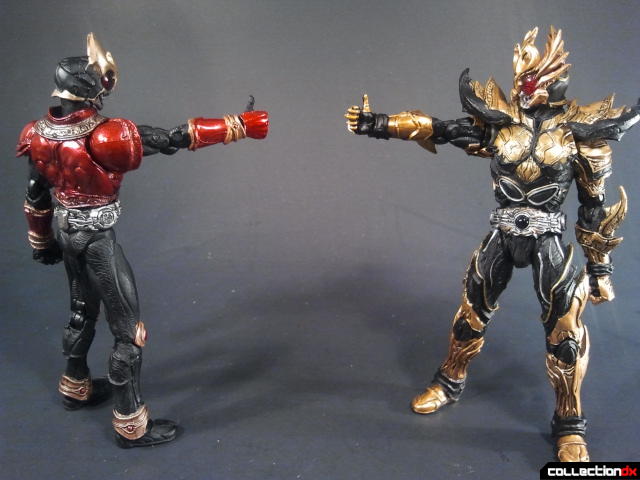 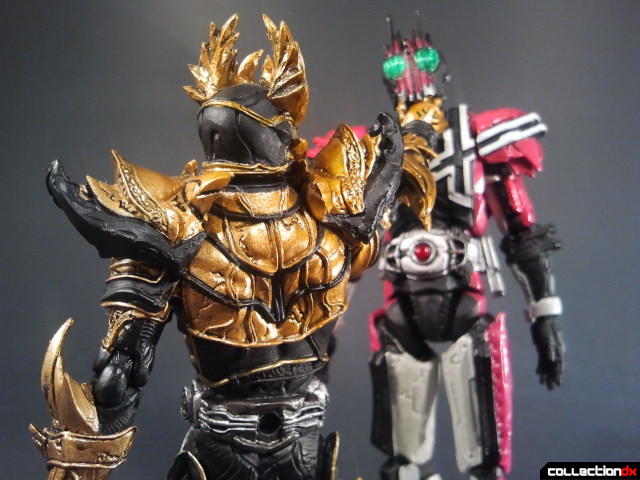 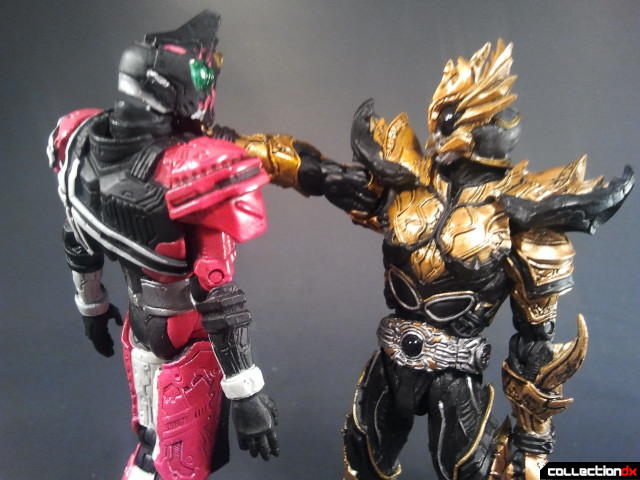 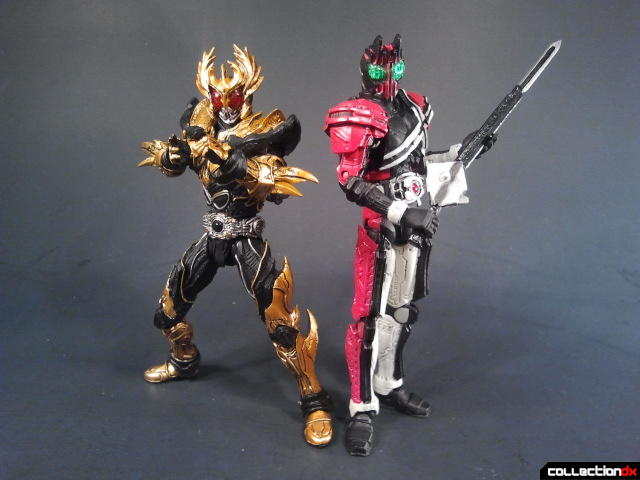 Kamen Rider Kuuga Rising Ultimate was provided by Tamashii Nations Bluefin. You can get yours at BigBadToyStore!