Kamen Rider Knight is one of the main protagonists from 2002's Kamen Rider Ryuki. He is usually a loner, but befriends Kamen Rider Ryuki and becomes his reluctant ally in the Rider War. Later in the show, Knight gains the ability to activate Survive Mode, where he becomes super powerful. 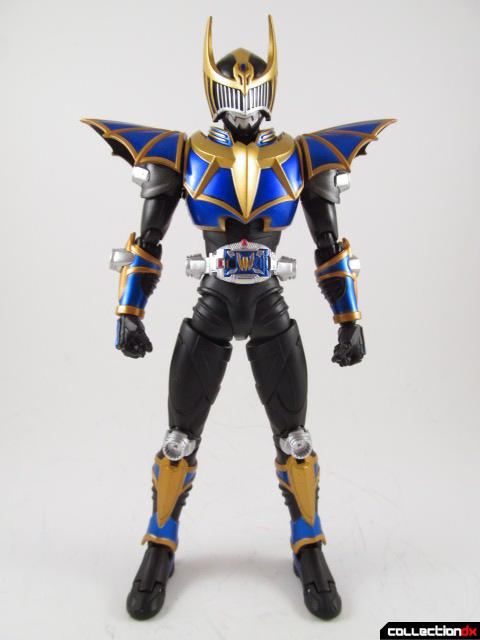 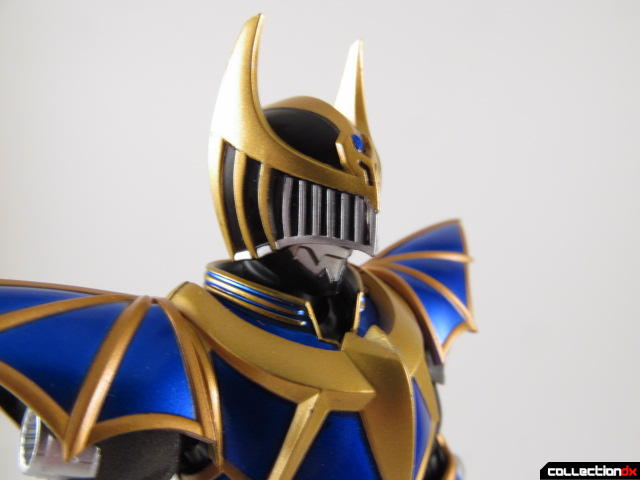 First and foremost, Knight Survive looks amazing. The blue and gold is really shiny and pops against the beautiful matte black of the rest of the toy. Every suit detail from the show is represented here. Bandai really put some love and effort into this piece and it really shows! 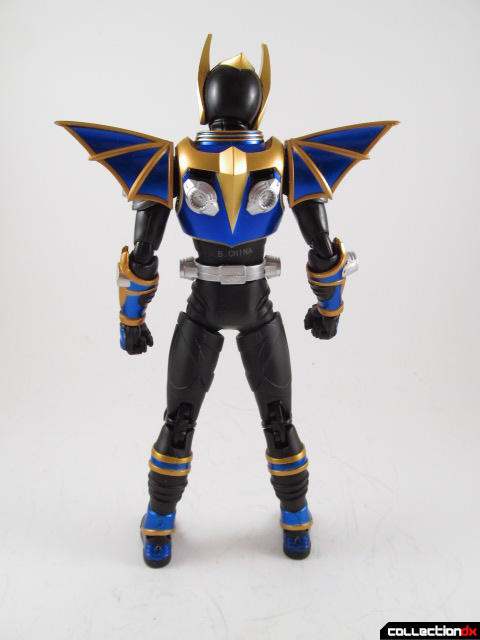 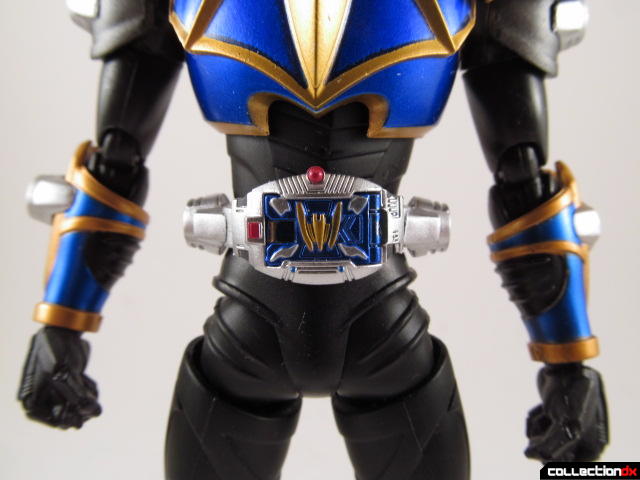 There is so much sculpted detail on him! His belt is immaculate, and I don't think there is a single detail on him that is out of place. You can even remove the deck from his belt! That's insane! Another sweet feature is that his feet are diecast! This gives him some added stability and makes it super easy to achieve any pose! 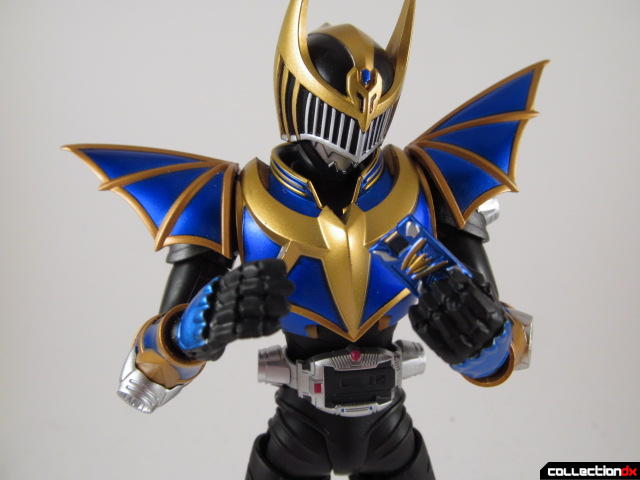 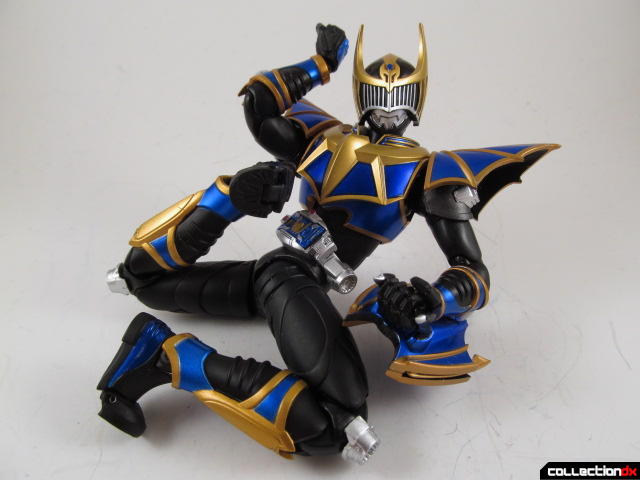 Since this is a Figuarts release it's expected to be poseable, and Knight Survive delivers! The usual ball joints and swivels that accompany every S.H. Figuart are accounted for, and they even added swivels on his forearms! The only problem in his poseability are the shoulders. Since he has these large shoulder pads it can be difficult to maneuver his arms around. This isn't really the toy's fault since that's a design of the actual suit. There are hinges on them and that alleviates some of the issues. 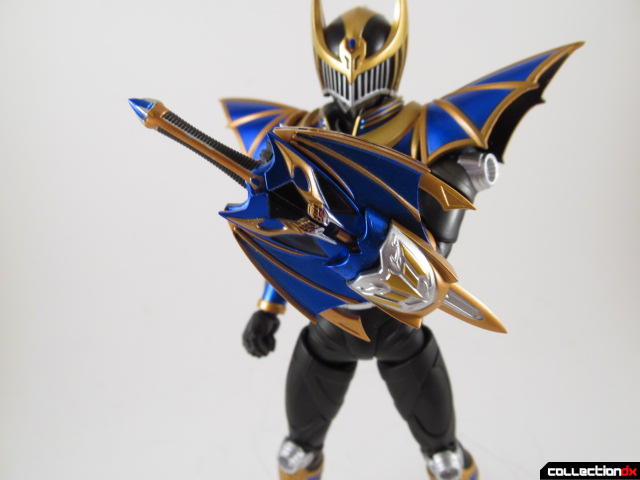 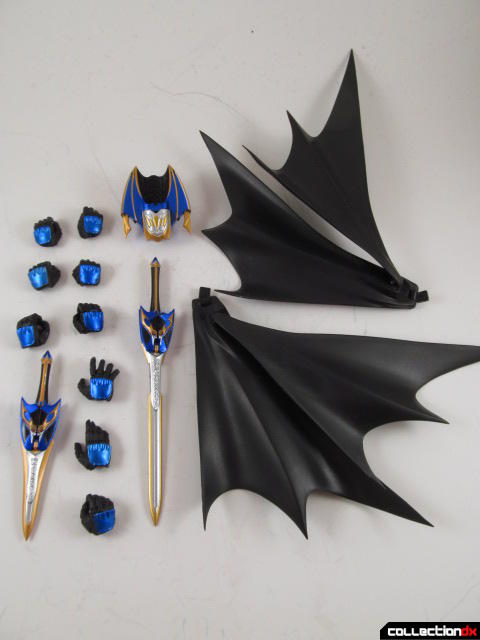 Knight Survive comes with a TON of accessories! He comes with 3 full sets of hands, including fists, holding-things hands, and card-holding hands. He also comes with 3 extra right hands, including a sword-holding hand, a splayed hand, and a calm hand. This is due to the fact that Knight Survive always holds his Dark Visor in his left hand. Speaking of which, he totally comes with his Dark Visor and two versions of the Dark Blade. There is a small version that is inserted into the Dark Visor so he can use the Dark Arrow and there is a larger version that is used like a normal sword. Both versions have a hilt that opens to insert the included Advent Cards. Knight Survive also comes with 4 cape pieces that attach to one another, and I'll talk more about that later. 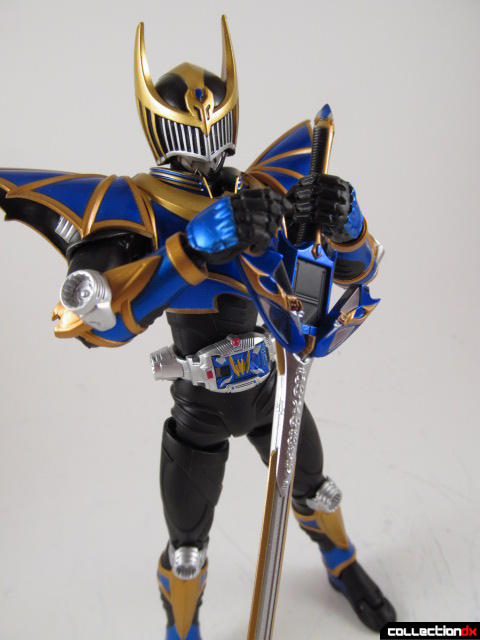 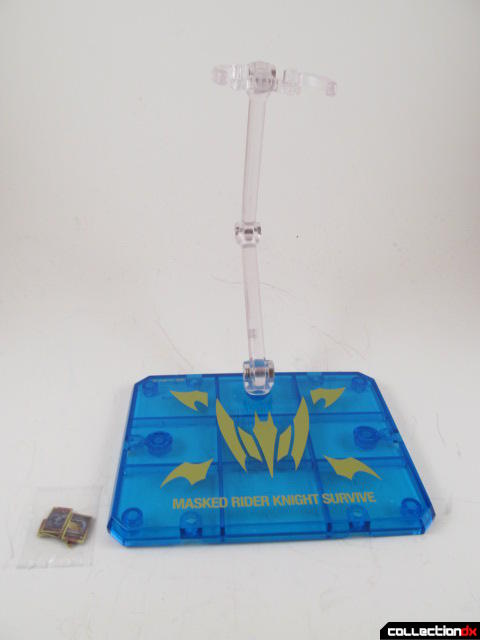 He also comes with a custom Tamashii stand! It looks really nice, and it's really cool that they added that in! Also, the Advent Cards that he comes with are made of cardstock and WILL GET LOST. You're better off just keeping them in the little baggie unless it is absolutely NECESSARY to pose him with them. 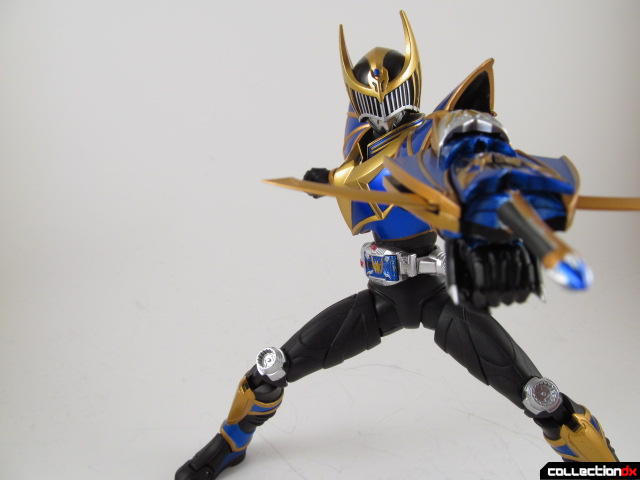 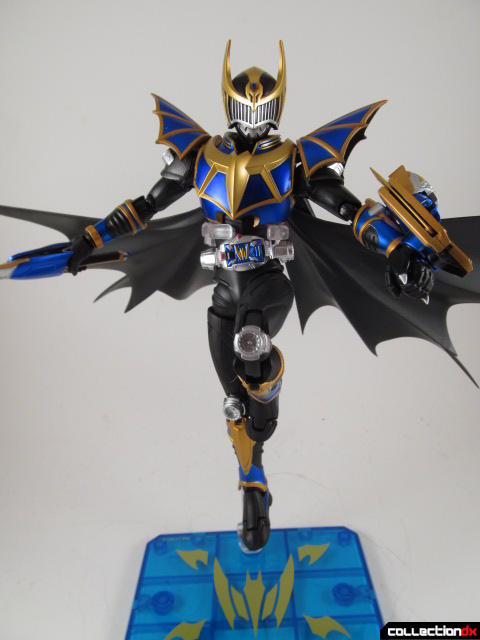 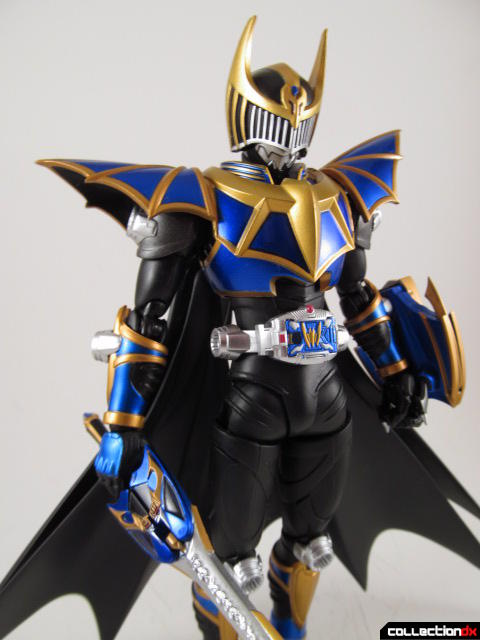 Ok, I guess now is as good a time as any to talk about Knight Survive's biggest flaw: the cape. The pieces constantly pop off of his back, which makes posing him with them a pain. Of course, when you do manage to get them to stay he looks super cool! I've found that you can take a small piece of a paper towel and shove it on the pegs when you insert them and that will keep them planted fairly well. It's an easy workaround, but it's something I don't think we should have to do. All that being said, the problem is still very minor. 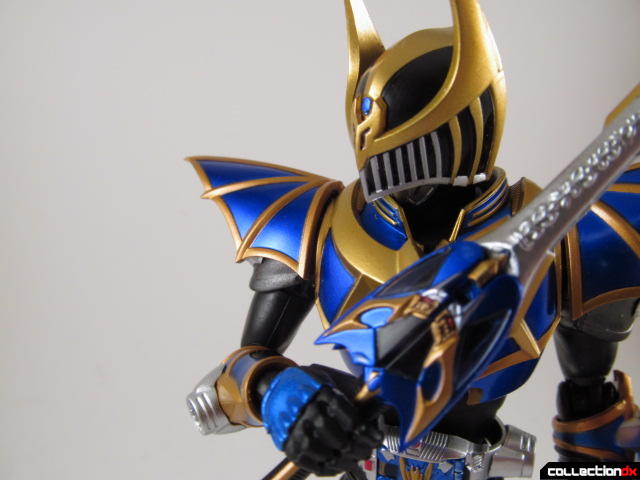 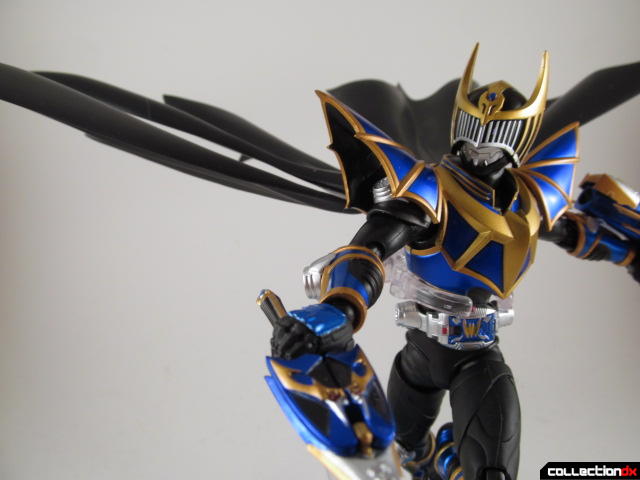 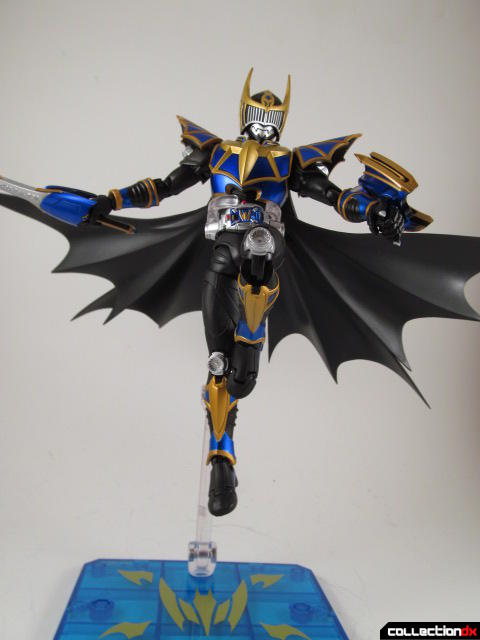 During the extensive testing process for this action figure (I flew him around my room and pretended that he was a spaceship), I discovered that Kamen Rider Knight Survive is an AMAZING toy! Even with the flaws with the cape and shoulders it is one of the best Figuarts to come out in a long time! A fan of Kamen Rider Knight HAS to own this guy, and any fan of Kamen Rider needs to give him a look! Heck, I think he would fit into just about anyone's collection! 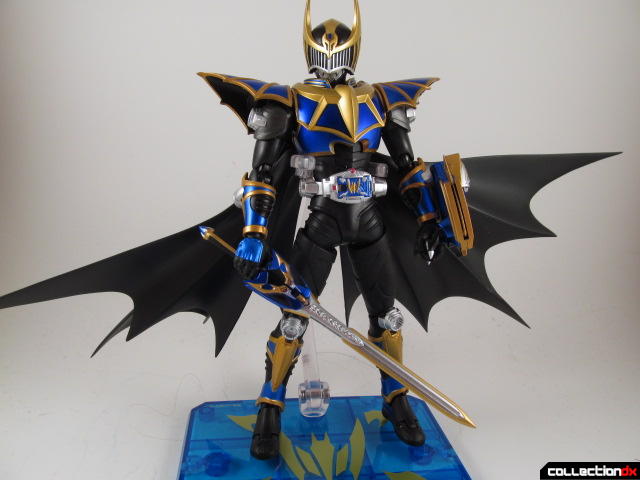 2 comments posted
I wonder if they are going to

Probably not. But it would absolutely be a web exclusive...