Kamen Rider Decade was provided by Tamashii Nations Bluefin. You can get yours at BigBadToyStore!

SIC Kiwami Tamashii Kamen Rider Kuuga Mighty Form (Man that's a long name) is a figure that absolutely blew me away. It blew me away so much that it completely raised my expectations of the line to a standard that no figure could possibly ever meet. It brought about the idea in my head of Kiwami Tamashii being a truly miniature action figure/display piece, emphasizing itself on size and detail. I was pretty positive they were going to do the various Kuuga forms next, or possibly even an N Daguba Zeba, but instead Bandai surprised me by announcing the next figure in the line was going to be none other than the Destroyer of Worlds himself, Kamen Rider Decade.

Kamen Rider Decade comes in the most vibrant Kiwami Tamashii box yet, with super bright magenta accenting the dark background. I usually don't talk much about boxes, but this is a very nice box. 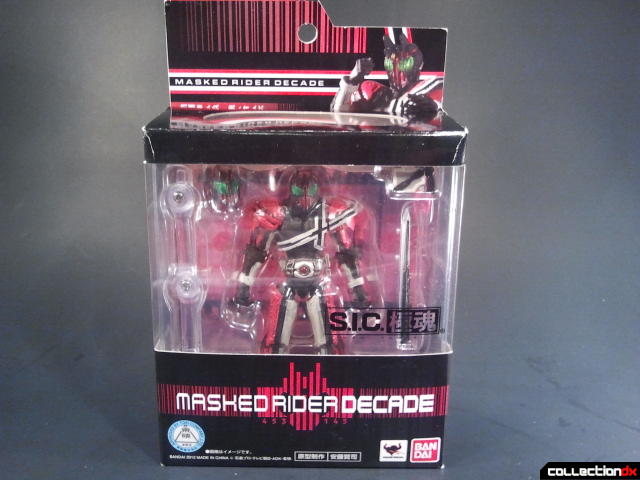 Out of the box, Decade is a very well shrunken down version of his SIC counterpart. A few changes have been made from that design though. The clear plastic on his legs have since been changed to opaque plastic, although the detail underneath has still been sculpted there. 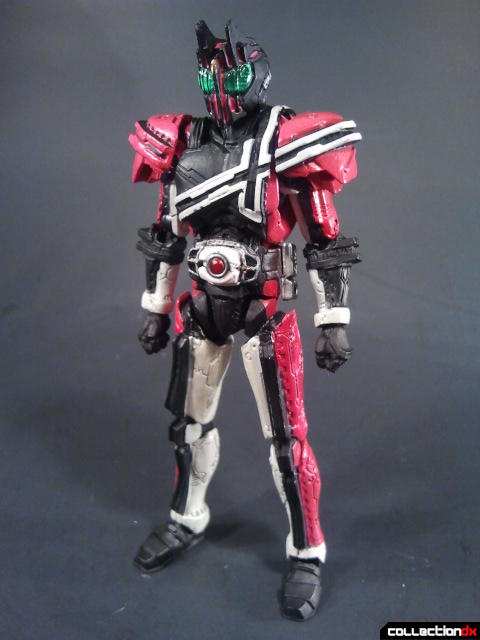 He actually looks less bulky then the SIC. At least from the front, that is. The back of this thing is still super broad to the point where it actually hinders the arms. 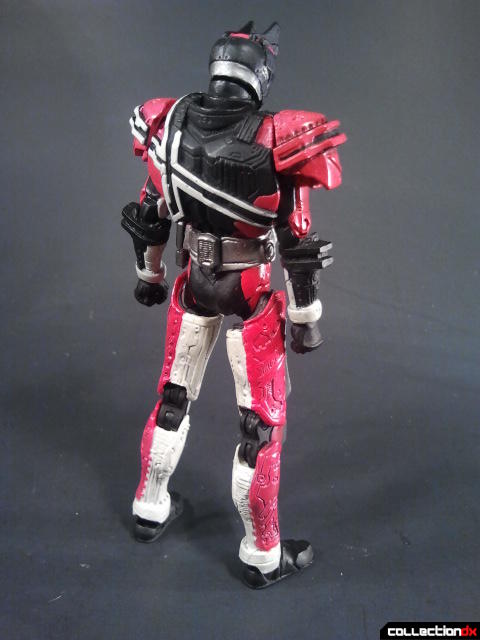 Decade's head is slightly stylized compared to the suit, with a much more angular set of cards on his face and an overall much more geometric shape and outline. I find that the cards are a bit too thick though, but since this is such a small figure, I can understand the limitations of the plastic. 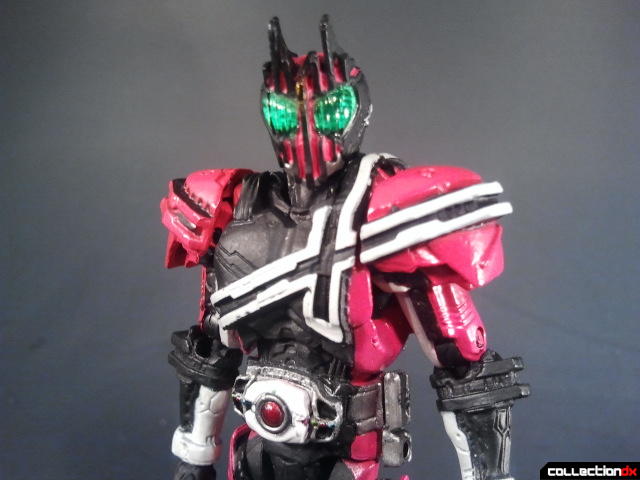 The Decadriver is also very well sculpted. It is missing a few details like the various Heisei symbols. But again, at this size it's hard to ask for such a small detail. Although personally I would have prefered if the red gem was clear plastic instead of just painted on. 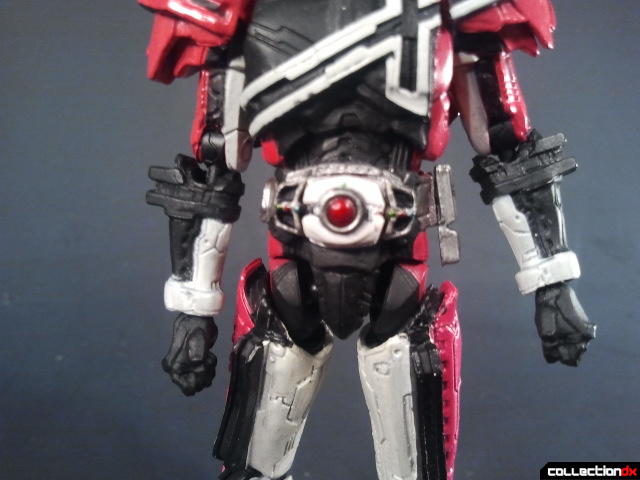 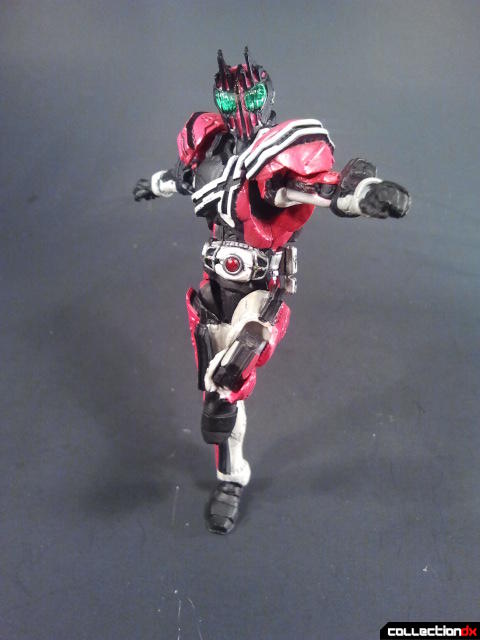 One thing I found odd was that when Decade bends his knees, there are huge gaps in his legs, to the point where it looks almost off putting that his legs are so hollow. So just be sure not to gawk at his knee and shin cavities. 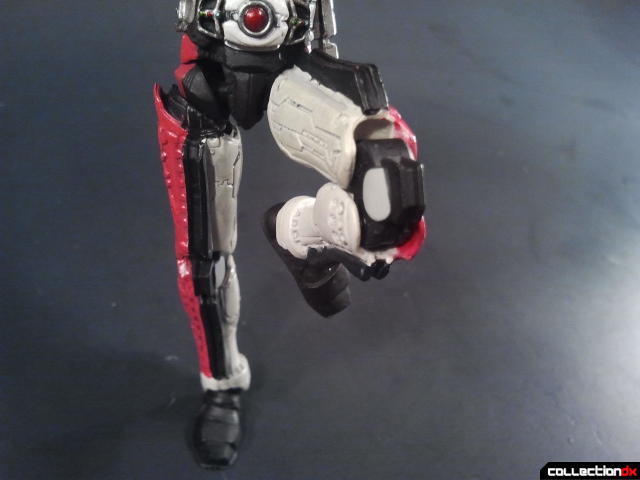 Much like his predecessor, Decade comes with a whole whack of accessories. So many in fact that I didn't feel like pulling them all out of the tray in order to take a picture of them! He comes with the standard open hands and holding hands, but what's really worth mentioning is his sidearm, the Ridebooker. 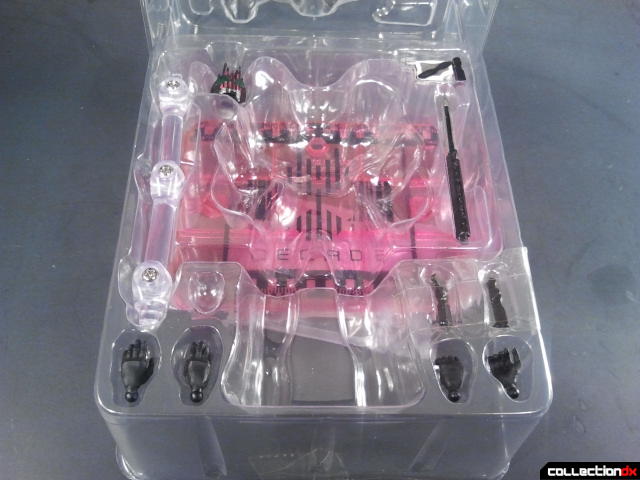 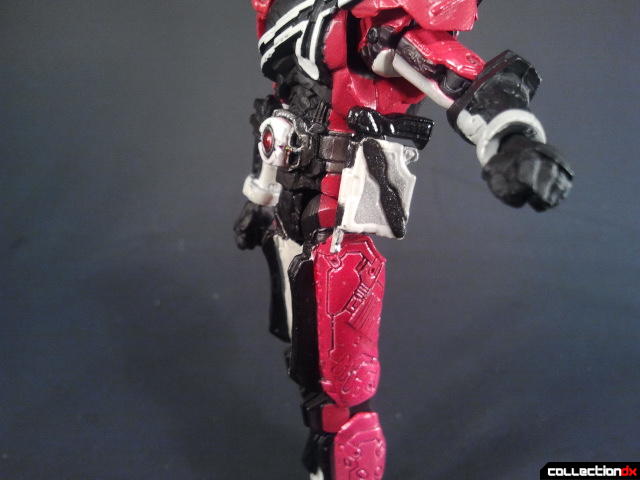 The black end of the book can be unpegged and swapped with various hands. The first most is the gun mode which just has an angled handle. The fit is actually a little loose in the hands. Although it looks alright, the angle of the handle is just wrong enough that it makes posing with the gun a little bit awkward. 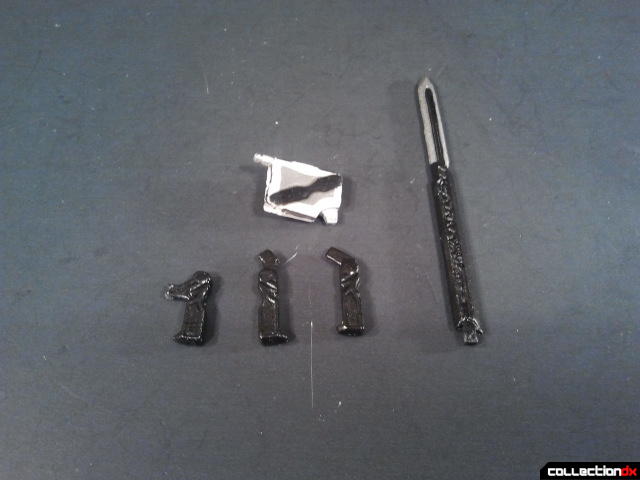 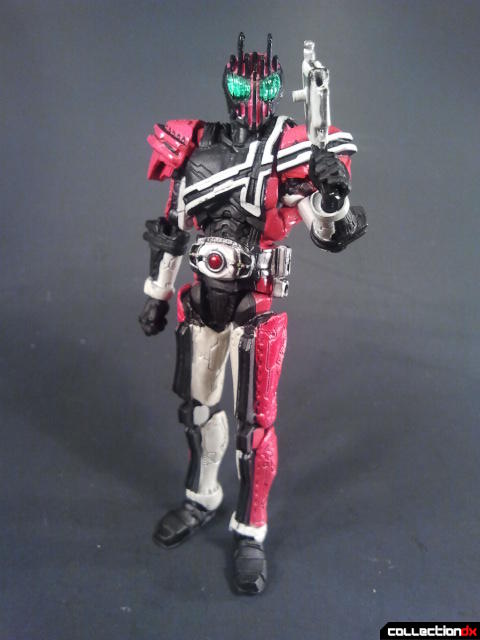 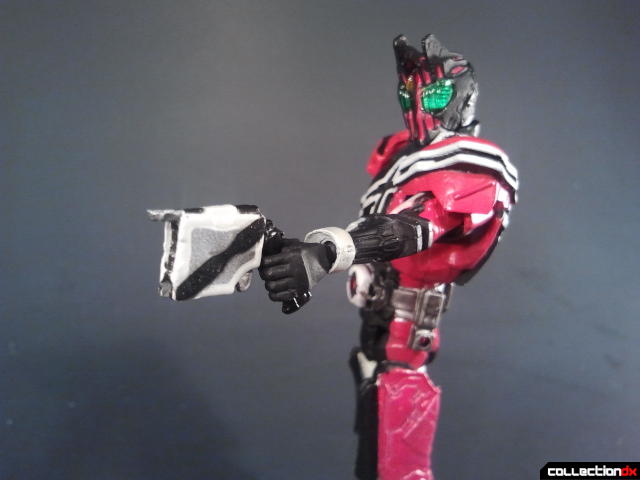 But that's alright since the main mode is the sword. By swapping out the handle with a straight one and attaching a blade to the other end, Decade can easily wield his signature sword and run his fingers along the blade like he always did for no particular reason. The sword is by far the best option for displaying the Ridebooker, and thankfully it is also the most effective as well. 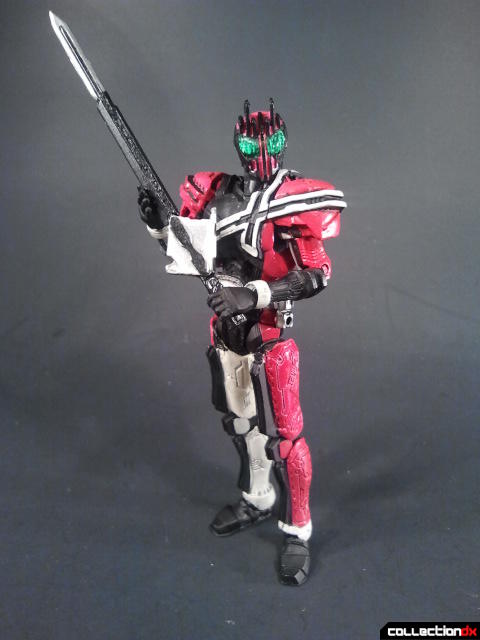 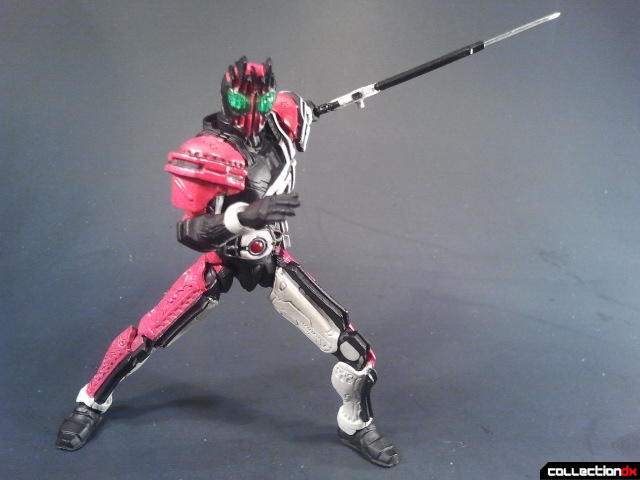 Decade also comes with an alternate head to represent his evil version. The head is easily swapped out and looks suitably menacing. Somehow this head manages to be even more angular than the regular head. 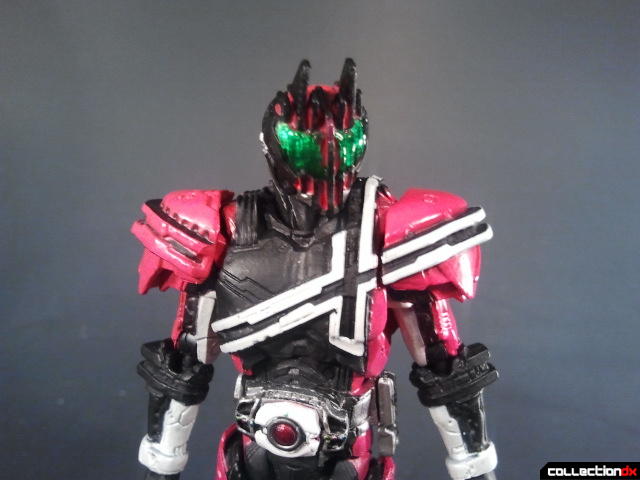 Just like Kuuga, Decade comes with this own display stand and super tiny Tamashii stage arm. The stand is very nice and really adds to this package as a whole. 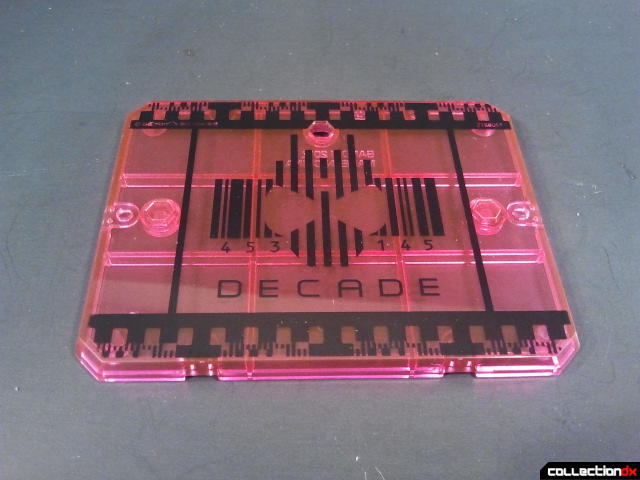 Decade is another fantastic entry in the SIC Kiwami Tamashii line. He is super detailed, well articulated, and comes with loads of accessories. Although a few things didn't pan out, such as the Rider Booker gimmick which is a bit fiddly and some unusual knees, Decade is still a solid entry that is worthy as the next figure released in this line. 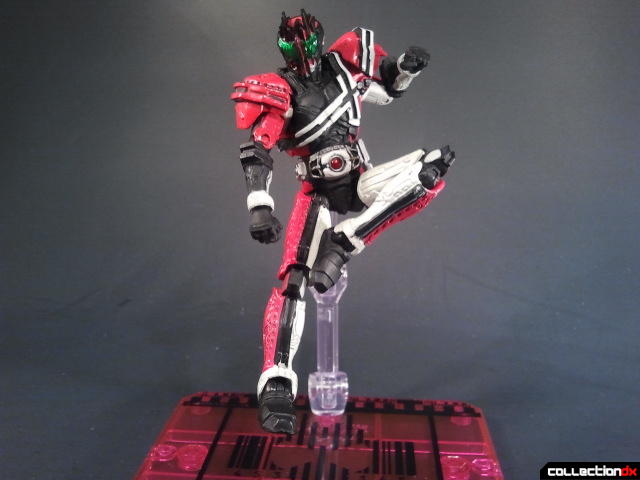 That's all that Kamen Rider Decade comes with by himself, but the real fun with this toy is in the fact that he is a traveling Kamen Rider destined to go from world to world. And thanks to his size, he's perfect to go on all sorts of nutty adventures. 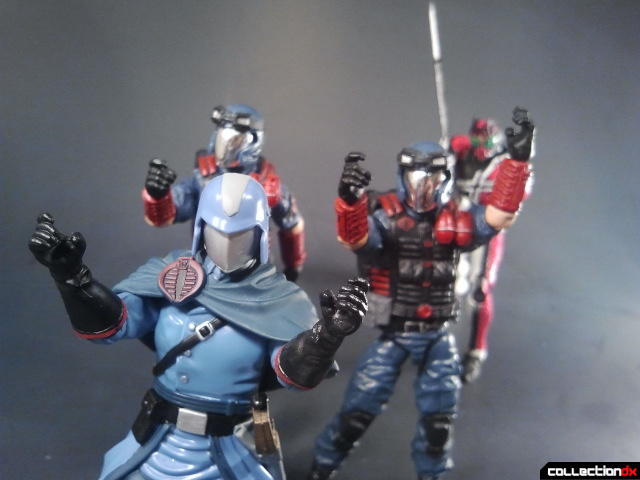 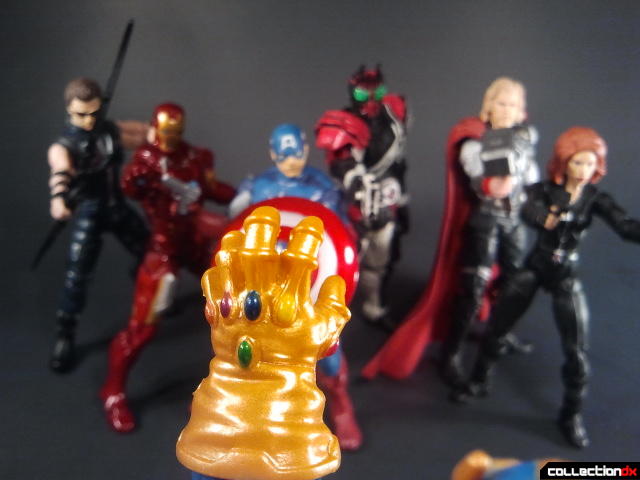 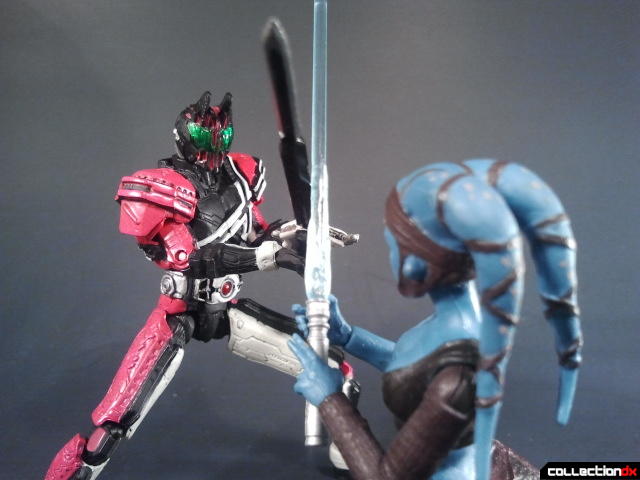 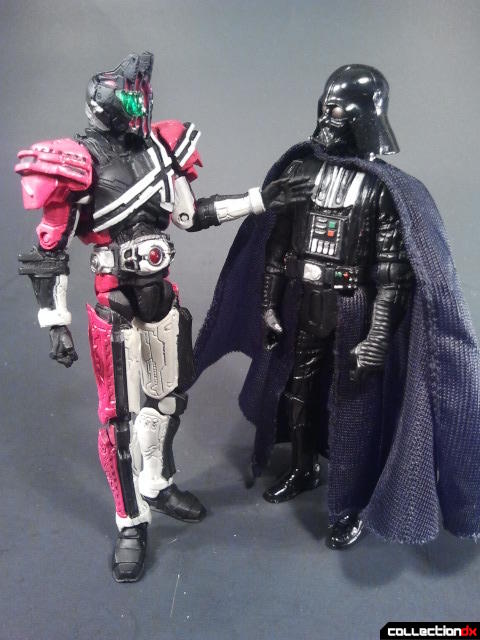 When the SIC Kiwami Tamashii line first started coming out, Kamen Rider Decade was the show currently airing. With Hibiki being the first figure in the line, a lot of us began to wonder if we'd ever get all ten Heisei Riders in this line. Now that Decade is finally out, we've managed to come a lot closer to that goal of having a complete Heisei lineup, with just a few figures missing. Now, if only we could get to the Riders that have appeared since then. 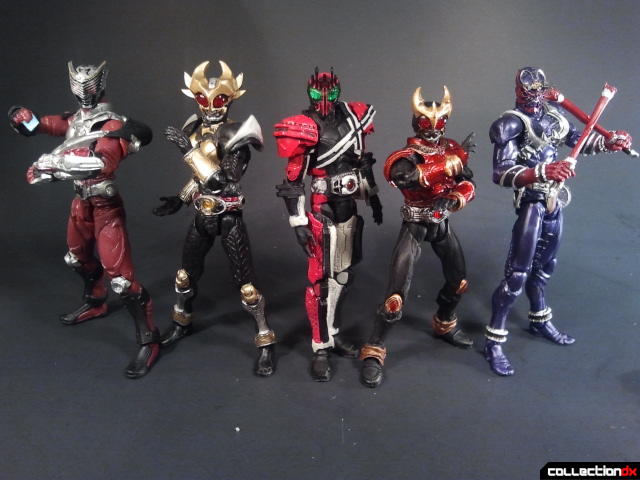 Kamen Rider Decade was provided by Tamashii Nations Bluefin. You can get yours at BigBadToyStore!